Connection to a Layered History

The Seoul Hall of Urbanism & Architecture connects with and reveals the historical moments hidden at varying levels in the site and its surroundings. The roof that acts as a visual stylobate in the Anglican Church is built by extending the stone walls of the Deoksugung Palace, and is connected to the front yard of the church to create a rooftop plaza platform. The facilities are minimised at the level of the Sejongdae-ro pedestrian pathway and the majority have been placed on three basement floors that meet the levels of the original Seoul Regional Tax Office Namdaemun Annex, the underground path of Deoksugung Palace, and the Seoul Citizens Hall. The original entrance to the underground path on Sejongdae-ro pedestrian path is brought into the building’s interior to be connected to the second basement floor underground path of Deoksugung Palace, functioning as a gate that connects the overground and underground levels. In addition, an atrium that integrates all levels (from third basement floor to the first floor) allows visitors to experience the various historical layers in the same location.

The Seoul Regional Tax Office Namdaemun Annex was demolished, bringing the Anglican Church into view and creating the plaza. The rooftop plaza platform was designed as an integrated plaza that would be connected to the front yard of the Anglican Church. The plan changed later, however, and while the roof that inclined towards the front yard of the church was cut off with a 1m level difference, a unified finishing material was used for the Seoul Metropolitan Council yard, the Sejongdae-ro pedestrian path, and the surrounding paths (Deoksugung Palace Stonewall Walkway, Seohakdang-gil) that connect to the external plaza to achieve homogeneity. By restoring the past traces to the site, which can be observed from its ground tracks, the rooftop plaza pattern was directed towards Sogong-ro of the past Korean Empire to enable a view over Seoul Plaza that would embody Korea’s modern history. Also, 1 of the 23 pillars left behind after the demolition of the Seoul Regional Tax Office Namdaemun Annex was placed in the plaza with details of the construction phases recorded on it to act as a memorial, while the rest of the plaza was emptied out at the ground level to leave space for the future stories of citizen-initiated activities to stack up.

The Connection between Aboveground and Underground

The two entrances (one oriented towards Deoksugung Palace, one oriented towards the city council building) that were located on the pedestrian path, providing a direct connection between the Deoksugung Palace underground path—which was built during the time that the Seoul Metropolitan Council building was still being used as National Assembly Building—and the building itself were repositioned at the front of the building interior. Throughout the building’s interior space, a connection between Seoul Citizens Hall, the subway station, and a whole underground space under Sejongdae-ro (currently being planned) has been established. To function as a gate that will connect the overground and underground levels, an entrance was not placed on the stairs that would connect to the underground floors, and it was designed primarily to be a semi-open space except for certain areas.

Starting from its basic two-storey space, an exhibition space always seeks to secure greater height and to integrate other floors. The large space of the 3rd basement level is an atrium that connects to 1st level above ground, while also surrounded by a high wall. The wall that is oriented towards the Anglican Church is the ‘green wall’ that brings nature into the underground space, while the wall oriented towards Deoksugung Palace is the exhibition wall, which was originally designed as an archival wall that would display the history of Seoul. This wall however had to be repurposed as the spatial programme changed to feature an exhibition hall. For this reason, finishing materials that can absorb and project sound were used. Furthermore, the wall oriented towards Deoksugung Palace is also an important wall, as it is what one faces on the way to the atrium from the building main entrance alongside the wall that the balcony spaces and interior spaces of all levels turn towards. A spatial experience that integrated the memories of different timelines was deemed desirable, and will be provided through future exhibitions that reveal the sedimentary layers of the city. 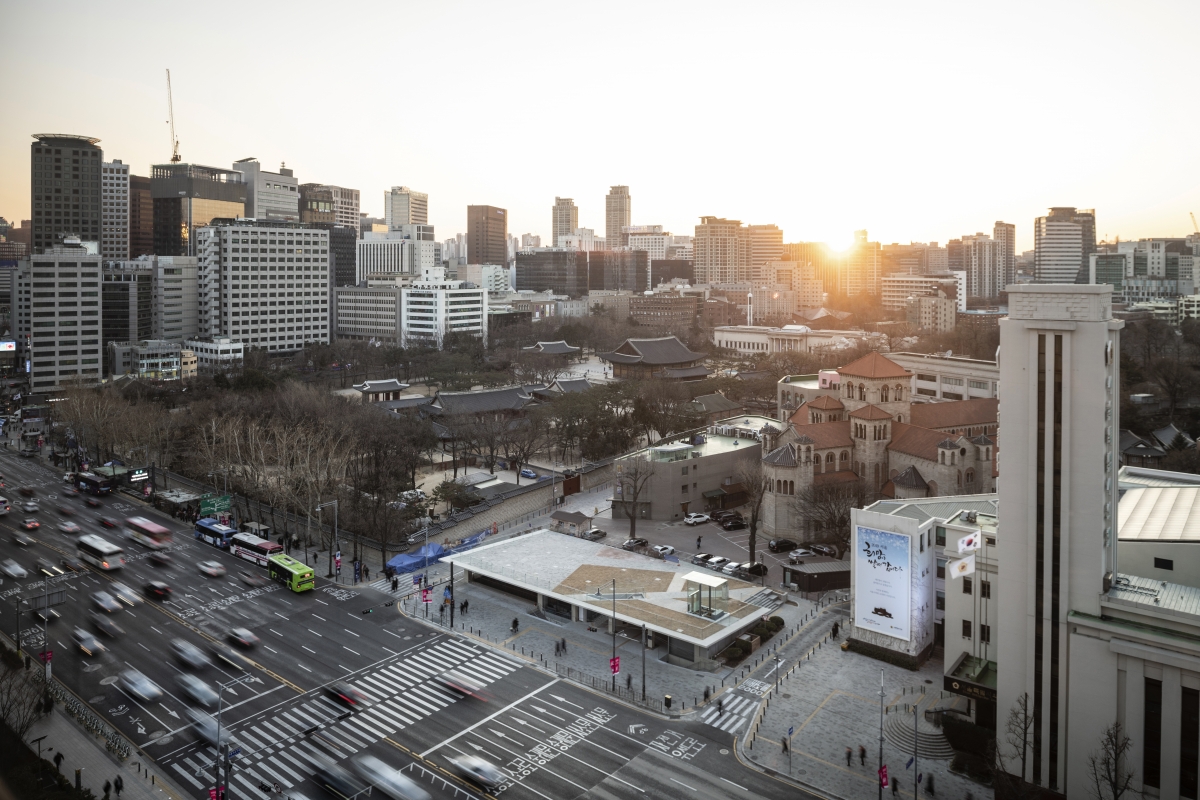 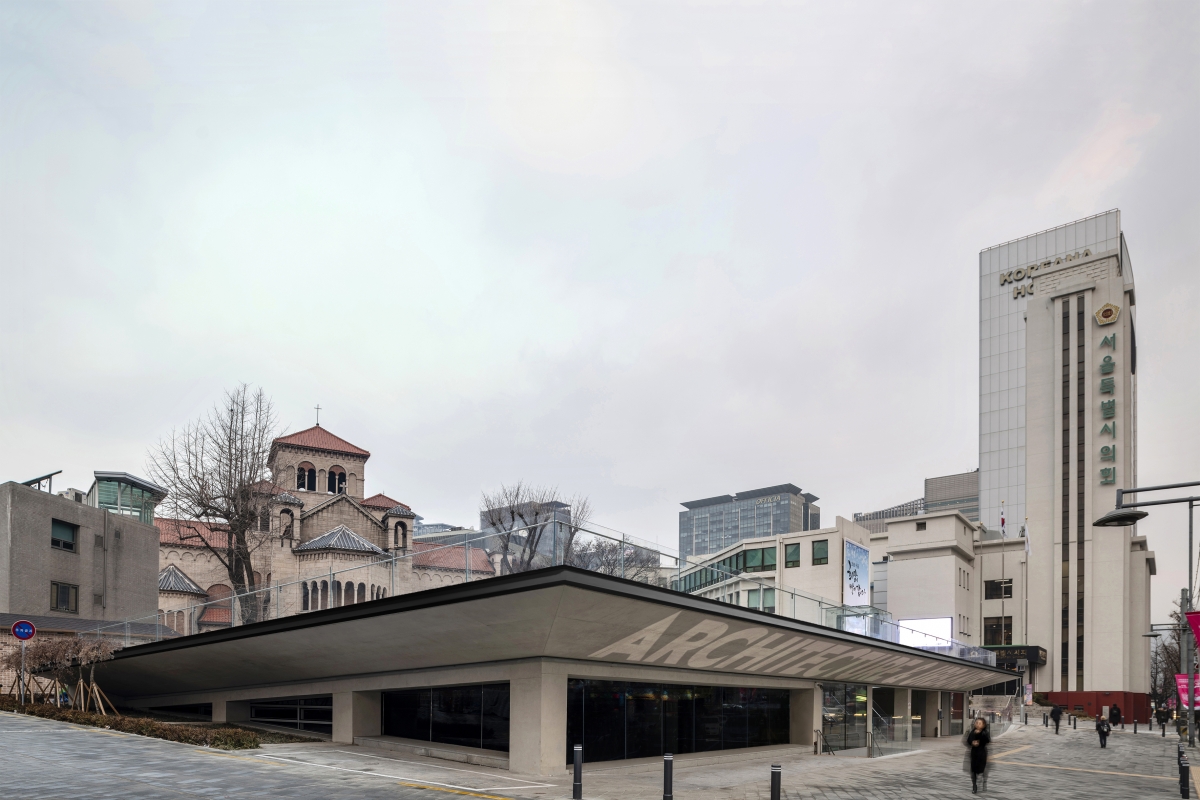 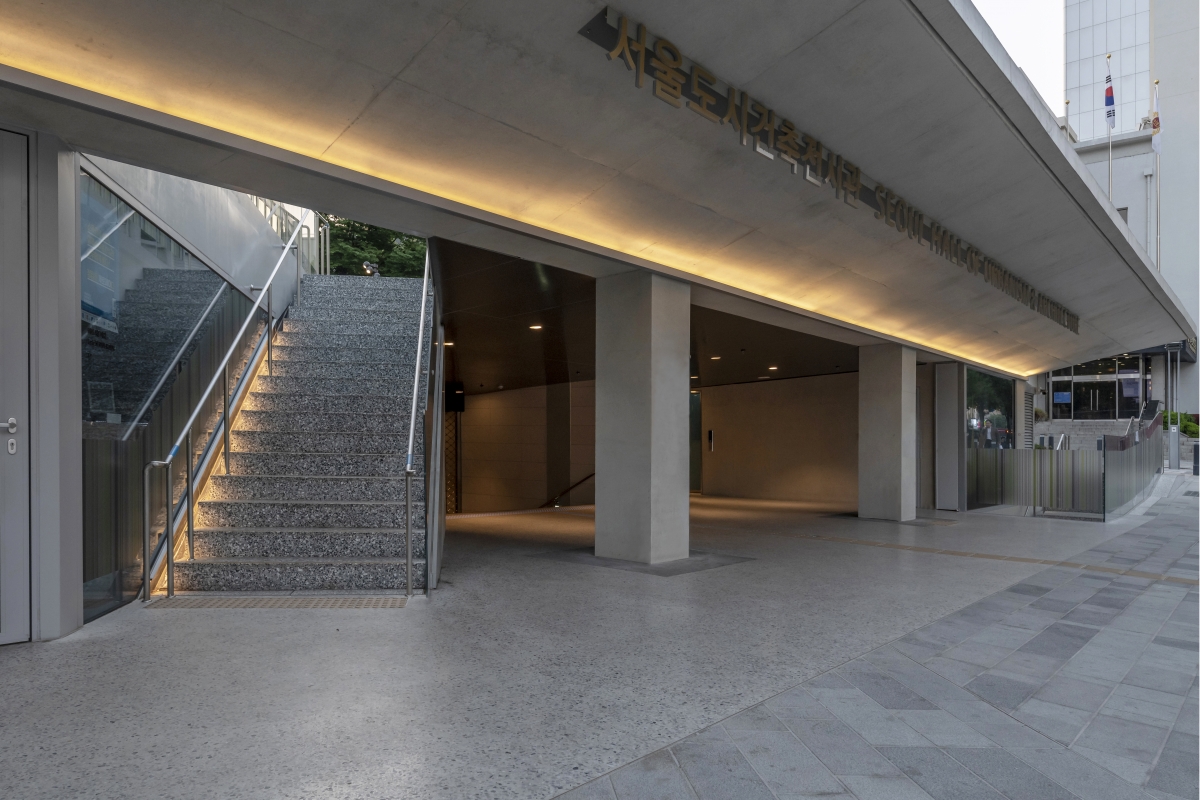 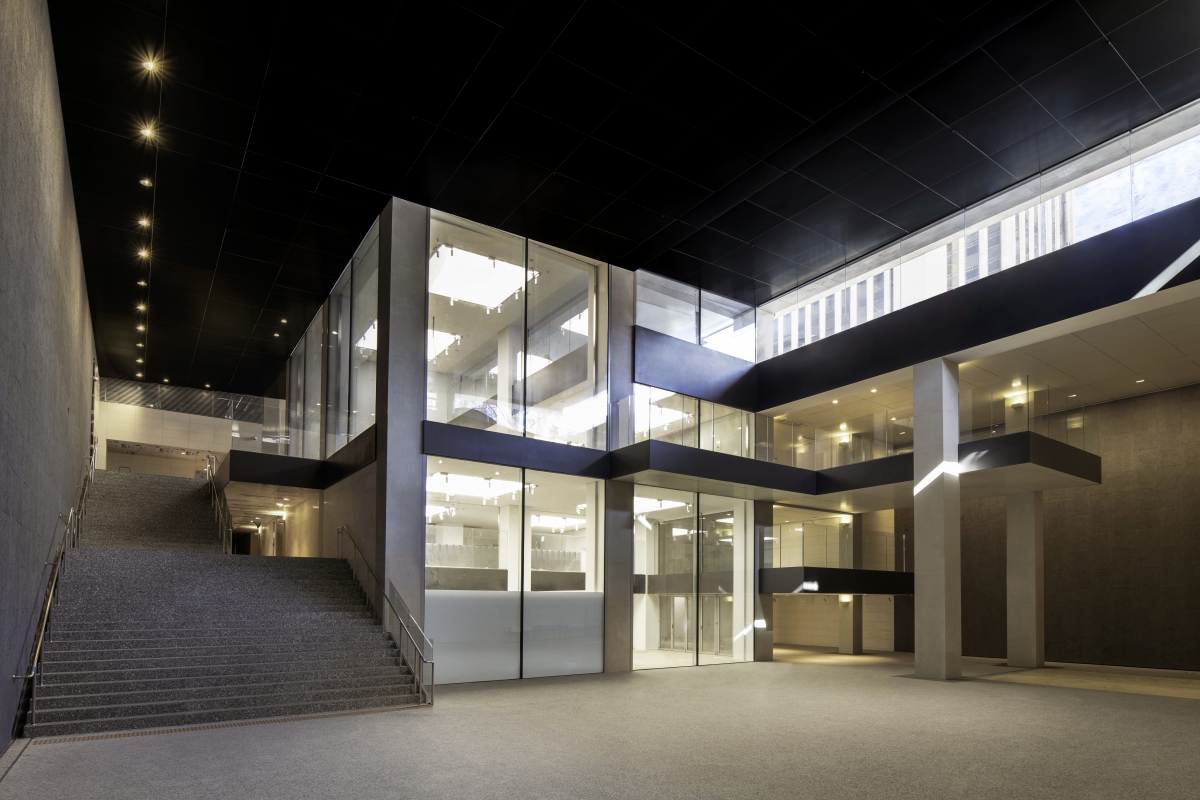 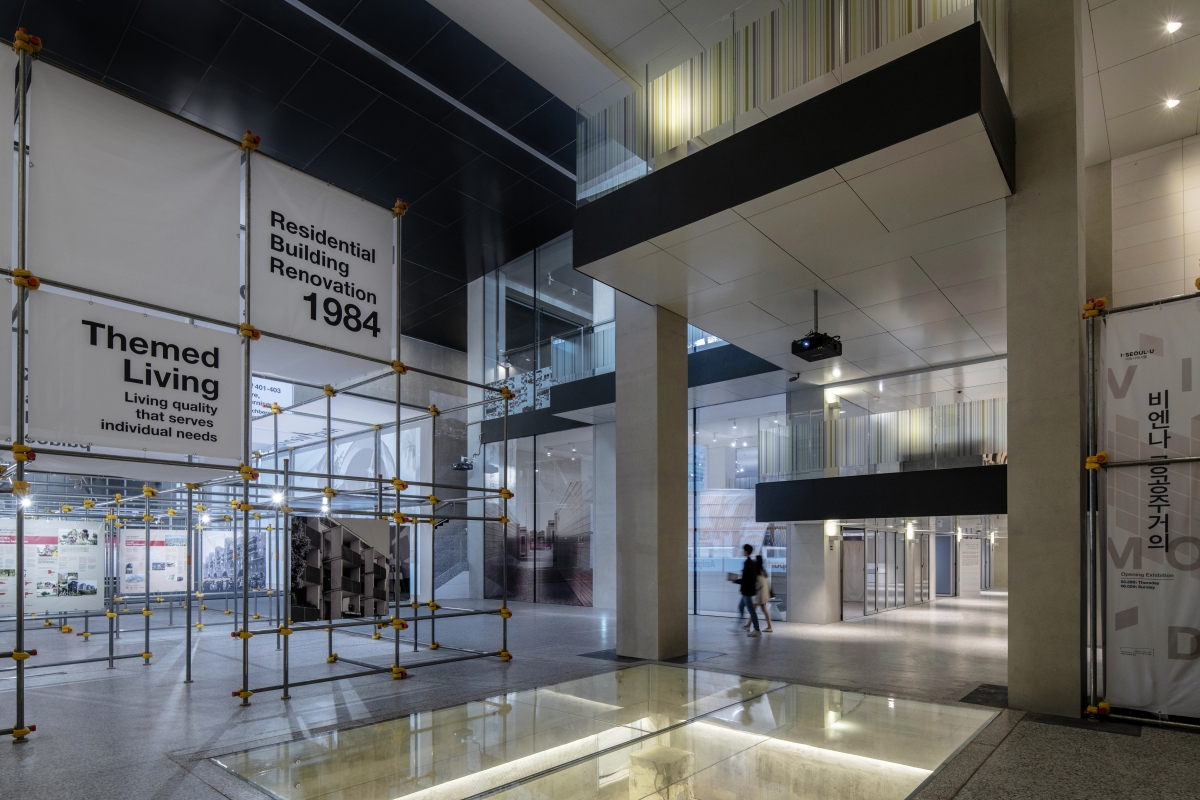 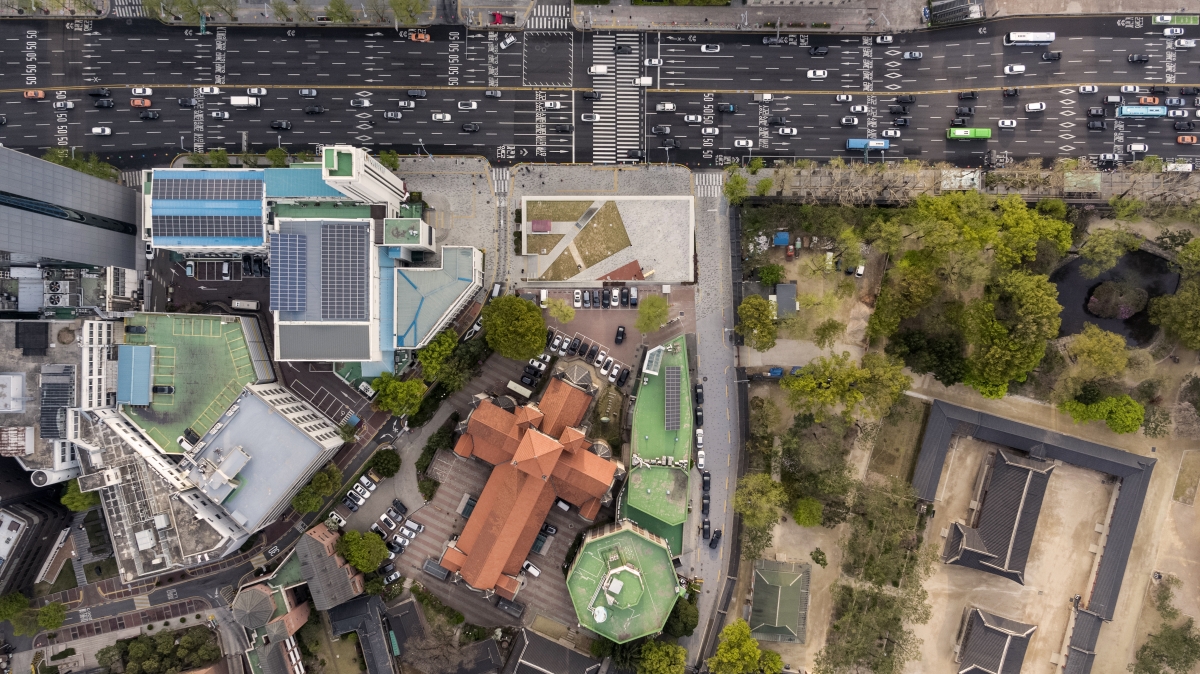 Zoh Kyungchan
As principal and founder, K-Chan Zoh, AIA, LEED AP BD+C, brings a broad range of experience to Terminal 7 Architects. Before receiving his Master’s degree in Architecture from Columbia University, Graduate School of Architecture, Planning and Preservation, Zoh studied Sociology in Korea University and Architecture in Korea National University of Arts, which formed his foundation understanding of architecture and society. He worked eight years in Rafael Viñoly Architects in NYC, where he trained as an architect through number of projects. Zoh founded Terminal 7 Architects in New York in 2015 and Seoul in 2016. Zoh designed various projects and teaches design studio in Korea National University of Arts.
LIST
bookmark_border
favorite_border
132 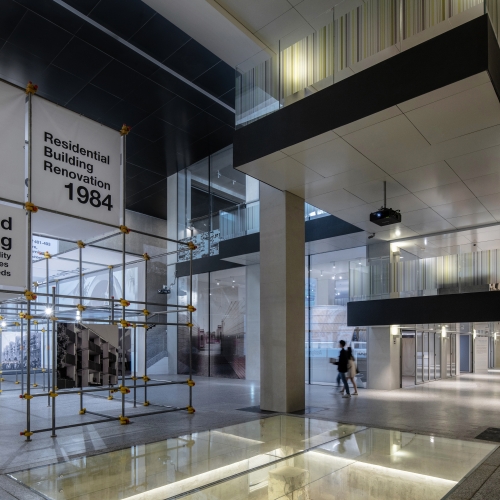 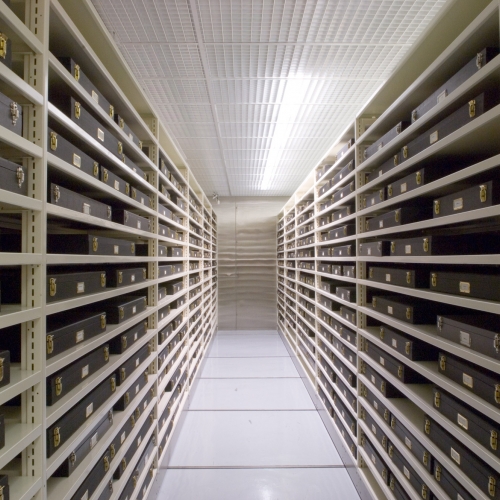 [Interview] Hear From the CCA: The Museum is Not Enough 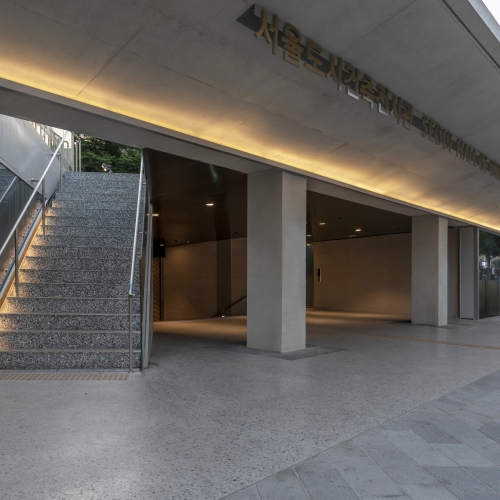 Architecture as a Background and as Internal Space