A Warm Space for Students and Residents

A School within Local Society

A school has always been perceived as a space dedicated to educational activities for the benefit of students. However, the recent phenomenon of a declining number of students has necessitated a more creative approach to the improvement of the current educational infrastructure. With regards to this, the school educational infrastructure is currently looking for ways it can transform various educational spaces into spaces for the benefit of the region. The eastern building of Banghak Middle School was the result of a design competition project, raised to remodel the leisure space of an educational facility and change it into a cultural and recreational space for students and local residents. The classroom that was used solely as a class space for students for more than 30 years was turned into a new space that includes a theatre, café, art and sports room, and music practice room for the students and local residents.

Composed of three buildings that surround the schoolyard, a well-positioned landscape placed at its front, and the Surak and Bukhan mountains forming its background, Banghak Middle School is situated within a beautiful and eye-catching scenery. What is noticeable in this eastern building, priot to remodeling, is its abandoned and overgrown backyard. Although the backyard of the eastern building, which was surrounded by multi-household residences and being used as a traffic route for maintenance vehicles, was a dirt yard filled with overgrown weeds, it still had the potential to function as a shared community space for the school and regional society at large. Small public design competition projects, however, are always underfunded. Hence, it was important to observe, discover, and focus on the design subject. The backyard of the eastern building of Banghak Middle School was a starting point. 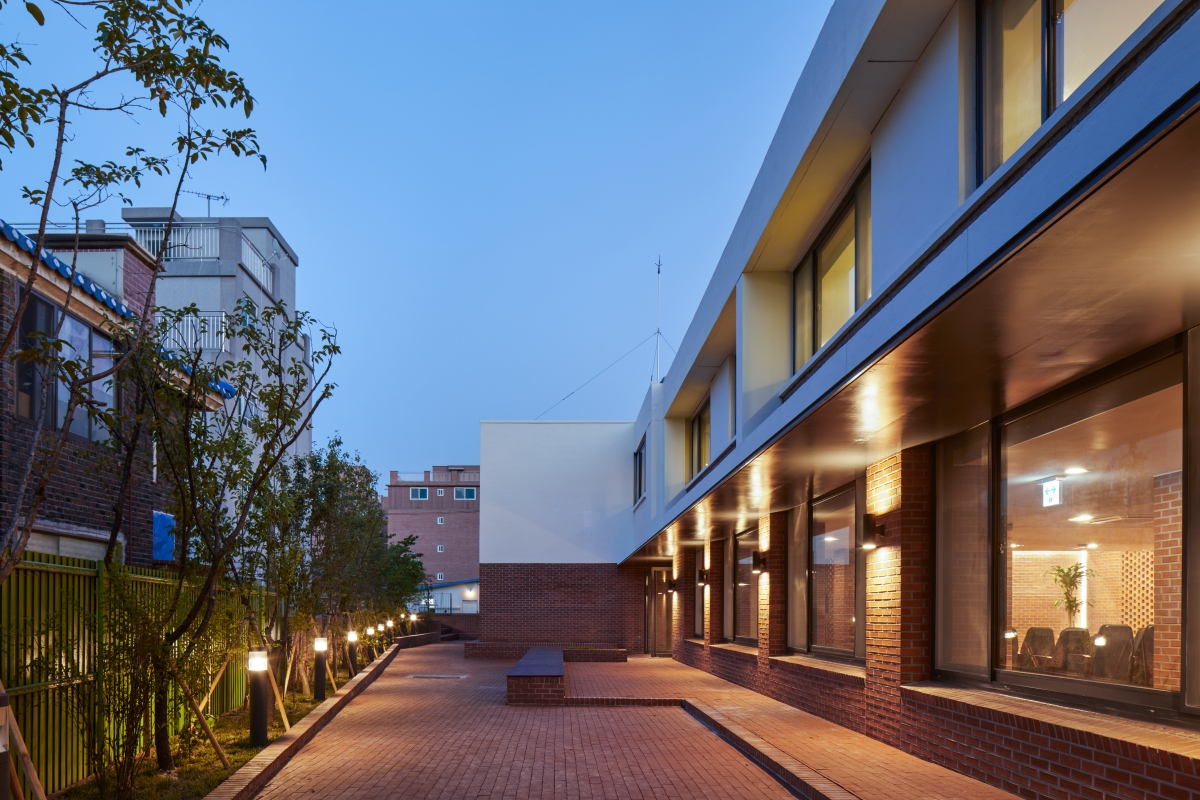 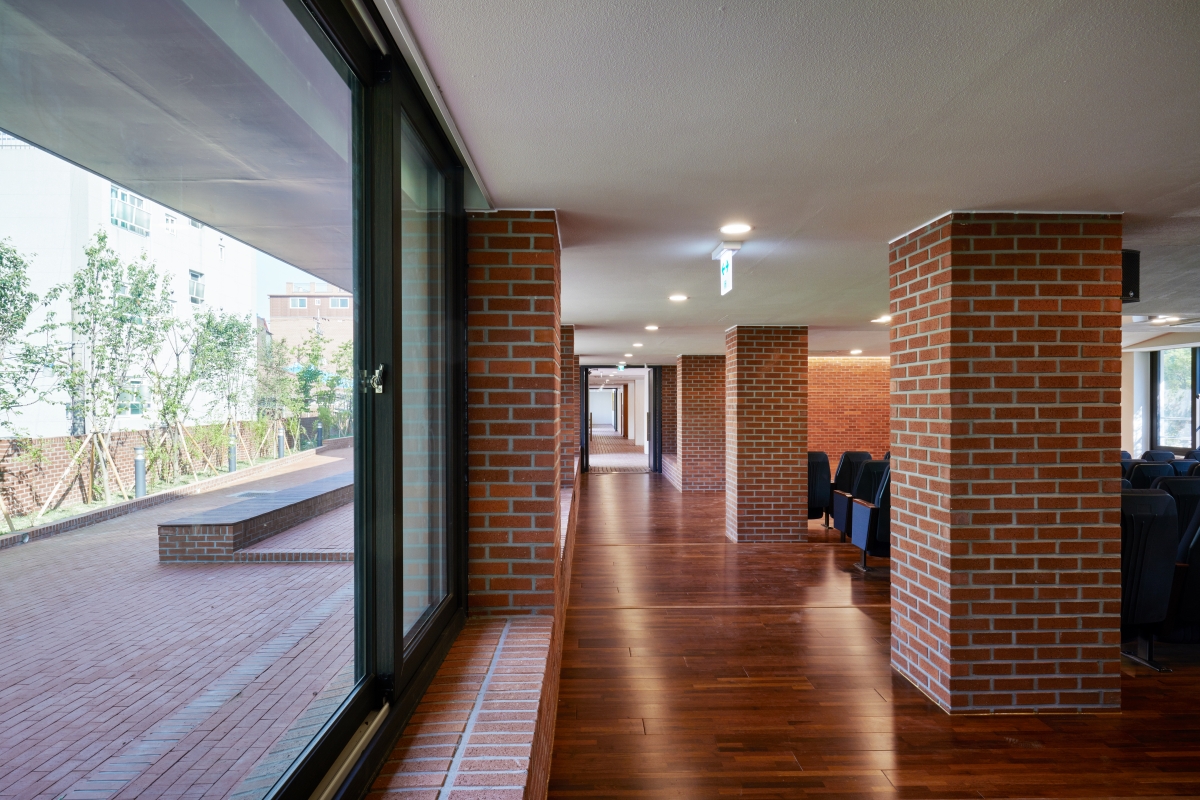 First, we planned a remodeling project that would not override the natural landscape characterised by Surak and Bukhan mountains beyond the simple grey wall next to the schoolyard. In order to make most use of limited funding, we decided to avoid a complex façade while ensuring a change in experience by making the interior visible from the windows. We removed the unused warehouse in the backyard to secure space for a yard where one can relax and enjoy the landscape. As I was contemplating a new look for the abandoned backyard, the image of a pyeongsang (a low wooden bench) rose to mind spontaneously. Although a pyeongsang is a concept — almost a trite metaphor — that has been rather commonly referred to when describing a community space, we thought that a warm and welcoming yard equipped with several pyeongsang could become a place of exchange for students and residents to come and rest. Furthermore, because the standing yard is adjacent to the music practice room in the building, it can also accommodate small-scale performances. As an architectural instrument, we also designed a window that extends to the floor by removing the lower end of the corridor windows. Simultaneously, we evened out the level of the lower yard, which was about 40cm lower than the building interior, to match the interior level and to enhance the connection between the interior and exterior. We also used the same bricks as the floor material for the interior and exterior to make the transition between them smooth and natural.

Our focus for this project is quite detached from a certain architectural form or a major discourse. Instead, we simply wanted to build a place that would act as a background, where short episodes of daily experiences of the students and residents can accumulate and grow. 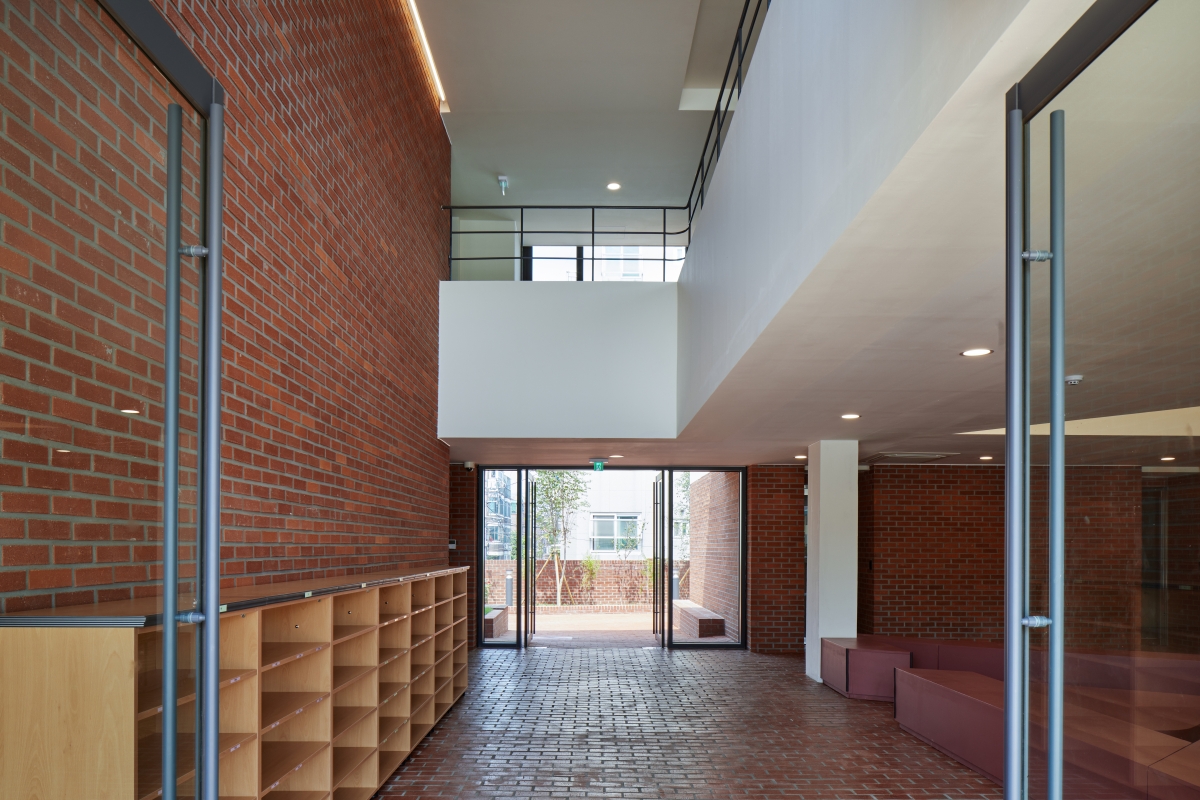 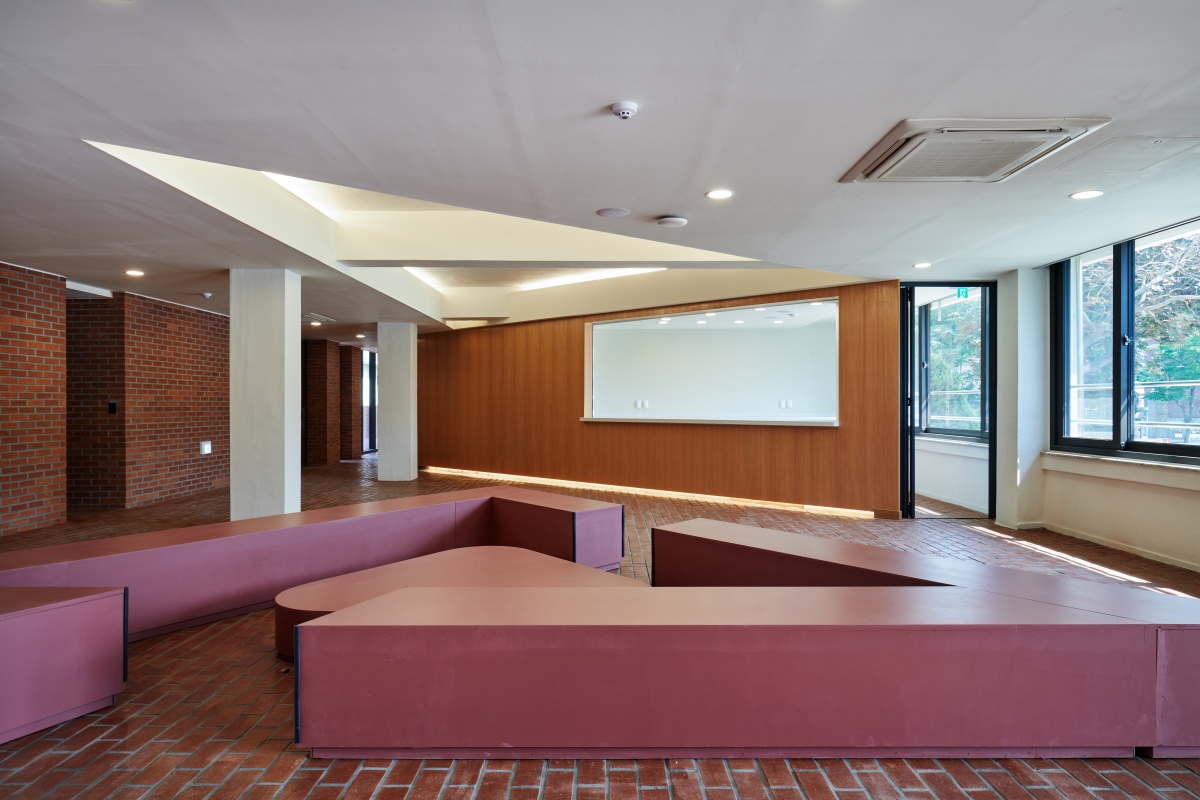 Changes to the Grid

The grid of the Rahmen-structure classroom and corridor formed by reinforced concrete pillars and beams is like a representative symbol of a modern school facility. The one-sided corridors of terrazzo flooring are rigid and exclusive, but students come to make countless memories in these corridors. The outdated grid system of schools is also a daily structure for the students. We installed a lobby, a hall, an open vertical space, and a space to sit and rest at the centre of the long corridor to allow for a moment of respite within the grid space.

For the connection between the external yard and the schoolyard, red bricks were used in both the interior and exterior of the first-floor corridor. To let the second-floor corridor give off a warmer vibe, we changed the flooring to wood and installed an open space at the center of the corridor and windows at both extreme walls. The first-floor lobby and the second-floor hall share an open space that is as big as half the module. While the original building could only be vertically connected through the staircase, the small-sized vertical space now allows warm light to penetrate deeper into the building. Initially, it was not possible to create an open space due to area restrictions set by the design competition, but with support from the competition committee and cooperation with the school and regional committees, we were able to turn a portion of the corridor into a bright space where one can stop by to enjoy a moment of rest. 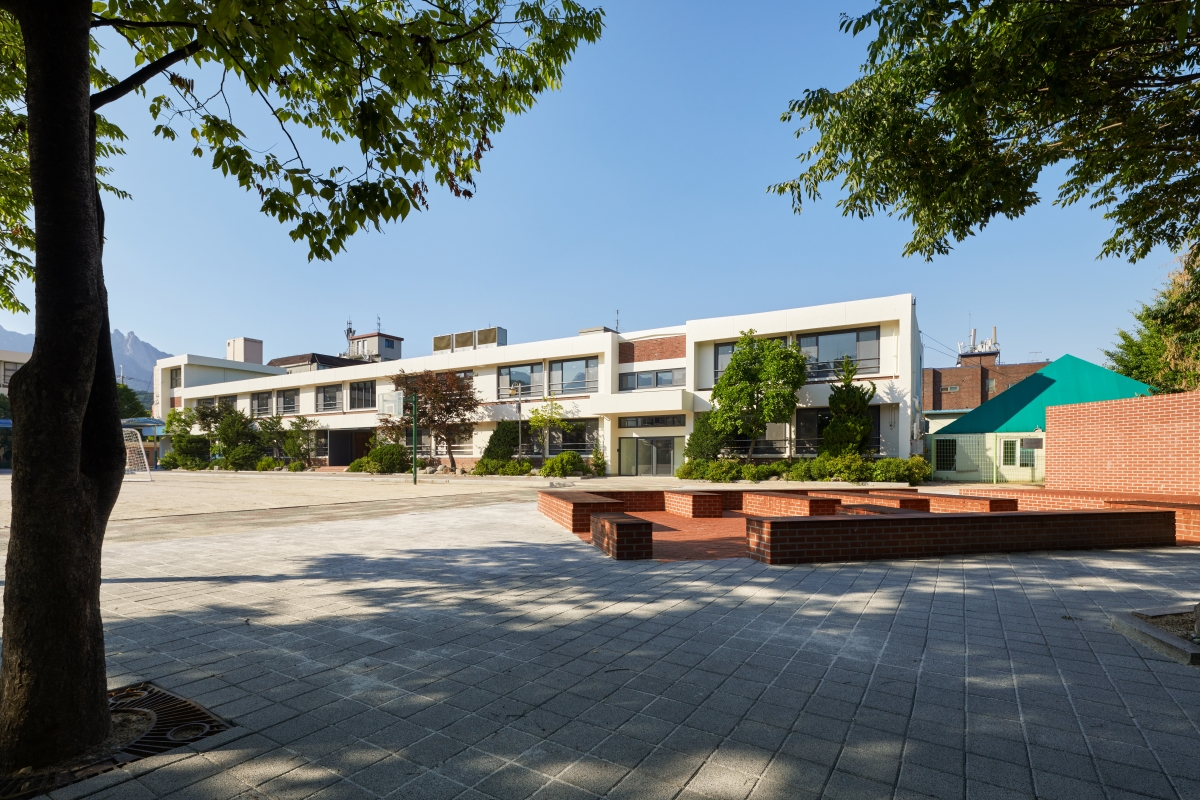 Hwang Jongho
Hwang Jongho graduated from undergraduate and graduate school in Department of Architecture of Seoul National University and trained architectural practices at Heerim Architects & Planners Co., Ltd. and OCA. Now he is the principal of Batang Architects.

Kim Dujin
Kim Dujin studied architecture in Seoul National University and graduated. He was awarded JEAN PROUVE Scholarship from Ambassade de France en Corée in 2011. He is now the co-principal of FL Architects.

Kim Jungsub
Kim Jungsub graduated from undergraduate and graduate school in Department of Architecture of Seoul National University. He is the co-principal of FL Architects and licensed architect in Korea. He is also an adjunct professor of University of Seoul and a public architect of Seoul.