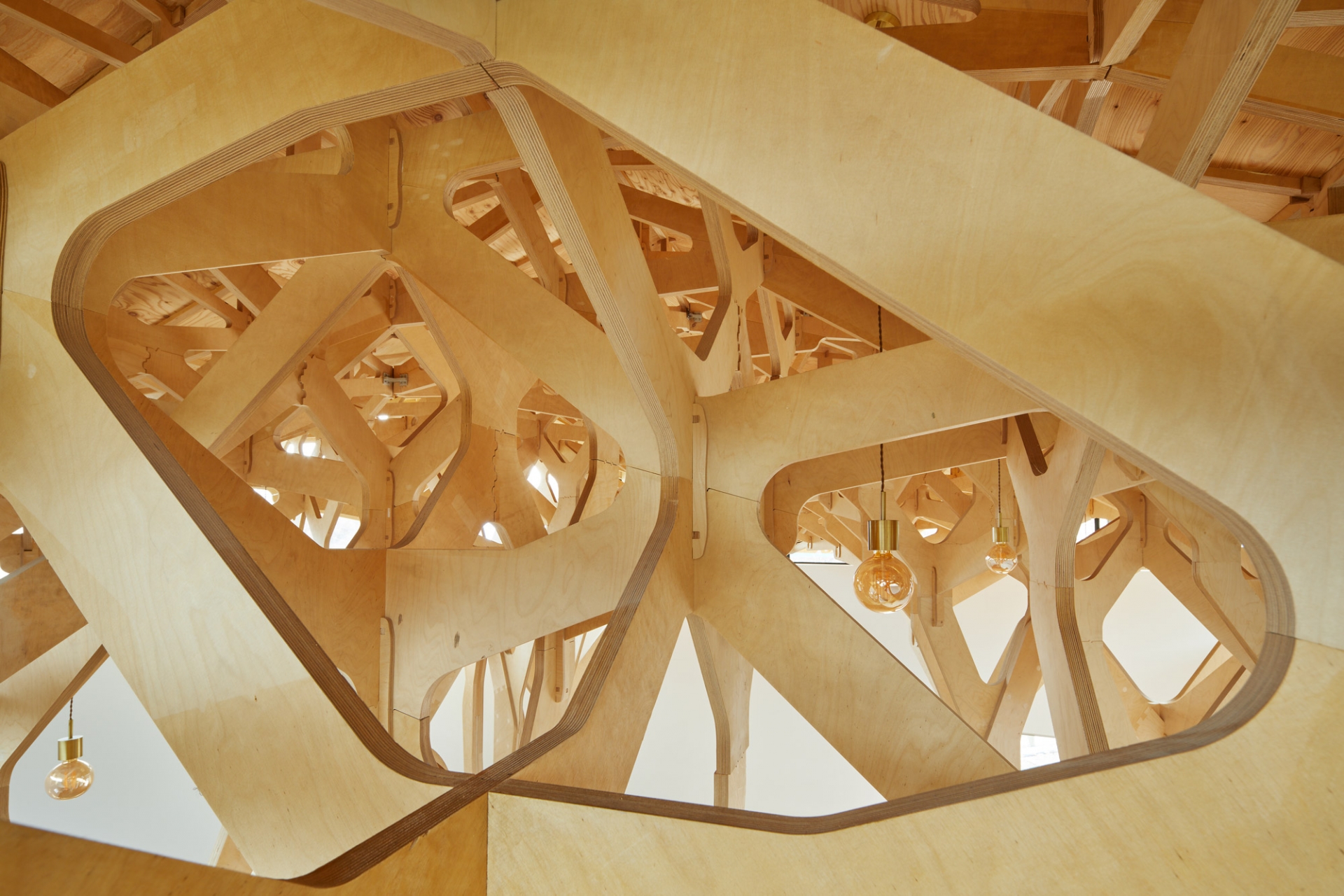 In this context, Tree Series has three aims. The first aim is a formative freedom. The traditional method of joinery has developed in many diverse ways in each country across East Asia. Nevertheless, the formalism of traditional architecture hindered its freedom to be more diverse. However, the use of parametric tools, such as the Grasshopper, supercede the morphological limitations previously imposed on the system. The second aim is the consideration of the structural performance. Originally the system was invented for a structural reason, and it is important to retain that original intention. In addition, the quality of the structural performance will feature as a criterion to determine which of the diverse forms would be most appropriate in achieving the first goal. The structural analysis achieved by the Grasshopper plug-in, Karamba, can result in greater time efficiency for mockup tests and calculation. The last aim is the development of new joints. In wooden structures, a joint is the most important component that receives both tensile and compressive forces. Th project  wanted to attain a sufficient structural performance through friction, without using additive elements such as metal joints and bolts.

The House: An Architectural Fantasy

The House of Three Trees is the realisation of an architectural fantasy; the fantasy explores an alternate reality in which several historical events of the past century have not occurred. What if timber resources had not been depleted in the late Joseon Dynasty of Korea throughout the 17th to 19th centuries? In spite the exhaustion of timber stocks, what if globalisation had begun earlier and had introduced the affordable import of wooden materials from Russia, Canada, Northern Europe and Japan as today? Finally, what if the reinforced concrete structure had not dominated the architecture of the 21st century? Then, the timber buildings of East Asia may have continued to evolve. These premises afford an opportunity to return to the culture of timber architecture upheld for at least 1500 years, and may lead us to further experience a new architecture.

This house marks the rebirth of East Asian timber architecture, which disappeared 100 years ago. More specifically, the project is the reinterpretation of iconic wooden bracket systems ubiquitous in the East Asia timber architecture. Known as ‘Gong-po’ in Korea and  ‘Dougong’ in China, the system was the most symbolic part of East Asian timber buildings from both a structural and aesthetic perspective. The house criticises the application of traditional buildings today, which can be superficial, merely imitating traditional expressions in architecture, or too abstract. Instead, the house redefines the virtue of East Asian timber buildings from a tectonic perspective, which is the combination of structure and ornamentation. Moreover, the house serves as an example of how contemporary technology, such as design computation and digital fabrication, can reinterpret traditional architecture. Technology can give East Asian timber construction the potential to evolve in a new direction.

Three Trees and Becoming a Forest

The three trees within the house create an interior space, responding to the hexagonally shaped building footprint. Three trees as anchoring points are also the minimum requirement to support the roof. Apart from the structure, the wall enclosing the house was required as  insulation against the cold winter in Korea, as well as to tailor the visual experience while inside the space. As a result, those inside the space experience only an enclosed space dominated by the tree structure, yet they still have a curated view to the outside through apertures. The change in time can be sensed through the sunlight’s movement as it filters into the gap between the roof and wall. It resembles the sunlight falling into a forest. In this way, the trees become a forest.

The tree structure of the house is composed entirely of wooden joinery. The construction method, without using additive fasteners such as nails, is not only intended as a means of following a traditional methodology, but to show the sheer strength of engineered timber as a structural element.

The footprint of the house follows in the erratic shape of the site. In spite of its irregular hexagonal form, the house can follow an order generated by algorithmic tools. The order of these tools sets the guideline for placing three Trees. Algorithmic tools again guided the design and analysis of the complex form of the three trees. The 4006 pieces of wooden elements generated to form the three trees resulted from the optimized numbers for construction efficiency and logistics.

In addition to designing a building’s form, typical rural houses around the site inspired the roof design and material choice. Rural houses built in the 1970s and 1980s, which were designed by construction standards imposed by a government, have flat roofs that result in poor drainage and rainwater accumulation, which pose a serious threat to the  water-resistance of homes these days. The voluntary solution to rainwater leakage is to cover an existing flat roof with a pitched roof made of sandwich panels.  This spontaneously-devised roof has inspired the design of a thin and floating roof from the notion of lightness. Also, the use of asphalt shingles, known locally as cheap materials, helped to emphasise the lightness of the roof.

Moreover, other commonly used materials in the rural areas of Korea were selected for the exterior finish of the house. These include plywood and plastic panels on the exterior walls. Most particularly, polycarbonate corrugated panels, for the exterior wall finishing material, are often seen as the typical cladding of warehouses and greenhouses. This translucent panelling subtly reveals the plywood finishing inside and, similarly to the roof, gives an ethereal lightness to the building which simultaneously contrasts from adjacent houses and recollects other structures common in the region. Functionally the panels generate an additional air layer and increase the performance of insulation performance, as well protecting the inner plywood from rainwater. 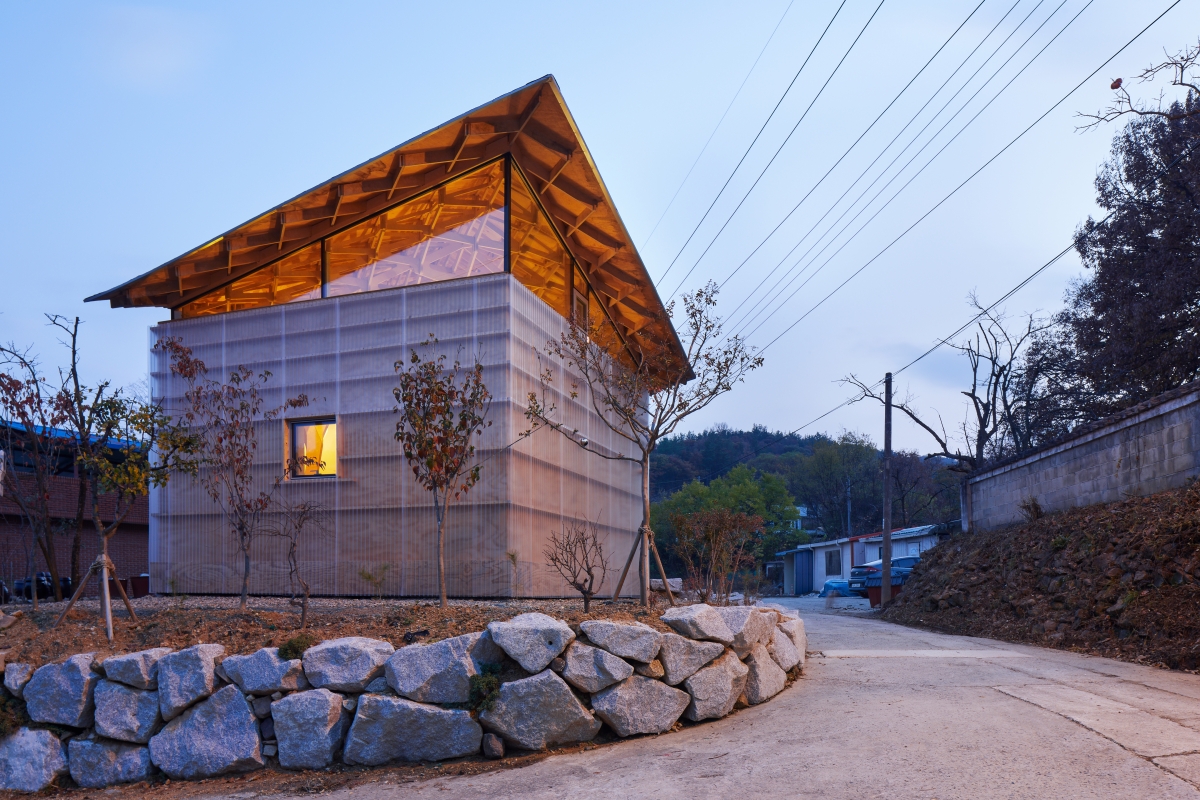 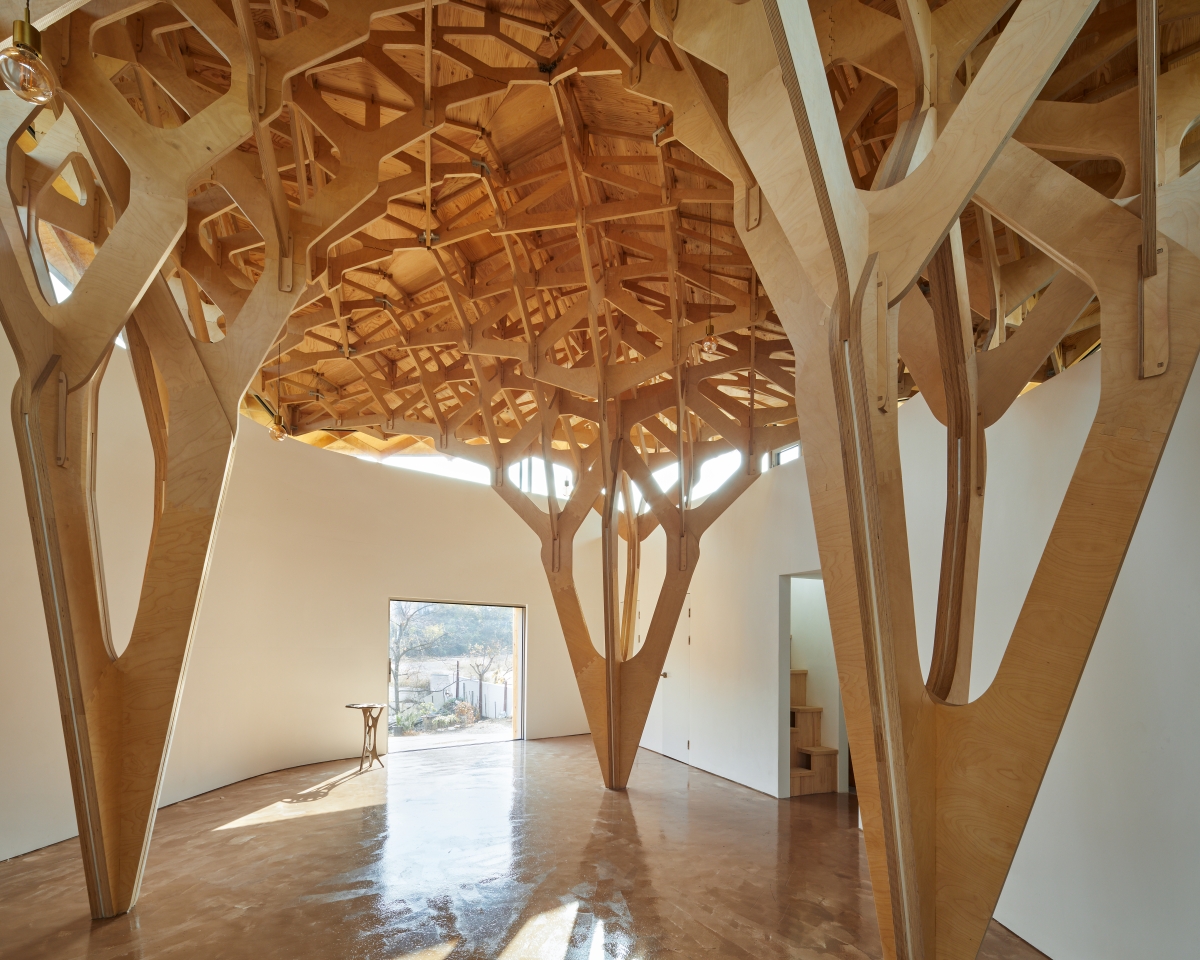 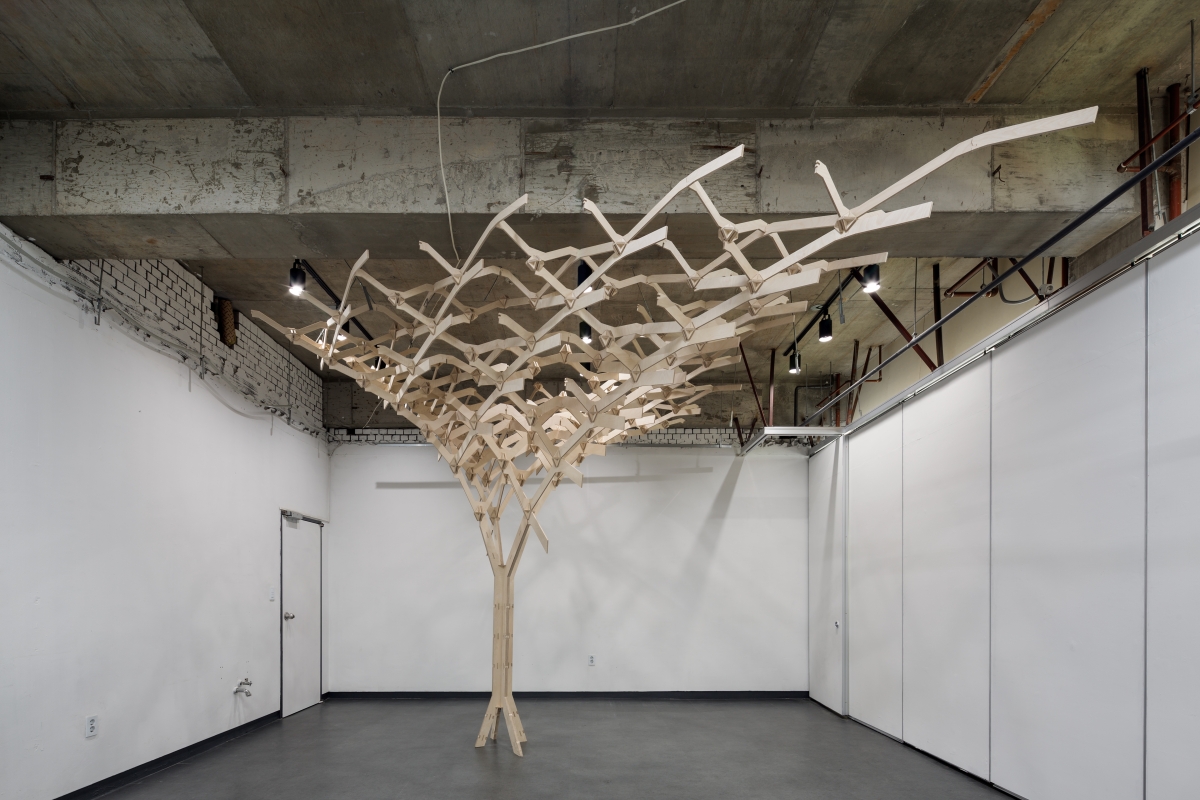 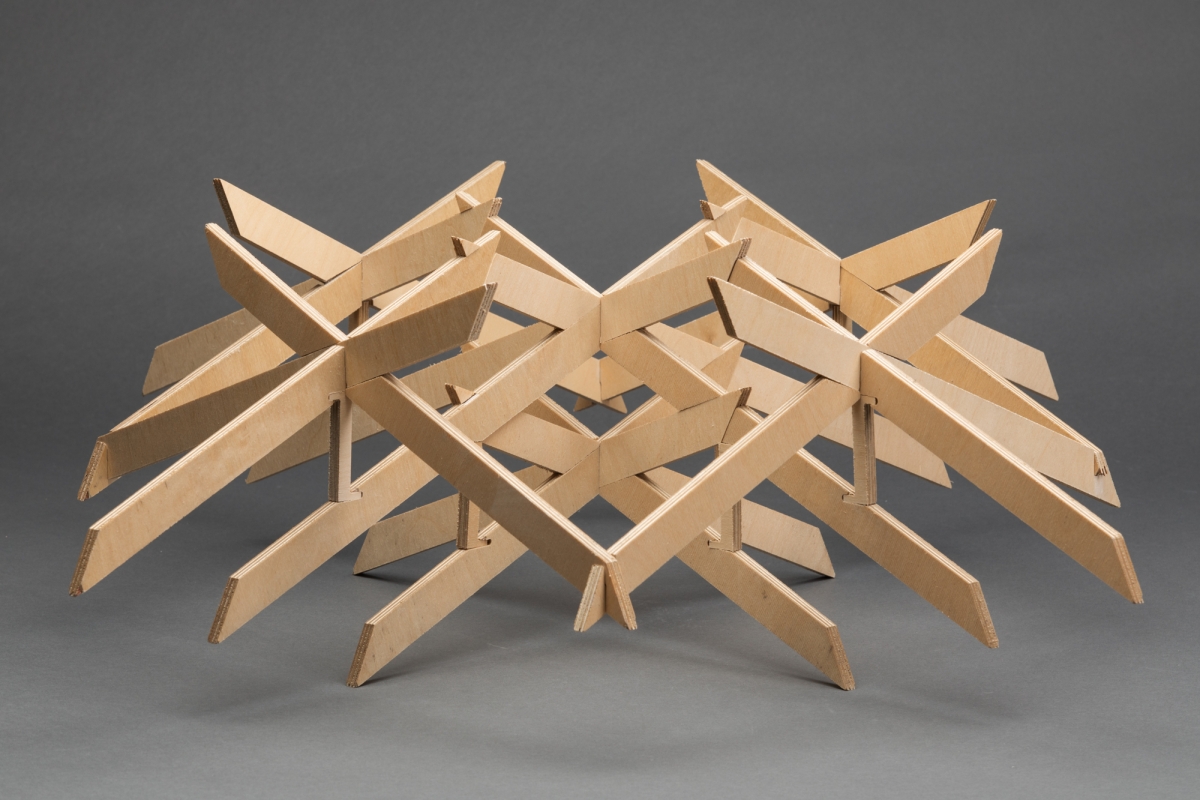 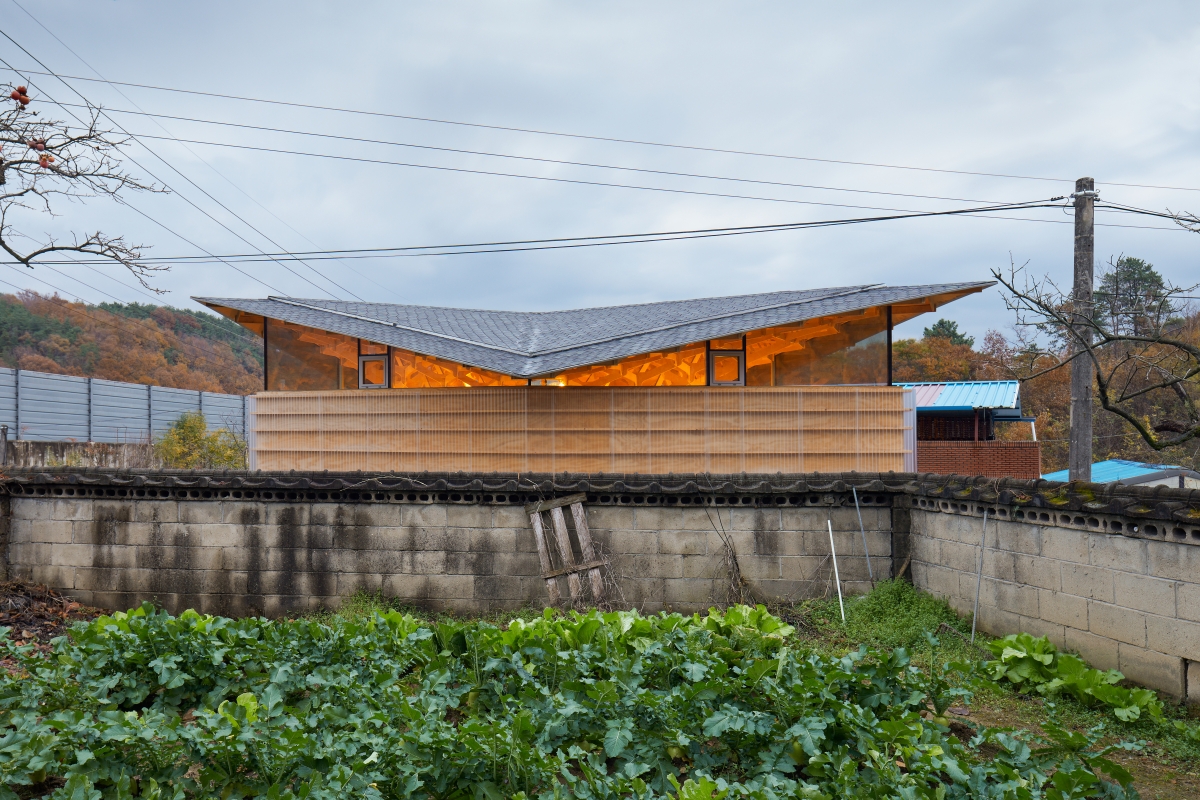 The House of Three Trees from rohspace on Vimeo
Architect

Jae K. Kim
Jae K. Kim is an architect, a researcher, and an educator. Currently, he is a professor of architecture at Hanyang University and the principal of JK-AR. He studied architectural engineering at Hanyang University in Seoul, and later architecture and urbanism at the Massachusetts Institute of Technology. Jae has been awarded Imre Halasz Thesis Prize for excellence in his master’s thesis from MIT in 2012, the Gold Medal from American Architecture Prize in 2016, and the 2nd Prize from Korean Wooden Design Awards in 2017.
No.620 July 2019 architecture house Tree Series wooden bracket system wood structure traditional architecture polycarbonate
LIST
bookmark_border
favorite_border
223