​The client, who regards Hwacheon in Gangwon Province as his second hometown, commissioned a small house in which he could spend the rest of his life. The site, where the Nam River in Hwacheon passes so close it feels as if it could be caught by hand, is surrounded by a hill at the southwest. In the northeast, the site stands on a bridging point between the Nam River and Seong Mountain in Hwacheon County, where they are visually connected. The client, who served for many years as a civil servant in Gangwon Province, had experience of commissioning buildings and projects, such as the Park Soo Keun Museum. However, he never intruded upon the design process, except to supply a programme brief and the concluding debrief. The brief for this project was focused on separating as well as connecting the family members, who pursue different lifestyles, and the members of the client’s son, who often visit the client on weekends. 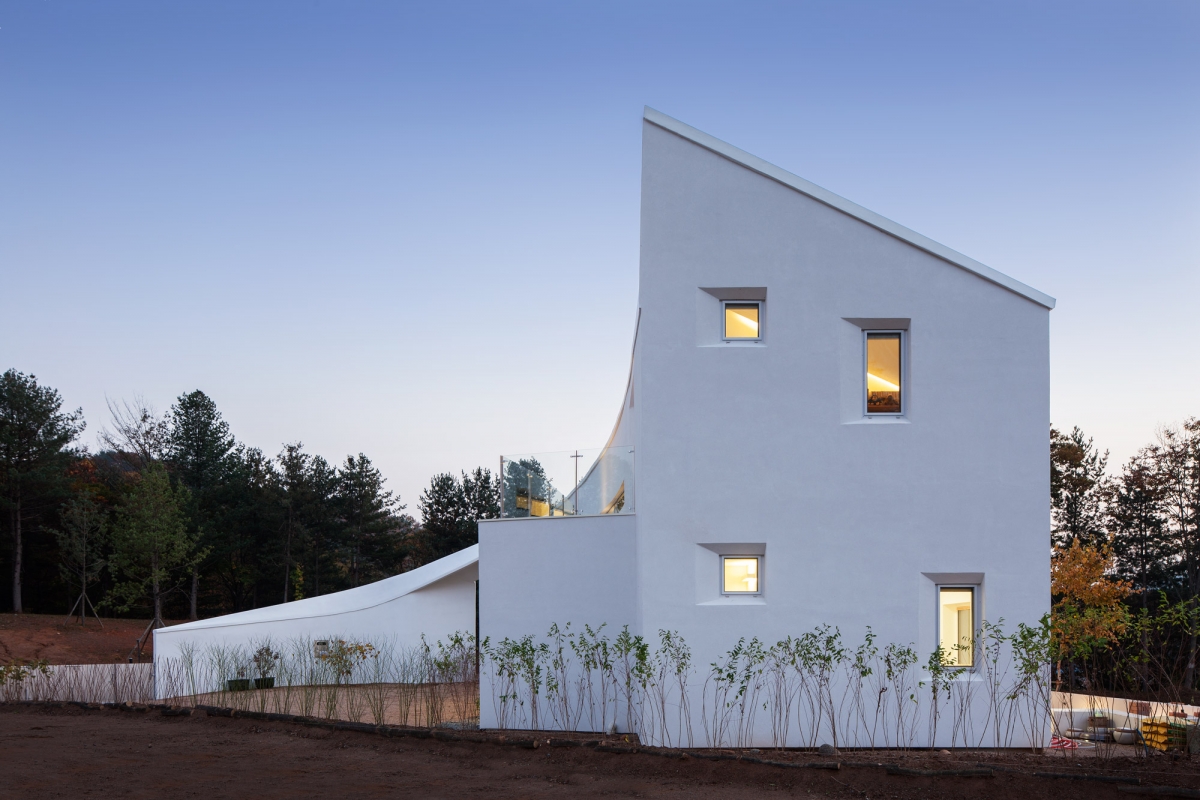 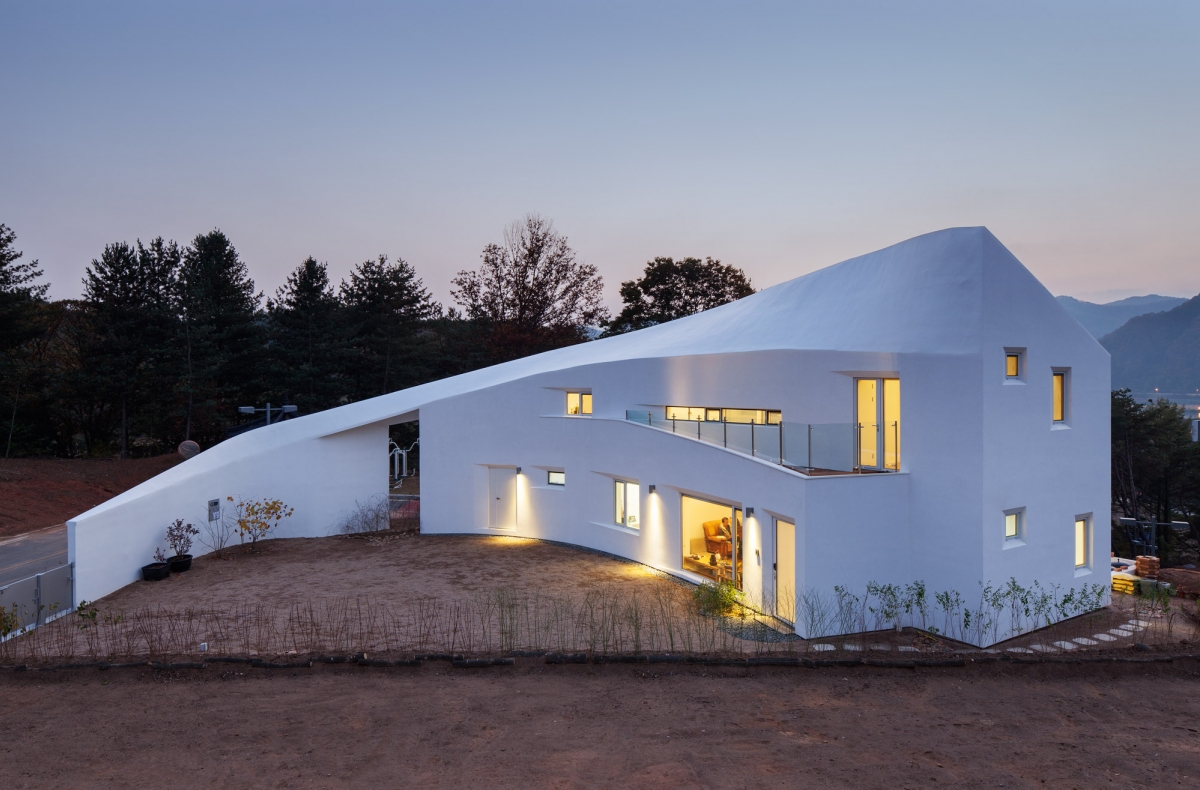 First, we studied different ways of arranging the space so that it would actively absorb light from the southeast and the northwest. Of the family members, one wished for more light in the mornings, while another wanted more light in the afternoons. Discussing such preferences marked the beginning of the process that sought to carefully consider the overall programme and disposition of the project, the nature of separation and connection, which eventually led to finalising the design of the house’s interior and exterior spaces. There was an issue regarding the omission of a fence around the house, so we suggested a hedge as a sequence that would continue from the house: the gate that began as a single line is split into two lines to shape an atypical gable roof. The gable-shaped pinnacle was designed as a workplace for those family members who work from home. The line that began with the gate reaches the ground and begins to create space. The starting point of the space lies with unique flow within and without the client’s treasured house, while also serving as a naturally-formed hedge that prevents any potential infringement of privacy from the main road situated next to the house. The gradually ascending line marks its end by completing the atypical gable-shape, and the widest part of the space thus becomes the residential space. This large line forms a C-shape, creating an ambiance that gently embraces the guest arriving at the entrance while also allowing the person indoors to visually check the incoming car. Above all, we intended the house to act as a visual link that would connect the mountain (Seong Mountain), the water (Nam River), an artificial mountain (the site), the yard (the site), and the hill.

The scenario for the space was planned according to the topography of the land, which has its lowest point in the northwest. The sunken terrace that begins at the lowest point is a dedicated spring and summer space for the client, where he can install an outdoor fireplace and spend quality time with his friends in nature. Also, based on the topography, a change in levels was planned between the kitchen and dining space. Then the living room – the largest space in the house, serving as the heart of the place – communes with the garden which stretches towards the southeast. On the second floor, a residential space and a workspace were positioned along the east-west axis. The terrace, connected to the workspace, faces the south. Considering the two family members that have completely opposing schedules, we focused not only on simply separating their spaces but also how to best coordinate and complement the intersections between them. In order to minimise noise at particular times of the day, the design consists of five areas that can connect and separate from one another. In other words, even if two spaces are positioned right next to each other, the difference between levels gives a sense of psychological distance, while communication can take place whenever necessary.

The sunken terrace in the northwest and the terrace on the second floor of the house are clearly designed as exterior spaces, in a shape that embraces the views of Seong Mountain and the Nam River. The interior was split into the first, mezzanine, and second floors, so it serves as a transitional space without a wall and minimises any potential interference. The site have been positioned in a shape of encompassing the southeast side so that the client could enjoy the large yard during their morning routine. 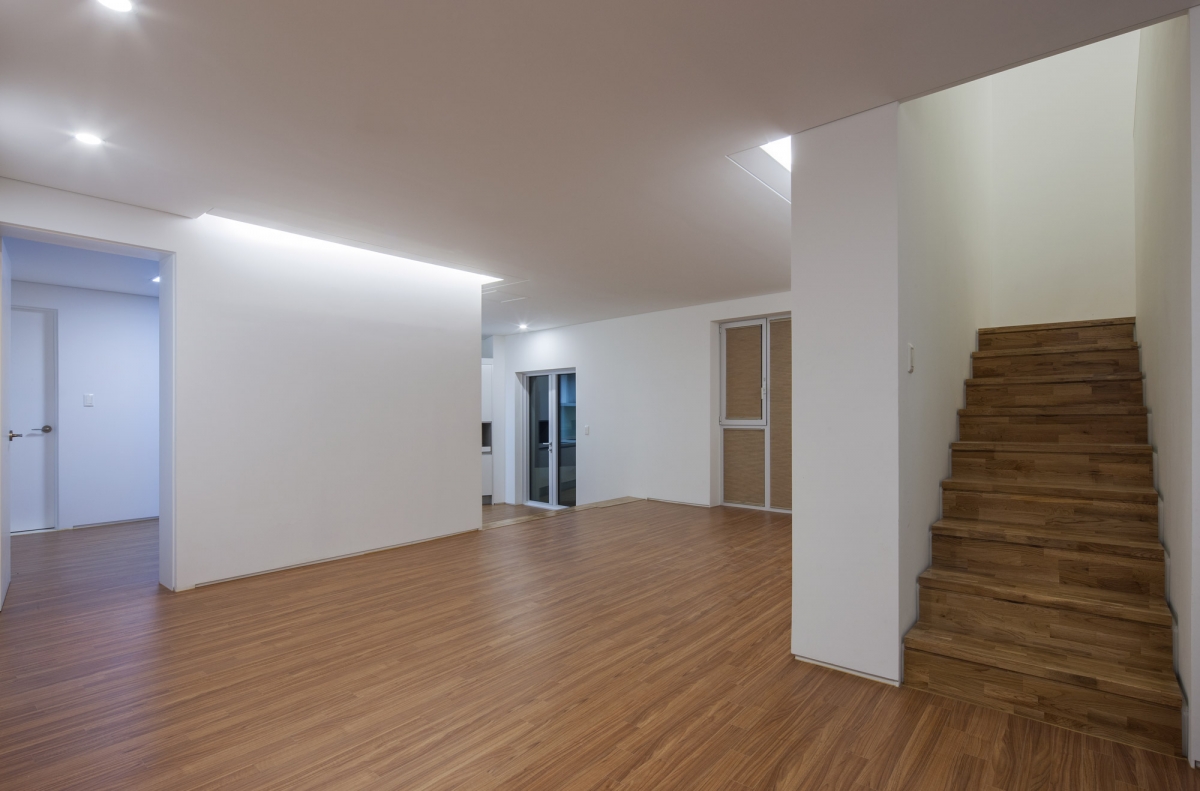 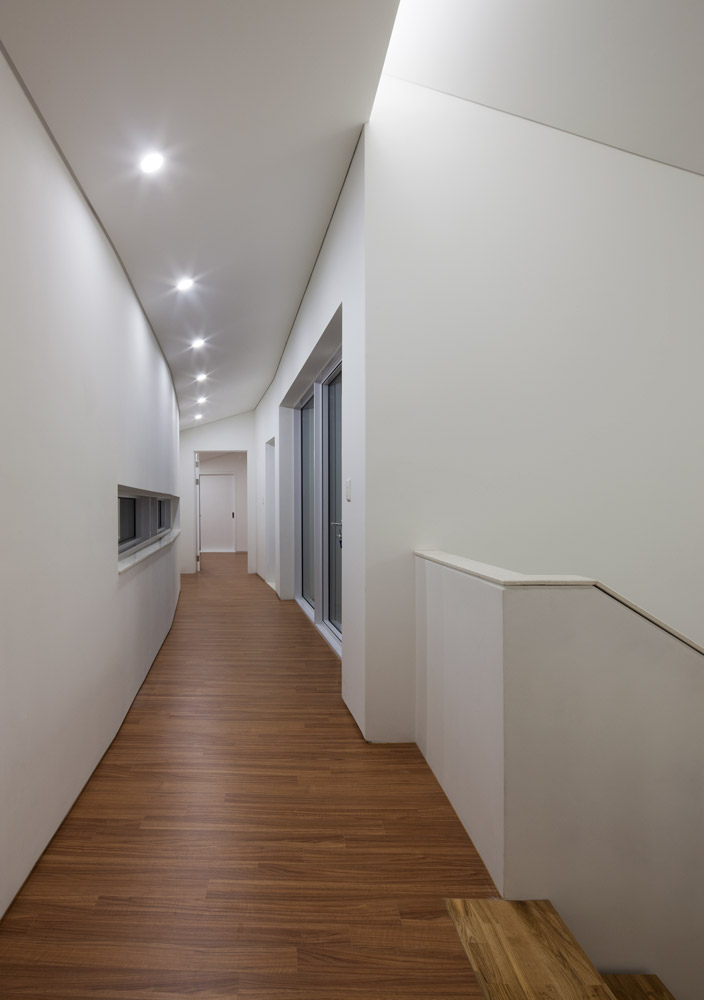 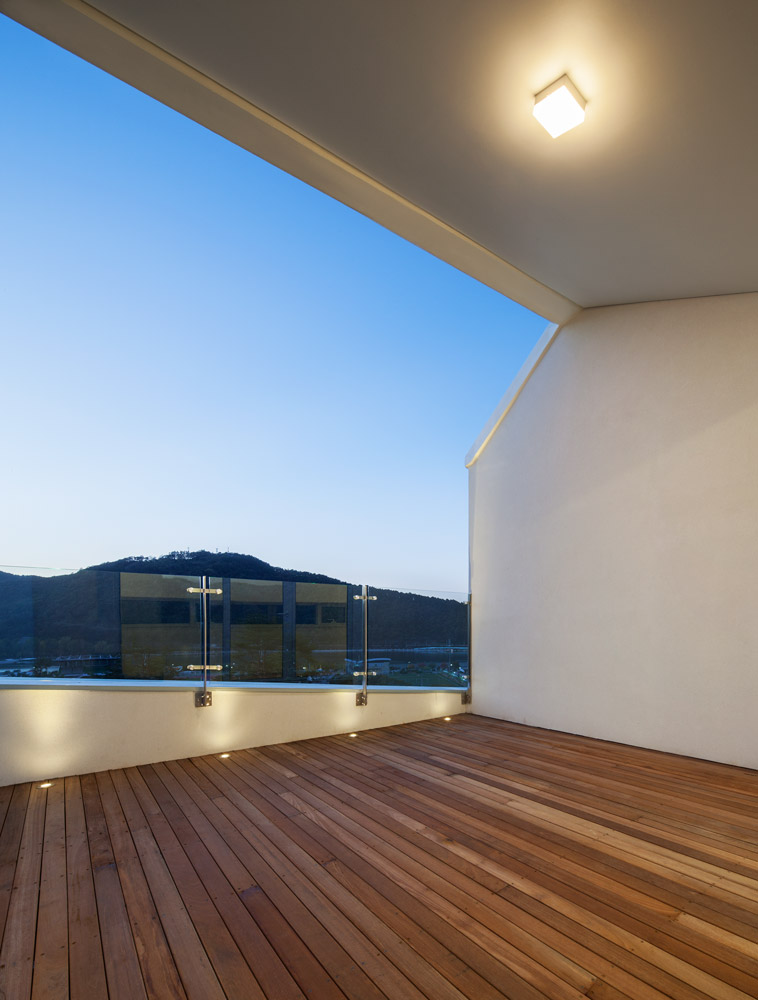 One of the family members finishes overnight work on the second floor, enjoys the daylight hours and takes a rest on the terrace in the yard in the morning, facing Seong Mountain and Nam River while passing through the hallway to the bedroom. In the meantime, another family member enjoys the natural light from the southeast in the inner room, take refreshments on the patio, which serves as a pocket space, and entertains guests arriving in the morning. The house was also designed to guide the client’s son and his wife, and the grandchildren who visit the client every weekend, to organically occupy this housing space, which is different from the residential spaces that they experience in Seoul.​

Cho Shinhyung
Cho Shinhyung graduated from Yonsei University in Seoul, South Korea majoring in Architectural Engineering. He received a Diploma from the Architectural Association in London, England and a Masters in Architecture from the Graduate School of Design at Harvard University. His design and research lab is exploring architectural relationships such part to whole, ideal to real. The notions of the unit or module have led him to an expressive contextual rhythm through a series of variation and repetition. He is particularly focused on environmental architecture and experimenting with various fabrication techniques to uncover and define an explicit logic of construction and structure. These ideas have become synthesized in his various typological works such as pavilions, various art installations and exhibits.
No.615 February 2019 architecture Wira-ri Hanam-myeon Hwacheon-gun single house curve light separating connecting fence
LIST
bookmark_border
favorite_border
38