This house is a three-story house with three gardens, designed as a dwelling for three generations. The site runs along the range of a small, densely wooded hill. This small hill became the most crucial element when determining the layout of the house. The house was aligned to the shape of the site and placed parallel to the axis towards the hill, in order to draw the hill’s natural flow into the house. Moreover, the end of the sight line, which binds the long-lined spaces together, was always directed towards the hill. Spaces that are divided into few parts here overlap, going beyond the simple boundary between interior and exterior, but they never block the view of each other.

The definitions of the three gardens in this house are quite flexible: including a yard with granite stone inside the main gate, a soil cement yard in front of the guest room, and a green yard in front of the dining room, as well as a dirt yard for children, a grass yard for adults, and a vegetable garden for the lady of the house. Sometimes they are simply defined as the yards on the first, second, and third floors. Based on the needs, they become a yard, a garden, or a passageway. The intention of the architect remained mutable because a house is a living thing that is eventually completed by its users.

The site was elongated east and west, at the edge of the small hill, through an unusual shape and a fairly steep slope. The widest space was positioned on the sunny side, at eye-level to the natural landscape, and neutral rooms – such as a living room, dining room, grandmother’s room, study room, and work room – were introduced.

By virtue of the site’s shape, elongated along easterly and westerly directions, every room in the house receives warm light from the south. The slope that begins at the foot of the hill creates two large steps in the site’s longitudinal direction, allowing each household to be distinguished vertically. A parking lot, storage, and laundry room were placed deeply on the sloping side, by practicing infraposing strategy. It is not architecture superimposed into the ground, but an architecture infraposed beneath the ground. Yet, the land has not been dug down. By being properly hidden and then revealed, the potential forceful tendency of architecture becomes somewhat softened. Just as a ship needs to be partly submerged in order to balance on water, architecture also needs to retain a relationship to the ground to a certain extent in order to maintain harmony.

When one enters the main gate on the first floor, one will first encounter the covered yard in between. Here, where one experiences the image of the house for the first time, it is dusky. This is because there is a wall standing at the front, so space is only lit up by the slanted sunlight coming in from the side. The visitor’s gaze naturally looks for the entrance and sees the two front doors on both sides. The one on the right side is a private entrance used by the second generation couple. It is connected to the parking lot, leading to the study room and the work room on the second floor, then to the bedroom space on the third floor. The other door on the left is the main entrance to this house, and it leads to the guest room and the stairs to the second floor. The guest room is mainly used by the families of the younger generation who moved out of the home after marriage, and small spaces designed for children have been concealed inside. All the rooms are connected to the south yard through the narrow wooden porch (toenmaru), and children can use the yard and this room as their play areas.

The first floor is divided into two by the yard, but the second floor forms a wide platform, tying the entire house together into its circulation. When ascending to the second floor via the stair at the main entrance, there are two living rooms on either side. One is where grandmother spends her entire day, and the other is a shared living room for the extended family. Originally planned as a central space, the shared living room adjacent to the dining room was positioned at the centre of the building, but more than that, it was intended for use as a measure of the depth of the longest and the largest space of this house. In the study located in the far west of the house, the small forest on the hill can be enjoyed as a garden, dividing the yard into two and adding an additional purpose.

When one looks at the other end of the house, after emerging from the grandmother’s room located on the easternmost side, the gaze penetrates the two living rooms beyond the yard and the study, leading to the forest on the western hill. It is a sight line imaged from the very beginning of the design phase, where a most impressive and ample view coupled with this unique spatial experience can take place. It is connected as if it was a single space, but the boundary between the inside and the outside is blurred by the penetration of the outdoor space. It is the largest and the longest space in this house, which can be experienced daily without wearing shoes.

Not Fancy, Nor Simple

The building is mostly finished with lithin coat on the stone and long, light grey concrete bricks. Phosphate panels in-between connect and separate stones and bricks, filling the empty space of the facade. The long wall – which could easily be seen as a barrier when viewed from the road – has been segmented into similar coloured materials of different textures, blurring the sense of scale. The neighbours’ gaze is not fixed on the building. On the inside, the wooden structure – which is placed on top of the reinforced concrete structure – is directly exposed to the ceiling, as revealed through the window. As a result, the building is a light gray tone overall, but it does not seem too dark or too bright due to the addition of warm wooden materials and dimmed lighting. The house is not fancy nor simple, just as the client desired.​ 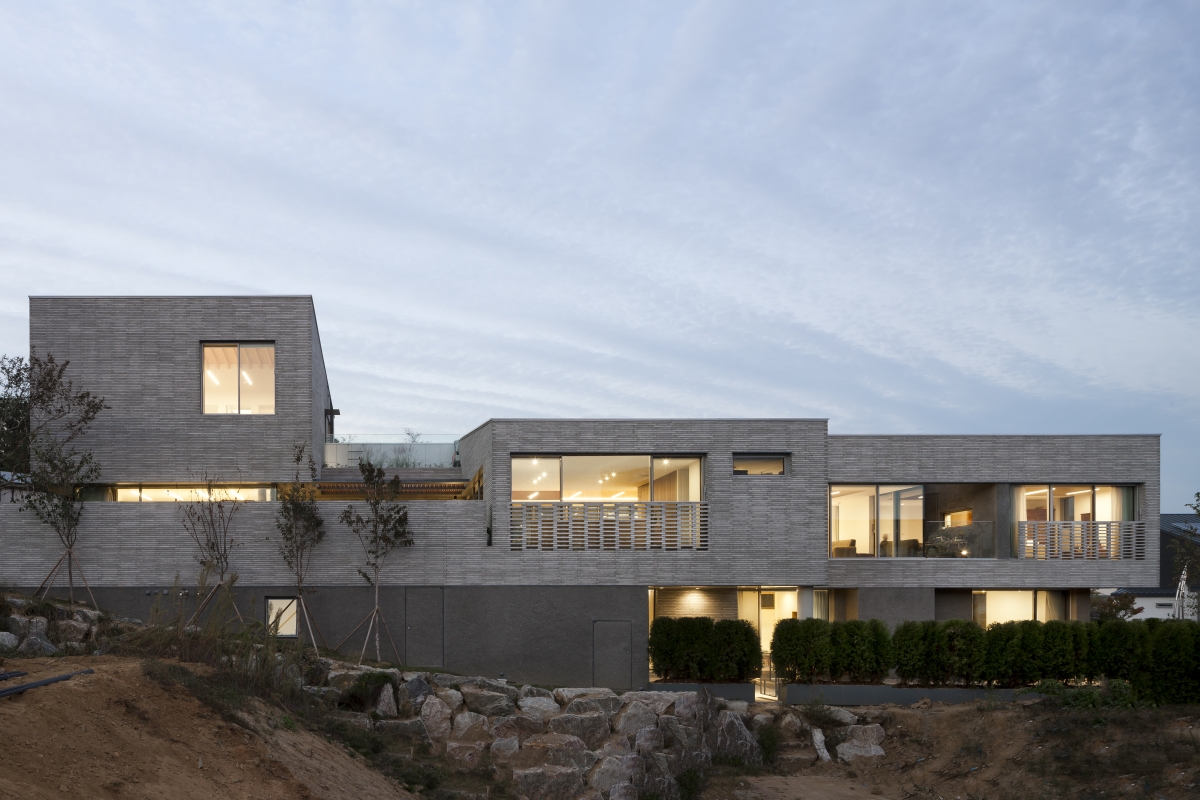 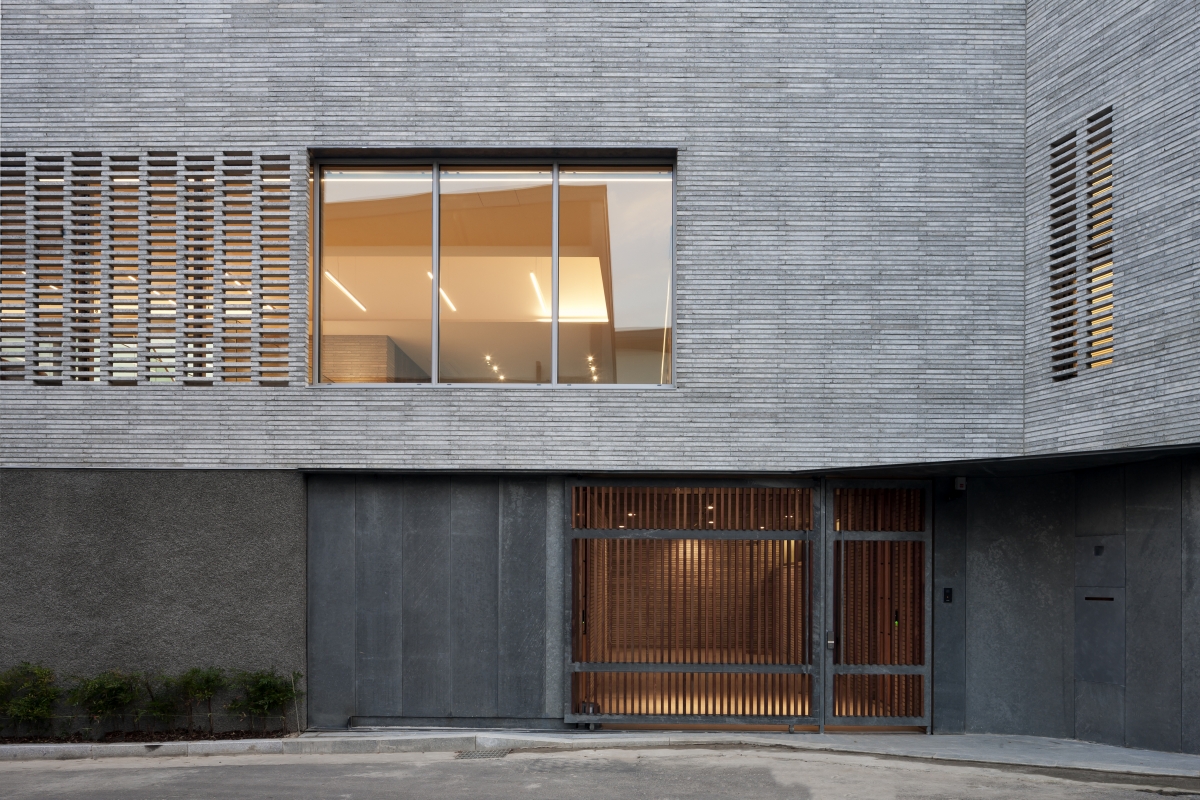 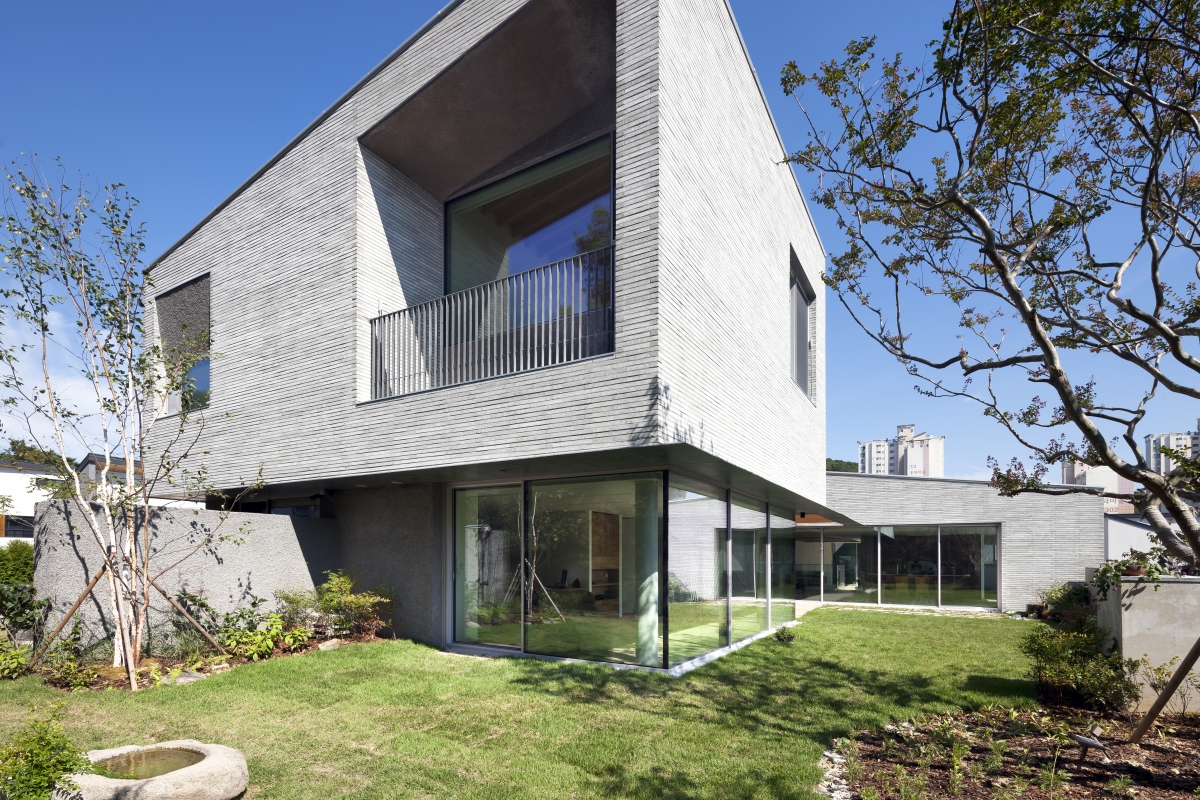 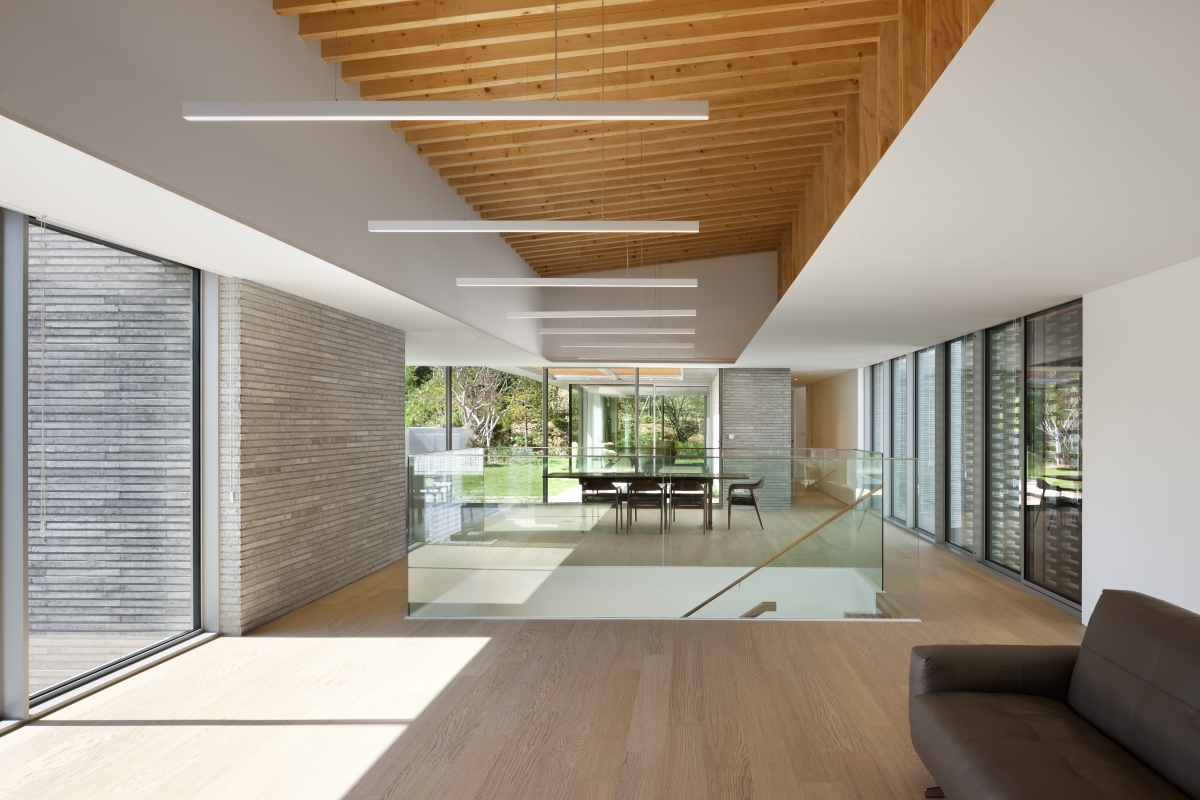 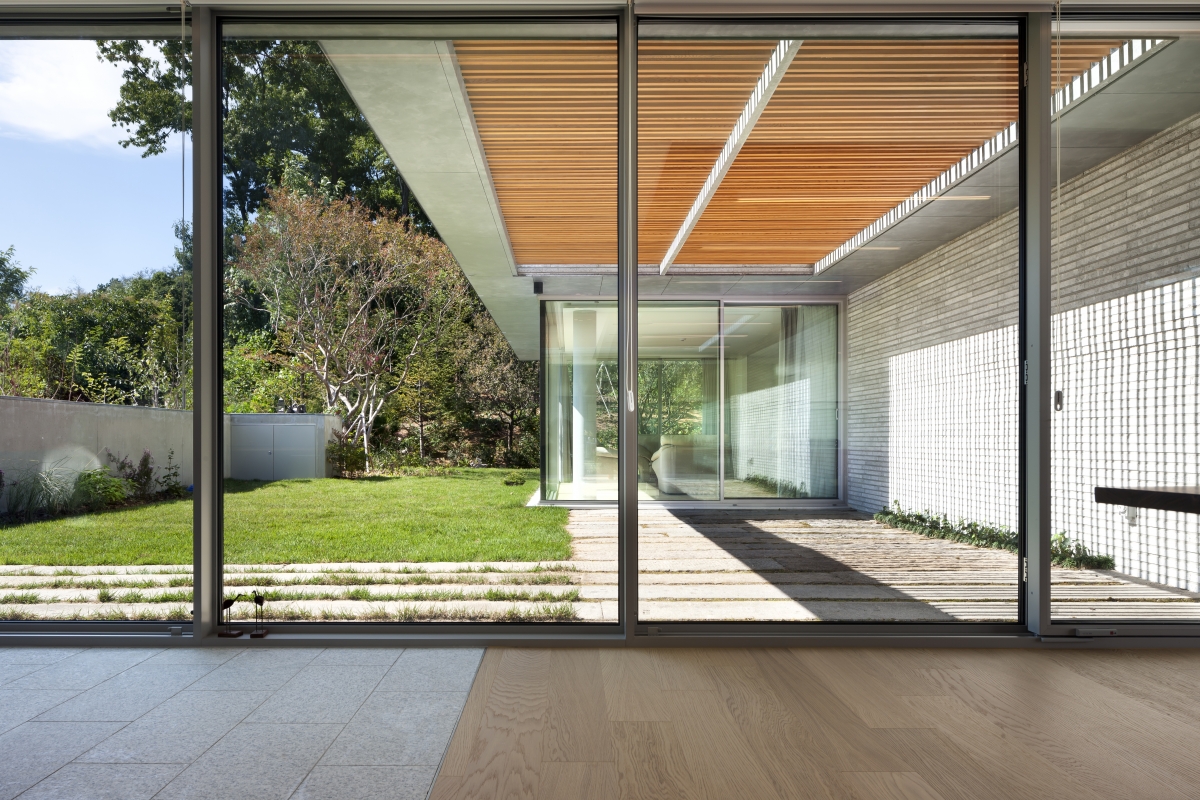 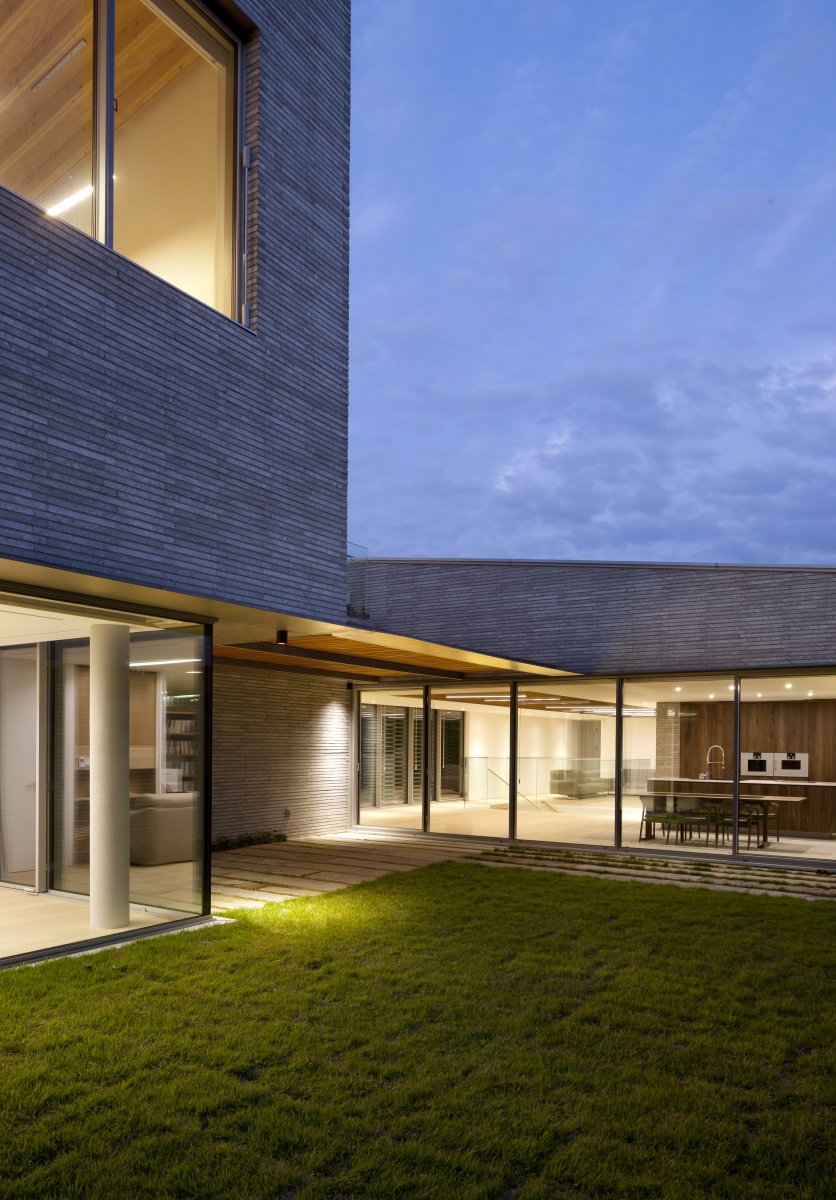 Lim Yeonghwan
Lim Yeonghwan received his bachelor’s degree from Hong-Ik University, a master's degree from University of Pennsylvania, and a Ph.D degree in architecture from Seoul National University. He is currently an Associate Professor at Hongik University while also serving as a partner of D·LIM Architects. He has received twelve architectural awards, such as the Seoul Architectural Awards, the Korean Architectural Awards, the ‘Best 7’ Award from KIA, and the Young Architect Award. He participated the Korean architecture exhibition in London 2015. His works include the Ahn Jung-geun Memorial, CJ Nine bridges The Forum, Stardom Entertainment Office, Shesmedi Hospital, and Naver Nursery School.
No.614 January 2019 architecture residential single family house yards gardens three generations concrete brick
LIST
bookmark_border
favorite_border
43