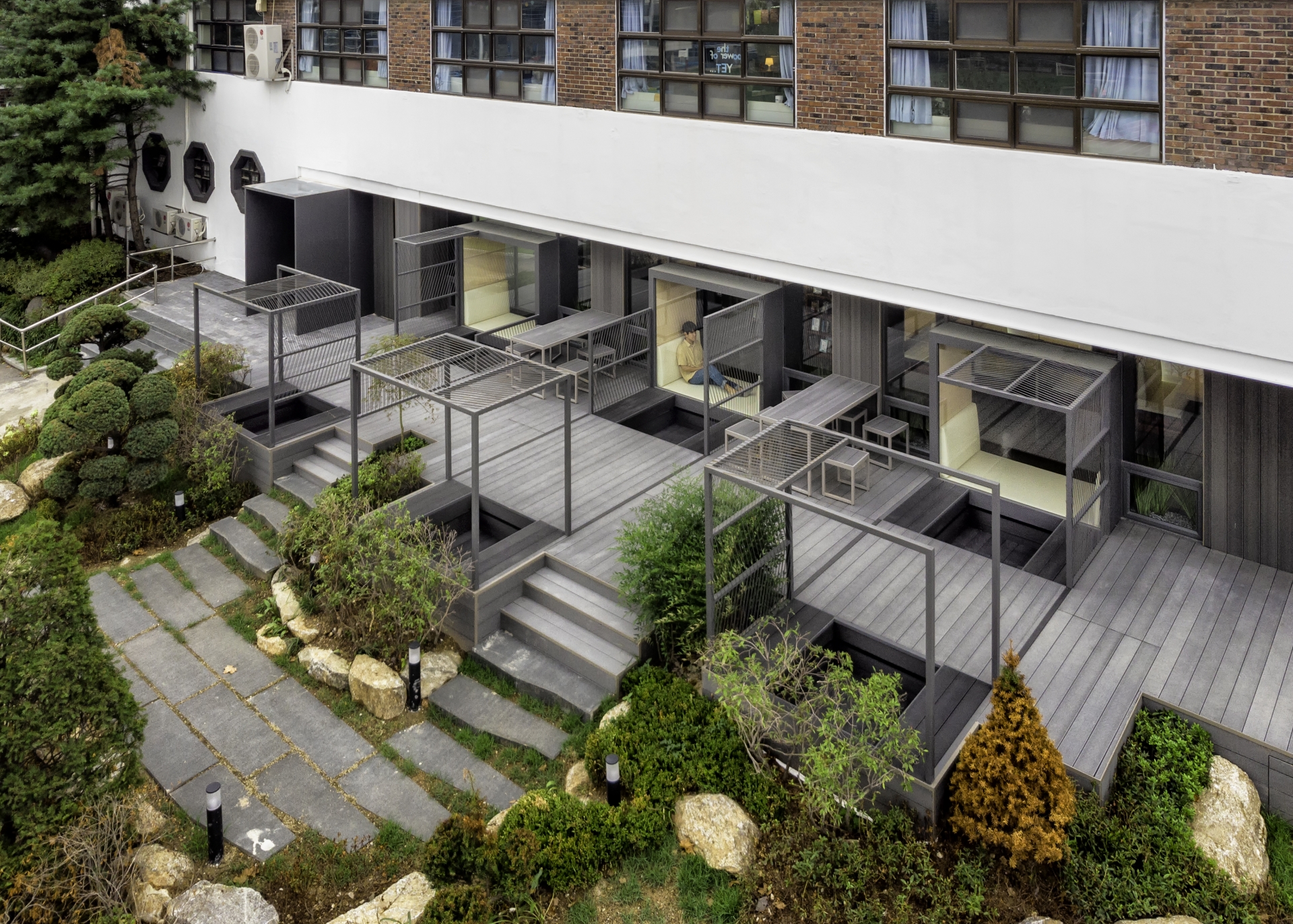 The Seoul Foreign School (SFS), located on a striking hilltop site that overlooks Yeonhui-dong, is a campus where new educational concepts are emerging. This cluster of historic and contemporary buildings spanning four decades offers an archeological viewpoint of our changing times. ‘Efficient’ double-loaded corridor buildings from an era where learning by rote was the standard have been juxtaposed with the recently completed High School designed by the New York firm Ennead Architects, where spacious informal learning areas are as abundant as the classrooms themselves.

First announced as part of a limited competition, the SFS Middle Years Library project brief was an exercise in converging these two contrasting ideologies and timelines, and the goals of the project were both pragmatic and idealistic. Central to the guideline’s progressive agenda was the adaptive re-use of the 35-year-old Middle School’s half-submerged ground floor. Previously an open pilotis parking lot before becoming the campus’ central IT office, the obvious impulse to demolish all existing partitions and provide flexible space was foiled by the embedded IT server room. It sat in the middle of the given space and had to remain in continuous operation as it served as the school’s digital central nervous system.​

Within these constraints, the design leverages the existing fragmentation through the approach of ‘buildings-within-buildings’ that connect the scale of the individual to the larger collective of the school. Beginning with the ground floor façade, the new library makes various connections with the campus without resorting to a simple glass storefront that would merely reiterate the overall flatness of the existing elevation. The insertion of cube-like reading bays creates an inhabitable ‘thickness’ that reflects daylight deep into the interior. This articulation affords students an interactive relationship with the campus: they can sit within the façade or read their books from the built-in garden deck seating just outside. A series of pavilions designed as partitions within the bay windows draw the gathering spaces right up to the campus pedestrian paths, providing alternative teaching spaces for faculty and library staff.​ 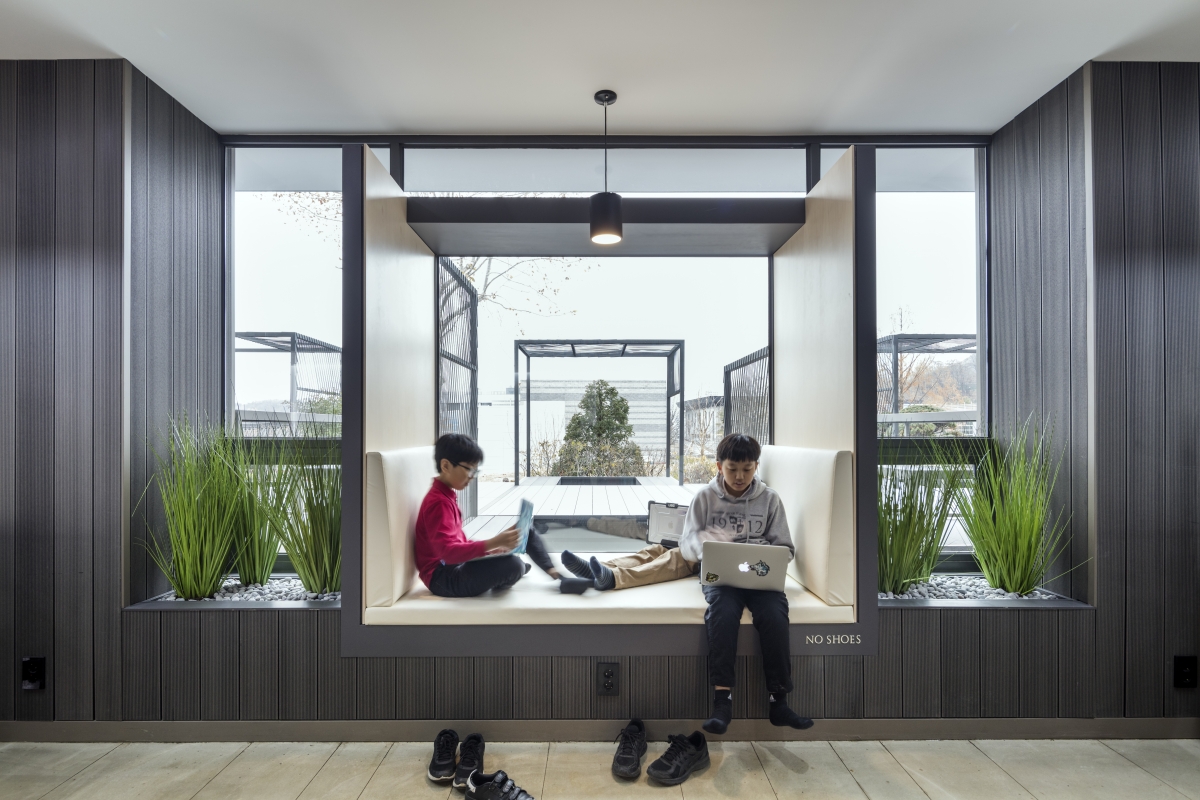 Directly behind this façade, the main circulatory spine of the library connects the existing maker-lab on the east to the school’s main stairwell on the west. While serving the pragmatic function of a corridor, it was also conceived as an urban street: a series of reading nooks encased within a wall of books are positioned opposite the above-mentioned bay windows. Moreover, a shared green-room for filming and a glassed-in brainstorming room act as a programmatic intersection between the library and the maker-lab.

The central space of the library is an open collaborative zone. The modular, semi-circular seating can be reconfigured to seat a public lecture, a large open classroom, or a casual reading room. The main conceptual feature is a glass wall permitting a mysterious view into the existing server room. Exposing the technological core of the school places the analogue world of books up against the digital ether of contemporary information delivery. Amplifying this narrative, a digitally ‘infused’ blue-lit seating nook next to the server room and a series of nostalgic bare tungsten bulbs illuminating the collaboration zone (actually enabled by modern LED technology) create a chronological juxtaposition that challenges the students’ conception of old and new.

Facing into this zone, a series of three conference rooms further articulate the concept of a ‘building-within-a-building’ through their urban-like canopy and façade. When opened up, they become a porous set of niches that create the illusion of a space that extends beyond its delimiting walls. An angled plane of mirrored glass on one of the rooms reflects views around the corner into the adjacent book stacks.​ 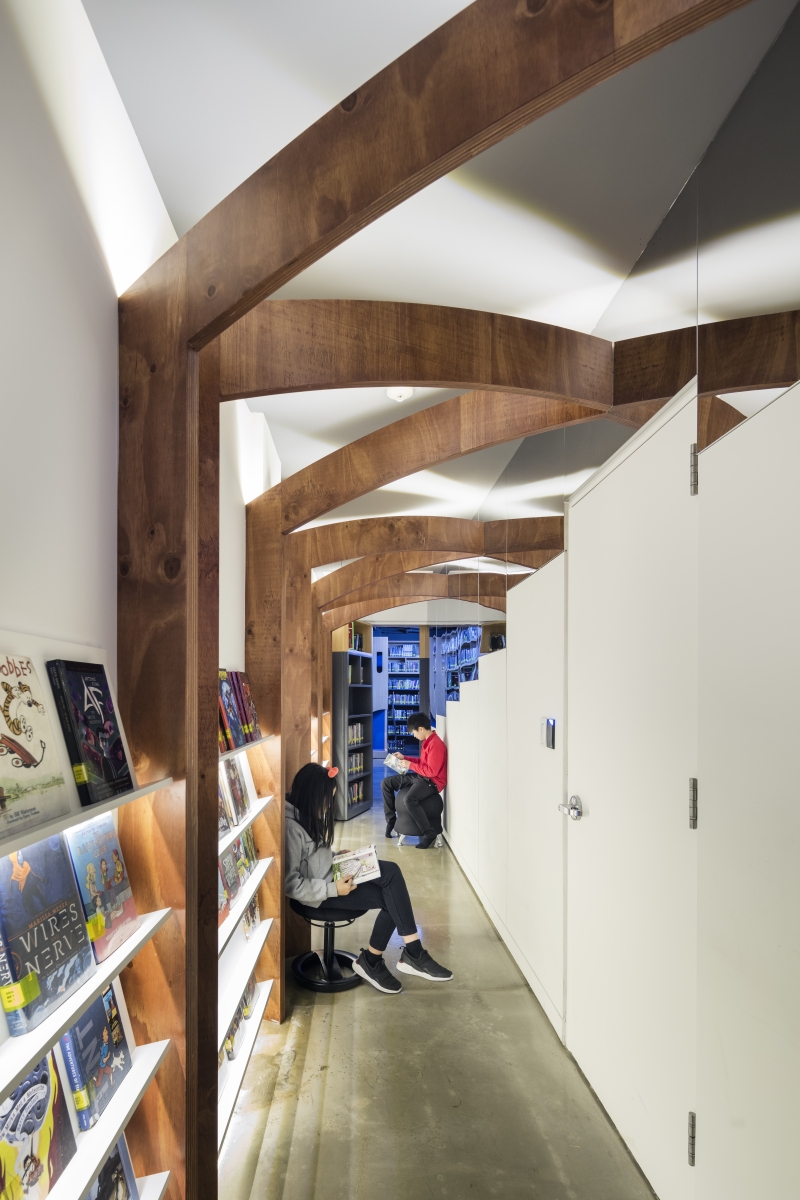 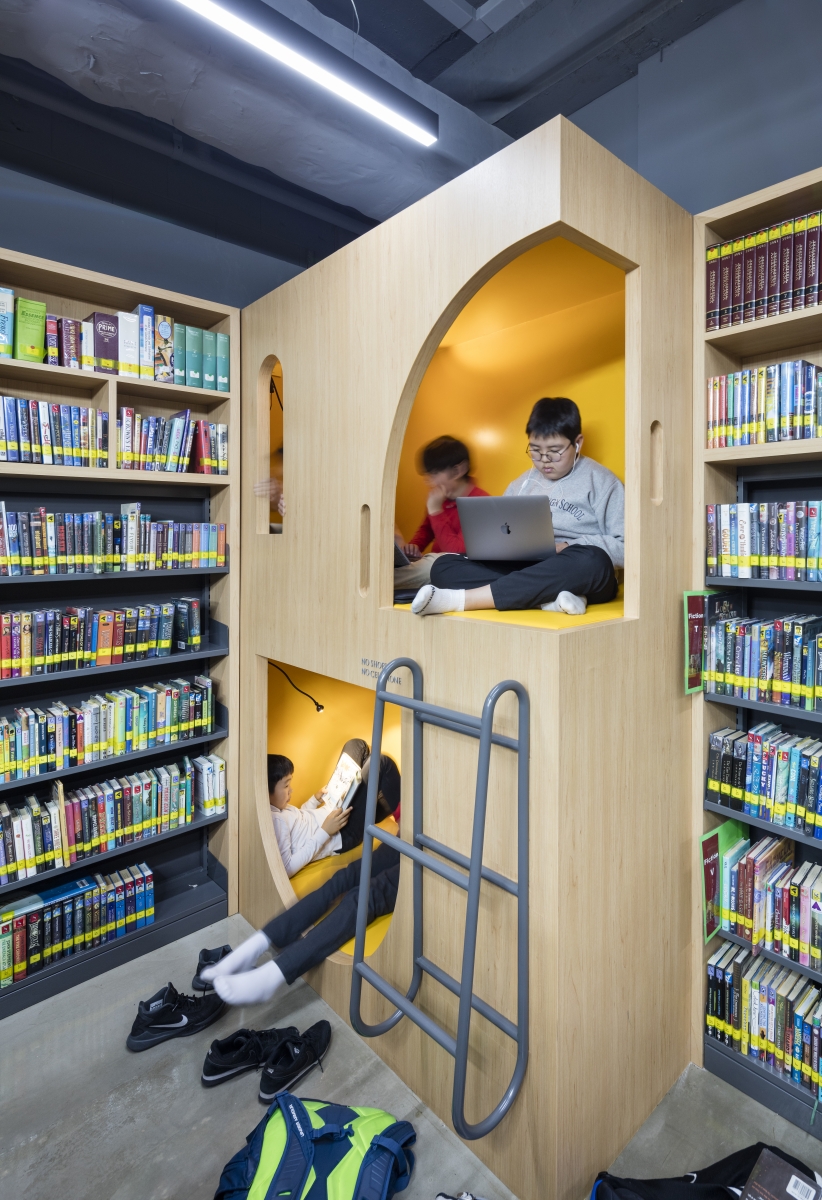 In the library’s southern-most quadrant, the book stacks room also employs shelving, desks, and seating recycled from the previous library. Instead of placing shelves in rows, however, the Labrouste Sainte-Genevieve Library in Paris is referenced by placing a desk in the centre surrounded by layers of shelves that ascend in height so as to create maximum visual connection to the books. Embedded into the otherwise inaccessible corners shelves, two-story reading ‘bunks’ invite students to literally immerse themselves in the books. The most popular reading spaces in the library, they merge the playground with the academic space. Finally, a previously dark storage corridor next to the stacks is repurposed into a ‘secret library’ filled with a collection of comic books. Reflective stainless steel along the upper portion of the walls creates the illusion of a half-arched ceiling (another Labrouste reference) making the otherwise narrow space feel like a larger vaulted volume.

Adaptive re-use is still an emerging practice in Korea due to the stigma of ‘functionalist’ (but sturdily built) buildings that nevertheless lack social space. As examples from the modern past are now nearing an age where they can either be forgotten and demolished or considered part of our historical legacy, the larger research agenda behind this project is to test whether an ‘obsolete’ functionalist typology can be readapted. At the SFS Middle Years Library, efficiency converges with the ‘inefficiency’ of diverse spaces that are necessary for creative thinking. As Seoul shifts from its economically driven development model towards an era of cultural progress, this injection of a more specific narrative could become an urban-scale sustainable strategy for upcycling the previous era’s vast inventory of generic modern structures.​ 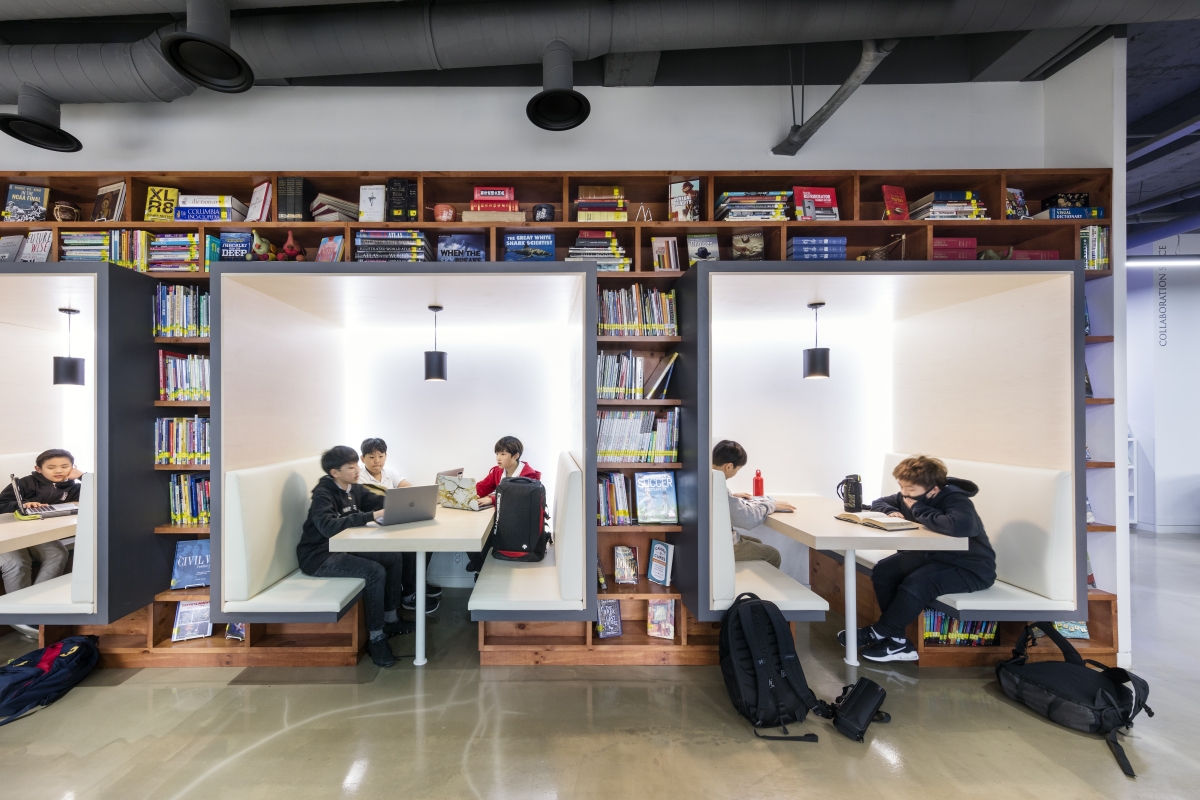 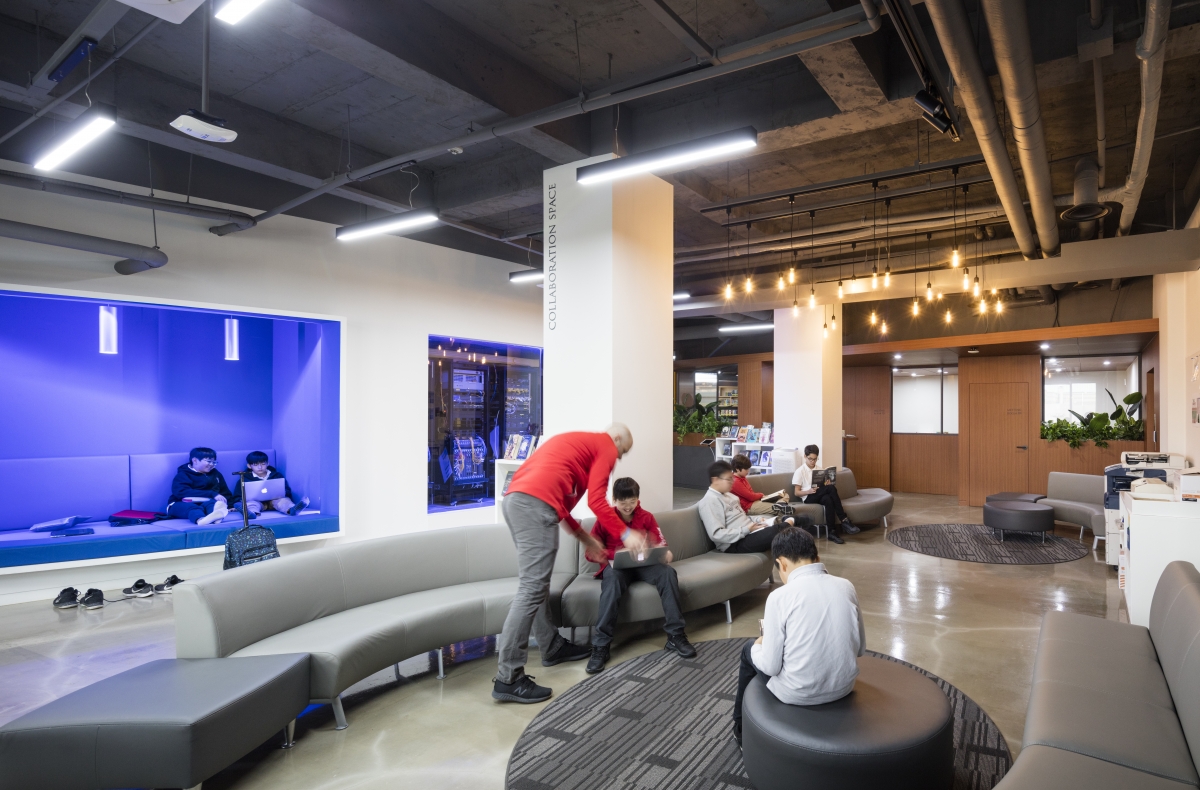 John Hong
John Hong AIA, LEED AP is an architect and professor at Seoul National University, and director of the design lab, Project : Architecture. His work bridges architecture and urbanism and converges upon the mediums of drawings, material, theory, and computation. His work has been awarded 15 American Institute of Architecture (AIA) awards, exhibited at the 2014 and 2016 Venice Biennale, and published in major media outlets such as Architectural Record, The New Yorker, and The Architectural Review. He received his master’s in Architecture from the Harvard Graduate School of Design and taught as Associate Professor of Practice there from 2007 – 2014.
No.614 January 2019 architecture remodeling Seoul Foreign School Library Nested Learning Spaces
LIST
bookmark_border
favorite_border
41