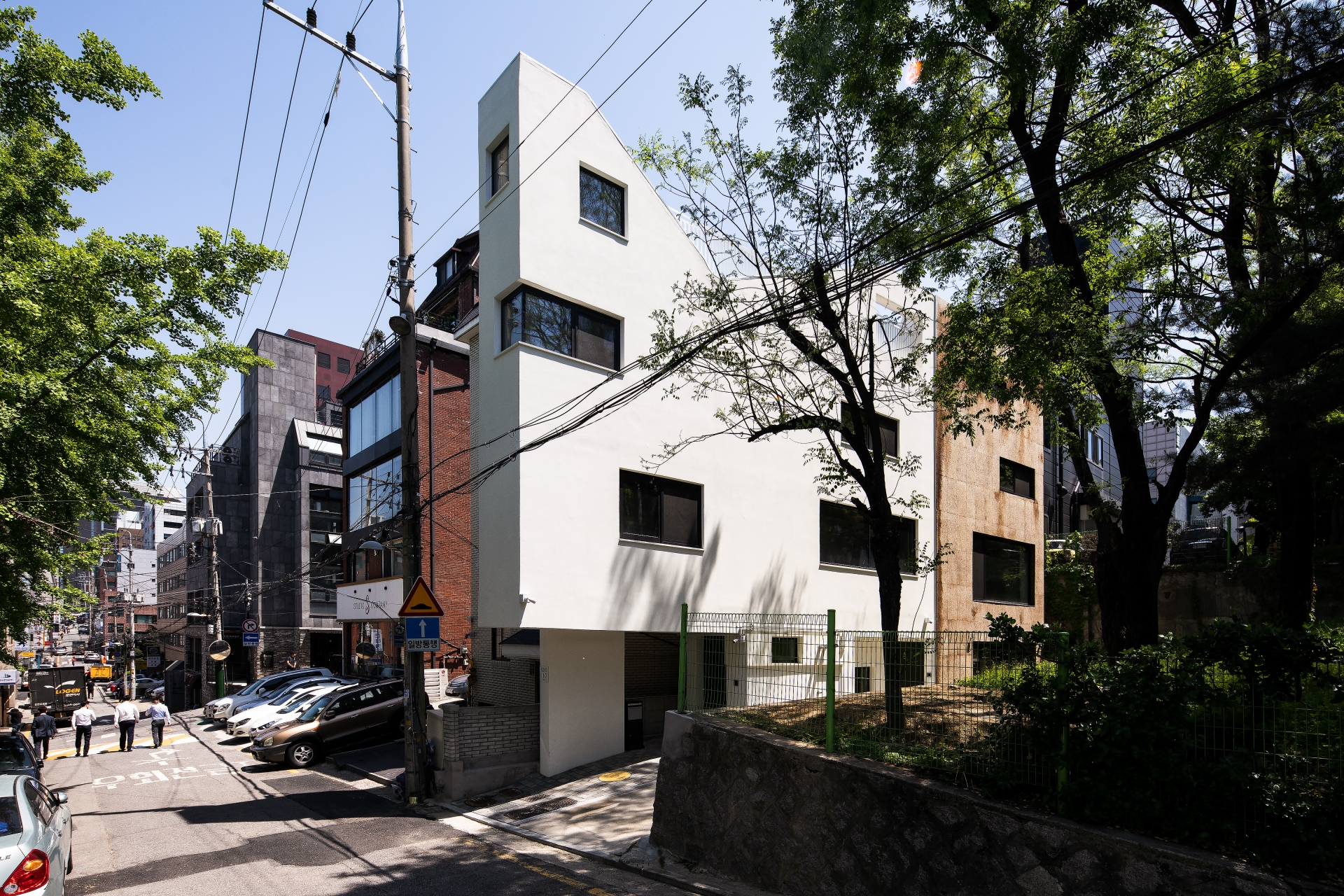 Before embarking on the planning stage, the first question asked by the client, ‘most people said that this land is unsuitable for building a house. Is this true?’ As we cannot say that a physique is unacceptable as it differs from the standard measurements of off-the-rack clothes, we cannot say that a plot of land is unacceptable as it is unsuitable for the building of a typical house. Efforts were made to plan for an appropriate fit to the site by observing the present conditions. There was no fault with the site. It was necessary to make a wise decision by proposing a plan that would balance the client’s demands and be compliant with the law.

1 : 10
Seocho-gu forms a green buffer zone in order to protect the residential environment located within the city from the noise emitted by the Gyeongbu Expressway that cuts through the middle. The insertion of the expressway and green buffer zone in the original city plan engendered unpleasant forms of cut away plots, just like this site. This is also the reason why the site has a dramatic 1:10 slenderness ratio.
Only a small portion of this slender plot is close to the main road and extends into the block, which is a common plot type found in concentrated downtown areas in Europe and Asia. Although a plot such as this can be found in Myeongdong, it is generally uncommon in Korea. Even though the land category is residential and the plot has a drastic 1:10 slenderness ratio, I began the project by accepting these innate conditions as an opportunity to create a new kind of spatial organisation.
2.5m
Generally, the minimum conditions for a site adjoining the road in architecture is 2m, and the width of an entrance to a parking lot is 3m. With only 2.5m bordering the road, the site could obtain construction permission, but it was impossible to introduce a parking lot. It was feasible to create a house smaller than 50m2 that would not need a parking space, but the radically narrow width would not allow for the house to have a living room space if the vertical movement path was placed within the 50m2 floor area. Through twists and turns, we were exempted from the parking space obligation in accordance with the exception clause stipulating ‘in case it is recognisably difficult to install a parking space’, paid the fee stated in the ordinance and could expand the area on which we could construct.
Spatial Organisation Without Division
Each floor’s space unfolds like a panorama offering a view to the green buffer area of the Gyeongbu Expressway is a series of passive rather than active divisions. The spatial division was minimised to allow the resident to move through different spaces within a space of narrow width. While the second floor housed the living room, dining room, kitchen, and utility room, and the third floor has the bedroom, laundry room, bathroom, and kid’s room, each room’s function is not divided. The second floor is a semi-private space that is a shared space among the residents and a medium space to greet guests. The third floor consists of private spaces for the family members and living support spaces. The staircase was vertically planned from the first floor to the third floor to make each floor (including the fourth floor) flow vertically. The house was designed to avoid both horizontal and vertical segmentation.
Balancing Action
Should we maximise openness by using the windows viewing the green area? Or should openness be minimised to block out the strong afternoon sunlight and evade a possible intrusion of privacy? We considered the activities of the residents that would take place in the aligned spaces in order to achieve a balance between openness and privacy. The point at which activities occur and meet with the direction of sight were important consideration factors when exploring the balance of windows. As such, the activities in this narrow space influenced the exterior façade.
Differentiating the Rooftop
The kid’s duplex room soars up on the north of the building and a space that leads to the roof protrudes upward on the south side. These two points, like pointy ears of the building, are connected by a smoothly curved wall which is equipped with a frame intended to allow for a view towards the green buffer zone. Open to the sky and offering a selective view of the green area through the wall frame, the rooftop differentiates itself from the​ ​consecutive openness of the second and third floors. 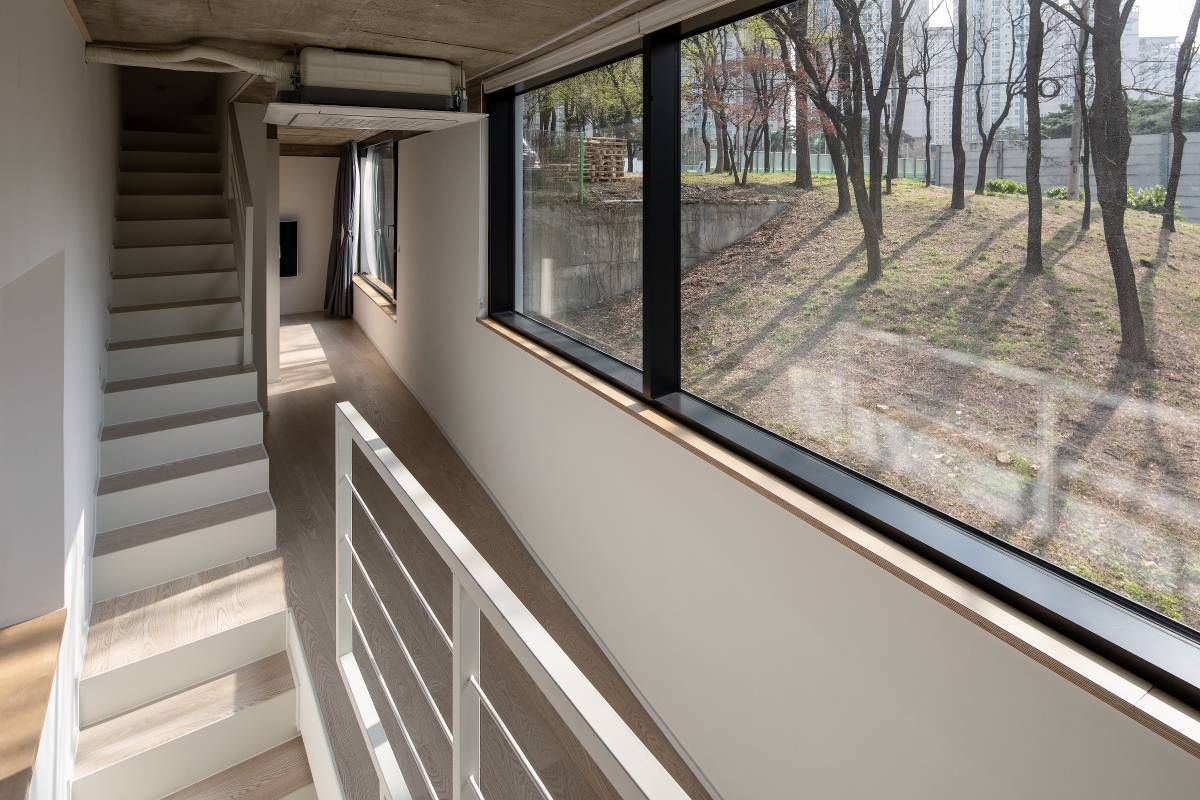 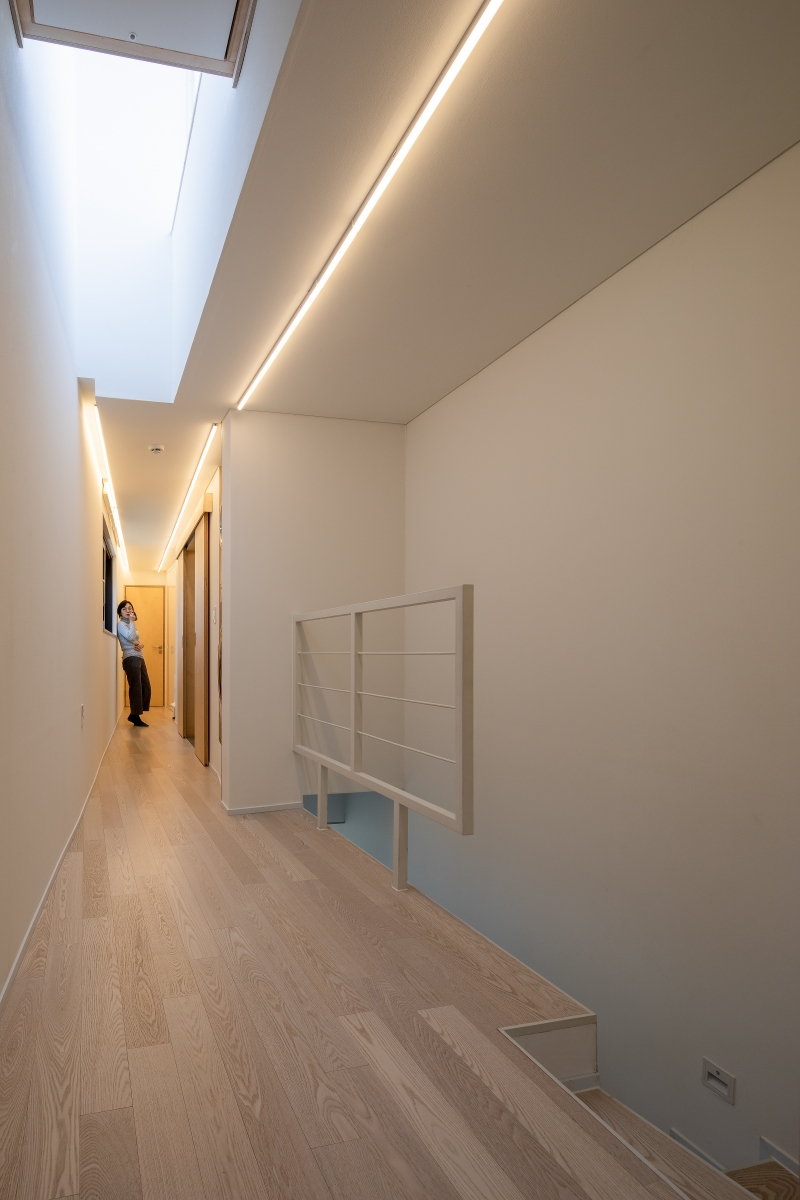 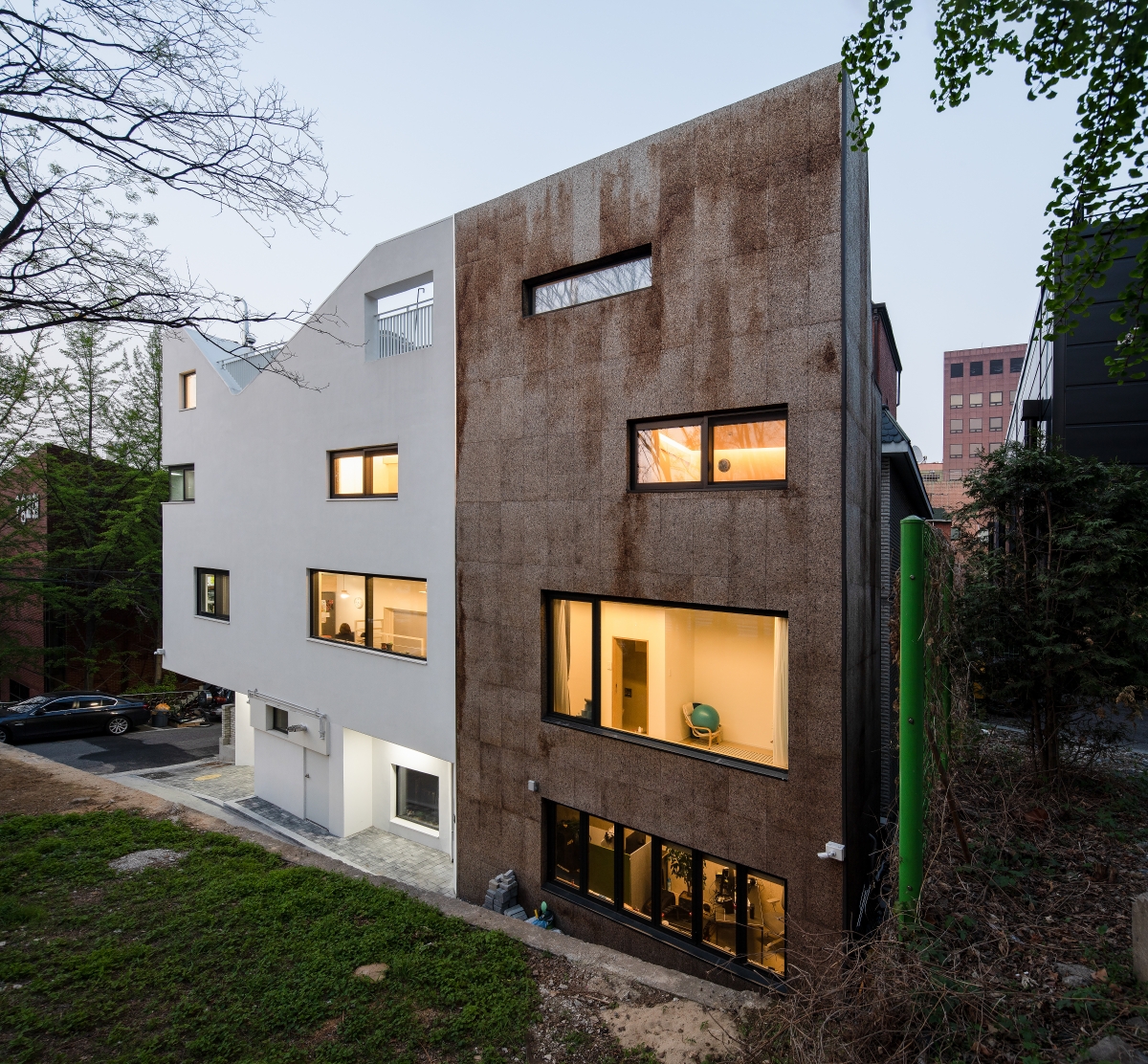 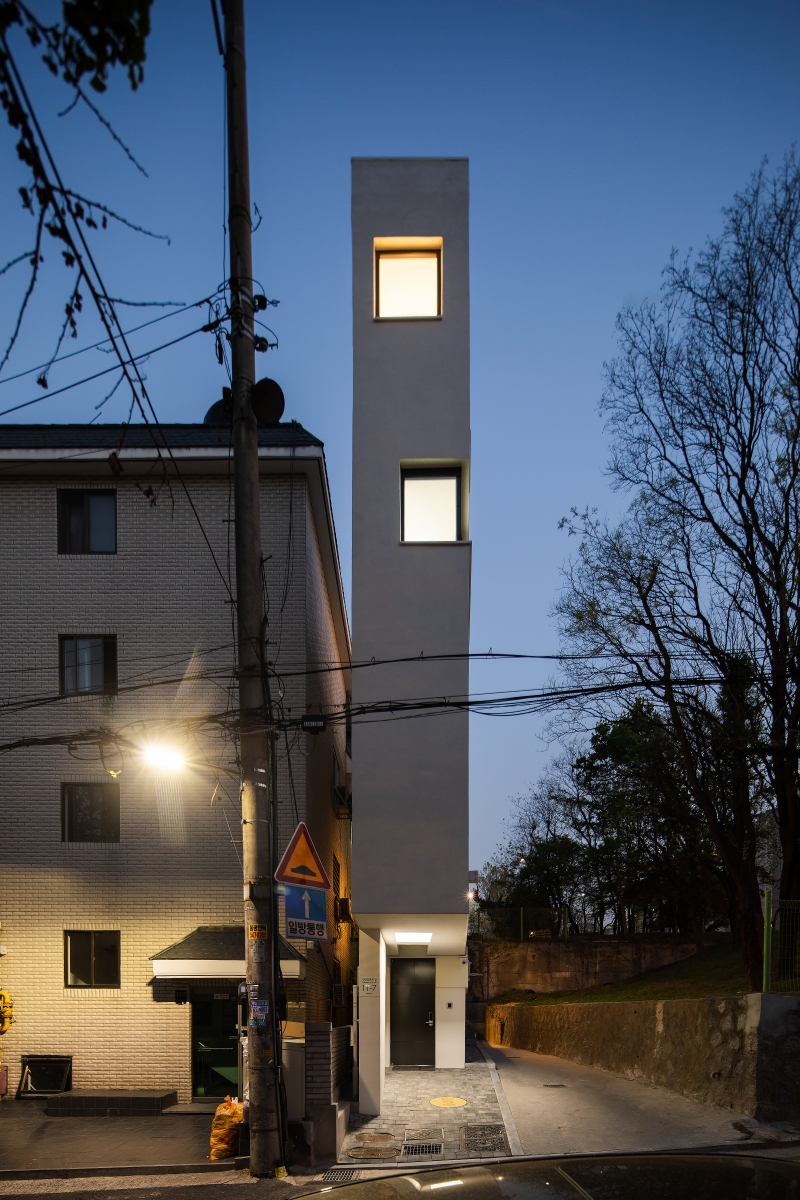 Ahn Keehyun
Ahn Keehyun is an associate professor at Hanyang University, and is a public architect at the Seoul Metropolitan Government. After his education in Hanyang and U.C Berkeley, he co-founded AnLstudio for investigating architectural experimentation as well as its adaptation in various scale.
Shin Minjae
Shin Minjae is the principal of AnLstudio as the Korean licensed architect. He is a public architect at the Seoul Metropolitan Government and an adjunct professor at Hanyang University. He had various experience through small Atelier to corporate architectural firm. He His recent work is POP House, Dongijae, Openalley, 2014 Sulwhasoo cultural exhibition, Yangpyung House. He was awarded the Young Architects Award, Chungnam Architecture Award, Gyeonggi Architecture Award, Wooden Architecture Award, and Seocho Architecture Award.
No.613 December 2018 architecture residential AnLstudio tailored architecture
LIST
bookmark_border
favorite_border
68