CROSSPOINTS BETWEEN HISTORY AND LIFE

Located in Changsin-dong, Seoul, this site for this project is surrounded by a huge apartment complex and a school. Its location, in the middle of the Naksan Mountain, descends 10m in height. Formerly a Buddhist temple named Wongaksa constructed in 1983 and abandoned since 2003, the site became disconnected from the local context and its purpose due to the nature of religious architecture. It is assumed that it was once accessible from the south, but ever since the retaining wall was constructed for the apartment complex, people can only enter the site from the northern mountain trail leading from Naksan Mountain. The Seoul Metropolitan Government (SMG) purchased this land and the facility with compensation of 4 billion KRW in 2012, but as it has lain deserted for years without proper maintenance the site has become a place for juvenile delinquincies such as illegal smoking and alcohol drinking. Moreover, part of the Wongaksa underground, which had moved to the neighbouring lot, illegally occupied a portion of the site. The adjacent sites, on the other hand, are famous for their cultural and historical significance; there was Biudang – the home of Lee Sookwang, the author of Jibongyuseol (1614) – as well as the stream in front of Jajudongsaem and the turtle rock around which the story of Queen consort Jeongsun, the wife of King Danjong, is centred. 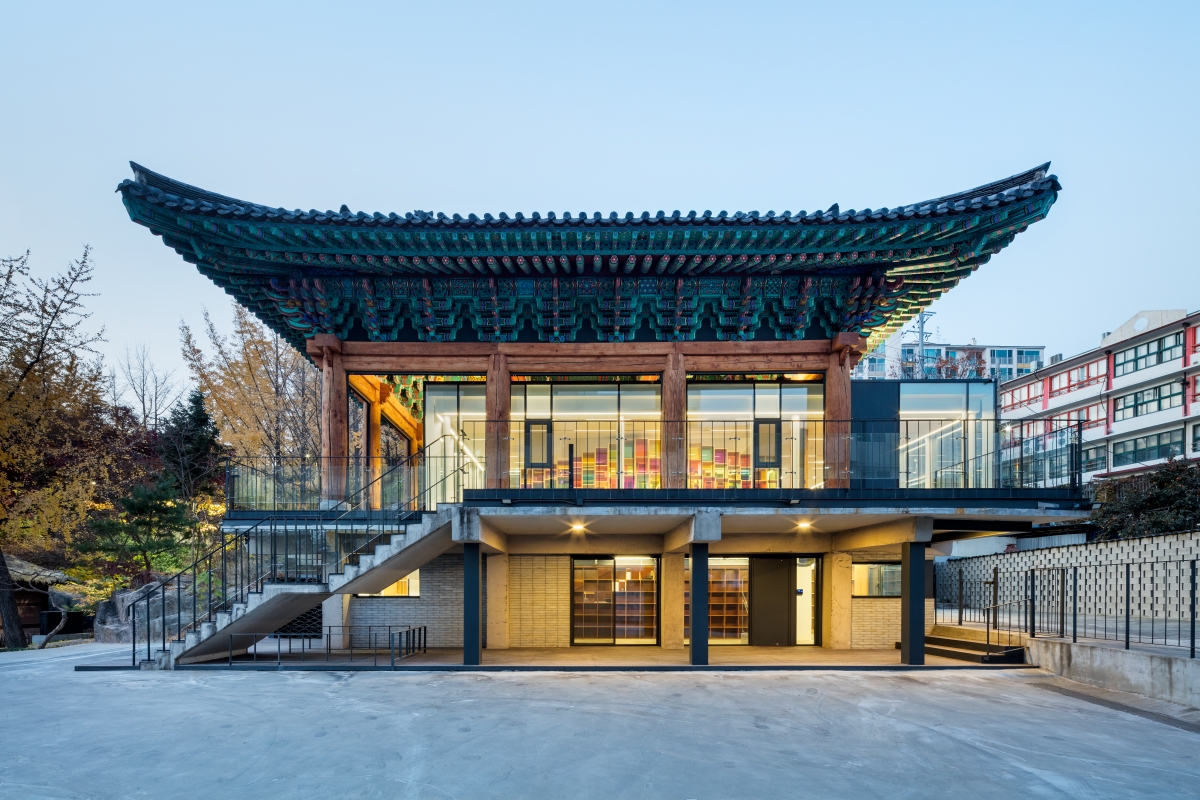 It was originally planned as a municipal library for children by Jongno-gu Office, however this plan was derailed during the negotiations and once again left empty for almost a year. Despite the best efforts of the operation committee, headed by an architect as a commissioner alongside the public officers of SMG, expertise and residents, the site remained in stalemate without any key solutions. Meanwhile, city officials accidently found that SMG was pushing for the construction of a cultural complex for female citizens, and throughout the multiple rounds of negotiations it was decided that the facility was to be run by the women’s policy department. Fortunately, the plan to build the library dedicated to the feminist history of the nation corresponds with the properties of the site, where record of a prominent female figure from the Joseon dynasty has been well-preserved. This is in addition to the fact that it can accommodate the original spatial plans such as the study of the history of feminism in South Korea, educational activities, an event hall as well as a feminist library and children’s library. It opened temporarily in December 2020, but it is now closed due to the Coronavirus Disease-19 pandemic. They plan to reopen in May 2021. 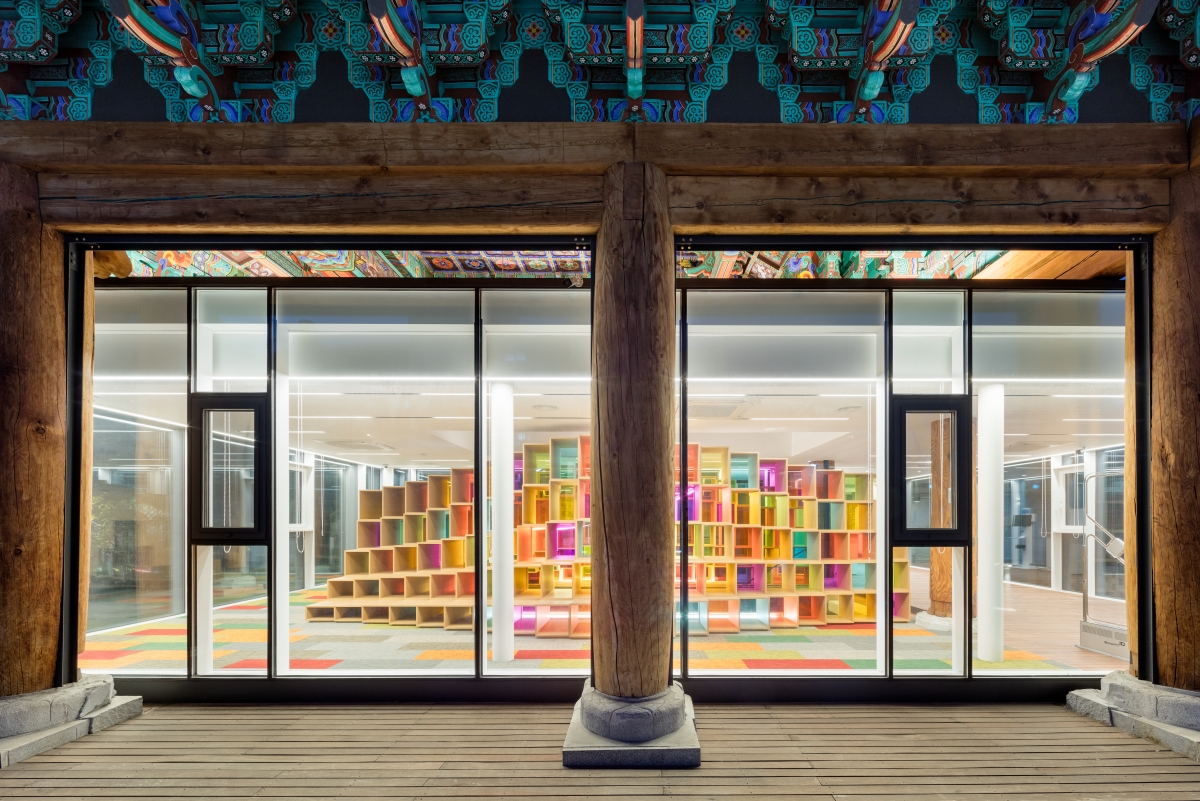 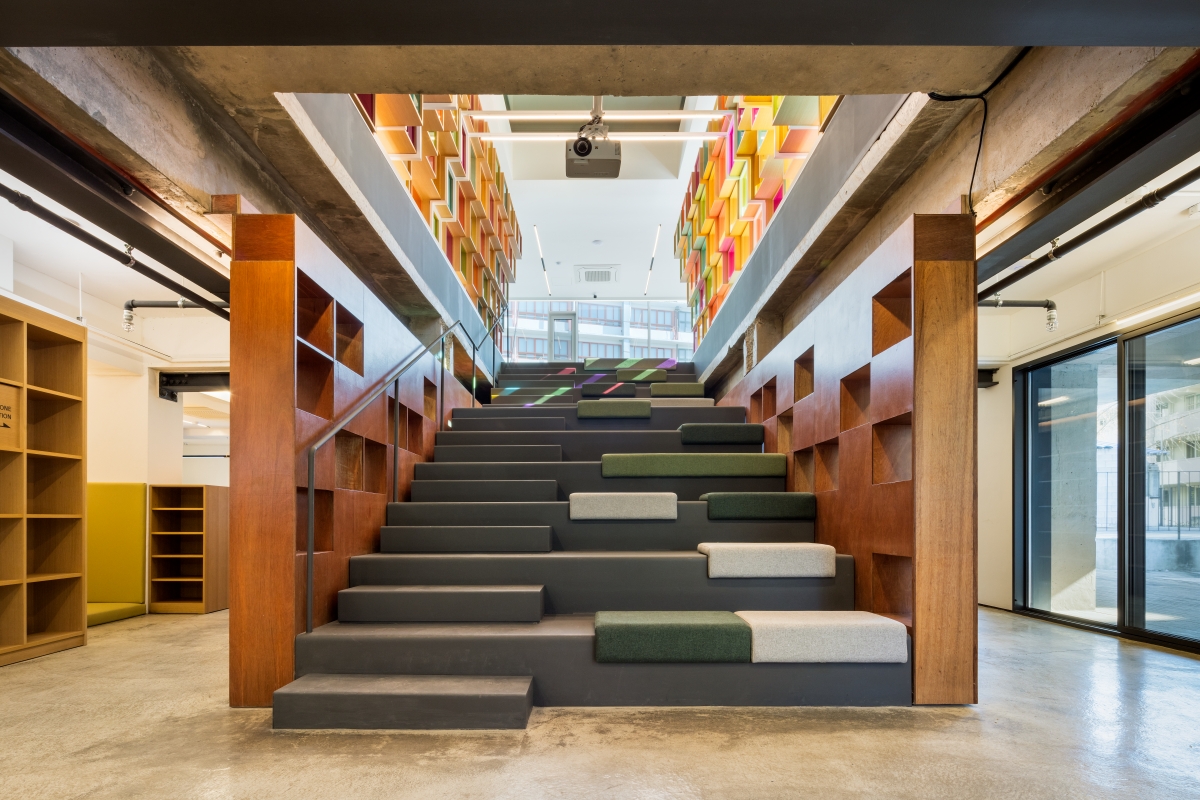 When we visited the site for the first time, the mountain terrain had been damaged by the construction of the adjacent massive apartment complex and a neighbourhood park which was insensitive to its surroundings; both caught our attention. Formerly a Wongaksa, the site for this Buddhist temple was lacking in robust connections to its surroundings due to a series of closed spatial configurations. Therefore, it was vital for us to restore the former pathways and the original features of the terrain of these altered sites in light of the maximal interventions made by the neighbouring constructions, and to come up with a crosspoint between the historical significance of the site and the local context of the lifestyle of residents.

By removing the retaining wall between parks and restoring the terrain to its natural aspect, we intended to place the building in a softer manner and for it to be recognised as a single building within the neighbouring parks, Biudang, and within the wider context of the site by using the gap between the divided masses to our advantage. In order to provide easy access from the sidewalk, we inserted deck plates as high as the Naksan Mountain road, and a single-story café and exhibition hall to connect with the library on the level below, while the stairs connecting various indoor-outdoor spaces could ignite active exchange and encounters between local residents both inside and outside of the building. Inside the café and exhibition hall, there is a folding door that can accommodate various programmes as required such as exhibitions, seminars, educational activities and so on.

Initially, there was modest aversion to the religious temper of the design of the building, so the demolition of the entire building was discussed. However, it was eventually concluded that the contrast between the distinctive structural design of the existing building and a brand-new structure would support our aims of creating an original atmosphere, and a design capable of preserving existing structural elements such as the roof, timber columns, and the base skeleton. Between Daeungjeon and Sansingak, an elevator and staircase were placed in replacement for Sansingak, to provide convenient access from the road level, and the giwa of the demolished structure was reused as a finishing material on both the interior and exterior of the building. After removing all of Daeungjeon, the timber columns were reinforced with metal detailing, and the extent to which their surfaces were scratched during the demolition of the lower structure remains intact. A glass box was inserted between the structures of the existing building to create a children’s library on the second floor and the feminist history library on the ground floor. After taking out a part of the slab of the children’s library and installing a staircase to connect the upper glass box and the remaining monk’s quarter, it became possible to host lectures as well as seminars, fairy tale readings, and performances, and so on in this space. Above all, the most notable feature of the space is the bookshelves surrounding the staircase, inspired by ‘turtle rock’ which features in the narrative of the Queen consort Jeongsun. This is also a welcoming place in which children can comfortably read books and play. 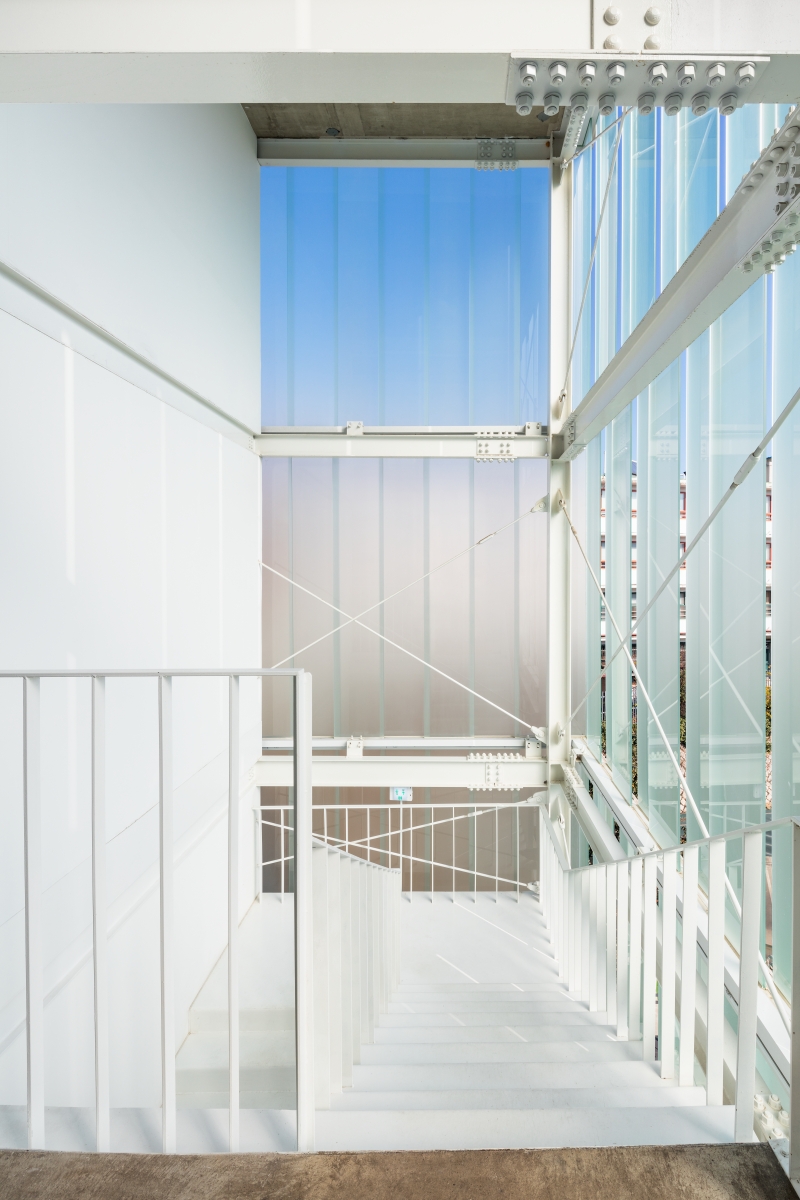 Three divided masses is a characteristic feature of spatial compositions, organically connecting space between each mass and uniting them as a whole. The mass, devising harmony between the trees, concrete, and glass units, is of a dynamic urban scenery, like a naturally built urban cell. Furthermore, the spaces between the buildings that glancingly offer views of the forest inside the neighbouring parks, create glimpses of a natural realm blending building into its surrounding environment.

Overcoming difficulties along the way we have made it, four years since we first set foot on this journey. There are many present demands that all involved parties must address, not only in terms of the ways in which the spaces operate, but the use of Biudang and Jajudongsaem, the spatial plan for the outdoor areas which has been left unfinished due to conflicts with Wongaksa and the restrictions of the budget, and the establishment of the relationship between neighbouring parks. Nonetheless, we hope this place will become the epicentre of feminist history and culture in South Korea, one that resonates and promotes a dynamic spirit.​ ​(written by Cheon Janghwan / edited by Kim Jeoungeun) 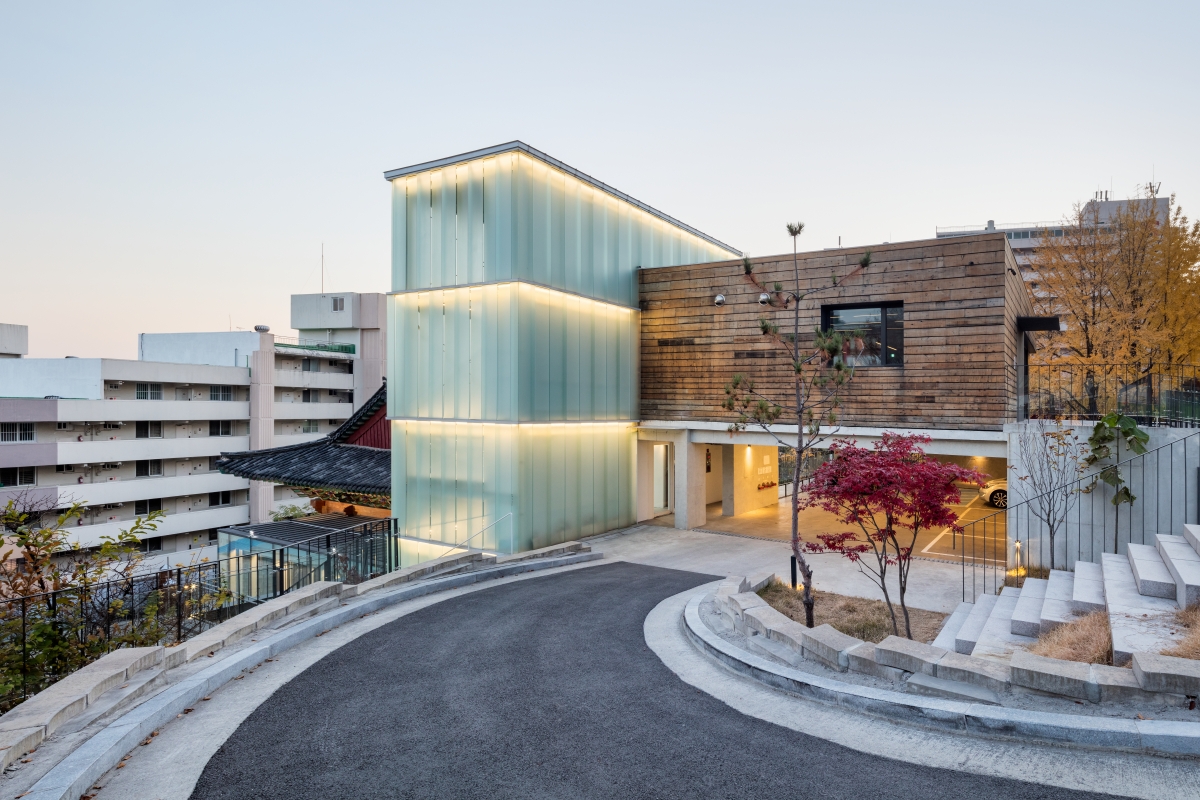 Cheon Janghwan
Cheon Janghwan is a registered architect in Massachusetts, US. He graduated from Yonsei University with B.S in Architectural Engineering and received an M.Arch from Columbia University in New York. He worked for five years in New York and Boston, working on diverse projects before he started teaching at University of Nebraska-Lincoln in 2009. After teaching for three years at UNL, he moved back to Korea and has taught at Kyung Hee University since 2012. He founded the multi-disciplinary design firm Emer-sys and his works have been widely recognised and exhibited. To date, his accolades include the Kim Swoo Geun Preview Award (2015) with Hangdong Kindergarten and Seoul Architecture Award (2016) with Godeok 119 Firehouse. He is the author of the books, Two Masters who changed the Contemporary Architecture (2013) and Grasshopper for Architecture (co-author, 2018).
NO. 642 MAY 2021 YEO DAM JAE CHEON JANGHWAN SEOUL CHANGSIN-DONG NAKSAN BUDDHIST TEMPLE RENOVATION PUBLIC ARCHITECTURE WONGAKSA FEMALE FEMINIST LIBRARY LIBRARY CHILDREN
LIST
bookmark_border
favorite_border
1