Pergola of The Club at NINE BRIDGES : Architecture and Technology Resembling the Nature

The architect, construction engineer, and technician
Three groups are gathered to speak about one architecture 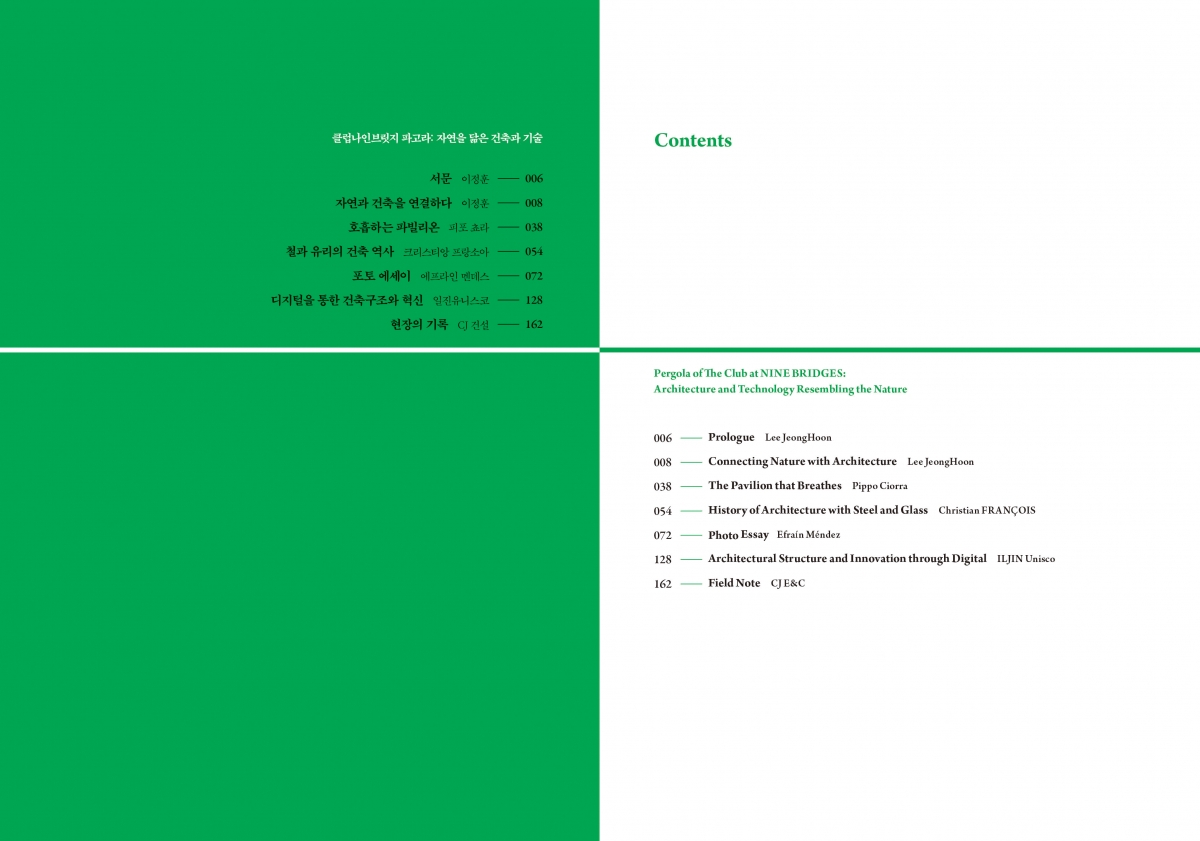 Resembling nature, embodying the nature Pergola of The Club at NINE BRIDGES

People have been inspired by nature, searching a new rule from nature, and pursuing a life that conforms to nature. This was naturally acquired from the past to the present, rather than obtained from someone’s guidance. When ancient people built a house or a building, they followed the shape or the pattern of the land, and they never cut down a single tree recklessly. However, as population gradually increased and technology was developed, nature was destroyed. It was no longer a life that was in harmony with nature, whereas human began to manage and regulate nature. Nature has evolved in the stream of development and domination, influencing people’s lifestyle and values. Then how can we retrieve a life that is in harmony with nature again?

Exploring space where nature, technology, and history live and breath

Most of the architectural books that have been published are humanities books that describe perspectives towards the city and architecture, collections of projects that focus on the achievement and activity of famous architects, and autobiographies. Including the recorded documents that describe common building process, they have certain biased tendencies. Among them, 『Pergola of The Club at NINE BRIDGES: Architecture and Technology Resembling the Nature』 covers a unique architectural process and examines the values that the Pergola of the Club at NINE BRIDGES carry in the history of glass architecture. By rigorously exploring one building, the architect’s design concept and his quest for new technology – which have never been unveiled before – will be closely looked into. In addition, it is a rare and unprecedented case in the field of architecture, that the architect, CM, and technician who built one building together also cooperate in compiling into one book.

The contents of the book

In addition to the texts from the architect, CM, and technician, this book includes remarks from Pippo Ciorra – the senior curator of architecture at Rome’s Museo nazionale delle arti del XXI secolo (MAXXI museum) – and Christian FRANÇOIS – the dean of the Glass Design Department at Ecole Nationale Supérieure d'Architecture de Nancy (ENSA Nancy).

First, Lee JeongHoon, the architect who designed the Pergola of the Club at NINE BRIDGES, goes over the project background and design meaning in the section titled ‘Connecting Nature with Architecture’. From the moment he saw the old tree at the Club at NINE BRIDGES, he sought to reconstruct not only the functional expansion of the club house but also the comfort resonated from the old tree. In other words, he perceived nature as an equal value that makes a symbiotic relationship with architectural space, rather than a subject to conquer. Another interesting point is the perspective that recognizes the old tree at the Pergola of the Club at NINE BRIDGES to be similar to the symbolism that a tree located at the entrance of a Korean village.

In the section titled ‘The Pavilion that Breathes’, Pippo Ciorra explains the differences between the Pergola of the Club at NINE BRIDGES and an ordinary pavilion, and the characteristics of pavilion architecture. He recognizes that the architect Lee JeongHoon, in fact, aims to redefine some of the specific paradigms of pavilion architecture through the Pergola of the Club at NINE BRIDGES. He examines this project in three aspects. One is the important characteristics that this project carries, stability and mobility, and the other is that the architect used the technical and structural elements as the means to elevate architectural quality. The last is focusing on the ‘convention’ called pavilion or pergola when critiquing the project. Then Pippo Ciorra remarks that “As for many other interesting architects today, Lee JeongHoon’s architecture is not based on a recurring image but on establishing a sophisticated relationship between place, technology, culture and the environment.”

In ‘History of Architecture with Steel and Glass’, Christian FRANÇOIS, who teaches Glass Architecture at Ecole Nationale Supérieure d'Architecture de Nancy (ENSA Nancy) in France, defines in which position the Pergola of the Club at NINE BRIDGES stands in history. He looks into the architectural history of the modern botanical garden such as Charles Rohault de Fleury’s 1833 large metal greenhouse and Joseph Paxton’s the Crystal Palace. As the architectural thinking that started from the 1800s reaches to the early 20th century, various studies on glass and the garden have been conducted in relation to culture, industry, commerce, art, and environment. Then he brings in case studies such as the greenhouse at Cité des Sciences et de l'Industrie, Davies Alpine House, and the construction of Bombay Sapphire Distillery. He said that the Pergola of the Club at NINE BRIDGES stands in continuation, in line with these architectural studies. He explains that in the Pergola of the Club at NINE BRIDGES, “A project that is architecturally transparent (carried out through a process of international industrial collaboration) there are no shortage of reminders here of the quality realised by the glass architecture of the past.”

In the section titled ‘Architectural Structure and Innovation through Digital’, ILJIN Unisco explains the ways to minimize errors and the precise manufacturing of construction components when designing an irregularly shaped building. ILJIN Unisco has invested time and cost to study the method of manufacturing precise 3D shape. It is the company that constructed buildings with unique shapes such as DDP, CJ R&D Center, GT Tower, and the Federation of Korean Industries in Yeouido. The structural frames of the Pergola of the Club at NINE BRIDGES follows its form and inserted mechanical, fire protection, electrical, communication, and system equipment to unravel the function and form into the same language. Therefore, it required even higher methodology than the previous projects. So ILJIN Unisco used a software program named CATIA in the processes of design, manufacturing, assembling each different construction components, and construction planning. Numbering construction members and error-free manufacturing of each components show the completion of the contemporary architectural technology.

Professional terms such as CATIA and MEP may feel relatively difficult for readers. However, if they go through the texts along with the images and drawings that are included in between, it will be an opportunity to approach the new technology a bit easier.

CJ E&C, the company in charge of the construction, compiled the records from the year of 2016 to the completion of the construction in Jul. 2017. This description of architectural process enlightens about how much efforts and struggles had occurred even before the construction started, and how obstacles were overcome in the midst of lacking field conditions.