[Essay] A Constellation of Human and Architectural Life 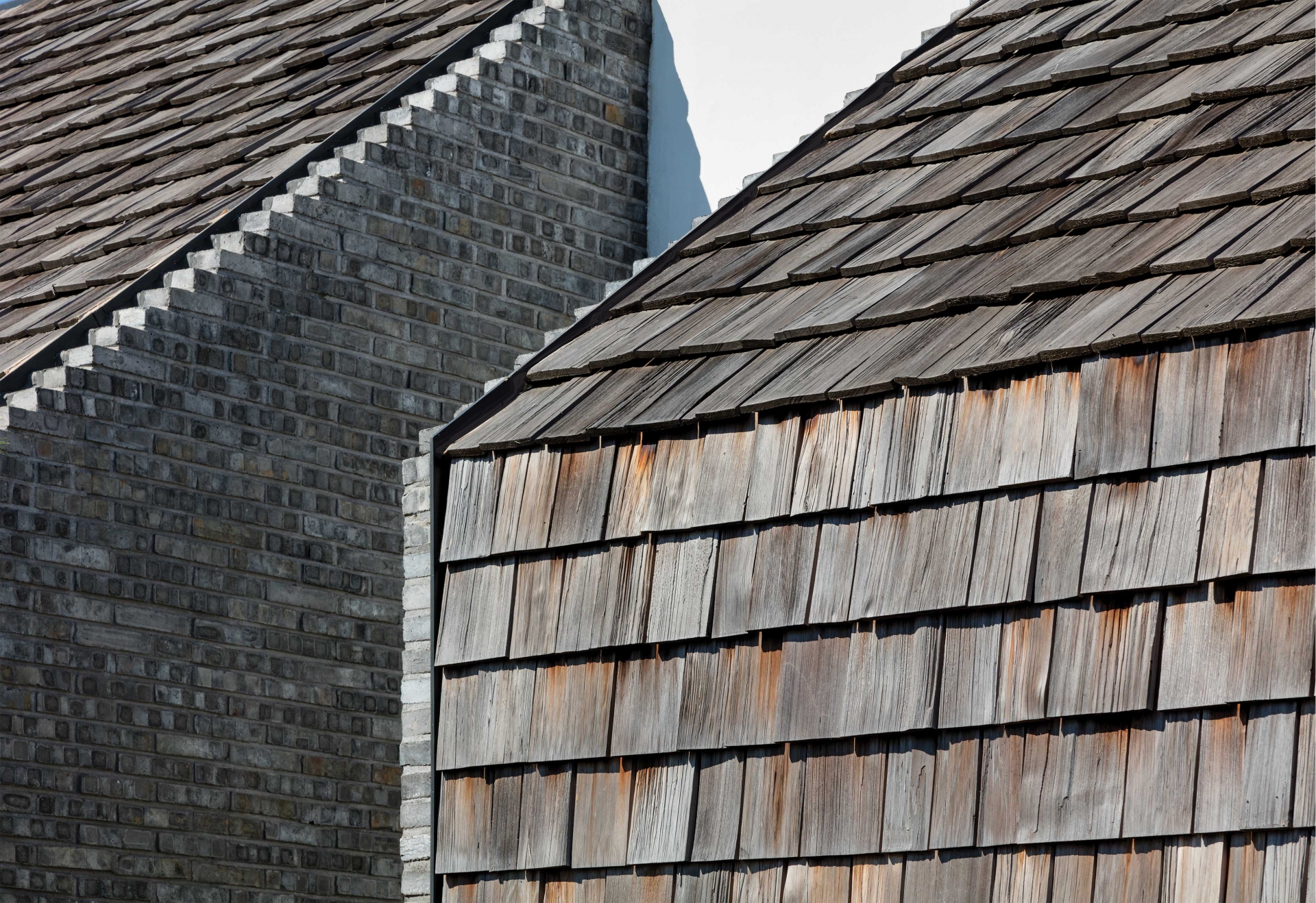 Another Reality Generated Between Virtuality and Reality

The constellation is a concept mankind has continuously turned to throughout history, after observing the sky from time immemorial. In fact, the stars that form a constellation are those that constantly move in space individually with their mass, gravity, and orbit. Besides, they are thousands of years or even hundreds of millions of years apart, so the light emitted by each of them does not exist in the same dimension. However, in human life, they are approached as intense wavelengths and influences physically and emotionally. Above all, they create a beautiful meaning. They are virtual and real at the same time. I think that the human life – which forms any society or community – and that architecture – which is a place (a space in time and a field of perceptual experience) – interact in a way similar to the constellation.

This is especially true when designing houses to meet with the specific conditions of human life. When listening to each family member’s undisclosed dreams, overlapping life patterns, and desires for a home, I feel as if they are similar to the stars that each have a different time and orbit. All of a sudden, I feel like I have become an ancient astrologer, observing the stars. As the diagramming of the individual process in the larger diagrams show signs of vibration and create large spirals, I glimpse motifs with the joy of a wise alchemist. It presents a scene of awakening between virtuality and reality. Of course, the real-life at this moment is a process that is continuously generated (devenir) within the passage of time, so architecture must evolve with a plasticity like that of an organic matter. As such, the architectural process is nothing but a way of producing a way of narrating people’s most deep-seated dreams and condensed desires, embedded in society, by programming the architect’s practical diagram and implying ‘potential possibilities’ in the real world.

Since 1855, Lewis Carroll’s Alice's Adventures in Wonderland has inspired many story writers and picture artists, and has been published in one of the greatest number versions known to literature. There can be many reasons for this, but it must, above all, be because various events and stories characterised by a linguistic playfulness and fantastical characters form a certain paradigm of the imagination in people’s perceptions and sensory experiences. Although 150 years have passed, this wonderful classic adored by children and adults alike, is repeatedly generated with the addition of pictures and stories and dramatised, is the generating source of my architectural construction. This is why I describe the design process as ‘Alice's Bubble as a Self-Generating Diagram’.

This expression was prompted by the desire to spread lively life stories into our physical world. Bubbles as procedural diagrams attempt to organise a more flexible drawing, in order to break away from the existing form and promote new architectural adaptations. Bubbles floating in virtual space function as a flexible New Architectural Form – which create infinite new agencies and a new type of architecture based on circumstances – rather than being held as a fixed form. This concept is in disjunction with the process of multiversal placing, as a provisional answer to the question of what architecture should preserve in our era.

The concept of ‘multiversal placing’ is the third path derived from the ‘Society of Rooms’, which privileges the unique characteristics designed by Louis Kahn and the ‘Universal Space’ of Mies Van der Rohe. In Kahn’s unit of space, in which a group of single, independent, and crystalline moments of sanctuary are gathered, a Polychromatic Intimacy can be maintained. A flexible disjunction may be blocked because each room is fixed in its own hierarchy and order. On the other hand, the Plan Libre proposed by Mies has the merit of providing a mutual spatial homogeneity and variability as distinguishing open space. Still, this neutral space often becomes a scapegoat in a standardized apartment culture and the irresponsible rental practices prevalent in a contemporary capitalist society. Multiversal placing exists as a machine de désir, in which the rooms of plasticity – enhancing the polychromatic intimacy of each member of the house users – flexibly interconnect and generate relationships.

A Field of Self-Generation Captures an Intimate Universe

Inside the house presented as a building of ‘multiversal placing’, the family lives their day as they go through an event created by characters and episodes. The house is the stage and set within which the sitcom unfolds. Scenery is a place in which users can independently produce and distribute an infinite amount of content – it is the eternal ‘Story Becoming Place’, where each story can collide with another to create a new story. It is also the continuous ‘Connecting Field’ where various entities actively desire and cross-penetrate. With this, architecture goes beyond the concept of acceptance as a physical reality. Architecture is a way of becoming, containing various human programmes in a superimposing manner and rearranging the site anew. The architect builds the set in which the lives of the members, the users of the house, plays out. The scenery carries potential, weaving the lives of the family and actualising a new story every moment, dreaming as it builds over time.

Recently, I was invited to a house that was built for the Yeoncheon DIASPORA project. The ambiance was quite different from the structure and usage examined by users when they first moved into the house. The family encounters the use of unfamiliar spaces at every moment, building up new stories, and creating a new scenery of their own. The basic framework presented as a gene for this project and numerous void volumes perform a spiral movement in their own colour and rhythm. The family living in the Suseo self stack flow & stay remains within their own intimate and singular universe, and live as curators that develop and categorise the diversity of the members with flexibility. Residents living in the Haengdang Patema Inverted will share their lives with other people in the market, developing and evolving the status of their own intimate space. Space, in this manner, weaves through people’s lives in new ways and reorganizes its own patterning.

Now, through multiple collisions between heterogeneous situations in the city, the architecture will move towards a new Flexible Auto-Poeisis Forming that upholds the self-referentiality of architecture. The self-generation of entities that create diversity and difference in everyday life repeats the process of collision, bonding, extinction, generation through the bubbles, offering a multivalent story with various forms of vacuum energy. In this way, it will draw a flexible topography in reality. Through the process of guiding virtuality to actuality, the stories generated in each project become episodes. It exists as a light and flexible bubble that scatters and is combined in the air, but also desires to be reborn in the form of regeneration required by the era. Bubbles become a single genetic character as they go through the implications of various stories, and they repeat their birth in different traits as they relate to several genes. This process of generation will make the material world a colourful place enhancing everyday life. Through these floating bubbles, we aim to propose a ‘new form of architecture’, and change the city in which we live into a lively place rich with the stories of everyday life.

Sketch of Self Stack_ Flow & Stay​​ 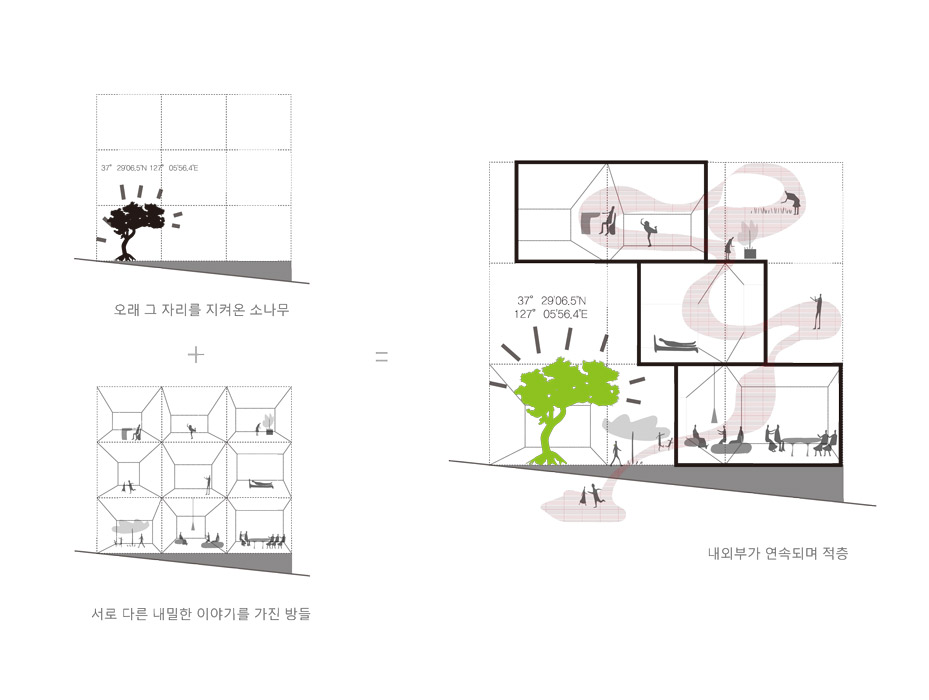 Diagram of Self Stack_ Flow & Stay

Kim Dongjin
Kim Dongjin graduated from Hongik University with a Bachelor’s degree in Architecture, gaining practical experience at SAC International, Ltd, and studied at the École Nationale Supérieure d'Architecture de Paris-Belleville. He has been working as the principal of L'EAU Design since 2000, and has been a Professor of Architectural Design in the Department of Architectural Engineering at Hongik University since 2005. His major works include Gongju ‘Park Adhocracy’, Suseo ‘self stack flow & stay’, Nonhyun ‘Matryoshka’, Cheongdam ‘March Rabbit’, Jeju ‘Bayhill Pool and Villa’, and Chengdam ‘Bati-ㄹ’. He won numerous architectural awards including the 31st, 38th, and 42nd Korean Institute of Architects Awards, the 25th and 33rd Seoul Architecture Awards, the 1st Young Architect Award, the Architecture Master Prize 2019 in the U.S., the Iconic Award 2015 in Germany, the 7th and 9th Gangnam-gu Beautiful Architecture Awards. He has been invited to contribute to domestic and international architectural exhibitions such as the 2016 15th Venice Biennale of Architecture with ‘The Far Game’, the 2014 Berlin International Exhibition in ‘Seoul, Towards a Meta-City’ in Germany, and the Korean Modern Architects Asia Touring exhibition, ‘MEGACITY NETWORK Japan, China’ in 2010 and 2011.
No.626 January 2020 architecture architect Kim Dongjin L’EAU design Diaspora Self Stack_ Flow & Stay Patema Inverted constellation Generates Stories diagram
LIST
bookmark_border
favorite_border
12