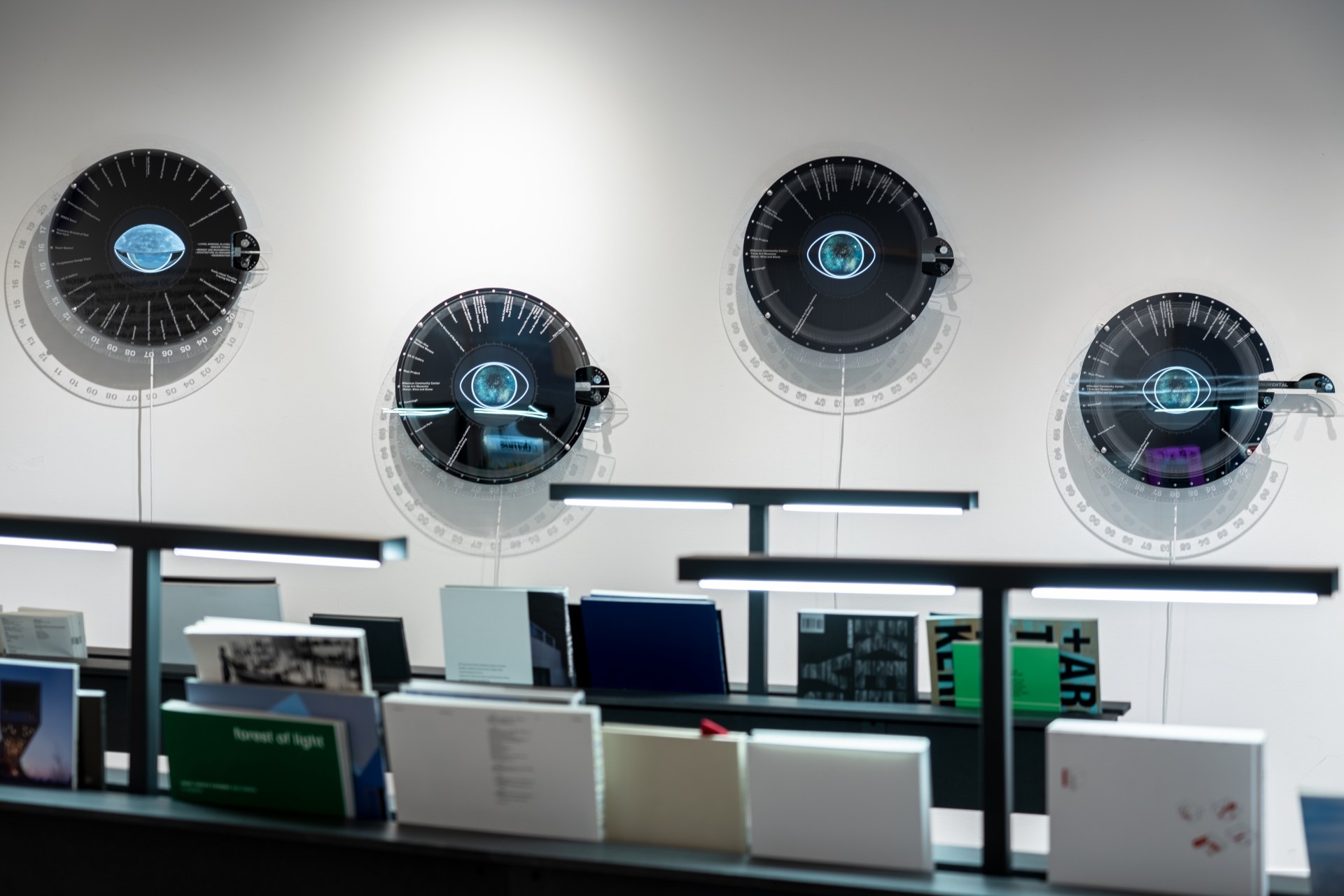 Pai Hyungmin, the head curator of the exhibition Contemporary Korean Architecture, Cosmopolitan Look 1989-2019 (hereafter referred to as ‘Cosmopolitan Look’), held to commemorate the 30th anniversary of the diplomatic relationship between Korea and Hungary, wrote in a recent email to all involved parties that ‘10 years after the “Megacity Network”, a Korean contemporary architecture exhibition of comparative size will finally be held’, also offering his end of year wishes. ‘Megacity Network’ is the name of another international Korean contemporary architecture exhibition that was held 12 years ago, in late 2007, at the DeutschesArchitekturmuseum (DAM) of Frankfurt, Germany, as its starting point before moving onto Berlin (Germany), Talinn (Estonia), Barcelona (Spain), and the Gwacheon hall of MMCA (Korea) in late 2009. Having attended both exhibitions, I wanted to view ‘Cosmopolitan Look’ with a retrospective eye, by coursing back over this 12-year old memory.

The biggest difference to that of the memory was the role of the participating architect. In ‘Megacity Network’, the architect was required to play a primary role. Sung Hong Kim (Professor, University of Seoul), the past head curator, implored the participating architects to become involved in the exhibition in a number of ways via multiple projects, while developing their own contingent exhibition projects simultaneously. Although the Korea Architects Institute stepped in to take over the organisation and management, a significant portion of exhibition design, promotion, fund-raising, publication, and other specific tasks had to be completed by the participating architects themselves. For instance, I was participating as ‘Exhibition Coordinator’ with Cho Namho (Principal, Soltozibin Architects), and I was given the task of designing the entire exhibition and mediating between contributing opinions. We also had to do the installation work ourselves along with two other office colleagues by arriving at the site a week earlier. Of course, we also had to manage our own exhibition project as well. As it was the first time for DAM to propose and secure an exhibition like this, the given conditions were not all very accommodating. However, the lack of a dedicated manpower and infrastructure was a reality that we simply had to accept. 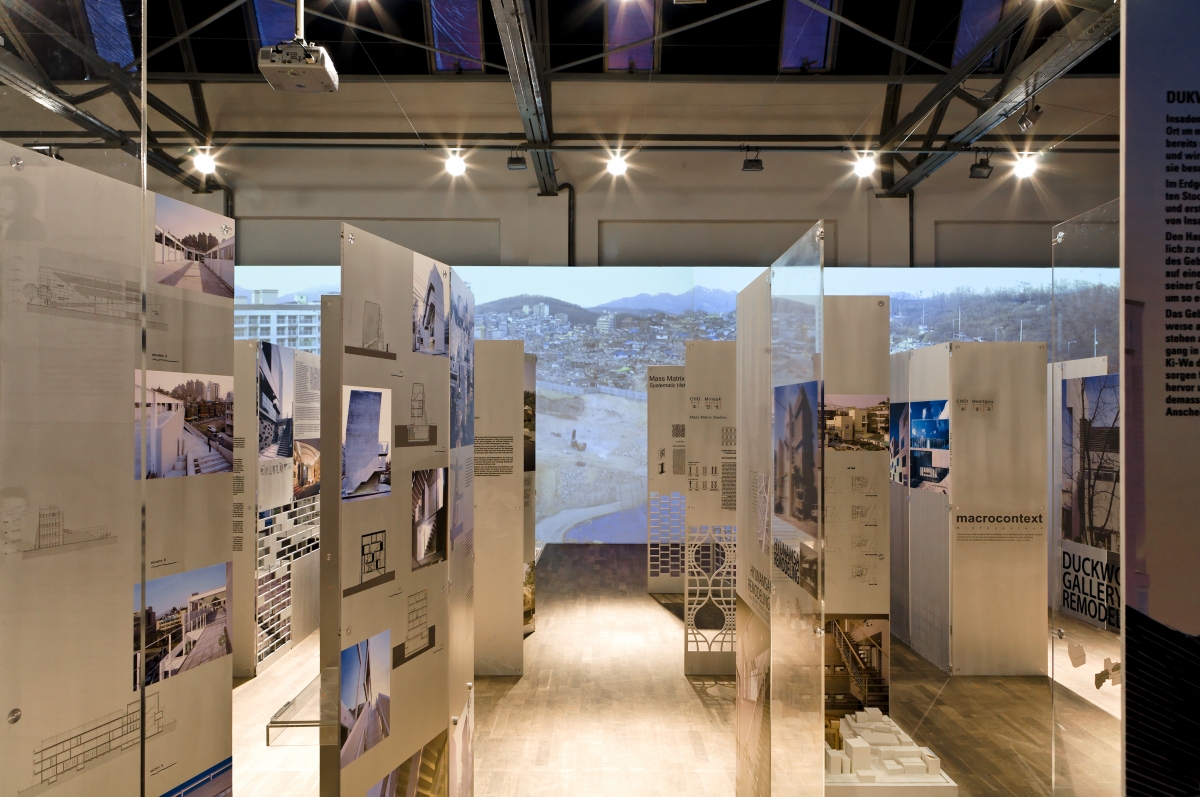 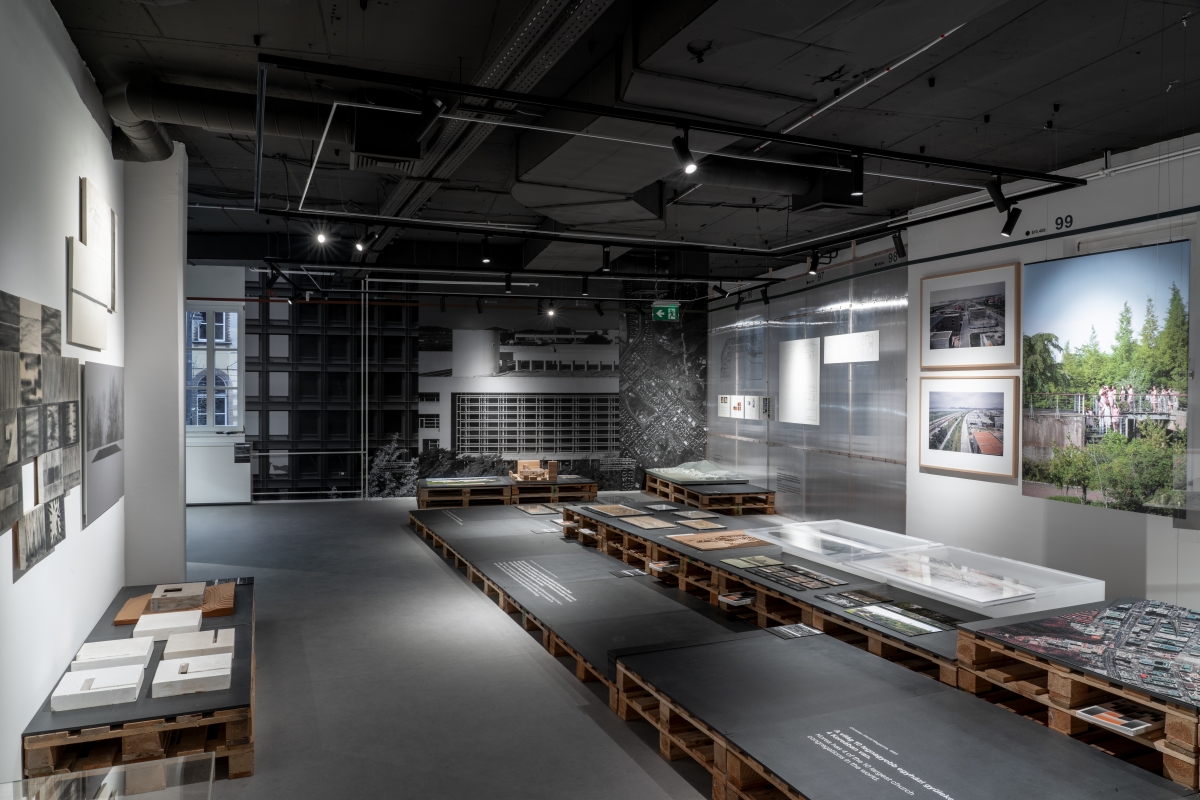 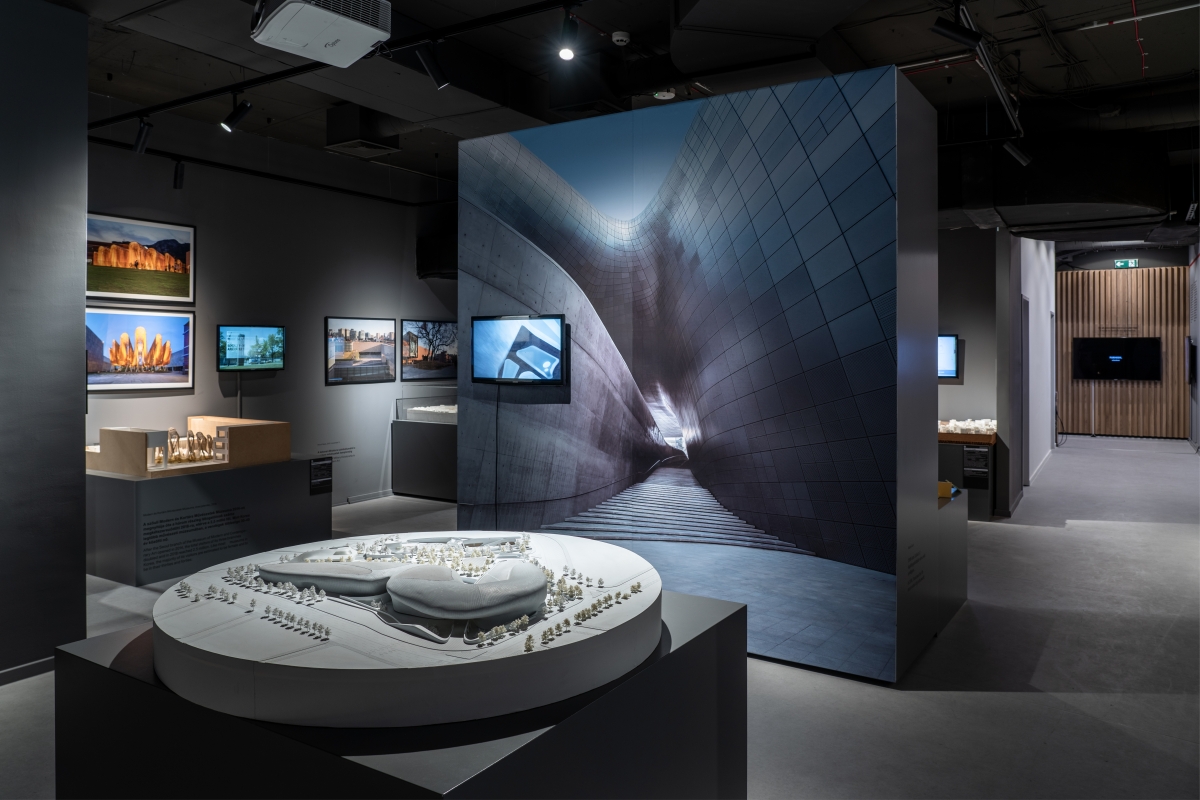 It was a wholly different situation at ‘Cosmopolitan Look’. First, the exhibition design and installation were conducted as completely independent phases. To put it simply, the participating architects only had to focus on preparing and submitting their own exhibition projects. Looking over the list of involved parties — apart from the participating architects —who were involved in planning and managing the exhibition, one can see that there has been a significant growth in terms of base and external relations within the Korean architectural world when compared to the ‘Megacity Network’ era. Not only has Korea become one of the regular contributors to various international architectural and urban-related events, such as the Venice Biennale, it now has several architecture-related foundations such as the Mokchon Kim Jungsik Foundation — which also co-sponsored this exhibition — and moreover, it has drawn international architects to its activities through events such as the Seoul Biennale of Architecture and Urbanism since 2017. In this way, there has been a substantial growth in exhibition-related experience and a number of locations for holding exhibitions. ‘Cosmopolitan Look’ is the cumulative result of all these series of processes. However, it goes without saying that it still remains as a task to see how this hard-earned basic infrastructure will continue to grow and develop in the future.

Another difference was in the intra- and extra-national conception of Korean architecture. At the time of ‘Megacity Network’, the intra-national discussion regarding Korean architecture—that is, the debate on what is essentially ‘Korean’—was continuously in the background. For example, there were some complaints raised by certain participating architects, questioning how the physical aspects adopted by the exhibition panel composed of metal and transparent acrylic is representative of a ‘Korean’ condition. Even though our intention was to present the spatial experience of a Korean contemporary city to the exhibition hall through an open and layered spatial composition, this was something that required a great deal of persuasion. Ultimately, our final decision was to have the architectural content pursued by architects incorporated in their works while highlighting a distinctive ‘Korean’ element. In contrast, as far as I know, there were no such discussions during the preparation stage for ‘Cosmopolitan Look’. In reference to a report document, ‘Cosmopolitan Look’ was first intended as an exhibition that would ‘focus on the urban city and residences, the changes to industry and population, and the fundamental principles of architecture’ from a ‘transnational perspective’. Each participating architect was given the role to play their part within this unified theme structure.

In terms of the aesthetics of the exhibition, the overall design of the ‘Megacity Network’ featured homogeneity and smoothness, while the works of the participating architects revealed a sense of plurality in accordance with each participant’s choices and inclinations. In contrast, ‘Cosmopolitan Look’ deliberately pursued the properties of dynamicity and diversity all the way from the exhibition design to the individual exhibited works. If BARE’s installation at the entrance depicts a sense of clockwork-like orderliness, the wooden palette stacked within the exhibition hall presents the raw physicality of the site. The exhibited works were all positioned 3-dimensionally, so that they might as though they are floating in a dark room. The walls are decorated with a historical timeline dating from 1989 that list key historical events in Korea, and this information contextualises the adjacent exhibition work within a specific historical point. What was personally most impressive was the relationship between the building’s composition and facilities and the exhibition works. There was a feeling that some works were becoming rarefied to the point of becoming a part of the building itself, as though the boundary between them had been intentionally erased. It was as if these otherworldly exhibition works were blending into the building itself. It was a completely different approach from that of ‘Megacity Network’, which sought to define a strict boundary between the building and the exhibition work in all spaces. However, the two exhibitions were similar in that neither placed a boundary between the individual exhibition works to recreate the scene of an actual urban space in which things overlap or stack on top of one another.

Another point in which ‘Cosmopolitan Look’ differed from ‘Megacity Network’ was in the way that local architects connected with one another. Although seminars and other auxiliary events were hosted as part of ‘Megacity Network’, the exhibition was mostly driven by a more one-directional notion of ‘introducing Korean architecture’. In ‘Cosmopolitan Look’, however, there was not only a separate event in which Korean and Hungarian architects could observe and understand each other’s works, but the 3-day exhibition was also crammed in additional events such as an opening ceremony, two seminars, a city tour, a Pecha Kucha, and other official initiatives. What remains the most memorable element of these 3 days is that, while Korean architects showcased their ability to develop noteworthy works especially in terms of the assimilation between technology and architecture, with a focus on creating an in-depth interaction with social programme, Hungarian architects revealed their strengths in terms of interpreting the historical context and revealing the craftsmanship of their architecture. However, the realisation that Hungarian contemporary architecture was not as significantly advanced, when considering its various cultural accomplishments and the position that Hungary occupied throughout history was unexpected. Nevertheless, a notion of this was somewhat detected in the city tour that was held the morning after the opening ceremony. It might be that we were only exposed to a limited part of the picture, but it seemed that the spirit of modern and contemporary architecture in Budapest was not as present as in other European countries, even in relation to its eastern European neighbour, the Czech Republic.

Another memorable thing was the wide age range of the participating architects. Compared to the 16 architects who participated in ‘Megacity Network’, the age distribution of 30 or so architects who participated in ‘Cosmopolitan Look’ was approximately much wider. In this exhibition, there was a spectrum of architects of different ages ranging from seniors to those who are in the middle and also newly-arising. Perhaps this was due to the difference in the theme. While ‘Megacity Network’ was about introducing different kinds of architecture, which composes an inter-relational network within a megapolis from a contemporary standpoint, ‘Cosmopolitan Look’ is about comprehensively embracing past changes on the Korean architectural scene since 1989, when diplomatic relations between Korea and Hungary was established with the dismantlement of the eastern European bloc. In that sense, the wide range and diversity in terms of era and architecture composition was inevitable. 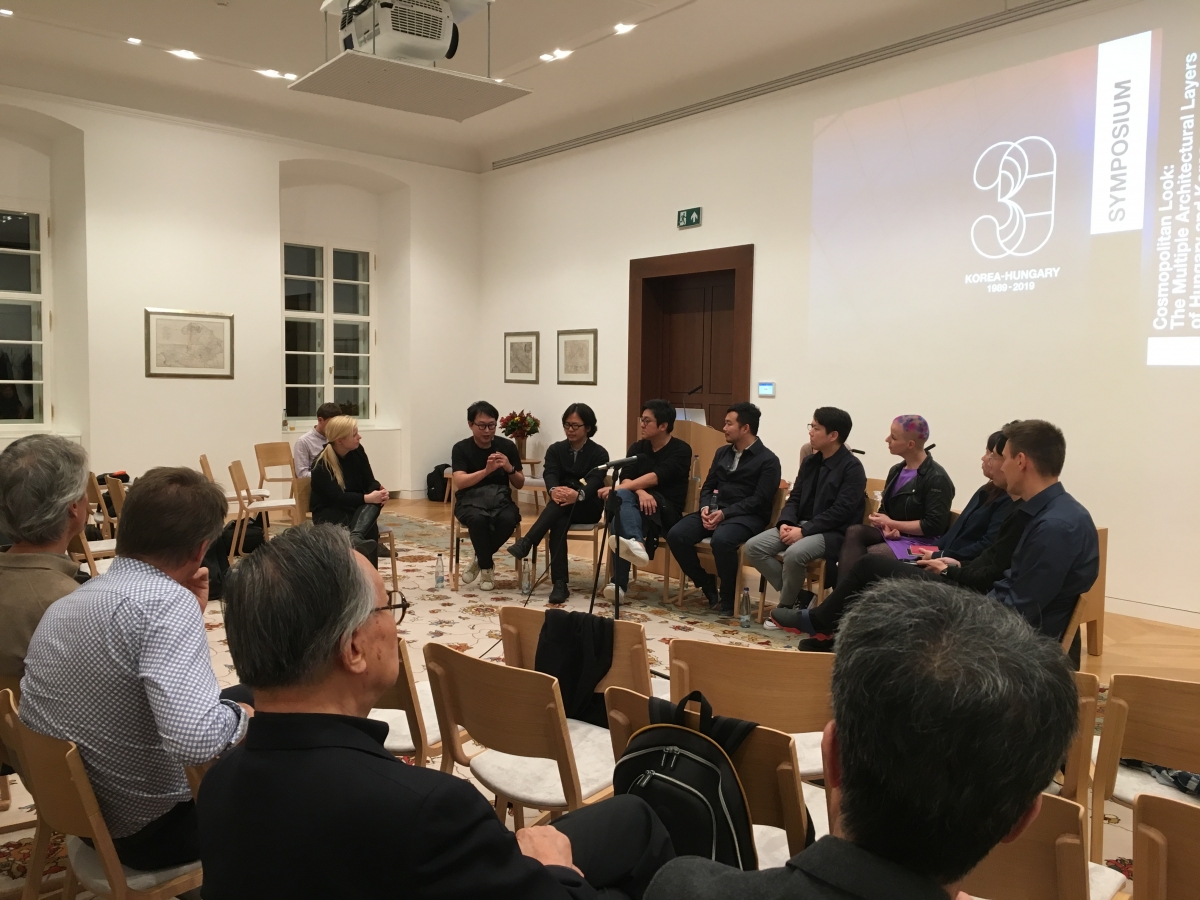 I heard that ‘Cosmopolitan Look’ was one of the first exhibitions to be hosted by the Korean Cultural Centre at Hungary in its new building. I also heard that this cultural centre is third in size of other cultural centres outside of Korea, and in addition to this, the centrality of its location within the old city was a cause for the participants to feel a sense of satisfaction. While this might be due to the rise of Korea’s diplomatic position, it also surely weighs upon how Hungary had proactively initialised ‘Nordpolitik’ diplomacy in 1989. Having secured high-quality hardware, I believe that it is now the matter of creating the software of a corresponding quality for the cultural centre to fulfill its role in promoting Korea to Eastern Europe.

If one were to query the remaining tasks for ‘Cosmopolitan Look’, it would be to initiate a touring exhibition at a different location once this exhibition at the cultural center concludes in February 2020. This exhibition began with pre-set conditions, such as the Hungarian and Korean Cultural Center as its location, but its planning and design already entailed a significant universality. For example, while the exhibition methodology, in which time, space, and its themes were multi-directionally enmeshed by the ‘streets’ that traverse the exhibition hall, was adopted due to the given spatial property of the cultural centre,  this feature also simultaneously possesses flexibility and a visible spectacle that can be recomposed for a completely different setting. It is hoped that this exhibition will be able to travel to other European countries and even elsewhere in the world. When considering the total effort and talent put into this exhibition, one would have little doubt about this possibility. It is known that certain regions in South America are already being considered at its next home. The fact that the ‘Megacity Network’ could tour four European cities ten years ago, in spite of the ongoing global financial crisis, was largely boosted by the presence of interest towards the newly-rising Korean architecture. As a living witness to how Korea has stepped beyond an era of discovery, to become a key player in global architectural scene, it is hoped that this ‘Cosmopolitan Look’ will be able to lead Korea one step further. 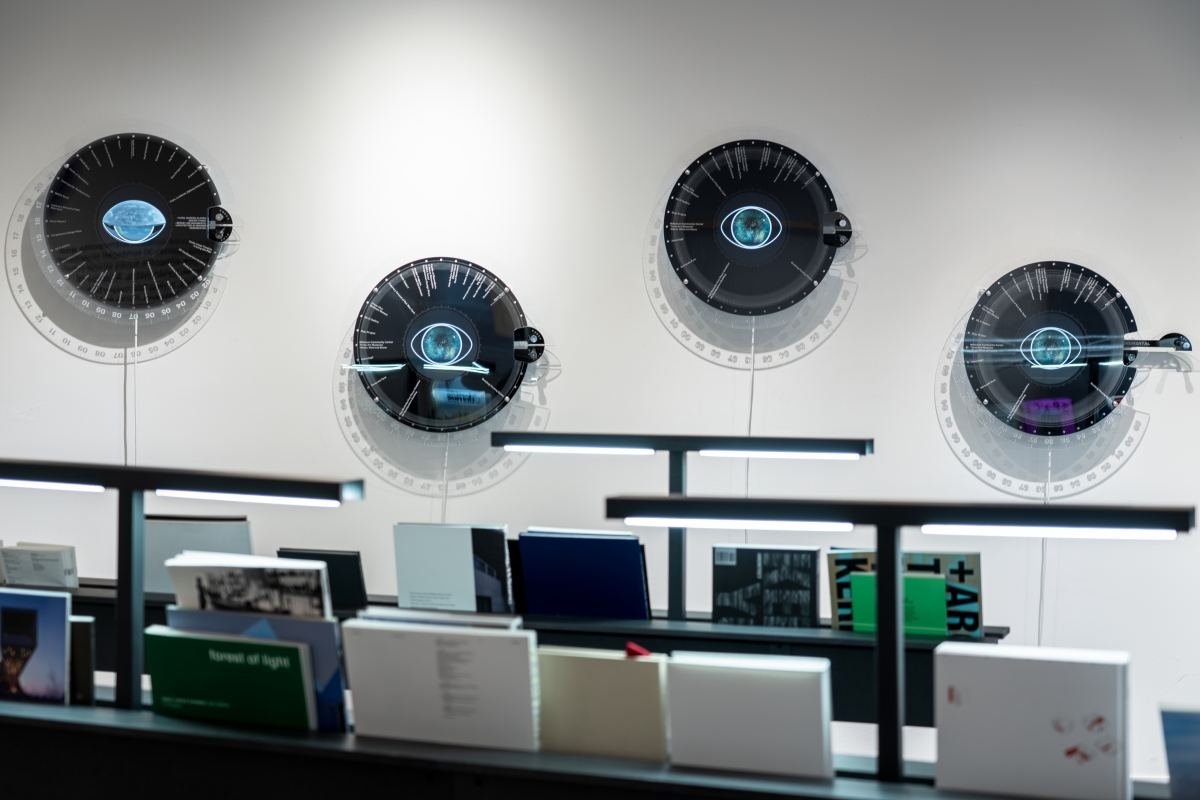 Hwang Doojin
Hwang Doojin was born in Seoul, Korea in 1963. He studied architecture at Seoul National University and Yale University. Having worked in Korea, Japan and the US, he founded his own practice, Doojin Hwang Architects, in 2000. Hwang sees architecture as a dynamic dialogue between the programme and milieu, with geometry as the mediator. This approach has made it possible for him to deal with both contemporary and traditional projects. His architecture seeks to surpass simple formalism. Hwang has authored a number of books on architecture and urbanism; he has also lectured and exhibited extensively both in Korea and abroad.
No.626 January 2020 architecture MMCA Mokchon Foundation Korean Cultural Center in Hungary exhibition Contemporary Korean Architecture Korean Cultural Center in Hungary Hungarian architects
LIST
bookmark_border
favorite_border
23