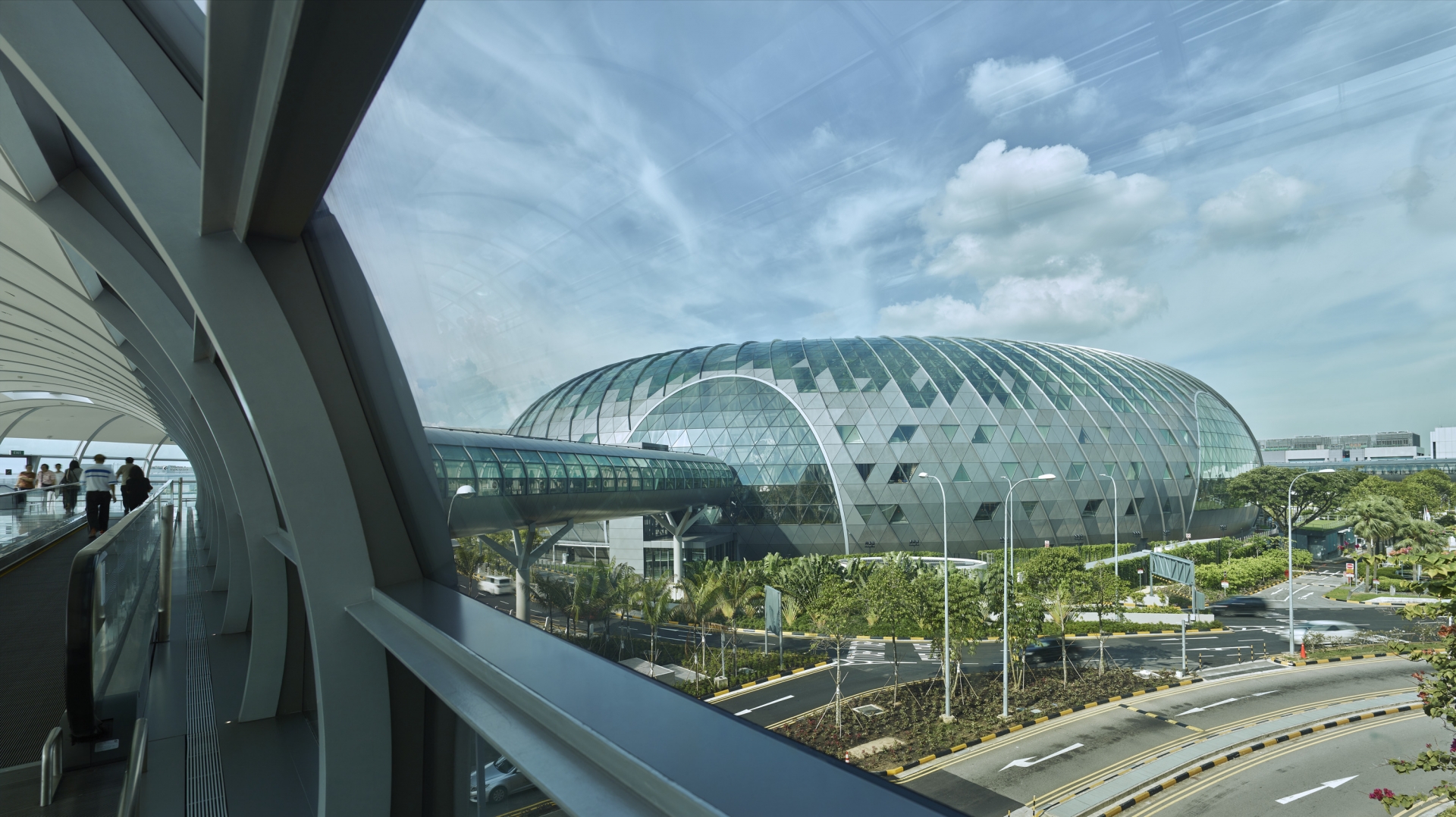 Lee Sungje (Lee): Jewel Changi Airport (Jewel) has established a new paradigm for community-centric airport design. Not only does the airport serve as a transit hub – the primary function of the international flight hub – but also features an indoor garden and a commercial complex used by the travelers and the public. Could you elaborate how you came to invent the prototype for the building?

Safdie Architects (Safdie): The request for proposals outlined the basic functional components—airport operations, restaurants and cafés, retail offerings and an un-defined ‘attraction’. More than any other great city in the world, Singapore is truly a city in nature—what could be more quintessentially Singaporean than a grand public garden? Jewel combines two environments – an intense marketplace and a paradise garden – to dynamically assert the idea of an airport as an uplifting and vibrant urban centre.

Lee: Jewel has created a huge indoor garden including the Forest Valley and Canopy Park. It also features the tallest artificial waterfall, Rain Vortex. Does this have anything to do with the identity of Singapore—the City in the Garden?

Safdie: Jewel is a bespoke design, crafted in response to the design brief, its particular location and its setting. Local culture, heritage and climate informed the design. That being said, to create Jewel is to conceive of a design in which architecture and landscape are totally integrated. Landscape is not an add-on feature, or an optional embellishment, but rather a fundamental component of space. Its deployment creates the opportunity for a new kind of spatial experience, one that specifically echoes and celebrates Singapore’s reputation as the Garden City, but, at its heart, is a humanistic response that is not bound to a particular locale.

Lee: I would like to ask for your further explanation of the spatial composition and the circulation. What facilities are accessible to in-transit passengers and Singaporean citizens respectively?

Safdie: Through its programming and attractions, Changi Airport has moved beyond the idea of an airport as purely a transportation hub. No other airport, no other transportation hub is so completely an extension of civic life. Changi has long been a place in which the community gather and celebrate. Jewel transcends this notion even further by creating an interactive civic plaza, for travelers and Singaporeans alike. It’s positioned outside the terminals, before security checkpoints, and directly linked to public transportation, and so it is entirely publicly accessible. Directly connected to Terminal 1, 2 and 3 via pedestrian bridges, Jewel engages both with in-transit passengers as well as the public at large.

Lee: What was the most difficult aspect of your project? And how did you solve the problems arising from this?

Safdie: We speak to the many challenges of the project rather than a singular challenge. Because the building design integrates many issues into a singular overall geometry, each decision integrally effects another decision. Of the many challenges to the project, the design and fabrication of the one of a kind diagrid roof structure, designed in collaboration with BuroHappold Engineering (BuroHappold) in New York and RSP Architects Planners & Engineers in Singapore, was foremost. The roof geometry is complex—an elliptical plan was formulated to maximize the extent of the building on its rectangular site, and an asymmetric toroidal geometry in section, shifted southwards so as to position the low point of the roof (our waterfall) and to miss an existing people mover train that travels through the building and the interior forest.

Under the construction / Image courtesy of Safdie Architects​

Lee: The doughnut-shaped geometry of Jewel and its column-free interior instantly catch our eye. I think, when designing this type of architecture, the design should link closely with its construction method. Please expand upon your design process.

Safdie: To realise this groundbreaking vision, we led a global collaborative endeavour between the best minds from the fields of engineering, landscape architecture, water feature design, and interior design. Working together towards this common vision, the concepts for Jewel were developed and implemented.

BuroHappold engineered Jewel’s steel structure and developed the building’s facade systems. The team took on the never-before-seen glass and steel roof structure, which spans more than 200m at its widest point and employs only intermittent supports in the garden, resulting in a near column-free interior. The geometry of the roof is based on a semiinverted toroid, or doughnut, with an indoor rain-fed waterfall at its centre sealed with a continuous ETFE cushion. BuroHappold worked with the team and specialist subcontractor MERO to develop the ‘Jewel node’, the precision steel connectors that make up the diagrid roof system. The components were prefabricated in Germany and bolted together on-site in Singapore.

Lee: I would like to hear further explanation of the roof structure. Please detail the structural system—how is the entire load of the roof carried down to the ground?

Safdie: The design of the roof is a single layer add-on system comprised of 9,000 custom cut triangular double glazed unit (DGU) panels positioned over a triangulated steel diagrid structure. The roof has a singular shell language, rather than say multiple structural solutions from one side of the roof to the other. The DGU sizes were determined along a maximum dimension of approximately 2,600mm measured diagonally, which was a size commonly found between several major suppliers. This sizing then determined the maximum steel roof triangular diagrid ‘bay’. An additional 2,750 metal panels complete this enclosure design. The shape of the building is toroidal, and no two facade panels are the same. The steelwork that supports the glass is a ‘stick and node’ system, made of over 50,000 individually cut custom components and erected on site piece-bypiece.

The entire system, including glass panels, steel members and the customshaped solid steel nodes were fabricated directly from the design team’s computer model by computer numerical control robots. The components were produced off-site and then shipped to Singapore in containers. Special labels with scan codes were used on all the components to assist when locating their final position in the building, and to reduce the direct manpower required on site. The result of this innovative methodology was to cut the roof construction time to only 20 months, from start to finish.

Lee: Safdie Architects has designed large-scale residential and commercial projects around the world in addition to the Jewel. The work has always left a strong impression on visitors with unique spaces, geometry and new prototypes, what kind of experience did you aim to offer in this project?

Safdie: Jewel offers a new kind of public realm, an interwoven experience of people, nature and commerce. It asks us to re-think what an urban center can – and should – be.​ 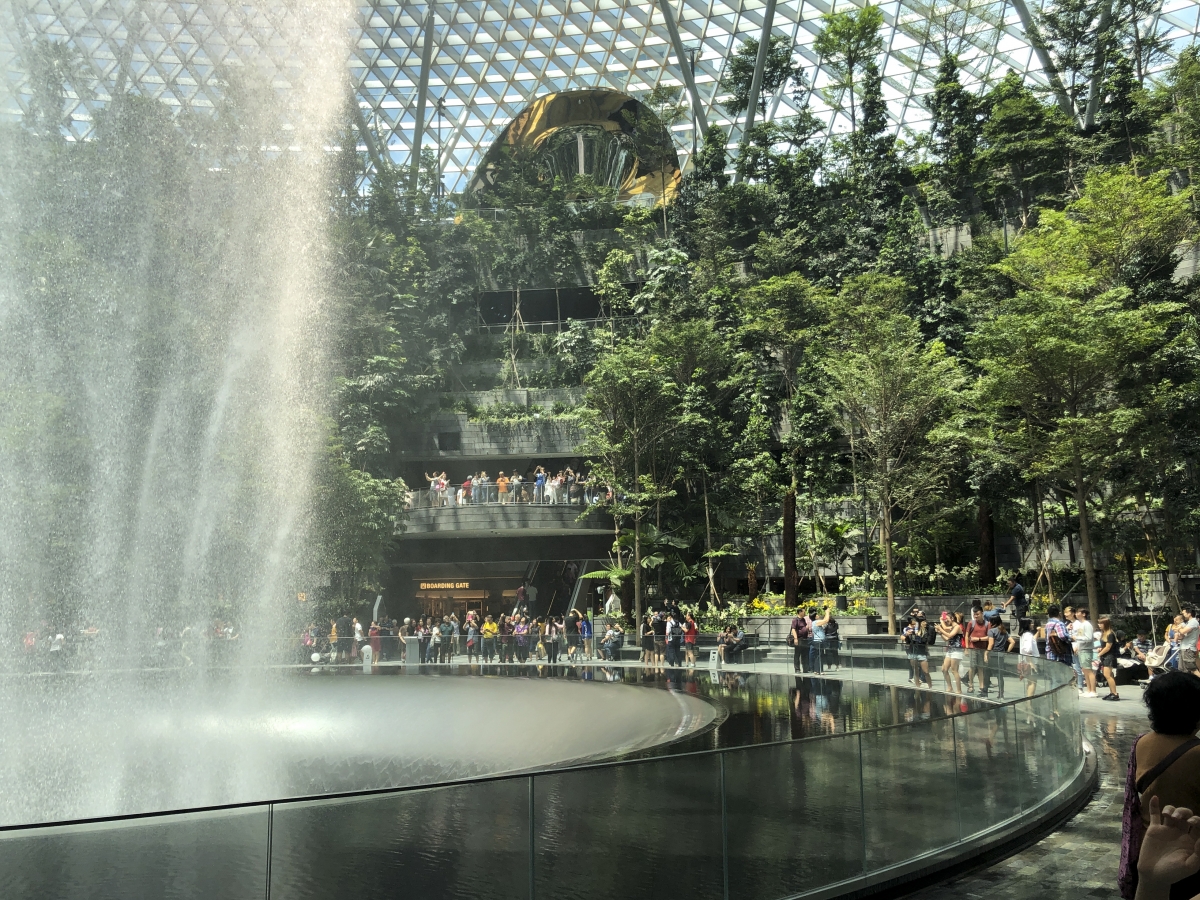