[Essay] The Bauhaus: Out of Nowhere

The New Building and Auditorium of the College of Agriculture, Seoul National University​ ©liukuns ​
Kim Hi Choon visited the University of Minnesota from September 1956 to January 1957. At that time, Ralph Rapson was head of the architecture school, appointed in 1954.▼4 Rapson taught architecture from 1942 to 1946 at the Institute of Design in Chicago, which has its origins in the New Bauhaus founded by Laszlo Moholy-Nagy, a teacher at the Bauhaus. Furthermore, Rapson worked until 1954 in the MIT, which is located along with Harvard University in the city of Cambridge, the new hub of the Bauhaus with the efforts of Walter Gropius and Marcel Breuer. Of course, these brief encounters and vague connections do not directly link the Bauhaus in the 1920s with the New Building of the College of Agriculture at Seoul National University in the late 1950s. They, however, illustrate the circumstances of the era that led to the Bauhaus moving its base in the 1930s from Germany to the United States, from which the International Style spread to the states of the ‘free world’, including South Korea. The more important point is that, not so long after the War had ended, the architect in charge of designing the new campus building in South Korea went beyond the matter of simply ‘building’ with modern materials and structure, in spite of the constraints of the budget and technology: he strived to express a new architecture without being bound to old practices and ideas. Here one can see the idea that the functional and asymmetrical building like a factory building, not a neoclassical or Gothic edifice, could become a university building in a new era.
Kim Il-sung University Building No. 1, 1965
Kim Il-sung University was founded on 1 October 1946, a year after the establishment of Seoul National University. In 1948, two years later, as the main building was completed, it finally fulfilled the necessary conditions of a university, but it was severely damaged by the Korean War. In 1954, the destroyed main building was restored, but the campus was still in need of expansion. In the 1960s, Kim Il-sung University embarked on a campus expansion around the existing main building, as a campus with modern buildings on a large site of 1.56 million m2. The Building No. 1 was the first building to be built according to this plan. Completed in 1965, Building No. 1 is a large-scale building with a total area of 46,000m2, and related subjects such as the department of geography, geology, and biology are located. A total of five buildings with different heights were consecutively arranged in an orthogonal sequence of ‘A-B-A-B-A’.
This asymmetrical building is the result of combining programmes that require different functions such as laboratories, lecture rooms, office space of different departments, along with the daylight consideration. The nine-story building, positioned in the centre of Building No. 1, and those at both ends were all stretched lengthways in the north and south directions. Meanwhile, another two buildings have been stretched width-ways in the east and west directions, accommodating lecture rooms and offices. Rooms were positioned on the south side to obtain maximum daylight; corridors were displaced on the north side, since it is adjacent to a large street, exposed to noise. Laboratories were mainly placed in the building that are at the centre of the building.
According to the arrangement of the programmes, each different department was integrated around the laboratories.▼5 The Building No. 1 also lies on an uneven hill. This height difference, which was created on the ground level, produces a more colourful effect on the elevation. The building programmes, daylight conditions, and geographical features are all significant contributing factors in determining the plans and masses of the Kim Il-sung University Building No. 1. Aesthetic elements, of course, are reflected in the design. The Building No. 1 faces directly to the large road coming from Wonsan to Pyongyang: an asymmetrical form would have been preferred in order to gain a more dynamic effect as opposed to a more static appearance when viewed from moving vehicles. 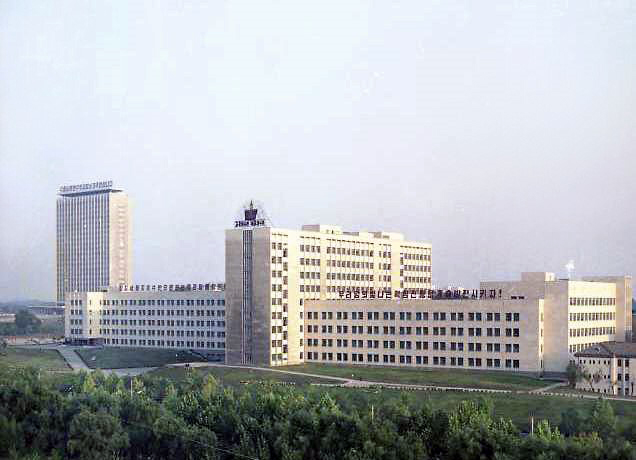 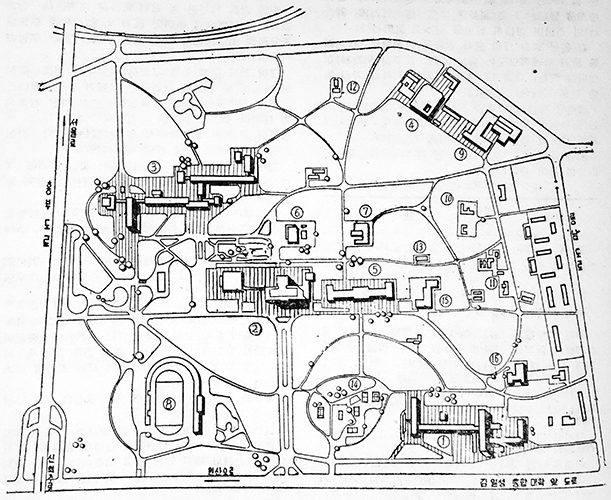 (top) Kim Il-sung University Building No. 1​ / ©The Institute for Peace Affairs
(bottom) Campus plan of the Kim Il-sung University, Architecture and Construction, December issue, 1963, p. 18​
Kim Il-sung University Design Team, which was formed at the Urban Planning Laboratory of the City of Pyongyang, was in charge of designing the Building No. 1 in the early design stages. However, the Kim Il-sung University Design Research Institute, which was independently arranged inside the Cabinet Office of Design, took the charge later. Similar to all other buildings designed since the 1960s, it is difficult to pinpoint exactly who participated in the design, as well as to find the connections with the Bauhaus based on the individual’s whereabouts. Yet, based on other buildings designed at that time, it is feasible to assume that the architects who studied in the Soviet Union or who worked with Soviet or Eastern-European bloc architects in the 1950s, were involved in designing the Kim Il-sung University Building No.1, but that is just one assumption. An obvious fact is that the architects who designed this building did not pursue the white box of the Bauhaus building designed by Walter Gropius. Rather, the repetitive elevation and ‘scientific’ design of the ADGB Trade Union School, which Hannes Meyer completed in 1930, are found in Building No. 1. However, this cannot have been a definite reference point either. In North Korea, the practice of following an architectural style originating in foreign countries is often criticised as ‘bourgeois formalism’ or ‘rootless cosmopolitanism’.
The Kim Il-sung University Building No. 1 is restrained in its use of ornamentation, as much as possible, except for the vertical elements highlighting the nine-story building in the centre and the stairs of the surrounding buildings. As a result, the window pattern that seemingly repeats indefinitely covers the entire elevations of the building. The building is made of standardized and mass-produced blocks and it does not hide them. Rather, the building proudly reveals its humble roots. The fact that the elevations of North Korea’s top university, which was named after their leader, were treated in the most economical manner without ornamentation, firmly represented the direction of the North Korean architecture in the early 1960s. It shared different interests with the neoclassical main building of 1948. Asserted by Hannes Meyer, architecture that satisfies ‘the needs of the people instead of the needs of luxury’ can at least be found on its plans and elevations.
Epilogue: The Architecture of South and North Korea’s Postwar Reconstruction Period and the Bauhaus
Ludwig Mies van der Rohe, the last Bauhaus director, stated that the Bauhaus was able to exert such a great influence over a long period of time, not because of the organization or the propaganda, but because of the ideas it had spread so far.▼6 The greatest legacy of the Bauhaus lies in the ‘idea’ of making a creative art that aims at a new age. As part of this thinking, the Bauhaus combined many various trends in modern art of the 1920s, eventually becoming a brand embracing them all. Although its morphological projections have continuously changed since its establishment, the Bauhaus desire for progressiveness and privileging the artistic spirit to visually represent such desires has influenced architecture and design throughout the world for a century.
Obviously, the two buildings that we examined in this article, the New Building of the College of Agriculture at Seoul National University and the Kim Il-sung University Building No. 1, are very distant from the 1920s Bauhaus in a temporal and geographical sense, and their influencing relationship is not even clear. It would be more appropriate to consider the International Style of the United States and the mass-produced housing constructions of the Soviet Union as strands that have directly influenced these two buildings. Nevertheless, when these two influences are traced backward, we encounter the ideas possessed by the Bauhaus, ideas including a universal architecture with no national or regional characteristics, an architecture that reflects efficient and standardized production, the pursuit of dynamic and asymmetrical composition instead of a previous authoritative and symmetrical composition - all of which are important legacies left by the Bauhaus. These legacies went beyond Weimar Germany in the 1920s to become a vital precedent in South and North Korea, which longed for a new era after the Korean War.
1. William H. Jordy, “The Aftermath of the Bauhaus in America: Gropius, Mies, and Breuer,” in William H. Jordy, ed., “Symbolic Essence” and Other Writings on Modern Architecture and American Culture (New Haven: Yale University Press, 2005), p. 202.
2. Justus H. Ulbricht, “The Bauhaus and the Weimar Republic – Struggles for Political and Cultural Hegemony,” in Jeannine Fiedler & Peter Feierabend, eds., BAUHAUS (Cologne: Könemann, 2000), p. 30.
3. Greg Castillo, “The Bauhaus in Cold War Germany,” in Kathleen James-Chakraborty, ed., Bauhaus Culture: from Weimar to the Cold War (Minneapolis, MN: University of Minnesota Press, 2006), p. 181.
4. Dongmin Park, “The Minnesota Project: Rebuilding Seoul National University’s Architectural Engineering Department and the Formation of U.S.-Oriented Architectural Academia, 1954-1962,” Journal of the Architectural Institute of Korea Planning & Design, 34: 9 (2018), p. 120.
5. Kim Il-sung University Design Research Institute, Cabinet Office of Design, ‘Architectural Planning of the Kim Il-sung University Building No. 1’, Architecture and Construction, No. 1 (1966), pp. 17-19.
6. Paul Heyer, Architects on Architecture: New Directions in America (New York: Walker, 1978), p. 202.​
Park Dongmin
Park Dongmin received his DPhil in Architecture from UC Berkeley on the subject of ‘U.S. Hegemony and the Origins of Modern Architecture in South Korea, 1953 – 1960’. His main research interest is the reconstruction of South and North Korea in the 1950s and 1960s, along with the activities of the architects who were involved. More specifically, he is interested in the ways that architectural style, construction technologies, and urban planning were used as a means of power in the context of the Cold War.
No.620 July 2019 architecture Bauhaus Bauhaus 100 The New Building and Auditorium of the College of Agriculture Seoul National University Kim Hi Choon Ralph Rapson Kim Il-sung University Building No. 1 Postwar Reconstruction
LIST
bookmark_border
favorite_border
12