To Embrace the Future of Manufacturing

The Traces of Sewoon Sangga
Hwang Jie-Eun (Professor, Department of Architecture, University of Seoul), the convenor of the forum, called Sewoon Sangga an 'ironically suspended' space, even though it was once the archetypal modern city. It has suffered the pressures of development, and throughout this the old industrial area in Seoul’s downtown district ? preserved since the 1960s ? has remained intact. The urban manufacturing network has been kept alive in the Cheonggyecheon and Euljiro including Sewoon Sangga buildings through a series of processes, which has long been recognised as an asset in modern urban architecture.
Sewoon Sangga, built in 1968, is the first residential mixed-use complex in Korea. The concepts governing modernist architecture that were internationally popular at the time, such as pedestrian decks, the separation of pedestrians from cars, artificial ground, and raised squares, were introduced to the building. Thanks to these features, upon completion it became popular as a state-of-the-art high-rise residential complex. However, in the 1970s, along with the development of Gangnam, the residents of apartments located in the upper floors left the shopping mall. In the 1980s, as the migration to Yongsan electronics began, the electrical and electronics industries, which occupied the lower floors, also faced a crisis. As time went by, the large mall across the city was perceived as an eyesore. The redevelopment plans for the Sewoon Sangga followed, with projects such as the Redevelopment Plan of Sewoon Plaza District in 1984, Sewoon Sangga and the District 2 and 3 Sewoon redevelopment project in 1988. In spite of this complex situation, the small-scale manufacturing area near Sewoon Sangga remained undisturbed. As a result, this area became the centre of urban industry in downtown Seoul.
Motivated by the Cheonggyecheon Restoration Project, Seoul Metropolitan government furthered its plans to demolish Sewoon Sangga and to recover the disconnected green axis that extends from Jongmyo to Namsan. Preparing the Determination of Sewoon Redevelopment Promotion District project in 2006, the local government began to demolish Hyundai Sangga in 2009, the first building in the shopping district. In the same year, a master plan for the redevelopment of the entire eight blocks around the Sewoon Sangga from Jongno to Toeggyegro was established with the announcement of Sewoon Redevelopment Promotion District Planning.
Announcing the decision to proceed with the change to the redevelopment promotion plan in 2014 marked a turning point for the Sewoon Sangga area, that is, one that would take the approach of urban regeneration instead of redevelopment. In 2015, the Seoul Metropolitan Government launched the 'Remake Sewoon Sangga Project' by holding an international design competition for the public space, to invite designs that would revitalize Sewoon Sangga. The project aimed to open up Sewoon Sangga to citizens and to recognise the area as a 'Maker City Sewoon', and to overcome the negative perceptions cast over urban manufacturing and Sewoon Sangga that dogged the area since the 1970s.
Undergoing this era of compressed growth, manufacturing in the mass production system was pushed out of the city boundaries and the city became a centre for consumption. Today, in the era of slower growth, cities are being reorganised into sustainable and self-sufficient units that can maintain a balance between production and consumption. The information technology advancements and techno-culture that has evolved throughout this process is stimulating conventional manufacturing practices. Today, manufacturing is not something that should be expelled from a city, but has the potential to create a new industrial structure and provide vitality to a city while leading the creative knowledge industry. This forum, casting these issues asbackground, raised questions about how the change of technology has transformed manufacturing and how the city as production space should be better organised. 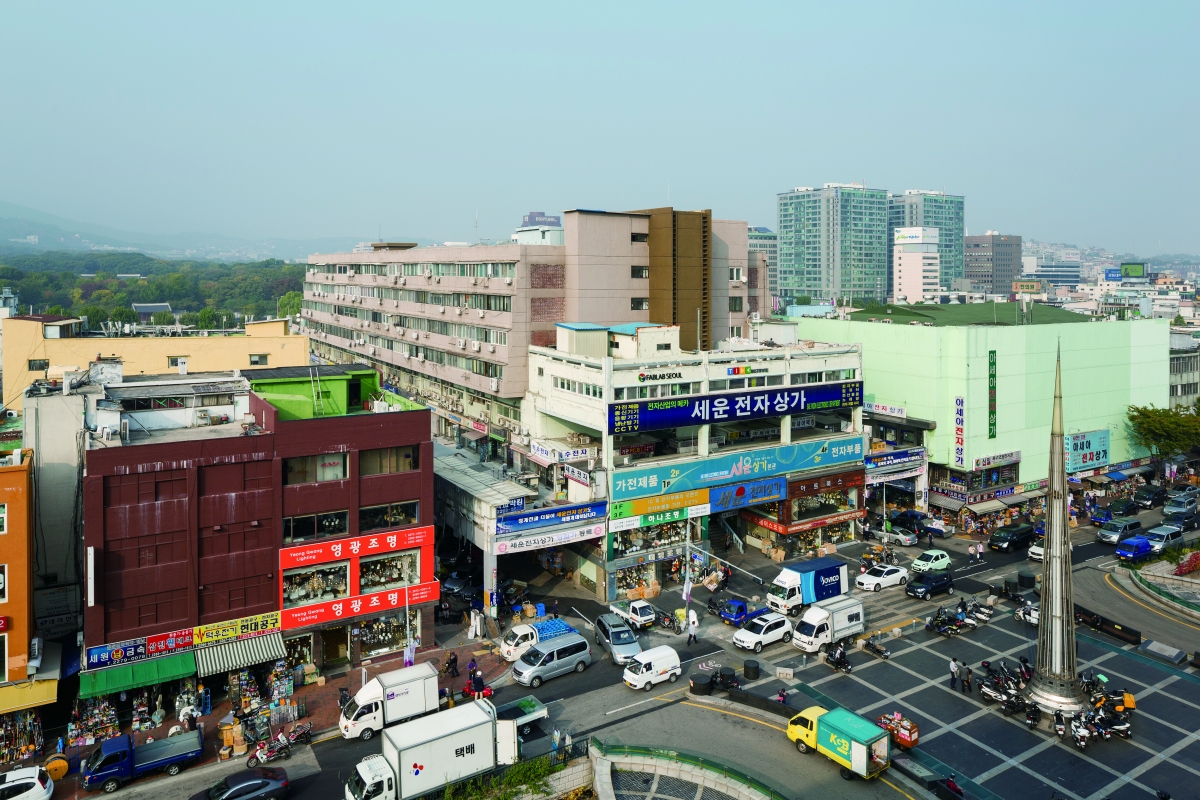 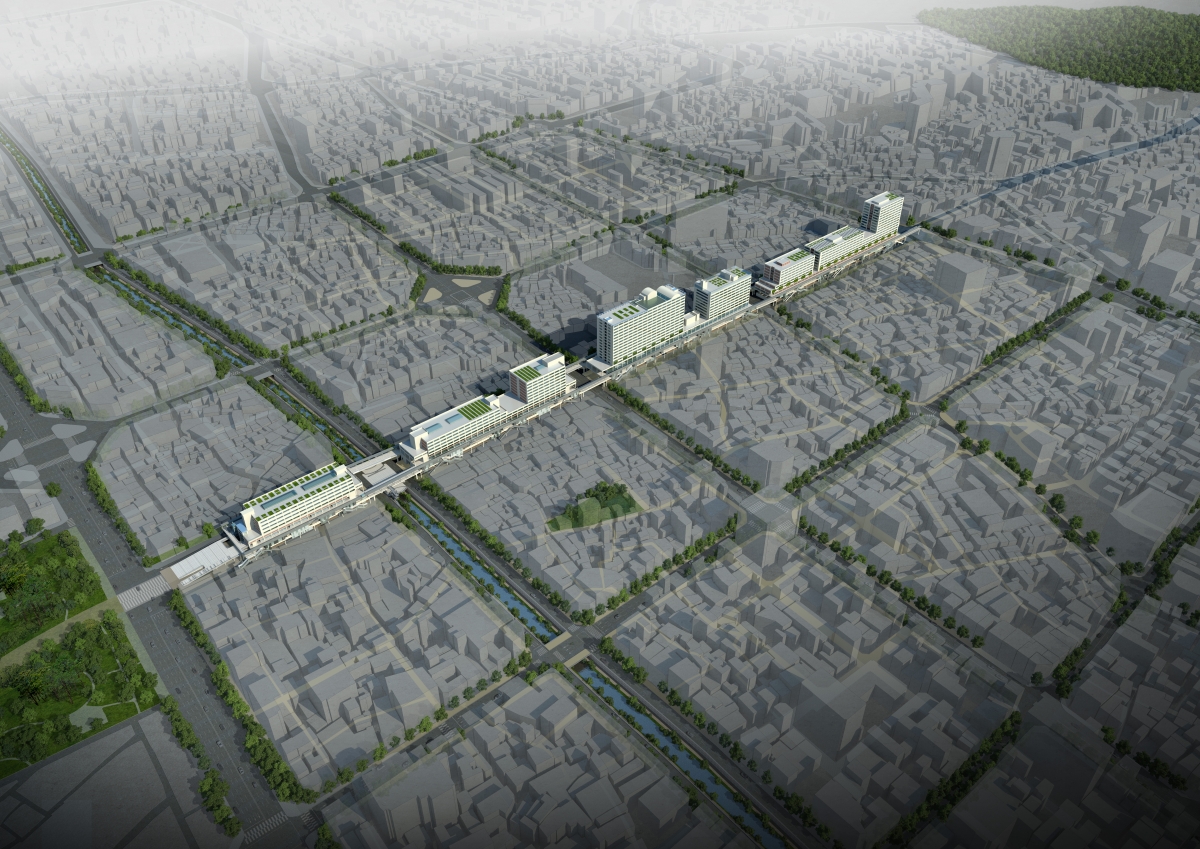 The first phase of the Remake Sewoon Project between Sewoon Sangga and Daelim Sangga has been completed and the second phase from Sampung Sangga to Jinyang Sangga and Namsan Sunhwanro is currently undergoing completion. / Image courtesy of SMG​
Seoul's Future as a Manufacturing City
While the first session was concerned with the source of value in manufacturing and how to distribute that value democratically, the second session discussed the future of manufacturing and the possibility for a central platform. The second session 'Innovation in Urban Manufacturing: Towards Smart Factory City' introduced cases found in other cities to consider how the problems hanging over Cheonggyecheon-Euljiro, represented by Sewoon Sangga, find correspondence with others across the globe.
The cases discussed in Brussels, London and Rotterdam, introduced by Arian Vickery Hill (Cities of Making project coordinator, Latitude Platform for Urban Research and Design) and that of New York by Adam Friedman (Director, Pratt Center for Community Development) demonstrated the common crises encountered by urban manufacturing. In most cities, manufacturing plays a role in creating substances that build and manifest the city itself. Manufacturing was once at the heart of networks or activities in a city, but with economic growth, the priority of land use has shifted to offices, commercial spaces, and housing, with high returns in the short term. This was influenced by growing population, housing shortages, weak land policies, and the invisibility of the manufacturing sector. Adrian introduced 'Cities of Making: a 21st Century Vision for Urban Manufacturing' in European cities. In the cases observed of three highly-industrialised cities in Europe, he argued that the crisis experienced by urban manufacturing has changed over the past decade was due to interest in the circular economy, an increased awareness of the negative impacts of social inequalities, and technological developments. Today, the role of urban manufacturing in the 21st century economy is being reevaluated. In the cases of European cities and New York, urban manufacturing was thought to contribute to a city by improving productivity in the city' and creating jobs, which is closely related to social issues.
The possibility of innovation is commonly suggested as a way for urban manufacturing to stay alive by making use of existing advantages. In particular, through this discussion, we were able to see the future of the manufacturing through Platform Industrie 4.0, introduced by Christian Krug (Consultant, Digitisation and Mobility, VDI Technologiezentrum GmbH). Platform Industrie 4.0 is a policy currently being promoted by the German government for manufacturing innovation. It is the basis and policy platform for the Fourth Industrial Revolution in Germany and pursues a closer network and new business model through the digitisation of industries, seen in examples such as the Smart Factory. In this session, one was able to witness the changes to the industrial structure and policy alternative alternatives, and to weigh up the focus of the urban manufacturing industry. Various methods to enhance the competitiveness of urban manufacturing were introduced. Here, the need for a platform was raised. In the discussion, they agreed on the need for knowledge exchange and creating a network information between government, private sectors, large and small companies in Korea which are based on this platform. As the case studies show, Germany and other European countries underwent a process of trial and error to reach their present conclusion.
The requirements for the revitalisation of urban manufacturing commonly presented in the session included solidarity in the maintenance of the community and the cooperation of various stakeholders. Adam Friedman argued that political and economic strategies are important for the survival of urban manufacturing by introducing specific cases of protecting the Garment Center from redevelopment. Speakers shared their experience of coordinating with administrative agencies and agreed that coordination would be difficult and a time consuming process in any city. Last January, Seoul Metropolitan Government announced that the Sewoon Redevelopment Promotion District would be thoroughly reviewed. The decision was made because of the strong opposition of the small businesses in Cheonggyecheon-Euljiro against high density development for urban maintenance and expansion of housing supply and the critical public opinion against demolition of the Sewoon District 3. However, the demolition is still ongoing, and the local government and citizens of Seoul who are opposed to redevelopment are engaged in a confrontation. The forum highlighted the context and diverse perspectives surrounding Cheonggyecheon-Euljiro's urban manufacturing. This provided an opportunity to think about the future of the industrial ecosystem of Cheonggyecheon-Euljiro and Seoul as a production space to embrace it. 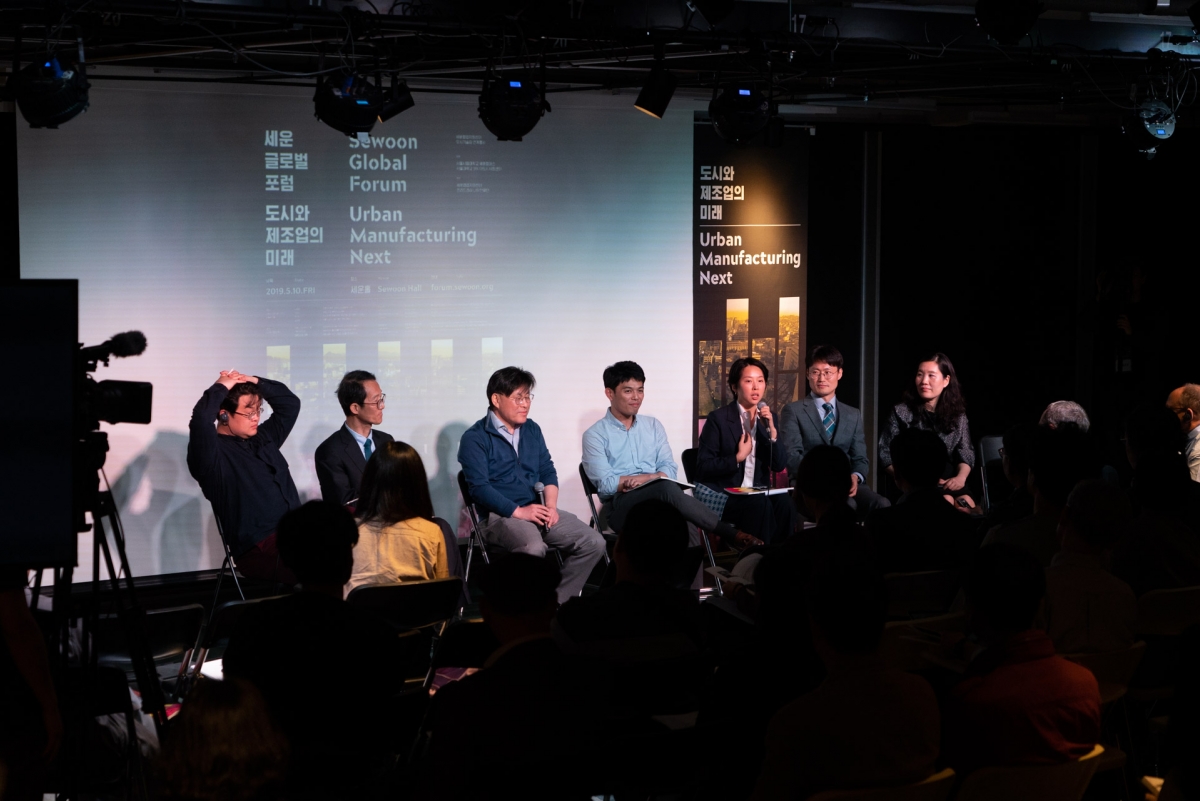 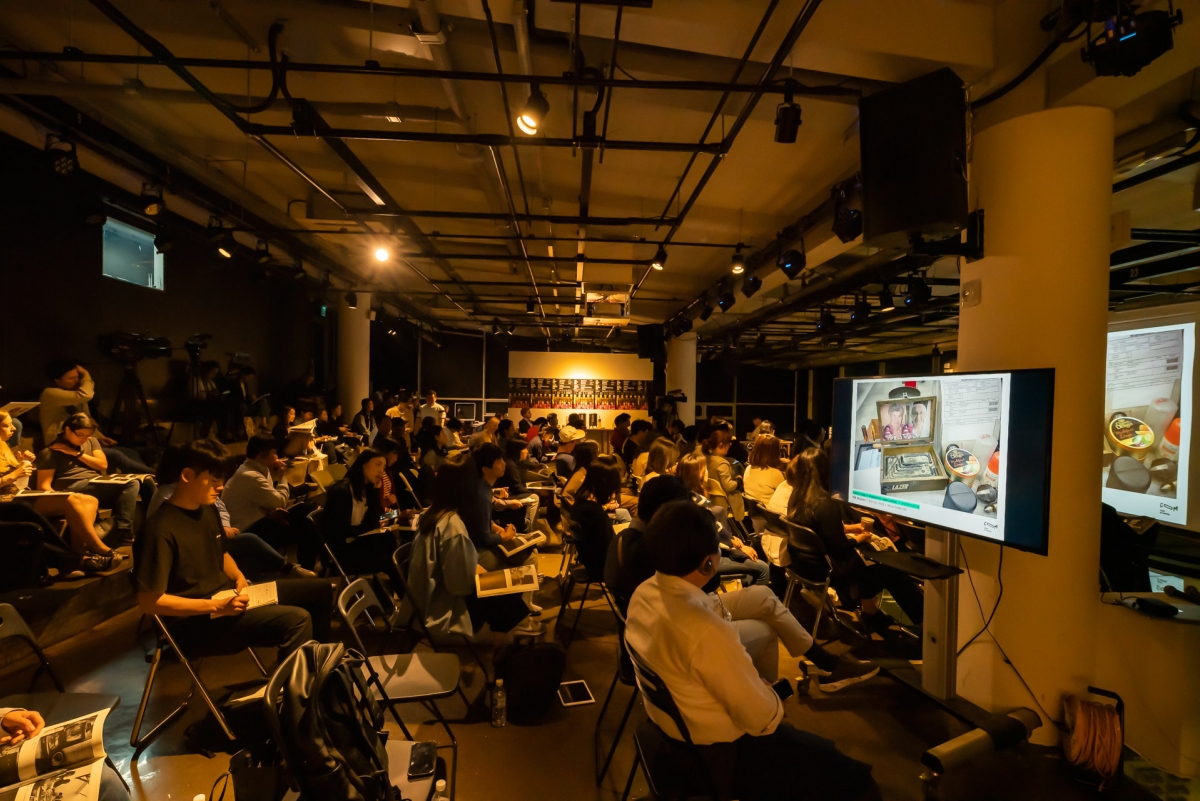 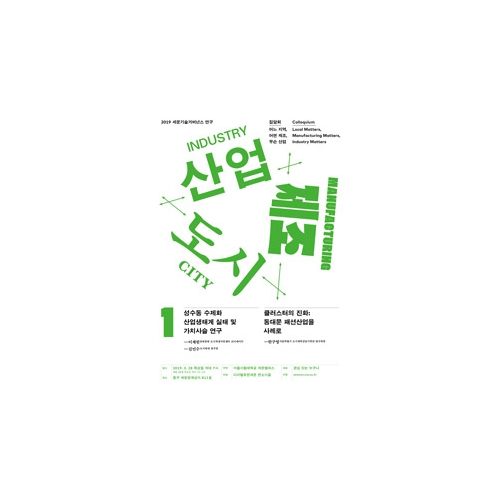 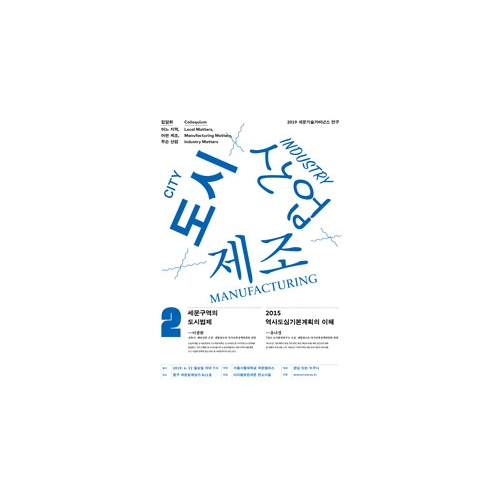