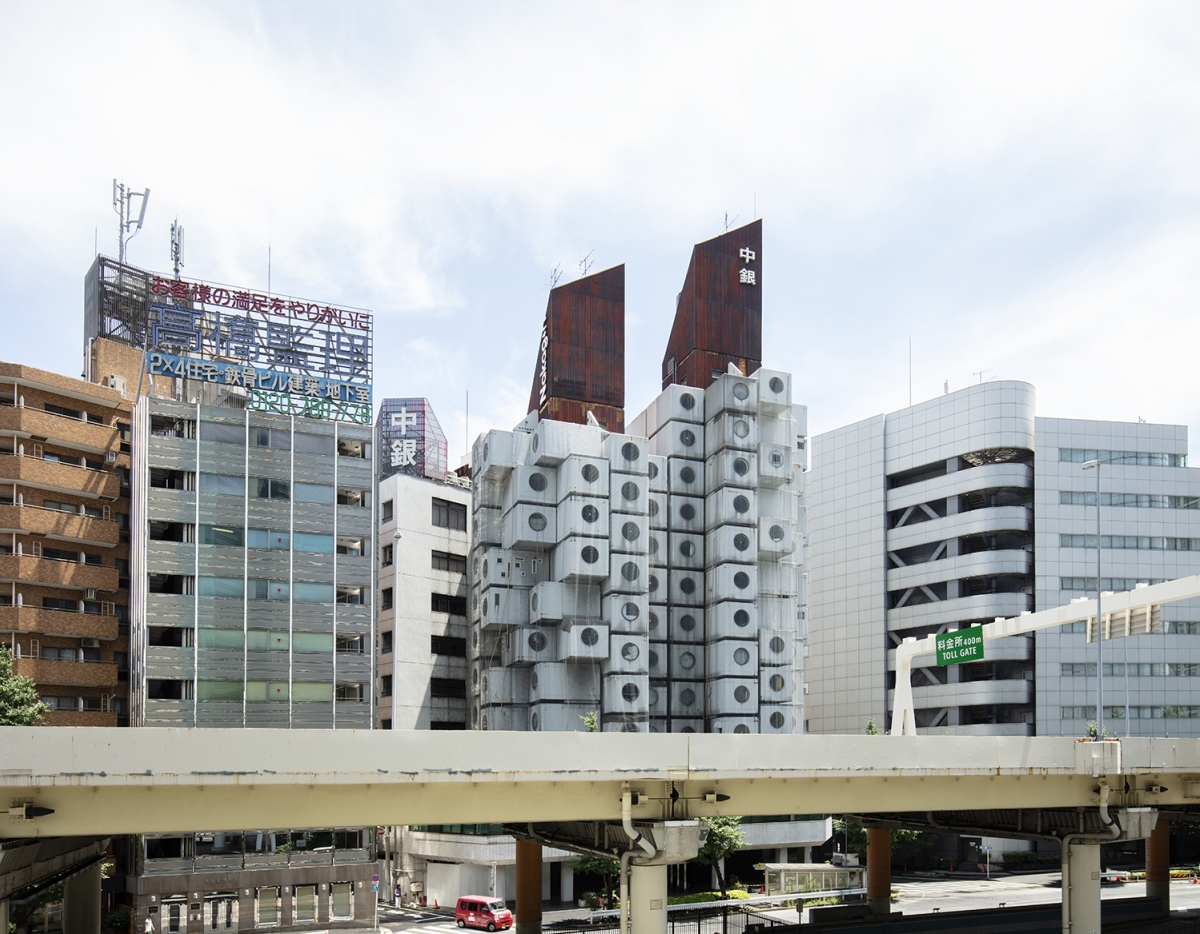 1996. Listed as an architectural heritage site by Docomomo International

2006. Breaking out discussion on demolition

2007. Kurokawa Kisho proposed a way of unplugging the existing capsules and replacing them with new capsules to the owner, Nakagin Group

2007. Decision made to redevelop the capsules as studio apartments

2008. The construction company in charge of redevelopment failed in the 2008 global financial crisis and the redevelopment planning began again from scratch

2018. Plot site of Nakagin Capsule Tower was sold by the Nakagin Group to a limited liability company the CTB GK

When I visited several weeks ago, it was pouring rain. Corridors smelled of mildew. Some tenants had taped plastic bags to their door frames to catch leaks, and many of them were bulging with gray water. At one point a tenant took me up to a bridge that connected the two towers, where I could see chunks of concrete breaking off from the corner of one of the capsules. Nothing short of a full-scale restoration would save it. But when an aging Kurokawa pleaded with the apartment owners to save his masterpiece, he got nowhere. And after his death two years ago, few preservationists rallied to the building’s defense. There’s been no serious effort to look into what exactly it would cost to retrofit the 140 units. Nor has any institution, public or private, stepped up with a viable plan for how to save it. Why is that so? Partly it is because all over the world, postwar architecture is still treated with a measure of suspicion by the cultural mainstream, which often associates it with brutal city housing developments or clinical office blocks. Partly, too, it has to do with the nature of housing blocks in general. They are not sexy investments; they do not feed an investor’s vanity or offer the cultural prestige that owning a landmark house does. But another concern is that all too often, private developments like the Capsule Tower, no matter how historically important, are regarded in terms of property rights. They are about business first, not culture. Governments don’t like to interfere; the voices of preservationists are shrugged off. “Want to save it?” the prevailing sentiment goes. “Pay for it.” Until that mentality changes, landmarks like Kurokawa’s will continue to be threatened by the wrecking ball, and the cultural loss will be tremendous. This is not only an architectural tragedy, it is also a distortion of history.​

▶▶ Stills from the Nakagin Capsule Tower: Japanese Metabolist Landmark on the Edge of Destruction​​ 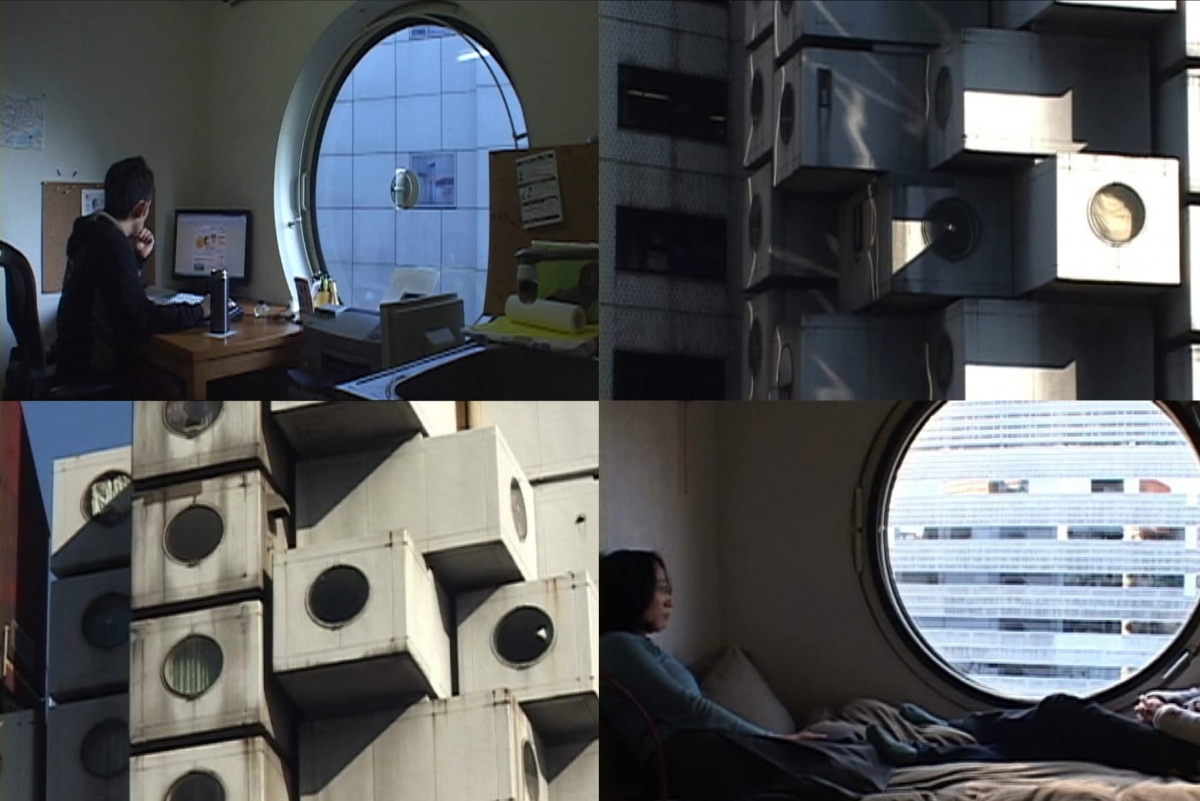 Maeda Tatsuyuki (Maeda): The project was formed in 2014 by residents who admire the Tower. The project members loosely consist of capsule owners, tenants, and admirers of the Nakagin capsule tower.

Choi: What is the ultimate goal of NCTBPRP?

Maeda: Although the management association has been discussing reconstruction, this building was initially planned under the aegis of ʻMetabolism’, in which capsules are replaced regularly and used continuously. So, the project began to exchange the capsules for continuing to use the building. The capsules have not been replaced so far, but it can be dismantled. So, the separate capsule was reproduced in cooperation with Kisho Kurokawa Architect & Associates according to the specifications established 50-years ago. They have been donated to art museums or operated through capsules that can be accommodated.

Choi: You are carrying out three major project so as to pass the Nakagin Capsule Tower on to future generations.

Maeda: Regarding the ʻpromotion of appropriate repairs for capsule owners and management associations for the survival of the building’, the building supervision has not just been delegated to the management company. One of the capsule owners, who is also a member of the project, has become an executive of the management association, negotiating with an architect or general construction company how best to preserve or replace the capsule and explain it to individual owners. Rather than appealing to the outside for preservation, we wanted the people concerned to enter the organisation and shape the conservation. As for ʻproposing new ways of increasing the value of capsules’, in addition to residential and office use, we are also running monthly capsules that can be rented for one month or rented as a shooting studio. The purpose of ʻpublic relations activities to make the building known’ is to publicise the building more widely and to increase the number of admirers of the Tower. We regularly hold tours to deepen understanding of the building. Many of those who experienced the tower during the tour later bought or rented capsules. And people who participated in tours spread the charm of buildings on social media. I think it is because we have actively engaged with media coverage and filming, so we have raised awareness so far.

Choi: Tell us more about ‘the monthly capsuleʼ programme. It is longer than a tour programme and shorter than actually living in a long-term rental. Who is this programme aimed at and what did you anticipate in the running of it?

Maeda: Japanese rental contracts are not easy to finalise because the contracts tend to be complicated, and the initial costs is high. We lowered the initial costs, by including the heating costs in the rent, or equipping them with furnishings and applicances such as beds and refrigerators so that anyone can experience the capsules. It formed a fan base beyond the tours, and, in the end, more than ten times the number of people applied to participate. After this experience, many visitors signed long-term rental contracts.

Choi: What are the present conditions of the Nakagin Capsule Tower?

Maeda: The hot water supply was cut off due to the ageing of the building. There are a lot of rooms in which the ceilings are leaking. As of January 2022, only 10 out of 140 capsules are being used, and even this will soon fall to a single digit. As the managing association decided to sell the site in March 2021, if all goes as planned demolition is expected to begin in the summer of 2022. Demolition decisions are made by the landowner of the building.

Choi: What is the biggest obstacle to carrying out activities related to preservation and regeneration?

Maeda: There are management and structural issues that have caused the capsules of the Nakagin Capsule Tower not be replaced and the building to face demolition. Because the building is under separate ownership, the owners differ between each of the 140 capsules. Capsule replacement or repair is decided by a majority vote of the managing association. Unfortunately, we could not obtain the voting rights needed to replace the capsules at the association meeting held once a year. In order to replace the capsules, more than 80% of those with voting rights must be in favour. Also, since it

is impossible to replace only one capsule, the replacement must be perfromed by separating them one by one from the top layer. The replacement cost of 140 capsules is estimated at 2 to 3 billion JPY. These high costs were also one of the reasons behind the inability to replace the capsules. It feels like the Nakagin Capsule Tower is the only building in the world that requires capsule replacement, but I think that this should not exist separately from the ownership. Instead, a company should own and manage the building and move tenants out to replace the capsules when they reach a specific age.​ 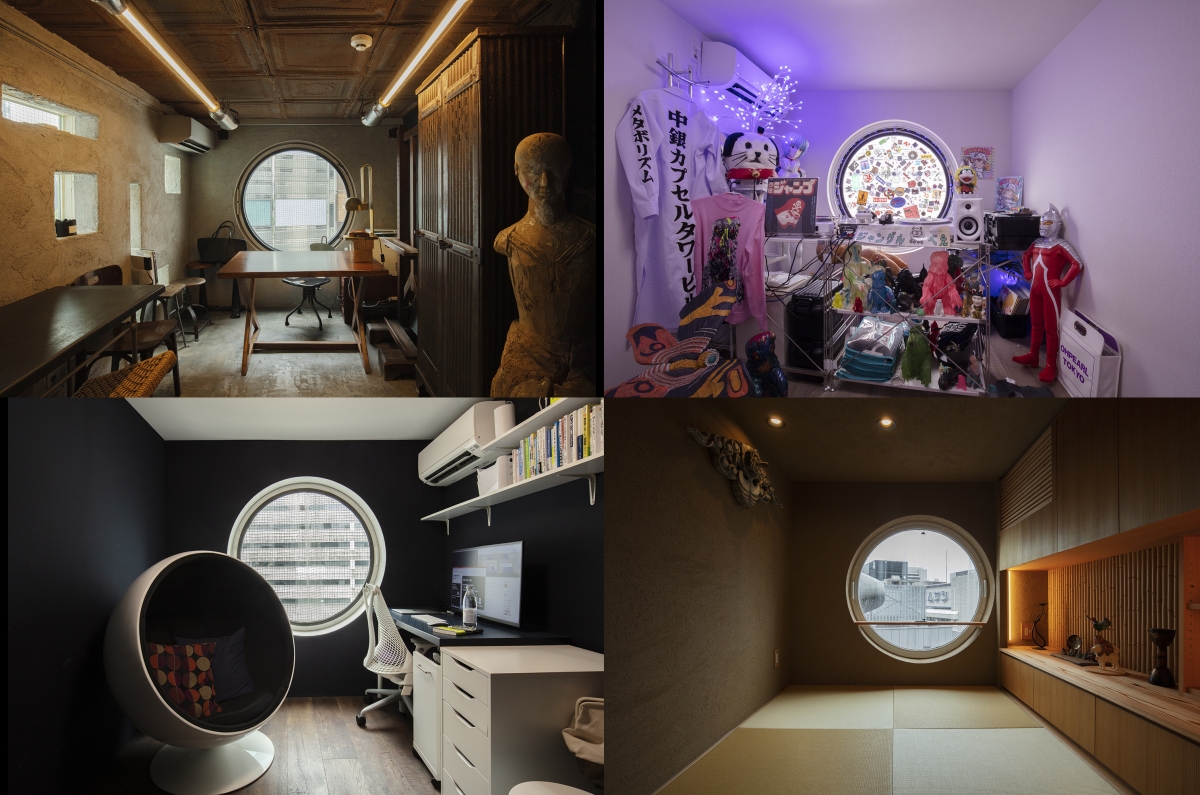 ▶▶▶▶ Statement of objection to demolition by Docomomo International

Docomomo International wishes to draw your attention to the alarming future of the Nakagin Capsule Tower, in Shimbashi, Tokyo, Japan, a symbol of cultural revival and optimism for post-war Japan. Built in 1972, the tower was designed by Japanese architect Kurokawa Kisho and it was conceived to serve as a mixed-use residential and office building, with the intention to host traveling executives. The Nakagin Capsule Tower was the world’s first precedent of capsule architecture built for permanent and practical use. The tower is made of detachable modular-steel capsules, which are connected to two concrete cores that contain stairs and elevators. The height-alternated stair landing, to which the 140 original capsules were aligned with, provided the building with the embodiment of the dynamism the entire project represented. The initial design contemplated the replacement of the capsules once they became obsolete, but, unfortunately, this strategy has never been carried out. During the summer of 2018, the plot site of Nakagin Capsule Tower was sold by the Nakagin Group, the developer of the building, to a limited liability company, the CTB GK. The apartment owners’ association of the Capsule Tower was then informed by the new owner of their intent to redevelop the site which comprehends the possible demolition of the building. Docomomo International believes that the Nakagin Capsule Tower possesses great historical and cultural value, as it is a unique example of Japanese Metabolism, showcasing how its architecture responded to the surrounding circumstances and how flexibility could be the answer to a growing hyper dense and dynamic society. Docomomo International urges the community, the regulatory authorities and anyone concerned with the fate of the Nakagin Capsule Tower to take this issue very seriously, to join efforts towards the protection of this unique landmark in the world and to prohibit any prospective work that might compromise the historic integrity of this structure. 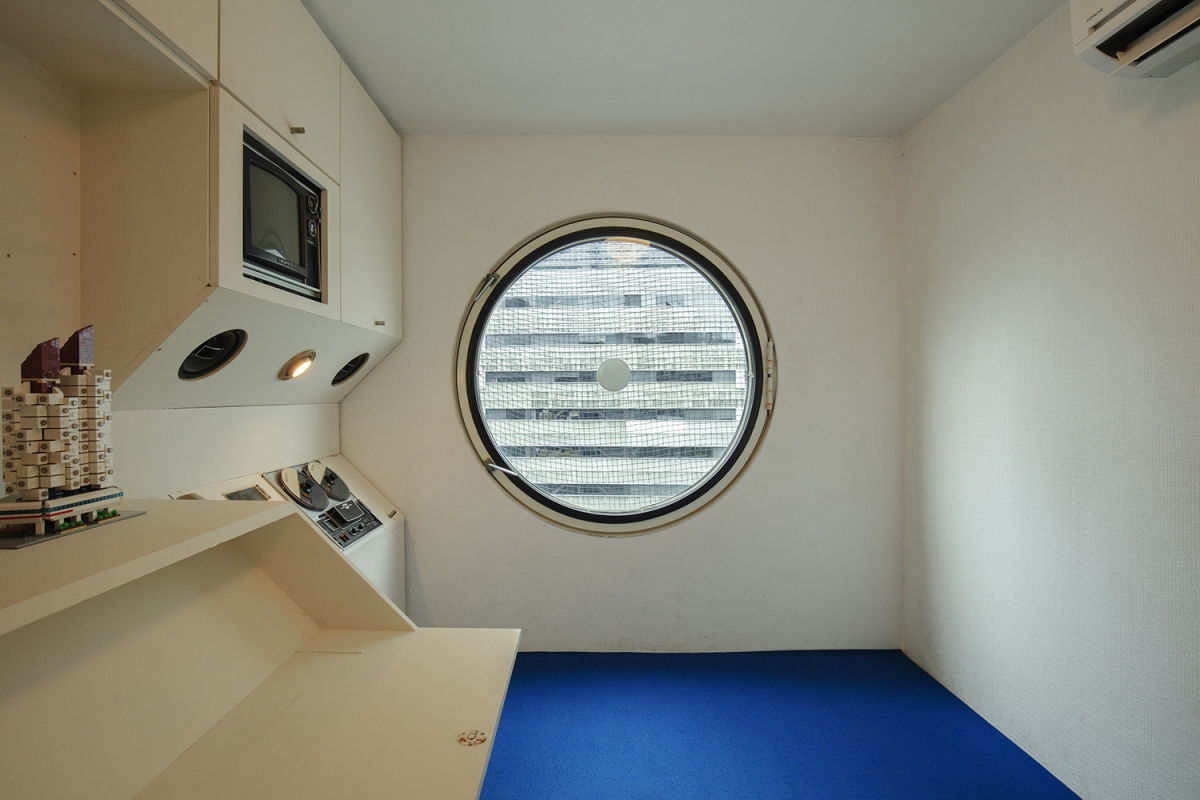