Base Camp Between the City and Nature: Bugok Friday House

​Bugok Friday House in Yangju, Gyeonggi-do, is a vacation home built within a typical suburban housing development. At the end of an alley within this network of buildings, you reach a small house encircled by bamboo walls. This gable-roofed, single-storey home is conspicuous among the surrounding houses, all of which appear to be somewhat intimidated. How has architect Cho Sungik realised his desire to build an archetypal small house for relaxation, one that would exist between an apartment and a summer house? Here we share our conversation as we strolled around this house. 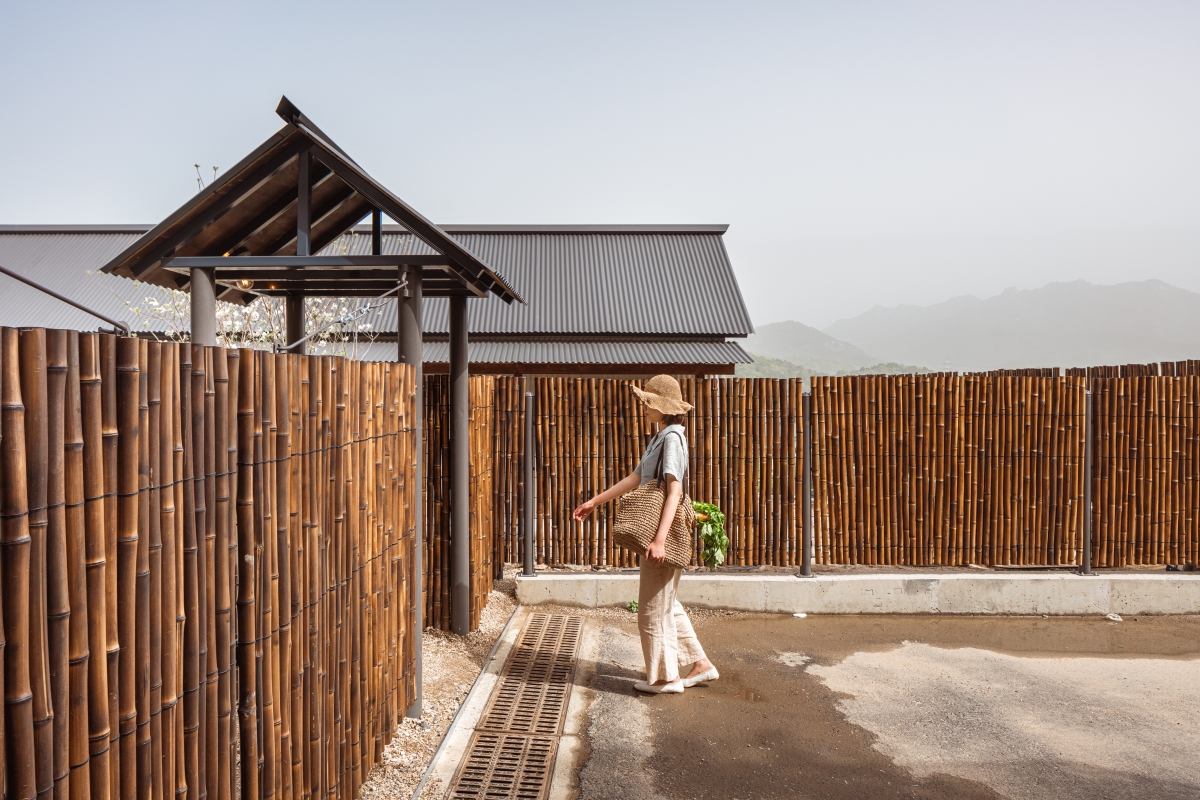 Bang Yukyung (Bang): You have designed a vacation home on the outskirts of Seoul. When you first met the clients, what did you discuss? What were their requirements?

Cho Sungik (Cho): The clients are a married couple who live in an apartment in Seoul. The duo, who like drinking, books, and hiking, desired a vacation home in which they would be able to pursue their hobbies and spend quality time with friends. When we met for the first time, I told the clients that, if they wanted the work taken care of and the management of their home to be enjoyable, they should opt for a small house that requires less work and maintenance. They said they decided to commission me for this project because while everyone around them was telling them to create a large house, I insisted on a small house! (laugh)

Bang: Yes, its size is very small when compared to the houses built within the same housing development.

Cho: When I think of vacation homes, the first image that comes to my mind is of Montauk, a summer retreat intended for New Yorkers. The buildings there are not solely the huge, luxurious villas we see in the movies; most of them are structures of a plain and modest impression, built for everyday comfort and relaxation. As voyages out to sea on yachts is already a special experience out of the ordinary, those who live here outposts on land in which they could rest. That’s why I think of a vacation home as a ‘base camp for relaxation’. Therefore, this leads the design of a lightweight house, one that is as stable as a base camp built for climbing to the summit of a mountain, without necessarily featuring all possible functions or programmes for daily life.

Bang: But isn’t the reason for entering the suburbs to get away from the city and to enjoy nature? When I see this project built in the vicinity of Seoul ‒ quite ironically ‒ rather than in place far removed from an urban context, there is a ambiguity of those who dream of living in the suburbs.

Cho: The word ‘ambiguity’ is accurate in this context. Urban dwellers have a double-edged manner; ‘we like the forest, but we hate insects’. We tend to divide the environments for relaxation into ‘nature of the wild’ and ‘convenient civilisation’. However, should we not try to create different types of housing between the ‘apartment in the city’ and the ‘house in the forest’? In these liminal spaces, our citizens can enjoy a cultivated space of ambiguous relaxation. Rather than simply considering the fundamental desires of people who dream of living in the suburbs as ‘rest’, we may need to classify them separately as a ‘house for a quick stop’, ‘house for solitary repose’, and ‘house for a month’s stay’. I believe that the approach to addressing a range of diverse desires for a holiday house is becoming more refined, especially due to a recent evolution of the understanding and meaning of rest in the wake of the pandemic. 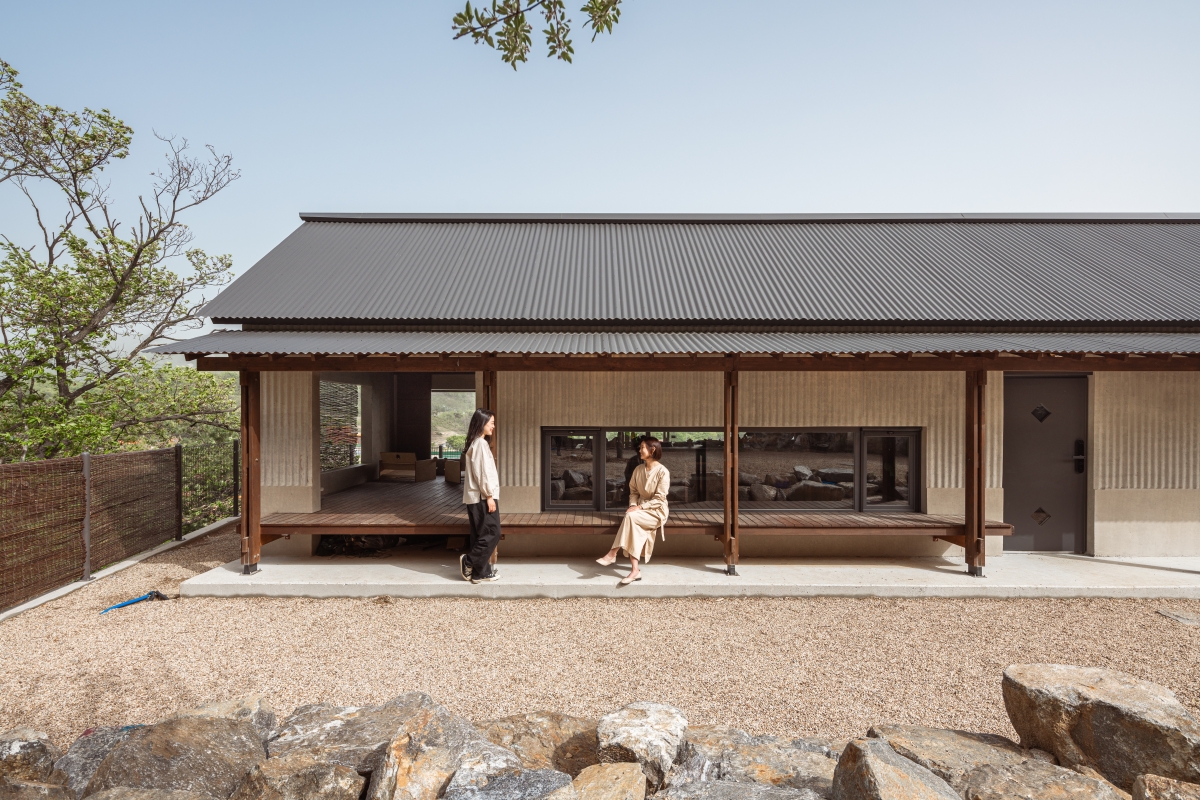 Bang: How does a house dedicated to relaxation differ from that of a typical house? I would like to know how you, as an architect, approached this project differently, when compared to the design of a standard single house.

Cho: Apartments in Korea are refined houses in terms of its functions, in which all functions have been carefully calculated. So, for this project, it was important to create an extra space, one that is often is difficult to find in apartments; a space with no specific aim or use, such as a daecheongmaru (traditional wooden floor). Meanwhile, I also wanted to reveal, through this house, a new prototype for the vacation home. When designing a single house, the ego of the architect or client is inevitably expressed, but I approached this house with the idea of creating a ‘type’ without focusing on satisfying certain private ambitions. The idea was to create a genre of house that has never before been fully realised. First, it should be easy to manage. For this, the size of the house is reduced and simplified to a single-storey house. The landscaping is at a minimum, and the structure is built by mixing steel frames that are easy to extend and rebuild. Materials that are readily available for maintenance and repair should be selected. An example of this is the use of corrugated steel sheets and sandwich panels that are easy to install and disassemble. I believed that such elements could be assembled together to create an archetype of a house for a quick rest. It was also an important task to reflect the behavioural patterns of residents in the design. If you live in a suburban house, you will often go in and out of the house. A water faucet was designed in accordance with the act of ‘washing your hands as soon as you enter the common entrance’. It was the same reason behind the decision to ‘place a shared restroom between the resident’s zone and the guest’s zone’ since there will be many guests visiting.

Bang: When you enter the main gate, there is a wide yard, and the house is set back to one side. What did you consider to be vital when designing the layout?

Cho: This house is located at the end of a cul-de-sac in a housing complex built using stone walls after cutting into the slope. The greatest merit of this site is the panoramic views of Bukhansan Mountain facing the south. In general, if there is a good view of the south, we place the building to the north and create a large yard on the south. This is to enjoy the scenery both at home and in the yard. And yet, in terms of this house, we placed the building at the southern end in order to be able to enjoy the scenery from the inside and to create a backyard surrounded by the house and fences. When people enter the house through

the quaint backyard, we hoped that they would be able to encounter this unexpected scenery.

Bang: The exterior elements, such as bamboo fences, a corrugated steel roof, a exposed concrete wall, wooden columns, and toenmaru (traditional wooden porch), give a sense of a building that is contemporary but also approaching the form of the traditional hanok.

Cho: I thought of it as a modest and simple house. A corrugated steel sheet used for the gable roof is a significant material that determines the overall impression of the house. We used this corrugated steel sheet as formwork to create the same pattern on the surface of the exposed concrete. Roofs were added to the front and the rear of the gable roof, to prevent direct sunlight from entering the room and to reduce the scale to create a cosy sense of space. The proportion of the length and height of the roof was designed to reflect the visual proportions of traditional hanok. The possible sense of a heavy roof sitting on a light pole is probably due to such a design. The wooden columns that support the additional roofs were built by attaching two 2 × 6in (38 × 140mm) studs to match the rhythm of the surface of the corrugated steel sheet. What a pleasure to see these details in a small house with a simple shape! 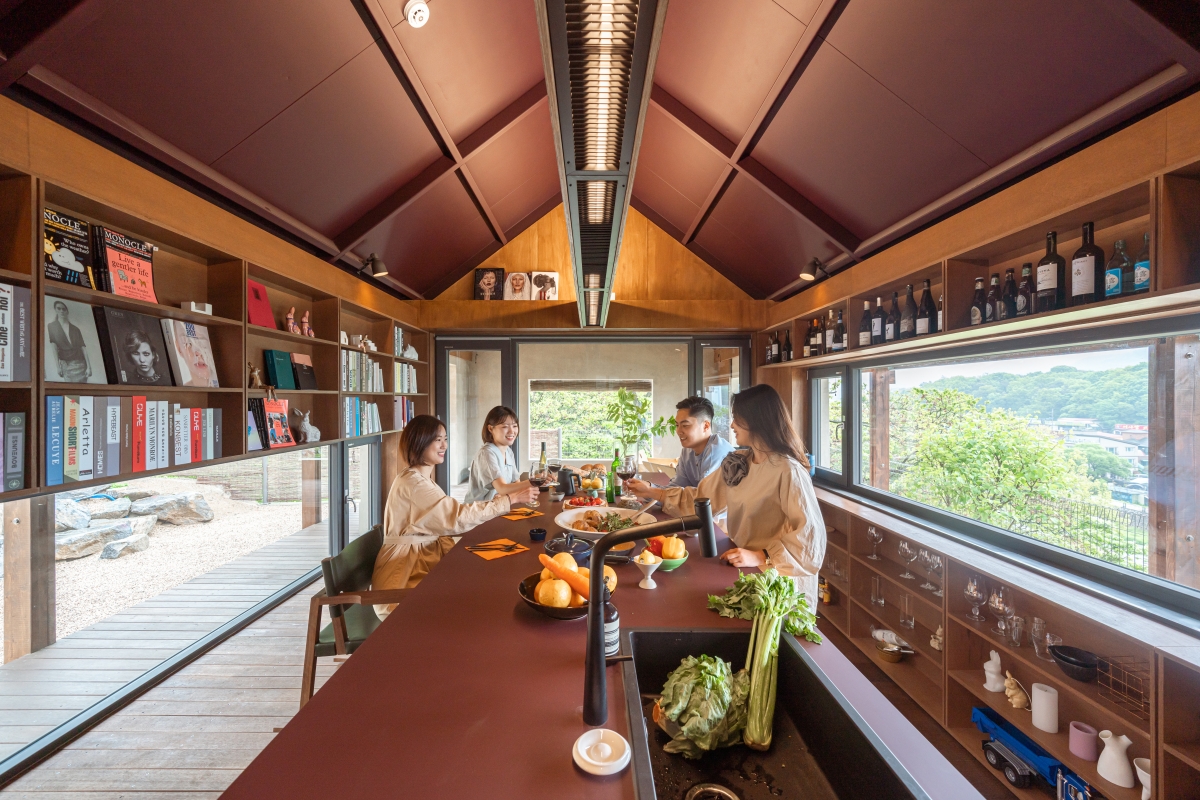 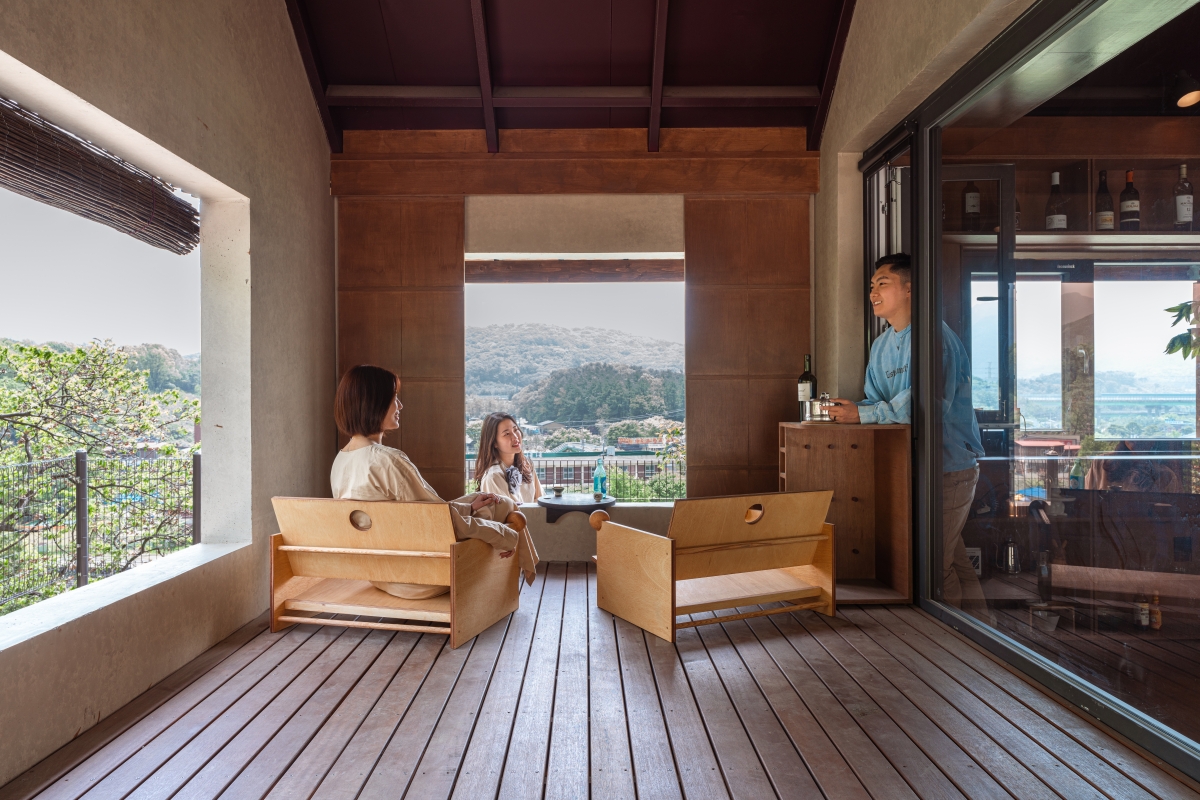 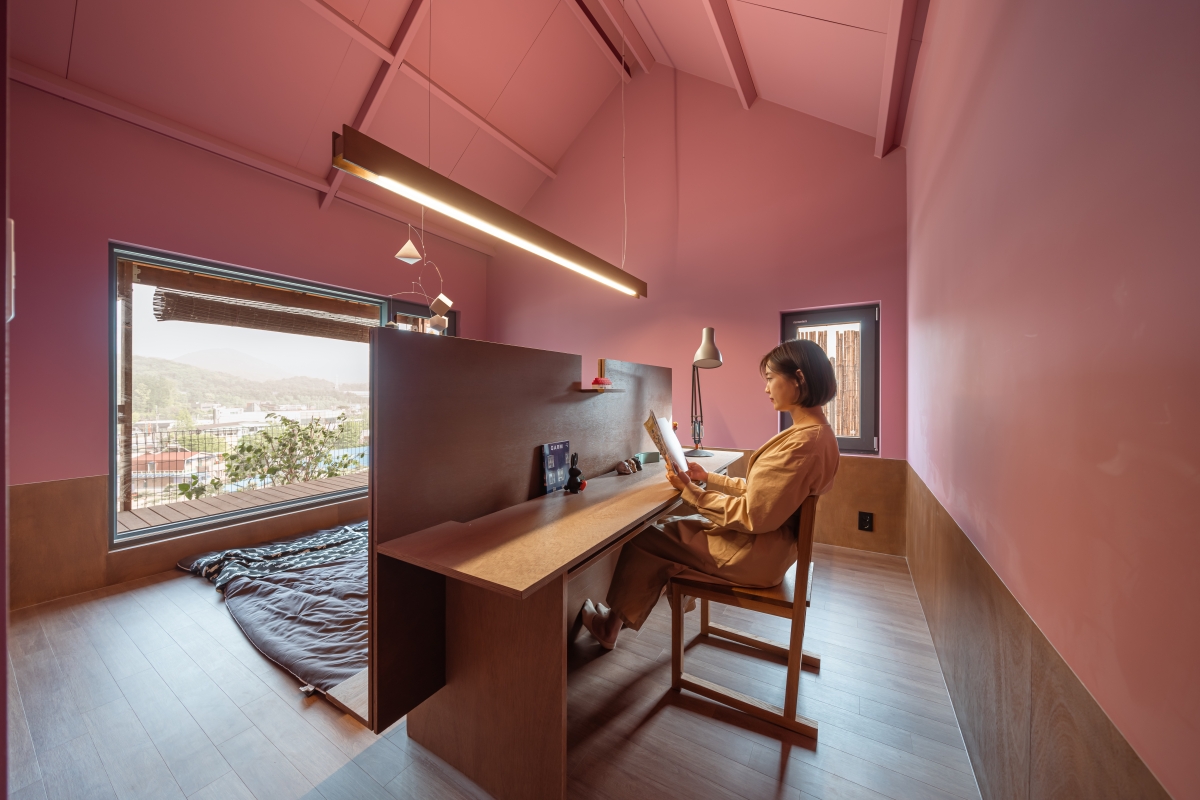 Bang: But then, when you actually look at the inside, it is completely different to that of typical houses. The composition of the floor plan is quite unique, including a relatively large kitchen area and the circulation path that passes the restroom to enter a room.

Cho: The plan was feasible because it it is not a typical house. I designed it by holding in mind how people would use this house. With the entrance as the axis point, the elongated building was divided in half, with a kitchen on one side and service space on the other. The kitchen, which is the central space of the house, is a kind of multi- space. The size of the room was determined so that the clients, who love books and drinks, could easily grab one or the other when sitting in a chair. It is a space entirely directed towards eating, hanging out, and resting, where the height of the floor has been adjusted so that people can have a conversation with the person on the opposite side while cooking. The restroom, bathroom, and bedroom have been designed to occupy minimal space.

Bang: Unlike the understated exterior, various colours have been used on the interior. I heard you also designed the furniture yourself. What is the main concept behind the interior?

Cho: We used the natural colour of the wood, but applied a colour that resembles the ‘colour of nature’ based on the use of each space. The deep purple that resembles the night sky was used on the ceiling of the kitchen, which is a space mainly used in the evening. The indian pink that resembles the morning light is used in the bedroom.  The interior finishes and furniture were designed in collaboration with Oakwood Studio, run by a young carpenter. The smaller the space, the more important the things you touch, grab, and use. This was a very useful collaboration as the members of the office are experts who understand the concept behind the space. If you look at every corner of the house, including the bookshelves, drink cabinet, tables, dining chairs, and a holder for a sign-curtain, you will discover highly detailed designs. Our office designed a lounge chair to suit the daecheongmaru and a bedroom desk; all well designed and realised in virtue of collaboration with the contractor and carpenter who understood our intentions well. This is a small house in which the space, interior, and furniture have to be integrated rather than comply with the concept of filling the space with content. So, it was important for the architect, constructor, and carpenter to work together from the beginning.

Bang: Looking at the current trend in which vacation homes and stay services are in the spotlight, it seems that more people want to experience a new kind of residential space. What are your thoughts on this change?

Cho: It has only been ten years since people started to enjoy staying at home rather than traveling to a tourist site. The living space itself has become an attraction. Such houses are being built in old neighbourhoods of local cities, such as Jeju. The concept of ‘experiencing the house through living in it’ has the favourable outcome of broadening our experience of habitation. If there is to be a next phase in such a phenomenon, is it not to experience a relaxing time in a neighbourhood rather than within a single house? Rather than resorts that focus on convenience, I believe there will be villages ‒ from alleyways to homes and commercial facilities oriented around leisurely villages ‒ designed along the theme of relaxation. It could be referred to as a kind of ‘village of vacation homes’, and I hope I will be presented with an opportunity to design one someday.​​ 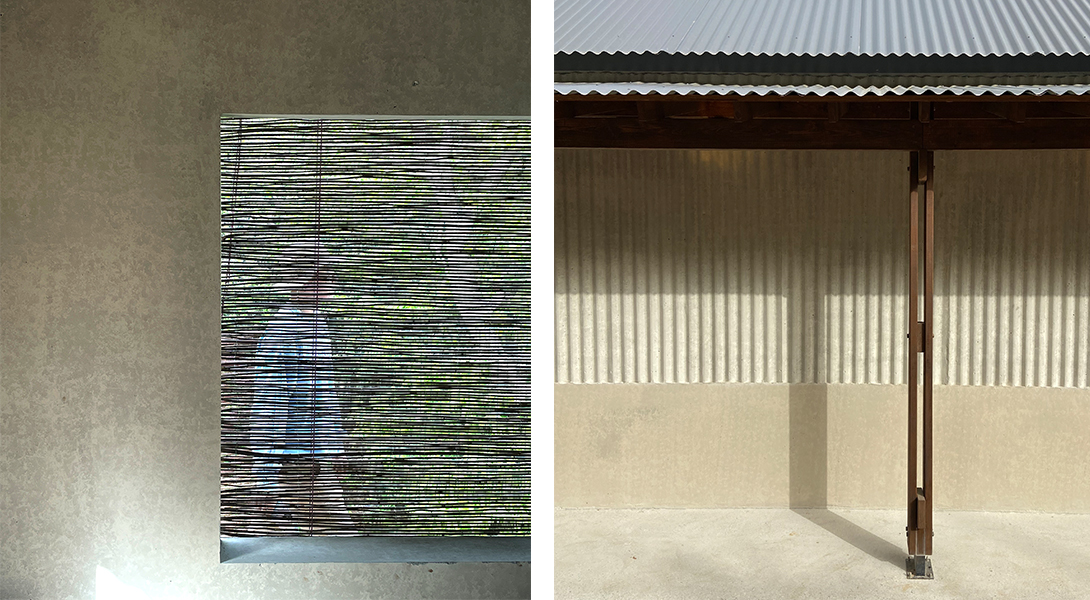 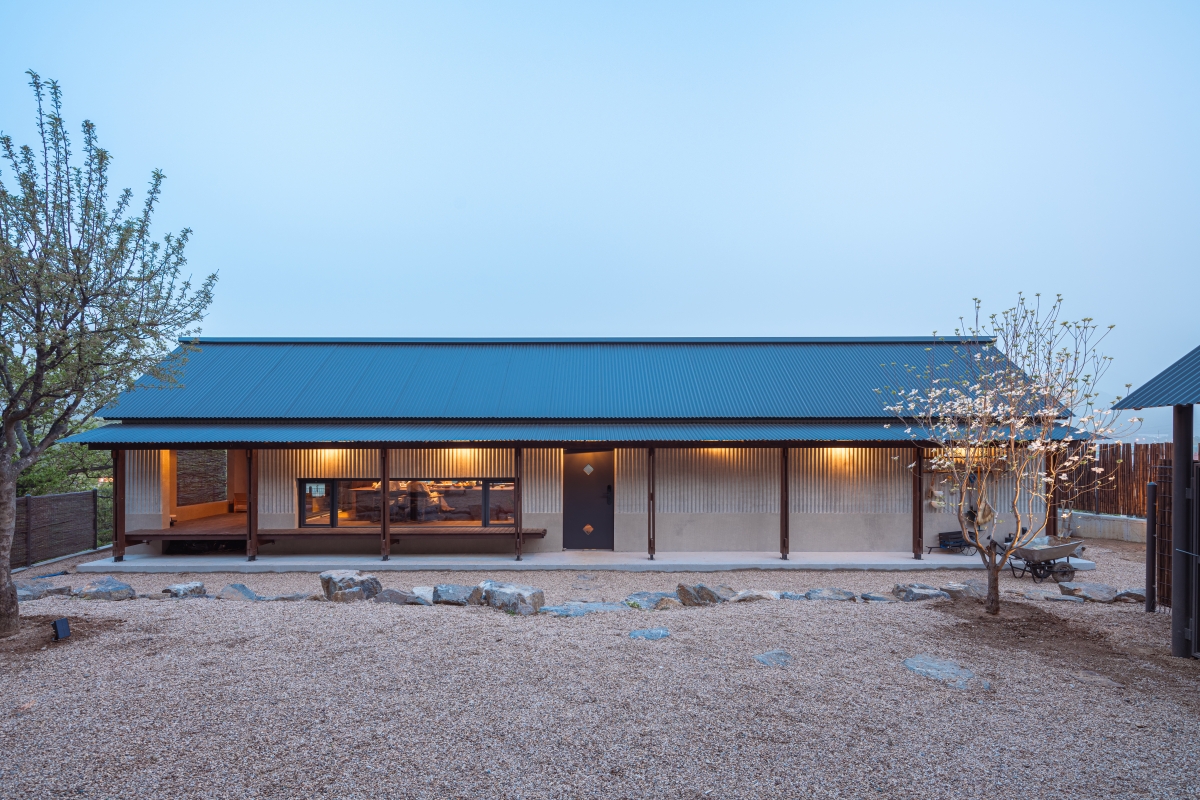