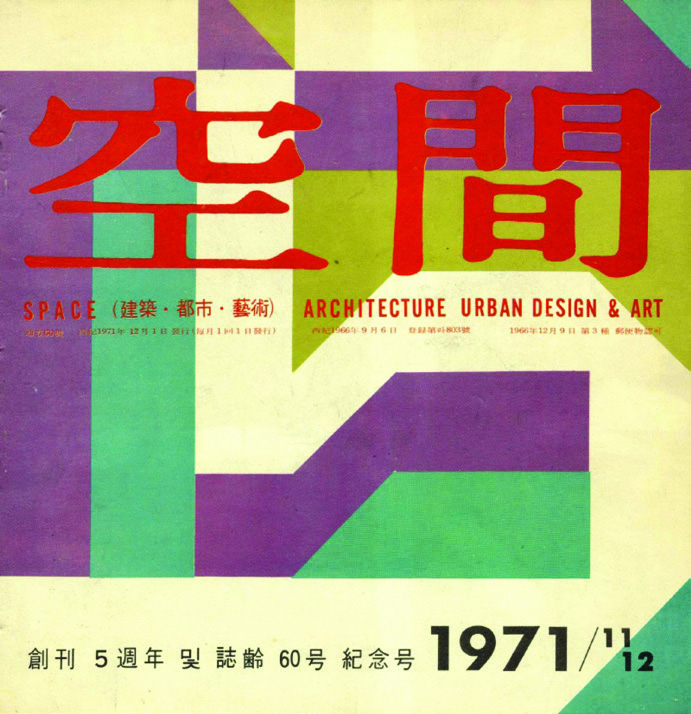 If one is able to figure out what it means when someone says the following, ‘SPACE covered a space by SPACE’ or ‘What kind of spaces do SPACE and SPACE dream of?’, it is very likely that the person has received an architectural education in Korea or is working within the Korean architecture scene. The meaning becomes clear by adding to this an écriture installation and some determinatives: ‘The magazine SPACE covered a space created by the SPACE Group’; ‘What kind of spaces do SPACE and the SPACE Group dream of?’ The real issue is that it is difficult to answer this question, even if it is not perceived as a riddle. By adding ‘Ultimate Space’ or ‘Womb Space’, which are presented as standard answers to the question, to these three spaces, the overlap of the word ‘space’ becomes richer. The means of greatest importance and authority that can be called absolute in the history of Korean architecture in the twentieth￾century are a design office that is skilled enough to conceive of a bold genealogy of practice in the name of not only the founder but also the architects who pass through it, and above all a core concept from the numerous theoretical discourses encircling modern and contemporary architecture. What did the traces, structures and discourses do the overlap of these three ‘spaces’ offer Korea throughout the last century? Unfortunately, we do not know why Kim Swoo Geun (1931 ‒ 1986) and his team chose ‘Space’ as the title for the first issue of SPACE.▼1 Its background can be traced to ‘Major Space’, which was the special feature article in the first issue, and through the fragmentary discussions that follow, but this is an issue that demanding many pages. Moreover, it cannot be considered as defining their essential concept of space, since the space of SPACE Group (hereinafter SPACE) demonstrates a significant difference to the general approach of the times. There is dramatic difference between the space of the Korea Engineering Consultants Corporation era in 1969 and space of SPACE in 1970. This is a change prompted by Kim Swoo Geun but also a difference noted between Yoon Seungjoong (1937 ‒) and Kim Wonsuk (1937 ‒). As Yoon Seungjoong, who was the head of the Team Kim Swoo Geun in the 1960s, testifies, ‘Since the 70s, Kim Wonsuk played my role until then’.▼2 In short, it marks the transition from the sizeable symbolic spaces of big national projects to the human-scale spaces of individual ones. A representative example of the latter is the SPACE Group of Korea Building (hereinafter SPACE building), which many consider to be the most characterful and outstanding architectural work by SPACE. At this point, several questions arise. If the SPACE building is the instance in which the construction of space is best implemented, what lies before and after? Against what background did the SPACE building emerge and what did it give rise to? In other words, is the SPACE building an exception that was not and cannot be repeated? Or did the SPACE construction principle forge a kind of system that can be variable and applied according to a given scale and programme? The answer may be a mix of the two above, given that buildings like the SPACE building are not common. However, identical twins much larger and more complicated in size and use do exist. It is a system that attempted an expanding network like the Miesian space, but failed or did not have a chance. One of these identical twins was observed in the ʻPlateau Beaubourg Art Center (hereinafter Beaubourg Center) Planʼ in 1971. 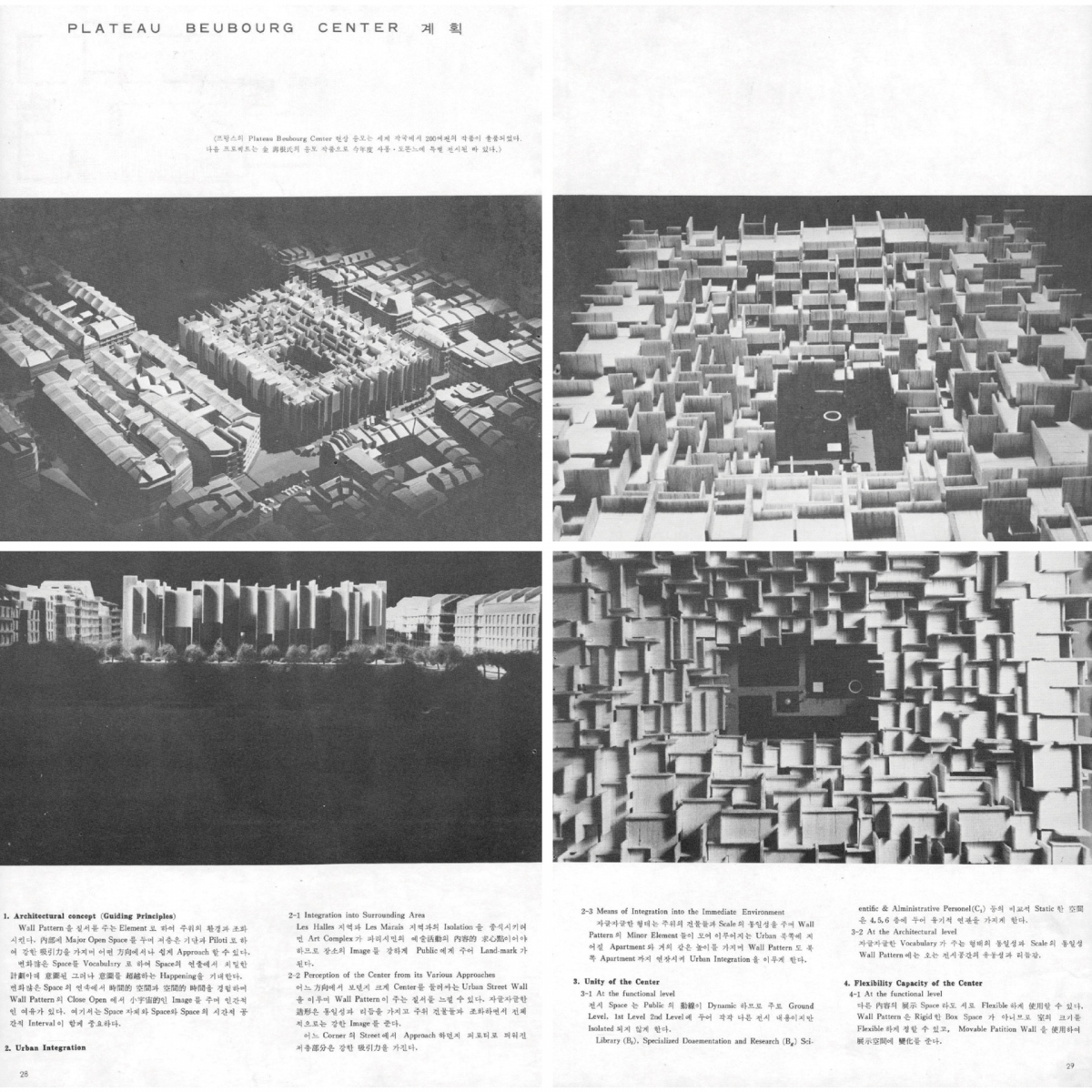 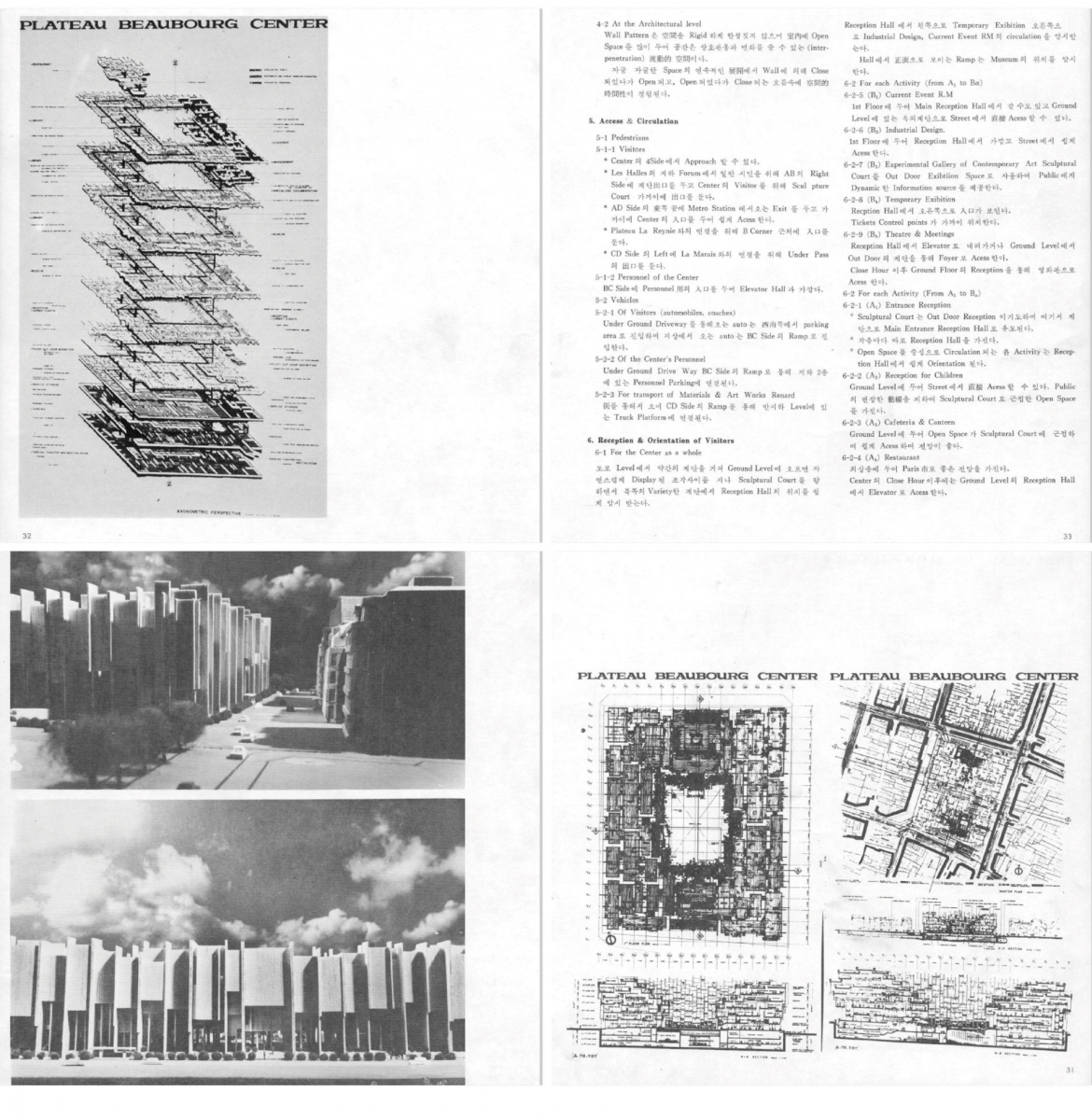 Georges-Jean-Raymond Pompidou, who took office as President of France in 1969, decided to redevelop the Les Halles and the Beaubourg area in Paris and build the cultural complex Beaubourg, on a site which had until then been used as a parking lot. This marked the beginning of the design competition for the Beaubourg Center, later called the Centre Pompidou. In the aftermath of the 1968 revolution, which expressed outright distrust of the established political and social order, the design competition was held in February 1971 as an international competition open to all architects. This site is located near Victor Baltard and Félix-Emmanuel Callet’s Les Halles, a representative product of Georges Eugène-Haussmann’s renovation of Paris that exposes the signatory materials of modern architecture of glass and iron to view. Kim Swoo Geun, who had completed his days at the Human Environment Design Institute (HEDI) and Korea Engineering Consultants Corporation working on the Korean Pavilion of Osaka Expo ’70, participated in this international competition in collaboration with new staff members. The SPACE building and this plan were carried out simultaneously as it was difficult to determine which would be first and which would be later. The Korean architects who participated in this international competition were Kang Sukwon (1938 ‒) and Kim Jong-sung (1935 ‒). On the 15th of July, 1971, the proposal of Renzo Piano, Richard Rogers, Gianfranco Franchini and Ove Arup & Partners was announced as the winning design.▼3 The proposal of Kim Swoo Geun - the books and models were submitted under his name - was first introduced in the pages of SPACE No. 60 (November/December 1971). The magazine included model photos, floor plans, cross-sectional views, and the axonometric without any winning proposal information. Later, it was re-introduced in SPACE No. 62 (March 1972) through a small photograph accompanying Marcel Cornu’s critique of the design competition itself, translated by art critic Lee Oil. This plan also reappears in the special memorial feature in SPACE No. 230 (September/October 1986) after Kim Swoo Geun’s death. Compared to the scale and monumentality of the building and the historic importance of the Beaubourg Center design competition, it is difficult to find a strong critical analysis of this work. Nevertheless, decades later, the Beaubourg Center plan has remained a significant work in the history of the architect. It was included in the 20 works on display in the exhibition ‘Dense Modernities: Kim Swoo Geun, Korea’s Architect for the Twentieth-​Century’, held at Aedes Gallery (Aedes Architekturforum, Berlin) in 2011, and the only original model made in 1971 was exhibited.

The Beaubourg Center Plan spreads out along 157m in the north-south direction and 120m in the east-west on a 7.5m square grid pattern. It fills the entire plaza in front of the current Centre Pompidou and is a square-shaped plane with a 5×7 grid courtyard. The outer part was six stories high, and the courtyard area gently descends from the third floor towards the courtyard. Even if you consult only the drawings and model photos, the Beaubourg Center Plan is a vast labyrinth. The SPACE building can be considered an elaborate and refined version of the Beaubourg Center’s 2×4 grid. Conversely, the Beaubourg Center is a structure intertwined with about 20 SPACE buildings. There were a lot of things to consider carefully, but we will examine just a few here. The first is that the indoor space meets the outside air every 7.5m, forming a structure and area unit. Although the building has a thickness of 30m, it is formed mainly of the interlinking of shallow spaces. According to the 1971’s plan, concerning programmes and circulation, it is impossible to establish the schemes intended for facility systems such as air conditioning. However, we can only assume the attempt was made to solve any issues of ventilation by overlapping the structure with the shallow space facing the outside air. Like the exterior made of overlapping narrow masses, the plane also overlaps with small units. This unit was not repeated or duplicated, however, instead following the same principle of tuning one by one. It is a handcrafted unit that is far from the machinic. Another feature associated with this is the absence of columns. The plan consisted of a building with 120m on the short side as a wall. The structure is the wall, and it is the wall that divides and defines the space. We cannot find the possibility of vertical and horizontal expansion provided by the column-floor combination and the doctrine of modern architecture of ‘space’ floating within. There is a strange ‘space’ constrained by walls from time to time but connected to form a colossal maze. The movement was explained in detail in the initial plan because the architect knew that orientation would pose a problem for this complex ‘space’.

Maybe the space of the SPACE, the space that the SPACE wanted to explain through various articles, was not the one of the Beaubourg Center? This was about creating space through the superposition of shallow spaces. If this is arranged in one direction and the external space is transformed to the scale of a yard rather than a gap, would it become the basic schema of the design competitions for various museums and cultural facilities conducted by SPACE from the late 1970s to 1980s? Could this be viewed as the attempt to explore the potential of a space that can be expanded differently from the Dom-ino Frame? Until recently, in modern Korean architecture - where thick spaces without external spaces are very rare - is it not true to claim that the Beaubourg Center Plan is a latent living form already realised in various ways? I do not wish to be misunderstood; this is not to say that the space in this plan marks the climax in achievements made by contemporary Korean architecture, nor does it solidify the myth of SPACE. It is more like the opposite. It reminds us that it is necessary to look at the starting point at which an idea it is expressed most dramatically to be able to return and ask what shadow the superposition of the shallow spaces cast. And yet we don’t know enough about what impact this tripled space has had. If not to break the fixed interpretation and to add a notion of the new, what reasons would any of us have to revisit past copies of magazine? (written by Park Junghyun / edited by Bang Yukyung) 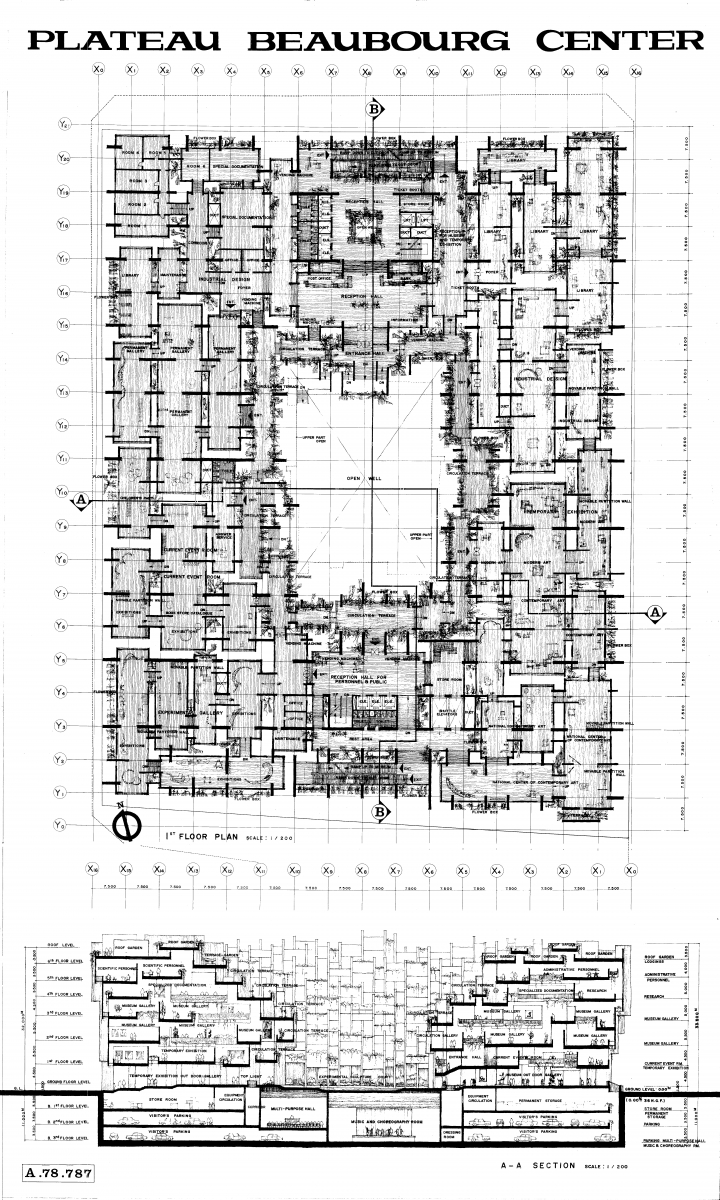 The following article is ‘The Umbrella￾themed House’ by Suh Jaewon, from the SPACE No. 31 (June 1969).

1) For more on the SPACE No. 1, see the Park Junghyun, ‘Korean Central Intelligence Agency, Literature and Architecture,’ Modern Architecture in the Developmental State of Korea, Seoul: Workroom press, 2020.

3) For general information on the construction of the Centre Pompidou and for background to the epoch, see Francesco Dal Co, Centre Pompidou, New Haven: Yale University Press, 2016.

Park Junghyun
Park Junghyun received his doctorate from the department of architecture, University of Seoul. He has produced several publications, such as Modern Architecture in the Developmental State of Korea, and is the co-author of Korean Architecture in the Transitional period and 4.3 Group, Experiment of Architopia, and Design Culture in the Middle Class Age. He translated Portfolio and Diagram and The Classical Language of Architecture into Korean, and has participated in the planning of exhibitions such as The Korean pavilion at the 2018 Venice Biennale ‘Spectres of the State Avant-Garde’ and ‘Papers and Concrete: Modern Architecture in Korea 1987 ‒ 1997’. He is the editor￾in-chief of MATI BOOKS and an architecture critic.
No. 639 SERIES Hyon-Sob Kim Park Junghyun Suh Jaewon Cho Hyunjung RE-VISIT Plateau Beaubourg Art Center Plan Beaubourg Center Centre Pompidou SPACE Group SPACE Building Kim Swoo Geun Yoon Seungjoong Kim Wonsuk Dom-ino shallow space overlap SPACE No. 60
LIST
bookmark_border
favorite_border
5