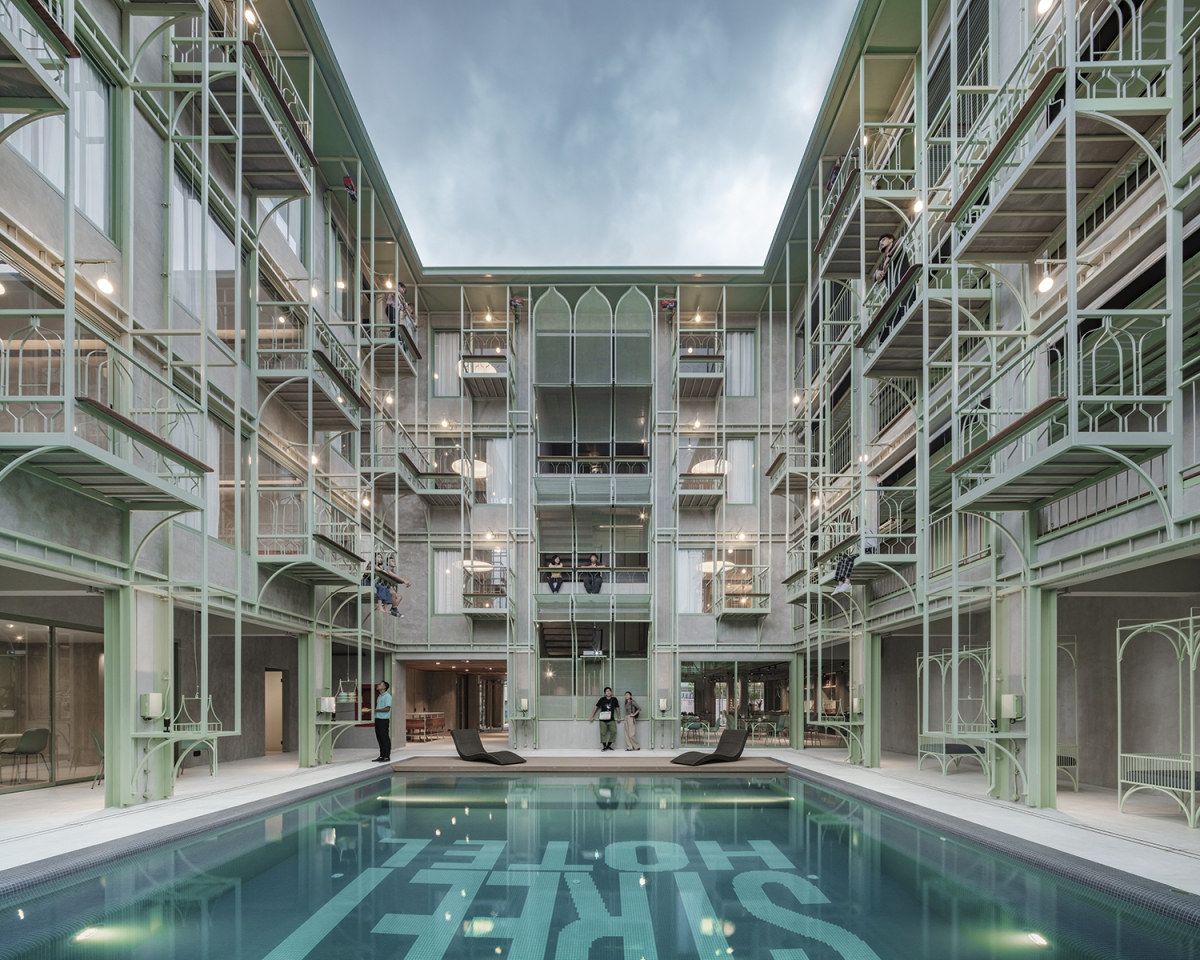 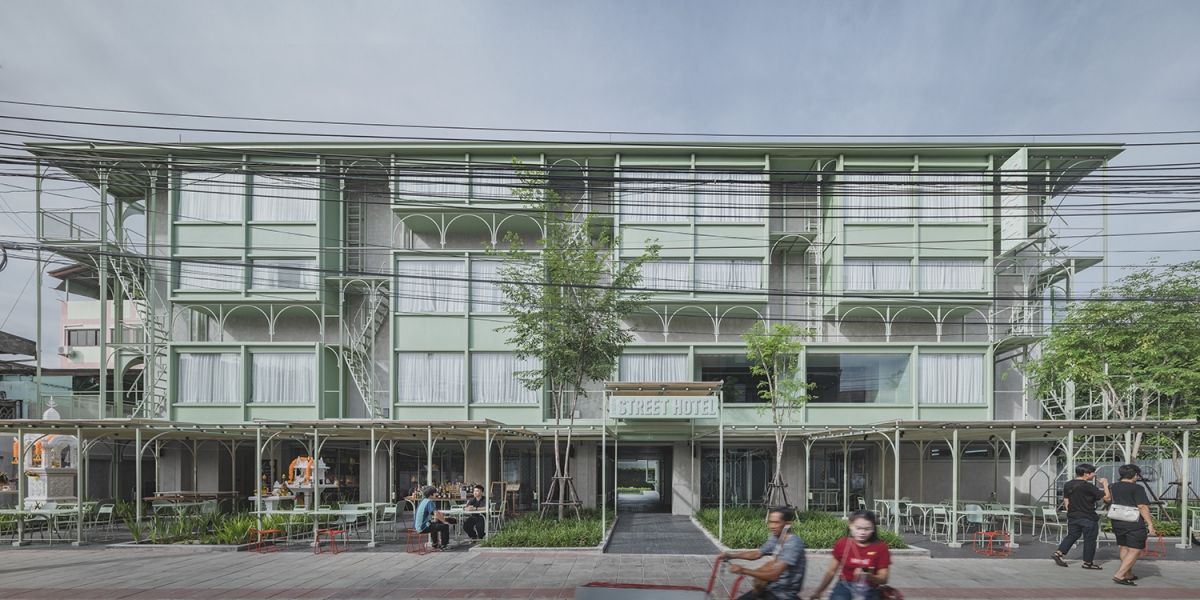 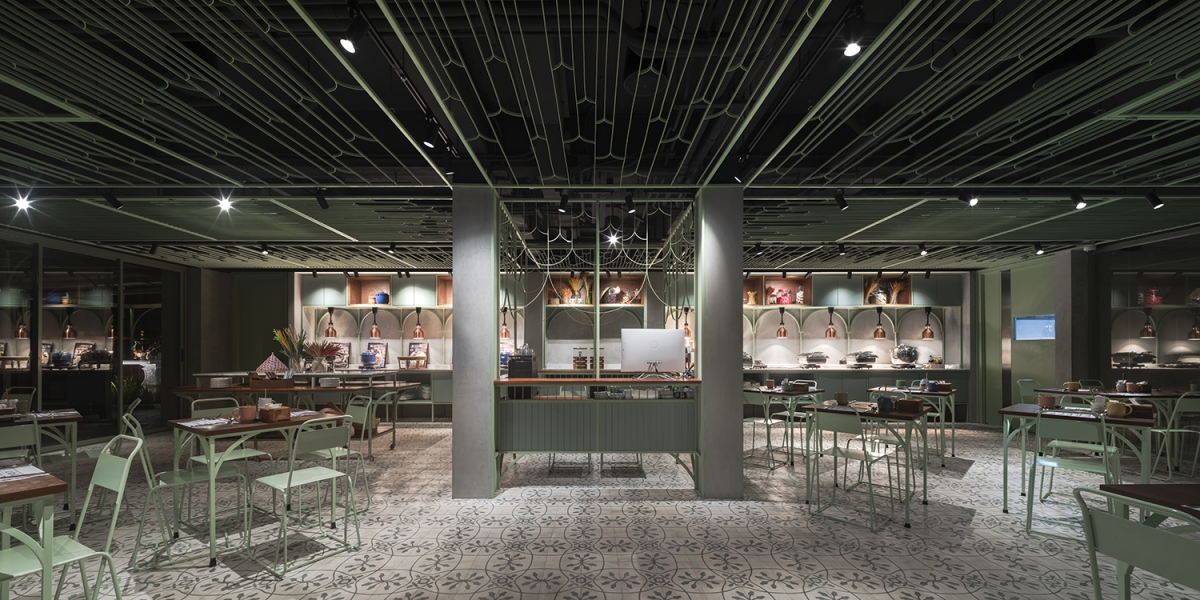 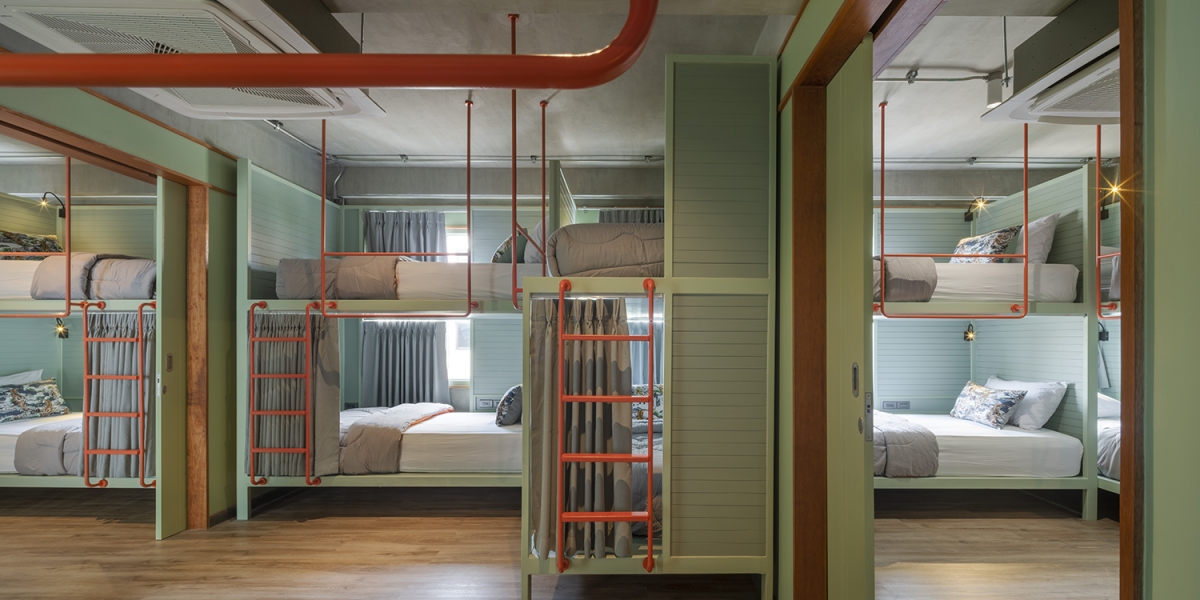 Park: I think the Samsen Street Hotel is the result of the aforementioned Thai architectural language. It is characterised by the complete reversal of the love hotel, a common but shadowy facility, from a public perspective, in Thailand. What was the main idea behind this project?

Chuenrudeemol: As in our other projects, the Samsen Street Hotel aims to revive and revitalise Bangkok’s public life and local communities. We agonised over various approaches to achieving these goals. The area of sidewalks (rabeang) created in the setback of buildings enforces a shadowy space for hotel guests and pedestrians to sit or cross, erasing the boundaries between public and private spaces. When necessary, mobile chairs, tables, and food carts can be brought out from the hotel and installed on roads and sidewalks, making the city more of a communal urban living room for the community. Soi (the term used in Thailand for a side-street branching off of a major street), which are usually used to accommodate building equipment, or alleys, can be transformed into vertical performance stages for street musicians on holidays and weekends. An outdoor theatre (nahng glang plang) was an attempt to connect the inside and outside of a building. The secret back alley, where lovers drive their cars for secret rendezvous, has been turned into an open space for the public and used as a community activity space, such as for watching movies outdoors as a group.
Park: The hotel is characterised by a non-closed and open connection. What functional changes did you expect from a social or urban perspective?
Chuenrudeemol: Creating dynamic boundaries and (physical and psychological) fences that enable variability between Bangkok’s public and private domains is an important recurring theme in our work. We believe that boundaries with variability play an important role in creating meaningful connections and appropriate separation according to various situations in cities. Samsen Street Hotel attempted to open and close space depending on the conditions. If you flip the low-height boundary panel used to close the hotel at night, it becomes a table. This connects pedestrians and hotel guests during the day. In Bangkok, as a jungle city, not everything is deemed appropriate for open conditions, but neither is private or public separation. We believe that an adjustable variable boundary is effective in exploring dynamic conditions in cities.
Park: Street stalls form a unique landscape feature and offer a direct link to Thai urban culture. We introduced an organic link between street vendors with the hotel space. What was the response of the government or the local community in the process?
Chuenrudeemol: The Thai government was not directly involved in the design. At that time, we considered issues related to street food vendors in Bangkok. The Thai government was advocating Singapore’s policy of clearing streets by kicking street vendors out of certain areas. The government wanted to remove all street food vendors, but we had to find a suitable and sensitive balance that could coexist with them. We also pondered the problems caused by the uncontrolled street vendor culture which was concerning the government: problems such as merchants occupying streets and sidewalks and seriously obstructing pedestrians and motorcycles, and not caring about trash or hygiene at all. As a result, theproject led to the start of the design of a more hygienic and sustainable on-road restaurant (food cart).
Park: The main components that visually connect the inside and outside are colour and thin pipes. It seemed to be an element when you mentioned in the ‘Thai street vernacular hybrids’, and I am curious how it developed through this scaffolding structure.
Chuenrudeemol: Like the Hotel Labaris, the Samsen Street Hotel is a project that we began exploring through Bangkok’s new hybrid architectural language. As a result of pursuing domestic and foreign architectural languages, the light green structure, or the scaffolding of the Samsen Street Hotel, aimed to integrate with the context of Samsen Street and to disguise the aesthetics of a romantic shantytown. Instead of applying the concept of a skin, a standard formal architectural language, we wanted to create a lightweight structure suitable for tropical cities. Therefore, we used the cheapest and simplest materials, but also common steel pipes and bars that were familiar to local businesses. These materials are also commonly used in structures attached to buildings, such as wire mesh attached to windows and balconies to prevent burglary in Bangkok. These steel pipes are also used for simple home-made objects and street furniture such as benches and tables, as well as the material used in street kiosks in Bangkok.
Park: Did you design everything in the interior? The concept of architecture naturally connects to the interior, so what directions were taken in the process?
Chuenrudeemol: We designed not only the signage, but the interior and graphics. As the project’s name, Samsen Street Hotel, is inspired by the appearance and culture of Bangkok’s ‘street’, the interior of the hotel was viewed as an extension of this street. The dotted line on the floor drawn like a lane is a guide to the ground floor of the hotel. As guests follow the dotted line, it leads from the lobby to the swimming pool and rooms. Instead of expensive and colourful materials, the ceiling presents a new approach by finishing with a steel tray of common industrial metal ducts used to organise machinery, electrical equipment, water and communication lines.

​Exterior view of the existing building from the street (©Chatpong Chuenrudeemol), The existing building as a typology of the curtain sex motel (love hotel)
Park: CHAT Architects (CHAT Lab) conducted ‘Bangkok Bastards Research’ project. What topics and content are employed there? How do these studies relate to design work?
Chuenrudeemol: The Samsen Street Hotel is the result of ‘Bangkok Bastards Research’, a study on Bangkok’s vernacular architecture by CHAT Architects that has now been ongoing for five years. As mentioned earlier, the study began as the first step toward the goal of creating a genuine and ‘living’ architecture in Bangkok. I sense that everyday architecture found on the streets of Bangkok, from street food vendors (food carts) to shantytowns and illegal pop-up markets, all share the same DNA as the phenomenal ‘bastards’. It is a pure, immature, and sincere design logic made by the residents’ hands. Through this, people solve problems that appear every moment in their daily lives through the most unique, regional, variable, and novel home-made methods. It uses the cheapest materials to produce maximum efficiency. The Samsen Street Hotel is a project to renovate a curtain sex motel (so-call love hotel), one of the more underground world that are rarely acknowledged. This type of architecture features the characteristic of protecting the privacy of those who want to enjoy a secret love affair. The spatial arrangement is not so different from other buildings, and one enters through a tunnel-type ground passage in a car with thick tinted windows. Then you face a parking space covered by red (or blue or green) curtains attached to the room. When they leave the building, they exit through a secret exit leading to the next alley without guard monitoring. While studying the housing of Bangkok construction workers, we found that a temporary residence of a useful nature consists of two components. They are core rooms and scaffolding structures. The main cabin is a small, simple residential unit where construction workers sleep. Scaffolding is an open outer space like a balcony, but it is a light structure covered by a roof that serves as a multi-purpose outdoor living space for movement, meals, cooking, laundry, and social companionship. Scaffolding space proves itself to be a major urban architectural element that adapts to tropical climates, protecting the guest rooms from the outside environment, and weather conditions such as sunlight and rain. At the same time, it is often a transitional space within tropical cities and a social factor that enables interaction.
Park: In 2018, you was invited to the ‘KIA Convention & Exhibition 2018 International Conference’ held in Jeju Island to introduce the construction work and participate in discussions. What do you think Seoul looks like compared to the situation in Bangkok?

Chuenrudeemol: I think Bangkok and Seoul share very important metropolitan and architectural conditions. Thailand, the only Southeast Asian country that has never been colonised, is also the most influenced by the West. This history goes back to the reign of King Rama V, who strategically managed the relationship between the United Kingdom, which ruled Myanmar, and France, which ruled Cambodia, Laos and Vietnam by making the Kingdom of Siam a strategic buffer. Thailand actively accepted Western culture as an equal partner rather than succumbing to compulsory Westernisation. As a result, Bangkok, the capital of Thailand, has become one of the global cities representing Southeast Asia. This was however a double-edged sword. The ability to imitate and copy foreign cultures and trends like chameleons eventually led to the loss of our identity. Seoul must be suffering from the same dilemma. Korea has a unique position in the global technology market, fashion market, and global pop culture (K-POP, K-Drama). I think Seoul, which has become a global city representing Asia, is still looking for its own soul, just like Bangkok. 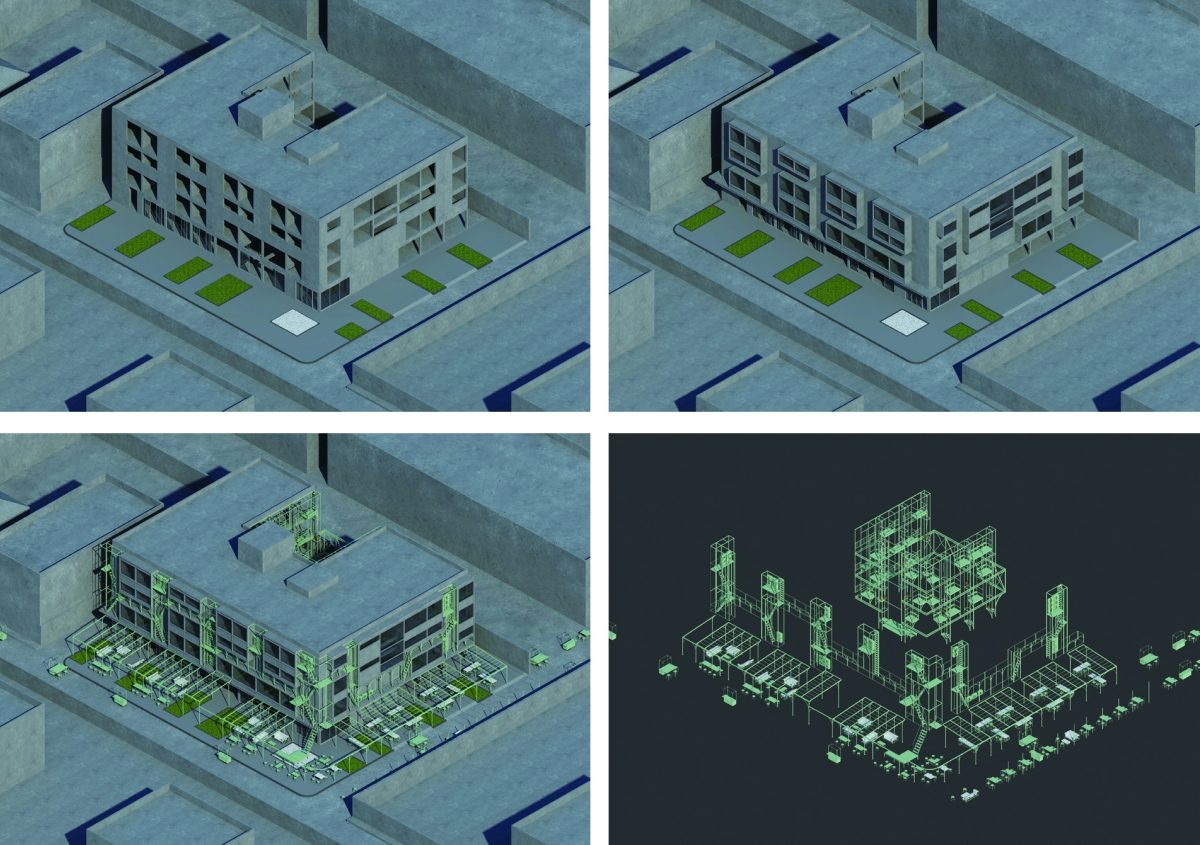 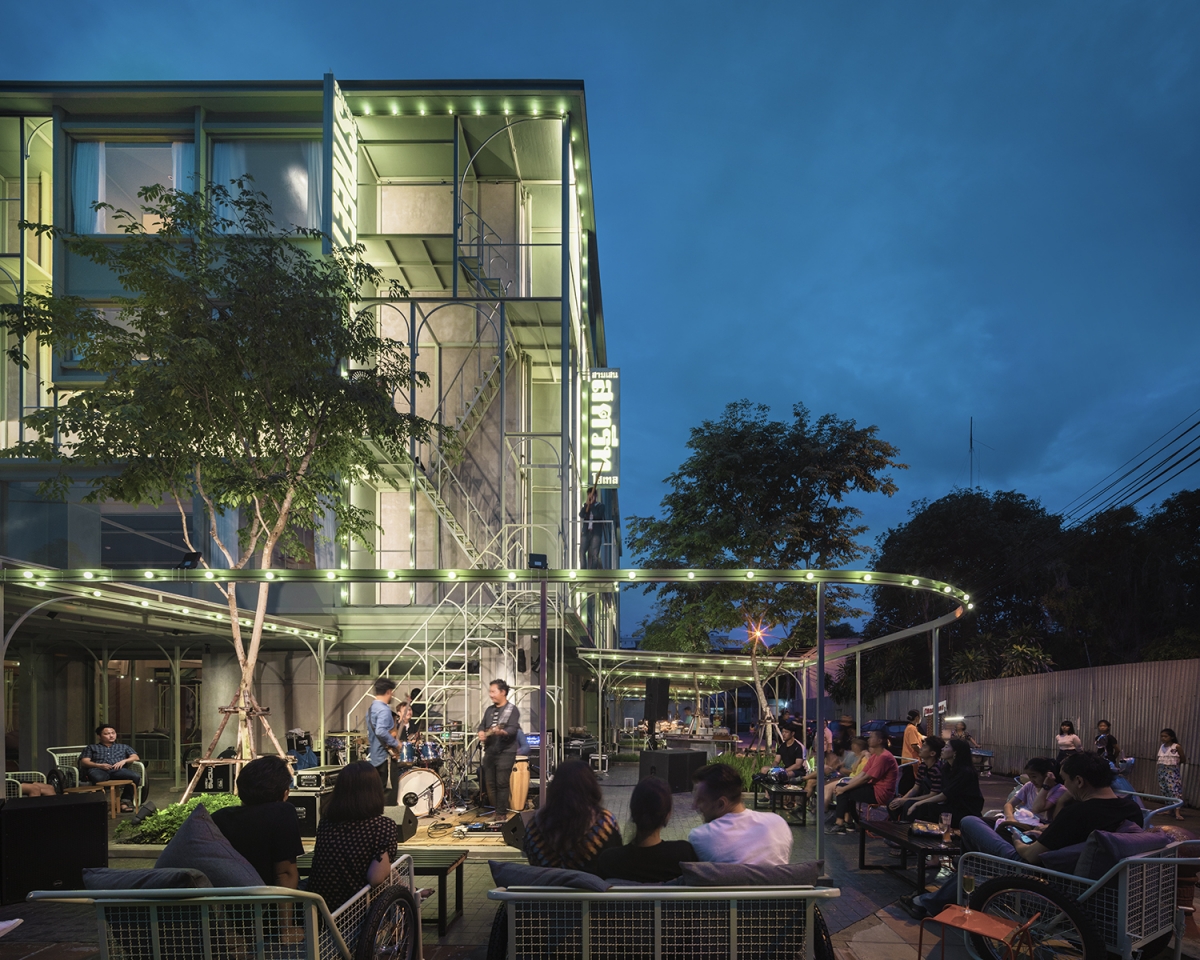 Chatpong Chuenrudeemol
Chatpong Chuenrudeemol received his bachelor of arts degree in Architecture from UC Berkeley and completed his masters of architecture from Harvard University’s Graduate School of Design. He worked at Fernau + Hartman Architects in Berkeley and office dA in Boston. After returning to Bangkok in 2001, he founded his studio, CHAT Architects (CHAT Lab), in 2012. Deeply fascinated by Bangkok’s mixed characteristics (beauty and ugliness), he aims to capture the true nature of Bangkok and revitalise it through ‘Bangkok Bastards Research’.
Park Changhyun
Park Changhyun did his M.Arch and at the Graduate School of Architecture, Kyonggi University. He is currently the principal at a round architects. He won the 32nd KIA Award for his SKMS Research Lab, the Seoul Metropolitan City Architecture Award for his Joeun Sarangchae, and the Kim Swoo Geun Preview Award for his Jeju Mujindowon. He is also the winner of the Iconic Award held at Germany in 2019 for his Jeju Seoho-dong Residence. He has taught students at Kyonggi University, Hongik University, and Korea University from 2002 to 2018, and he is currently leading a project mapping the Korean architectural landscape by interviewing about 60 architects from Korea, Japan, and Portugal.
No.641 April 2021 SERIES Park Changhyun Southeast Asia CHAT Architects CHAT Lab Chatpong Chuenrudeemol Thailand Bangkok global architecture typology bastards tradition Samsen Street Hotel scaffolding food cart humour
LIST
bookmark_border
favorite_border
11 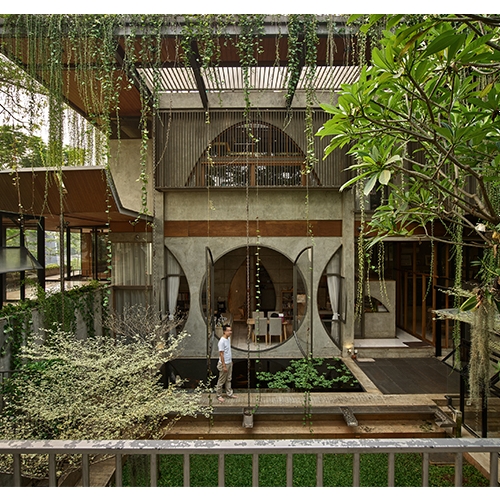 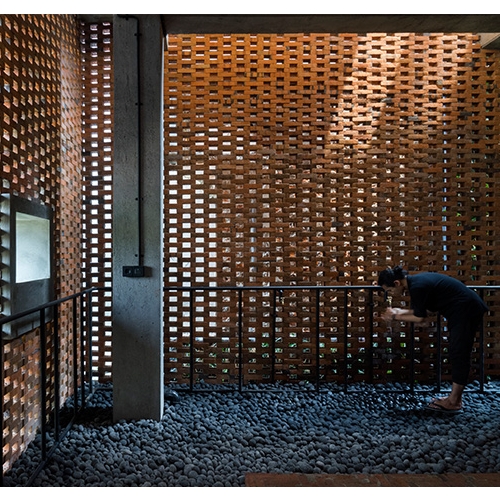 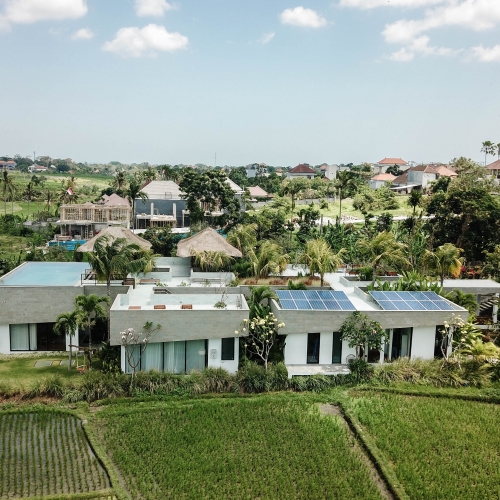