COSMO 40 located in Gajwa-dong, Incheon is a cultural complex formed from the renovation of a deserted chemical factory. The client intended to develop a facility that would suit the community’s needs by filling up the space gradually, which led him to ask Lim Seungmo (principal, SML) for interior design directing. SPACE interviewed Lim Seungmo who placed multiple follies inside the building to maximize the use of space. 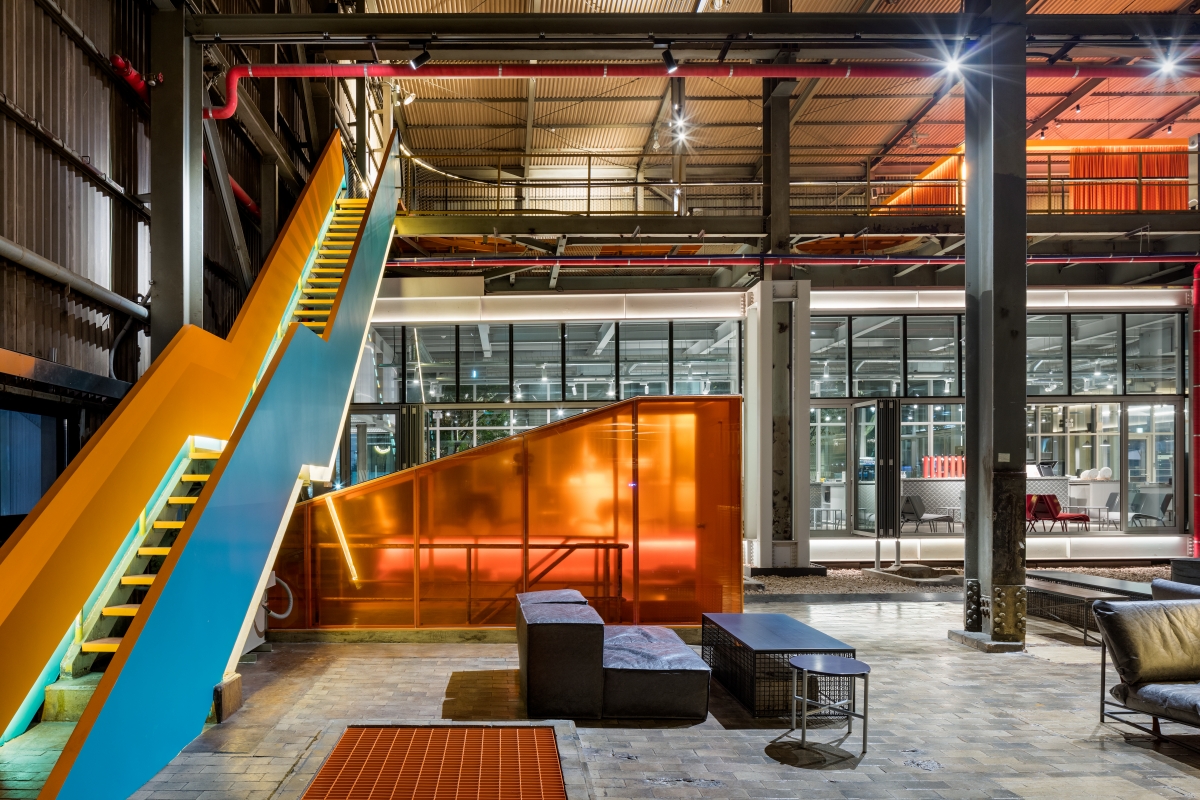 Kim Yeram (Kim): What lead you to design the interior of COSMO 40?

Lim Seungmo (Lim): I hosted exhibitions to elaborate the work of many architects, as part of an operating committee for the Young Architects Forum Korea in 2018. I introduced some of my interior design works to the audience, one of whom was the owner of COSMO 40. The first time I visited COSMO 40 was when I visited the solo exhibition of Kyungsub Shin in the fall of the following year. I was guided by Yang Soo-in (principal, Lifethings) who initially designed the facility, and at first glance it was like the void space from the film The Batman. I was mesmerised by the domino room where there were reinforced plastic fibres, and the grating floor located on the top. Some months later, I got a call from COSMO 40 that they wanted me to design the interior space of their facility, and simply by connecting the dots I was surprised to see how things were moving forward.

Kim: This project was divided into two phases: the first step was to convert the outdated factory, the second was aimed at revitalisation of the interior. What did you discuss with Yang Soo-in who laid the foundations for the initial phase of this project?

Lim: Yang turned this obsolete factory into a cultural complex. He created an overlapping experience between the past and the present by inserting a new mass into this 40-year-old building. Many discussions have been made regarding design strategy and spatial identity, but it resulted in a circulation plan that moves throughout the facility and heightens the dynamism of this space.

Kim: COSMO 40 has run various cultural programmes for local residents. Were there any problems or new demands during the two years of its operation?

Lim: They hosted numerous events including DJ concerts, exhibitions, public talks, skateboarding contests, and so on. The client has been criticised for the lack of efficiency in the operation of events, given the depth and size of space. So the improvements made to bunker on the first floor and mezzanine floor, as well as to the third and fourth floors, were made for to increase capacity by hosting many events at once.

Kim: What were your intentions behind the concept of the ‘Folly’?

Lim: I have long pondered what this factory space ought to contain. Can a place of this length of existence play host to various activities formed around an architects’ design? Customarily, follies are sculptural objects that focus on shape rather than function. However, the follies of COSMO 40 have distinctive functions while remaining aesthetically pleasing objects. This is like Gwangju Folly, which functions as an observatory space or a bus stop. I intended to embrace a wide variety of events and tried to develop organic networks for each folly by placing them in different locations. I was so serious about it that I went for 40 follies at the same time. (laugh) 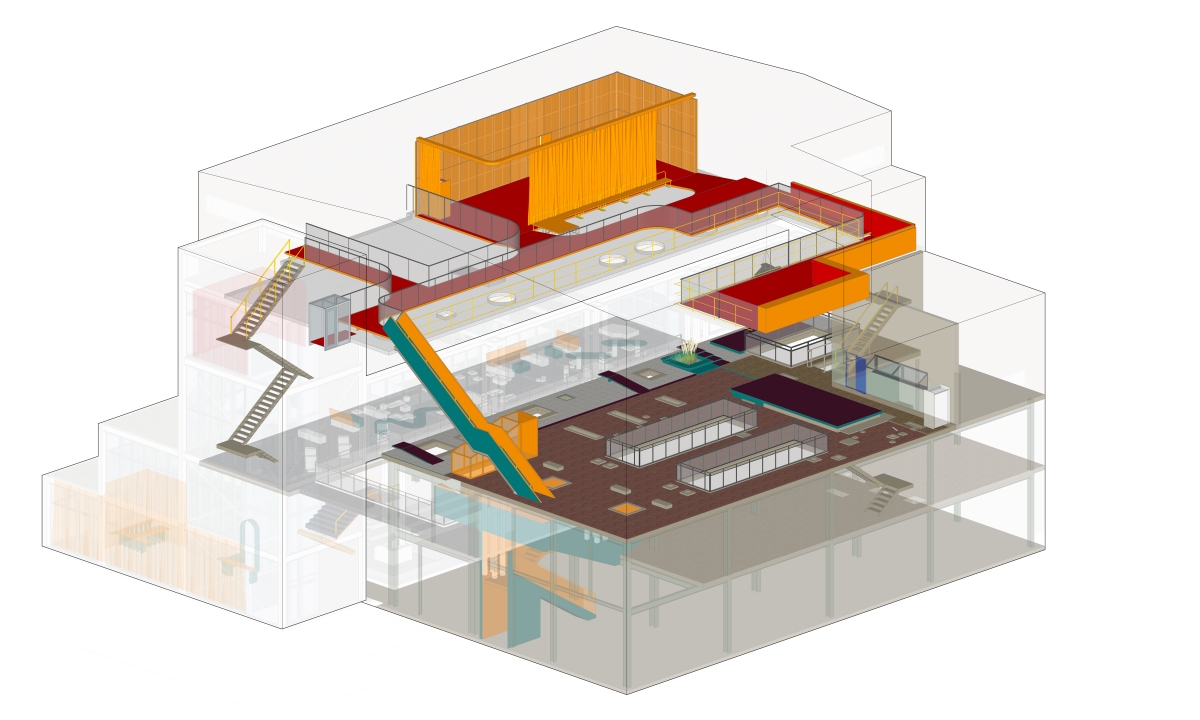 Kim: Please explain the follies of COSMO 40 in terms of their differing styles.

Lim: They include follies that visualise links between spaces, follies that accommodate events, follies for relaxation, follies as decoration and background objects. The green steps suggest the continuation of the programme by connecting the third and fourth floors, and the space on top of the grating floor on the fourth functions as a stage. Follies next to the café in the bakery serve as a bench, follies radiating fluorescent light create an optimum atmosphere for photography.

Kim: Are there follies that are yet to be realised?

Lim: I couldn’t realise ‘COSMO Cat’ which would link the first and third floors. It resembles a cat, serving as a ticket box as well as stairs and a viewing parlour for video displays. I thought this might encourage a more efficient use of space as it guides visitors a multipurpose room on the first floor. The colour scheme has been adjusted on the second floor with black stone tiles for creating exhibition space, but we couldn’t install furniture. I guess the work will continue once the existing follies have ​been completed and can no longer accommodate our expanding programmes. The number of follies decreased in accordance with the client’s request, but it is plausible to build a reduced number of follies. Wouldn’t it be better to leave some space for the next project architect and the building itself?

Kim: The grating floor on the fourth floor, which was previously inaccessible, has been redesigned. How did you renovate this space that still bears the traces of its past identity as a factory?

Lim: There is a piercing mark punctured by pipes on the surface of the steel grating floor. It was bent and stamped during construction, which inspired me as space inevitably contains the memories and atmosphere of a factory of the past. I fixed the grating floor by installing columns to support the new red deck that had been severed from this structure. Looking down the deck, there is a glass ceiling that houses the café, which personally I like the most as it epitomises the relationship between the existing building and the new space.

Kim: Colour is used vividly throughout your commercial space portfolio. COSMO 40 appears to be one of the prime examples.

Lim: There are various methods when renovating an old building, and I chose to juxtapose the old and the new parts of the building in this project. Harmony is established by the logic that prizes both old and new elements as they are. The use of orange color was chosen as key character in the building’s profile as these colours defined the adjacent industrial complexes. The hues remained similar, but the saturation deepened to express its distinctive new identity.

Kim: Colours depend upon materials, as they express themselves differently on different surfaces. Which material did you use in particular for the design?

Lim: Coloured glass and velvet curtains are a good example. Opaque orange glass was attached to a wall that was once used in the factory as a grating panel, and I intended to reveal a slippage in time by placing them together. The velvet curtain on the fourth floor reduces glare by absorbing the intense light streaming through the skylight and partially blocking the noise from the large space.

Kim: There are a growing number of project owners and creators based in Guwol-dong and Gajwa-dong the old civic towns of Incheon. COSMO 40 is at the heart of these towns. What attracts the people here?

Lim: The client once drew an analogy through an allusion to the bowling game. Incheon has fewer cultural spaces compared to Seoul, and all it needs is one good looking bowling pin that is able to touch other pins altogether—this area was in dire need of this catalyst. ‘SERVICE CENTER’, a design studio nestled in the second floor of this building, plays this role in Guwol-dong. There are many creators in the vicinity of COSMO 40, such as a surfboard workshop, a natural dyeing shop, a doll store and so on, and they can perform bigger and various activities as a cluster rather than acting alone. ​ 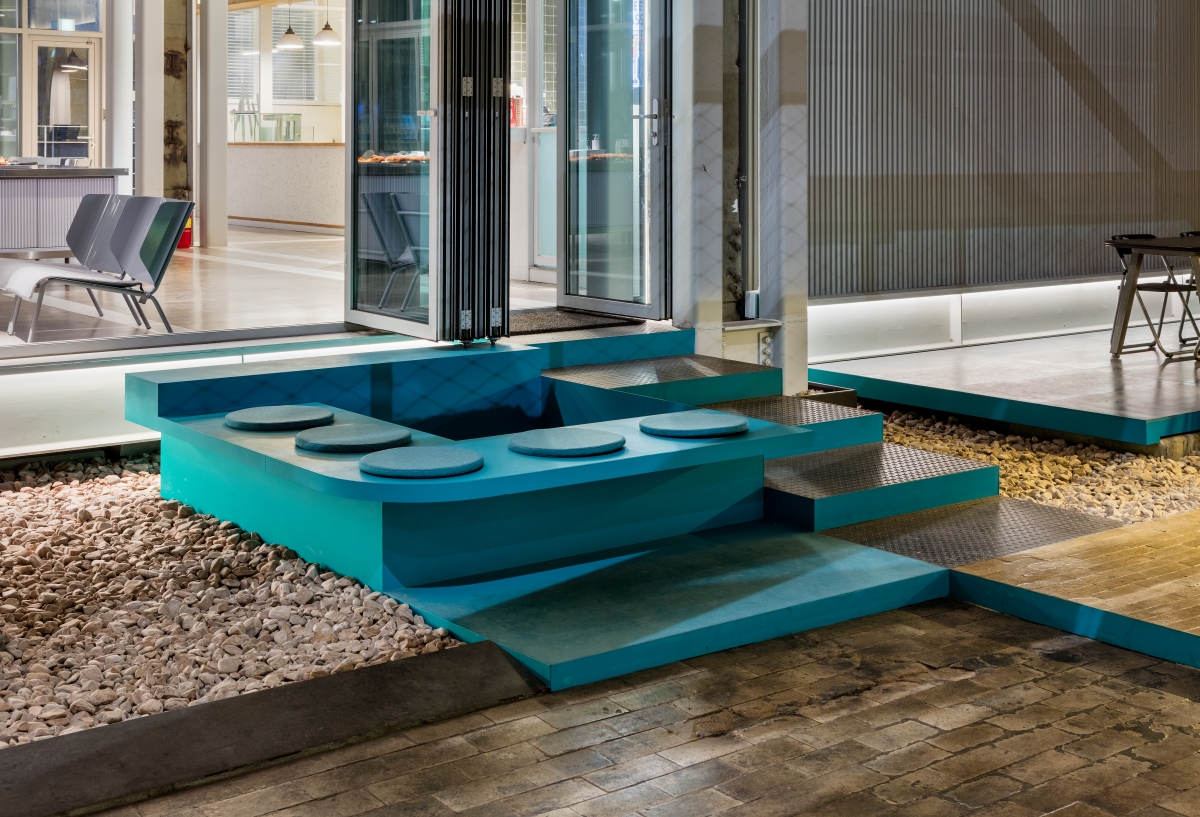 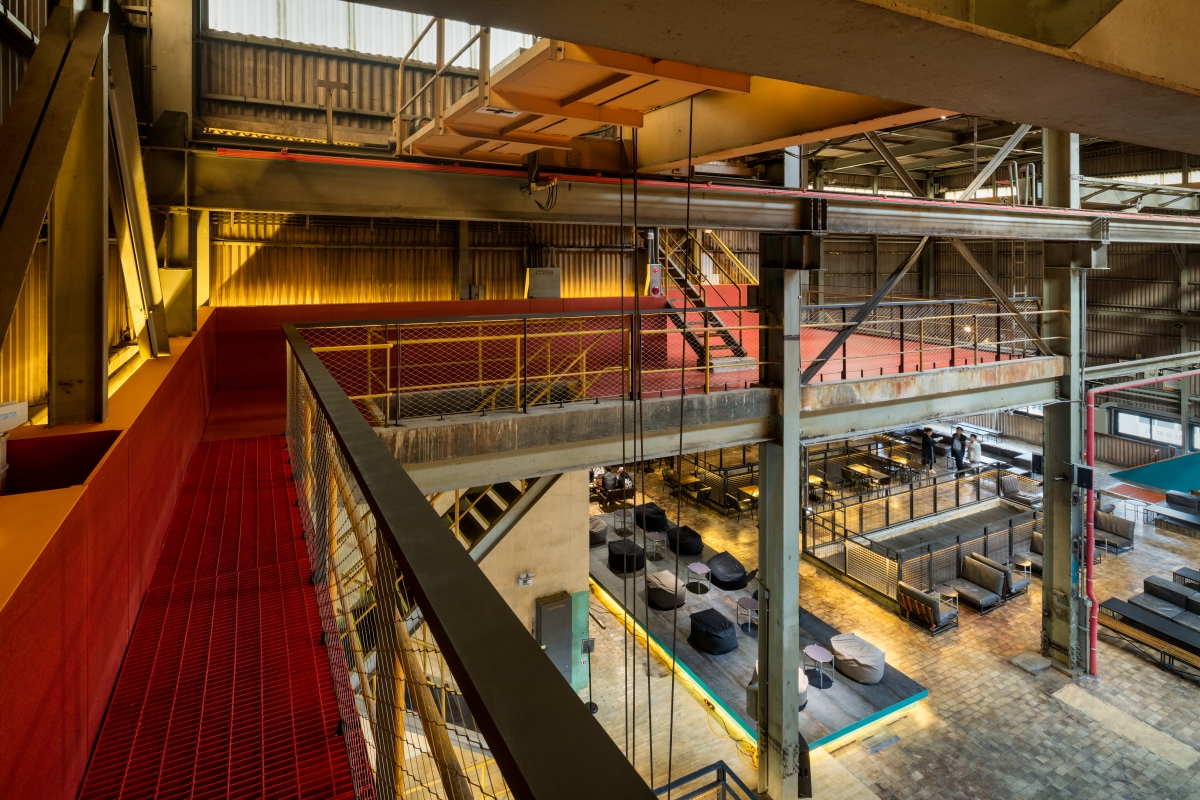 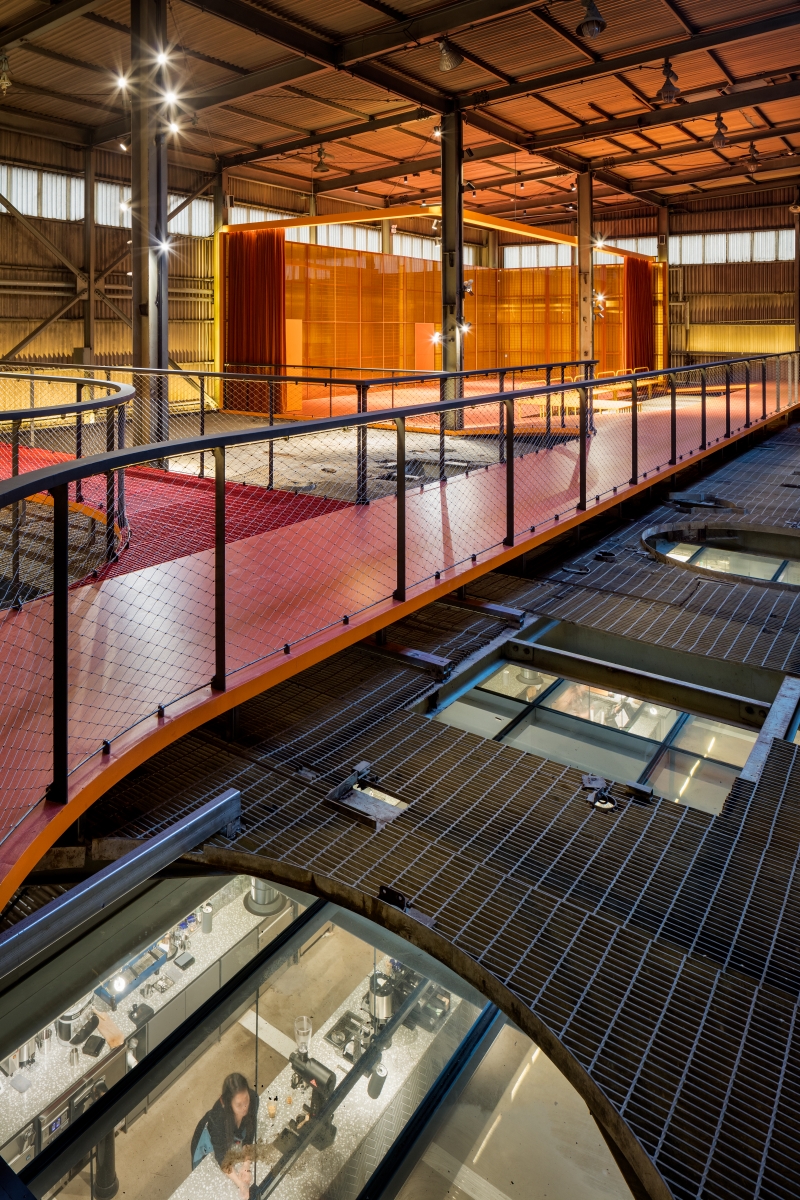 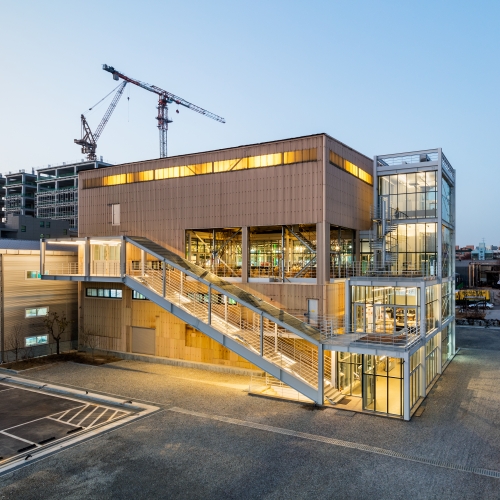 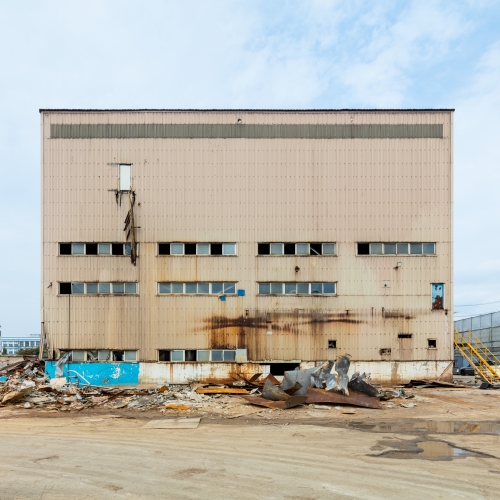