Winning Proposals of the Competition for the 3rd Generation New Towns

From November 2019 to August 2020, a design competition for seven districts (Gwacheon-Gwacheon, Wangsuk-Namyangju, Wangsuk2-Namyangju, Gyosan-Hanam, Gyeyang-Incheon, Changneung-Goyang, Daejang-Bucheon) was held. A significant change to the plan by Ministry of Land, Infrastructure and Transport (MOLIT) and Korea Land & Housing Corporation (LH) was the ‘Integrated Master Plan for Urban and Architecture’. According to the methods, the master plan for the three￾dimensional cities, encompassing cities, buildings, and facilities, will be developed from the planning stage, while the master plan of the cities and architectural plans will be determined based on the plans for land use.

There were individual requirements for each competition, such as general guidelines that demanded a new vision for the future city centred around core values such as ‘job provision, transportation-friendly and nurturing-friendly’ environments, as well as planning directives that were tailored to each specific component illustrated by the district plans. Gwacheon’s public housing complex, which heralded the 3rd Generation NewTowns, was organised in November 2019 under the theme ‘A Shared City for People, Streets and Communities’. The ‘Inclusive White Zone’ was praised for its urban spaces inspired by the ridges and furrows of rural land cultivation, creating the archetype for a new city with an emphasis on publicity. In January – March 2020, four contests were held under the theme of ‘Coexistence and the Coexisting City that Grows Together’. Wangsuk-Namyangju’s ‘Symbiosis City’ garnered attention for its proposed establishment of a multipurpose band axis to accommodate the demands of a flexible future city, and a three-dimensional space and transportation system strategy. Wangsuk2-Namyangju’s ‘Slothophical City’ consists of a nature-friendly residential environment that draws upon nature such as wind roads, hills, and rivers, a low-density decentralised urban structure, and an industrial cluster where various actors interact received favourable comments. Gyosan-Hanam’s ‘Co-living Platform’ was evaluated as a concept that clearly solved urban space organisation and urban network concepts in accordance with the reality posed by the Jungbu Expressway and its rest area dividing the city and its residential areas. Under the guiding concept of inclusion, connection, convergence, and sharing, Gyeyang-Incheon’s ‘2030 Gyeyang, Hyper Terra City’ set the east-west urban axis and the green axis by representing the movement of people and logistics, and raising the access to green area in all living areas. Announced in June 2020, the international competition for Changneung￾Goyang, and Daejang-Bucheon was held on the international platform under the theme ‘Together-growing Symbiosis city of Coexistence’. In particular, the ‘First Village Demonstration Complex’ was included in the competition which promoted participation. The ‘Inclusive Connected City’ of Changneung-Goyang was praised for its local focused design by actively using the natural environment of the Changneungcheon and cultural resources of Seoleung, ‘Open Field City’ for Daejang-Bucheon received acclaim for its adjacency to central business district, realistic landscape design by aligning urban support facilities in line with surrounding economic zones such as Bucheon, Incheon and Gimpo. (Each proposal can be amended and altered during the planning process). 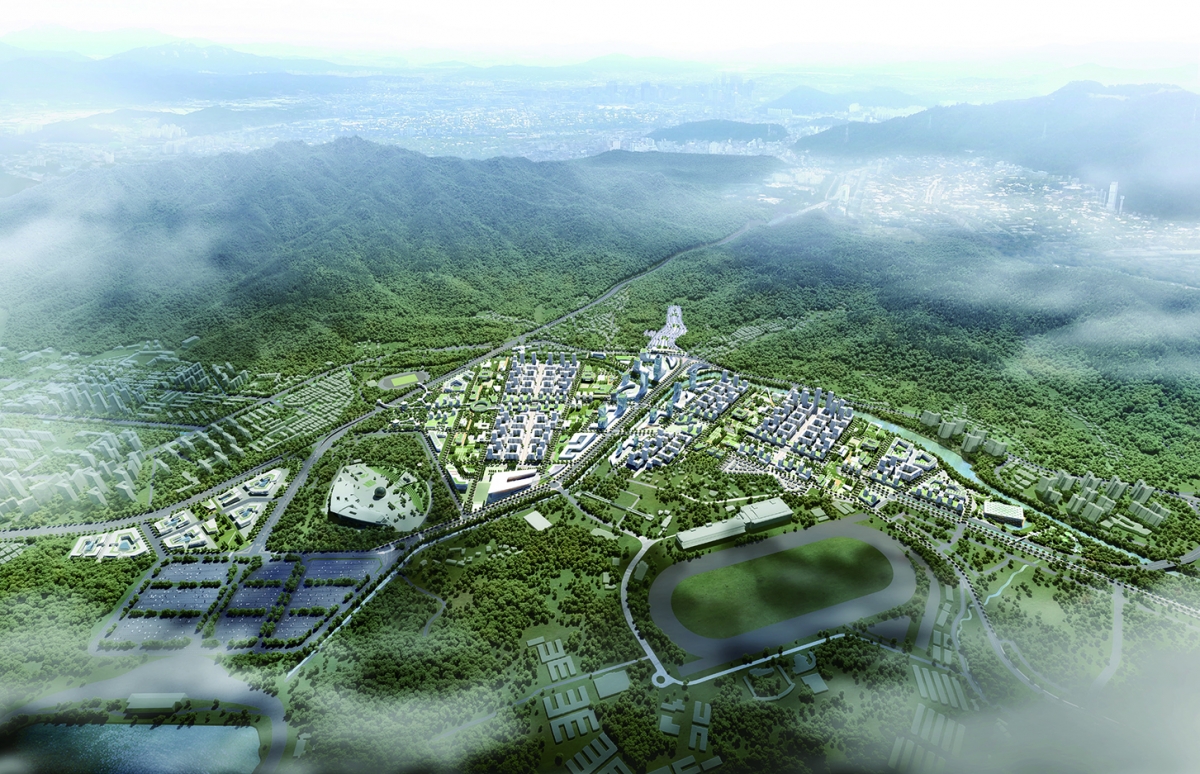 We propose a new type of shared city in which citizens’ leisure activities, daily lives, and workplaces coexist, while also securing the sustainability of the natural environment. We found the solution in farming, namely in the ‘Irang (ridges) and Gorang (furrows)’. Irang is a space full of the necessary facilities, while Gorang is a space that connects nature to nature within the city, both becoming places for exchange and community activities in which people flow and settle. The inclusive white zone built upon the natural flow, tore down the physical boundaries and connected the city to nature, while the human-scale street courses through the landscapes of different cities and natural landscapes to connect nature, the city, and the lives of citizens. Along the way, the urban community is revitalised, and the city completes its establishment, becoming a place where every life and natural realm is connected. written by SIAPLAN Consortium 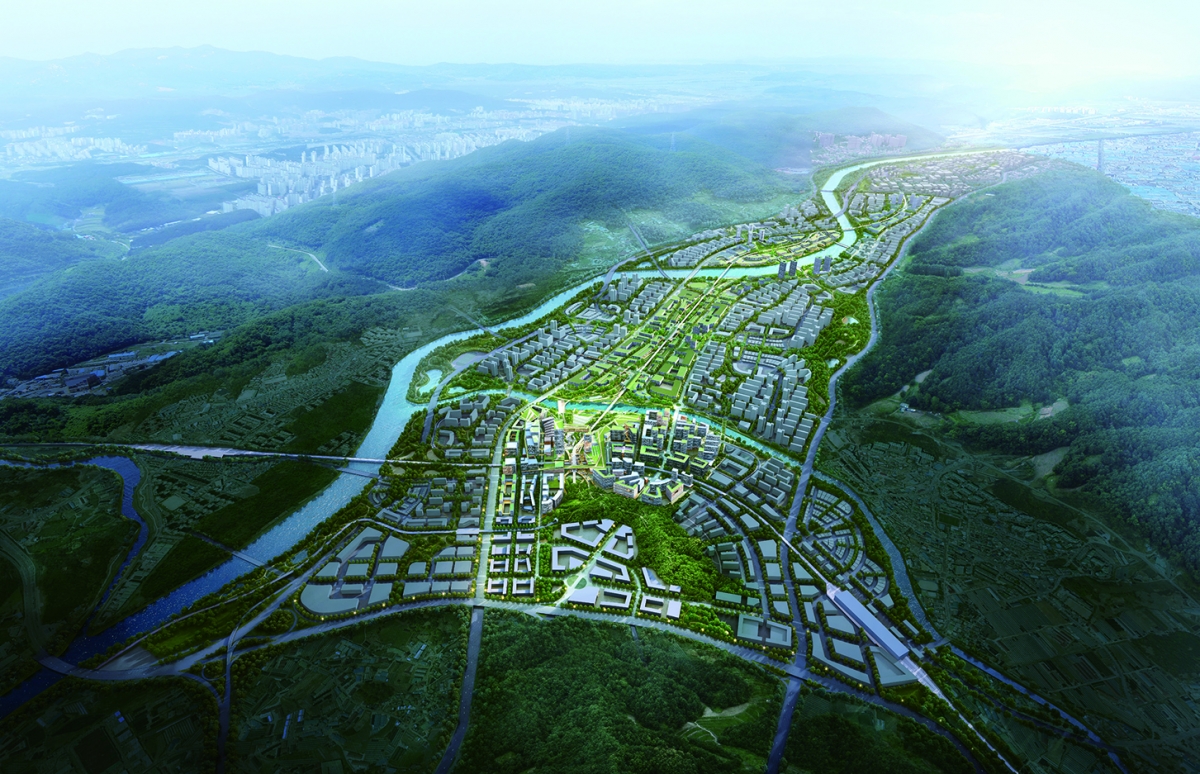 The northeastern area of the metropolitan is lacking in self-sufficient industries, public cultural and arts facilities, so to supply the need for these functions one much turn to Seoul. We proposed ‘Economic city, Ecological city, Hyperconnected City, Happy City’ through the 4D land use plan, specialised green system and transportation system. The construction of the three-dimensional structure of the S-BRT route, in which the upper S-BRT route, the lower bicycle route and the pedestrian route are merged, is at the heart of the plan that considers connectivity with neighbouring cities. Through a three￾dimensional multi-use band, a park-centred educational cluster, and a social-mixed space plan that minimises physical divisions between classes, a three-dimensional multi-city was created to erase physical or psychological discrimination. written by DA GROUP Consortium 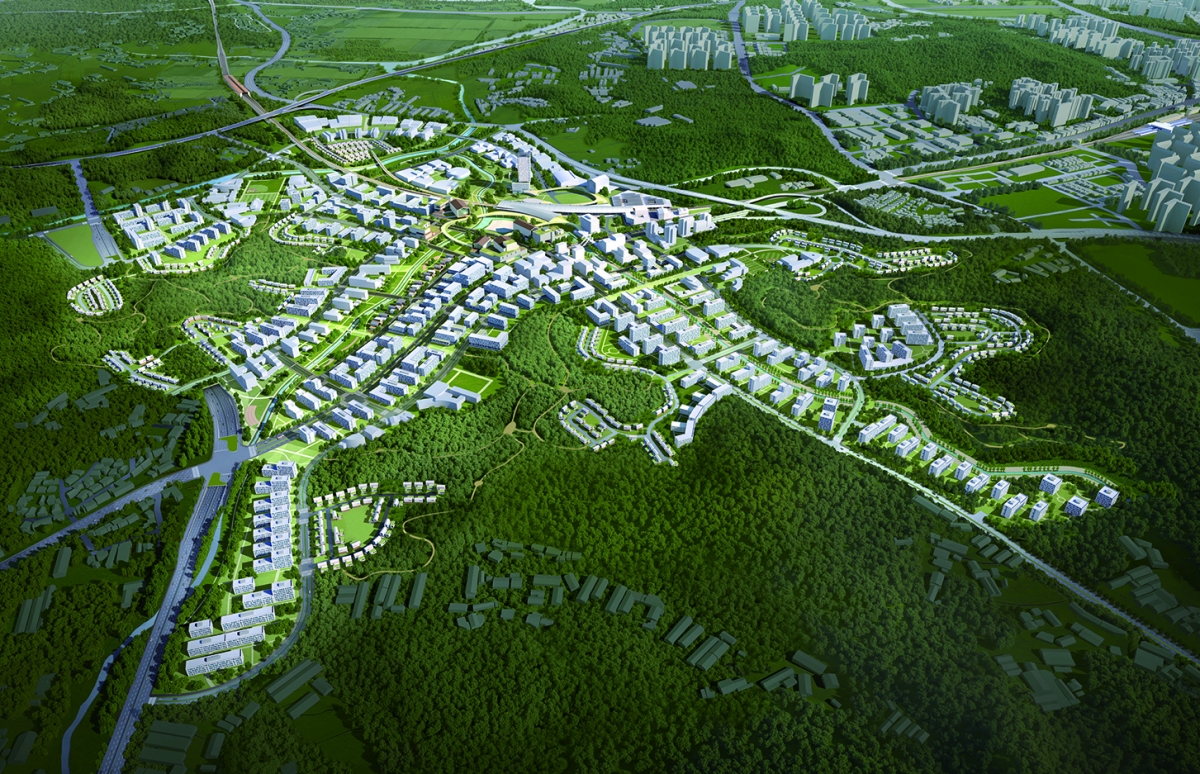 The proposal was made for a ‘Slothophical City’ centred on prioritises a culture that realises a slower pace of life by putting the natural terrain to good use in a small city where the hills and rivers are in harmony. A road network sensitive to the topography disperses traffic and lowers the speed of the pedestrian-oriented city. The waterway is at the centre of a leisurely pace of life, reaching the waterside within five minutes from anywhere in the city and leading to a subway station. In order to create a human-scale city in which the city and nature can coexist, we laid a discrete path between small and medium-sized blocks. A three-dimensional pedestrian bridge was placed where the three waterways meet, in order to create a specialised area that encompasses the stations and major facilities. written by G.S Architects Consortium 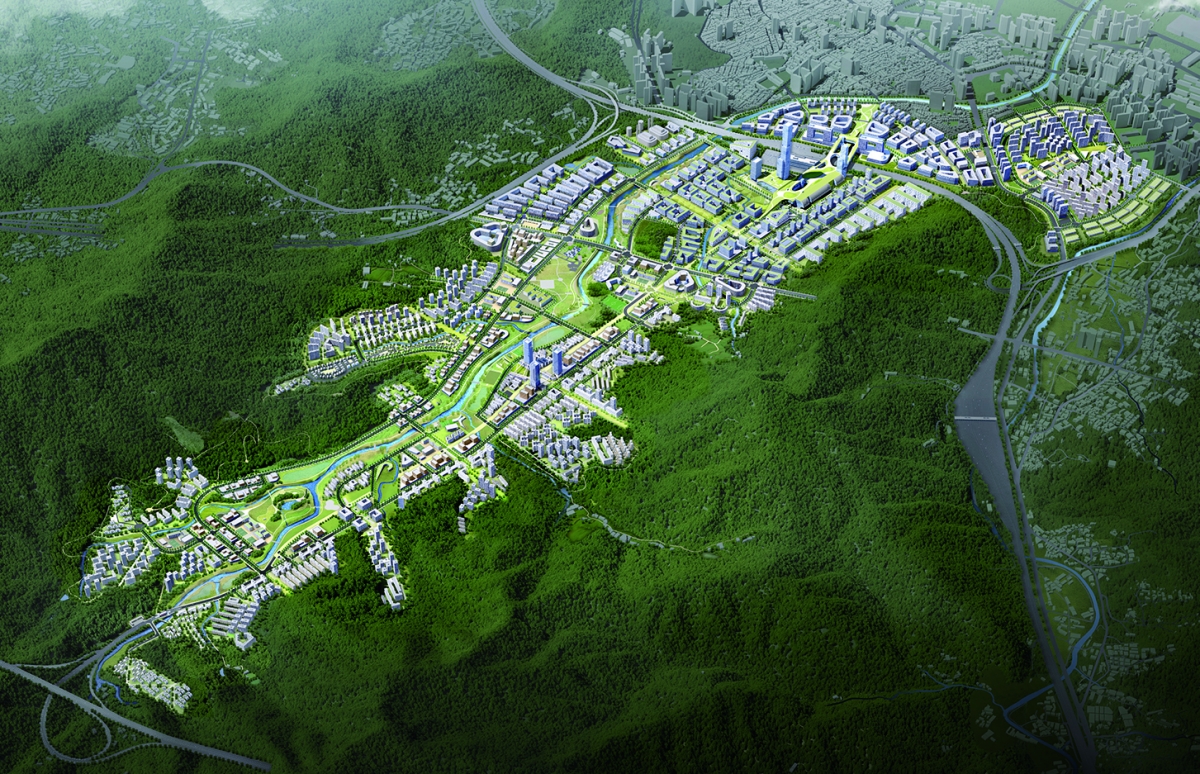 We proposed a city centred on five concepts in collaboration with architects and urban designers. First, an eco-friendly city that will preserve traces of and the governing shape of the land. Second, a transportation-friendly city that respects the existing street system and develops a new multidisciplinary and multi-centred system. The green pedestrian axis formed by subway and S-BRT lines creates a white necklace that connects to the centres of other residential areas. Third, a child-friendly city that provides a diverse and rich experience by forming a living area with pedestrian-centric streets. Fourth, a city of opportunities and self-sufficiency through self￾organised or self-evolving multi-use spaces, white zone. Lastly, it is a city in which gradually changing lifestyles are realised, from residences to living spaces. written by GYEONG GAN Consortium 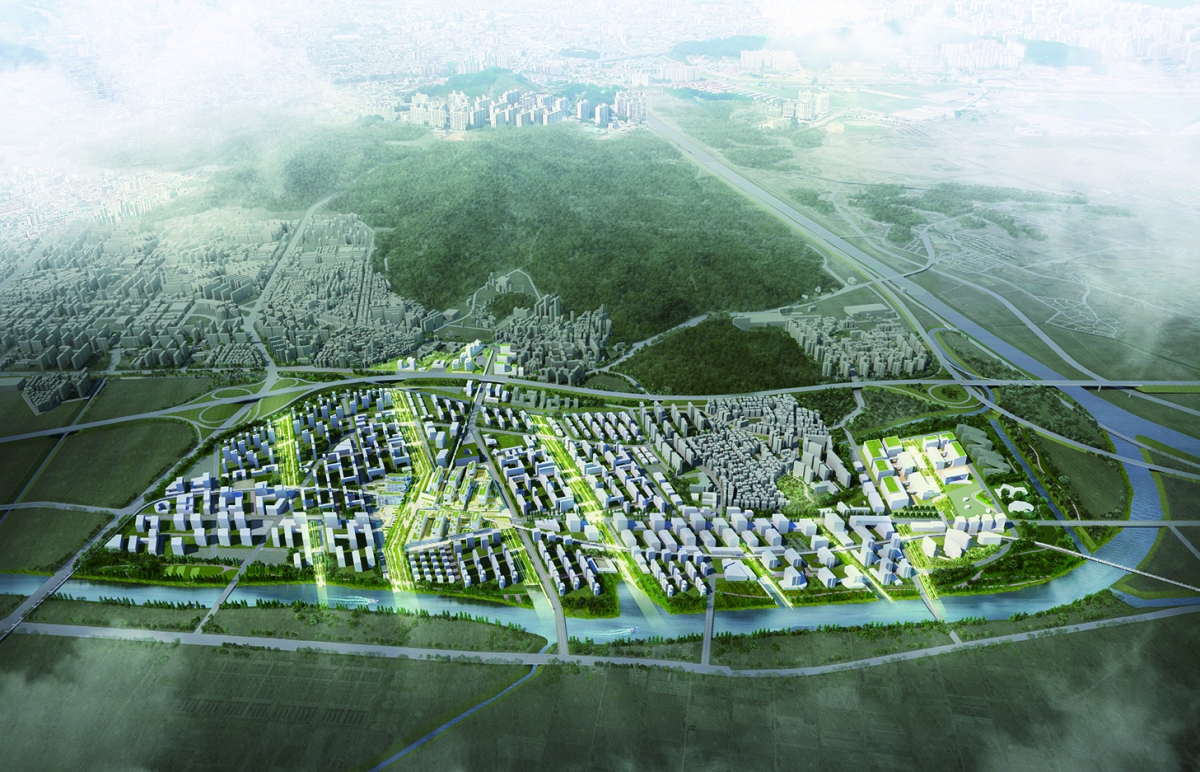 We planned a 60m wide homogeneous linear space called the P-PATH (Park Path) that could penetrate the entire complex in line with the future city that demands a comfortable, open and safe movement. The P-PATH is an attractive space in the ‘front of house’ that attracts scattered individuals and is connected to the S-BRT stop or public facilities. This is a strategy through which to realise a pedestrian city, and a medium space for a shared symbiosis city. The main arterial road, S-BRT, and P-PATH are all combined to form an urban centre space called ‘Terra (a new site)’, creating a pedestrian space separated from the vehicle. ‘Terra’ was planned as a three￾dimensional multi-use facility in the central space where green axis, road axis, and S-BRT are combined. written by Siteplanning Consortium 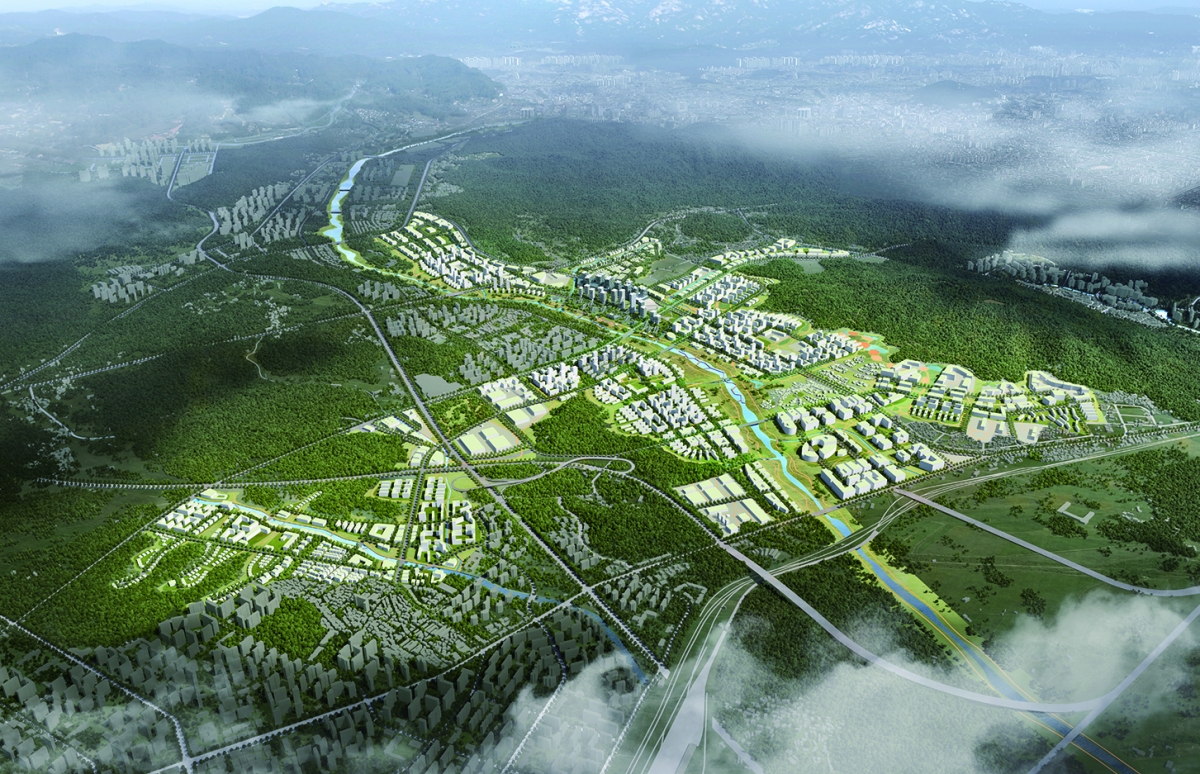 We proposed three visions: coexisting with neighbouring areas, symbiotic relationships with urban nature, and self-sustaining the next generation. The target site is between fragmented cities, villages, nature and historical sites. We distribute the main functional bases throughout the area and connect them centrifugally to the outside, while each of the bases are centripetally networked through the blue (water) – green (greenery) network. It is to induce the acts of movements and life in the city to become the act of taking care of nature. Green spaces that have grown together with their host cities could form a sustainable and resilient urban base. Now, cities need to explore new ways of interacting with different ways of working, living, leisure, and non-face-to-face environments. We intend to secure the settlement of the next generation by constructing an urban organisation. written by HAEAHN Consortium 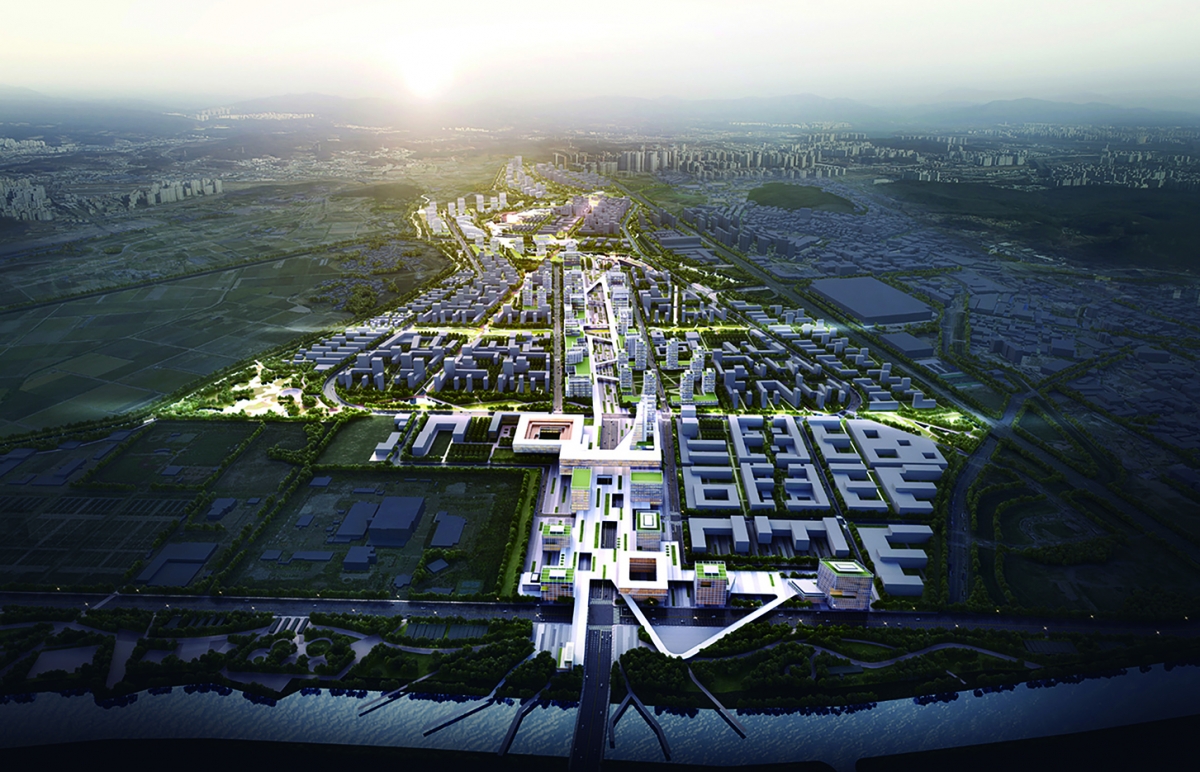 We proposed a city that would coexist with the surrounding area by drawing on the ecological characteristics of the original landscape. The junctions in the city contain the natural landscape and the surrounding fields, while the inside of the city is a multi-use band through which life, work and play commingle, creating a lively city contiguous with the surroundings in the existing isolated zone. First, a symbiotic city is made manifest through establishing connection to the surrounding areas and industries; second, an urban framework is formed that complies with the remote water circulation system and the shape of the land; third, a multipurpose band is planned in connection with the surrounding local industries to promote the city. The fourth is to compose a living area along the preceding three themes, while the fifth is to establish a flexible urban plan responding future social changes. written by DA GROUP Consortium​