International Design Competition for Korean Museum of Urbanism and Architecture: The Winning Proposal ‘A Recycling Assemblage’

Choi Eunhwa (Choi): The International Design Competition for Korean Museum of Urbanism and Architecture (KMUA) intended to create a ‘dynamic museum’ that would sustain future evolution and growth by accumulating and producing a wide range of content through linking the archive, exhibition, education and research activities. What was your interpretation of the guidelines for the competition?

Alejandro Zaera-Polo (Zaera-Polo): The most important idea behind our project was to make ‘the first architecture museum in history, designed specifically to contain actual works of architecture’, which would become part of its physical character. ‘A Recycling Assemblage’ is conceived as a work of scaffolding that will contain and incorporate parts of other buildings as a large-scale collage, and features a façade that future curators will be able to curate, just as they curate other exhibitions in the building. In treating the design as an assemblage of elements, we also aim to demonstrate to the general public how architecture is made. By adopting this assembled concept we aim to create an almost unlimited versatility in the curatorial activities. Everything can change: it is a scaffold, a shelf on which to locate architectural elements.

Choi: A Recycling Assemblage suggested recycling the structure of the 1960s and 1970s overpass and using it as the main structure for the museum building. How did you come up with this idea?

Zaera-Polo: As I mentioned, the museum was conceived as a scaffold on which to display architecture, almost as a megastructure, and therefore the recycling of highway sections appeared to us as an opportunity, knowing that many of these elevated bypasses are being dismantled across the country. Simultaneously, we thought that it was an opportunity to commemorate that age of optimism and febrile development of the 1960s and 1970s, in which Korea become an incredibly successful country, by radically transforming its urban environment. The highway overpasses remain a symbol of modern Korean development and we thought it was a powerful image to retain for the purposes of the KMUA.

Choi: In order for this proposal to be realised, it seems like it will be important to get hold of the beams first, which are the structural members of the bridge. When it was first proposed, the Nodeul Overpass in Seoul, the Baegun Overpass in Gwangju, and the Sangil IC Overpass in Seoul were specifically proposed as candidates. What is the current status of this? What processes and discussions will take place in order to realise it?

Zaera-Polo: As you can imagine, it is difficult to deliver this idea within present governmental procurement rules, which demand that all materials in government projects must be new and certified, and that purchase orders are made after proper bidding processes. The government has committed ambitious environmental targets in the K-New Deal. We think that this project is an ideal opportunity to signal a change in the laws of the country: perhaps in the near future, one might be obliged to reuse and recycle materials. This building may come to stand at the forefront of the avant-garde, marking a significant change in the Korean building industry, and standing as a global example in the reuse of materials. We do not know if it will be possible to complete this part of the proposal within the given timescale and the current legal and regulative framework in Korea. I guess that some regulations may need to be suspended or made flexible in order to achieve this exemplary status.

Kim Yukyung (Kim): There are two remaining primary tasks: the supply and the demand problem posed by the bridge that is to be dismantled, and the construction of structural members with the secured bridge members. First, we must consult the main agents in management – local governments, Korea Expressway Corporation, and etc. – and then later consult the demolition contractor with the transport contractor to ascertain the transportation methods and schedules. This is not only a matter of timing, which needs to be prioritized and to precede the process of actual demolition executed by the main agents of management, but also a matter of paying extra attention when executing the demolition, since the structure of elevated bypasses has to be carefully removed without any damage in order to be used as a structural member in KMUA. Even after undergoing this process of supply and demand, we need to identify the safety and durability of the bridge in its use as a structural member, also perform cutting and reprocessing based on the values derived from structural analysis. After all, hereby a single, reused structural member is ready for construction. However, these verified members must also be approved through another difficult gateway, in which they have to pass the adequacy review of the procurement system. 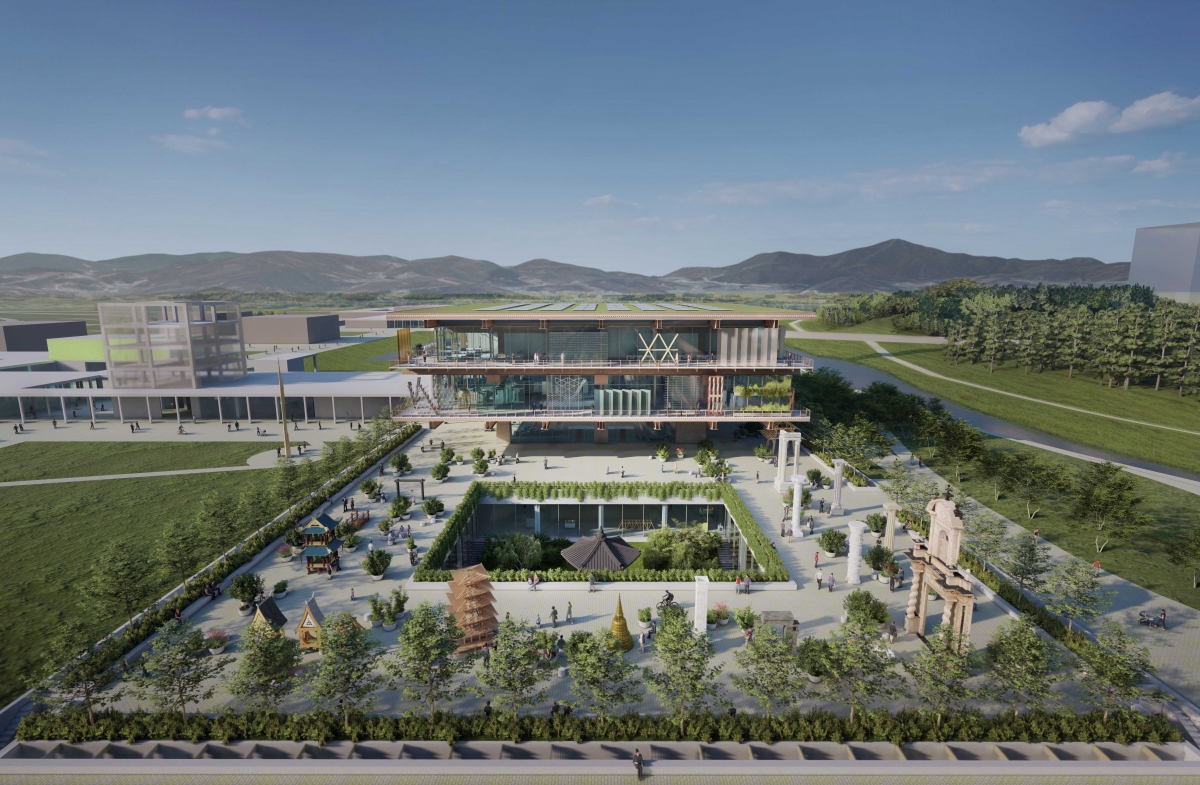 Choi: It was impressive to see your rendered image, in which the unit structure of the building, windows, and a part of the building envelope are positioned as real-scale objects in places, on the inside and outside of the museum. In general, museums that focus on the city and architecture tend to reproduce them through such as models, drawings, and photos, whereas A Recycling Assemblage considers how to displays elements from actual buildings.

Zaera-Polo: By trying to distinguish clearly an architecture museum from an art museum, we hope to address the typical problem of architectural curation, which is that architecture is usually exhibited mostly through models or drawings and does not offer the public an approximation to the real experience of the object. Our proposal is that the KMUA building itself will become an assemblage of full-scale works of architecture. One of our favourite reference points, in which we are deeply interested, are archaeological museums of the late-nineteenth century such as the Pergamon Museum in Berlin, in which fragments from real architectural structures are encrusted within the wider fabric of the building. This is also true of the British Museum in London or Kunsthistorisches Museum in Vienna. We would like to extend this concept to the garden of the museum and to its sunken courtyards, which we hope to convert into a treasure garden of architectural remnants. This idea is based on my experience as the curator of the façade section of the 14th Venice Biennale International Architecture Exhibition (2014), which consisted in gathering a series of mock-ups of different buildings and which could be experienced at full-scale by the public. Through that experience we realised that there is a huge potential collection to be formed of such artifacts worldwide, almost like the Victorians and the Prussians did in the late-nineteenth century, obtained now at a relatively low cost as these elements have not become yet collector’s items. However, we believe they are full of beauty, poetry and history.

Choi: The composition and scale of the space in museums varies greatly based on museum collections and exhibitions. Since A Recycling Assemblage has been designed to exhibit everything, from very small models to parts of real-scale buildings, there must have been some related concerns. How are the considerations of such differences at scale reflected in the interior and exterior spaces?

Zaera-Polo: We have based our design on the scale of the Duveen Galleries in the British Museum (the location of the Elgin Marbles) or the Egyptian extension of the Pergamom Museum have: 7.8m head clearance, with an open span of 16.2m. Then, on the temporary galleries we have a double height atrium of 12.6m height for the installation of very tall elements. Subsequently, both in the permanent and temporary collections, we have adopted a lower 4.8m height. We also use the difference in height to create public stands for public events in the galleries, and an opportunity to change viewpoints for large-scale objects. The variegated lateral daylight, emanating from the sunken courtyards and skylights, will also offer very different lighting conditions for exhibitions. The sunken gardens, the ‘treasure gardens’, and the terraces are considered to be alternative locations for exhibits, some of which will become part of the building façade and the governing experience of the gardens.​

Choi: I would also like to know your thoughts on the site and location of the project. There has been a debate concerning the pros and cons regarding the fact that the museum, which must feature Korea’s urban and architectural content, is planned to be built in Sejong, the new town, instead of Seoul. I wonder your thoughts are on this matter.

Zaera-Polo: We are simply responding to the brief, according to the decisions made by the Korean Government to decentralise the country. We imagine that there are powerful reasons for making such an ambitious plan. We love Seoul. We do not know if we love Sejong yet because our impression is unfinished. Sometimes a location without history gives you intriguing freedom!

Kim: Sejong is a new town that was forced to play host to the relocation of the major functions of Seoul with national goals of a ‘balanced territorial development’ and the ‘elimination of the overcrowding of the metropolitan area’. A new urban concept was established for the construction of a new administrative capital, and urban construction was accomplished within a short period through the participation of urban planners and architects. We made a proposal for the KMUA in Sejong, not in historic Seoul, and we expect the architectural process behind this building will be a different construction process than before. I hope that institutional and administrative organisations will allow for this innovation and authenticity, experimenting through trial and error by creating a new museum situated in Sejong.

Choi: Lastly, what impact do you hope this project will have on cities and architecture in Korea?

Zaera-Polo: We want the project to become the first architectural museum in the world, designed specifically to display architectural specimens and elements so that they become part of the building itself. We want the museum to become a global example for urban mining, and the recycling and reusing of structures, and possibly for a national experiment in this type of construction, which we believe will become normative in all continents in the future. KMUA should be at the forefront of this movement, a new avant-garde. Finally, we would like the building to commemorate the age of modern Korean development in the 1960s and 1970s, when the whole country was entirely redefined through urban development, and where the groundwork for our modern and future Korea was laid.

Kim: Beginning with the KMUA, we hope to promote voluntary participation in the reduction of carbon emission during the building construction process. We also hope that, based on this project, the criterion for building materials and procurement systems for the reuse of materials can be authoritatively established. In the reuse of many building materials and the founding of industrial infrastructure for the future, we hope that the process that we have inaugurated will be established as policy, easily attaining our goals of reducing carbon overall.​ Alejandro Zaera-Polo
Alejandro Zaera-Polo graduated from the School of Design, Harvard University. He worked for the Office for Metropolitan Architecture in Rotterdam, before establishing Foreign Office Architects (FOA) in 1993 in London. He founded AZPML as the legacy practice of FOA after its dissolution in 2011. His representative publications include The Sniper’s Log: Architectural Chronicles of Generation-X (2012) and Imminent Commons: Urban Questions for the Near Future (2017).
Kim Yukyung
Kim Yukyung, a principal at UKST Architecture, studied architecture at Hanyang University. While working at several architectural offices in Seoul, she participated in both large and small scale architectural projects of a wide range of functions and purposes. She is currently working on numerous tasks that are not limited to the field of architecture.
No.638 January 2021 Korean Museum of Urbanism and Architecture Museum Complex museum Sejong A Recycling Assemblage Competition Alejandro Zaera-Polo Kim Yukyung façade object scale
LIST
bookmark_border
favorite_border
11