Operational Aims | The voices of young architects are shared in various ways, such as forums, exhibitions, seminars, and discussions. We aim to create a healthier architectural environment by encouraging young architects to investigate societal issues and to expand their points of contact with society. 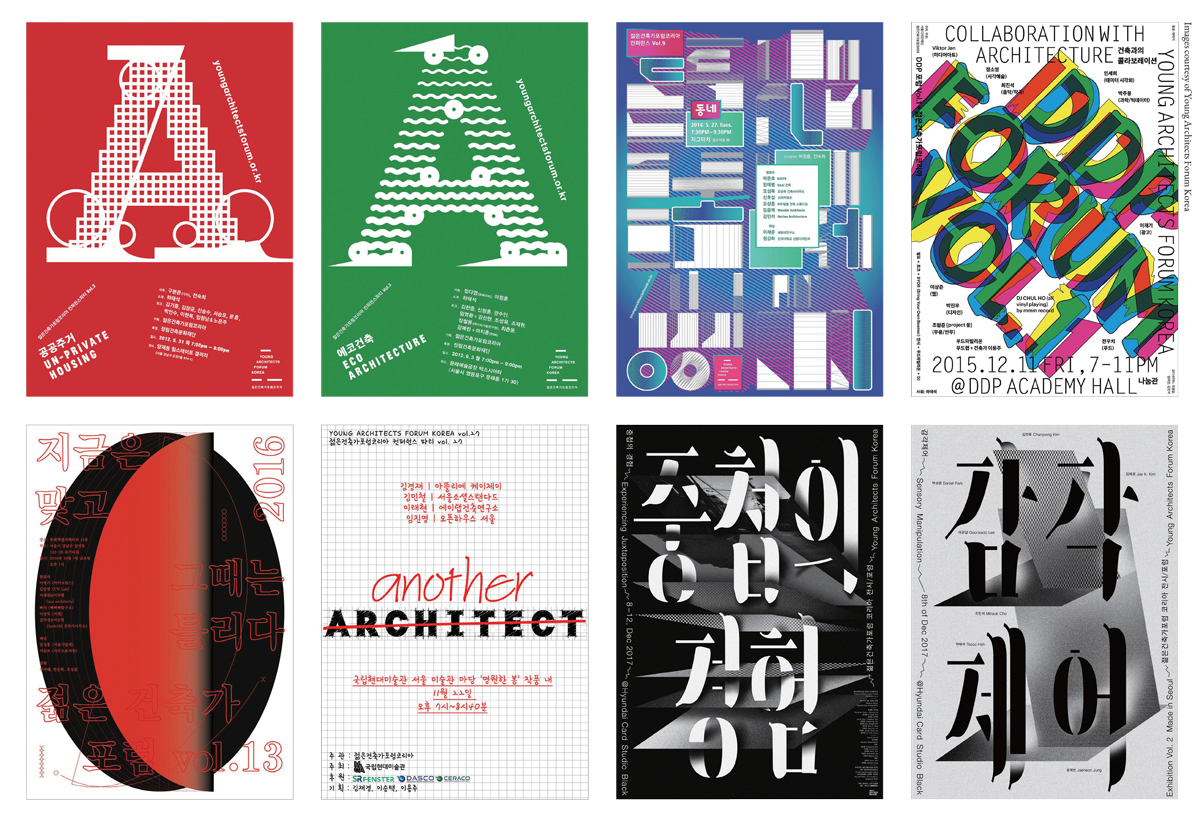 Bang Yukyung (Bang): Young Architects Forum Korea (YAF) is a free-form forum. How did it begin?

Kim Jae K. (Kim): The Young Architects Forum Korea (YAF) begain life in the late 2000s at an informal meeting between young architects. It was officially founded in December 2011. It was directed by architect Tesoc Hah, Yoo Hyunjoon (Hongik University), Jeon Sookhee (Wise Architecture), Seo Seungmo (Samuso Hyojadong), Chung Dayoung (curator), and Lim Yeojin (architectural planner). The purpose is to share our stories freely and casually. Tesoc Hah, the first chairman, was the chairman of Urban Pajama, who hosted the ‘PechaKucha Night Seoul’ in 2007. So, the initial form of the conference party is similar to that of a PechaKucha.

Bang: Tell us about how the YAF Forum operates. What kind of events do you host?

Kim: Active committee members are selected by voluntary applications or recommendations from the existing committee members. The primary selection criteria are a passion for YAF and a willingness to plan events. The operating committee members lead the planning of major events such as 'Conference Party', 'Young Architect Exhibition', and 'Conversation with Senior Architects'. We decide the theme of the Conference Party held four times a year at the beginning of the year, and select senior architects to be invited to the 'Conversation with Senior Architects'.

Bang: What is the primary value of YAF? How do you promote inter-generational bonds?

Kim: The critical value is a ‘flexibility to change’. Our goal was to induce voluntary participation and ‘to provide an ever-changing field’, so it has continued without any severe problems for a decade. Youth, as we speak of it, is not physical youth but a characteristic of a platform that changes according to the situation of the times. In order not to become a deceased person, an age limit (45 years old) was imposed on the term of office in the steering committee. Over time, the current members will be replaced and the roles will naturally pass to those in the next generation.

Bang: What is the difference between the existing groups on the architecture scene? What kind of creatives have emerged?

Kim: We limit each presentations to seven minutes, and we do not require anything special for the selection of a topic or presentation method. We don’t even try to contain the spirit of the times too forcefully; not being too serious is our main characteristic. It is not easy to define the characteristics of the people who come to the YAF in one word. Most people are involved in architecture, but this is not the case in terms of the audience. In the case of the Conference Party, it was always intended as a place of entertainment in which participants and audiences might find harmony.

Bang: What is the driving force behind the YAF? What changes are you looking for in the contactless environment triggered by COVID-19?

Kim: It is the power of a flexible organisation. YAF does not impose responsibilities and obligations on its members. There are no special rules for withdrawal. The idea of members emerging from nowhere without constraint has become a vital driving force in our operation. Besides, we have already had experience of conducting online forums through YouTube, for the past few years. With the know-how accumulated over the course of this year, we have been able to conduct the online Conference Party without difficulty.

Bang: What do you pursue in terms of sustainability as a platform?

Kim: The platform should be able to accept a wide variety of things. As mentioned earlier, the value of the forum lies in its flexibility and willingness to change with the times. A platform means a field without a hierarchy. The forum will continue to maintain this philosophy in the future. ​ 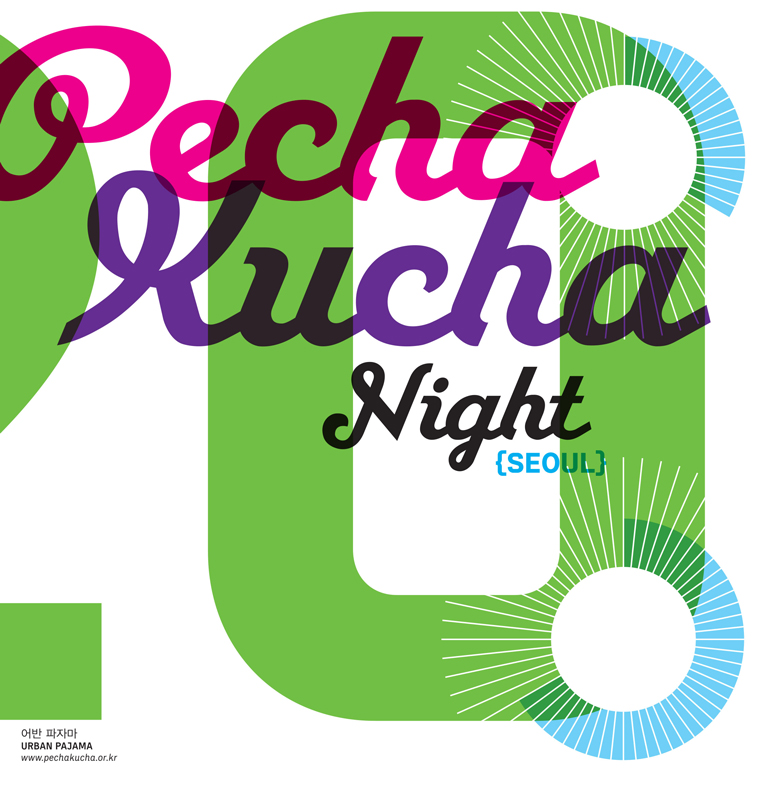 Pechakucha is an event launched in 2003 by Astrid Klein and Mark Dytham, a couple of British architects based in Tokyo, at SuperDeluxe, a bar they own. Creatives such as architects, designers, and artists all gather to present their work. According to their motto, ‘Talk less, show more’, 8 to 14 people made the presentation according to the 20X20 rule (20 slides, 20 seconds per slide). It takes 400 seconds (6 minutes and 40 seconds) per presentation, so there is no time to be bored through this intense pace. A new kind of dynamic lecture platform, coupled with the economic boom of the early 2000s, became a massive hit around the world. On 18 April 2007, the first PechaKucha Night was held in Korea with a group of creators, ‘Urban Pajama’, centred around architect Tesoc Hah. At that time, 500 people gathered voluntarily through word of mouth. Since then, the event continued with various people with creative energy such as architects, designers, reporters, photographers, and artists participated as presenters.

Pechakucha's success factors were apparent. It is because people can gather and address their intellectual demands regarding new things through fun. A presenter has to speak clearly and to the point for a limited time, but there is no constraint on the audience at all. There is no need to dress up and no reason to sit uncomfortably. One can eat, drink, or dance if they want to do so. The status of the presenter and the audience has changed. Even after the presentations are over, participants can share their opinions and interests freely in the party atmosphere.

The fading of formality towards which the Pechakucha aims could be considered a disadvantage at the same time. PechaKucha (ぺちゃくちゃ), borrowed from a Japanese word, means to chatter. It means there is no need to convey information seriously and verbally. However, we can already access the most recent and diverse information through the Internet. This format equates the speakers, attracting the participation of various people, but it also made experts reluctant to present. This is why it is difficult for a Pechakucha to become a platform for the accumulation of knowledge like a ‘TED Conference’. The party-like atmosphere also coolsed as the global economic downturn continued, and it is not a suitable format in the present global health crisis.

In the sense that the audience and the speaker, and the speaker and speaker have a horizontal relationship, a Pechakucha is the most suitable presentation format for the lexical meaning of the platform. Hah Tesoc, chairman of the first ‘PechaKucha Night Seoul’ in 2007, started the Young Architects Forum Korea four years later with several architects and planners. Their goal was to create a new field that would complement the shortcomings of a PechaKucha. PechaKucha accepted the situation in Korea and transformed it into a new platform. As such, a platform that pursues informality will continue to to be flexible about its form in light of various cultures and local conditions.

Jae K. Kim
Jae K. Kim is a Professor of architecture at Hanyang University and a principal at JK-AR. He is the 4th Chair of the Young Architects Forum Korea. Jae received the KIA (Korean Institute of Architects) Special Prize and the Grand Prize from Korean Wooden Design Awards in 2019. He is also a recipient of a Special Mention in the Architizer A+ Awards 2020.
LIST
bookmark_border
favorite_border
8