From Waiting to Preparing

Under the auspices of the Ministry of National Defense, I visited Camp Long located in Taejang-dong, Wonju-si in Gangwon-do on the 17th of February, 2020. Behind the creaky iron gates, The empty grounds closed off by creaky iron gates reminded me of a desolate off-season beach. Camp Long was a United States Army base founded in 1955 and named after Charles R. Long, a US Army soldier who received a medal for his service and actions during the Korean War. In 2010, all US force bases were moved to Pyeongtaek, Gyeonggi-do, after which this base was left vacant. Camp Long was originally set to be returned to Korea in 2008, as according to the Land Partnership Plan (LPP)¹, but the handover was delayed for over a decade and finally completed on the 11th of December 2019. It looks like it will be a while before the grounds are opened to the public, as the contaminated land and soil first has to be restored. Exactly ten days after my first visit, I returned to the base for a field investigation with the Mayor of Wonju, city staff from related departments, and members of the Ministry of National Defense. It was determined that, instead of adopting the previous plan to preserve only a few of the buildings to prioritise the creation of a cultural and sports park, the majority of the base’s buildings would be maintained and future plans for the space would be decided through a public event that would involve the involvement and participation of local citizens. As the new proposal materialised, I took on the role of director, and the event took shape as an exhibition and performance entitled ‘CAMP 2020: Contemporary Arts & Mutational Plans (CAMP 2020)’. Just as a camp denotes a place of temporary accommodation, as a place previously occupied by the US Army forces, it would now belong to the citizens of Wonju and the Republic of Korea. However, we do not know of the precise purpose and aims of this place as yet, which is why a project that aims to determine its most appropriate use has been suggested prior to its full return to the local residents. Although we had less than three months to prepare the project, we felt it was a necessary to answer the questions posed by those who will ultimately own this cultural and artistic space, and to come to better understand both the history of this site and its potential contemporary role through art. We were convinced these were enquiries that were sure to evolve over time. 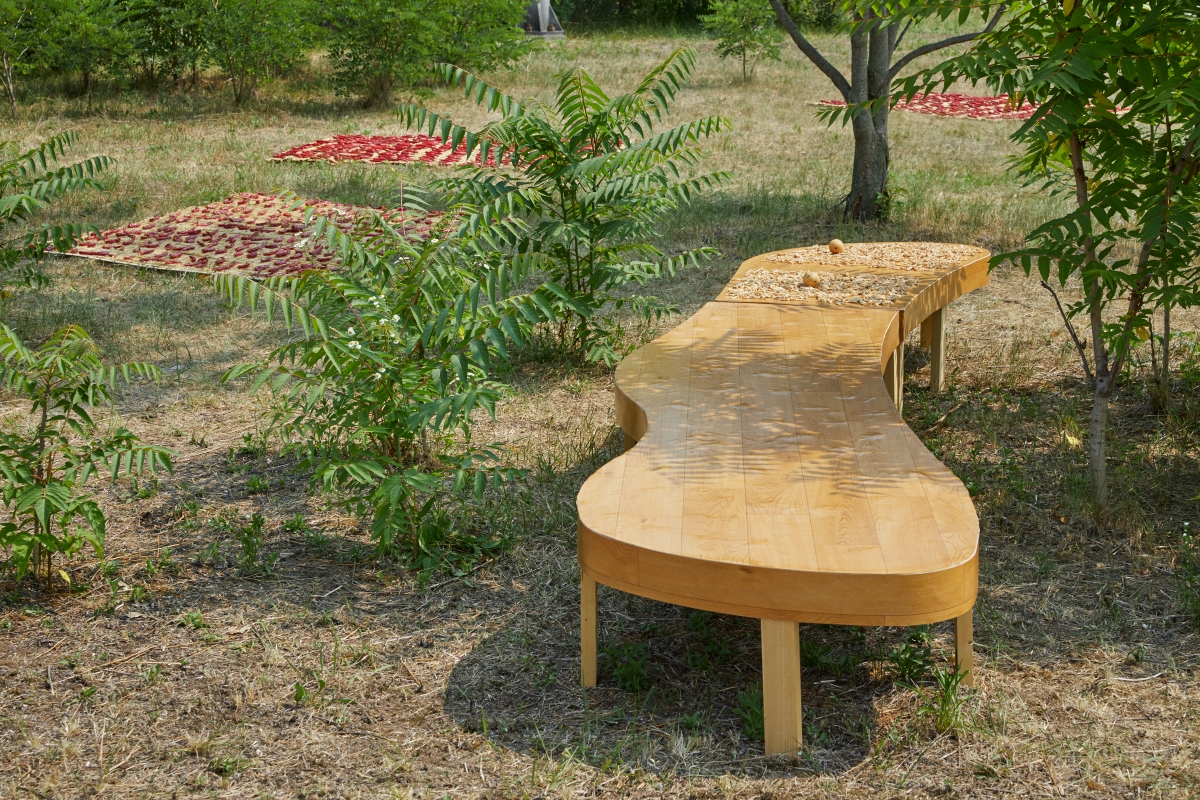 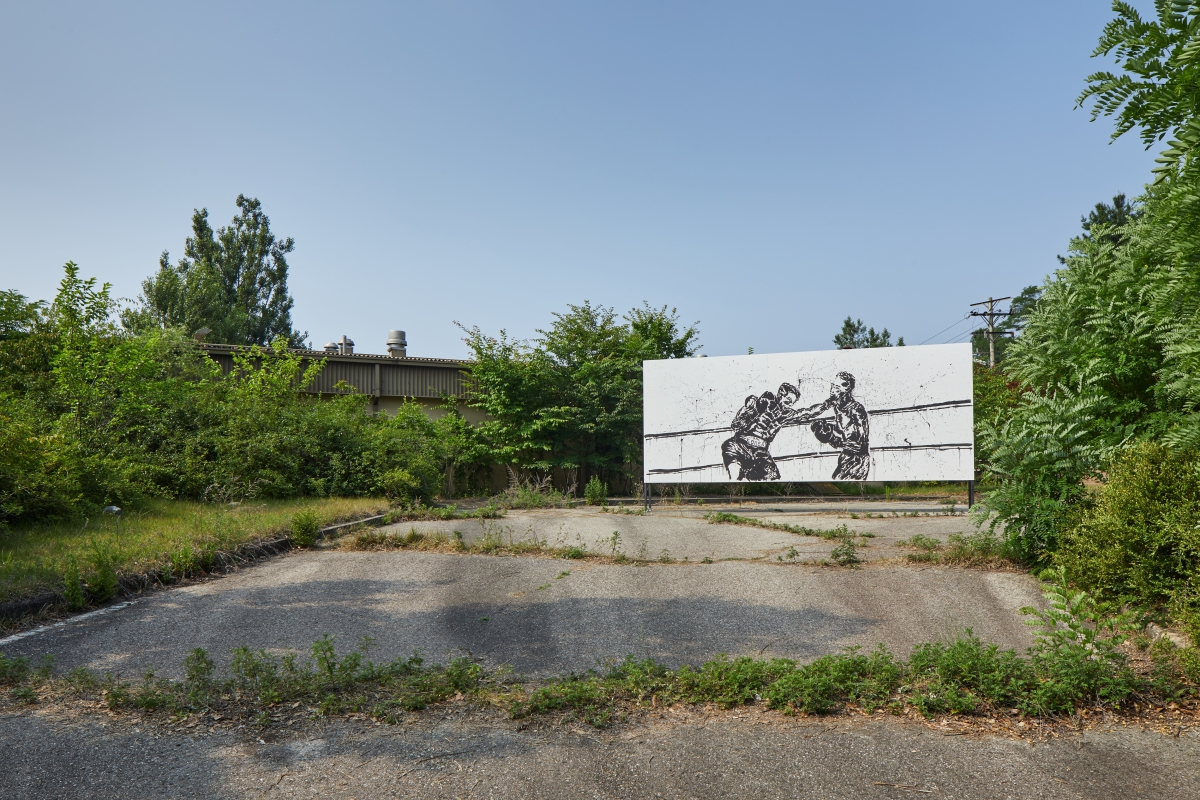 CAMP 2020’s exhibition was comprised of a ‘Commission Project’ by 5 teams of 17 artists including Kim Gemini, Lee Wan, Chung Soyoung, and another project entitled ‘Hyundai Unit 1: Where to Raise’. The former includes works that scrutinise the backdrop of the US Army base. In their collaboration, Kim Gemini and Chung Isak placed a low wooden platform between a thicket of mulberry trees in the softball field, around which they set dried radish and peppers to dry. It served as a reminder that even in the midst of this land shrouded in mystery for the past seventy years, at least for the seven days during which the base is open to visitors a familiar slice of pastoral bliss can be found. The architectural duo, Diagonal Thoughts (Kim Sara, Kang Sojin), contemplated landscape created from and returned to nature, which might legitimately be titled the real owners of the land. Their work calls upon the names of the local flora, and suggests that there were other occupants here besides the US Armed Forces. Chung Soyoung was inspired by the pine leaves and pine cones that greeted her from inside the church gates on her first visit to the base. The stray fallen leaves let in on the few occasions that the church doors were opened by infrequent visitors since the Americans left ten years ago influenced this piece, and Chung has designed her sculpture to replicate their natural fluttering movement. Other displays capture the perception of these millennial artists of the US Forces and their base camps. In their project, the team ‘Captain America, sweet specters, and 9 strangers’ (Lee Wan, Margot Kim, Mandy Lee, Shin Hocheol, Yang Geunbae, Lee Soyoon, Jeong Yeoreum, Jo Won, Han Heejo) celebrate the departure of the spirits of the former military camp, and examine the location’s role. With fledgling artists taken under his wing, Lee Wan positioned American comic book figures across the various corners of the base. The main character, Captain America, which has been redesigned with an outsized head much bigger than his body, was placed in the centre of an outdoor swimming pool, and appears to evoke the bittersweet history between South Korea and the US. Shin Hocheol floated fragments of a broken crate made of paper mache. An artistic trio (Yoo Naul, Yaru, Song Wonyoung), Dayspring focused their efforts on the bowling alley and on conjuring the quotidian details of life in the base prior to its transfer to South Korea. The section titled ‘Hyundai Unit 1: Where to Raise’ is the combination of old and new works, and is concerned not only with the immediate surroundings of the military base but the grander narrative of Korea’s contemporary history. The title of their work alludes to the act of decorating a newly opened apartment complex. Just as people furnish their homes with memories from their own lives, eleven artists approached this project as a means of memorialising memorable moments throughout history. Choi Daejin installed Last Chance (2020) in front of the outdoor area of the office of the medical corps, which looks at a boxing game that took place in Osaka, Japan in 2000, when Cho Injoo of South Korea played against Hong Changsoo (Masamori Tokuyama), a member of the pro-North group, Korean General Association of Korean Residents in Japan. As in Lee Jeonghyeong’s work which uses string, Korean space and time has been perpetually at odds with the dynamic, endlessly evolving boundaries characteristic of nature. What little movements that could be made or captured are stiff and interrupted, as in the paused frames of the footage from a close-order drill. The artists in this section seem more resigned to this harsh reality, permitting only a monochromatic view of the world. 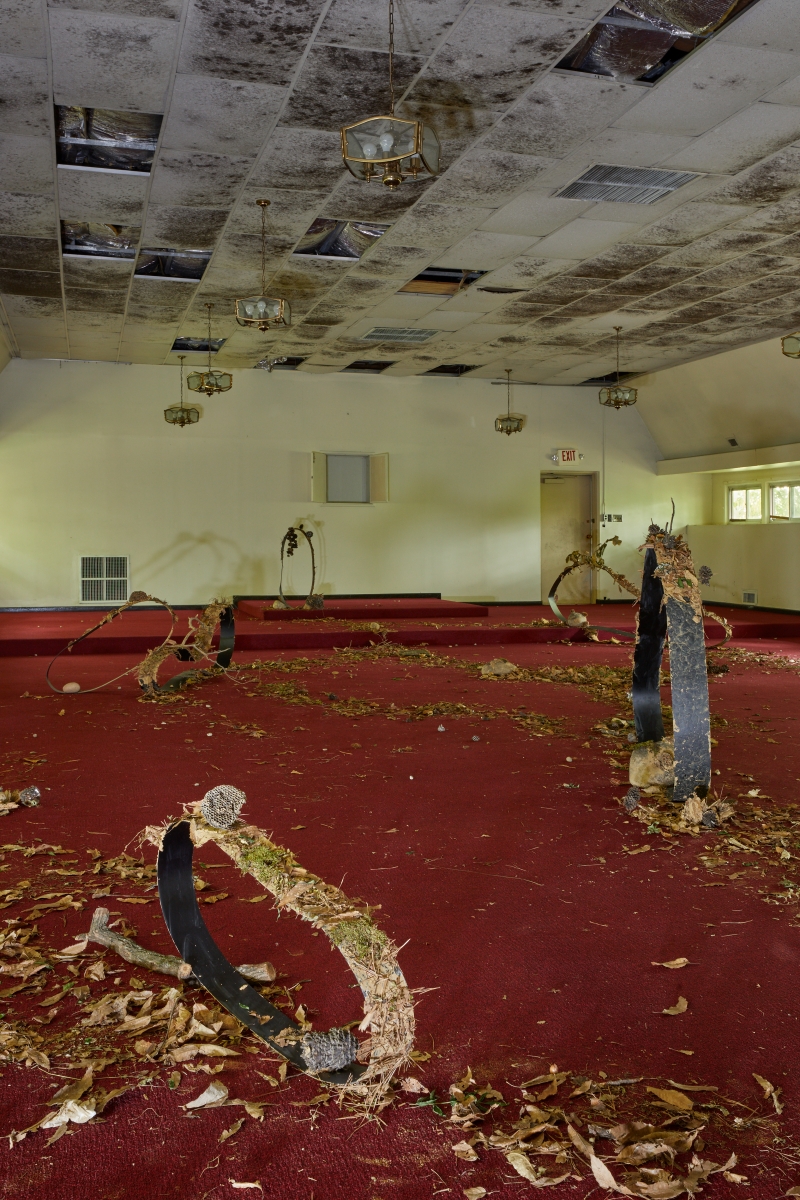 In the limited available preparation time of two months, numerous opinions, both positive and negative, were thrown at us. With the artistic and architectural sphere usually loath to criticism, it is relatively rare to hear overt flak, but during the exhibition I had a fellow artist send me a screenshot of a social media post. It was the criticism of a US army base researcher which suggested that the show didn’t give sufficient explanation of the history of the base, coupled with an art critic’s skeptical response to a show that followed the conventions of a typical exhibition to explore a location that had to address its traumatic history before undergoing a great transformation. Both were legitimate points to consider for CAMP 2020. However, I am critical of the conventional long historical explanations that greet visitors at the entrance to shows. I personally admire the way the drums rumble at 6pm at Daeungjeon Building of Sudeoksa Temple. It signals the end of the day and notifies the tourists who leave the grounds to be replaced by monks who light the halls with candles that they are participating in the history of the buildings. The informative panel aimed at visitors, however, shatters this sensation. It taxidermies the living experience of the Temple. I take issue with the Korean proverb, ‘you know as much as you’ve learned’. In fact, it often proves more illuminating to approach an issue with a blank slate. I felt this is true all the more true for visitors who’ve just set foot in off-bounds territory, whom I didn’t want to subject to a history lesson. What I wanted for visitors, first and foremost, was for them to walk the grounds and think for themselves. To read and to see are different experiences. I wanted people to tour the area without prejudice or hesitation, and for them not to feel the artists and their works as too pedantic or difficult. I would prefer viewers to be struck by an ‘Aha!’ moment related to these works ten years down the line, than to impose lengthy, tedious expositions upon them. It could be that people only understand our approach as design arrangements. Let them watch the berries hanging from mulberry trees, hear the rhythmic drilling of woodpeckers, and feel the cool breeze blowing through the halls of the medical building. If our work can assist in that experience, it is good enough. Unlike the assumption made by the art critic in their social media post, Camp Long is not set to undergo an extensive renovation. More accurately, that was once the intention but it is no longer the plan. When I saw the initial announcement in February that detailed how the base would be turned into a sports park, I despaired at the hubris motivating those designated as contractor to propose such changes without even setting foot on the grounds. After the Mayor of Wonju’s visit, however, and the evaluations of many experts, the plan was adjusted to retain most of the existing building. Since the opening ceremony held on the 19th of June, the structures within Camp Long have been set for a series of individual renovations. This is not an approach that intends to honour and celebrate the military base as it was—it is worth noting that one important option was not even considered before the plans were made known to a key decision maker. Those without imagination are not at fault here. It is, however, the responsibility of those who have the imaginative powers to conceive of alternative realities to speak up. Even though some may see the current show as just another tune sung from the conventional exhibition playbook, if it can be done in the direction of greater potential for the location then I trust that is the right way to move forward. More important than form is content, and the sincerity with which its many programmes are presented. Marilyn Monroe is known to have said in her final days that her life resembled an off-season beach. For the US Armed Forces, Camp Long may be a closed beach, but for the citizens of Wonju, the base is one that has yet to be opened. It’s an early June beach, which has just had its sand freshly maintained, where the peddlers are starting to gather, and stores are opening with their assortment of menus and goods. Until now, Camp Long has been an off limits, uncharted territory for Koreans, one that retains some of the more traumatic episodes in recent history. Whether that history is one to celebrate or regret, or even possibly one that we would rather erase, it is ours nonetheless. This location marks time that is indelibly our own—the path we have walked and continue to walk to this day. Just as it is necessary to reckon with one’s past to understand one’s present, we cannot make progress or discover our future by denying or expunging history. 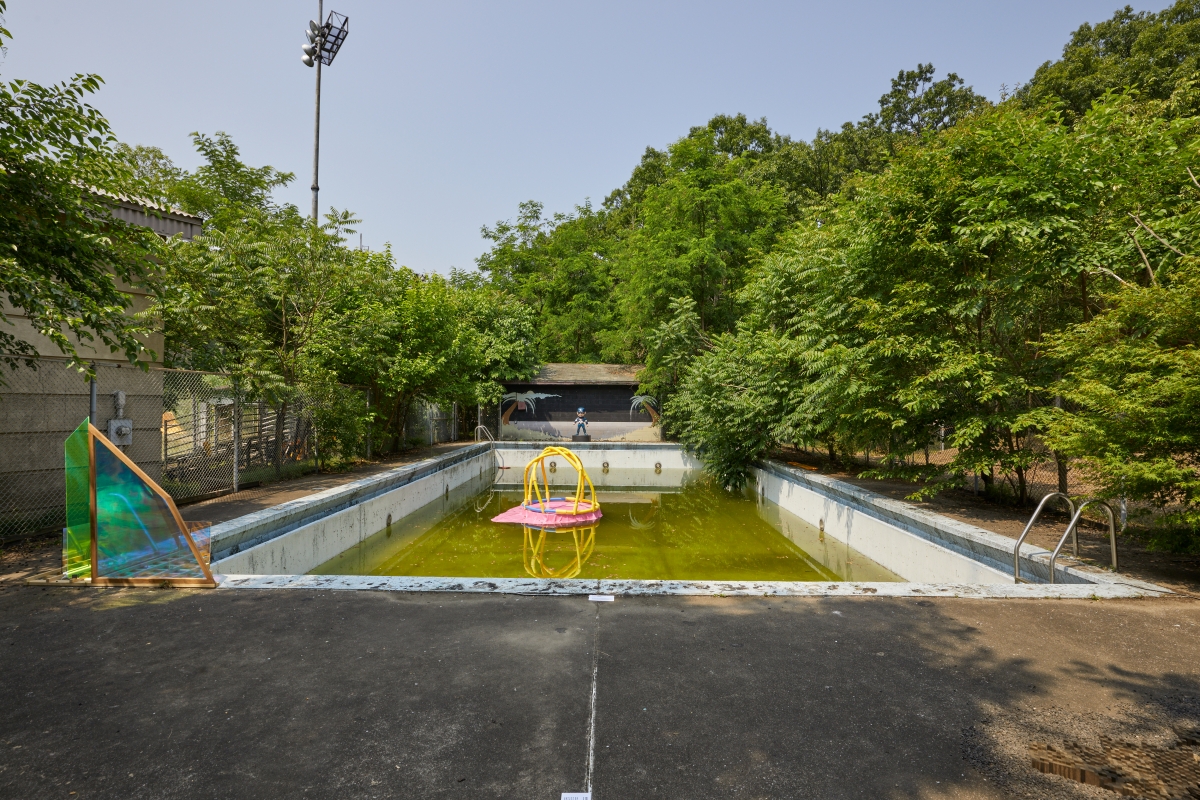 1. Announced on the 29th of March, 2002, and effective since the 31st of October, 2002, it is the plan by the United States Forces to return 28 military bases and three training grounds to the Korean government by 2011.