Vertical Opening and Horizontal Unfolding
Located in the Buseok-myeon of Seosan-si in the Chungcheongnam-do, sits a site that was once known as the Buseok Church. Scripture teaches us to store our boseok (or, treasures in English) in heaven as if they were precious stones, rather than gathering treasures of gold and silver – namely, the accumulation of capital – here on earth. What this means is that we should not selfishly increase our own fortune only for ourselves and for our kin, but lead a worthy life that makes the heavens rejoice: we should store up boseok―treasures in heaven through selfless sacrifice and by sharing the most precious things in life with our neighbours. A simple chapel located on a small road that leads from the city of Seosan to the coast of Anmyeondo Island has been renamed the Haneul Boseok Church (Heavenly Gem Church) to give an architectural connotation to this meaning. Through an abstract image, the Heavenly Gem Church recovers the symbolism of buildings and the meaning of place, which were the primary elements abandoned in church architecture following the emergence of modern functionalism. These more symbolic meanings were sought out and created one by one, adding a sense of delight to the process. 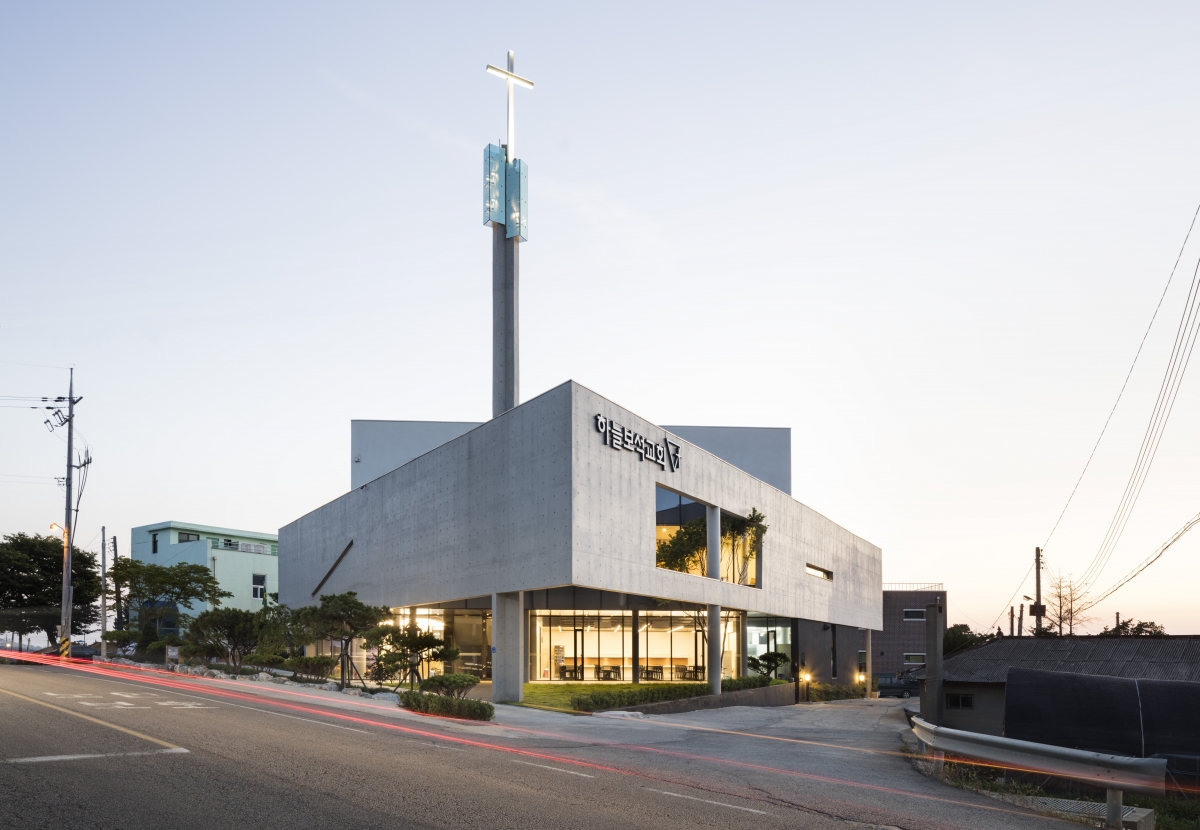 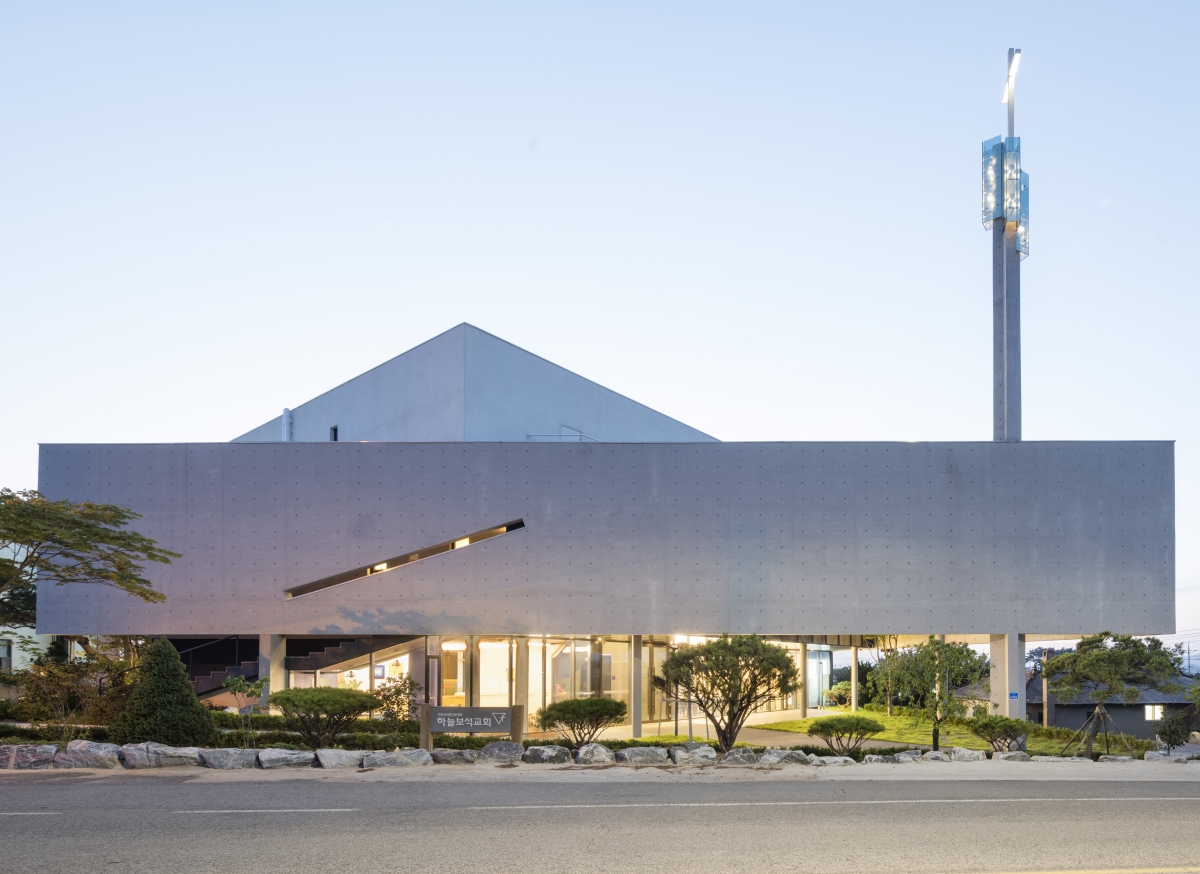 Vertical Form and a Love of Heaven

The invigorating symbol, in part presented by the name Heavenly Gem Church, became the main concept for a project that was used for the interpretation of an architectural structure. First, an empty triangular volume was created within the building to frame the blue sky in order to capture the symbol of the Trinity, which signifies heaven. Moreover, the consecrated space for the lifting of prayers and worship sits within a rectangular mass that represents the earth; the circulation was stitched together using a rounded corridor that wraps around the chapel. Through the insertion of the chapel’s elliptical volume, within this ring-shaped circulation, a separation between ‘served space’ and ‘servant space’ is created, allowing circulation to effectively fulfill a connective function between the domain of the sacred and secular. The meaning of storing up treasures in heaven is not so that they can be regained in the afterlife, but a metaphoric expression of a faith that stores value in heaven by doing good deeds on earth. Lying within the empty triangular space, the vertical steeple reaching towards the heavens and the central volume with its shimmering glass fenestration, one embraces the aforementioned symbolic value. In addition, the volume of the raised triangular-shaped exposed concrete wall not only opens towards the heavens, but simultaneously opens at the ground level, embodying the fundamental value of a church that exists for neighbours through this abstract manoeuvre. 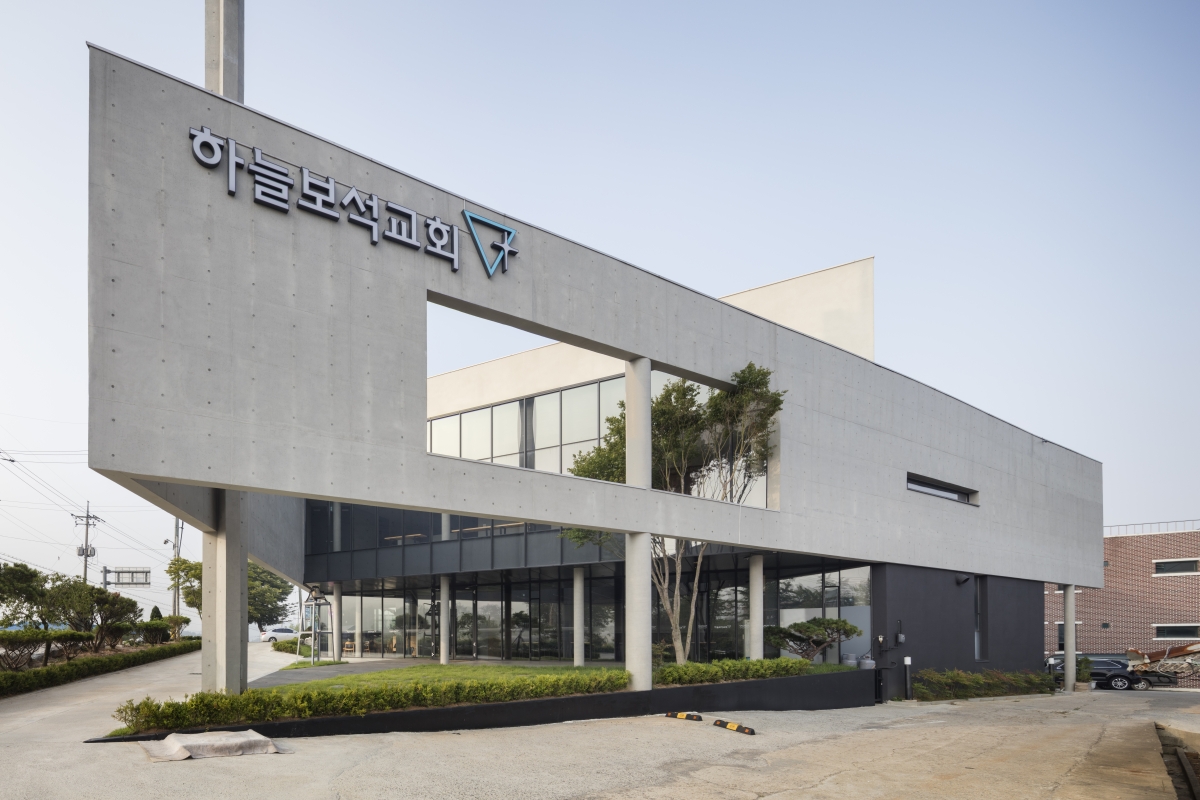 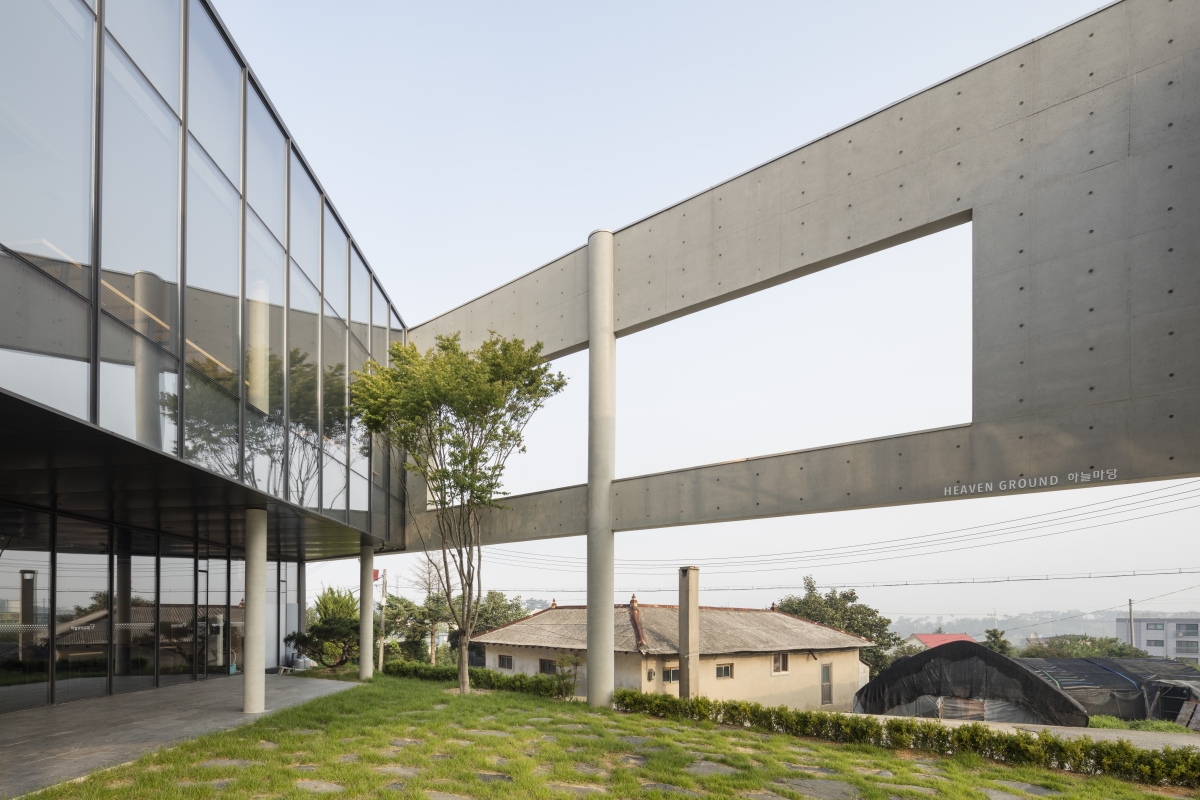 A Horizontal Form and a Love of Neighbours

As one ascends and descends the chapel space, one’s gaze is not taken off the placid, horizontal value of nature and neighbor: devices which continuously draw the panoramic view of the vicinity into the church, placed around the building for the purpose of meditation. This is because I thought that an attitude to life which displays compassion for neighbours and continued affection for nature corresponds with the establishment of the sincere values of heaven. I don’t know whether this is just a coincidence, but the adjacent roads and even the shape of the site very much resembled a triangle, allowing a triangular void space to be placed above the triangular site. In addition, the building’s interior road which acts like a central hall that connects the neighbouring village health centre and community hall yard, allows the Heavenly Gem Church to form an active relationship with its surrounding neighbours; it is a practical and pleasant cultural space which expresses the public will and aims to be used together with the church’s community. Centred along this interior road are a cafeteria, café, administrative facilities, and seminar rooms, which can be enjoyed together with local people; it was not a coincidence that they were placed along this line. 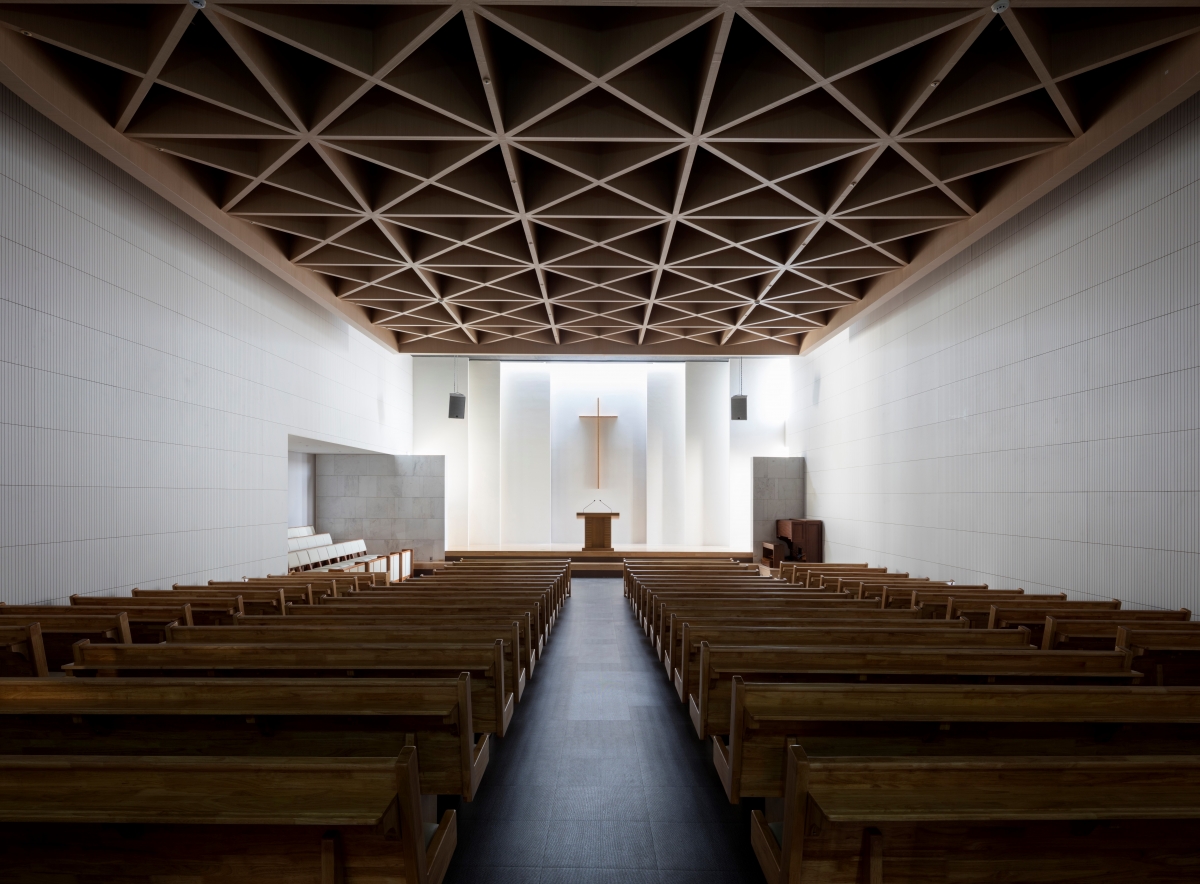 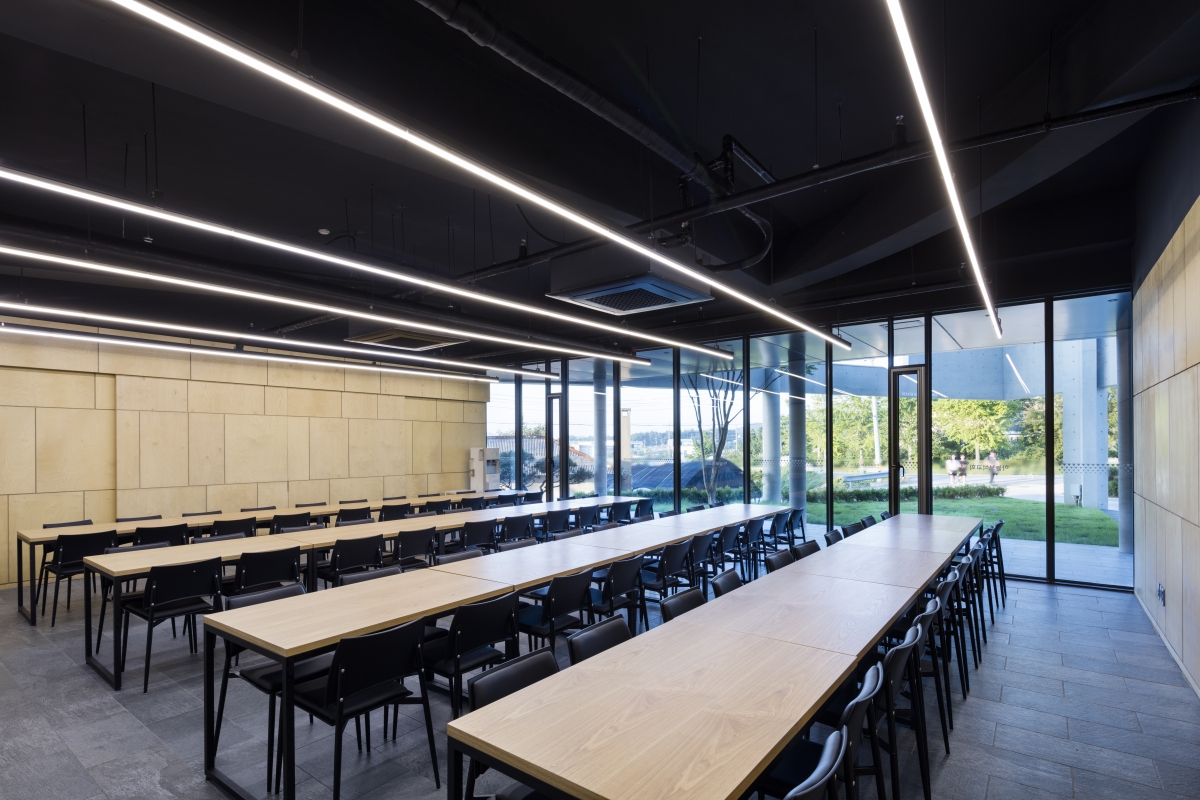 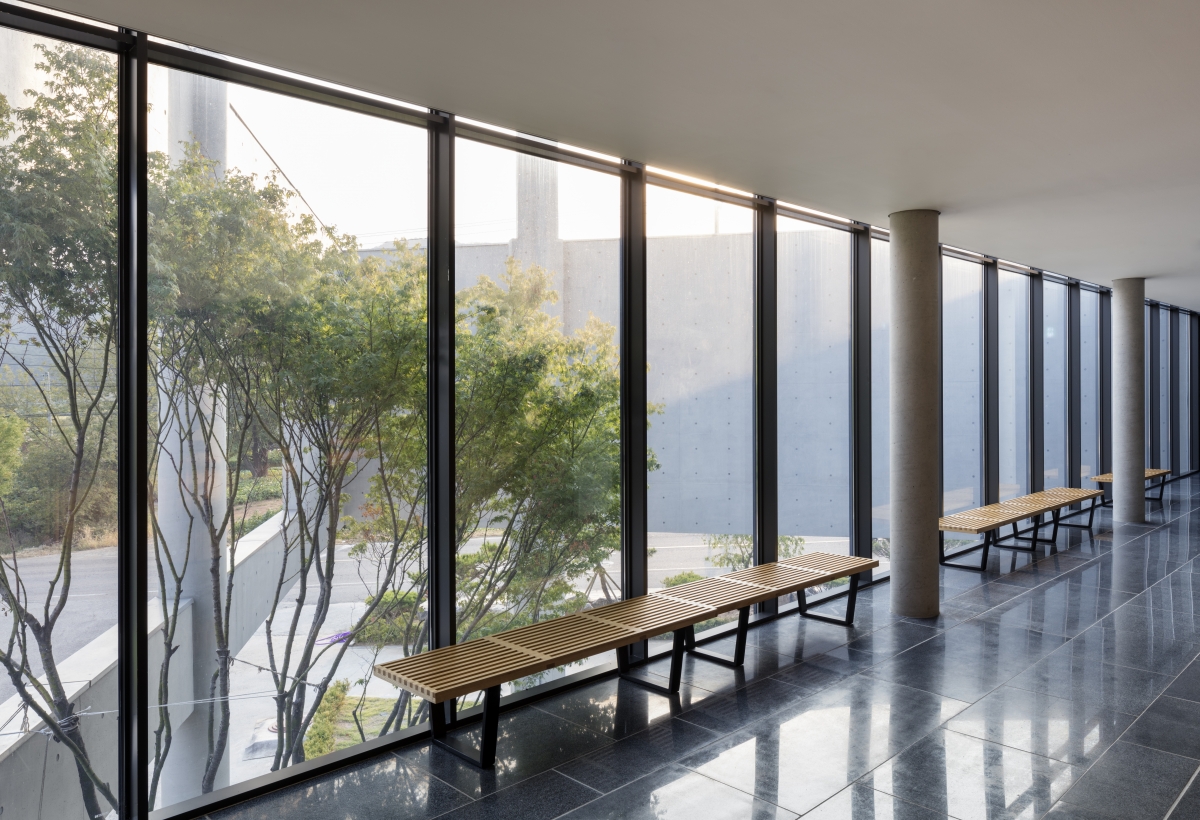 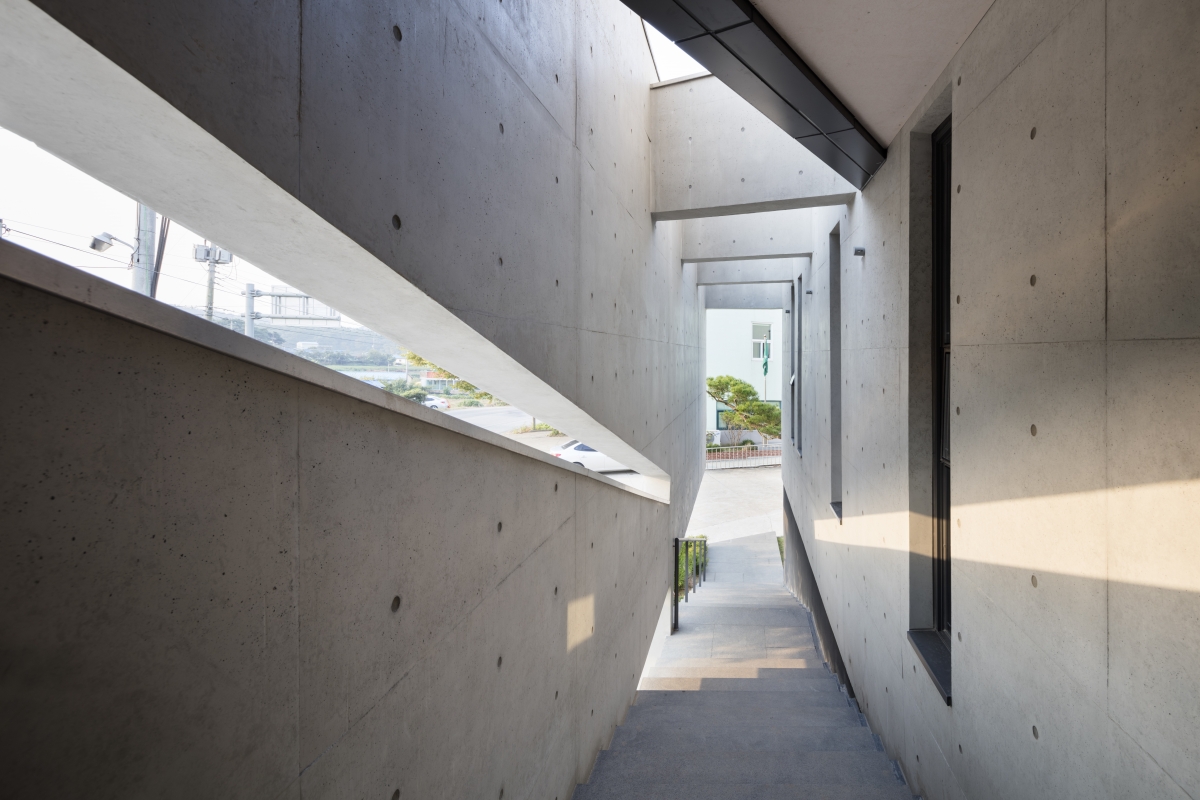 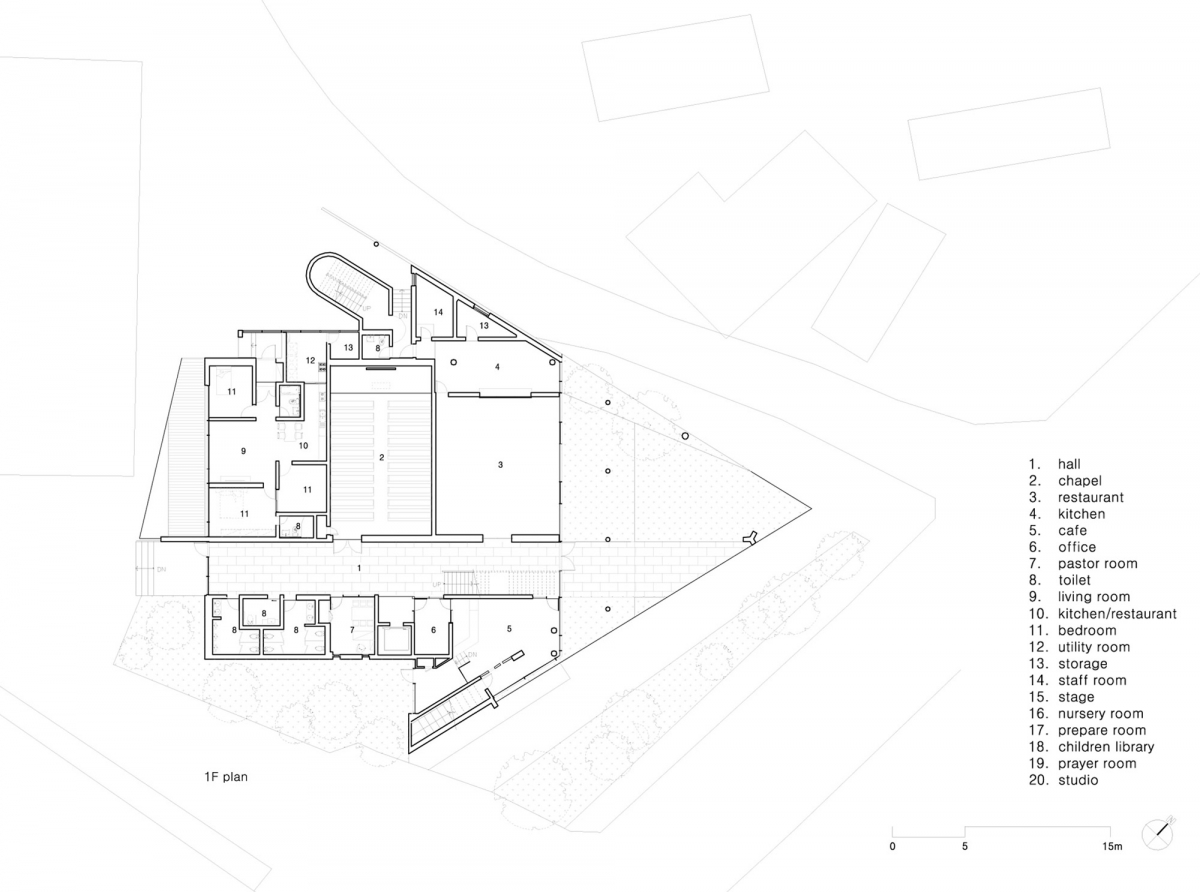 Lee Eunseok
Lee Eunseok graduated from the architecture department of Hongik University and the Université Paris 1 Panthéon-Sorbonne, acquiring a doctorate degree in the arts. He studied under Henri Ciriani at the Ecole d'Architecture Paris-Belleville, and acquired the DPLG. He has served as a Professor at the department of architecture at Kyunghee University from 1997 to present, and as the head of the Architecture Design Institute of Korea from 2016 to 2018.
Since establishing the Atelier KOMA (Korea Office of Modern Architecture) in 1996, his signature projects include a variety of churches including the Saemunan Church, Bujeon Glocal Vision Center, Pomo Church, KyungSan Church, World Vision Church, Neul Sem Church and the Heavenly Gem Church. He has completed a variety of projects and awarded many architectural awards for cultural facilities such as the Son Yangwon Memorial Museum, Tap Jung Luce, Vin Rouge and UJeonGa, residential facilities such as Lyann House and the Sejong City Detached Housing Lot, educational facilities such as the Chongshin University Scroll Building, the Geumsung Kindergarten, Dream School, and commercial facilities such as Hotel Entra.
SPACE BOOKS ARCHITECTURE ARCHITECT LEE EUNSEOK ATELIER KOMA CHURCH Heavenly Gem Church Vertical Opening Horizontal Unfolding
LIST
bookmark_border
favorite_border
17