The Holy Light Church, which opens out towards the city, was orchestrated along a continuous corridor through the church square from the main avenue, across the lobby hall, and to the neighbouring park facing the rear of the church. The lobby is a public open-air indoor plaza and an accessible hall intended for children’s activities. The hall is open to its surroundings along the horizontal axis, taking energy from the city, and the church provides the neighbourhood with a bright and open space. As a modern church is a complex facility in which many members will worship, organise community meetings, and host various gatherings, it is necessary to provide effective spaces and a dynamic flow system, particularly for a situation in which different spaces are stacked on a narrow site and in which an underground space is used as a worship room. Therefore, the Holy Light Church, located in the downtown area of the city of Dunsan, Daejeon, consists of the following three parts: 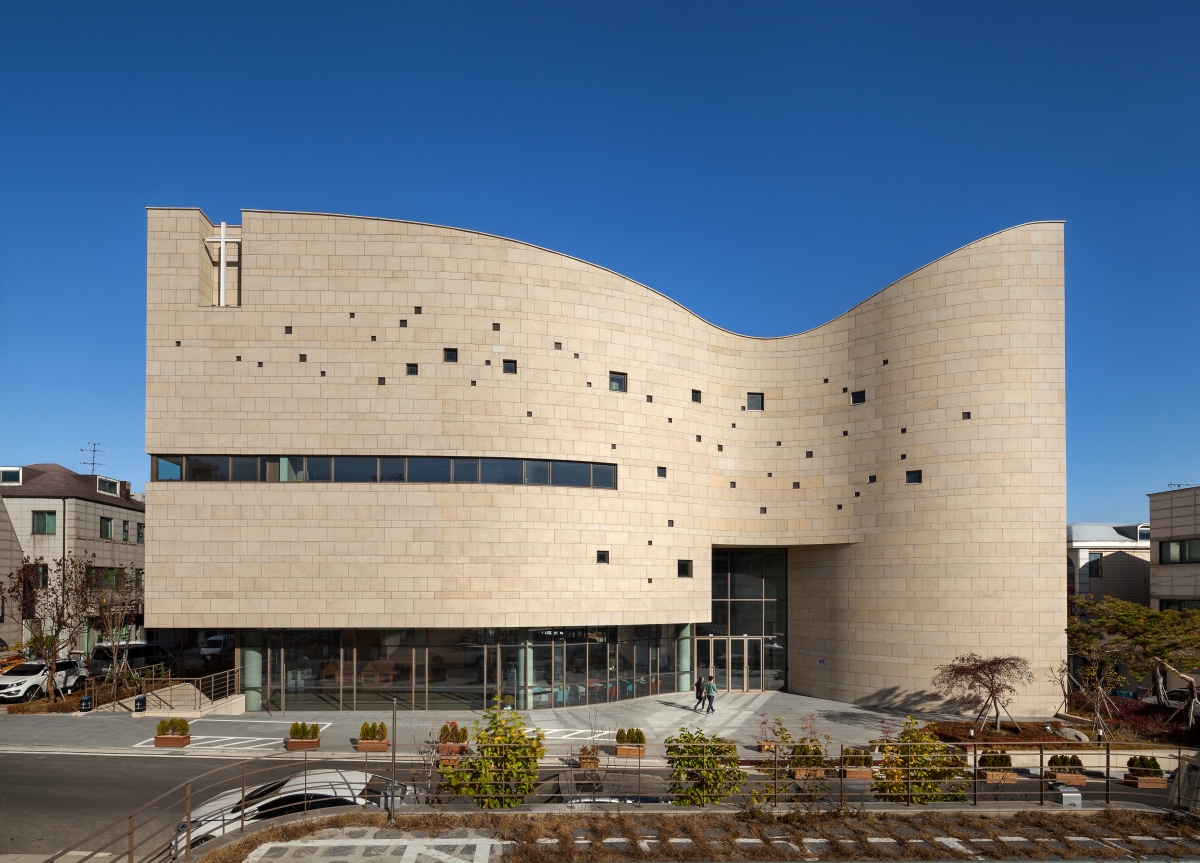 Outdoor Square and a Soft Façade

The Holy Light Church has dedicated the area along road at the front of the building to an underground parking lot. The roof top of the parking lot can be used as an outdoor parking lot in case of an emergency, but it is usually used as an open multipurpose space, much like a square in front of a church in Europe. The Cross Tower and the corridor are landmarks in the city and the back of the church can be recognized from the road. In conjunction with the surrounding buildings, they limit and define themselves at the same time. The depressed curved wall on the façade of the church functions not only as a decorative feature but also as a wall that characterises the interior and the exterior of the church. It is a core concept behind the design of the church, which welcomes neighbours and encompasses both the square and the city, The church desired this to be a metaphorical example of a gentle Christian life. This façade is the first impression given by the Holy Light Church and becomes a luminous body of colourful changing light, reflecting the name of the church. 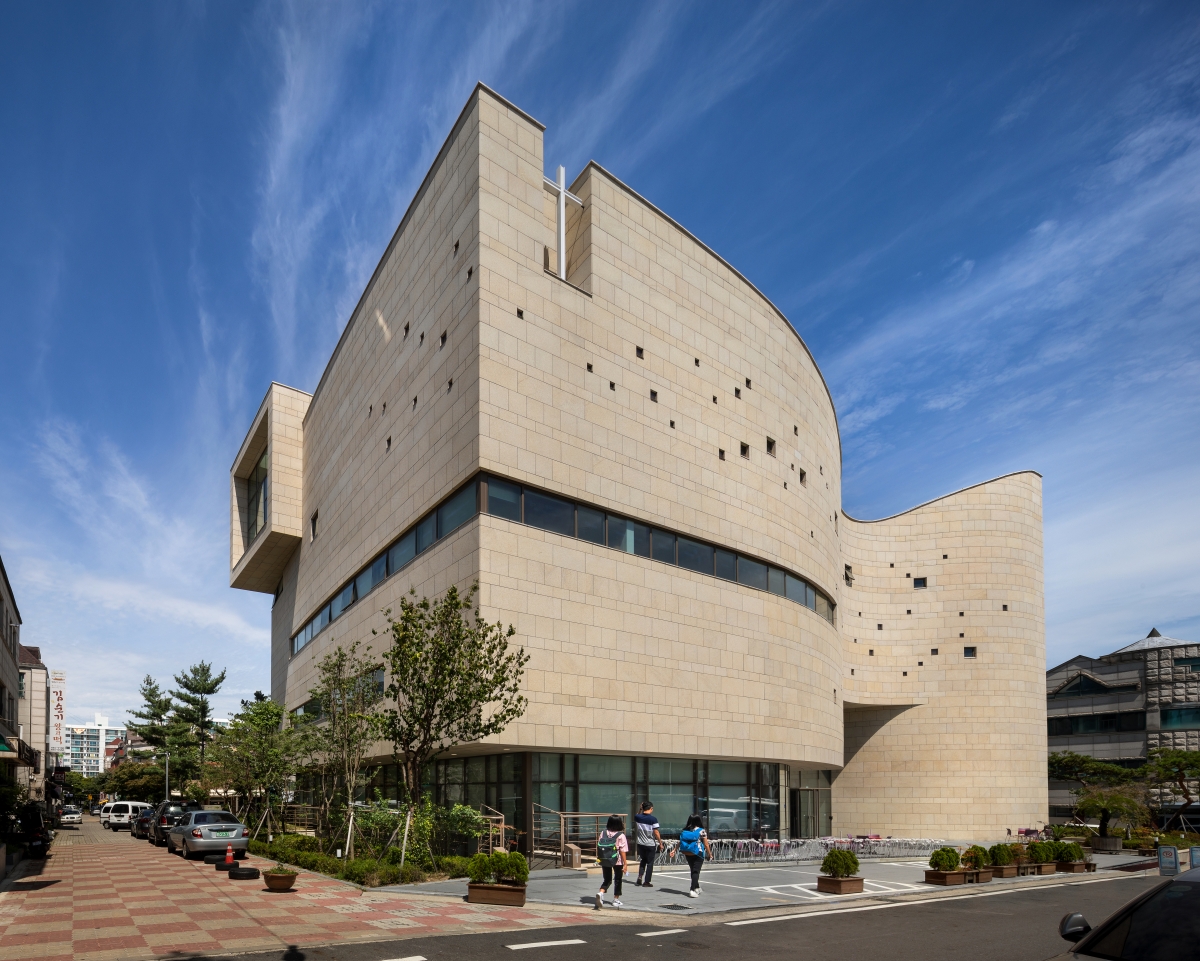 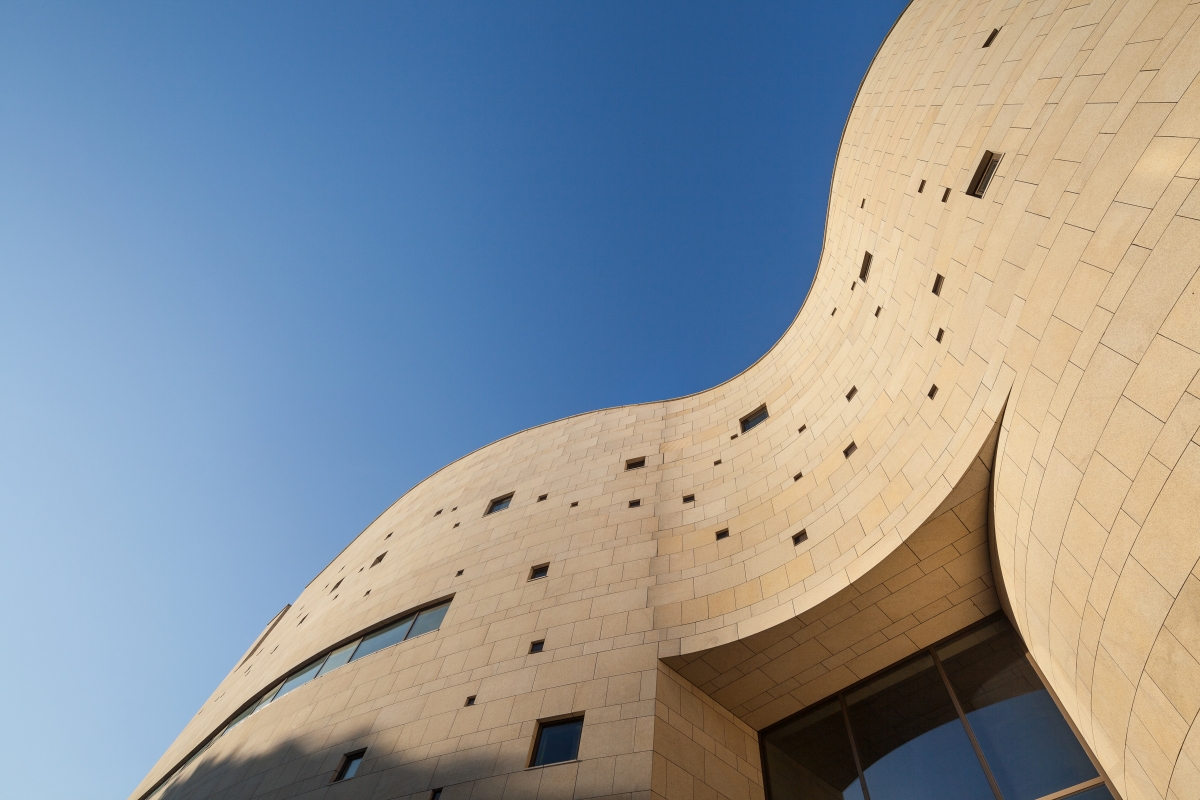 A Pleasant and Harmonious Space for Worship

The underground worship room contains the maximum number of seats for the given site. Also, in planning the worship room without balcony seats is intentional in order to create a space to help build the community. The underground worship room is spacious and easy to access directly from the outside through a sunken garden instead of through the lobby hall. The underground worship space is protected from urban noise, so it is quiet. Also, the funnel-shaped underground lobby hall has become a pleasant and bright space due to the light of stained glass windows. In addition, the plan for the semicircular seats in the main chapel and a pulpit lower than the stall reduces the feeling of religious authority. This layout also supports the clear delivery of sermons and maintains a harmony among members. ​ 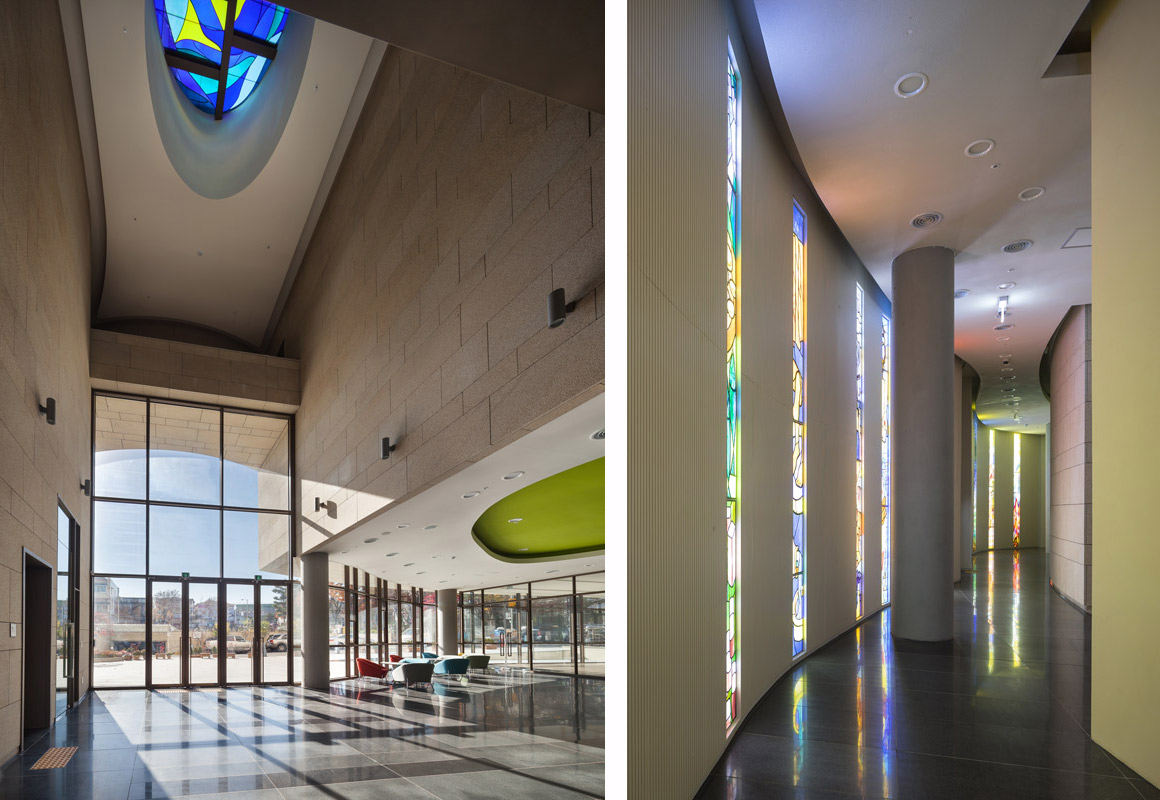 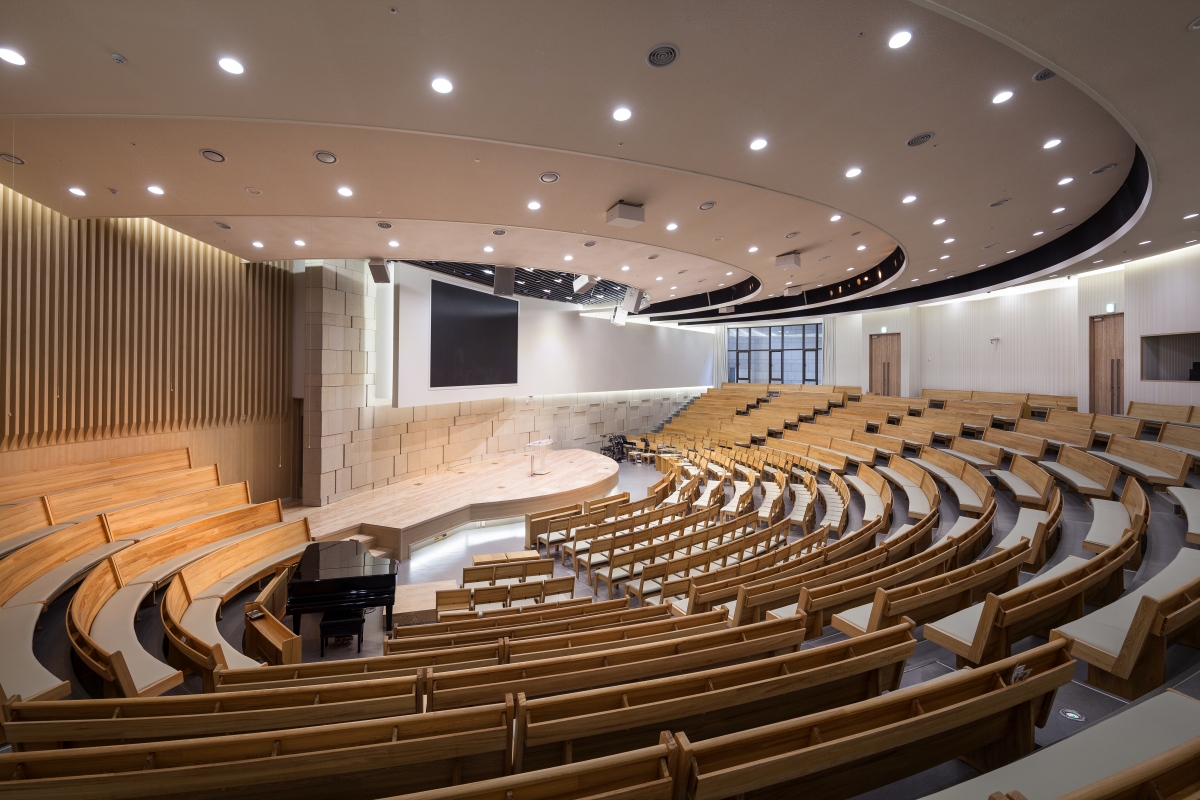 Inside the Hall, Square and Educational Space
The hall on the first floor was planned to be a public space that citizens could access easily because its façade faces the outdoor square and park adjacent to the church at the rear. There are rooms for education and for the administrative staff for infants and young children, and they also function as a cafe. Most of the educational space is located on the upper level. This arrangement provides a bright and cool view, which is open in all directions so that it creates an effective educational environment for future generations. It is easy to enter and exit this portion of the building and younger members can enjoy the multipurpose hall and the rooftop garden. 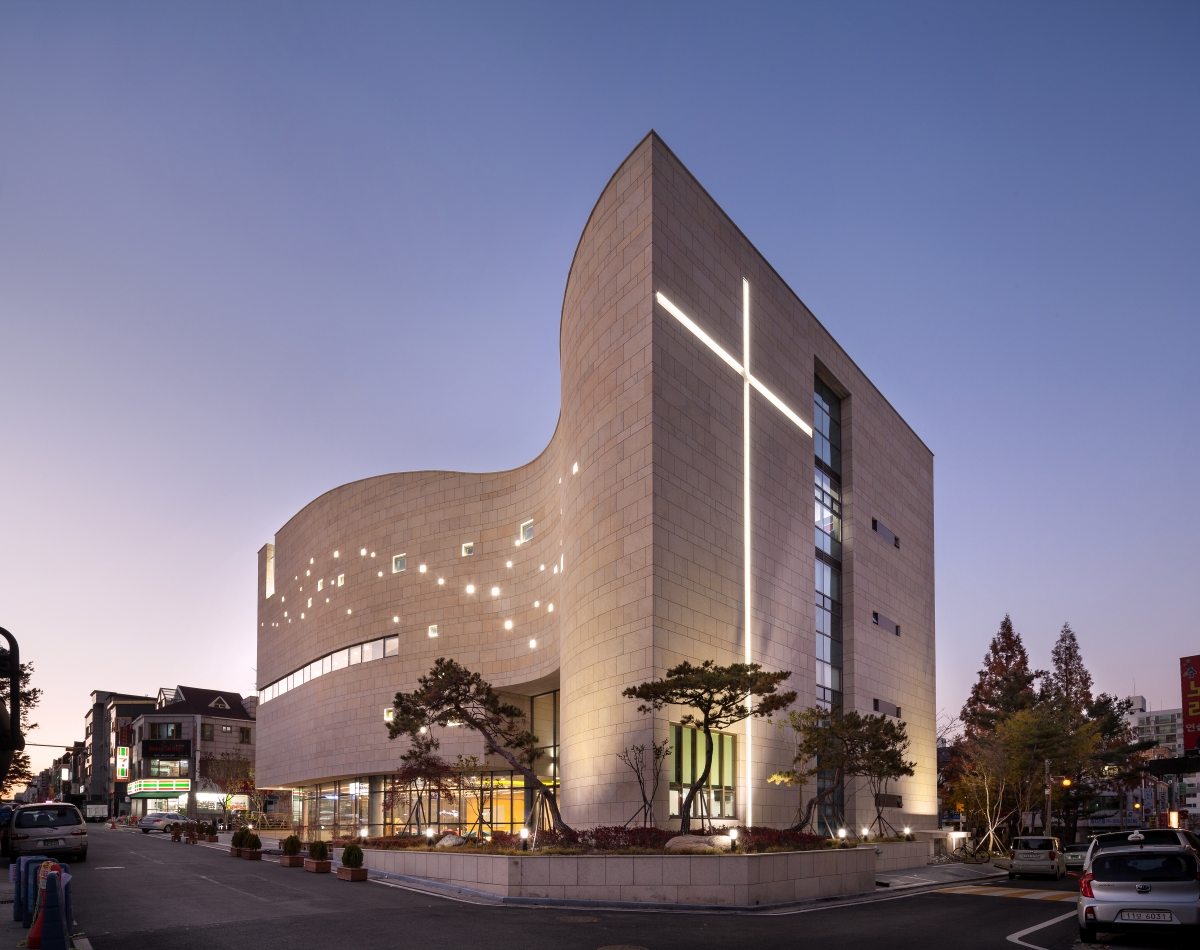 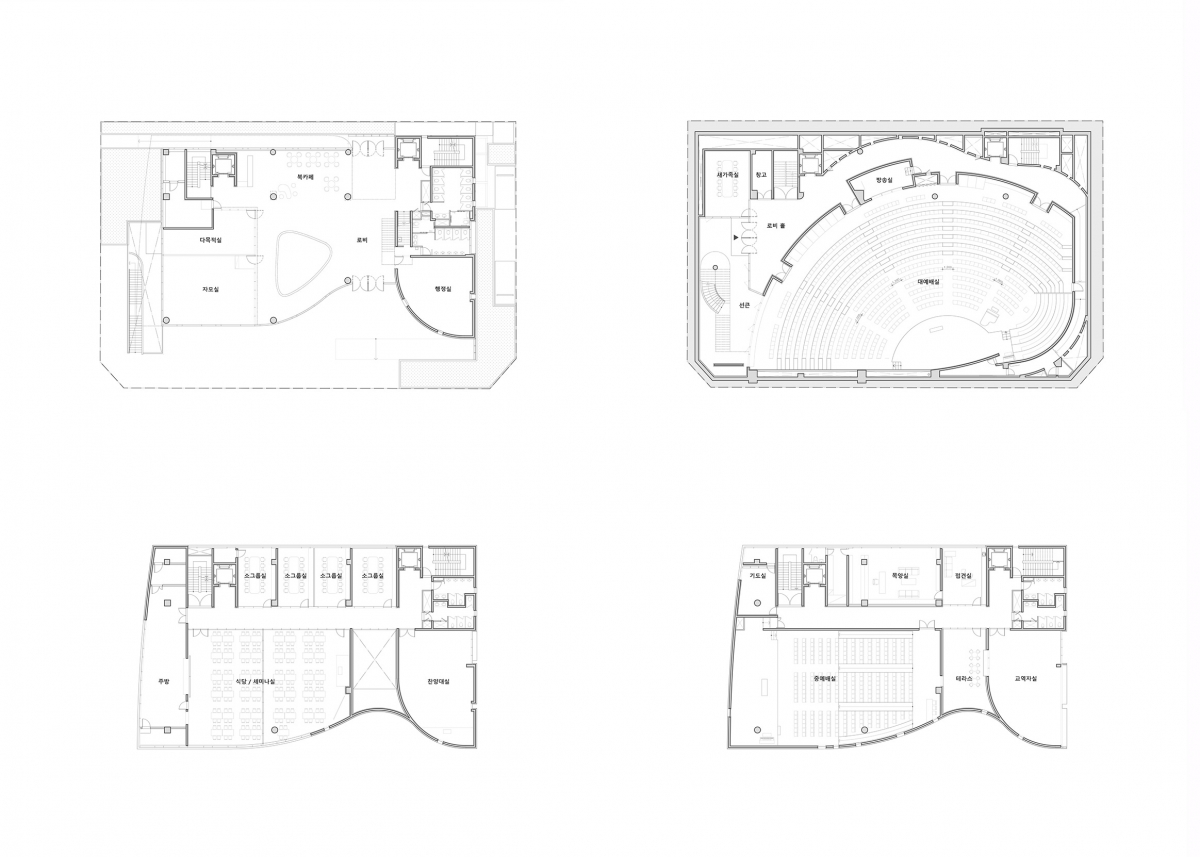 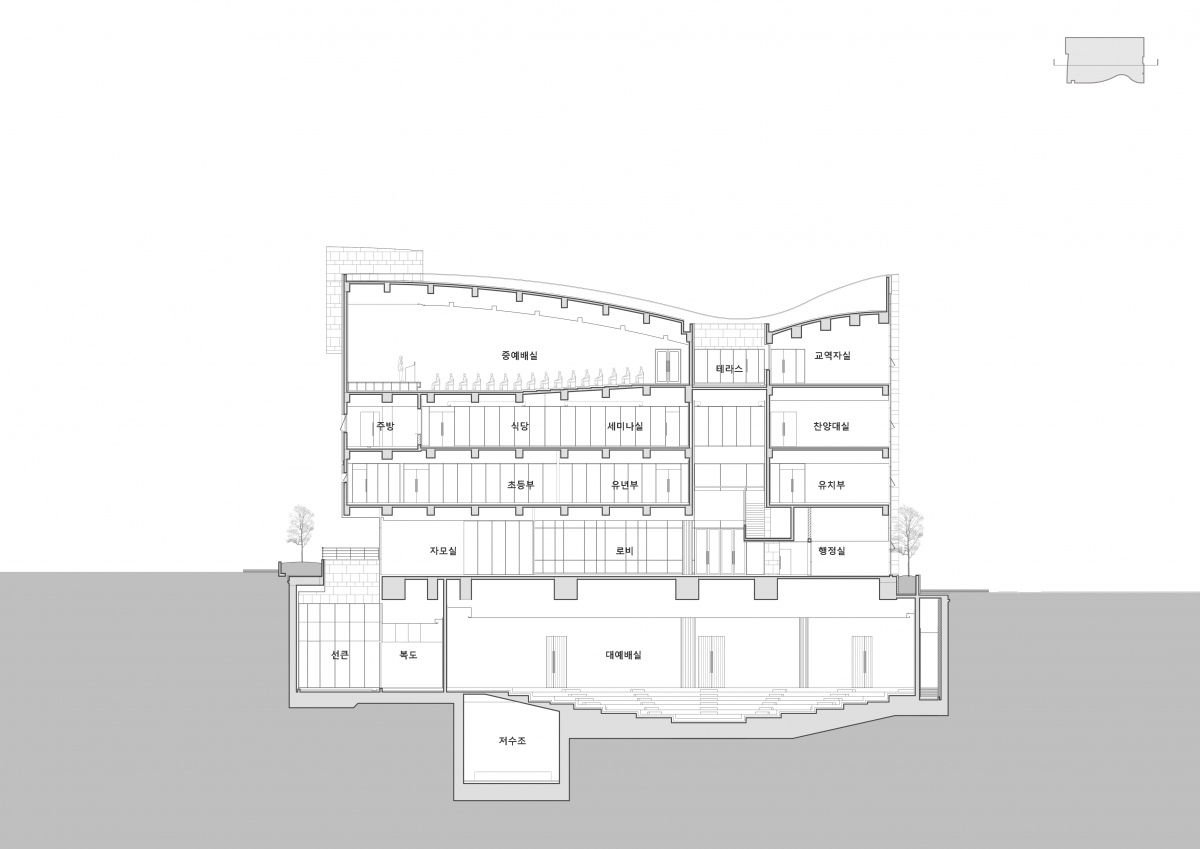 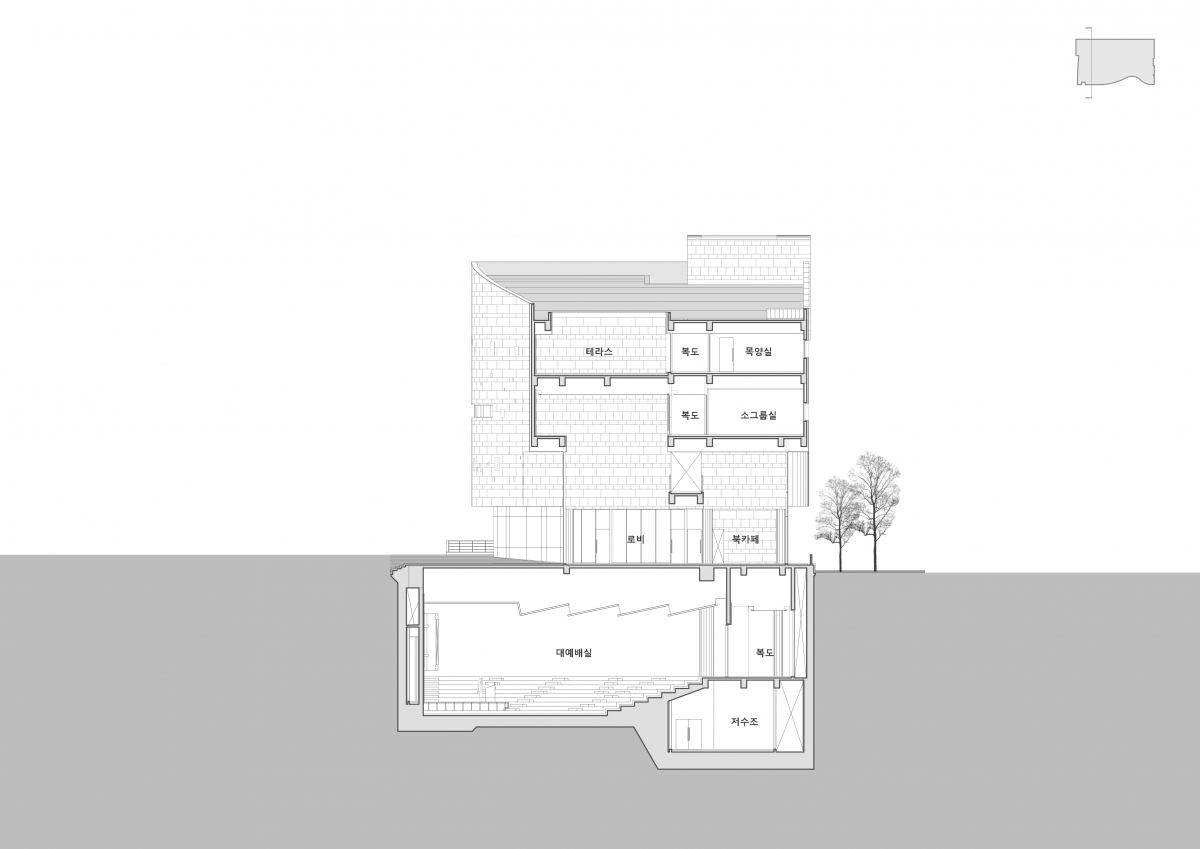 Lee Eunseok
Lee Eunseok graduated from the architecture department of Hongik University and the Université Paris 1 Panthéon-Sorbonne, acquiring a doctorate degree in the arts. He studied under Henri Ciriani at the Ecole d'Architecture Paris-Belleville, and acquired the DPLG. He has served as a Professor at the department of architecture at Kyunghee University from 1997 to present, and as the head of the Architecture Design Institute of Korea from 2016 to 2018.
Since establishing the Atelier KOMA (Korea Office of Modern Architecture) in 1996, his signature projects include a variety of churches including the Saemunan Church, Bujeon Glocal Vision Center, Pomo Church, KyungSan Church, World Vision Church, Neul Sem Church and the Heavenly Gem Church. He has completed a variety of projects and awarded many architectural awards for cultural facilities such as the Son Yangwon Memorial Museum, Tap Jung Luce, Vin Rouge and UJeonGa, residential facilities such as Lyann House and the Sejong City Detached Housing Lot, educational facilities such as the Chongshin University Scroll Building, the Geumsung Kindergarten, Dream School, and commercial facilities such as Hotel Entra.
SPACE BOOKS architecture architect Lee Eunseok Atelier KOMA Holy Light Church
LIST
bookmark_border
favorite_border
10