The planned Bujeon Global Vision Center (hereafter B.G.V.C.), on the site adjacent to Oncheon-Cheon (Oncheon Creek) across the Dongrae District in Busan, expresses a willingness to contribute to the international community through its name. It aims to communicate with Busan and Dongrae District to provide hospitality and peaceful sanctuary to Oncheon-Cheon (Oncheon Creek) and Busan citizens, and to embody a rich modern Christian programme that incorporates the city and nature. The purpose of the architecture is to be a landmark for missionary work, peace, and love.

This space is a Christian cultural complex open to the local community. In order to provide a welcoming natural landscape – like a rest area in a peaceful urban outdoor space - an entrance square, outdoor stairs and a public staircase to the rooftop garden have been created. After climbing the hill, the citizens Busan can enjoy a panoramic view of Busan from inside and outside the church. The pilgrimage staircase on the outside ramp leads to the entrance of each floor and connects the panorama, open in all directions, to the rooftop garden. At the top of the stairs, the rooftop garden under the Cross Tower opens in all directions to become the climax of the linear garden.
The open façade, which appears elevated like a huge departing ship, does not look like typical Christian architecture, with a spire, but reveals its positioning as a more dynamic space, open to nature, and as a complex building that can interact with the city. We hope that it will not only connect the current generation with future generations, but that it will also become an interactive place that encompasses Busan and the Pacific Ocean, and shares their love for the church and its neighbours. 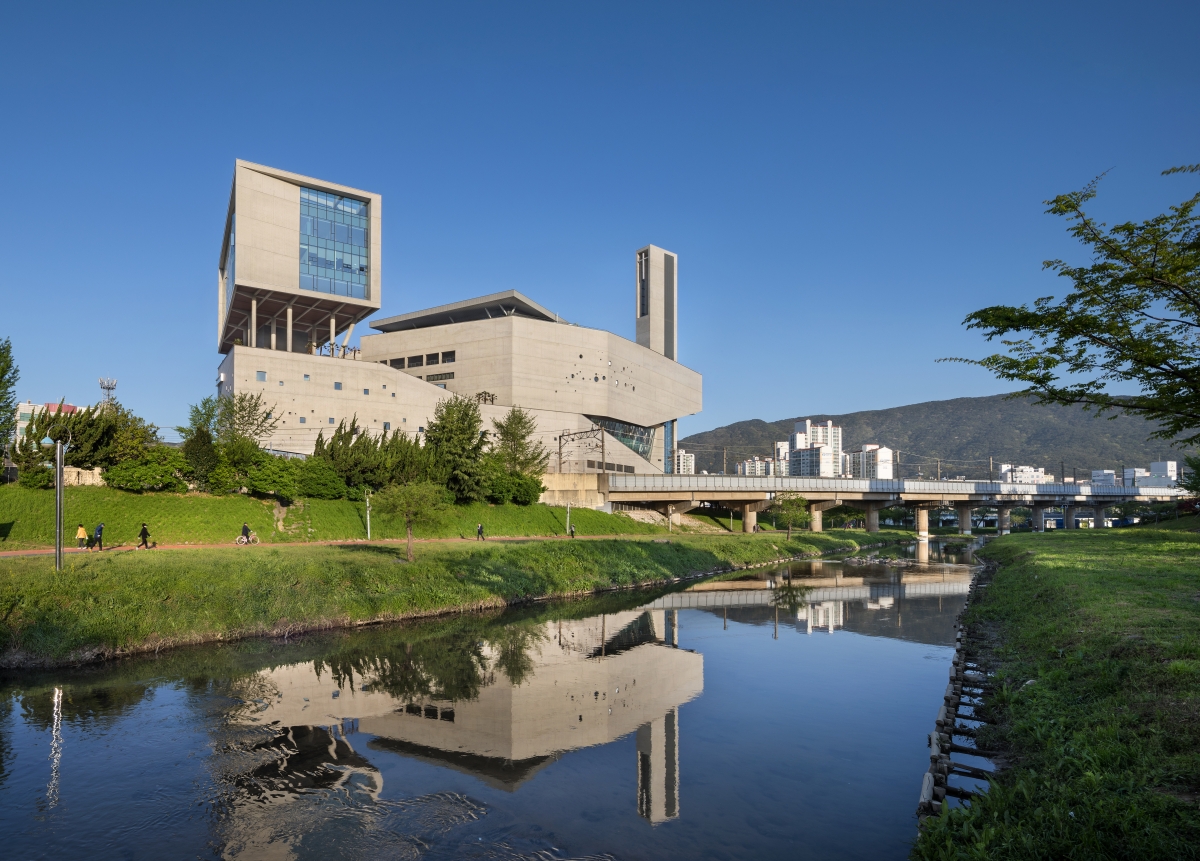 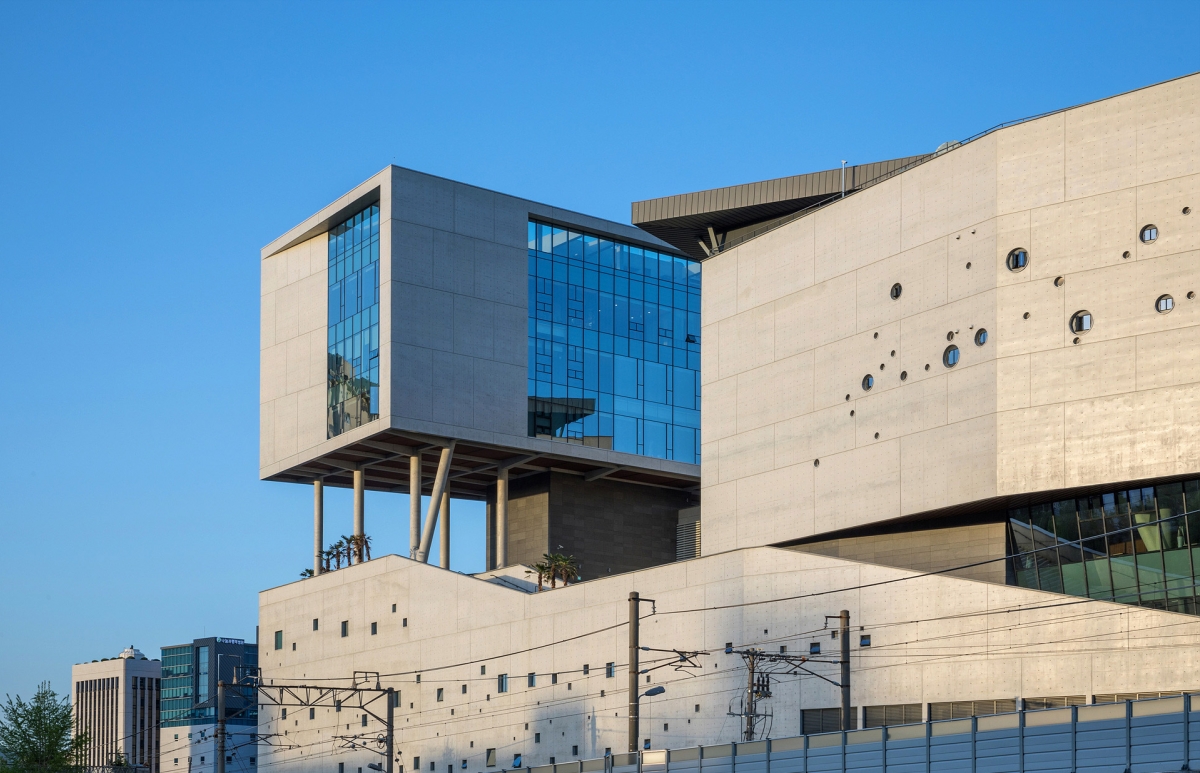 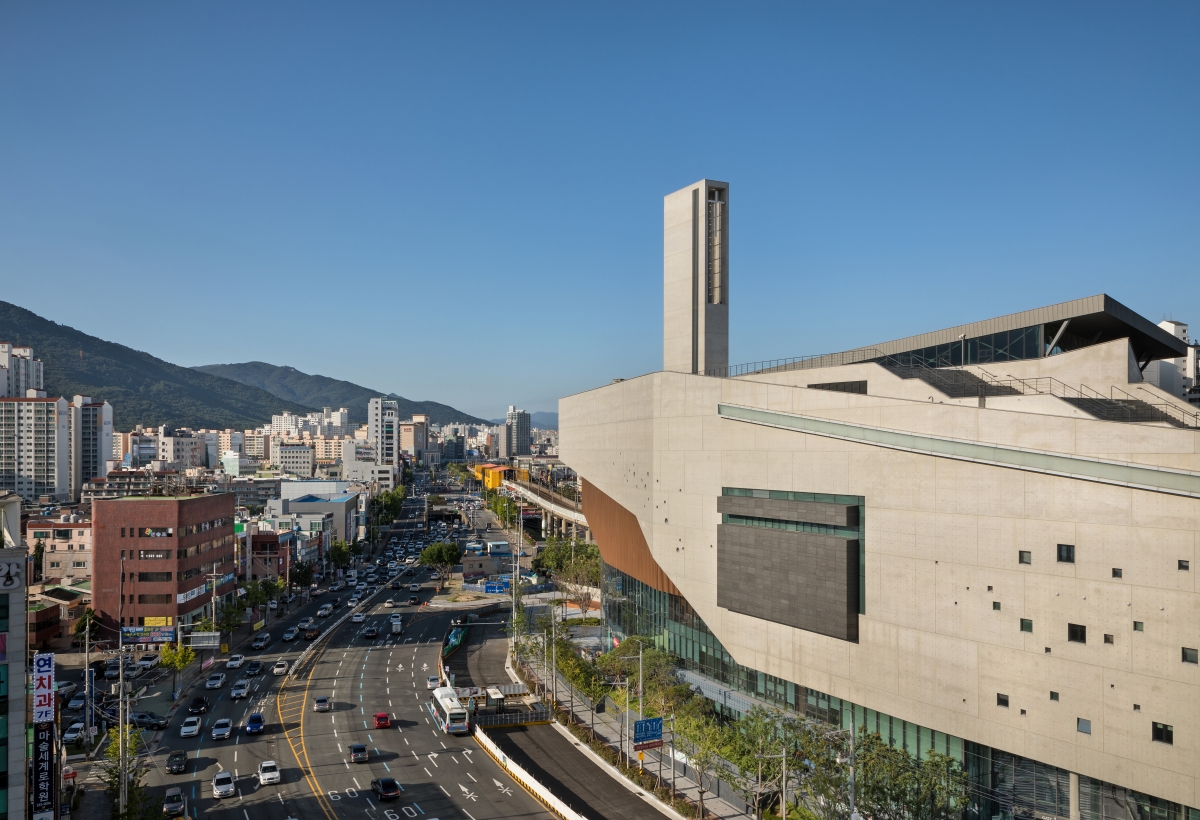 A huge funnel-shaped hall that connects the entrance to the main road and to the opening into the entrance square, covers whole of the first floor, and is also an urban street connecting the city, Oncheon-Cheon (Oncheon Creek) to Bujeon Church. Also, it is a place of interaction complete with a children’s library, restaurant, cafe, bookstore, and office linking neighbours and the church. The B.G.V.C is composed of a building for worship and an educational centre. The large inner side of the first and second floors attracts the flow of the city to the interior and the lobby on the third floor faces the music hall and the wedding hall. There is a large sloping space for worship through the fourth, fifth, and sixth floors, but a comfortable fan-shaped lobby facing Oncheon-Cheon (Oncheon Creek) is relatively low in height, conforming to the space under the stall, but is wide open horizontally and spacious enough for the city.
The B.G.V.C. is a building constructed using an exposed concrete structure and finishing materials so that it is an example of high-quality construction to projects both at home and abroad. This monumental exposed concrete construction has been accomplished with a maximum height of 28m and a circumference of 458m without an exceptional finish. It is a record-breaking steel concrete cantilevered structure, with the top part of the building appearing to float into the air. In order to establish the construction quality standard of this concrete, a deposit of a mock-up of the process and a thorough training of workers was carried out. In addition, numerous problems were addressed in advance and an experimental process took into consideration various other conditions. As a result, the graceful quality of the concrete and the security of the overall structure has been achieved.​ 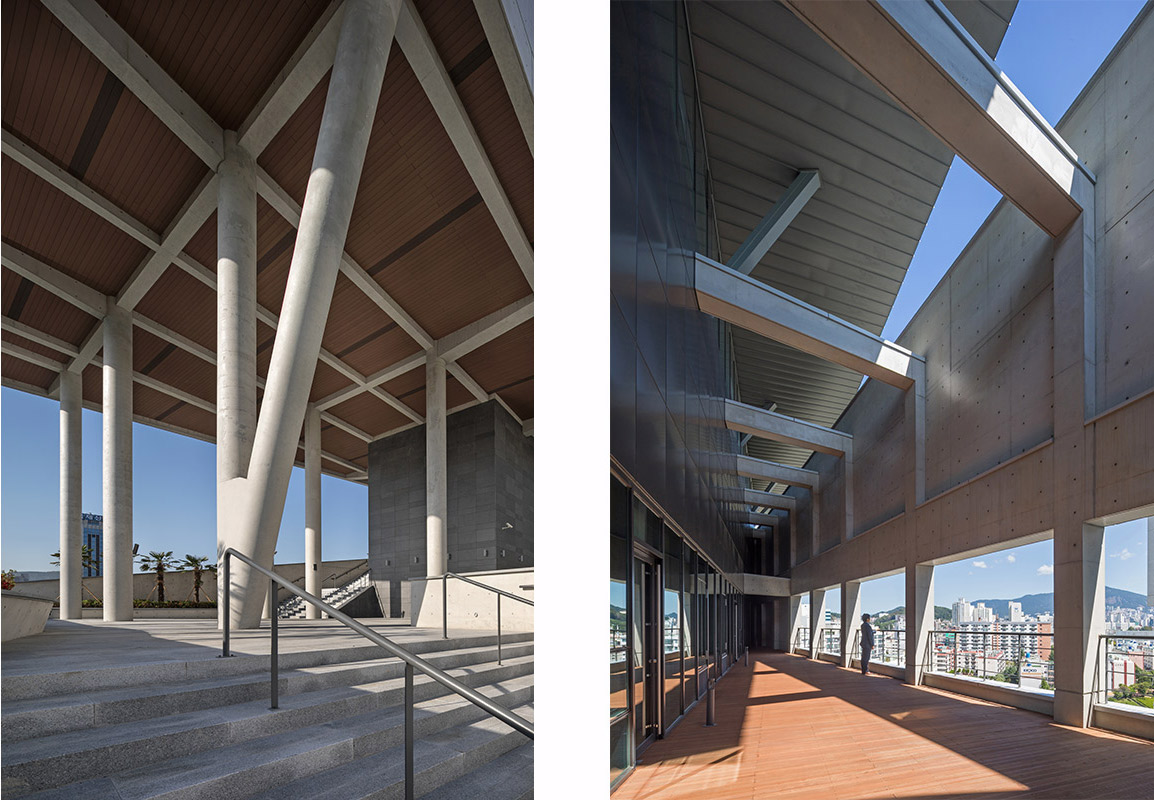 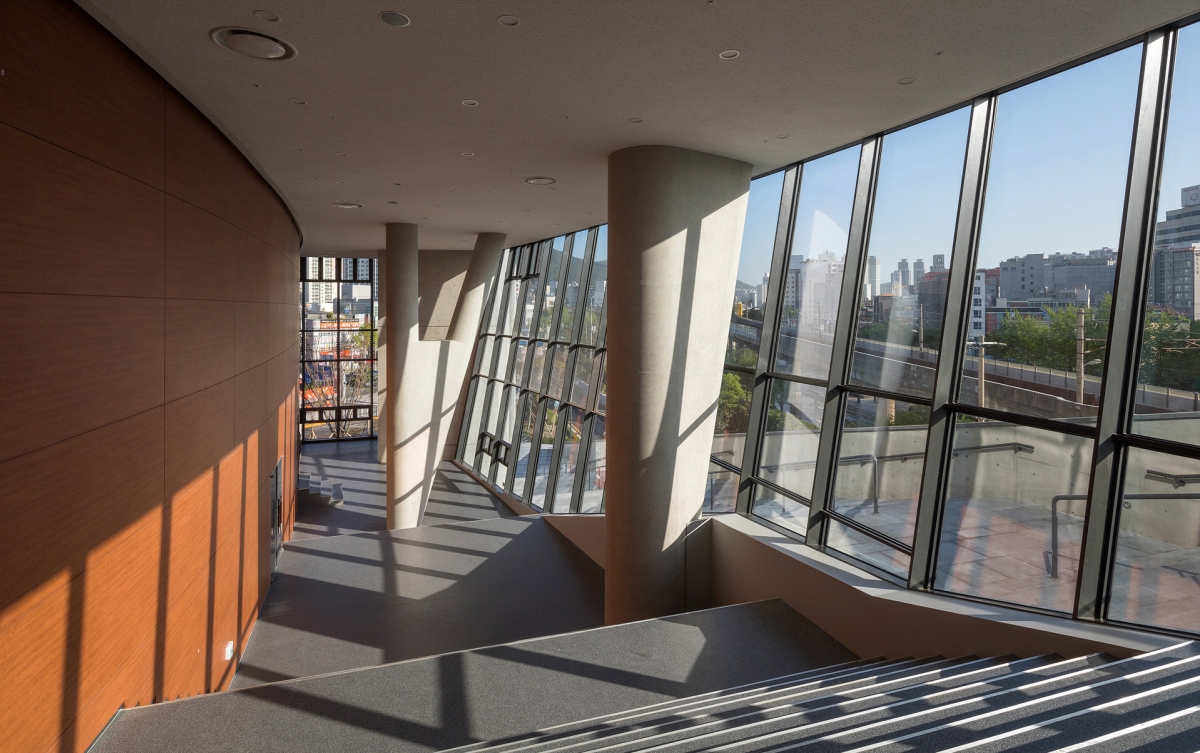 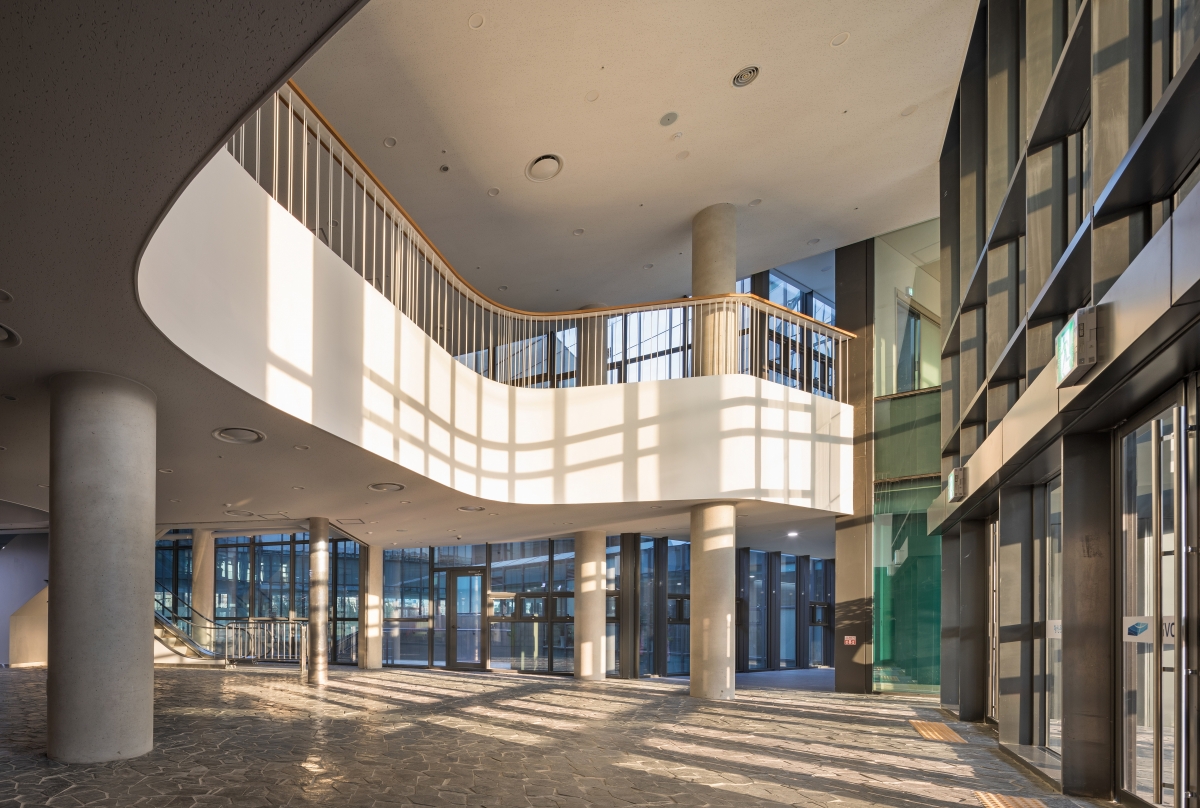 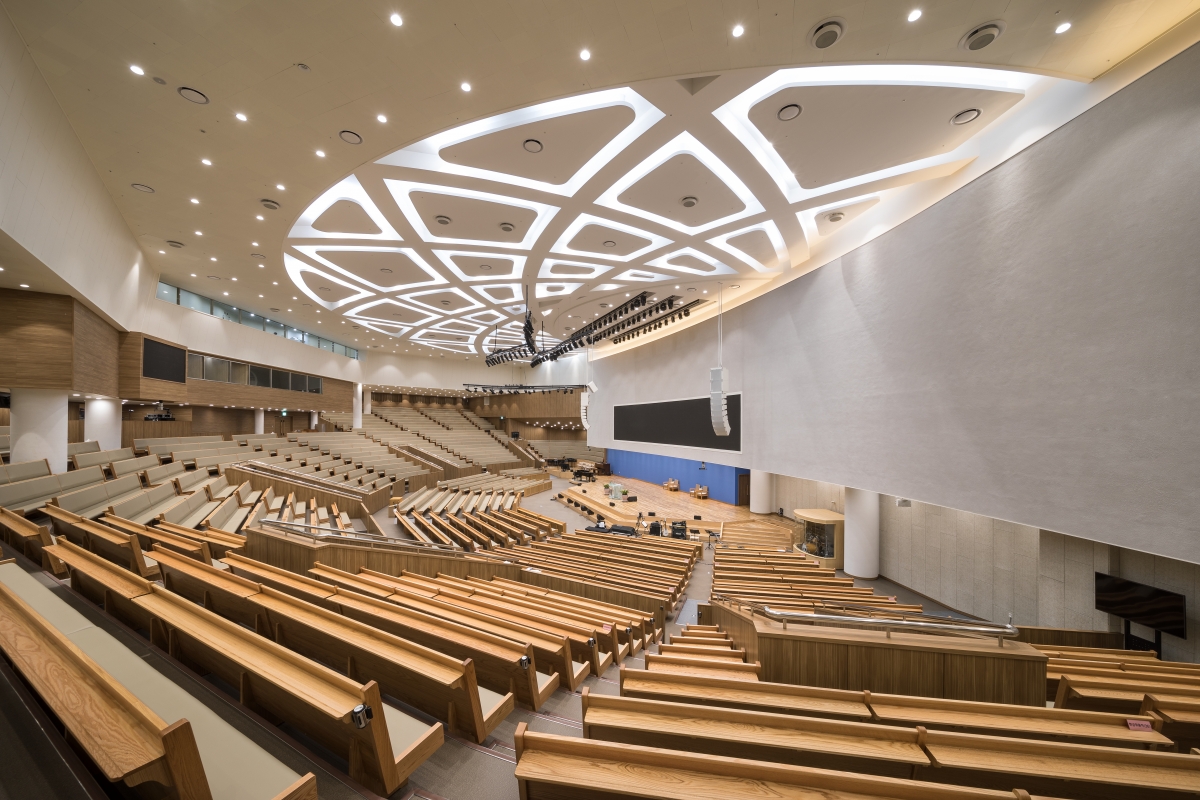 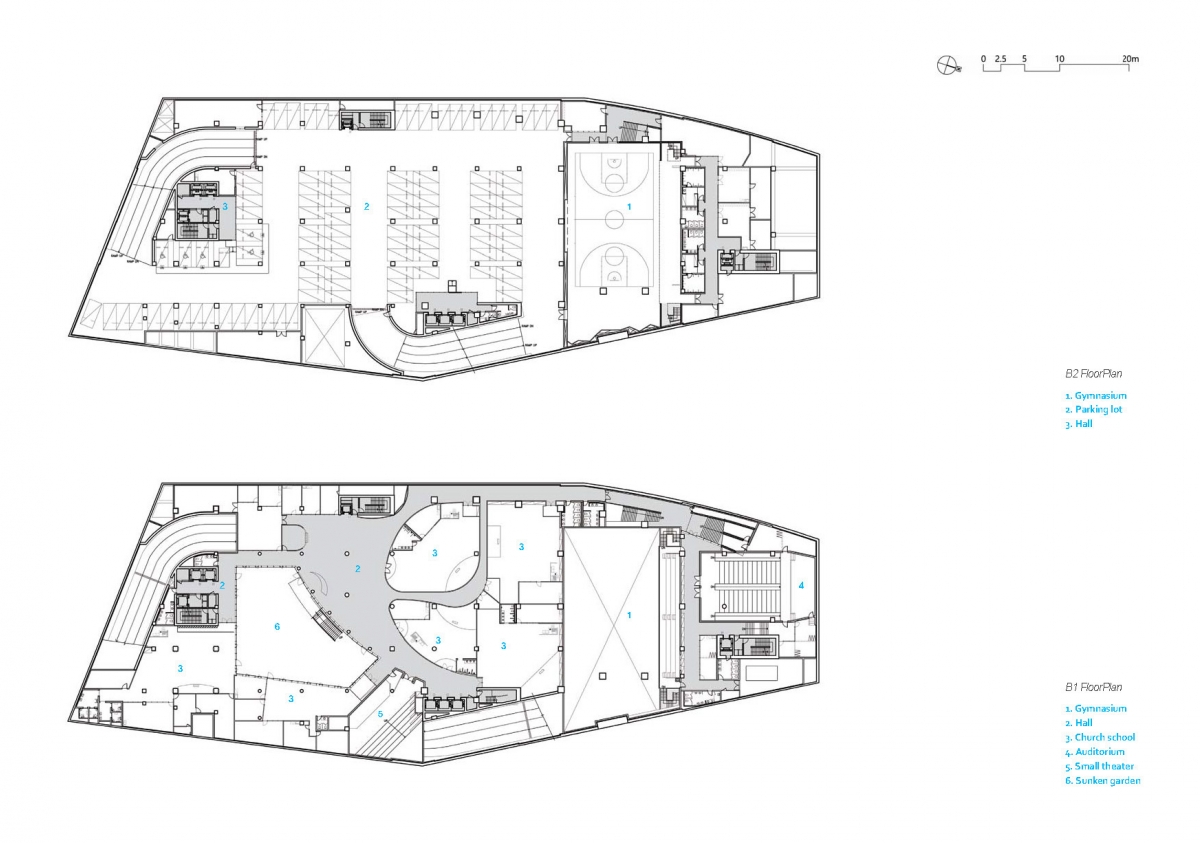 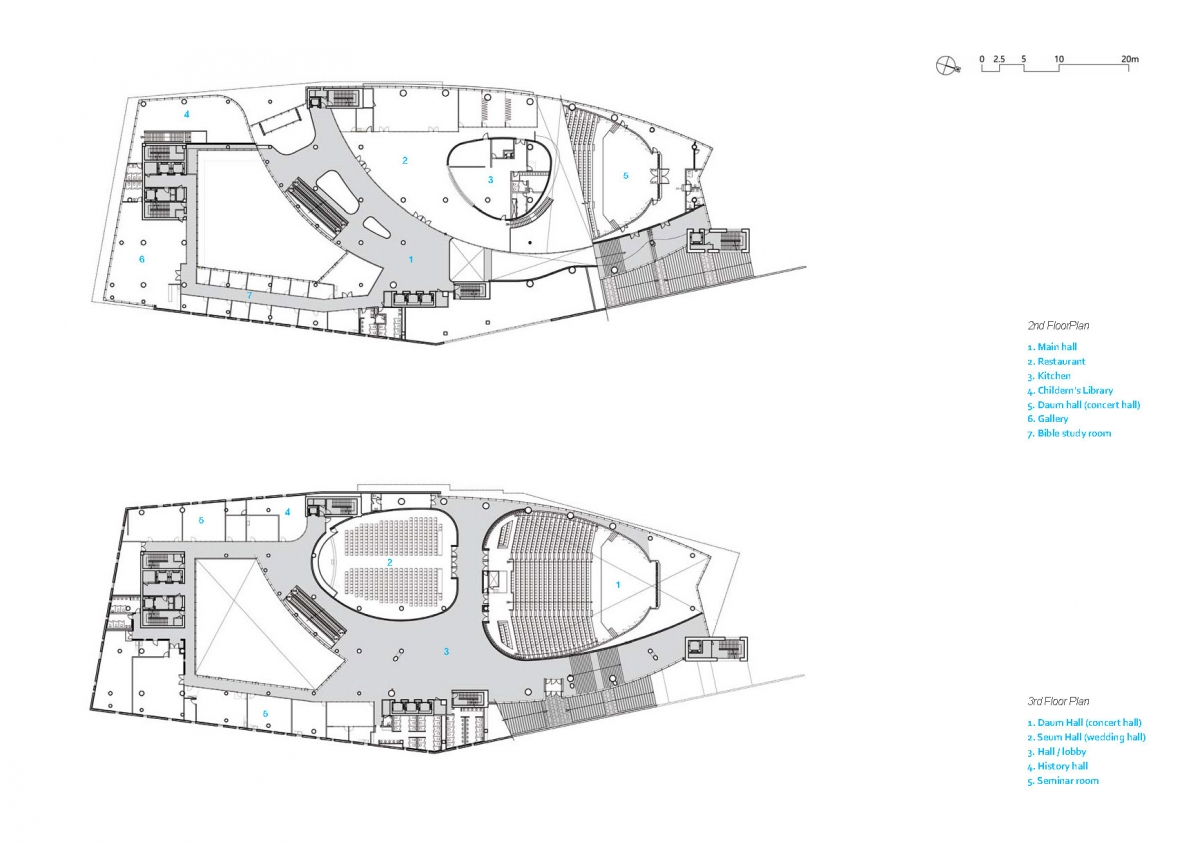 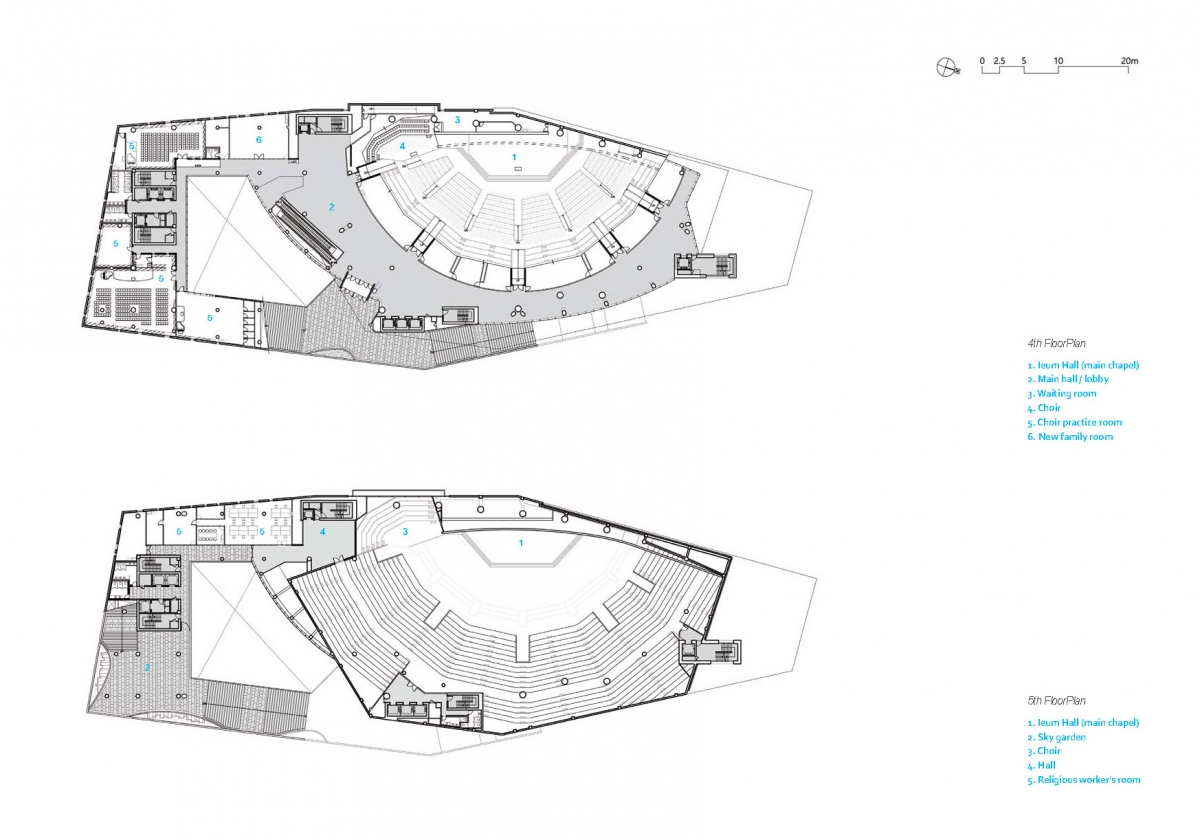 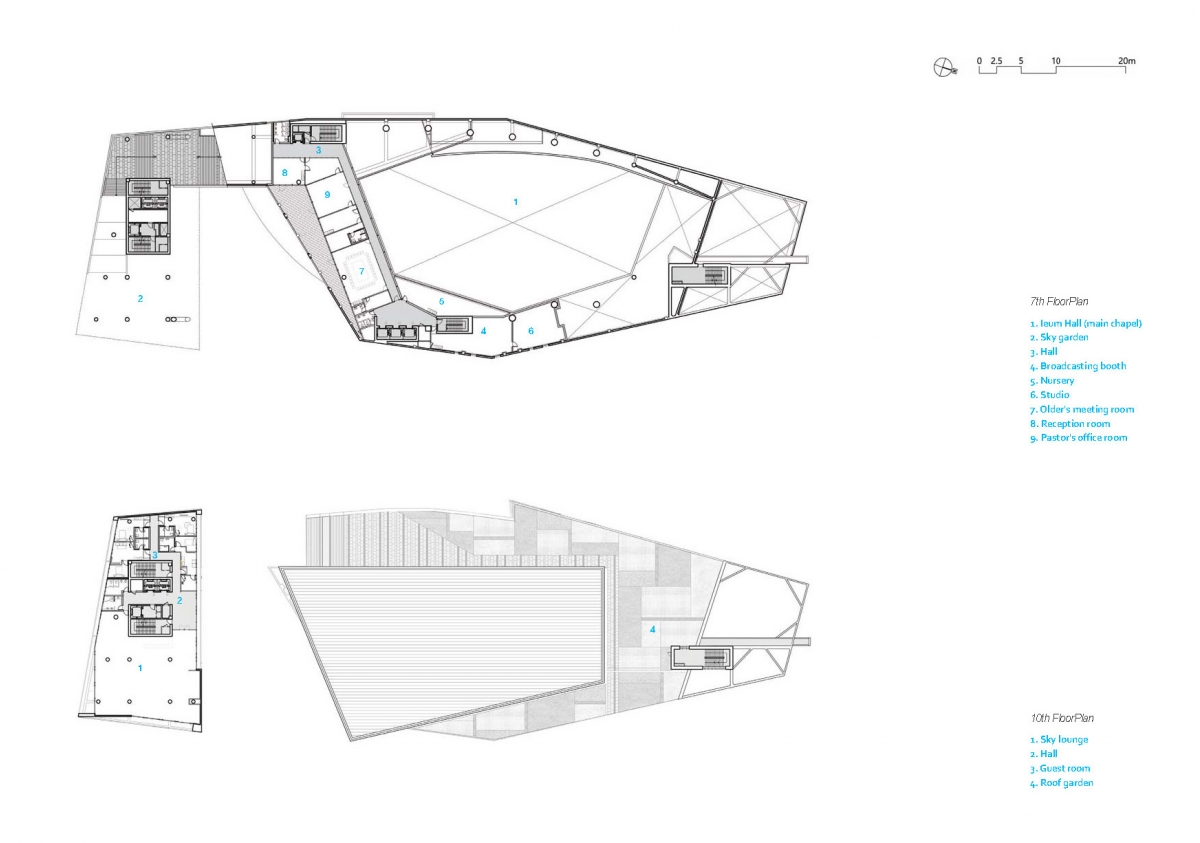 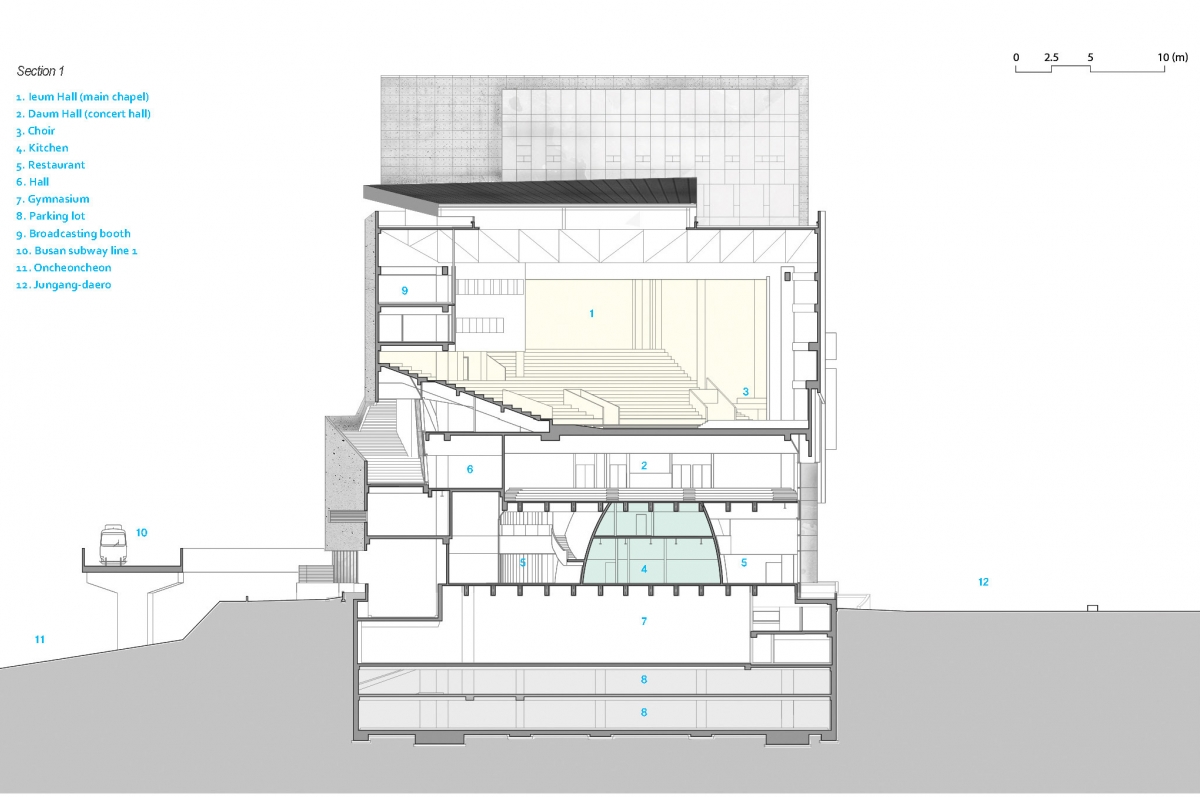 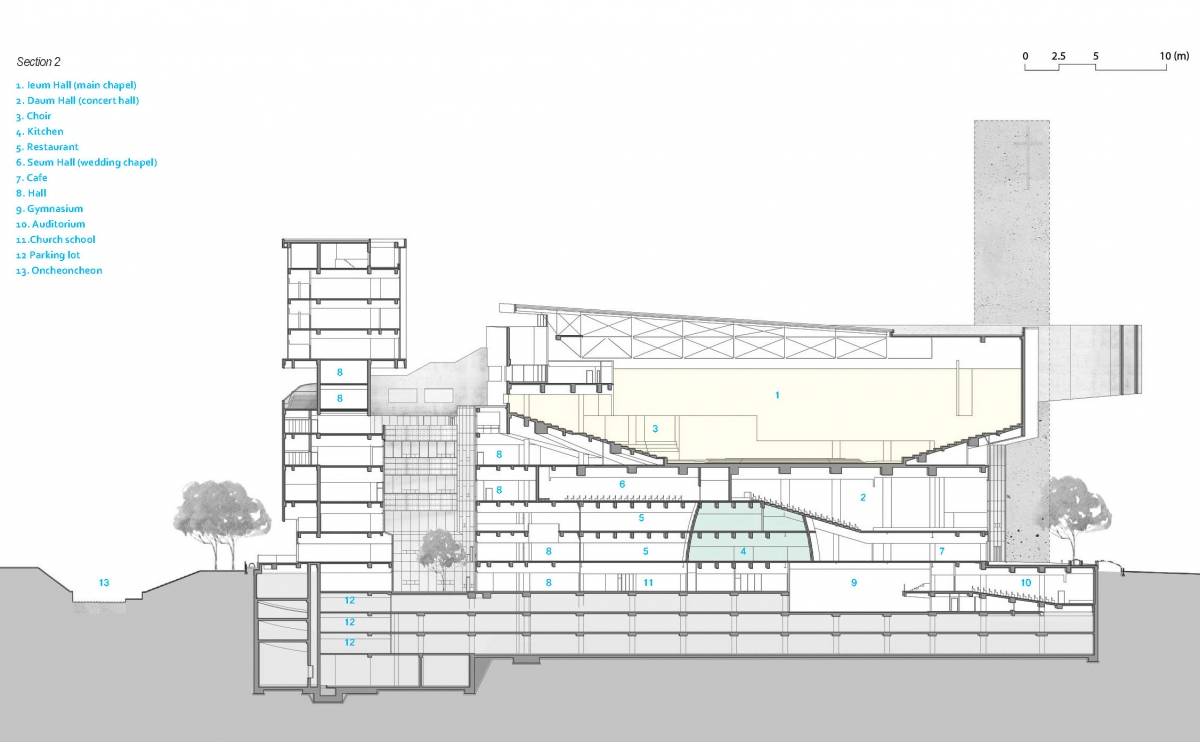 Lee Eunseok
Lee Eunseok graduated from the architecture department of Hongik University and the Université Paris 1 Panthéon-Sorbonne, acquiring a doctorate degree in the arts. He studied under Henri Ciriani at the Ecole d'Architecture Paris-Belleville, and acquired the DPLG. He has served as a Professor at the department of architecture at Kyunghee University from 1997 to present, and as the head of the Architecture Design Institute of Korea from 2016 to 2018.
Since establishing the Atelier KOMA (Korea Office of Modern Architecture) in 1996, his signature projects include a variety of churches including the Saemunan Church, Bujeon Glocal Vision Center, Pomo Church, KyungSan Church, World Vision Church, Neul Sem Church and the Heavenly Gem Church. He has completed a variety of projects and awarded many architectural awards for cultural facilities such as the Son Yangwon Memorial Museum, Tap Jung Luce, Vin Rouge and UJeonGa, residential facilities such as Lyann House and the Sejong City Detached Housing Lot, educational facilities such as the Chongshin University Scroll Building, the Geumsung Kindergarten, Dream School, and commercial facilities such as Hotel Entra.
SPACE BOOKS ARCHITECTURE ARCHITECT LEE EUNSEOK ATELIER KOMA CHURCH Bujeon Global Vision Center Busan
LIST
bookmark_border
favorite_border
12