Saemoonan Church, the first Korean Protestant church, celebrated its 132nd anniversary and in celebration built a new church in Gwanghwamun Sinmunno. It is in the shape of a mother’s arms, as if her arms were extending towards the sky. At the time of the design competition in 2010, the Korean Christian community made functional aspects a top priority for church buildings, and many large churches also chose to make their presence known on a large scale. However, the Saemoonan Church is based on four distinct church building themes: historicity as the mother church of the Korean Protestant Church, the symbolism of the door opened to a heavenly wide expanse of space to express Christ as light and a space of water conveying the meaning of baptism and harmony. We revised the theme of God’s love and neighbourly love, to incorporate them within the design. God’s love was mainly described through the symbolism of space, and neighborly love was expressed publicly through the façade and the layout of the building.
By not following the expectations of church architecture, with a spire and a Gothic building, which have dominated design and formed Christian archetypes over the past two thousand years, it is considered a major contribution to modern church Architecture. The conventional spire of the Saemoonan Church was replaced with a soft curved effect open to the sky, and the excessive ornamentation was converted to simple and abstract expressions. The soft curve on the façade metaphorically expresses God’s love and mercy rather than focusing on enhancing the authority of the church. In addition, rather than creating a solemn atmosphere in the form of a traditional long corridor, a fan-shaped chapel plane is suggestive of a new era of worship that encourages the dynamic participation of believers. 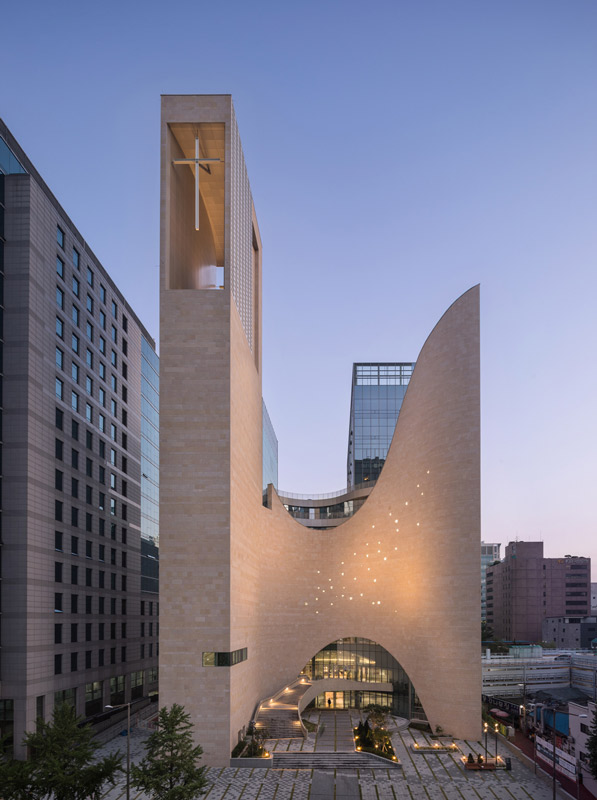 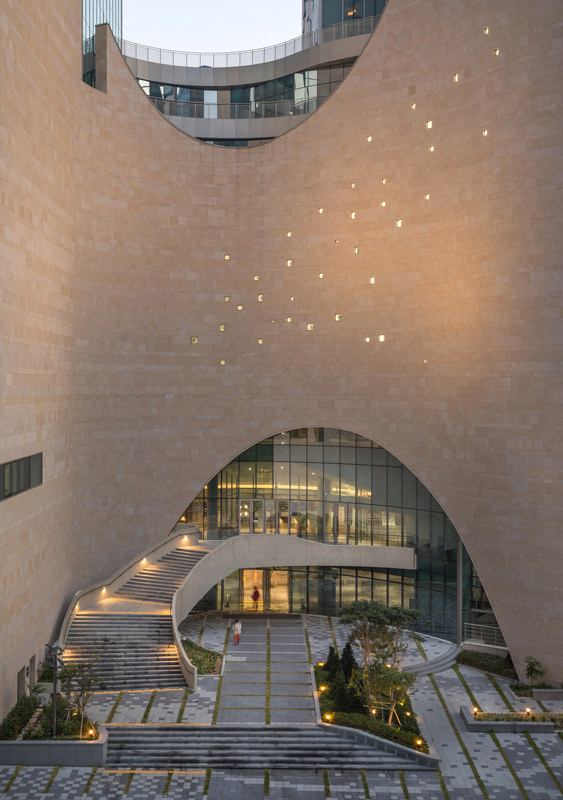 The public architectural intentions behind encouraging neighboring love are well expressed throughout the Saemoonan Church, and these are architectural challenges to be contemplated by the churches of the 21st century. In other words, rather than mass-producing church architecture in an assumed symbolic and visualised one-dimensional form, as a means of universal enlightenment, a sense of the potential for public and spatial programmes that will support the lives of local people must exist within the church. The façade with a concave surface - a feature you won’t find anywhere else in the world - and the courtyard of Saemoonan-ro, built by the arched gate, are intended as practical resting places for citizens, opening the church to its neighbors rather than creating a holy place of worship characterized by monastic closure. In addition, the section that flows through the lobby to the Sejong Center for the Performing Arts also demonstrates the openness of the church.

Moreover, a small chapel that reflects part of the history of the church through the use of the old bricks of the church will also be used as an open cultural space. In the office building forest of Seoul, the Saemoonan Church is an oasis in the bustling city, a free space of opening and emptying, rather than reacting to the commercial philosophy of scale like the surrounding buildings of maximum volume. This is why modern churches publicly express their neighbourly love for the city.
The transparent glass box, intended to disappear into the sky beyond the curved wall, not only achieves morphological harmony with the soft curved wall, but also protects future generations from the busy streets and creates a bright educational centre with a roof garden. These are architectural strategies. In addition, the top level of the educational centre building and the high altitude of the Cross Tower can be a memorial space open to all citizens, as many churches around the world open the church dome to their neighbours. 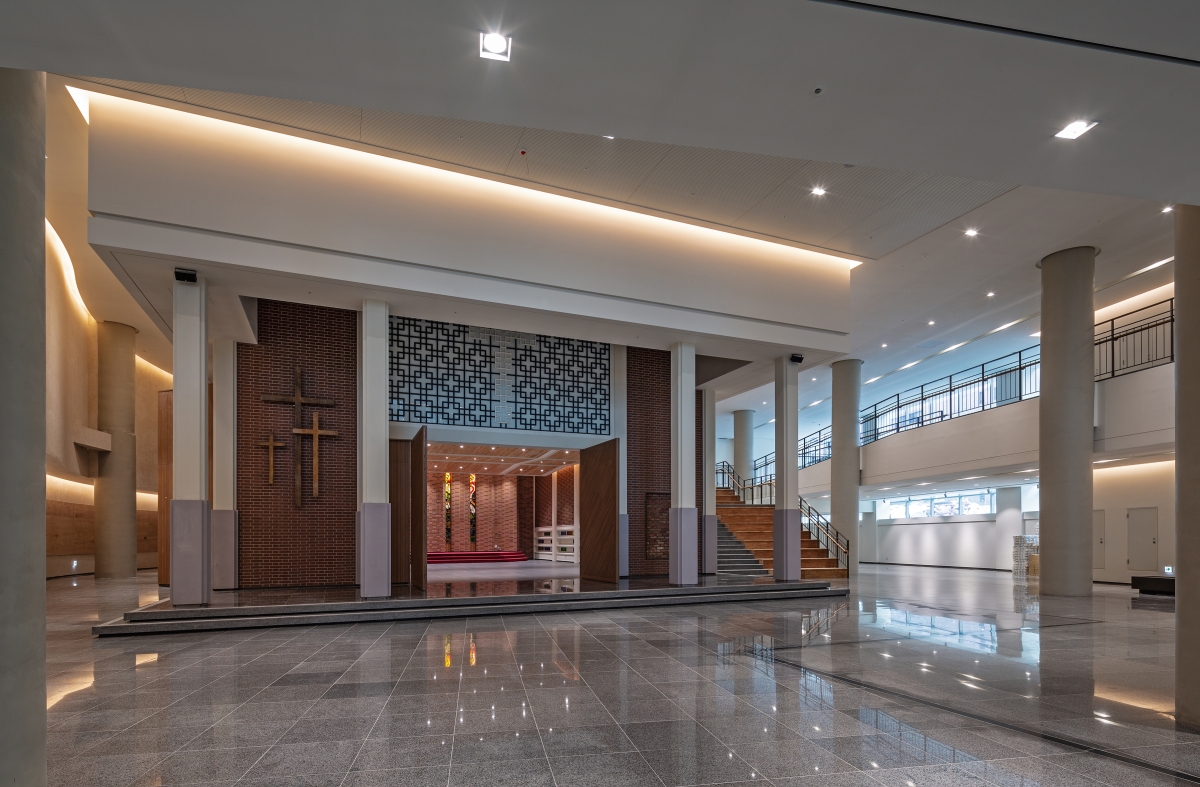 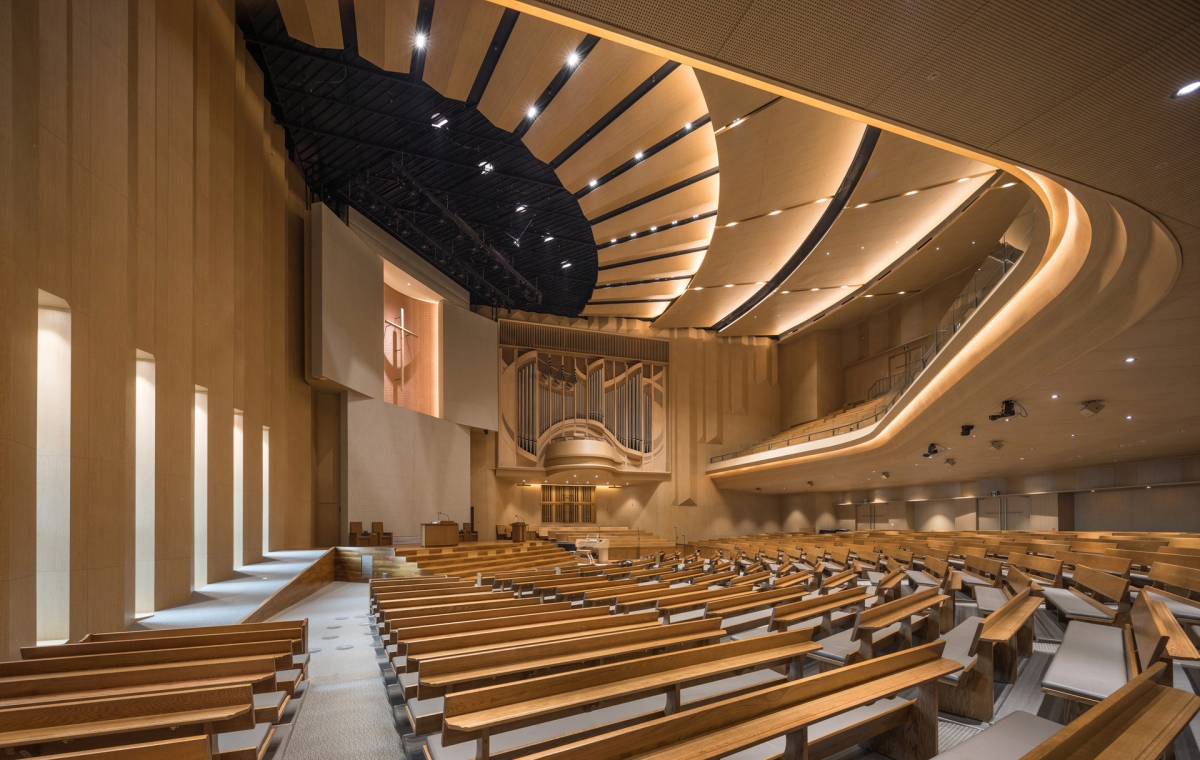 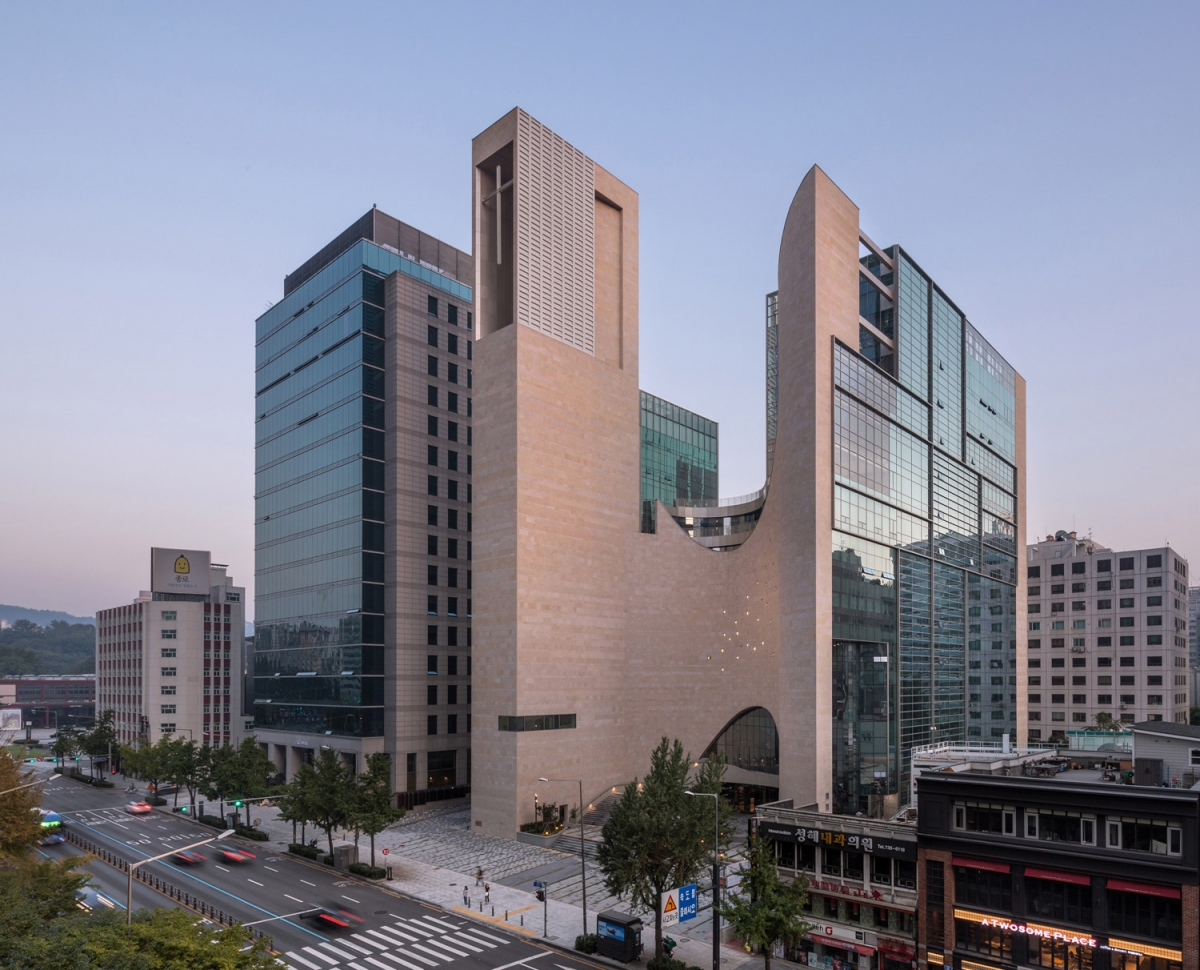 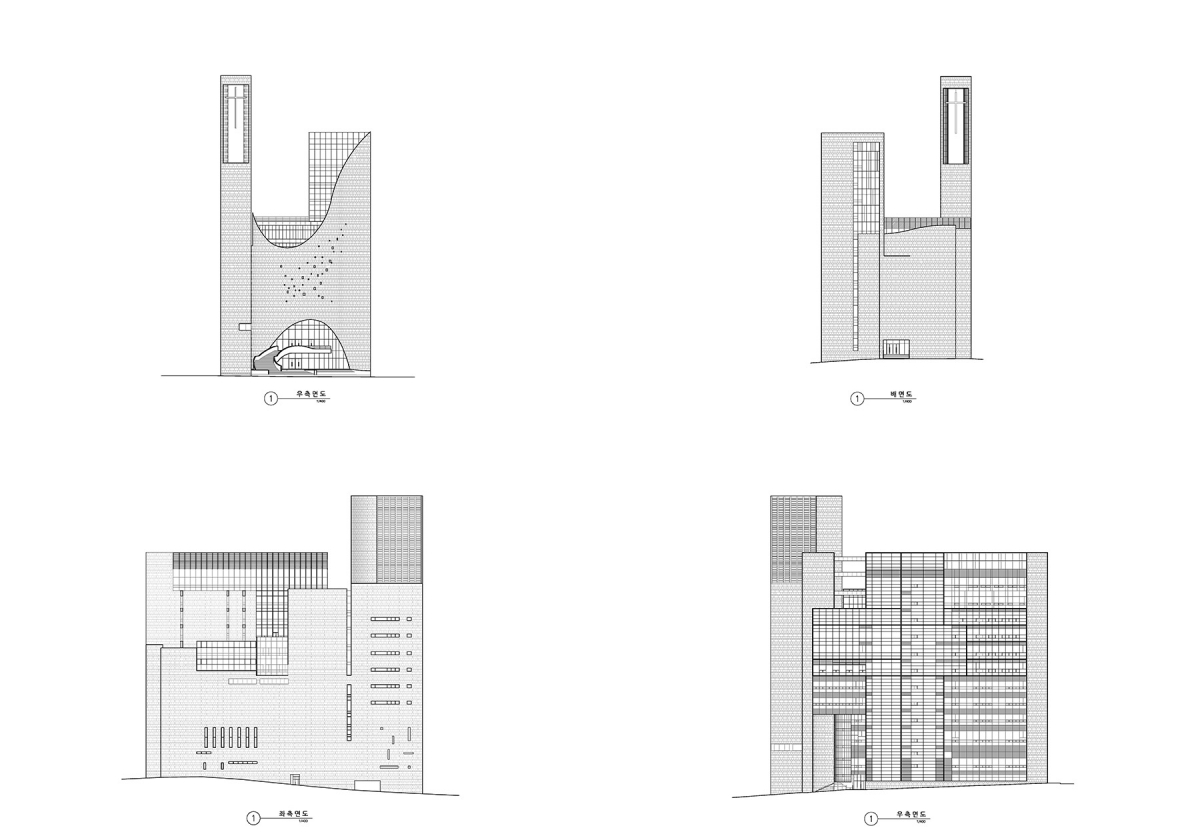 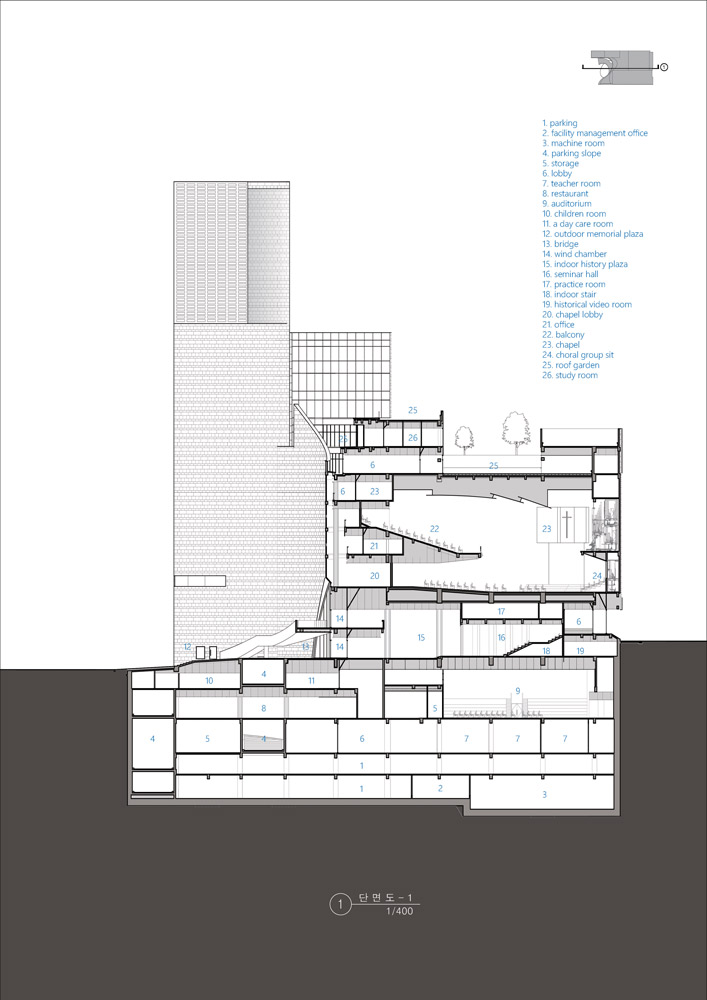 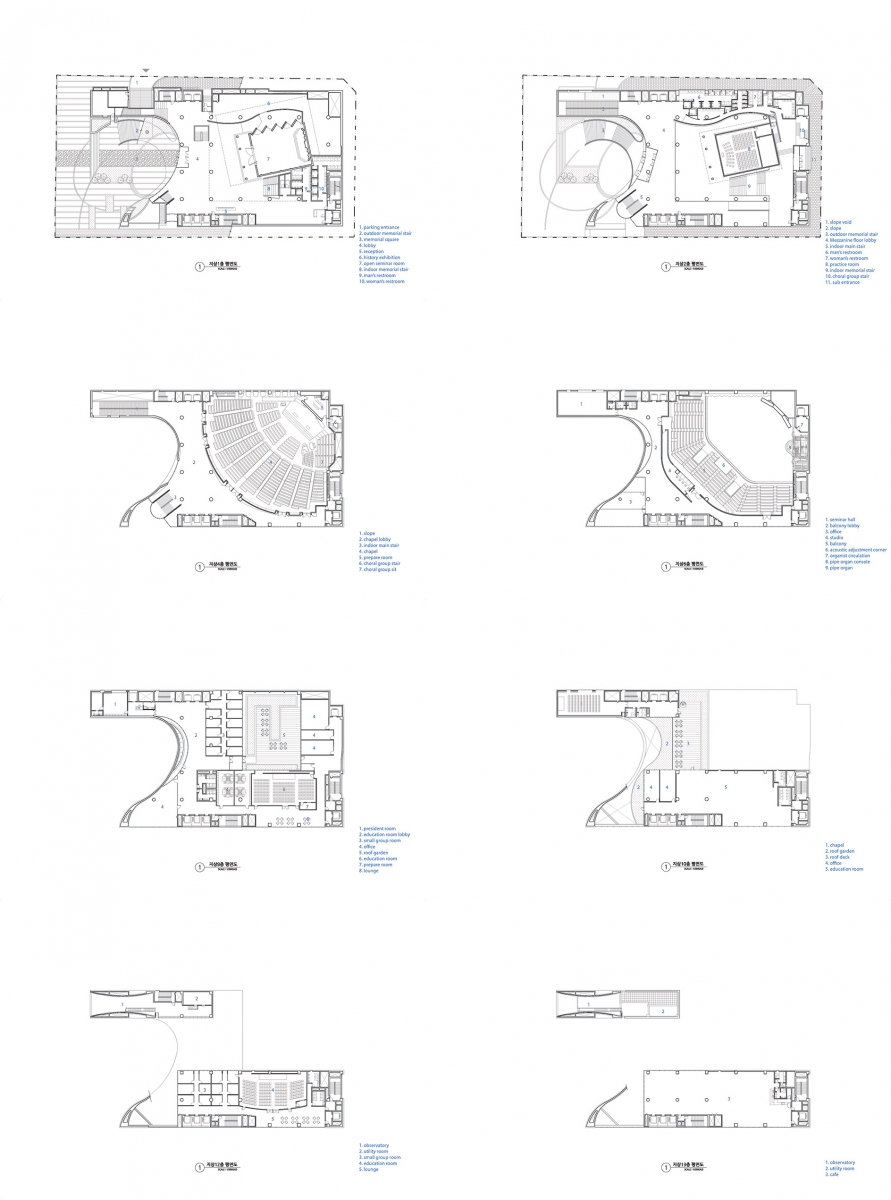 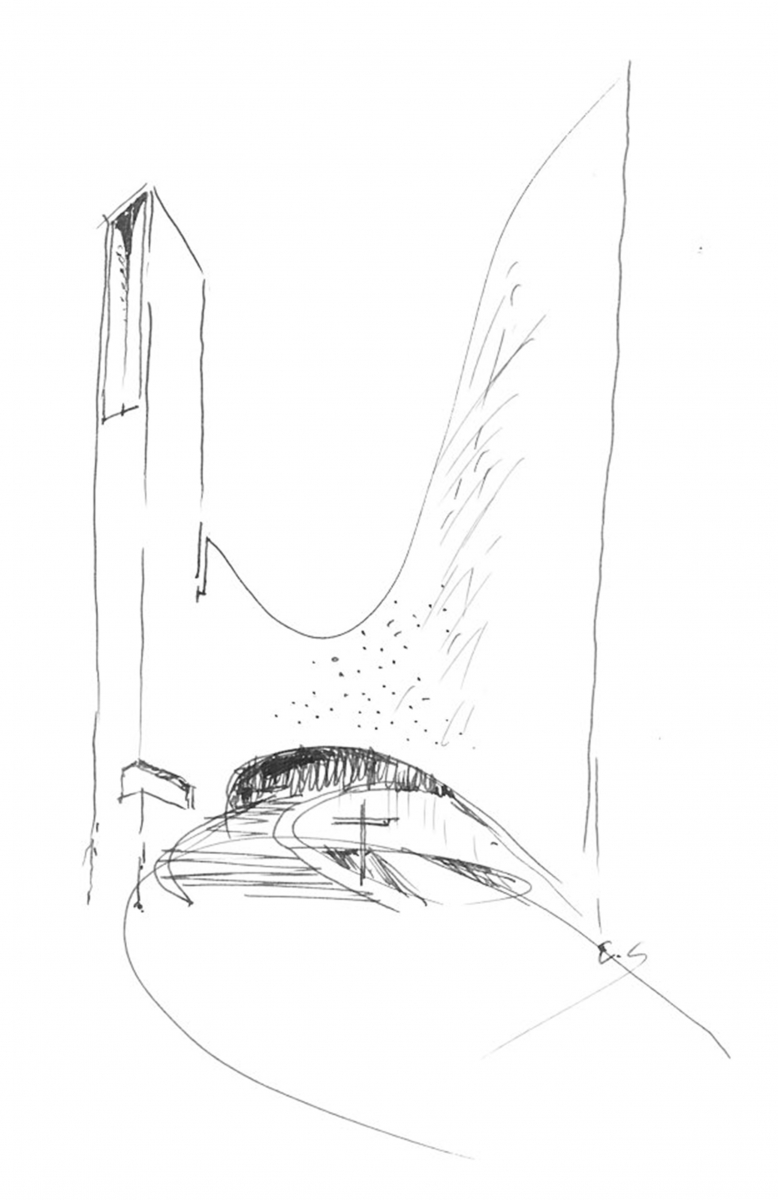 Lee Eunseok
Lee Eunseok graduated from the architecture department of Hongik University and the Université Paris 1 Panthéon-Sorbonne, acquiring a doctorate degree in the arts. He studied under Henri Ciriani at the Ecole d'Architecture Paris-Belleville, and acquired the DPLG. He has served as a Professor at the department of architecture at Kyunghee University from 1997 to present, and as the head of the Architecture Design Institute of Korea from 2016 to 2018.
Since establishing the Atelier KOMA (Korea Office of Modern Architecture) in 1996, his signature projects include a variety of churches including the Saemunan Church, Bujeon Glocal Vision Center, Pomo Church, KyungSan Church, World Vision Church, Neul Sem Church and the Heavenly Gem Church. He has completed a variety of projects and awarded many architectural awards for cultural facilities such as the Son Yangwon Memorial Museum, Tap Jung Luce, Vin Rouge and UJeonGa, residential facilities such as Lyann House and the Sejong City Detached Housing Lot, educational facilities such as the Chongshin University Scroll Building, the Geumsung Kindergarten, Dream School, and commercial facilities such as Hotel Entra.