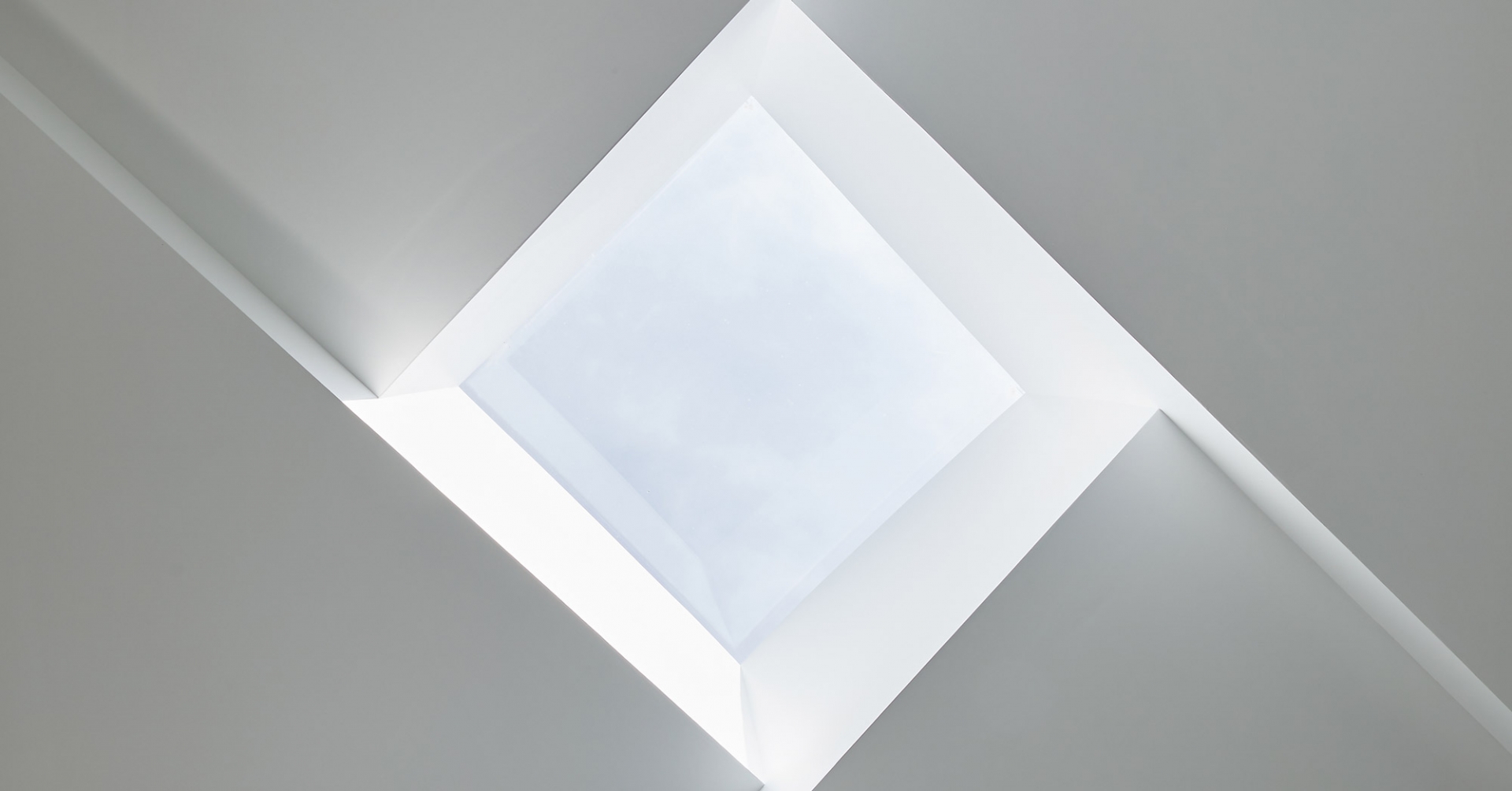 On the Necessity of ‘One Special Thing’​

I seated myself in my airplane seat and opened my notebook out of habit, in the hope of finding inspiration for an apt opening line concerning the the design drawings and photographs of the Triple Square House. While scribbling down a few meaningless lines, I recalled a text that I often whispered to myself, when things weren’t going well: ‘architecture is a reconstruction of both the site and the programme’. Today, architecture forces architects to come up with their own interpretations during this process of reconstruction, and architects develop their guiding concepts in their own way. The only moment they reassess their established concept is when they finally face the physical substance (architecture).

Triple Square House is the very first work of Studio李心田心, which means there is no precedent. This is exactly what I intrigued me. Obviously, the architect didn’t have a chance to conduct an ‘empirical study’ through which he would have been able to re-examine his ideas by actualizing them.

I met the architect at Gate 2 of Jeju International Airport. We moved to a café nearby, and there he began to tell me a long story about Triple Square House. The site is of an odd shape, which looks like two overlapping quadrangles. Its former owner also tried to build a house with an annex in which to live with his children, like the present owner. While sharing each other assumptions of the strange shape of this site, the architect naturally changed the conversation to a story of three squares. From the beginning, he wanted to grant ‘one special thing’ to this house, and this wish led him to adopt a geometrical approach according to which he combined three squares. The plane of combined squares is divided into nine sections, and during this process a quadrangle ceiling inscribed in the square at an angle of 45。 was formed. The four sides of the ceiling were then extended until the ceiling became a quadrangle roof that would stretch to the corners of the outer wall. It was interesting how these three squares came to have a perfect geometrical form and order, which finally defined the appearance of the house. I could more easily understand the reason behind the arrangement of two squares, positioned at an appropriated interval inside the 8-shaped site. 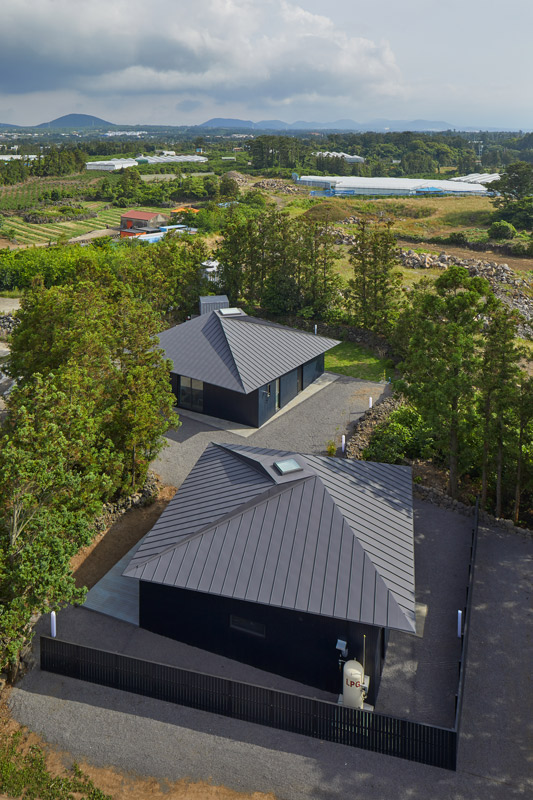 However, there were still a couple of questions in my mind. As these three squares contributed only to forming the external skins enveloping the house (skylights, ceilings and outer walls), the 9-split plane was not developed into a system that would define the order of the internal space. It was difficult to find any clue about how the balance between the three squares was achieved or about how the elaborated concept or geometrical order of the 9-split plane from the two house building’s floor plans on which the roof and skylights are installed was attained.

Although many questions remained unsolved, I was looking forward to seeing the skylights installed at the centre of the house and prayed that Jeju, with its fickle weather, would put a stop to the rain pouring down.

Two square boxes stood neatly behind a Jeju-style stone wall and a black wooden fence. I felt a little sorry to see that the architect had chosen a realistic option (black oil-stained wood) over the carbonized wood proposed in the original specifications. The house was weighty and solid enough to appear dominant over its surroundings, and thus reminded me of the black square in the iconic suprematist paintings by Malevich. And firmly laid above the black box was a windmill-shaped metal roof with eaves that stretched out smoothly at a slightly twisted angle. I walked into the porch, and my eyes naturally turned towards the ceiling. Even though there was no sunlight coming in, the area around them was full of a certain amount of subtle light that emanated from the window particularly to the north of the space. A number of diagonal lines run across the walls and ceiling in the form of a windmill-shaped roof, and the corner areas are connected to the smooth triangular ceiling while the skylights are brightly lit by indirect lighting. When our conversation came close to the end, the client began to talk about another square that doesn’t appear on rainy days. She said she feels a warmth whenever walking into the square-shaped light that shines down onto the hall floor under her bare feet.

23:00 Back to Gimpo International Airport

What would it have been like if the weather on that day in Jeju had been good and I could have seen the winter sunlight pouring through the skylights of the Triple Square House? Or, how would my experience have been altered if I hadn’t heard the story about the hidden square?

I asked the architect if it meant some particular ‘part’ that might represent the whole, and he answered that it’s not intended as a specific ‘part’ to which attention is drawn but as an element that will provide a necessary and sufficient context for the house.In some cases, this part represents the whole narrative, but on the other hand, it’s not rare to find that they turn out to be a clumsy tool devised to stimulate a given emotion at a particular moment. Now it’s time for Studio李心田心 to carefully reassess the architect’s idea and the physical substance expressed through the three squares in the Triple Square House. 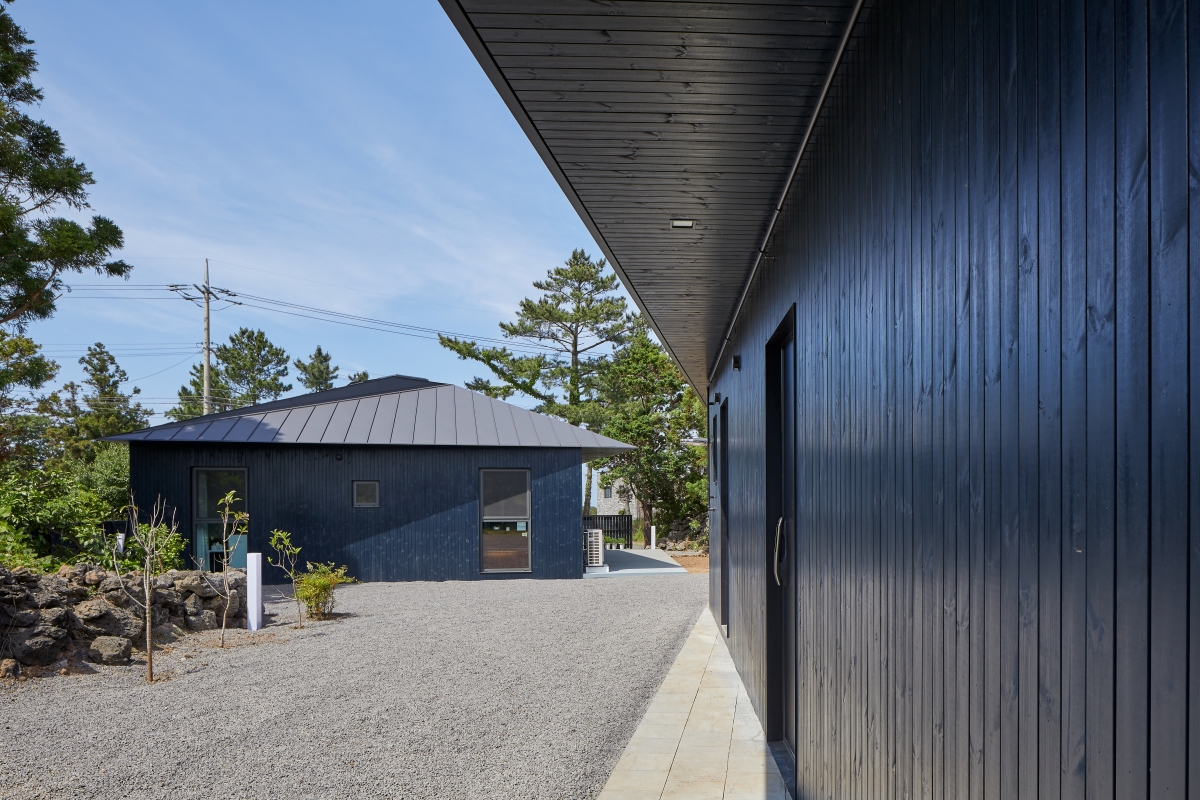 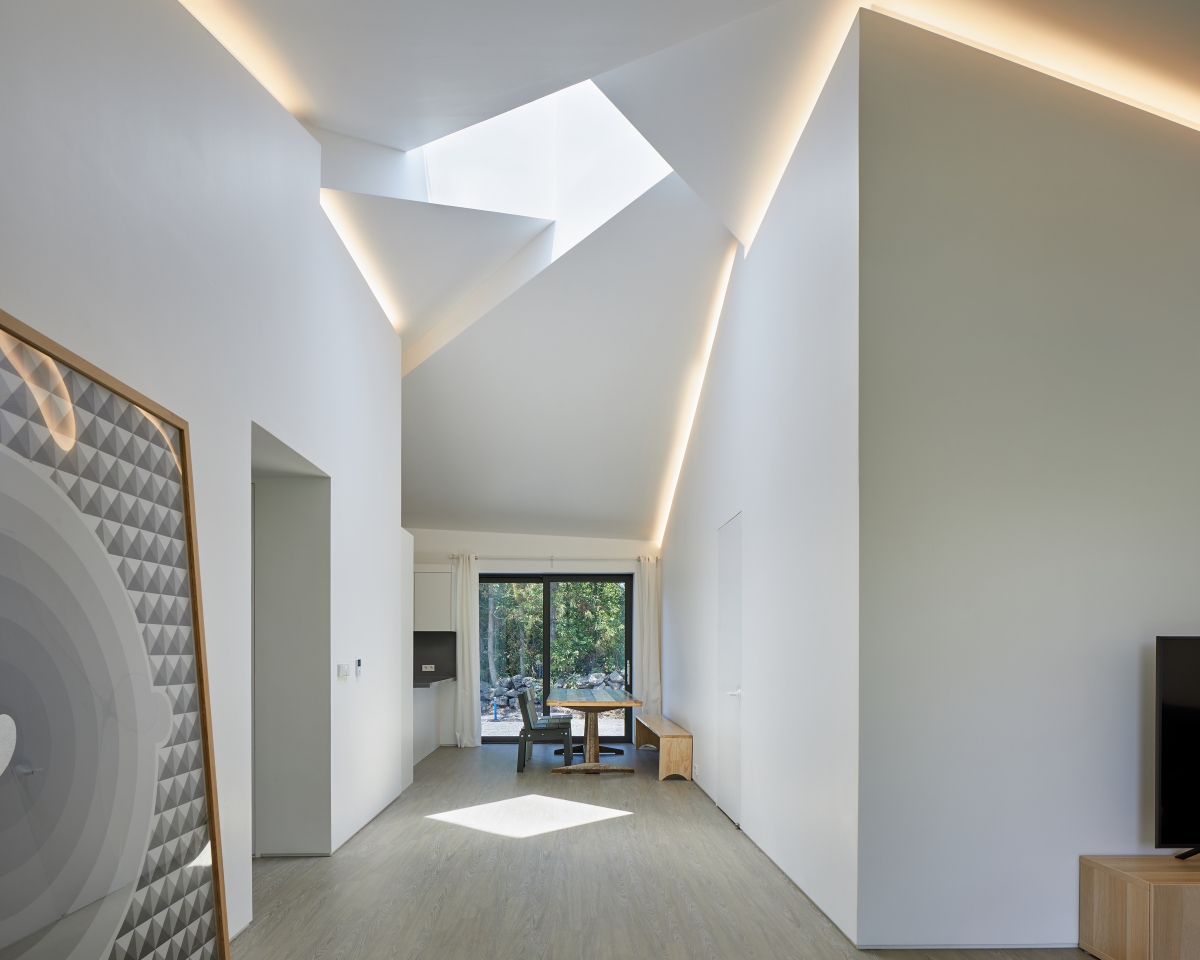 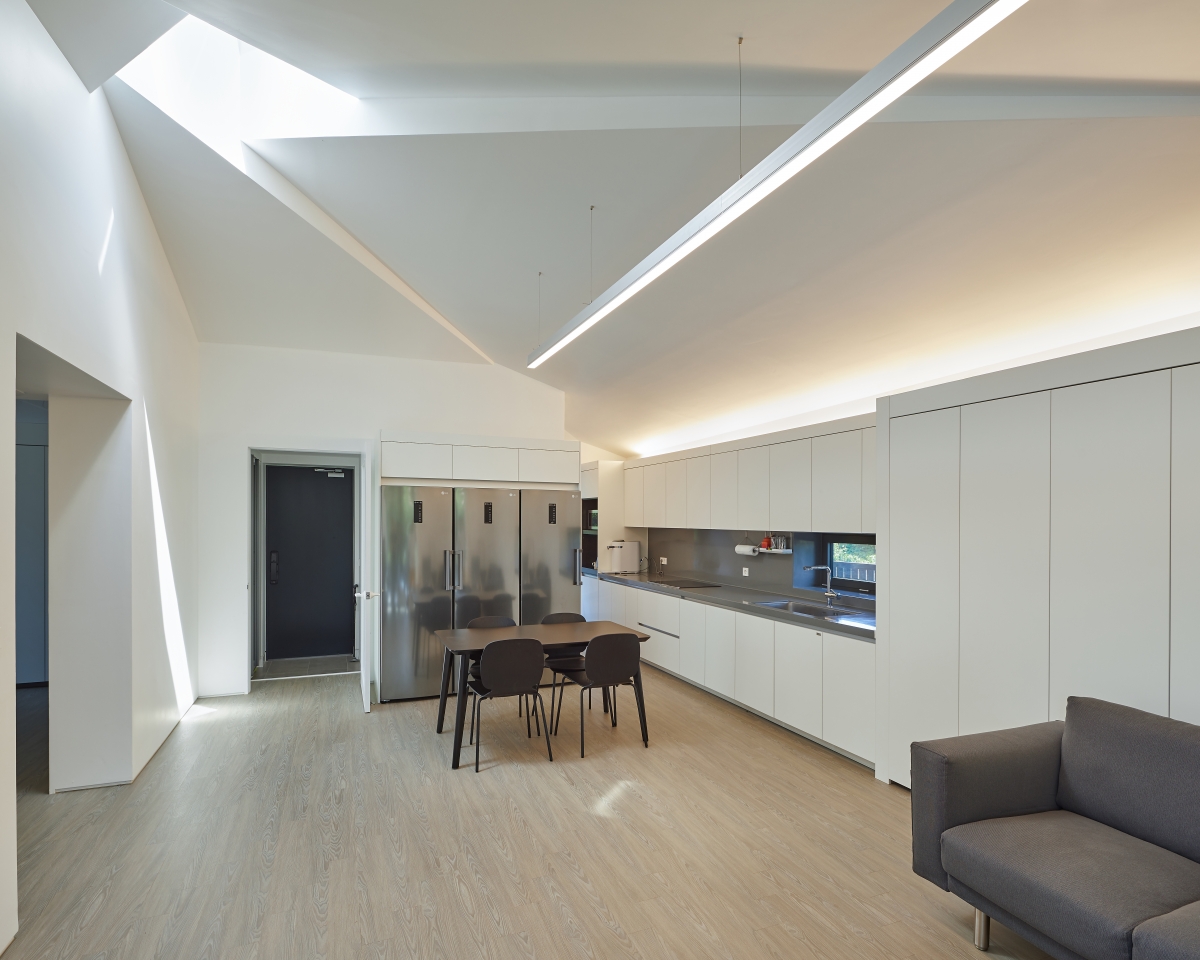 The plane of combined squares is divided into nine sections, and during this process a quadrangle ceiling inscribed in the square at an angle of 45º​ was formed. The four sides of the ceiling were then extended until the ceiling became a quadrangle roof that would stretch to the corners of the outer wall.

Jeon Piljoon
Jeon Piljoon graduated from Hongik University and University College London, and subsequently worked at Llewelyn Davies Yeang and Foster & Partners in London and Beijing. After returning to Korea, He served as Design Director at NOW Architects, and later founded Studio李心田心 with Lee Younjeong in 2016. A registered architect in Korea and an
Assistant Professor in the Department of Architecture at Daegu Catholic University.
Lee Younjeong
Lee Younjeong studied fine art at Hongik University and the Royal College of Art. She awarded the John Purcell Purchase Prize, the artist of the year by Print Belt, and an Excellence Prize at 2012 KCPA. She co-founded Studio李心田心 in 2016, and has since been producing objects for daily use. Also she launched the wooden furniture and prop manufacturing brand 李心田心Design in 2016.
February 2020 No.627 Studio李心田心 Lee Younjeong Jeon Piljoon Triple Square House Kwon Hyungpyo BAU architects Jeju geometry Square skylight
LIST
bookmark_border
favorite_border
27