Between Nature and Shadow​
As the rural population continues to decrease, the likelihood of new housing developments in small countryside villages continues to diminish. One encounters similar scenes in any village one may choose to visit, as even the odd house incidentally built is often completed without a plan and using cheap materials. What remains unchanged in these environments are the natural landscapes and the topography. A such, it has become the norm for architects designing residential projects to approach the issue more carefully, contingent upon the terrain or the ecosystem, incase a house may ultimately feel too different from its surrounding neighbours. The woo-mul designed by B.U.S ARCHITECTURE is a house for a client who has moved to a village not far from a nearby city to which She will commute for work. The client, a prior long-time resident of an apartment block, desired a spacious yet easy to maintain garden—the architect responded to this demand through a design approach which adds a sense of freedom to the height and form of the house’s ceiling.
Inter-space
The woo-mul is located at the foot of a slope, which guides the eyeline as one enters the narrow road. The architect was conscious of particular site conditions, by which the house could easily be seen due to an absence of surrounding buildings, and as such designed the house as one floor, intending the structure to remain discrete among its neighbours by selecting carbonized red pinewood for the external finish. Carbonized red pinewood acts as a neutral façade set in the landscape during the day, while creating a shadow effect by hiding itself in the darkness of night.
In this passage way to the parking lot, the house remains hidden as a result of the inclined landscaping and the garden wall located on the front, and this visual device plays the role of modulating the time and distance it takes to enter into the house by not revealing its destination straightaway. While the time it takes to enter the parking lot is not ample to fully appreciate the garden and the landscaping, it is sufficient for the client to understand passage as a space of transition until one reaches ‘home’. Such a space does not tend to exist in approach to apartment blocks. The variety of devices which hide the house instantly narrow a visitor’s line of sight visitor directed towards the porch, creating an ‘inter-space’ of spatial transition. This ‘inter￾space’ embraces the woo-mul with the pine tree forests as a background, as the house seen from this point emerges almost like a windowless, massive abstract object. If one follows the path of stone materials installed on the floor, one can catch a glimpse of the dipped façade beyond the large windows installed in by the kitchen and dining room. This space is an ‘opened court’, which prompts a sense of curiosity towards the spaces to be revealed, as a signature method of expression used by B.U.S ARCHITECTURE. The external wall of the inter-space, as it greets visitors, is characteristic of an object without a specific role, and if it had not been inserted, the gaze of the visitor from the porch would have been dispersed, weakening the overall sense of composition.
Opened Court
The porch of the woo-mul maintains a calm and composed attitude. This front door, which elicits no emotional intensity other than as a simple exit, makes one anticipate a turn of events from the inside. A sink can be found upon opening the door, placed for its necessary function for the client when entering the house after finishing up outdoor activities, such as working the fields or tending the garden. Upon arriving inside, one first becomes aware of the tall ceiling, a height not typically found in a residence. This offers a sense of space clearly disparate from that offered by apartments which are commonly composed of a living room – dining – kitchen (LDK), giving the impression that the space feels more like a commercial space. The kitchen, dining and living room are naturally separated as lines meet with curves. While the dining area and living room are spatially connected, the two are visually separated on the floor plan at the starting point of a curve. This intersection, which reveals the relationship of the two functions, is characterised by the feature of the ‘opened court’ effect in front of the living room. The courtyard plays the role of connecting the natural landscapes and unique light of the Amisan Mountain with the curved surfaces of the interiors, all of which are finished with stainless steel mirror. This curved surface creates a internal space flooded with light as it meets the ceiling. The direct lines on the exterior of the house and the curving courtyard, the carbonized red pinewood which absorbs light as it is constructed on the exterior, and the stainless steel mirror of the courtyard reflecting light; all of these materials and vocabularies in juxtaposition are intricately connected to maximise their visual impact, resembling the means by which woo-mul has settled into this village.
This method, which shies away from displaying the external qualities of the building too prominently and exhibits a diverse range of natural landscapes through the modulation of the floorplan on the interior, signifies the careful consideration of the architect towards the project’s surroundings and the methodologies with which they wished the project to gain a sense of presence. The client has said that an annex will be built next to the woo-mul, and it remains to be seen how the to-be extended residential area will connect to the existing project. 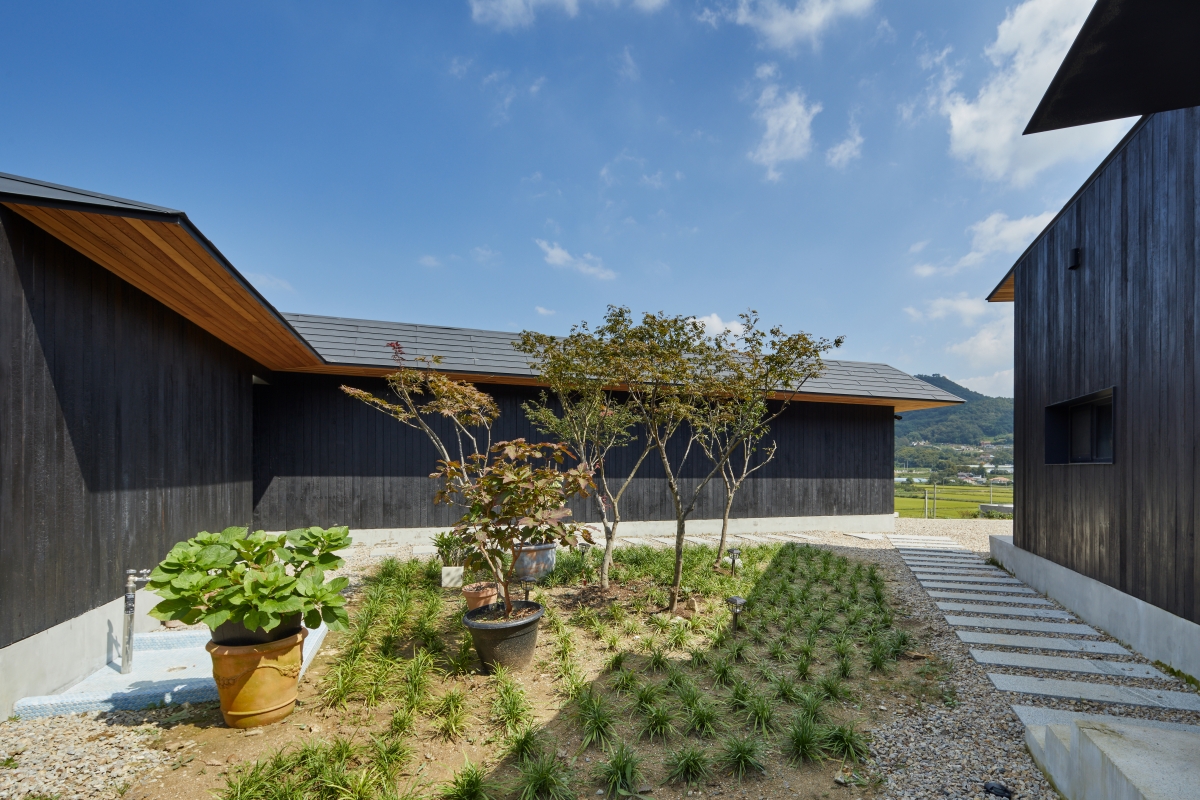 The external wall of the inter-space, as it greets visitors, is characteristic of an object without a specific role, and if it had not been inserted, the gaze of the visitor from the porch would have been dispersed, weakening the overall sense of composition. 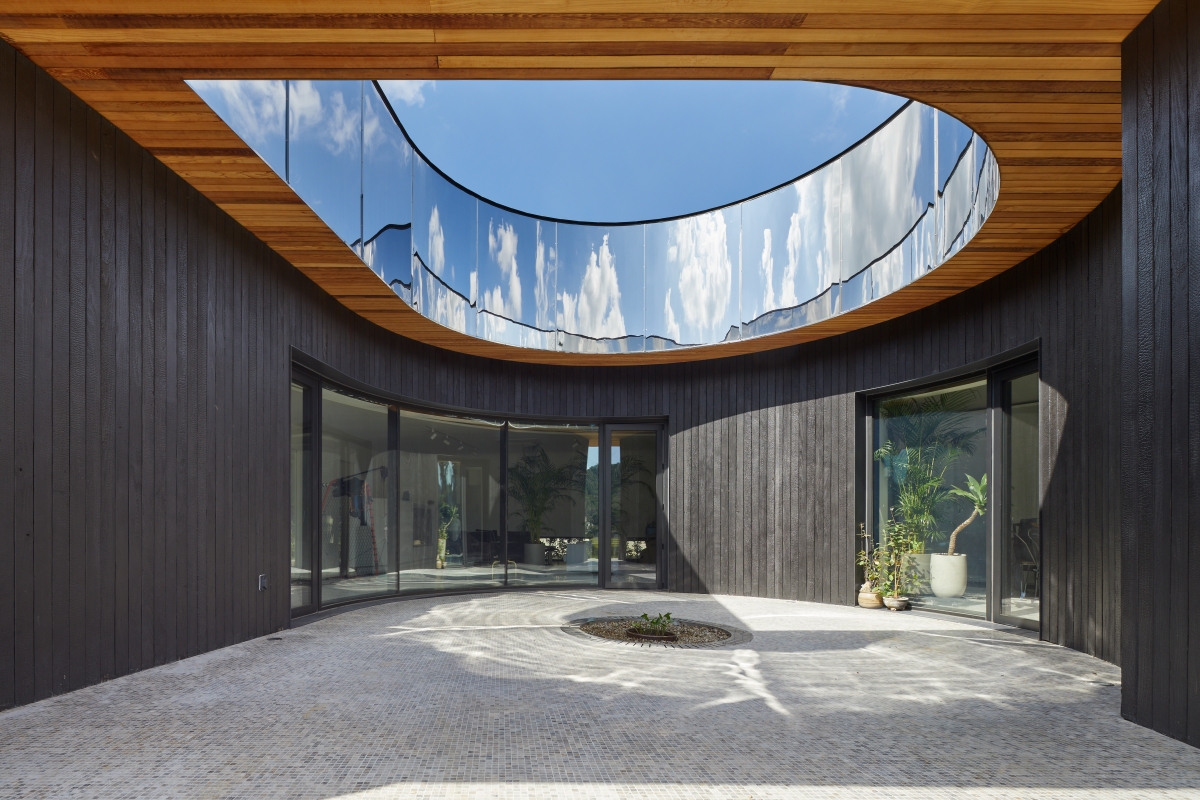 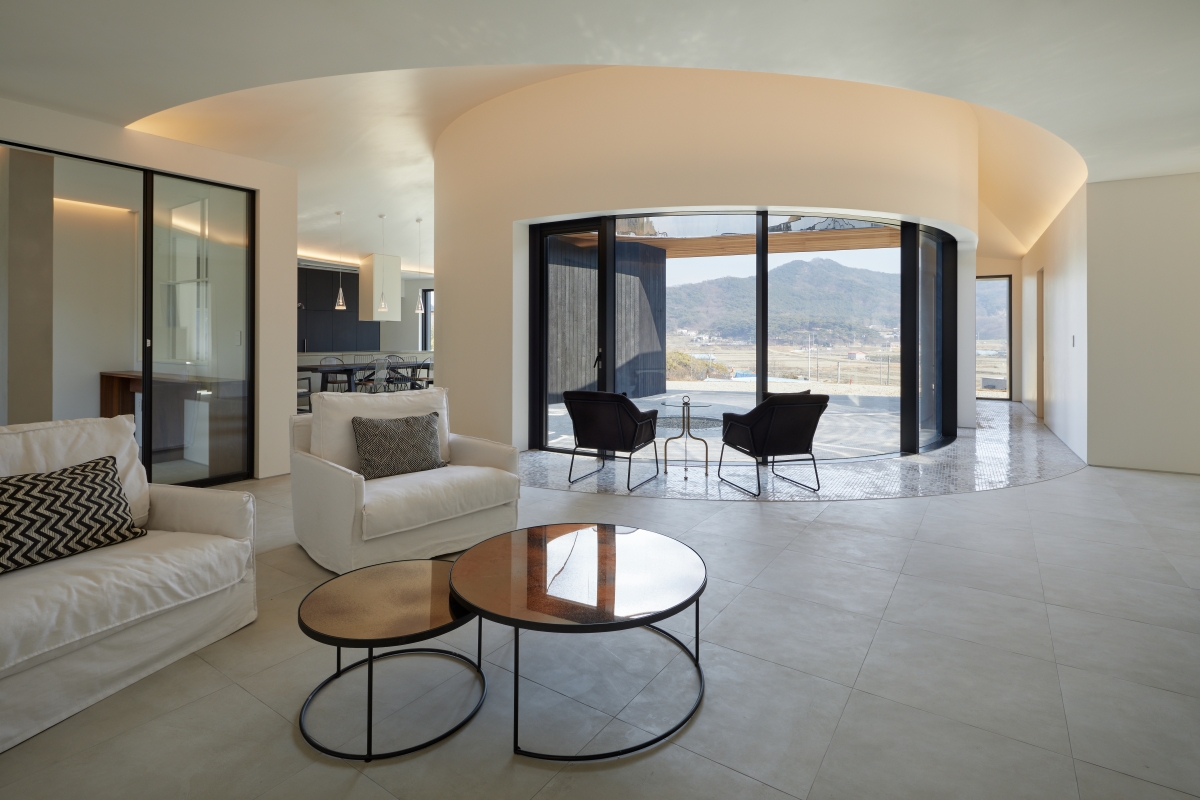 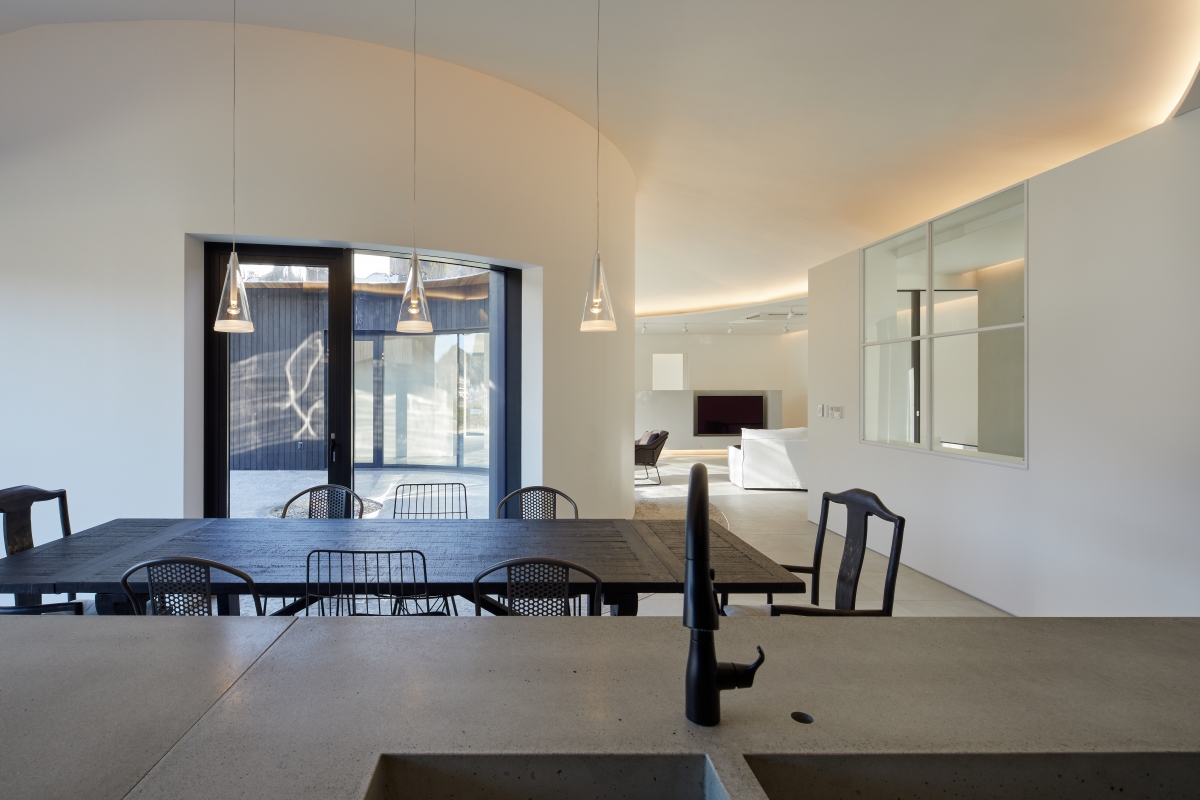 The Intersection of kitchen, dining and living room is characterised by the feature of the ‘opened court’ effect in front of the living room. The curved surface of the interior creates a internal space flooded with light as it meets the ceiling.

Park Jihyun, Cho Seonghak
Park Jihyun and Cho Seonghak studied together at Soongsil University School of Architecture, and co-founded B.U.S
ARCHITECTURE in 2012. B.U.S ARCHITECTURE focuses on establishing a variety of relationships between city, culture and people based on meaningful imagination that could occur through architecture and spatial relationships as mediating devices, continuing a series of projects which focus on process rather than construction in architecture.
B.U.S literally means the intention to communicate from the sense of the word ‘bus’, and the methodology promoted by B.U.S as an ‘undefined point of departure’. The representative projects include woo-mul, sslmo-eui-balgyen, Jinju bit-bang￾ool houses and the Mapo thumb-up building. 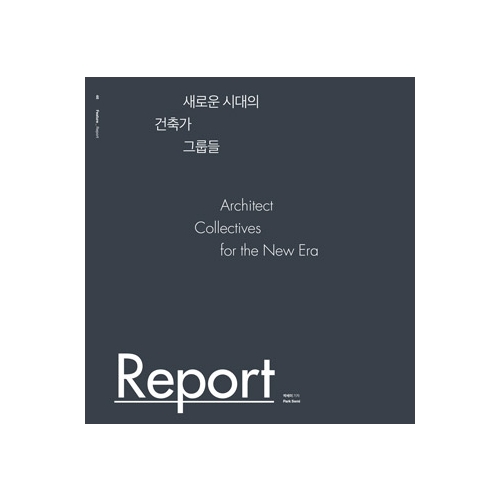