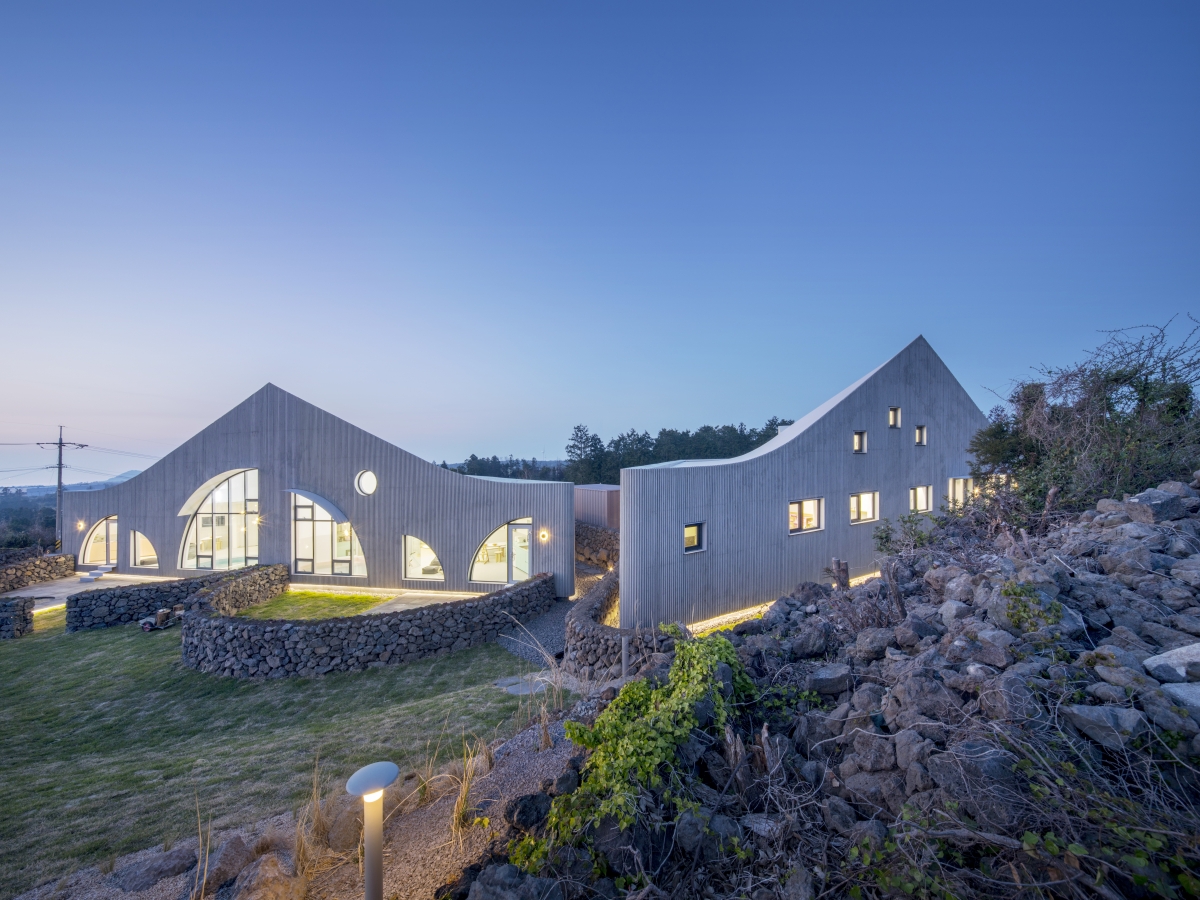 Element Game: An Architectural Statement for the Public

Peter Eisenman has raised sharp criticism of the Venice Biennale 2014, the year the festival was directed by Rem Koolhaas. The gist of the criticism is as follows: ‘“Elements of Architecture” was like a language without grammar. Any language is grammar itself. If architecture is a language, elements are not as important. Through the Biennale, Koolhaas deliberately displayed architecture without grammar’. If we take away this rather emotional reading of the situation, we note a large rift between Koolhaas’ statements and Eisenman’s orthodoxy.

In architecture, grammar is established through the succession of or a resistance to history, and the work of an individual architect is based on one’s independent attitude on that historicity. In contrast, Koolhaas’s statement is a framework for a public who is indifferent to the historicity of architecture. From the viewpoint that contemporary architecture is conscious of a public that desires structure and settlement informed by instinctive survival, and as a meta-perspective beyond elitism, the exhibition chose to exclude the historical context, disassembling it across individual elements, and organising them in an arrayed manner which would explain the fundamental foundations that architecture challenges.

Designed by YOAP architects, Stay in Sunheul reveals how they typically deal with their projects, from the fundamental basis of an architecture that needs to communicate with its public. The geographical features and existing buildings of multiple layers and levels that are specific to Jeju Island’s farmland create a detailed regional context, but the architects and their buildings display a will beyond the unraveling of context. When Stay in Sunheul is deconstructed into its architectural elements, you can clearly read the specific intentions for the individual elements.

As one gets closer to the building, the roof catches the eye. It is evident that the roof has been pulled up at the rear of the building, as a collar is pulled up, conscious of the view when it is seen from a distance. However, the roof is finished with a concrete frame without any special materials, creating a smooth surface from the perimeter of the building to its highest point. They are the minimum measures for rainwater treatment and waterproofing. The volume of the building was conscious of a particular direction, but the surface of the roof that forms the volume does not need to stand out in and of itself. A distinctive characteristic is a parapet, which protrudes from the roof along the perimeter of the building.

The parapet is a functional element that attends to rainwater, preventing water from standing stagnant the building and flowing down the exterior walls. It is not a factor that greatly impacts the look of the building. However, the placid roof finishing materials and the parapet that protrudes from the roof’s shape draws greater attention than the elaborately built exposed concrete finish that surrounds the entire building. From inside the roof, the parapet is a jaw to block rainwater, but from the outside, it is the end of the façade. In Stay in Sunheul, the height of the parapet is proportional to the overall height of the façade. In that regard, the height seems rather ambiguous, shortened in the process of adjusting the roof’s surface with plain concrete, and leaving something to be desired during the construction phase. What if the inner side of the roof at the parapet was finished with the same finish as that of the exterior wall?

As one enters the building, following the exterior wall from the main entrance, one finds the façade at the point at which the roof is highly lifted. The façade has a clear frontality, even though it is a continuous wall without pointed edges. Although the building’s volume seems like a fence made of paper, the façade is independent at a specific position. It is an effect created because of the exterior wall, which emphasises verticality while excluding all elements, and the roof. Although it is enclosed, the surface is iconic, because it stands out due to the independent façade that has a distinctive bilateral symmetry while having only a single lifted point. It is especially effective in terms of the longdistance rural landscape of Jeju Island.

There are quarter-circle-shaped windows on the façade. The windows were formed by cutting into the exposed concrete exterior wall, which was made of formwork with rectangular lumbers added then carefully made according to a fine unevenness in the vertical direction. The thought of a square window is problematic. The reason behind creating the circular window was probably due to a building programme that is dedicated to the children’s space. Regardless, they add a three-dimensional effect to the vertical façade. It seems that the iconic exterior from the distance view was meant to be felt equally from the inside when looking to the outside.

The plan cannot be considered as an architectural element, but it is in accordance with the direction of the roof raised and the composition of the facades and windows. Perhaps the windows on the façade were designed first, then the plan was adjusted based upon it. In that sense, the overall impression of this iconic-looking building, which is constructed with simple combinations of shapes, seems to have been directly applied to the composition of the plans. 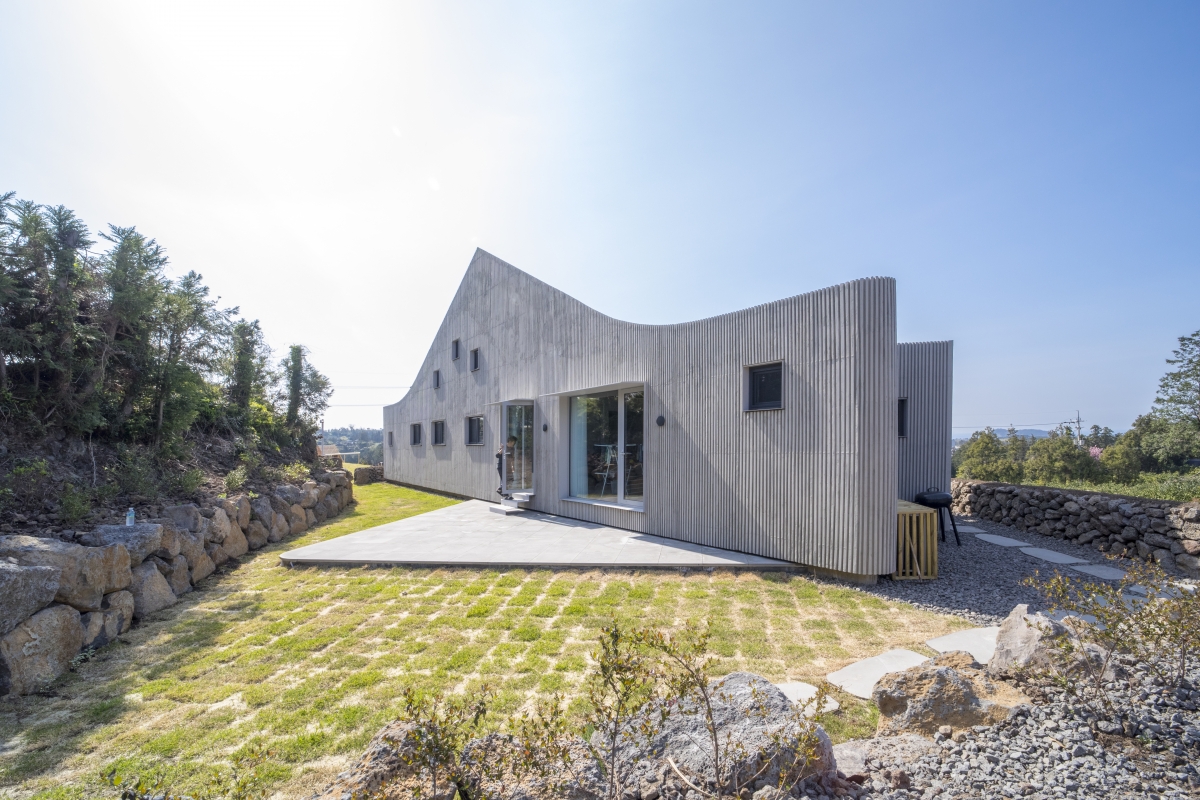 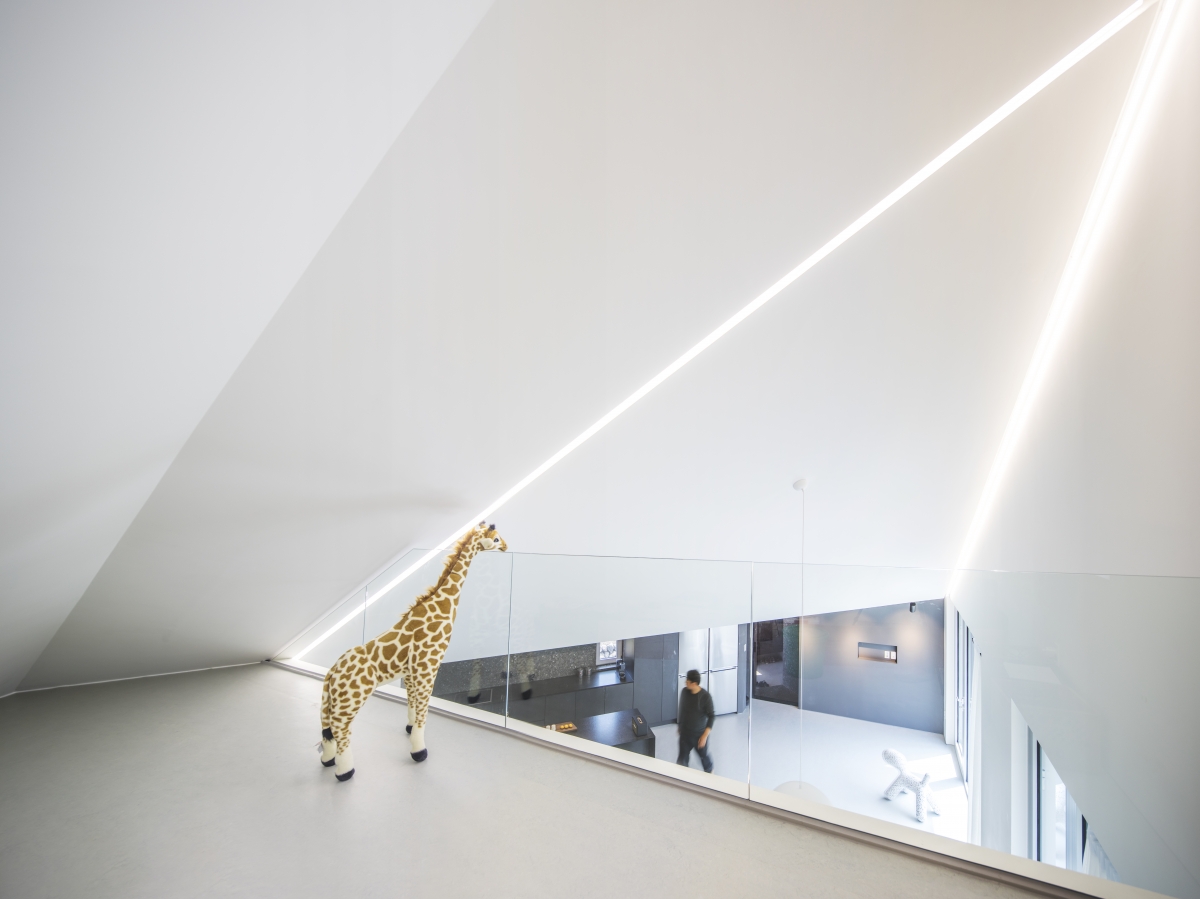 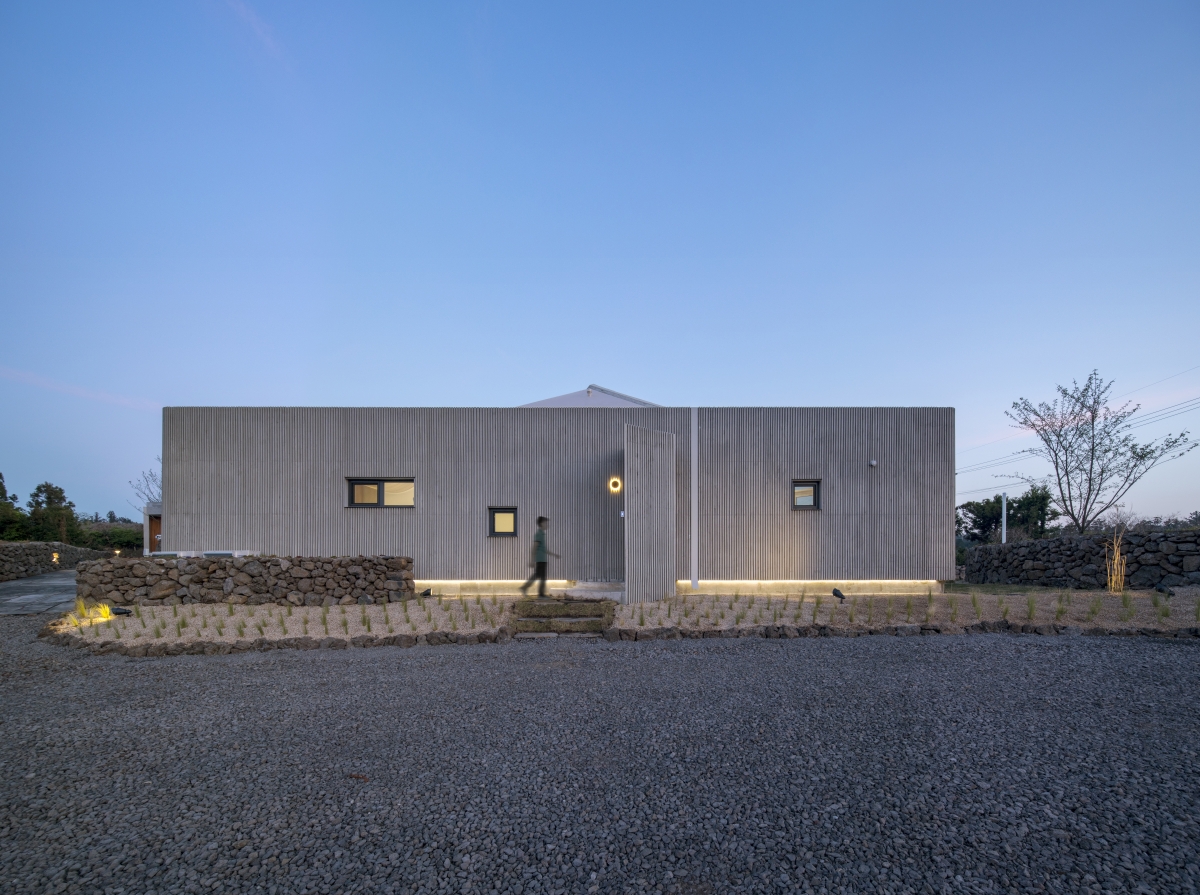 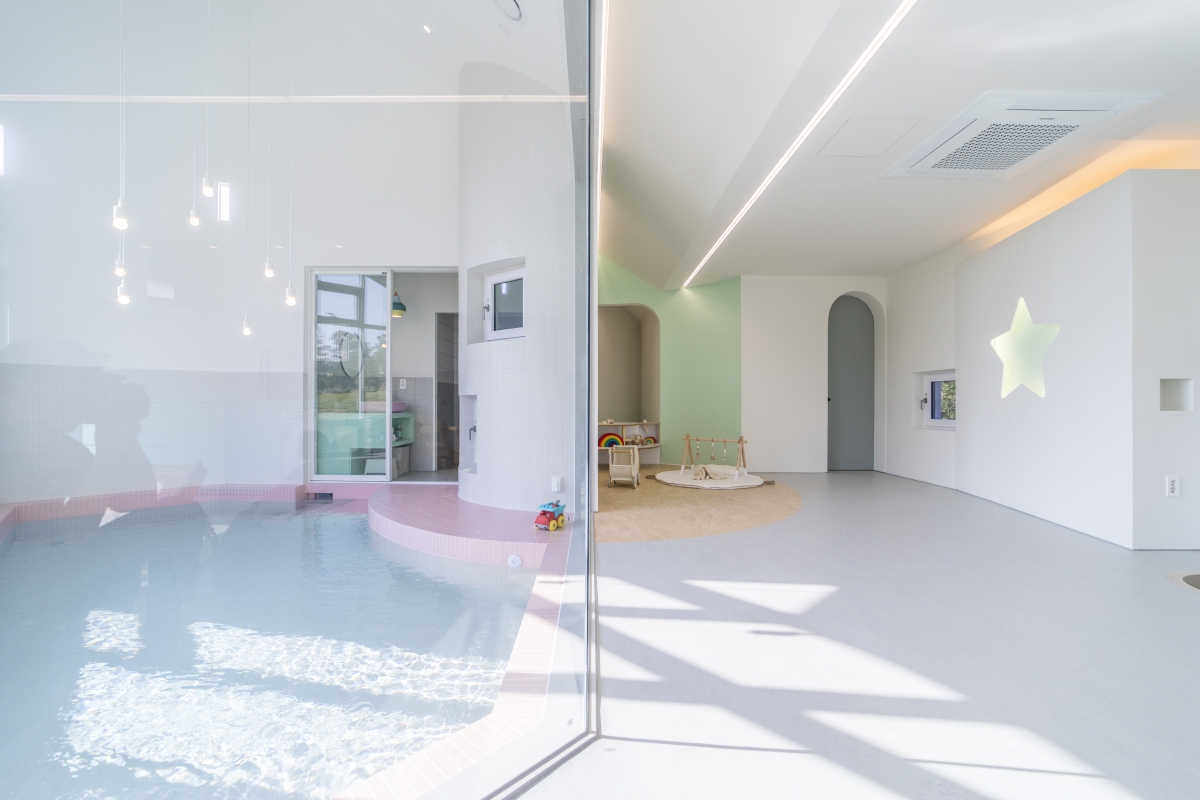 Ryoo Inkeun
Ryoo Inkeun spent his formative years practicing as an architect at Space Group. He co-founded designband YOAP in 2013 and is now Chief Designer of YOAP architects with Kim Doran and Jeong Sangkyong. He has received KIA Awards and was awarded the main prize in the Korean rural architecture competition. His work includes Yoap white house, cornerstone, 淸風來故人, 1×4 house, Anyang social housing, and Hwaseong social youth housing.
Kim Doran
Kim Doran received her bachelor’s degree in Architecture from Hanyang University. She practiced as an architect in Space Group and began her own practice, Studio BBeum, in 2012. She co-founded designband YOAP in 2013.
Jeong Sangkyong
Jeong Sangkyong completed her bachelor’s degree in Architecture at Hanyang University, and received her master’s degree in interior and spatial design from the University of Arts, London. She has practiced as an architect in Space Group, Young in Architects London, MKPL Architects
Singapore, among others. She is an adjunct Professor at Kyungpook National University and the director of the Yeongcheon urban regeneration center.
No.625 December 2019 YOAP architects Stay in Sunheul Jeju Island single house private cottage residence pool kids archiectural elements roof parapet facade window plan Lee Chihoon SoA
LIST
bookmark_border
favorite_border
19