Between Sacred Place and Public Space

Seosomun History Park, which for 400 years following the mid-Joseon period was used as an execution ground to put state prisoners to death, is a place of great sorrow. From the Sinyu Persecution in 1801 to the Byungin Persecution in 1866, it was a place of Catholic persecution in which numerous Catholics who refused to deny to their faith were executed. In memory of these atrocities, firmly establishing this place as a sacred site in Korean Catholicism.

Although this place was designated as a Neighborhood Park in 1973, it became a neglected area with blocked access due to the Gyeongui Line railroad and Seosomun Overpass. In addition, a recyclable waste treatment facility for Jung-gu and a public parking lot were constructed in the lower reaches of the park, revealing that the site can no longer continue as a resting space for citizens.

A place shared by everyone is not where all regional characteristics are diluted and become indiscernible, but where all display their distinct values together so that everyone can share that unique ambiance. Therefore, conveying the message riven through the land of this place ― as a sacred place of Korean Catholicism ― is the most effective way for this place to be reborn not only as a Catholic sanctuary but also as a valuable place for the citizens of Seoul.

The relationship between the ground and the underground are a mainstay behind the important architectural concept of reorganising the four-stories and 11,000-peyong of underground public parking space ― which was built and has been used since 1996 ― to construct a historic monument. An inseparable relationship has been established between the memorial park, which displays contemporary public values, and the underground historical museum based on that park. That relationship became a vital starting point for the spatial flow that crosses above and below ground.

The design was organised according to a number of central aims: to clarify the existing boundary between what is inside and the outside of the park, to express the monumentality of this place through an emptied central area, and to encourage citizens to enjoy various activities within its perimeters. In other words, the park was supposed to be enclosed by a wide green area, while the square’s walls and core walls of the underground history museum would be exposed to create an emptied memorial plaza that would imply the presence of the underground. Then the 33m-high memorial tower adjacent to this memorial yard was positioned, creating the natural relationship between the park’s ground and the sky so that the line of sight could be directed towards the sky. While the rich green scenery forms a backdrop to the busy streets outside the park, the site’s identity as a memorial park is made more overt through the memorial tower. In addition, the border of green space has been designed as a circular promenade for citizens. However, during the ongoing period of construction, even the memorial tower could not be built due to various unforeseen circumstances, while the design of memorial plaza ― paired with the tower ― underwent an unauthorized alteration and became a field of grass. 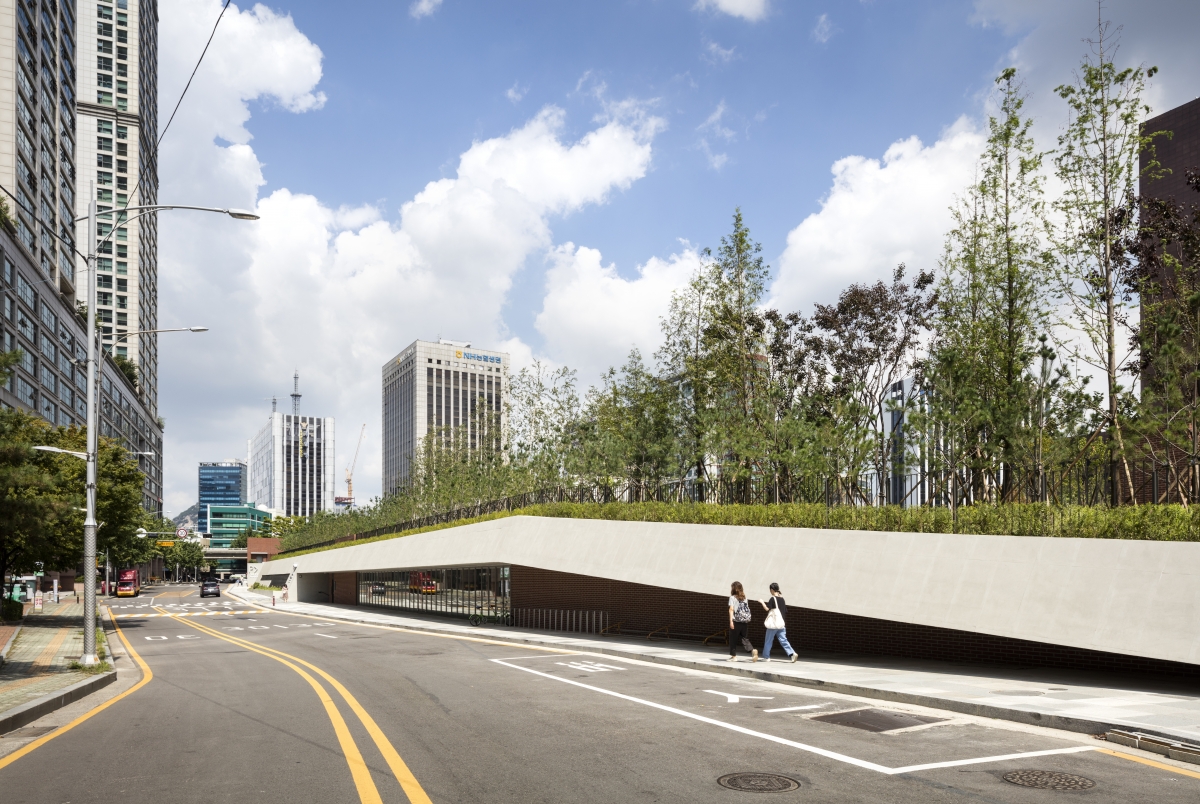 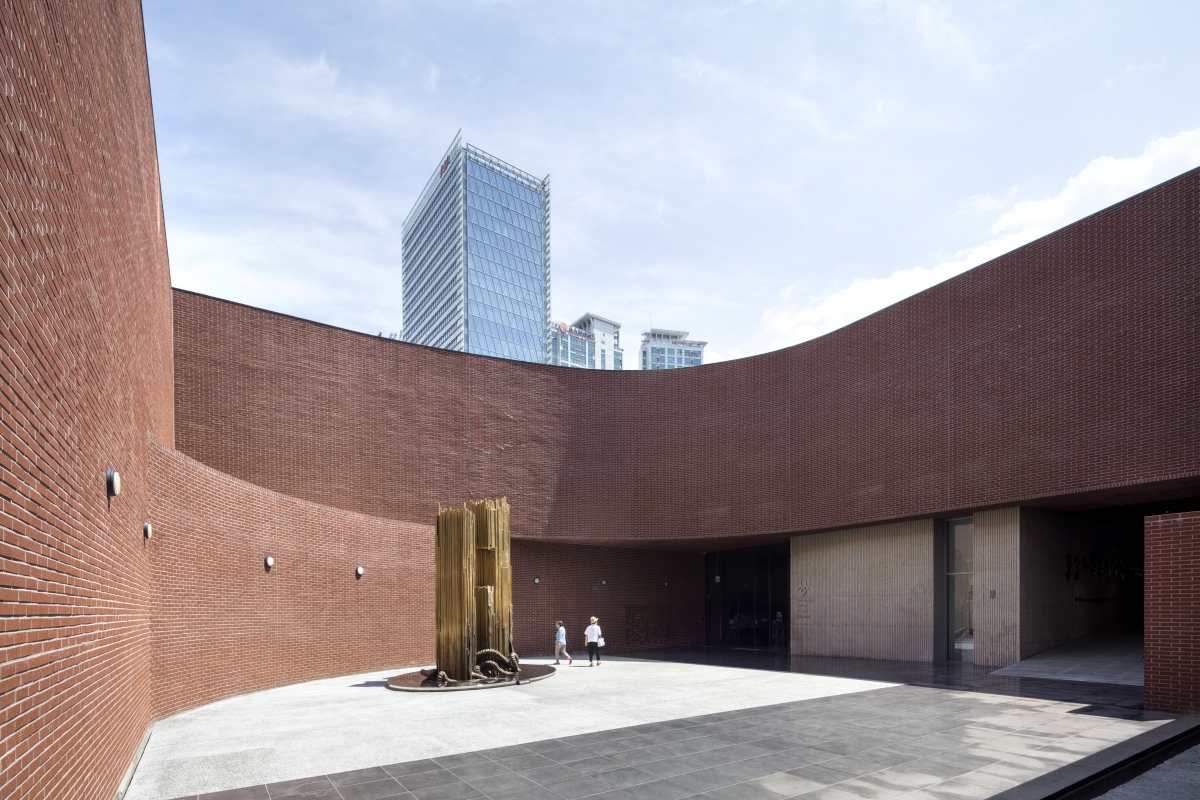 Since the design used a part of the structure of the existing underground parking lot, the 7.5×8m module ― which was set with sole consideration of the efficiency of the parking space in mind ― became the standard measurement for the grid system in the sacred place’s museum space. These 135-unit cubic grids are composed of a multi-layered structure of two to three stories that continuously expand and integrate, and that unit grid became an independent space with its own status by joining with 1.5x1.5m cross-columns.

The spatial development based on the unique status of the place is dramatized as a process of pilgrimage along a path of 300-metres: starting at the entrance ramp, encircling the Consolation Hall inside the museum, arriving at the sky square, and then following the sky road that leads back to the ground level.

The 30cm-thick exposed concrete of the columns and beams are the structural materials that best reveal the uniqueness of the unit spaces. Bricks that are stacked one atop the other, from deep underground to the upper parts of the park, are not only mediating devices between the ground and underground levels, but also sentimental materials that maintain and perpetuate an ambiance by promoting the uniqueness and flow of each space. This can be defined through the encounter with the unit space according to a strict grid system and the pure space and material that respect the system of spatial development. On the other hand, along with concrete and brick, other natural materials such as steel plate, wood, and stone are used to enhance the nature of the space.

The memorial space dedicated to the full-hearted believers is a 25×25×10m cubic tube that sits like a dark space, set 14m deep in the ground. This space has a clear borderline but welcomes everyone, designed to let visitors enter mindful of worship in a naturally bowed position through a gap that is 1.5m-thick on all sides and 2m high. There is a small but bright light emanating from a point above, from the sky, to indicate that light spills across the floor of the hall. It was planned as a meeting place, but this Consolation Hall itself, which seems to have an indefinite depth due to the light of darkness, has become the most precious feature of this museum.

On the other side of the Consolation Hall, the square heading towards the sky is in a line. Passing through the Consolation Hall, one reaches the square, with sides of 33×33×18m, are surrounded by expressionless brick walls and that naturally draw attention up to the sky. Although one’s tenuous presence is imprinted on the square’s overwhelming scale, by encountering the sky, such presence becomes a spatial device that is expected to sparkle, where the square stands as the finale space of a climax. 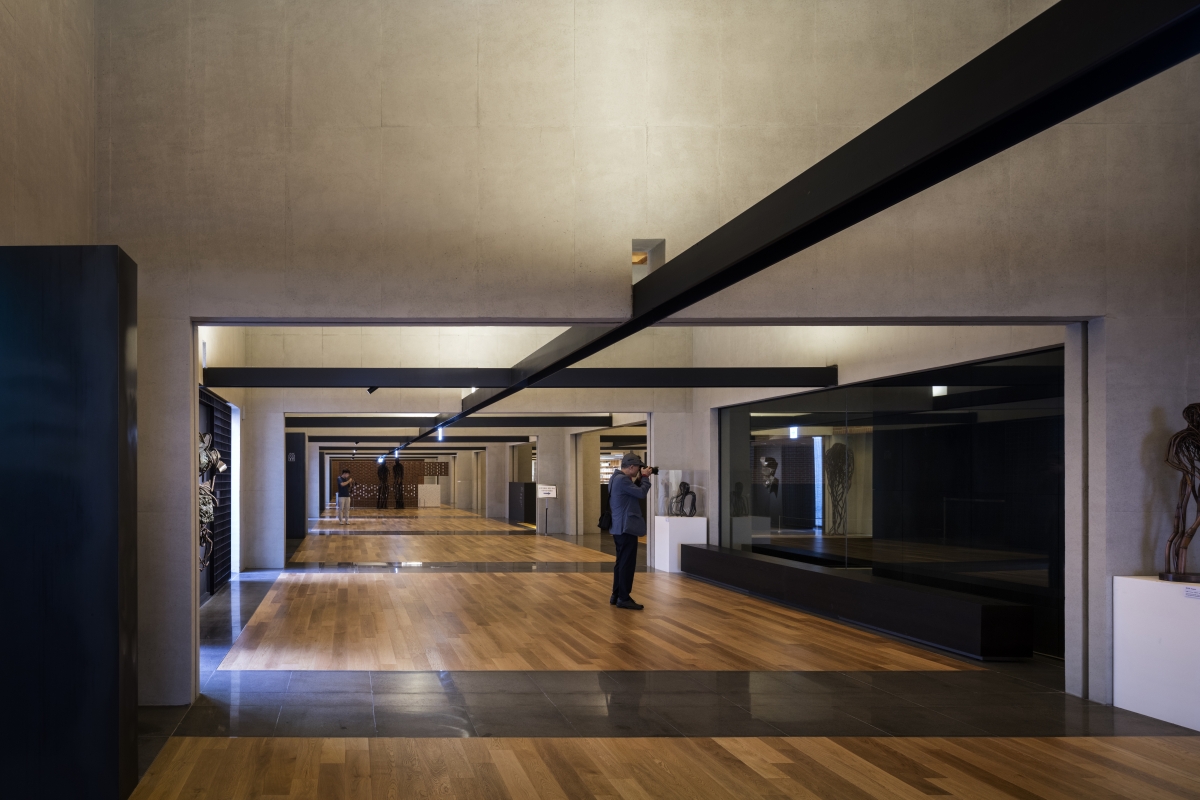 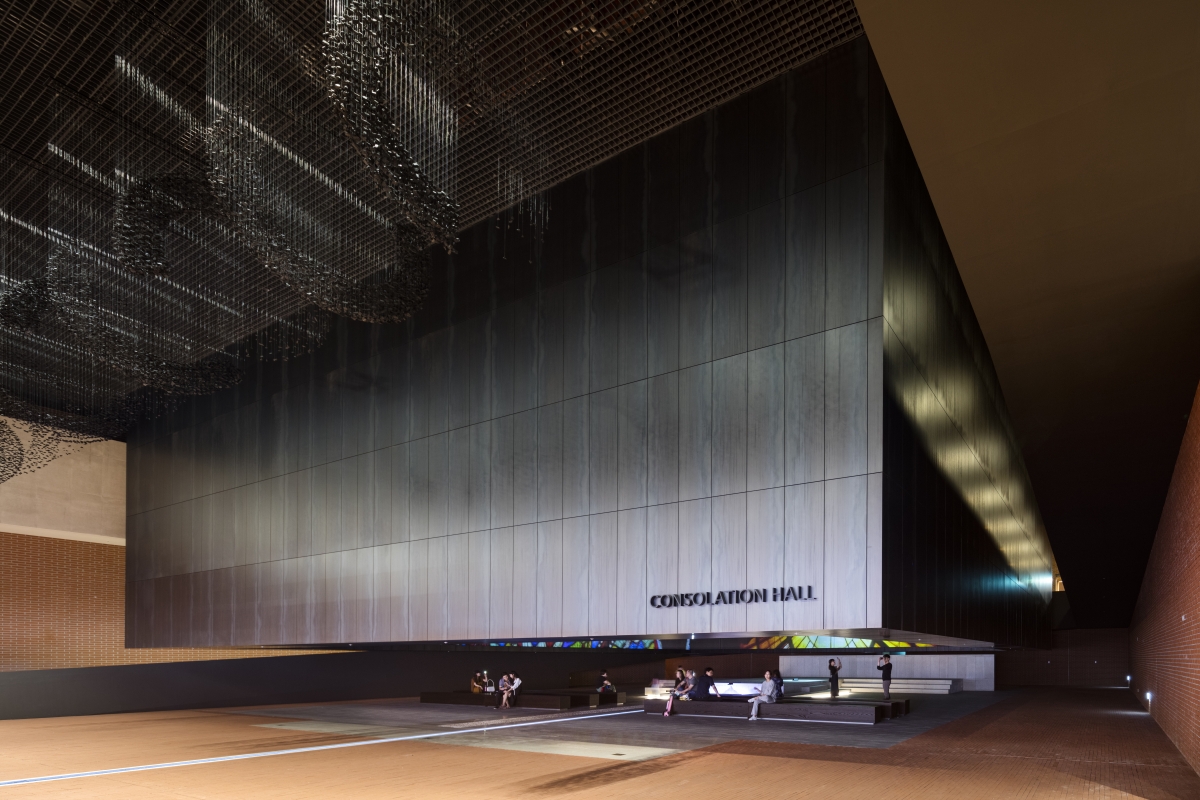 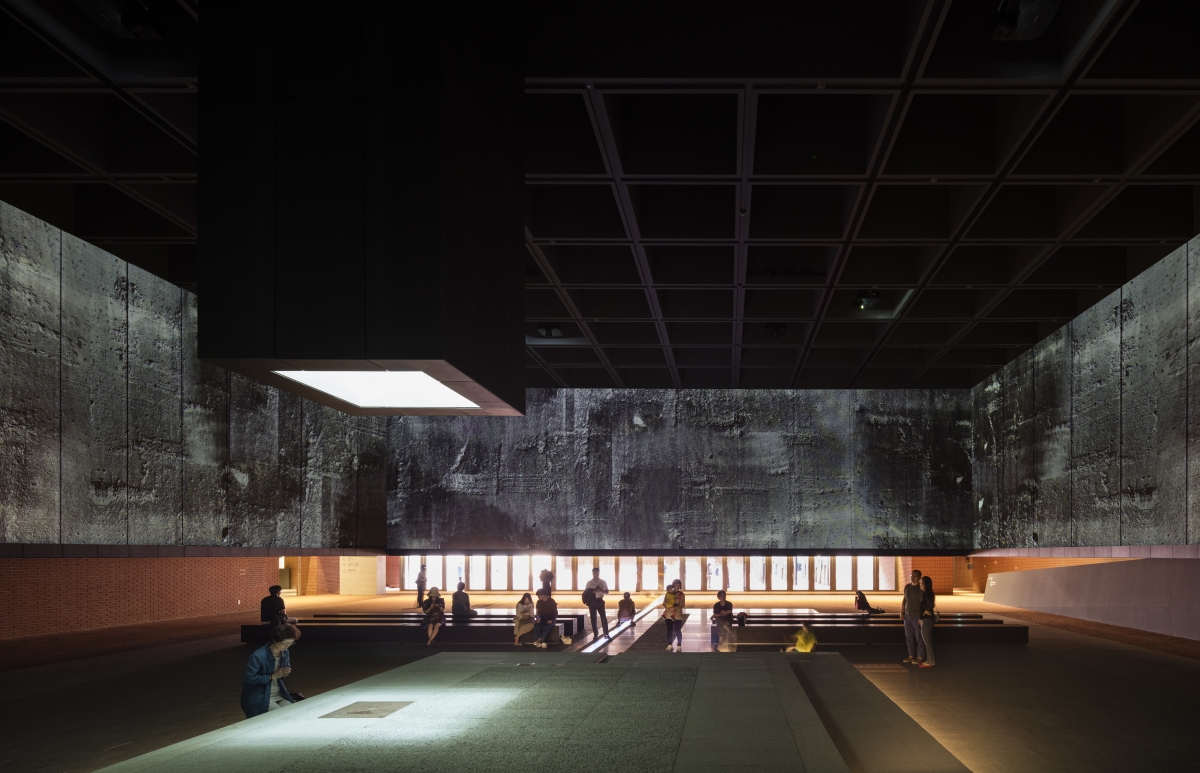 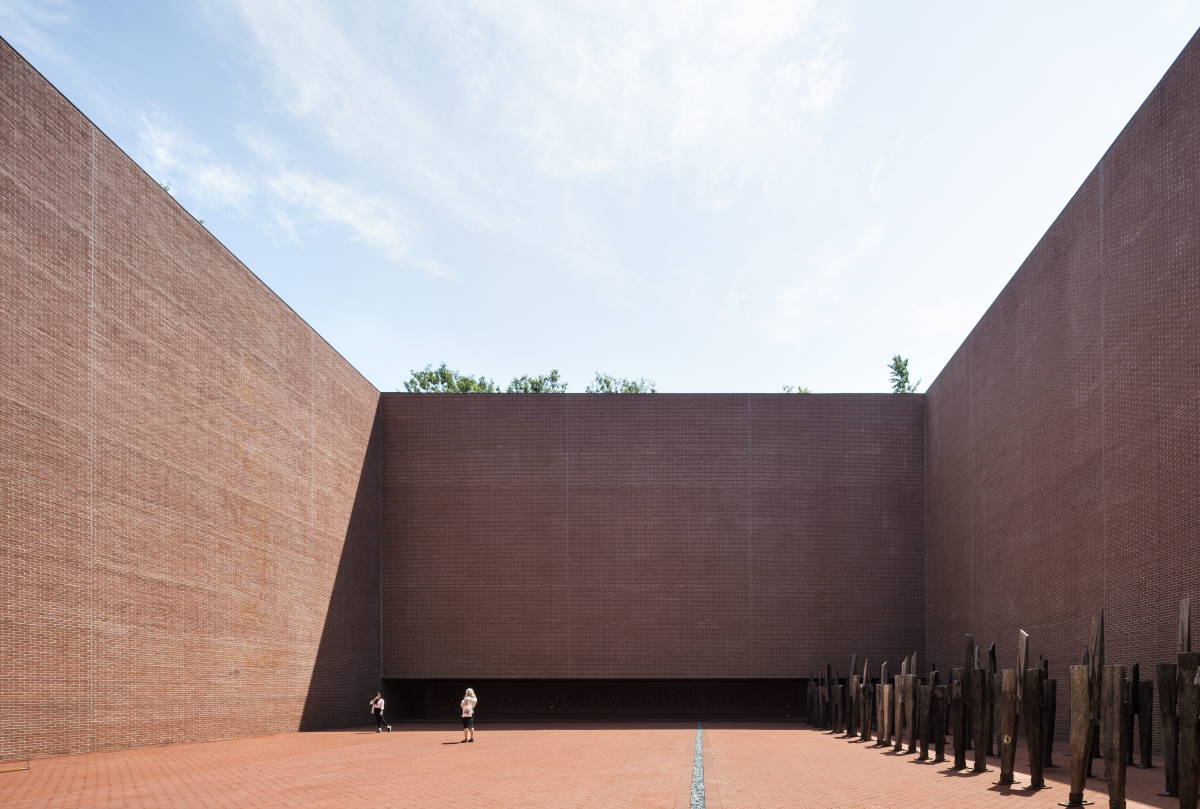 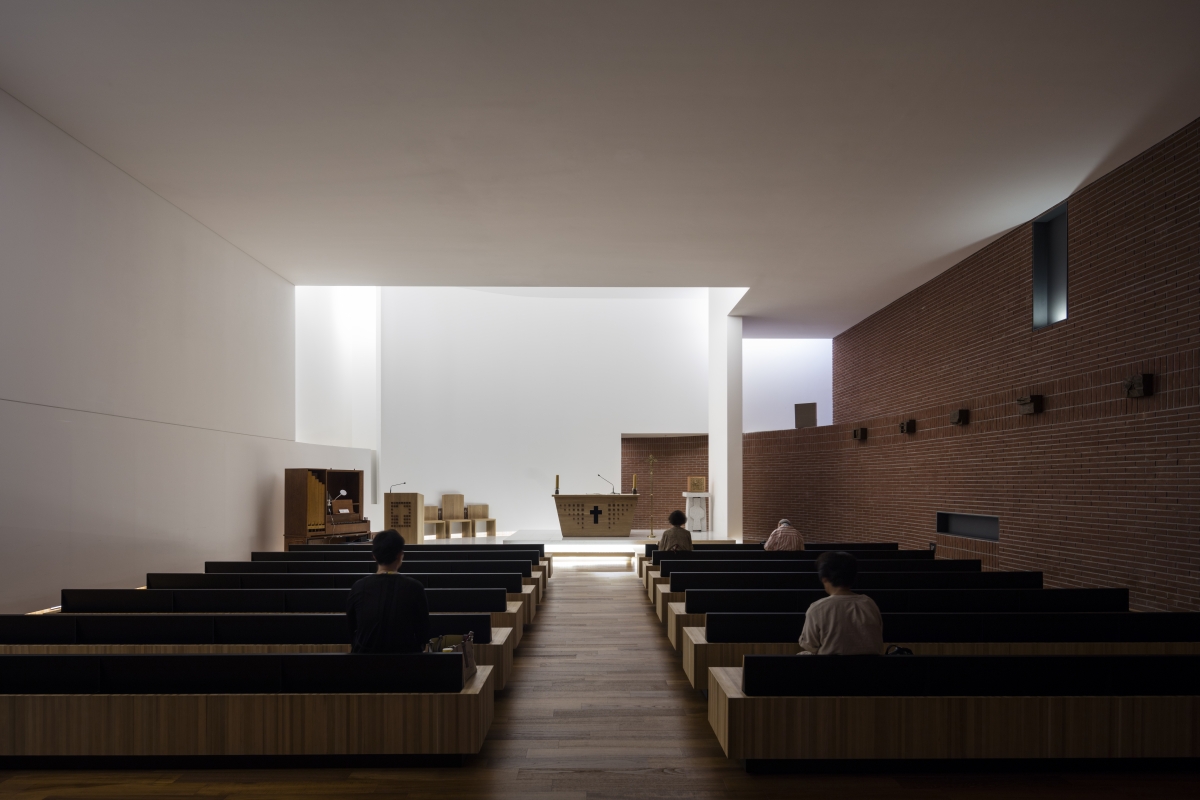 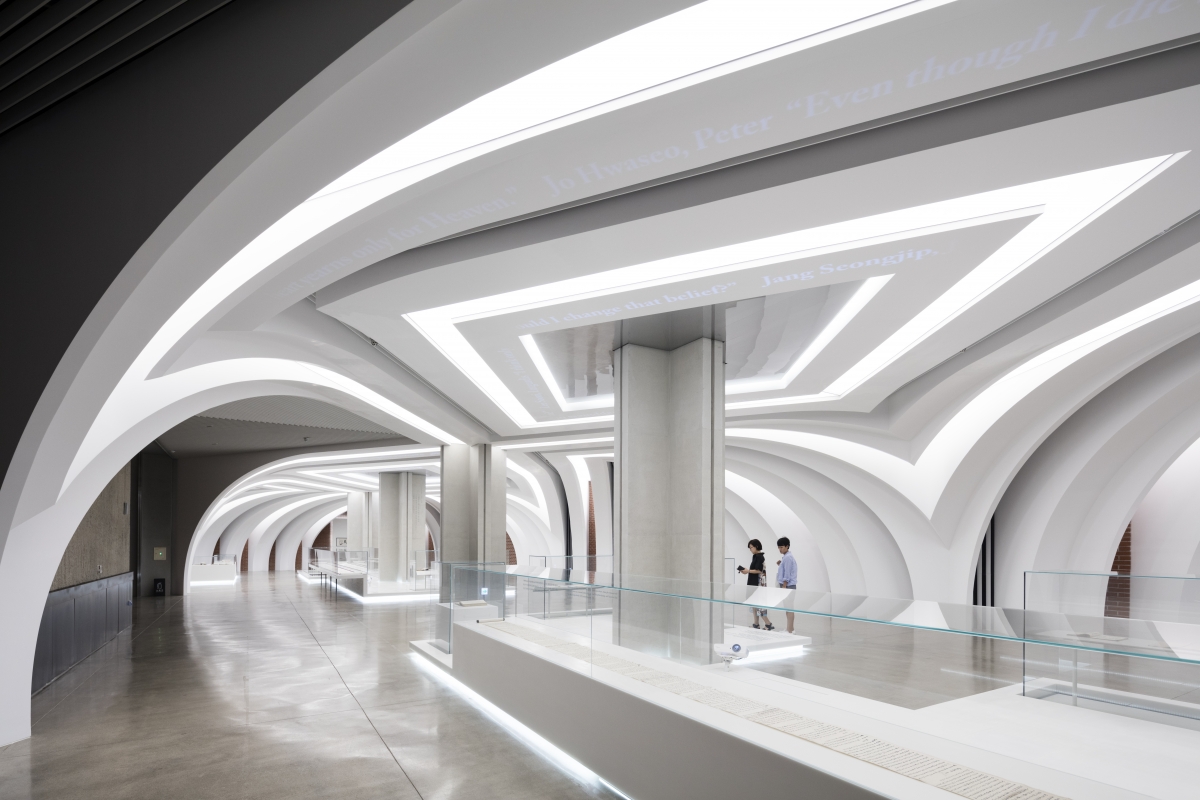 Yoon Seunghyun
Yoon Seunghyun is currently a professor at Chung-Ang University. He opened Interkerd Architects in 2004, and since then he has been working on various projects to realise the publicness of architecture for over 15 years. He also made an effort to create a healthy climate in the architectural community by actively involving in Korea Architects Institute and Public Architect. He has won numerous awards with his major projects including for Bukchon Hong-Hyun, GureumJeongwon Housing Coop, Youngjoo Joje Healthcare Center, and the Dohwa Administration Center.
Lee Kusang
Lee Kusang has been running VOID Architects since 2004, and his major projects include Bundang109, Severance Kindergarten, Residence Hasanun, Guro Youth Cultural Center, SNU Amphitheater, and VIEW CLINIC. He currently lectures at Seoul National University, and he received the KAI Young Architects Award in 2006 and Seoul Architecture Awards Young Architect Award in 2010.

Junseung Woo
Junseung Woo has a wide range of experience at firms including UNSTUDIO (Amsterdam), M.FUKSAS (Rome), and TEN arquitectos (NYC), and he is currently working as the principal in Less Architects. Based on his interest and research in humanities, social studies and science, he pursues changes in architecture and life through developing and applying the geometry and material of space. His major projects include Seoul Frei Waldorf Schule, SM Celebrity Center, H ART VILL, H Entertainment Headquarters Building, and M Street Building Hannam.
LIST
bookmark_border
favorite_border
144