The site is located in the Historical and Cultural Aesthetic Control Zone (hereinafter HCAC Zone) between Gwanghwamun Square and Gyeonghuigung Palace, a place in which a building over four stories cannot be built. Even if it was submitted to deliberation by the Architectural Committee and was eventually deregulated, a building of only six stories or under can be built, and yet the 600m-long road is filled with highrises. There are only two buildings that are four stories or below, and which seem to be considering their potential for development. The first design proposal consisted of three underground levels and four ground levels, in order to use the maximum space available within the given conditions. However, the removal of the HCAC Zone was announced. How it would change was unknown, but it was clear that the restriction on height would be removed. The proposal was re-examined, and it was redesigned as a temporary building premised on eventual demolition. Under the premise of demolition after five years, we looked for a way to reuse certain parts of the building. The structure itself was designed with a steel frame so that it could be dismantled and reused. If it is moved to another location at a later stage, it would be difficult to build in exactly the same form as the beginning, and the layout would become different depending on the surrounding contexts and terrain. The scope of reuse is also limited to the U-shaped vertical members except for the horizontal members, instead of the entire structure. However, depending on where it is positioned, it can be restructured according a new method by varying the spacing and angles of the members.

The site is located at the highest altitude on Saemunan-ro 3-gil. As a way of treating the terrain in which the lowest points and the highest points are about 2m apart, the location of the building was drawn back from the road and the retaining wall was installed, settling the structure into shape. A front yard was created alongside the road. The retaining walls and stylobate were designed to be in reinforced concrete because they would be difficult to reuse, but the structure placed on top of them was designed in steel frame so that it could be reused when possible. Frames are arranged in a repeated formation, surrounding the square-shaped site. A courtyard, backyard, and service passage have been formed to occupy the in-between spaces on the outside, while a linear circulation path is created on the inside. The volume facing the front road appears to be floating on its retaining walls. At the same time, the shape of the frames changes as if it is rising, embodying the peak of Bukak Mountain that appears at the north side. As one passes the front yard and walks up the stairway next to the retaining wall, the threelevel courtyard slowly reveals its presence. In response to the courtyard, the levels of the interior space also change. The frame gradually opens towards the direction of the doorway, forming the entering instrument, and reaching the interior space where the form of the structure is revealed. The squareshape of the site and the level changes on the inside and outside are reminiscent of the architectural types, the hanok and the pavilion.

Transforming an Empty Lot into a Public Lot

At the time of the initial design, the programme required a space that would accommodate various cultural activities and a space for eating and drinking. We suggested an empty space consisting of three levels, in which many people could gather together and enjoy the exhibitions, performances, and events—with the understanding that the space to be used as a public place. Due to the change in urban planning, the size of the space was reduced, and the projected term of the building became temporary. Yet, the initial idea was carried over. The programmes placed on the inside were moved to the outdoor spaces, such as the courtyard, backyard, and front yard. Moreover, the interior spaces have varying widths and heights, adjoining the exterior spaces through different methods. In the narrow spaces, windows have been lifted up to take advantage of the courtyard, and the wide spaces place a greater emphasis on the changes in interior height, engaging in a visual relationship with the courtyard. At the highest level, a small event space has been arranged for small performances. The space obtained by drawing back the retaining walls to straighten up the terrain was combined with the setback line of the HCAC Zone, serving as an entrance yard as well as a small event space.

Retaining walls were built, the terrain was refined, and repeating frames were erected, forming the space. On a site surrounded by tall buildings, a single-story space with a courtyard has been placed. Its unfamiliar look, different from the surroundings, presented new ideas. It was decided that the building, which was designed on the premise of temporary use, should remove the rhetoric as temporary. Instead, an antiFAR game began to be told. In general, the value that any land holds is proportional to the rewards that it reaps. FAR has become the first priority measure of value. We look at the value that of the land from a different perspective. The empty lot between high-rises has been filled with a public lot, and its value may be the value that architecture creates or the value that space creates. Therefore, the anti-FAR game becomes more interesting. 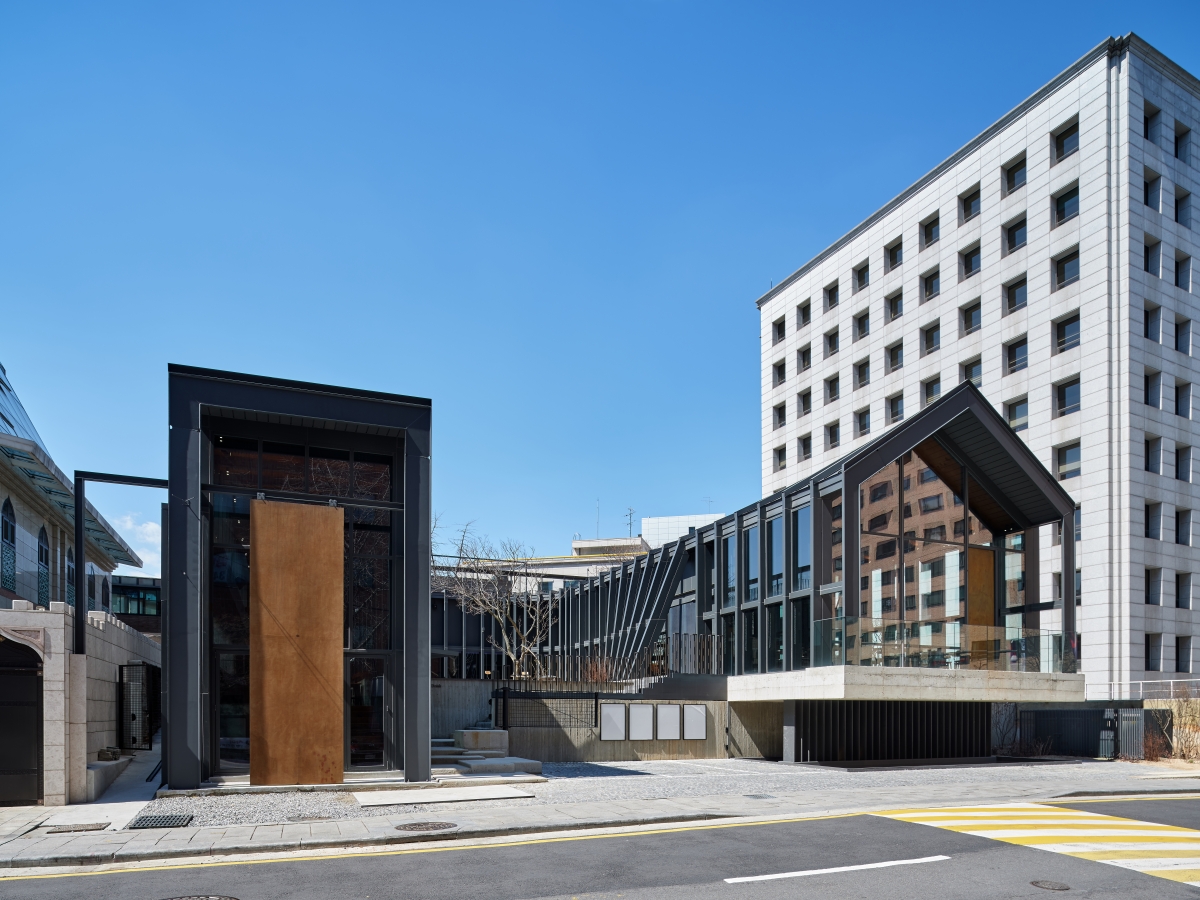 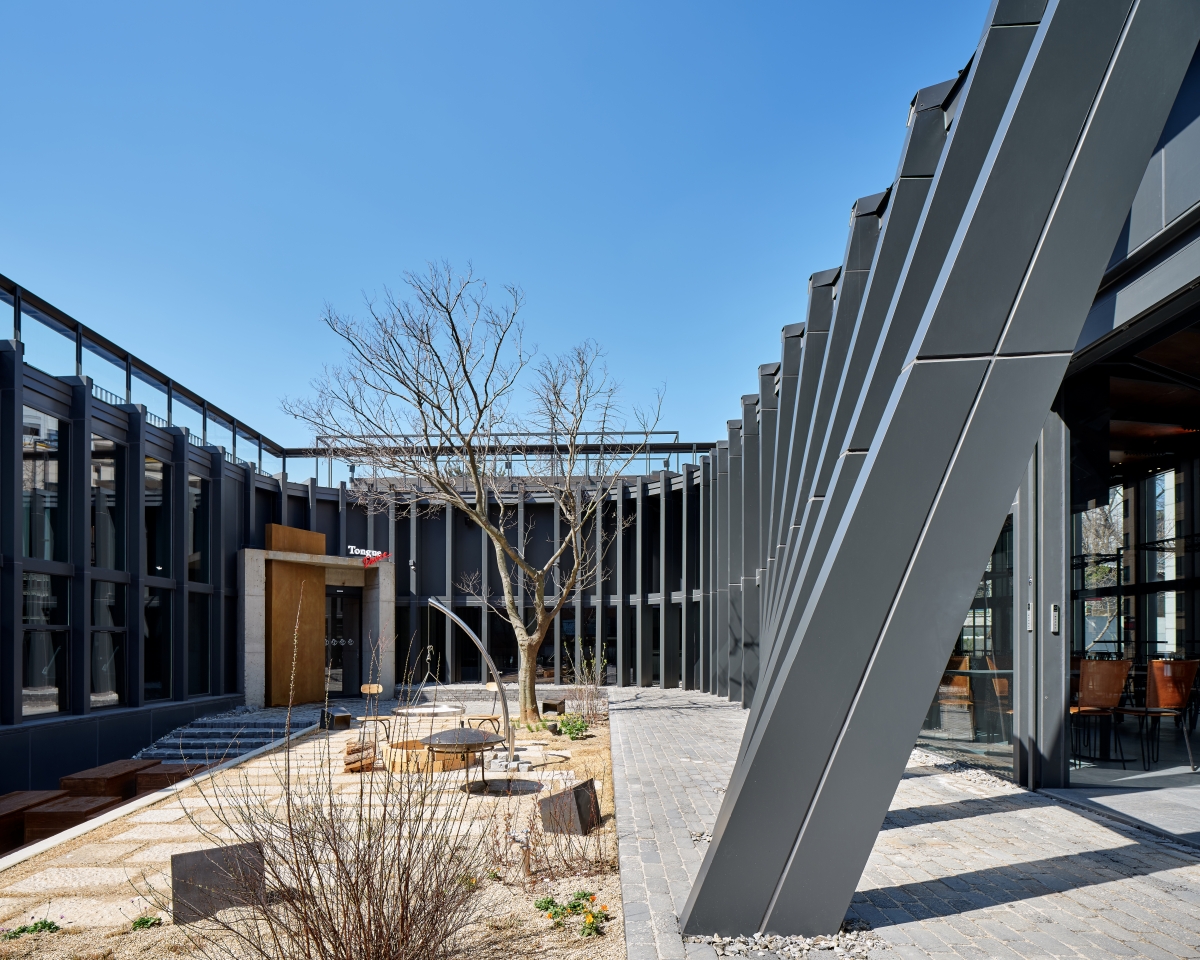 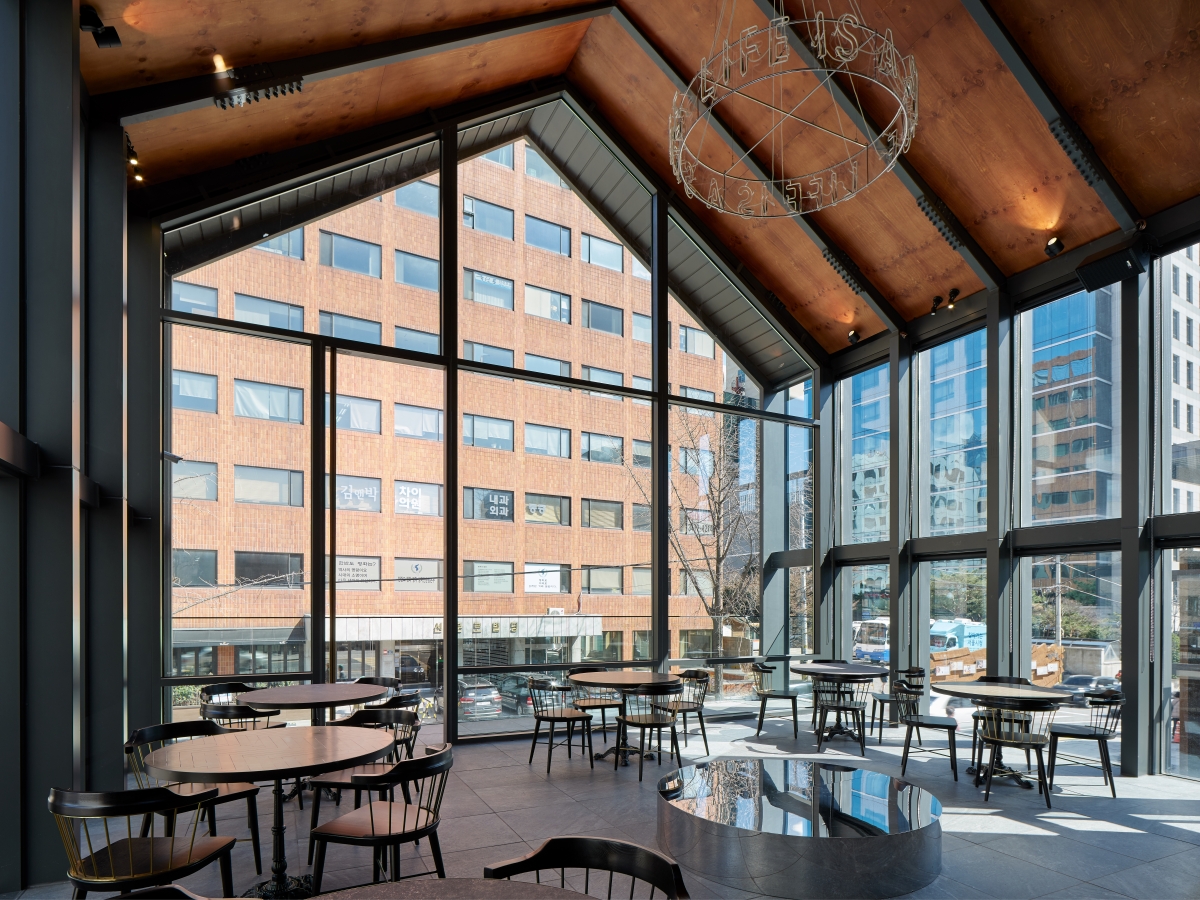 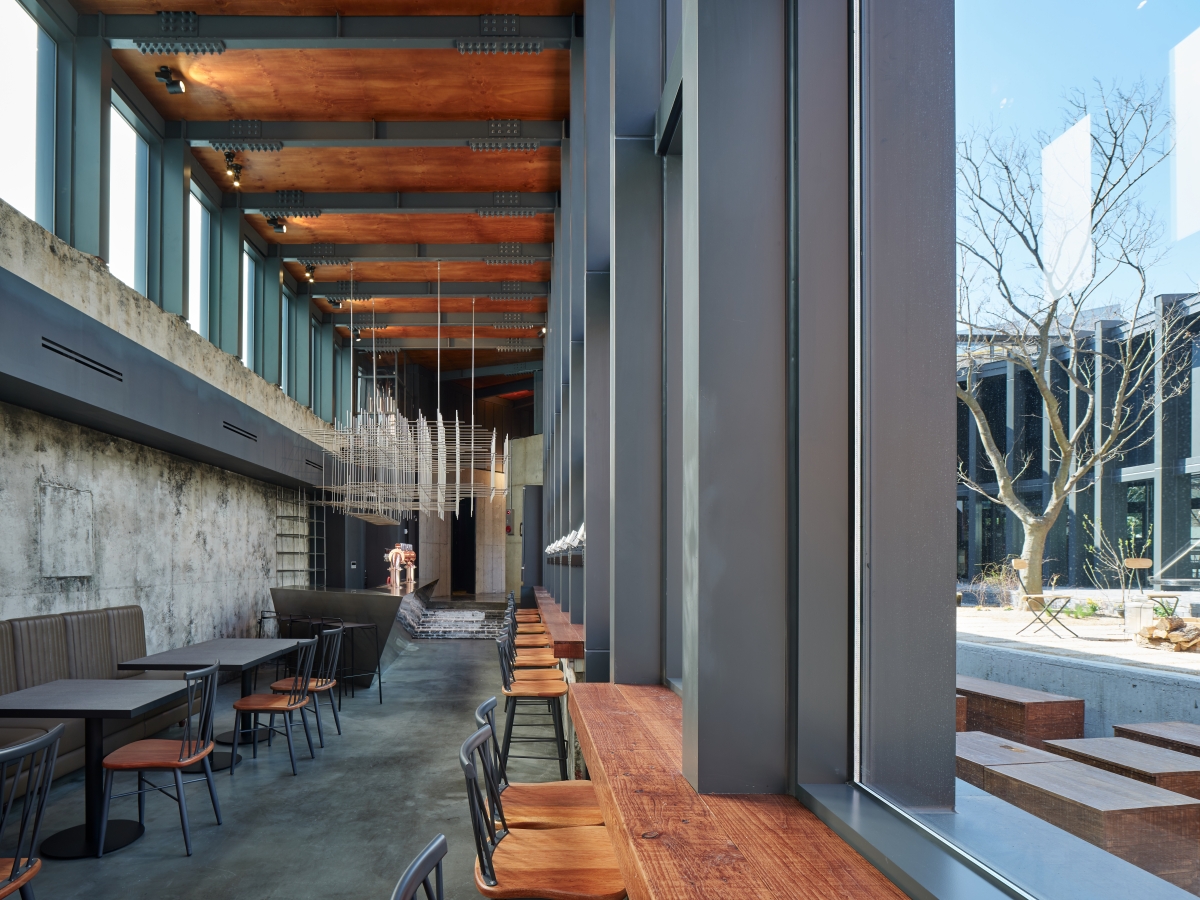 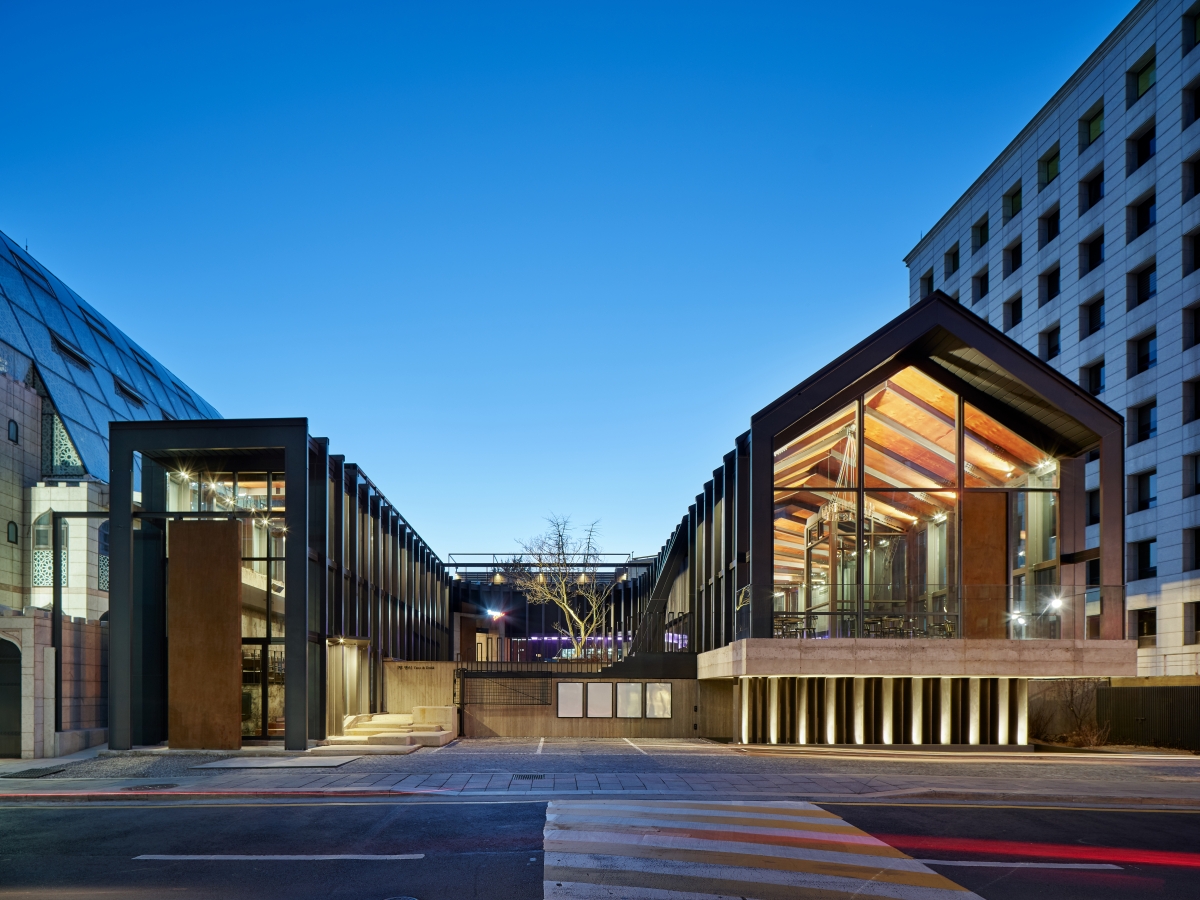