Lee Sungje (Lee): Could you tell us about the concept behind this remodeling project?

Ben van Berkel (Berkel): The existing Hanwha Headquarter Office Tower, which was built in the 1980s, had become outdated. Composed of uniform horizontal bands of opaque paneling and single layers of dark glass, by 2012 the façade was showing visible signs of age, was no longer providing an optimal indoor climate and was not energy efficient. As it was thought to no longer reflect the identity of Hanwha Group, as one of the leading environmental technology providers in the world, it was concluded that the façade needed to be updated to feature a more sustainable and responsive envelope. The Hanwha Group specified that the design should be guided by the surroundings, influenced by nature and driven by the environment. As such, the assimilation of these key parameters formed the basis of our concept for the project.

Lee: The façade design displays rectangular modules consisting of insulated glass and an aluminum frame. What parameters were brought into focus in the module design?
Berkel: The goal was to create a responsive façade which would prioritise and integrate three key parameters: programme distribution (exterior and interior), the indoor climate and environmental considerations. In the initial stages of the design we carried out a detailed study of each parameter, with specific regard for the building’s typology and location. This resulted in a number of different possibilities for the façade’s expression, but through an amalgamation of the results of these studies, an inclusive concept emerged which responded in an integrated manner to the key variables of the project. Economic factors were then introduced, enabling the standardisation of elements on a large part of the façade and the exclusion of double curved surfaces.
Lee: It seems that the programme determined the overall geometry of the façade, among other key variables. The programme includes an auditorium, a seminar room, a meeting room, lobbies, offices, and a sky garden. What aspects were considered when deciding upon the size of the building’s programme and its overall layout?
Berkel: The desired overall programme distribution and space allocation was provided by the client at the start of the project. We developed the programme for the public areas in greater detail, locating the important circulation channels and meeting spaces back from the façade and drew the work-related spaces closer. The auditorium and seminar room were also placed near the façade, so that they might enjoy views of the surroundings following public and private events. The space given to the sky garden was however limited by the existing conditions of the building. The basis for the façade’s expression was largely informed by these programmes: by varying the placement of the façade panels a variety of programme-related openings were created. Usually a uniform treatment is applied in the design of standard office buildings. However for the design of the Hanwha Headquarter Office Tower, even the slightest difference in programme created the opportunity for differentiation, with the result that the restaurant, the executive room, the sky gardens, the seminar spaces, and so on are all expressed in the façade and achieve 55% transparency across the entire envelope.
Lee: The module that makes up the façade consists of Parent Modules, and this Parent Module can later assign Child Modules. How many prototypes are there in Child Modules applied to the façade? And what kinds of variations are there among Child Modules?
Berkel: There are two main categories of Parent Modules: regular and irregular. For the regular modules, there are 4 children, and for the irregular modules, 14 children. Of those children there are 9 sets per orientation, north and south. By placing the sets unsystematically per zone, the overall effect was to create a randomised, yet controlled pattern. The next variation was introduced between the south and north by the added capping on top of the framing. This was determined by the orientation. With the exception of the irregular zones, on the north side the capping is shallow, in order to enable more daylight to enter the interior. On the south sides, these capping elements are deeper, in order to keep the heat of the sun out of the building and to create surfaces for the PV modules.
Lee: Child Modules are designed based on Parent Modules. In other words, it can cause a ‘butterfly effect’ in that a small change in the Parent Modules will lead to the avalanche of Child Modules, a scale variation perse. How did you manage the risk of increasing the complexity?
Berkel: We used a parametric design model. The aim of the design is to achieve an effect of variety, irregularity and intricacy throughout the whole façade. This is approached by combining a system of multi-scaled elements in a simple fashion. In essence these elements are frame-modules which react to – and are informed by – the key parameters described above. In order to achieve this, a digital design model was conceived that enabled the modulation of key parameters, which in turn influenced the layout of the building’s façade. This model was integrative, schematic and open-ended, dealing with complex assemblies of geometric and non-geometric project data, whilst remaining flexible yet accurate throughout the design process. The design model meant that we could constantly update and refine the façade panels, based on unique numbering, their location, orientation, geometry, adjusting the key parameters and initiating new and refined iterations of the design. 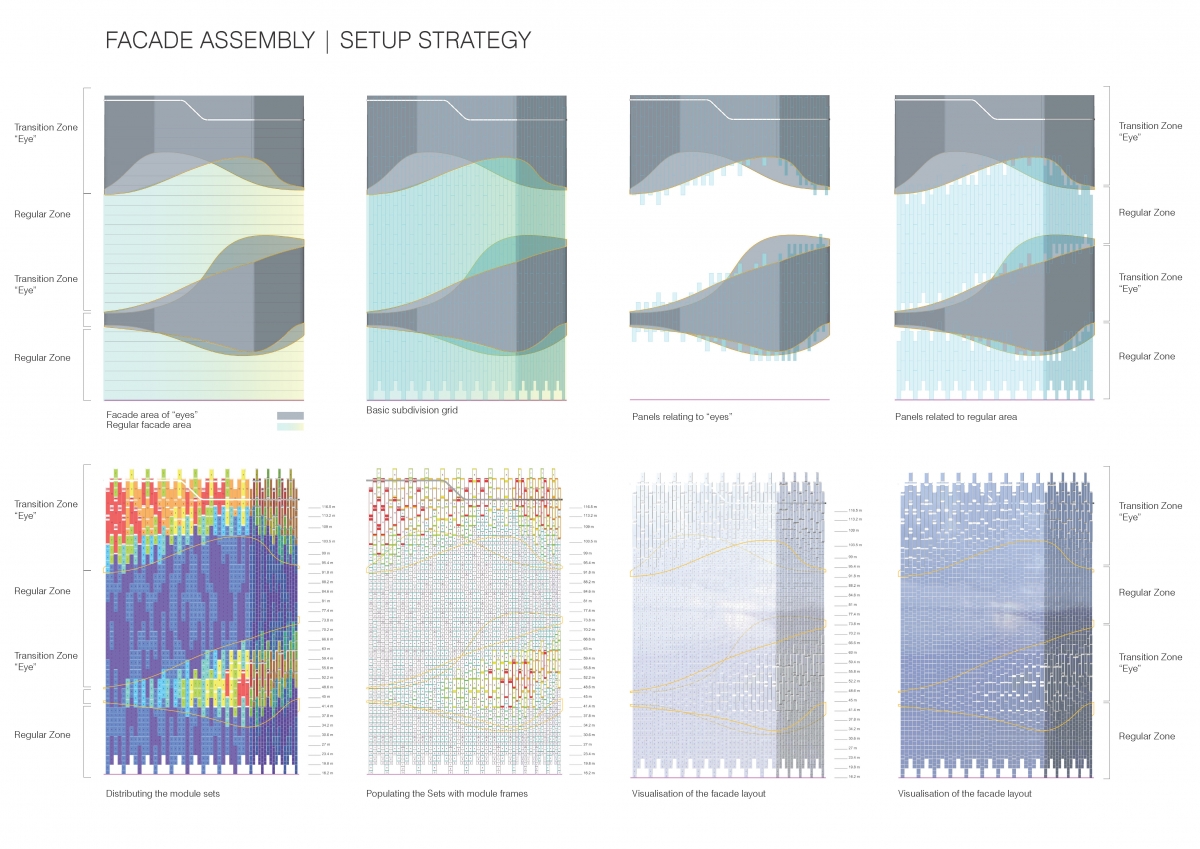 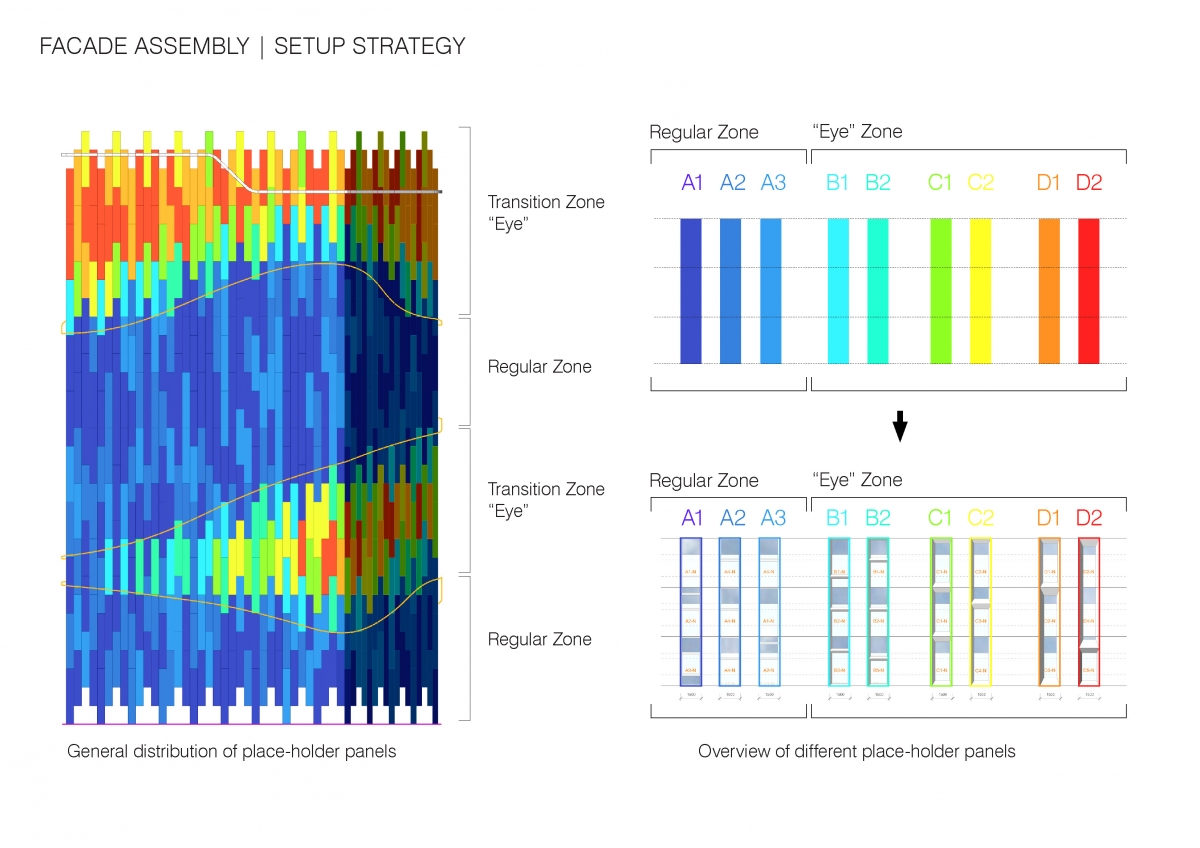 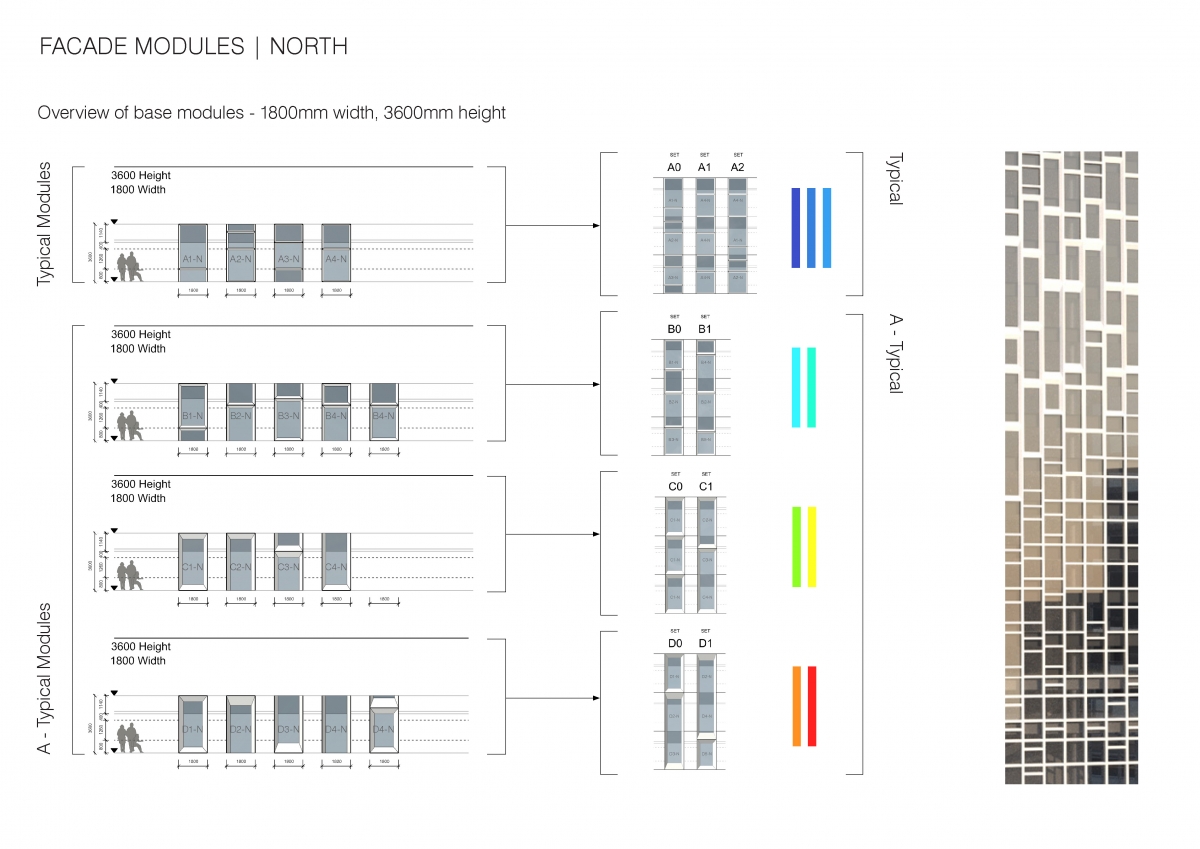 Lee: The project deals with eco-friendly issues. For instance, PV panels are placed on some modules on the south / southeast façade, and insulated glass on the rest. How much area is it covered by these PV panels and how much energy is it expected to generate?
Berkel: The PV panels (measuring 1,348×680mm) cover 275m2 of the façade (excluding the roof). About 300 PV modules are placed on the opaque panels on the South / Southeast façade at the open zones where there is an optimal amount of direct sunlight. The PV panels are also angled in the areas of the façade where energy from the sun can best be harvested. The PV capacity is 133.82kwh, while the estimated amount of sunlight is 4-5 hours a day. The annual supply of renewable energy is 800kwh/m2.
The overall energy consumption of the building before remodeling was 401.5 kwh/ m2, and so far, as the step-by-step façade remodeling reaches completion, is 242.4 kwh/m2 (approx. 39.6% savings). However, it will only be possible to measure the actual energy consumption values after the interior renovation has been completed and the occupants are back to using every floor, which is expected at the end of 2019. (The occupants remained in the building during the façade renovation, which was carried out 3-4 floors at a time.)​
Lee: In the early 2010s, there was a heated discussion concerning parametric design. However, nowadays, such parametric architecture and the design methodology seem to lose attraction. Do you think the methodology is still valid at this moment? And is there an advancement in this parametric design methodology since then?
Berkel: We believe, very much, that parametric design tools are still very valid today. However, problems arise when people confuse parametric design with generative design. With parametric design, the designer feeds single, or a small number of variables into the tool, which then produces a number of iterations that the architect can assess, and further tweak, in order to optimise the outcome. This saves a great deal of time and effort in calculation, but the designer remains fully in control of the process and the final result. As such, parametric design is not a completely automated, or a selfgenerating process, as many people assume.
With generative design, on the other hand, multiple and complex variables are fed into the tool and algorithms, or AI, generate their own variables; they work like automata—in a sense of removing the designer from the loop. In this case, algorithms calculate very complex problems that the human brain would not be able to process. However, criticisms typically arise that the architect has relinquished control to the tool.
Parametric design tools remain extremely useful to the designer, as they enable us to control the design process but carry it out at a much quicker pace. With generative design on the other hand, we perhaps need to ask how comfortable the architect is with the idea that artificial intelligence can sometimes find better solutions to very complex problems. Does such an automated process mean the architect becomes superfluous?
Another very common misconception about parametric design is that people automatically associate it with patternmaking, or with a certain style of architecture. But this is in fact not the case at all. Style, or aesthetic choices, are based on trends, not on the tools we use to design. Our criticism has always been that parametric design runs the risk of overly complex form-making for its own sake, or merely for visual impact. However, the design model used in the Hanwha Headquarter Office Tower façade shows that, when used to find the best solutions for a given set of highly varied parameters – both geometric and non-geometric – computational modeling can be guided to result in highly refined and performative solutions.​ 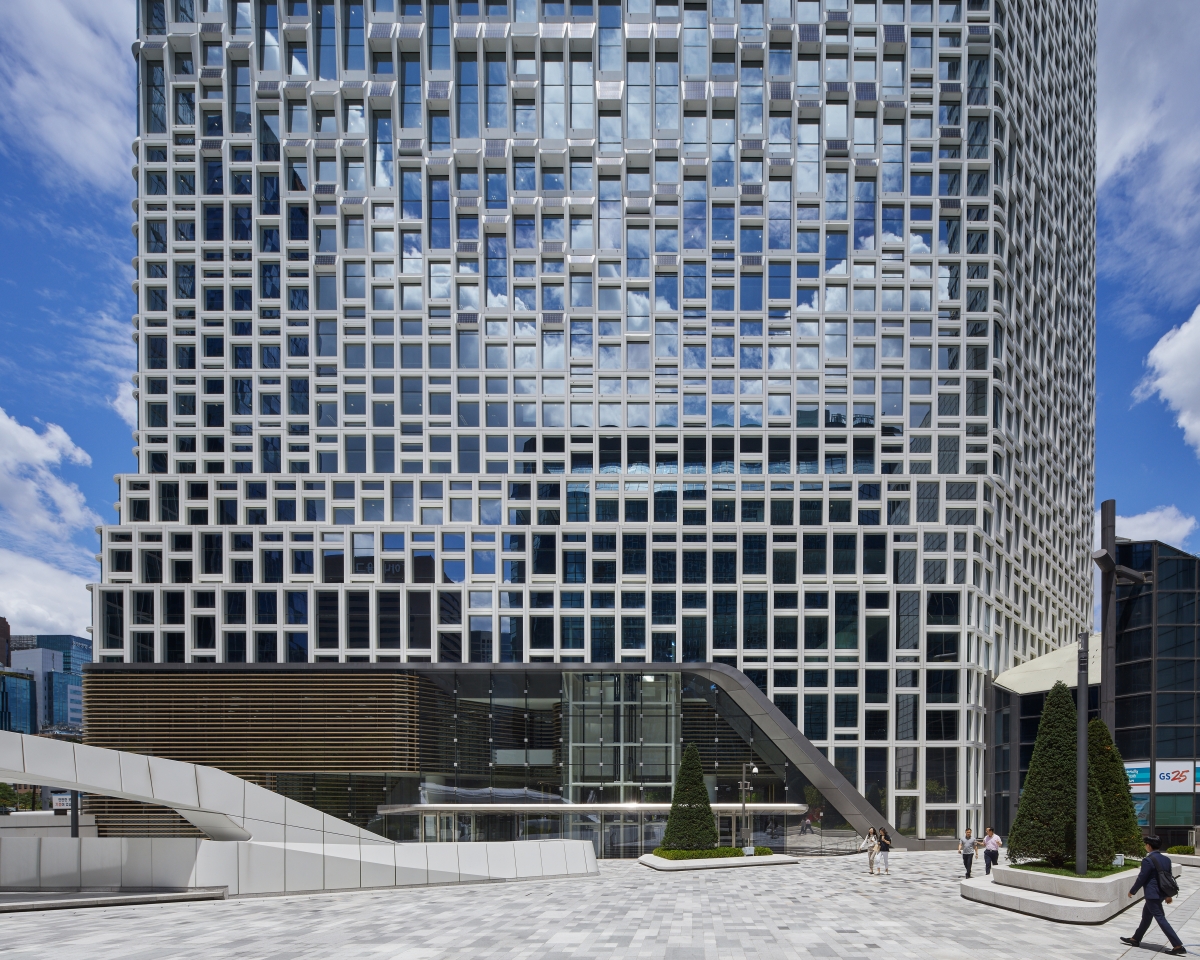 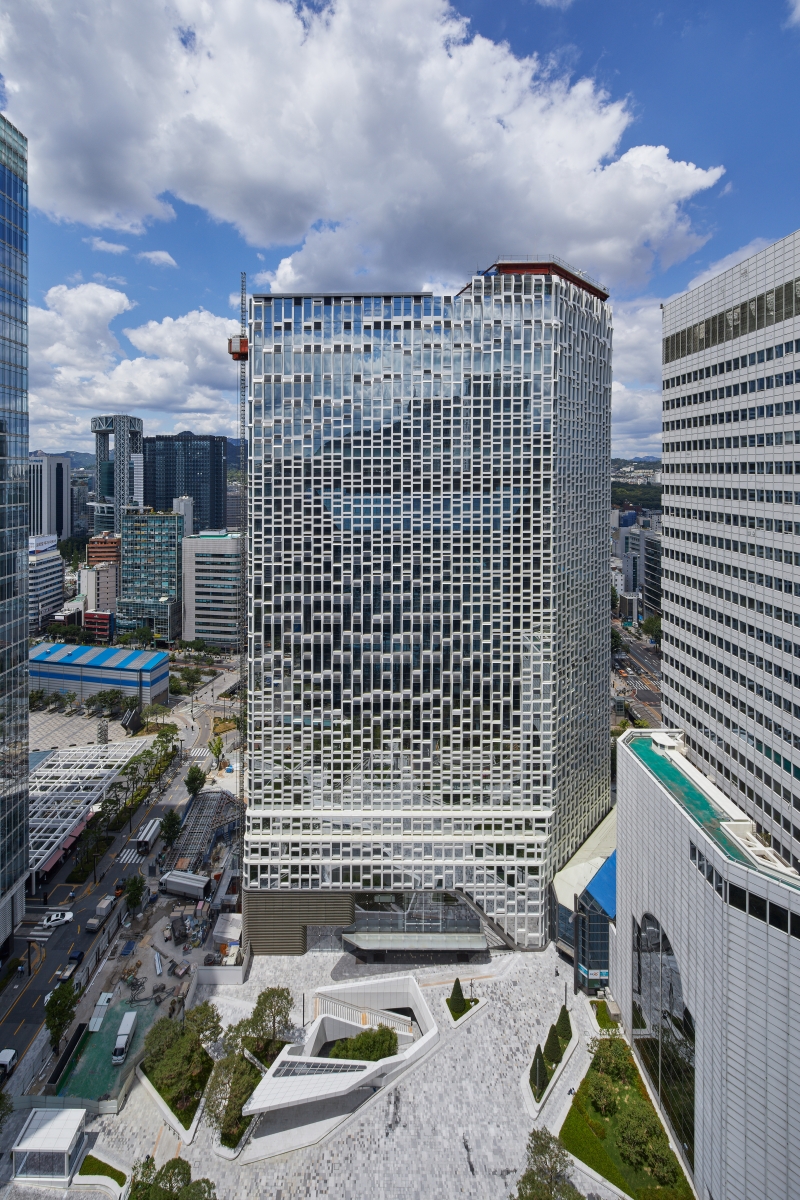 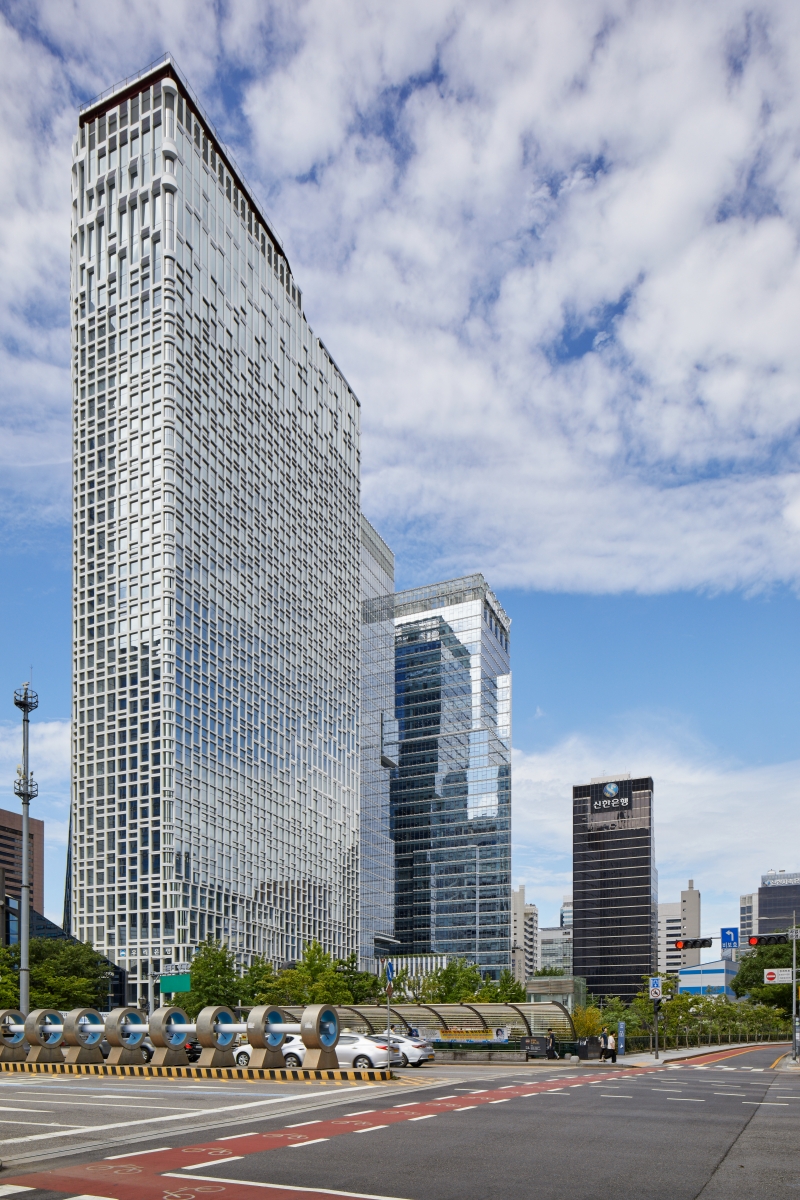 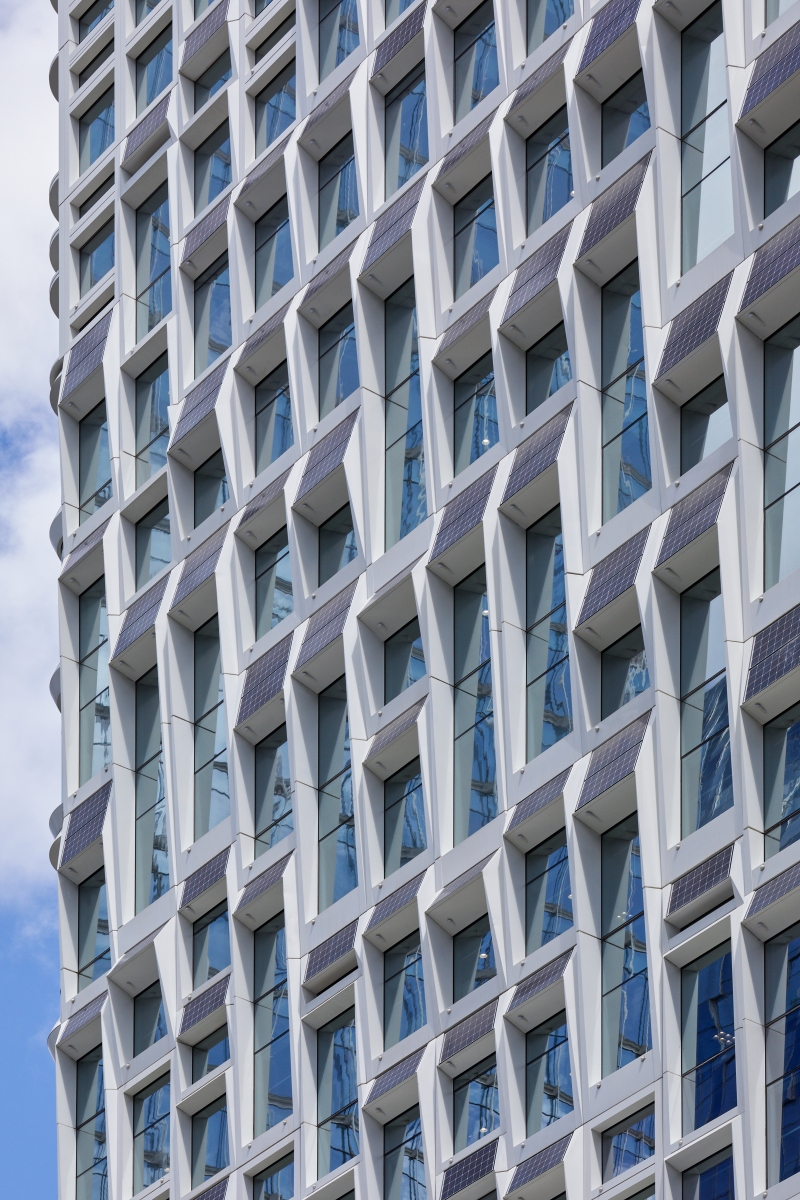 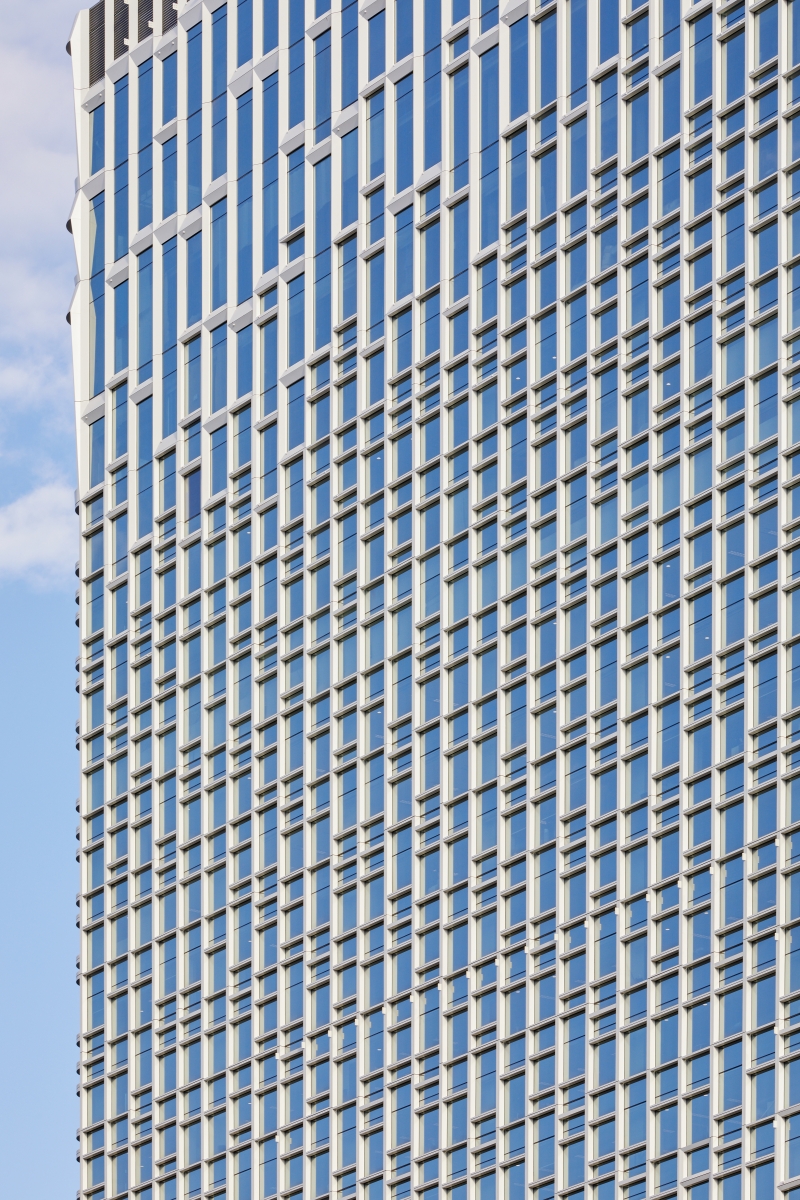 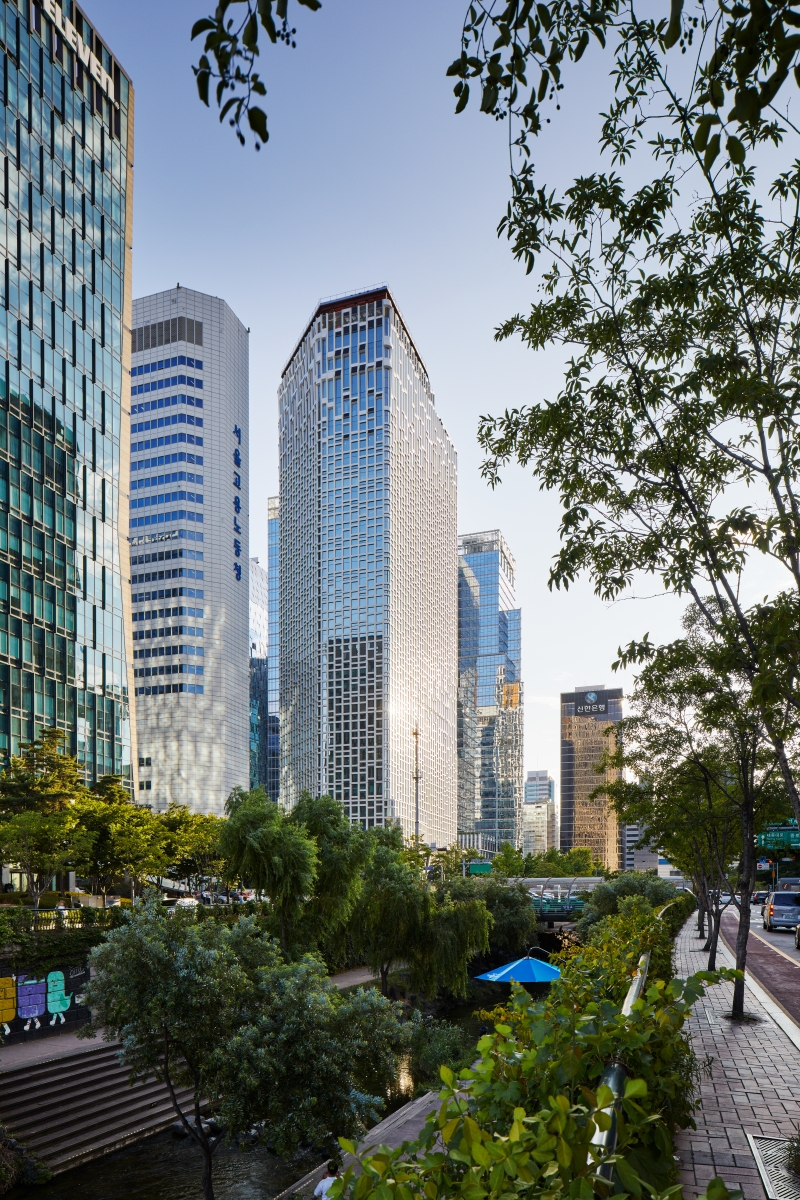