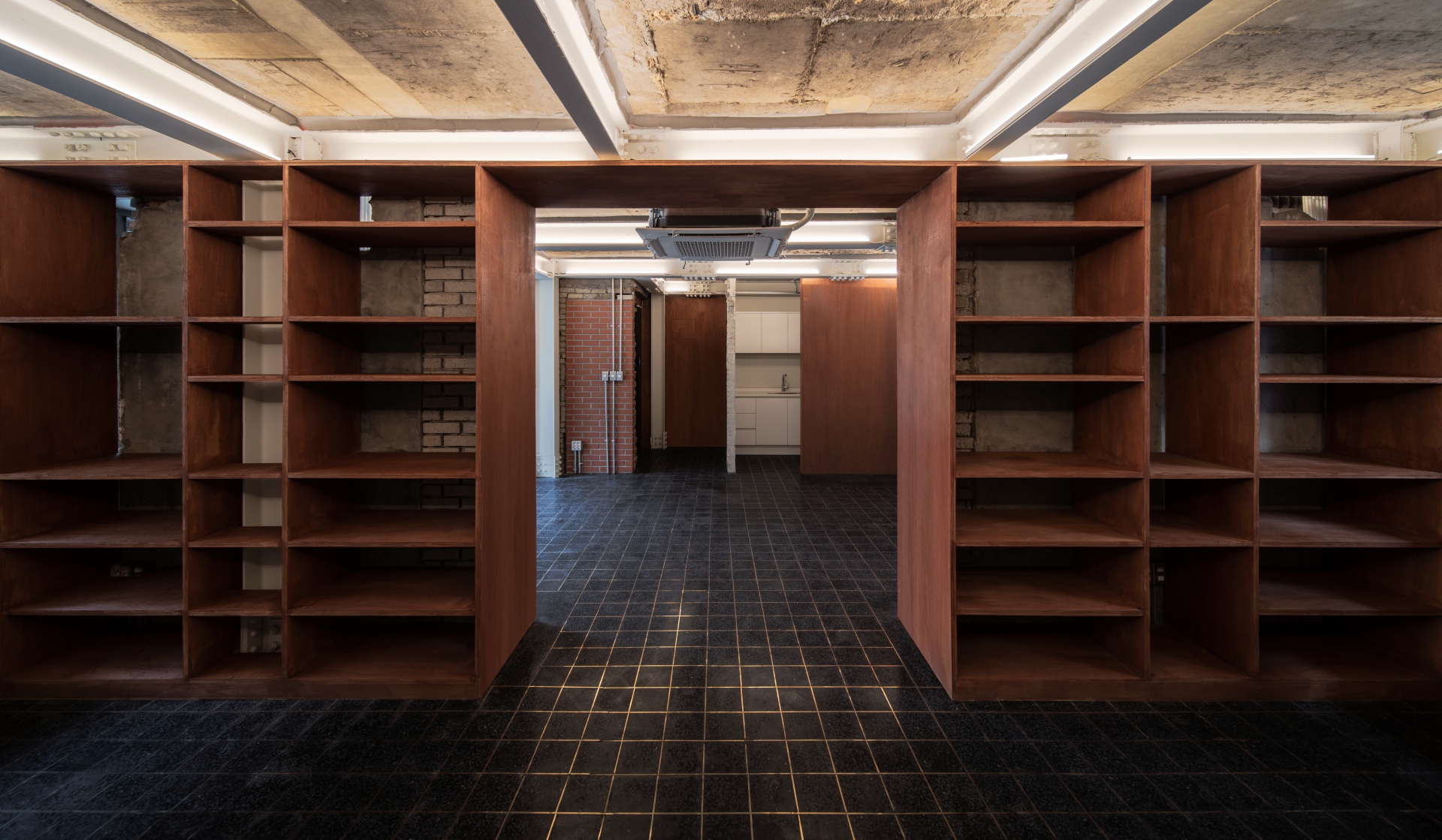 A Collective Style Representing the Era

The Guui-dong area, in the eastern part of Seoul, comprises many red-brick detached homes built in the 1980s. While villa-style buildings were newly constructed in the early 2000s, the area has retained its distinctive landscape, cherishing moments long past in each and every corner. The residential housing typical to the district, instigated by and representative of the realestate boom of the 1980s, still features the semi-basements and individual access at each level. The building codes of the 1980s required every building to have a basement that could be altered into a bunker with relative ease at the outbreak of war. There was no need to dig deeper or to introduce a higher ceiling in the basement. Later on, as a result of the hike in the housing demand coupled with a desire to maximize rental income, the semi-basement was transformed into a poor form of housing and buildings also became further compartmentalized to accommodate more than two units on each floor. Independent access has therefore gained in importance.

Residential Design Type of the 1980s and the New Design

Salon Guui presents a new stylish possibility for refurbishing Korean residential buildings of the 1980s. The building consists of a semi-basement, a first floor elevated by half a story, and a second floor, and independent access connected on each floor. The new design for the building of 195m2 – with five units (two in the semibasement, one on the first floor, two on the second floor) – includes an office (semibasement, first floor) and the residential area (second floor). The main office area is located in the semi-basement, which is suitable for the purpose of using the semibasement and the first floor as a unified office space.

The most important part of the project is the first floor, which has been elevated by half a story at the southwest road level. This space is designed without a specific programme. It serves as an office space connected to the semi-basement, but has the possibility of being used as a living space for the family members of the owner who will live on the second floor. In other words, the first floor, which is referred to as a ‘salon’, will act as a space between the semi-basement and the second floor, and become a reception room where various activities such as meetings, exhibitions, relaxation, and leisure can take place.

The Scope for Conservation and Demolition in the Original Spatial Layout

Buildings built by the so-called jipjangsa, the home sellers, also demonstrate the architectural style and language of the time. This type of architecture has a universal value since it functions as a ‘collective architecture’, representing the atmosphere of the time. The decisions to ensure what values persist and what do not during the renovation project follow the standards outlined by architects. This should be differentiated from the consumer trend of the ‘Retro’, which simply chases after that which has an old-fashioned veneer.

Salon Guui establishes a hierarchy of architectural elements on the basis of values found in collective architecture that are representative of the contemporary moment: the entrance layout by floor, the architectural elements of the exterior, the construction method of the floor and walls as well as the architectural details, the underground toilet, and plumbing system are all preserved in the style of ‘collective architecture’ that evokes a particular era. On the other hand, part of the wall and the slab have been demolished in order to meet with the purposes and functions of a more current programme.

Let’s take a closer look at the aforementioned issues. First of all, the bathroom used by two units in the semibasement allows us to imagine the living conditions experienced in the 1970s and 1980s. Parasite, a film by Bong Joon-ho, features a toilet located near the road that is set so low that no one can stand inside it. The toilet in the semi-basement in Salon Guui shares similarities with this example. As mentioned earlier, the bunker derived from an earlier building code and faced renewed demand on the housing market, initiating a conversion on what it would be to transform the bunker into houses, and creating the need to install unplanned bathroom and kitchen units. However, the septic tank was installed underground near the road so that the flow would flow uninterrupted into the sewer pipe. Its position affected the location and height of the underground toilet. In addition, to secure a slope in the pipe, these toilets had to be placed close to the tank. If we consider these facts altogether, the layout of the underground toilet is understood in light of the social situation of the time. The underground toilet, however, has been removed since the basement and the first floor can only accommodate a single programme in this project. There is a toilet on the first floor. As the soil that supported the toilet is removed at the base of the building, vertical access to the first floor has been newly introduced while preserving the pipeline and vestiges of the underground toilet.

The Status of Interior Space and the Modifications

This project reveals the covered finish of the 30-year-old house and the story behind these changes. When tearing down the slab and finish on the first floor, interesting traces of the expansion of space and its construction began to emerge. On the east wall of the first floor layers of different materials remain intact, from the bricks of the initial design to the final finish inserted illegally to expand the interior space. It seems that the bricks were laid over the marble foundations without considering the paricular characteristic of materials – marble, mortar, and brick – when merging with the terrace (the foundation), which would have been an outdoor space. However, the layers of brick of slightly different textures and the marble layer between them hinted at the years of difference between each phase of construction. In addition, the opening of the wall was found to have been filled, becoming a wall for surrounding space and internalised during the illegal expansion—As such, the house displays unusual construction methods and use of materials, and the refurbishment allows new users to experience the finish and construction methods of each phase by maintaining them.

On the other wall facing the east wall of the first floor, there is a mixture of decorative molding made of lauan plywood and the wallpaper. The style of bricks and mortar are preserved to appear as if on display, removing only the finish. In the space in the northern section, which used to be a kitchen area, a layout sketch in chalk lies behind the finish, preserved as a trace of the architect’s thinking from the 1980s. The slab creating the water tank compartment on the rooftop, which isn’t currently used, has been cut open and lit up to devise the entrance to the second floor; a double-story space. The pipes connected to the tank remain untouched, as part of the overall style revealing the frontal system of the building instituted at the time.

Attempts made to characterise the new finish as a governing architectural element appear on the first floor as well. The Terrazo – which normally used in public buildings and apartments of the 1970s and the 1980s, and made by grinding cement and rubber between the 900mm brass case – has been reinterpreted on a scale set by lines and planar elements in Salon Guui. The first floor grid, with 150mm brass cases filled with black concrete and dark gray stones, presents a brand-new spatial experience by outlining the size of the grid and stone different to that of those of the 1970s and 1980s.

The Status of Exterior Spaces and the Recent Changes

The outdoor space, defined by the type and the finish of its architectural elements, are preserved in order to respond to the native context of Guui-dong. Except for the size of the windows – which has been slightly altered – the Korean style bay windows, the 30-year-old red brick, the eaves and tiles of the roof, the detailing on the steps of the first floor, and the finish of the lower level foundation all remain untouched, in consideration of their values representing the common architectural style of the 1980s. The changes have been minimised by replacing the old windows with the one of advanced insulation capability, overlaying a mortar whose colour matches with the existing one in the monolithic sense of the volume, and wrapping the rails of outdated stairs and the balcony with coloured stainless steel panels. I hope that Salon Guui will create a homogeneous but unique landscape amidst the other local buildings built in the 1980s, privileging a contrast between the more common similarities and its subtle distinctiveness. 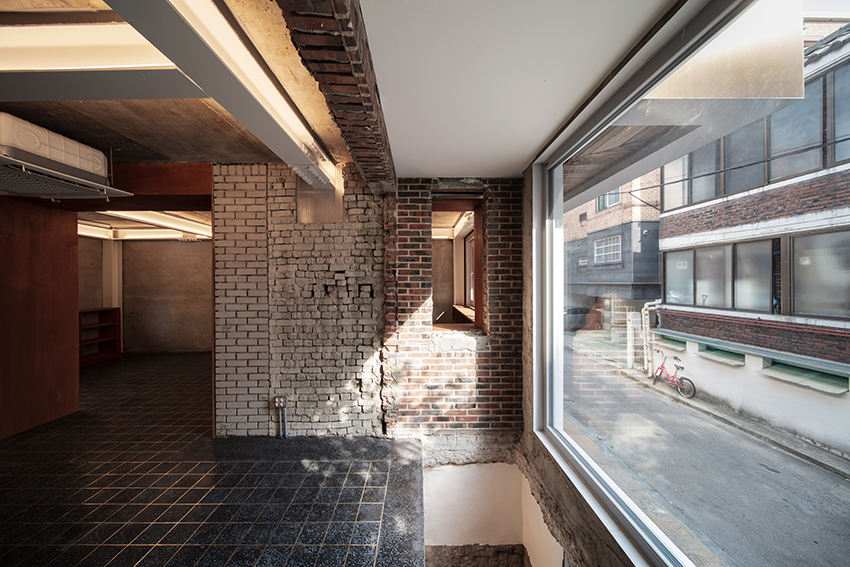 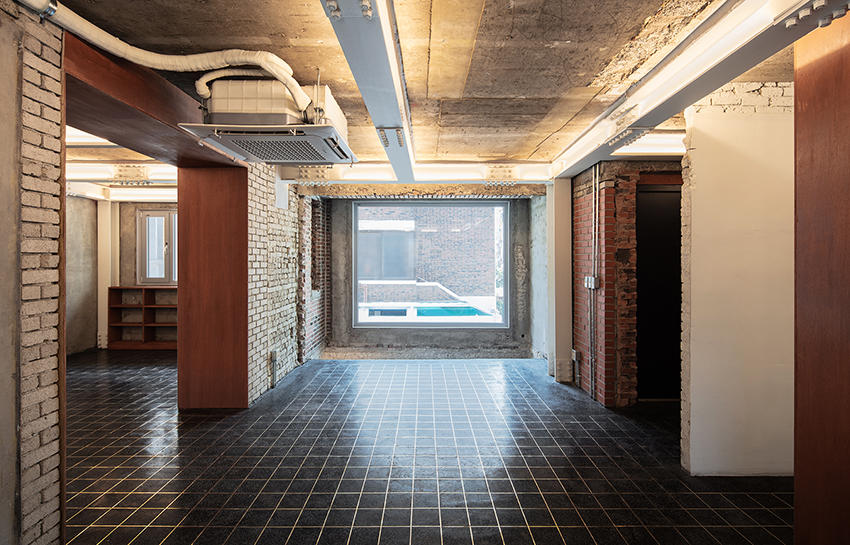 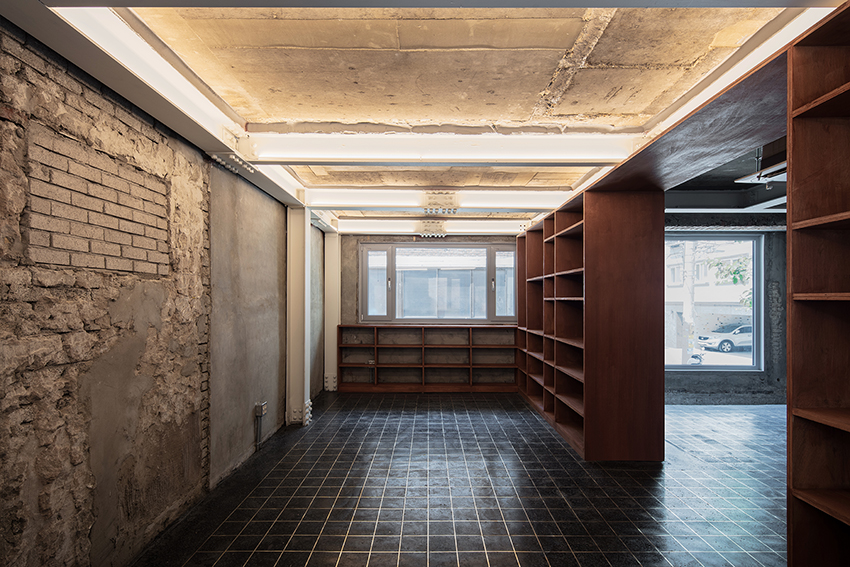 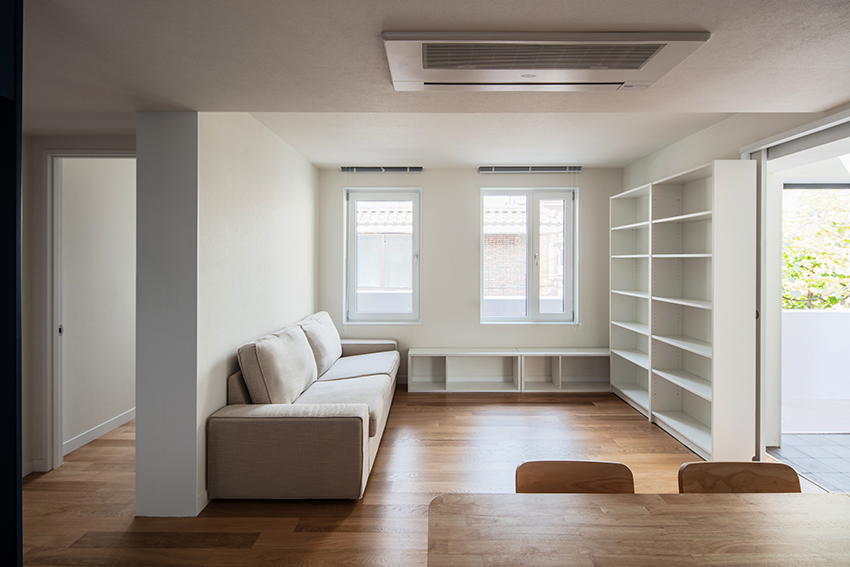 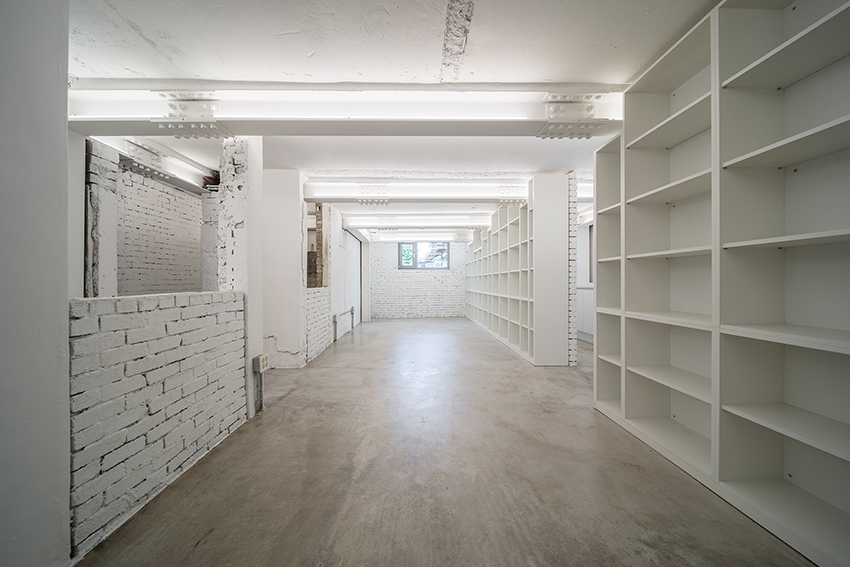 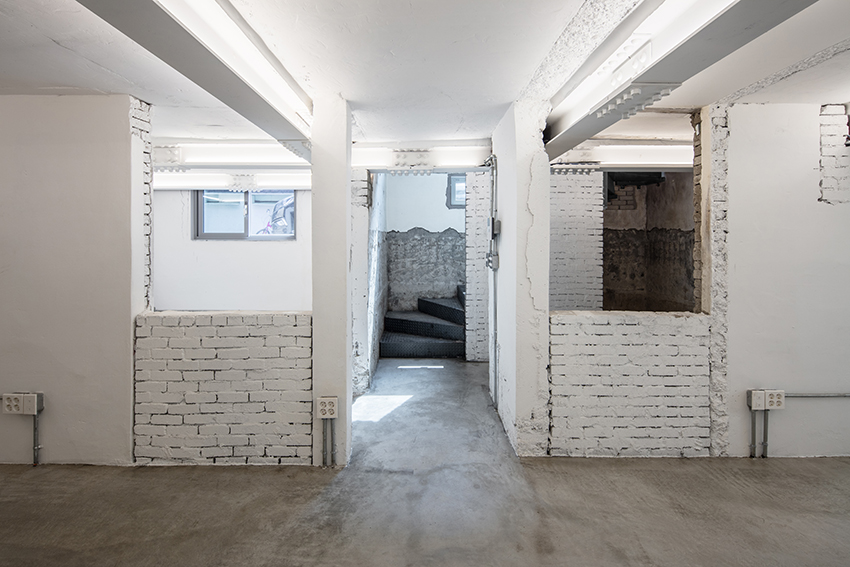 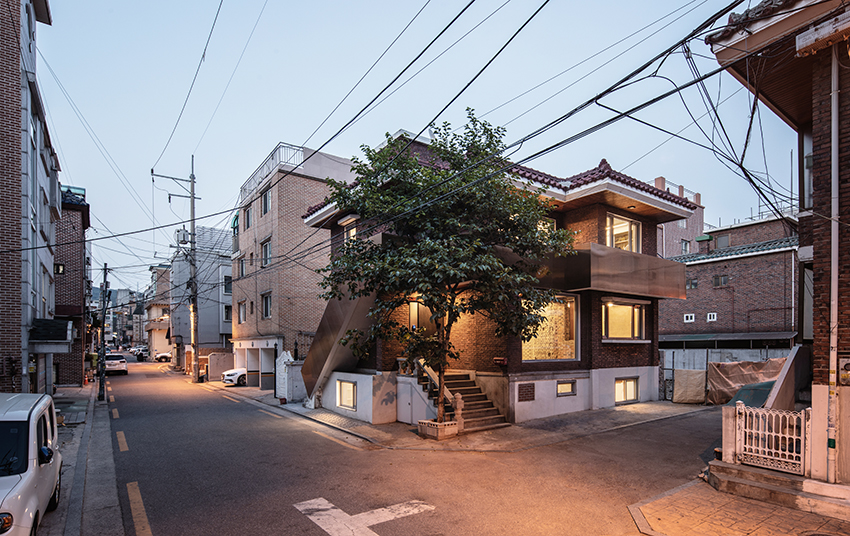 stpmj
stpmj is an award-winning design practice based in New York and Seoul. The office was founded by Lee Seungteak and Lim Mijung with the agenda, ‘provocative realism’. It is a series of synergetic explorations that occur on the boundary between the ideal and the real. It is based on simplicity of form and detail, clarity of structure, excellence in environmental function, use of new materials, and rational management of budget. To these we add ideas generated from curiosity in everyday life, as we pursue a methodology for dramatically exploiting the limitations of reality. stpmj has received numerous awards and prizes, including the Design Vanguard by Architectural Record (2017), the American Institute of Architects (AIA) New York Design Awards in the Architecture Category (2017), the Korean Young Architect Award (2016), the Kim Swoo Geun Preview Award (2016), among others.
No.621 August 2019 architecture architect Salon Guui stpmj remodeling renovation jipjangsa collective architecture detached house semi-basement masonry Guui-dong
LIST
bookmark_border
favorite_border
23