This residence started out from the idea of moving the families of three generations (i.e., the client couple, his children, and his parents) that were living separately in the city to a countryside. It is a house of co-living. In this post-growth era where low birth rate has set in, families that lived separately come to live together not only as a blood-related community but an economic community. Also, despite that they are a community, they have developed their respective life-patterns and values. Because this family is essentially different from the families of the past which share most of their time and space together, we sought for a house that can accommodate to a large family and the contemporary demands of its co-living patterns.

A house for three-generations

The client’s parents think of this house as a secondary living place as they keep their own place in the city. Hence, they see the house as a residential ‘hut’ (wondumak) that supports farming activities, as they will stay at this place only during the busy farming seasons. On the other hand, the client couple loves to travel, and hence they are often away from their home. Thus, they perceive this house as a part of their trip—i.e., as a base camp to prepare for their next trip. For the children, they now have a new hometown to return to during their vacation. 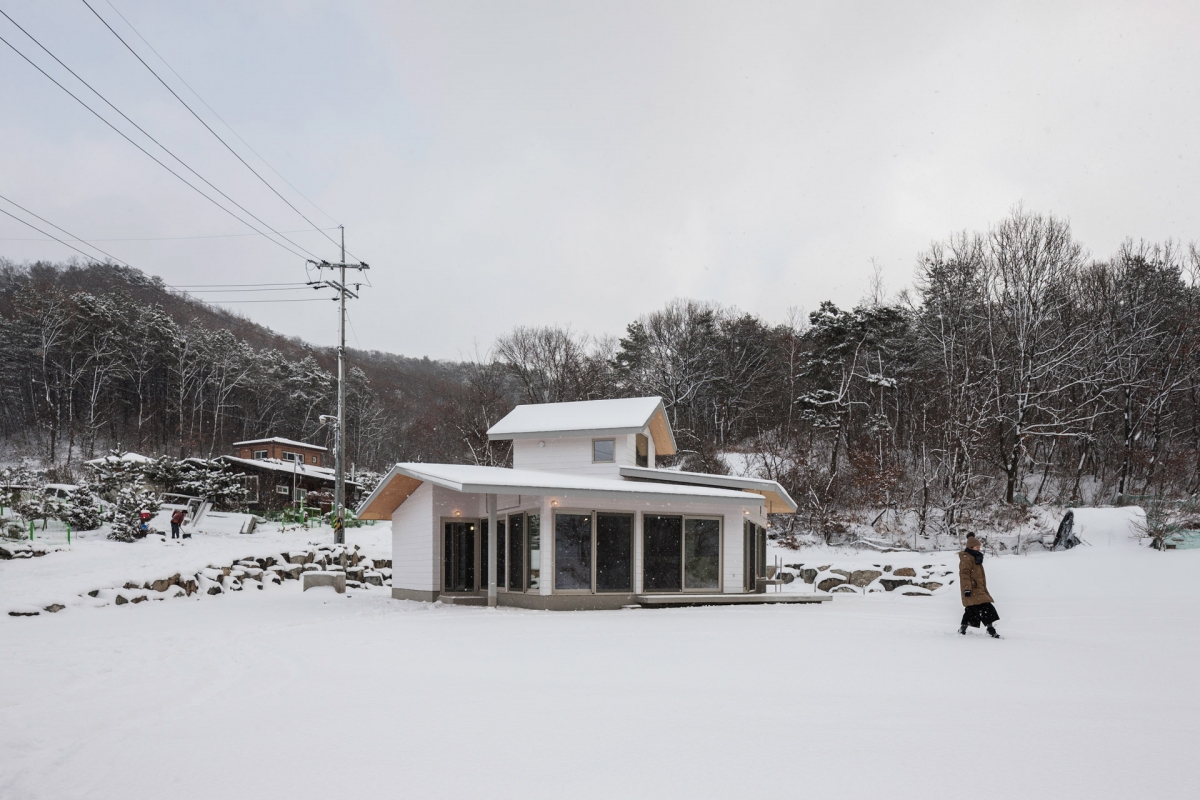 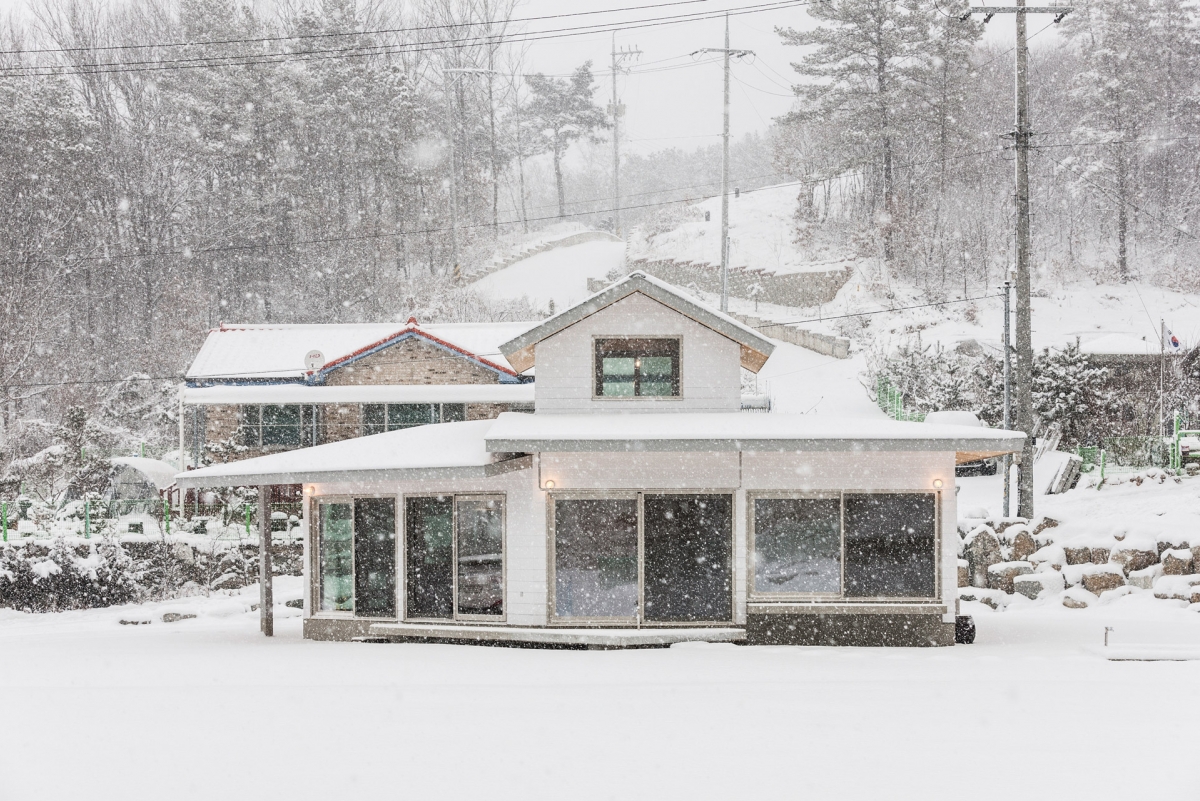 A rich natural environment and an agriculture-related geographical condition shaped the image of the entire village. We thought of a house that has such an intimate relationship with agriculture to the point that agriculture would be integrated as one of the decisive elements for this architecture. Also, because this village was created spontaneously, there was a lack of public facilities. We wanted this personal residence to function as a ‘stage’ where the public element of a village and the private element of a family could integrate harmoniously together. In order to support the culture that depends highly on neighborhood exchanges and cooperation, an architectural method that can create an open relationship with its surroundings and respond to the agricultural adjustments throughout the changing seasons was sought.

By putting together each respective thought and perspective of the three generations on a ‘home’, a residence where families and village neighbors can come together to mingle was created. Through this space where matters regarding producing, sharing, and consuming food can go about seamlessly and easily, it was ultimately sought for the family and the house to become a part of this village landscape.

We thought of developing the self-subsistent process itself—i.e., from the farm (production) to the dining table (consumption)—into a house. The balcony, which is an extension of the original concrete, is a space for handling the harvest. The crop can be washed with well and its tap that collects rainwater from the roof and dried by the drying rack under the eaves. The reception hall connected to the deck is where the harvested crop can be consumed with the neighbors and make preparations for the next production stage.

As an independent space placed above the two houses connected via a ladder, it not only provides one with a view of the mountains in the distance but also gives a sense of transitionas though one is entering a completely different world. It is a space that acts like a place of respite for the mind.​ 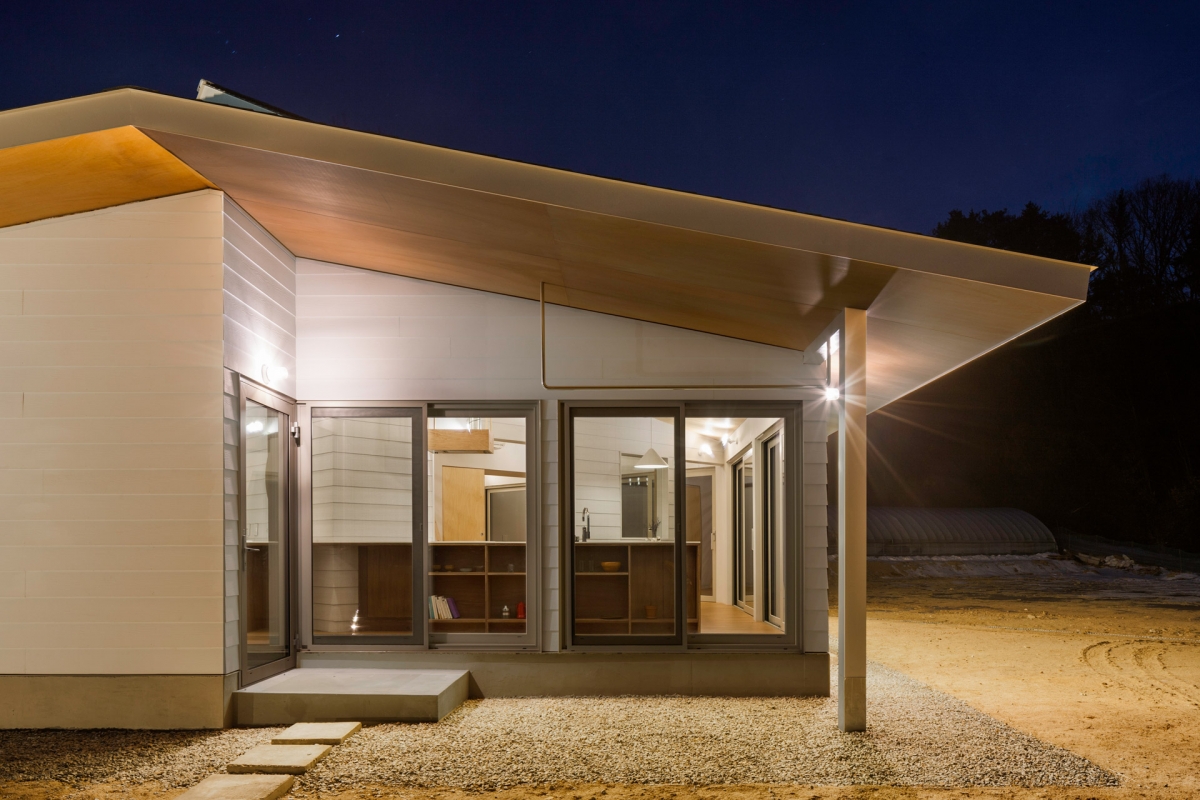 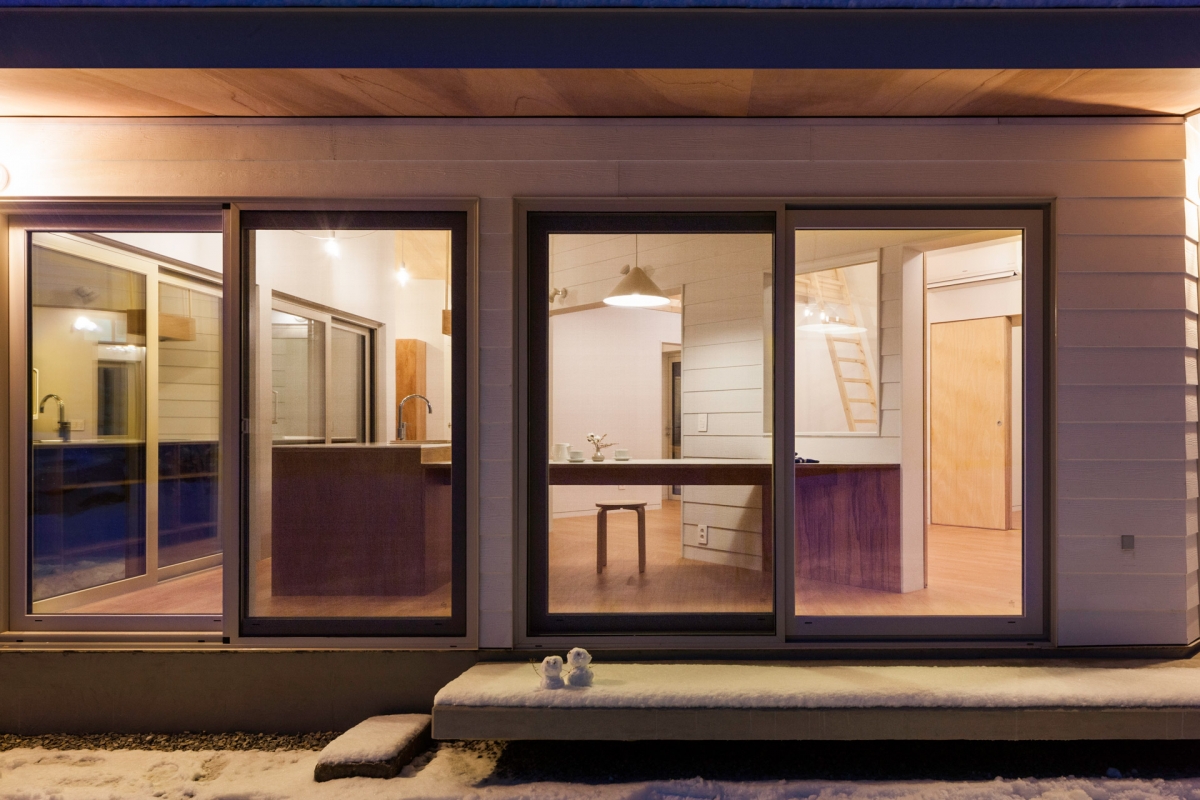 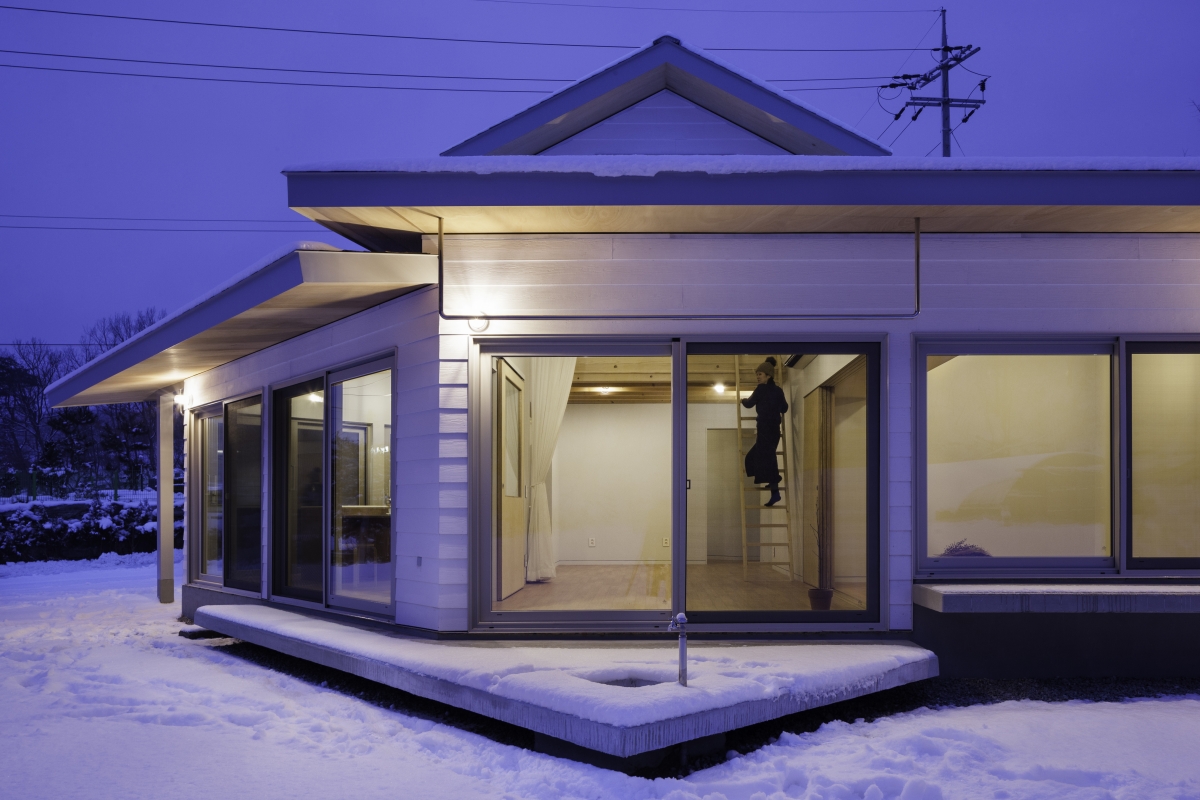 The plan that seems to be created by the joining of the two different houses takes on a house-like shape. The two houses are positioned in relation to the village and the farm respectively. The triangular adjoining house is positioned in parallel to the road to keep it open towards the street and the farm, andis designed as a space for the reception hall and the water facility. Because the reception hall is connected to the external wall of the main house, the external material continuesonto its façade, making the reception hall appear as an external intermediate space. This not only protects the privacy of the inner space for the families but also provides itself as a small meeting place for the village due to its open connection to its surroundings.

The main house is a rectangular space that is open towards the farm and the mountain. The time slots when the 3 families are staying together loosely overlap one another. To create a form that can cater to this, we created 3 studio rooms and a structure where one can adjust the realms between living room and private room according to different needs. Also, by making a gradual approach under the eaves by using decks of different heights between the farm and the house, we created a gentle connection between the farm and the house. Because it reduces the sense of distance between the interior and exterior, it feels as though one is sitting in the middle of the farm even when staying indoors.

Structure of the Three Houses

We also structurally connected the composition of the three houses. The main house functions as the structural core, while the adjoining house is attached to its side and the small house is placed at the top. Post-lintel construction is partially used for an opening that is connected by 3 façades. Because the foundation becomes the stylobate to cater to the various elements on the ground level and also acts as the medium that connects the exterior with the interior, we designed the deck and the rainwater trough by the porch to have structural unity.​ 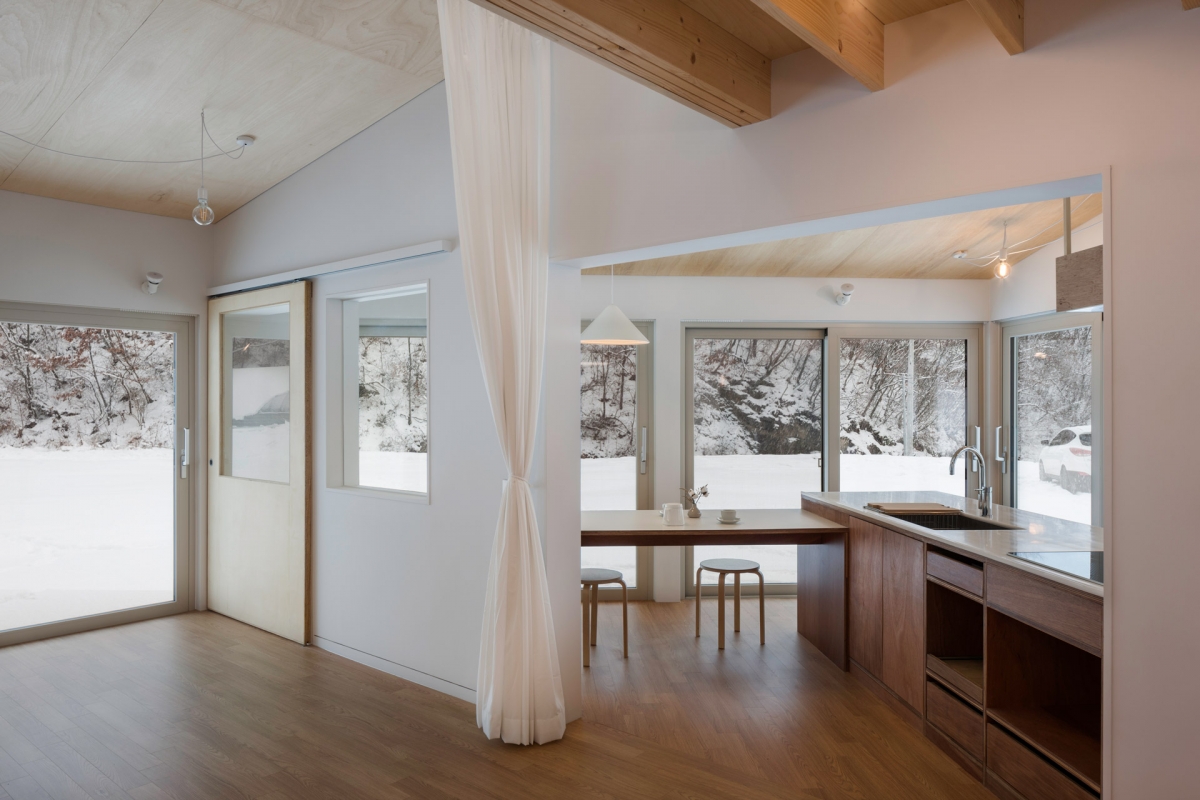 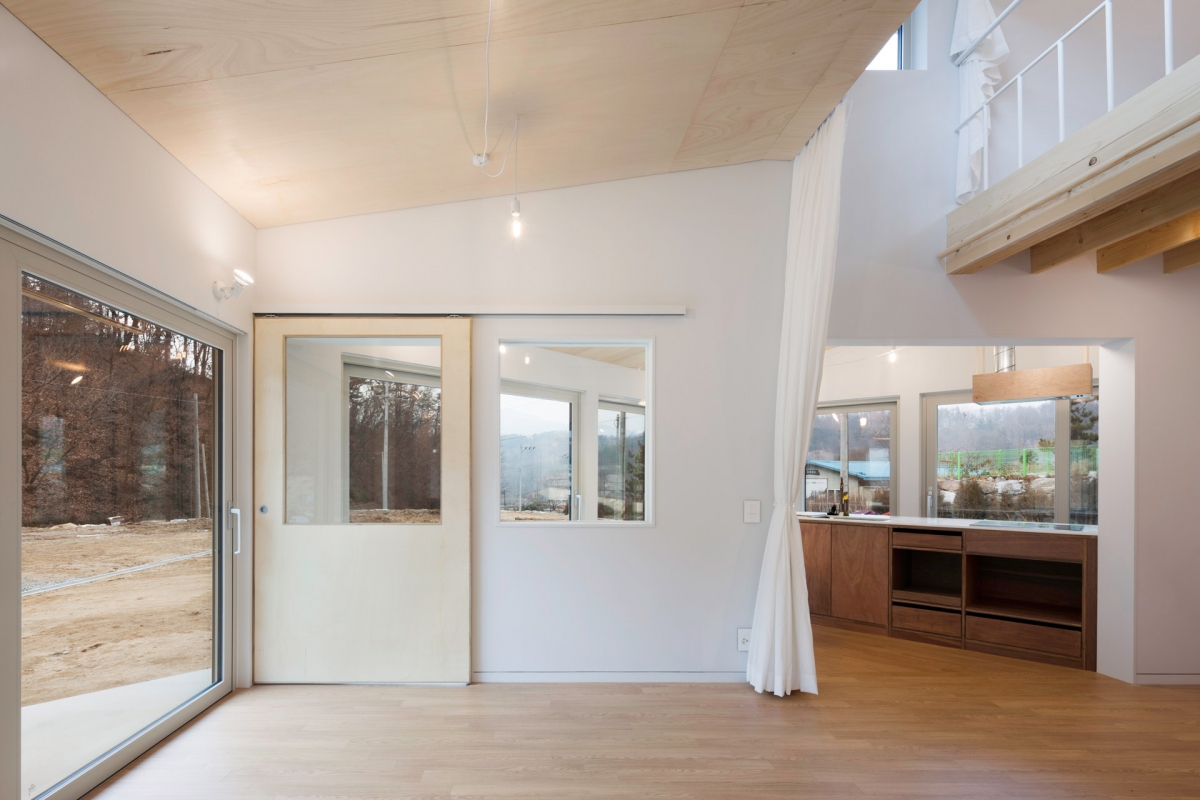 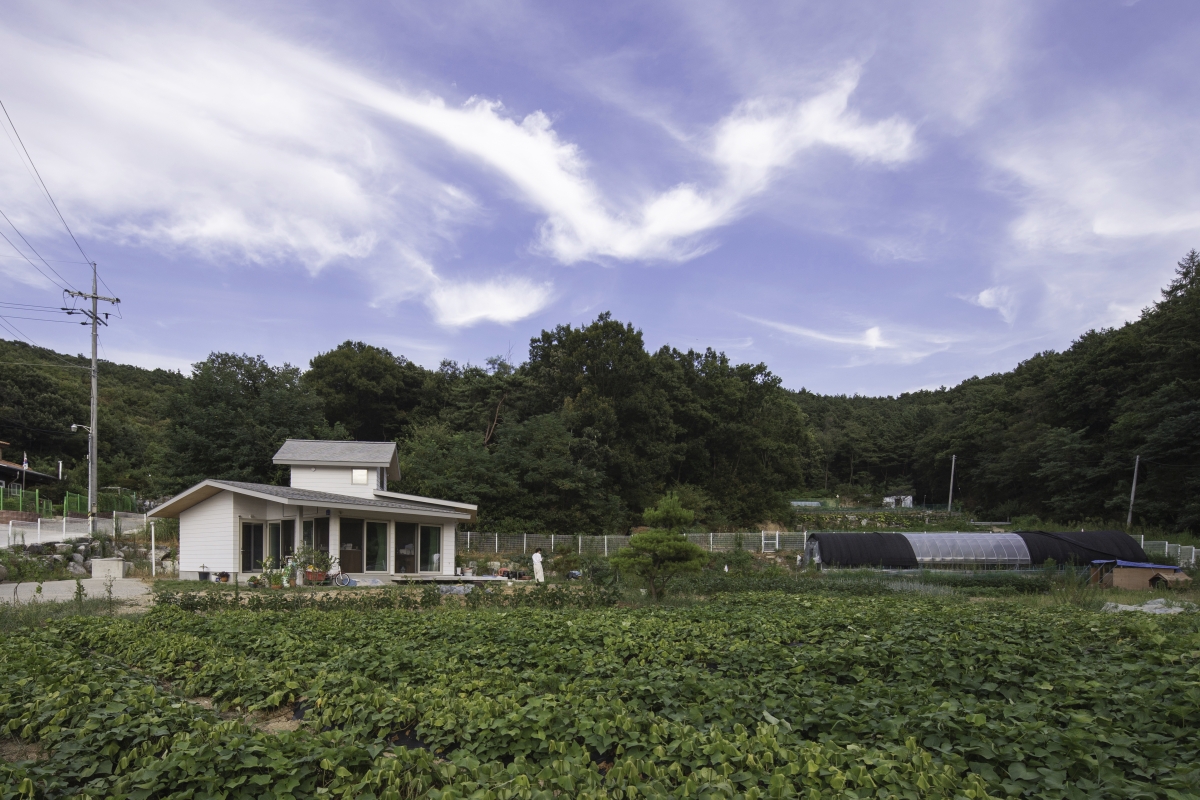 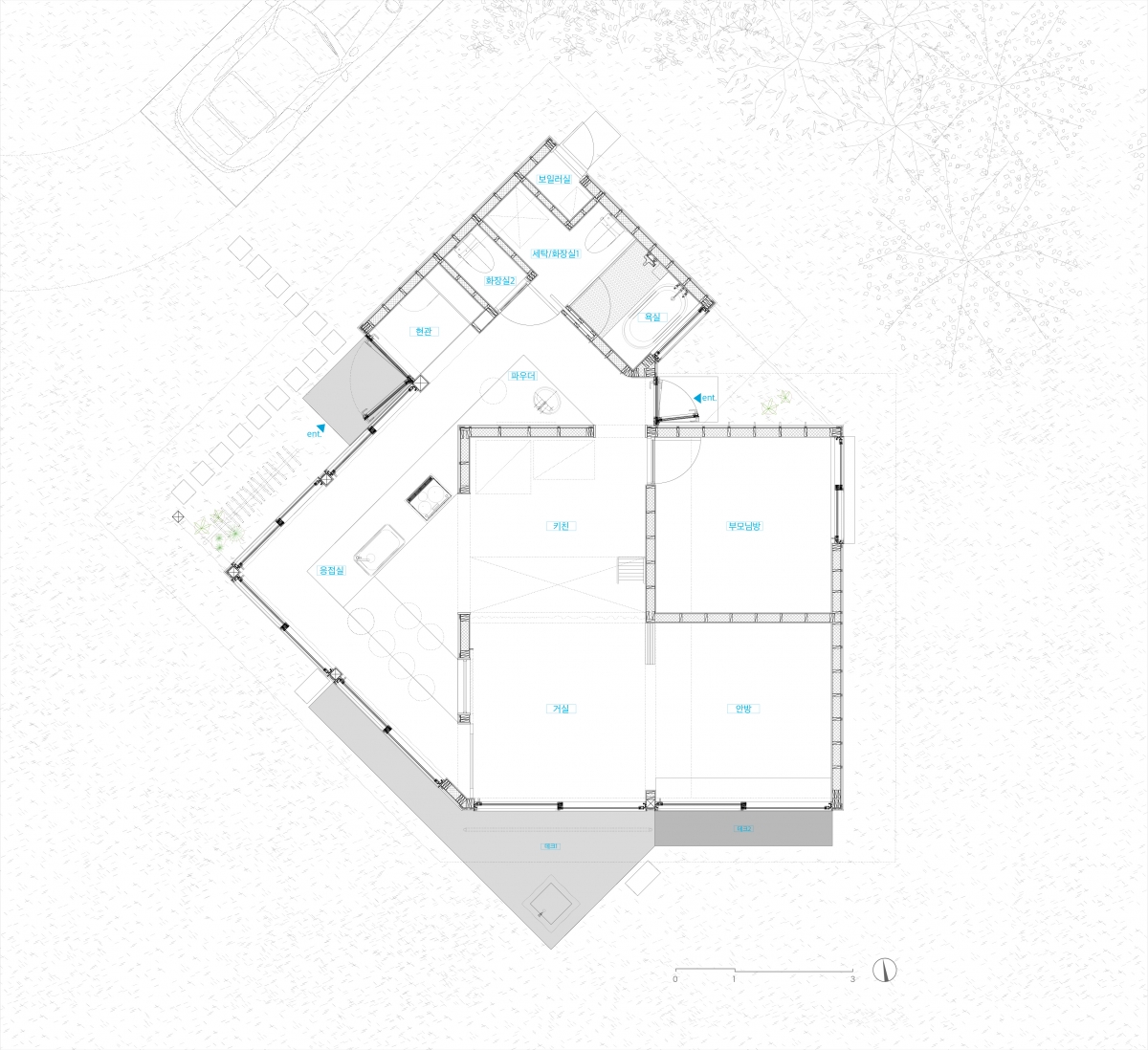 paint on siding board, paint on asphalt roofing

Haedeun Lee, Jaepil Choi
Haedeun Lee and Jaepil Choi graduated from Dankook University, department of architecture, and practiced in Samuso Hyojadong architects and associates. They also completed the research and master course from Tokyo University of the Arts, faculty of fine arts, department of architecture. In 2016, they established o.heje architecture during the master course and has been working in Seoul since 2017. House M was awarded SD Review Prize 2017 in Japan.
LIST
bookmark_border
favorite_border
23