Establishing a New Daily Life by Exploring Relationships
Leftover Frame, Filled in Landscape
Buckwheat Flower House, a restaurant that has stood on its plot for the past 20 years, was a place countless people have passed over the years. For a long period of time, the place was full of buckwheat dishes, the people who prepared them, and the people who enjoyed them. As its programme changed, from a private home to a small shop, and then to a restaurant, the house became more compartmentalized and partially covered, resulting in limited views from the outside. This state of affairs, which inevitably required major repair, presented an opportunity to take a fresh and closer look at this place. We redefined the relationship between the interior and exterior and between one room to another, while carefully considering the things that had to be maintained and the new things to be filled in. Throughout this restorative process, we brought the surrounding landscape into the space, which used to be teeming with the aroma of food and peoples’ voices. The structural frame that supported the existing roof became a picture frame to encompass the surrounding landscape. The role of the walls dividing the kitchen and the hall was replaced by the lower podiums. The columns supporting the newly added second-floor space were designed in a different manner than in that of the existing structure, and they were overlapped on top of the existing layers. The overlap created an in-between gap that introduced a new rhythm within the space, providing a new look to the structure.
Rediscovered Ordinary Materials
The stone walls of Gyeongbokgung Palace, the landscape of an old town with hanok, the buildings that continue to be built near Hyoja-ro, and the insufficient construction costs all made us think carefully about the selection of the exterior finishing materials until the very last moment. We collected familiar materials that were found in the neighborhood, and looked for new ways to use them that would express this new manner. Several different methods of cement plaster finish, which can be easily seen on the inner alleyway, give us an idea about the exterior finishing materials on the first floor. When we were determining the size and colour of the keystone that would be mixed with the plaster, and when we were figuring out the ways of washing off the plaster, we thought about the image of buckwheat flowers in a field. Granite, which is commonly seen on large roadside buildings, was adjusted to fit a new proportion, erected vertically, and became a finishing material on the second floor. By determining the granite modules and the connection details, we hoped that the physical properties of these materials would be expressed in various ways, based on different times and weather conditions.
Scenes
#1: Noon. Customers begin to come in for a meal. It is the time when the most light comes in through the skylight. Sunlight entering through the window flows along the wooden wall, and a pleasant breeze moves past the door. The stone walls of Gyeongbokgung Palace fill the window, and my neighbour passes in front of it.
#2: Evening. When the sun goes down and the streetlights turn on, the shades of the street trees – which must have been here for many years – trace a beautiful painting on the newly built wall, as if it were a sheet of drawing paper.
#3: A rainy day. The rough surface holds water, presenting a deeper and gentler look.
​ 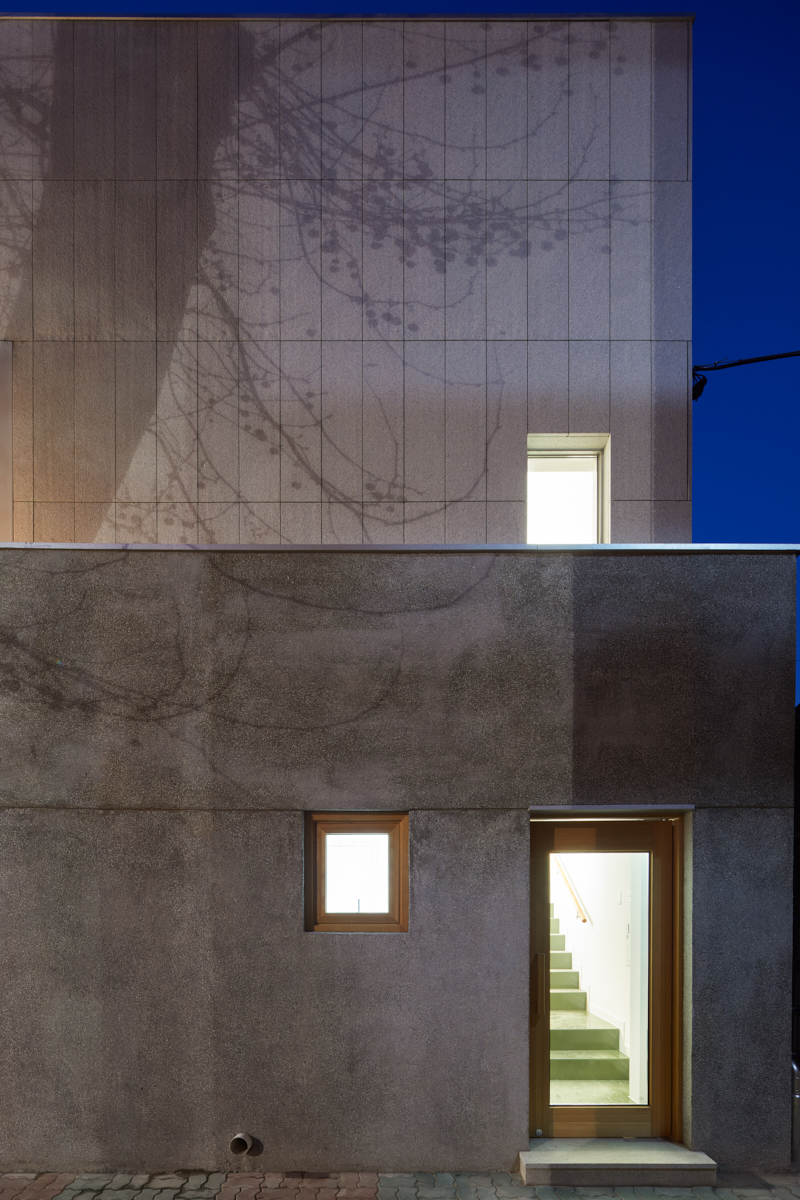 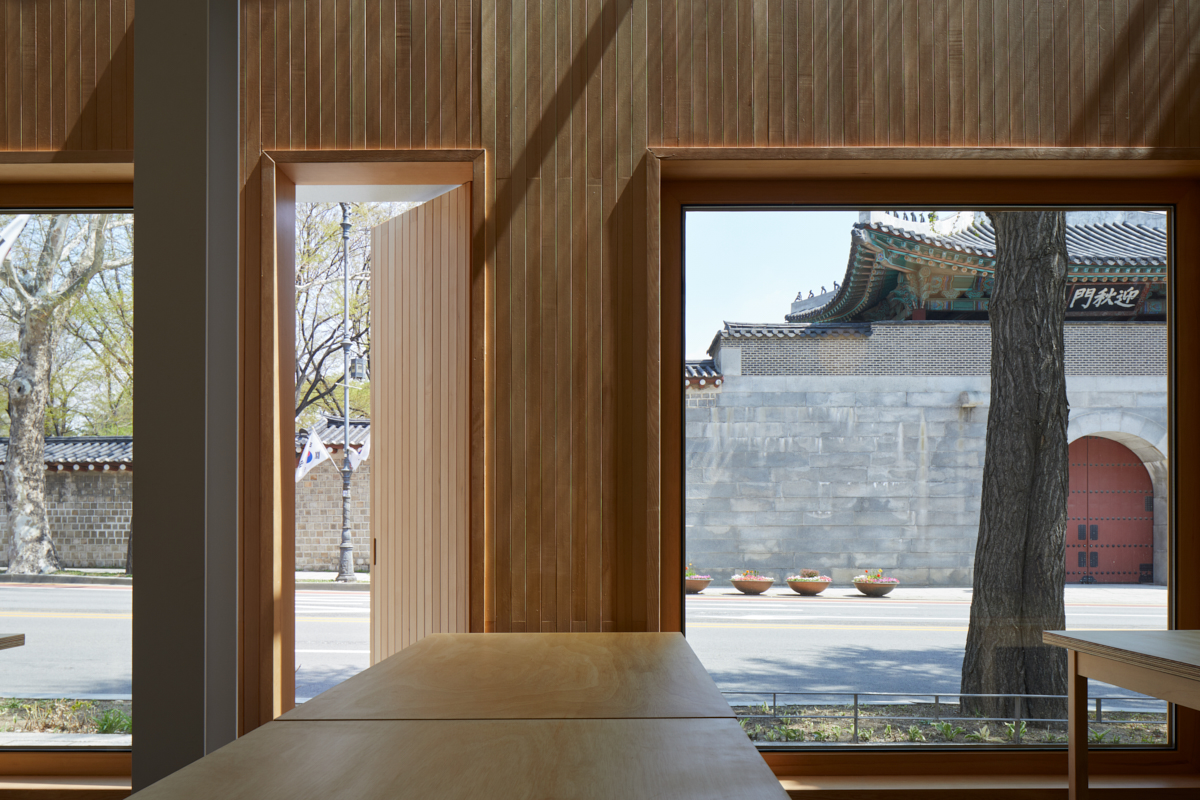 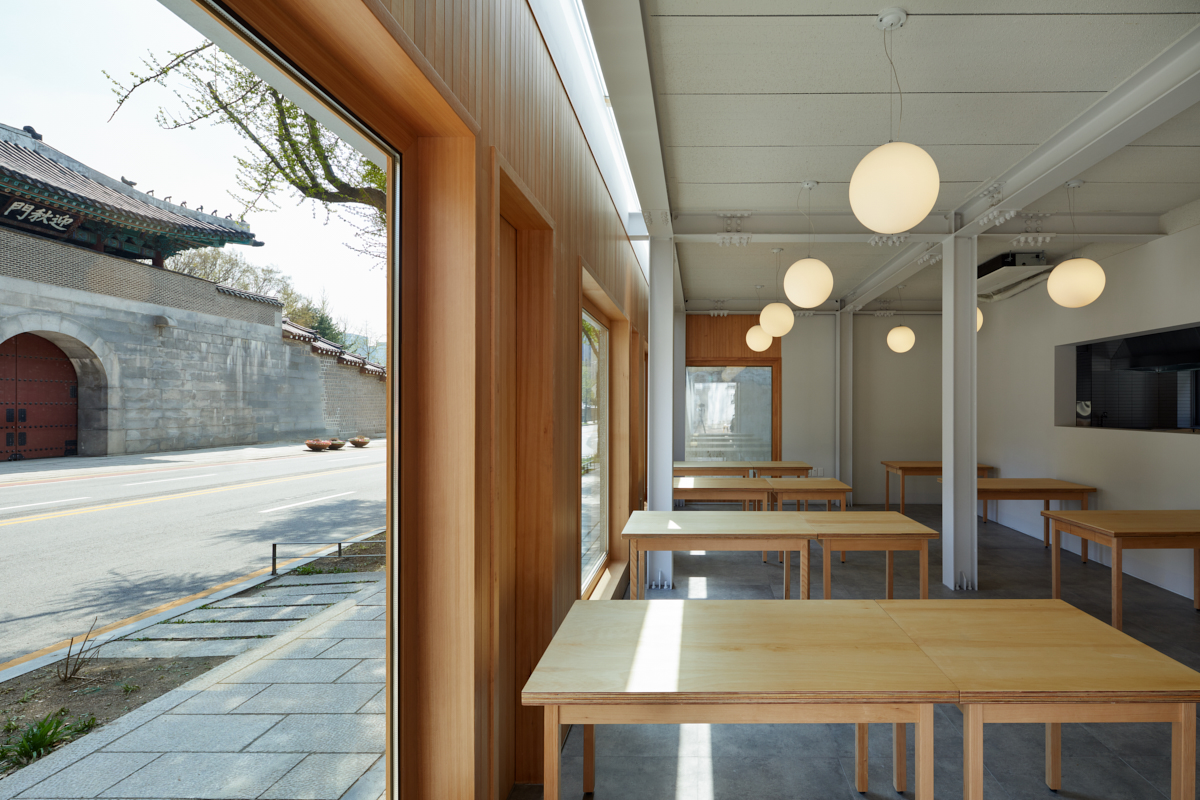 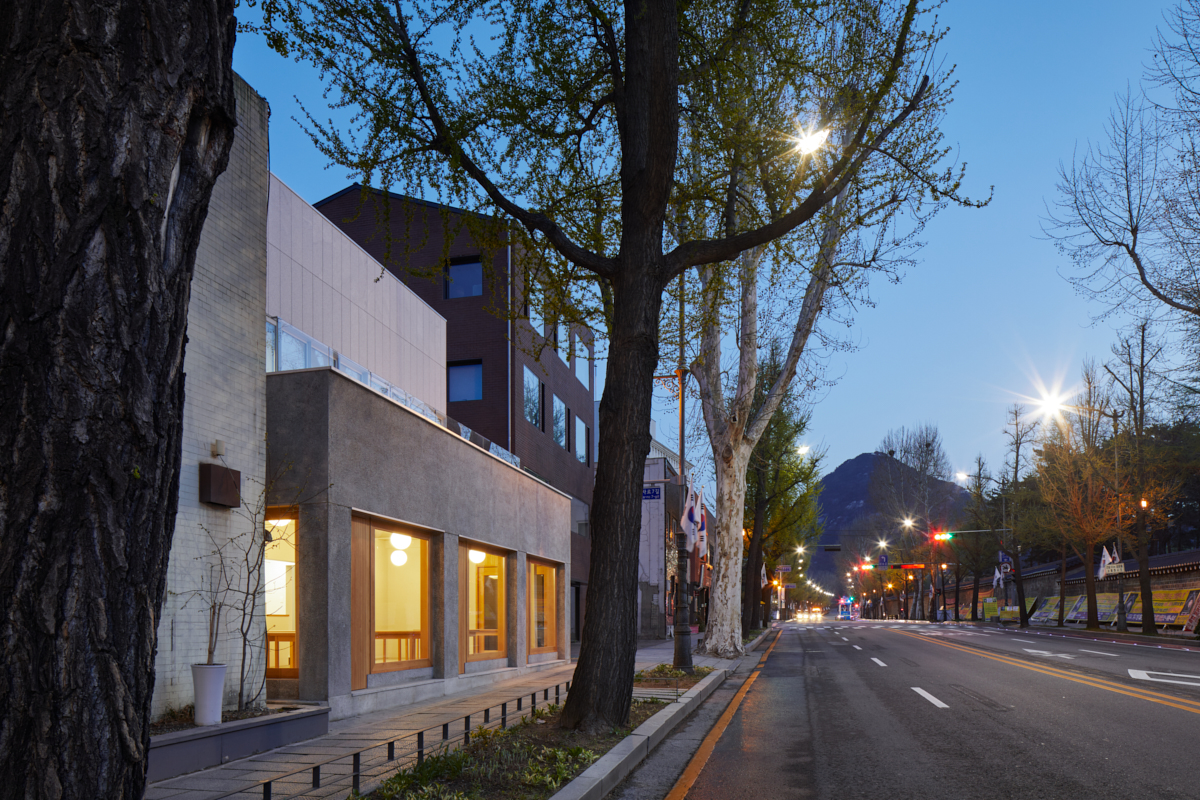 douglas fir, painting on plaster board

Lee Doeun, Yim Hyunjin
Lee Doeun studied architecture at Korea National University of Arts in Seoul and London Metropolitan University in London. She worked for M.A.R.U. and Suh Architects before establishing her own practice with Yim Hyunjin in 2013. She is teaching at Korea National University of Arts since 2015.
Yim Hyunjin studied at Hanyang University and Seoul School of Architecture in Seoul. He worked for M.A.R.U. and JINA architects before establishing his own practice with Lee Doeun in 2013. He is teaching at Chungbuk National University since 2014.
March 2019 No.616 Architecture Seoul Gyeongbokgung Palace yiwayim architects Buckwheat Flower House restaurant major repair overlap material scene
LIST
bookmark_border
favorite_border
58