An Art of Coexistence: Pavilion of Floating Lights 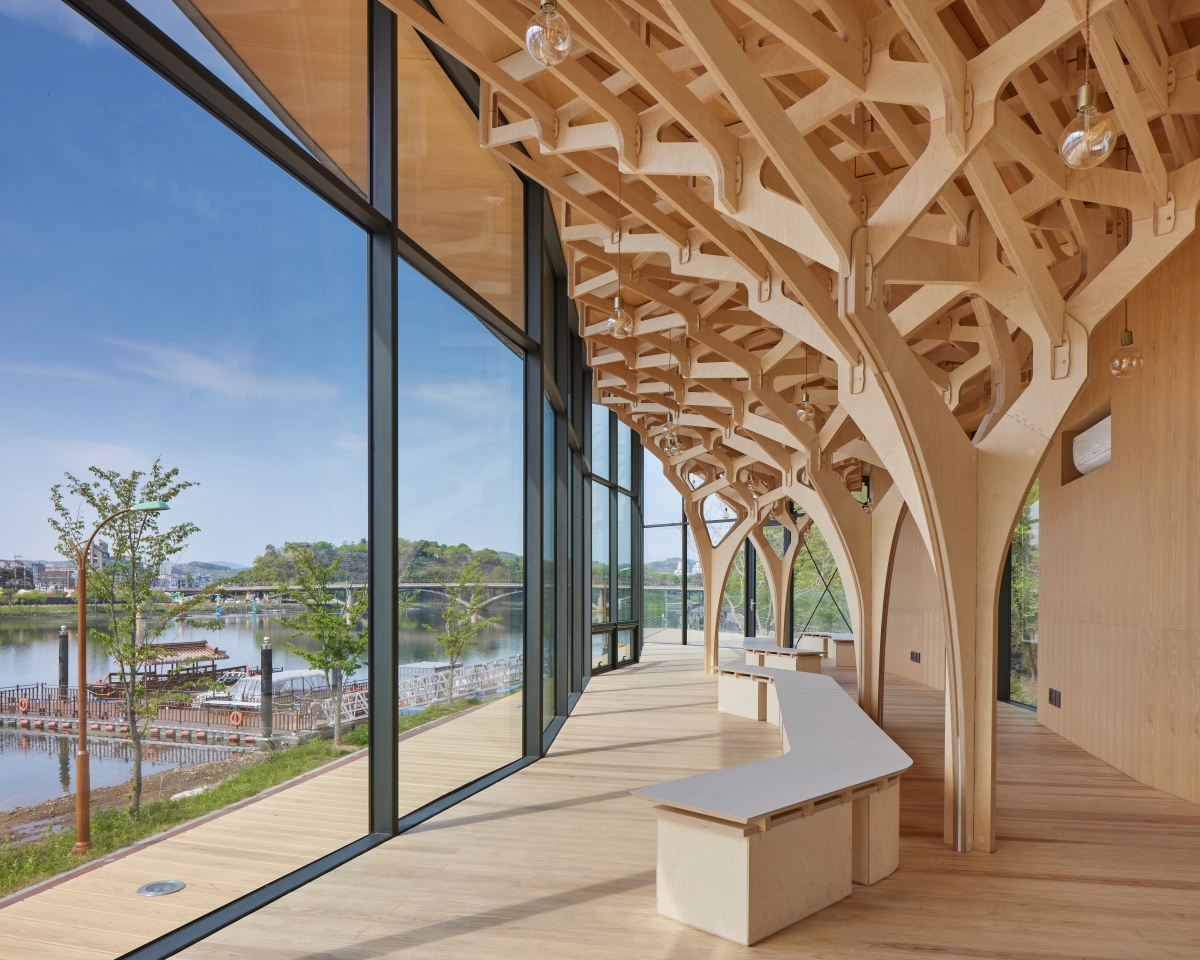 The Identity of Jinju’s Architecture

The architecture of Jinju is destined tobe evaluated in light of representative masterpieces of the era, such as Chokseongnu Pavilion (14th century), Jinju National Museum (1984), and Gyeongnam Culture & Art Center (1988). The evaluation is not only about their architectural value, but also about interpreting tradition. Modern interpretations of tradition have often been points for debate in our architecture. There is no need for contemporary architecture to foster a relationship with tradition, but the architecture of Jinju is different. Against the backdrop of memories of Namgang River and the historicity of Chokseongnu Pavilion, interpreting direction of traditional architecture in Jinju National Museum and Gyeongnam Culture & Art Center strongly defines the identity that is required for the architecture of this city. Therefore, architecture in Jinju finds it difficult to avoid the challenges presented by Kim Chung-up and Kim Swoo Geun. In addition to this, the significance of the site of the Pavilion of Floating Lights offers new value to the project. From an urban perspective, the Namgang River flows through old city centre of Jinju, with Chokseongnu Pavilion and Jinju National Museum in the north, Gyeongnam Culture & Art Center in the east, and the former Jinju Station cultural regeneration project site in the south. The site, located on the west side of the cross-shaped city axis, has an important status regardless of the scale of the future project. In response to the significance of the location and the demand for new architectural proposals that are sensitive to the cultural identity of Jinju, the Pavilion of Floating Lights presents the ‘Chokseongnu Pavilion of the 21st century’.

In the Pavilion of Floating Lights, tradition is regarded as the beginning of creation rather than as succession. This attitude can also be found at the Jinju National Museum and Gyeongnam Culture & Art Center. It is obvious that the large roofs common to traditional architecture such as Chokseongnu Pavilion and its columns have been a source of inspiration for modern architecture in Korea as well as Jinju. The wooden post-and-lintel structures of traditional architecture have here been transformed as concrete columns and capitals at the Gyeongnam Culture & Art Center. Traditional architecture’s deep eaves, made by rafters, in Jinju National Museum were revised as a roof with overlapped horizontallines. The works of the two masters are closely related to the architectural style of the time. Koreanity created by grafting International style and the Japanese Imperial Crown Style of the early 20th century, and postmodernity to locality, became the theoretical background to the modern and contemporary architectural heritage of Jinju. However, the Pavilion of Floating Lights takes shape following two precedents by which elements of traditional architecture were borrowed and morphologically changed based on architectural style. The Pavilion of Floating Lights announces the reinstatement of wooden architecture. The post-and-lintel structure method, like gongpo of traditional architecture, is reborn as six trees supporting the pavilion through design computation. The wooden frame structure, which pays homage to the six columns on the front of Chokseongnu Pavilion, reproduced traditional methods in a modern way, consisting of only combined members by a minimum of nails and adhesives. They developed assembly manuals using 3D drawings to help constructors understand the structure of only non-standardised members of different shapes. In addition, the introduction of augmented reality (AR) to the construction process increased efficiency. Although the motif was taken from traditional architecture, the method proposed in design and implemented in construction could be entirely possible through the active use of the latest technology. In this way, the Pavilion of Floating Lights shows the possibility that traditional wooden structures can be reborn with modern engineered wood and digital fabrication. The building is hybrid architecture, drawing on the past and the present in terms of its reinterpretation and implementation of traditional methods and its active use of technology.

Traditionally, the nugak was built for the private meetings of a certain class or military observations. Now, they are understood as pavilions, a western architectural type, and departing from its original meaning. In fact, today it is an extinct architectural type. The Pavilion of Floating Lights reproduces the meaning of the nugak. The elevated floor of the traditional nugak has become a platform for the public in the building. It becomes a place where citizens can observe both the surrounding natural environment, such as Namgang River and Mangjinsan Mountain, and the cityscape. Glass walls on the front, left and right sides allow visitors to experience the surrounding environment that changes with the time and season. The glass, carefully selected for its high visible transmittance and thermal insulation performance, blurs the boundary between inside and outside and adds openness to the project. Projected to the outside through transparent glass, the wooden structure is recognised as an aspect of the façade. Here, structure not only forms interior space, but also becomes part of the exterior of the building. At the Jinju Namgang Yudeung Festival on an autumn night, the concept of openness means the opposite; turning into a lantern by being lit from inside, the architecture itself illuminates the Namgang River and serves as a festival venue for the city. Satisfying openness of a view and the symbolism of the façade and functionality for the internal environment at the same time, the project was constructed through careful examination of energy efficiency, insulation, and airtightness.Its eastern wall, which is the only blocked side, is as earthquake-proof construction and serves as a background symbolising the ‘coexistence of nature and artifact’. The eastern exterior, the first appearance for the visitors, contains the shadows of trees on Mangjinsan Mountain cast by morning sunlight, and the eastern inner wall contains the shadows of wooden structures cast by the evening sun. Through the openings between the walls, visitors can experience three different kinds of tree at the same time: natural trees, artificial trees, and tree shadows. The coexistence of nature and artifact, along with the coexistence of the traditional and the modern, is the ultimate message to be conveyed by this project. What would Chokseongnu Pavilion have looked like if it continued to developover centuries? The architecture of the nugak, which had a special purpose or was enjoyed only by a certain class, may have evolved differently from what we know with the development of technology and the rise of publicity. The Pavilion of Floating Lights is a new nugak, Chokseongnu Pavilion of the 21st century. 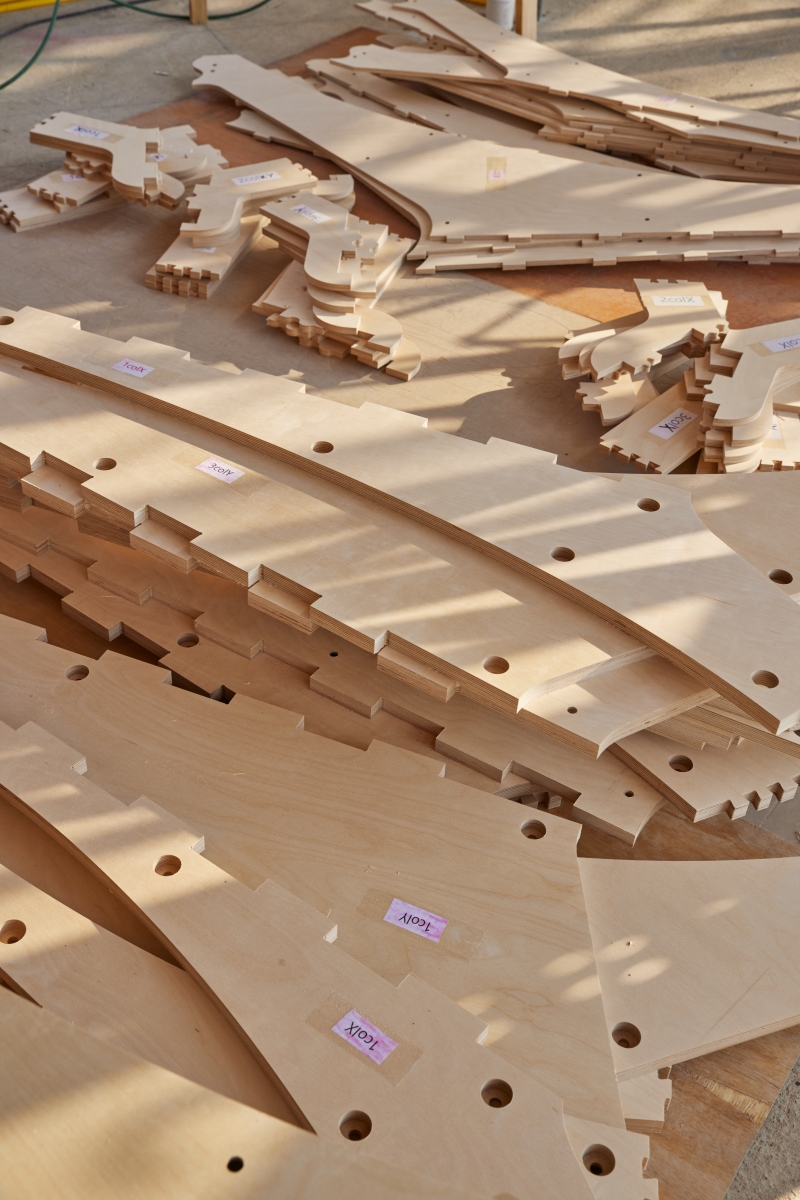 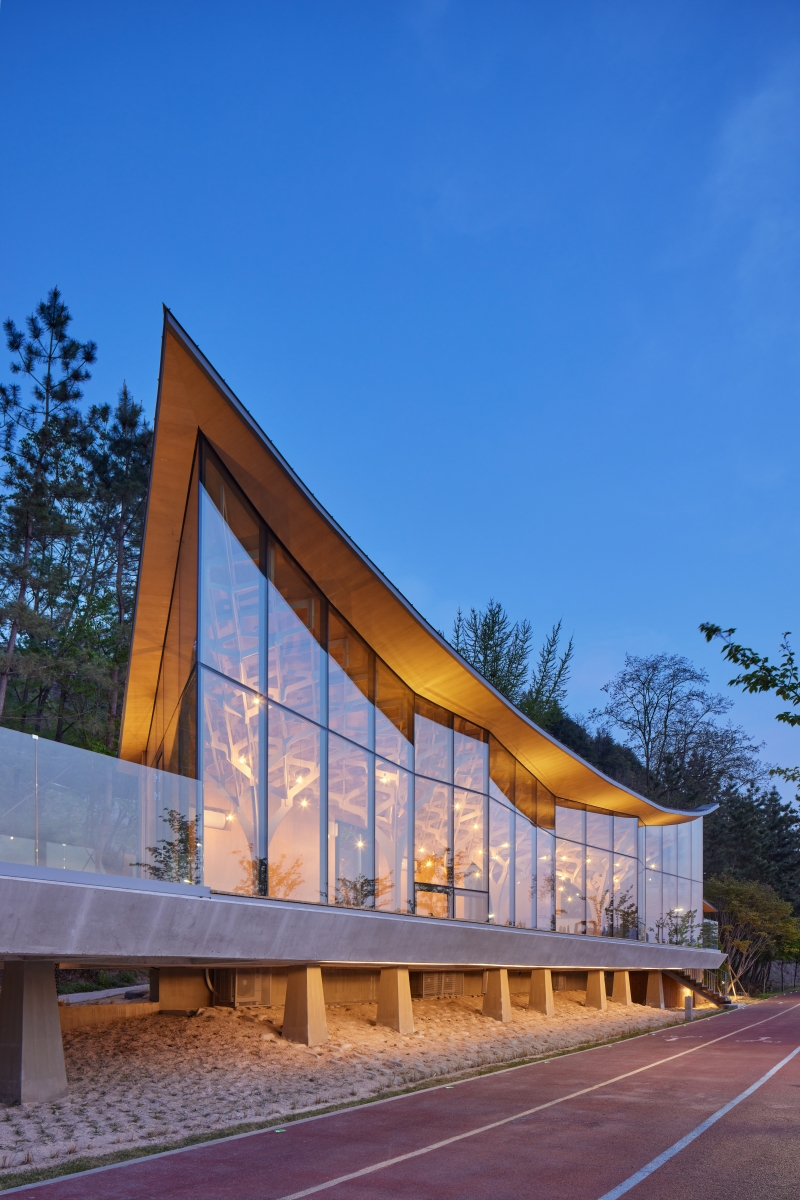 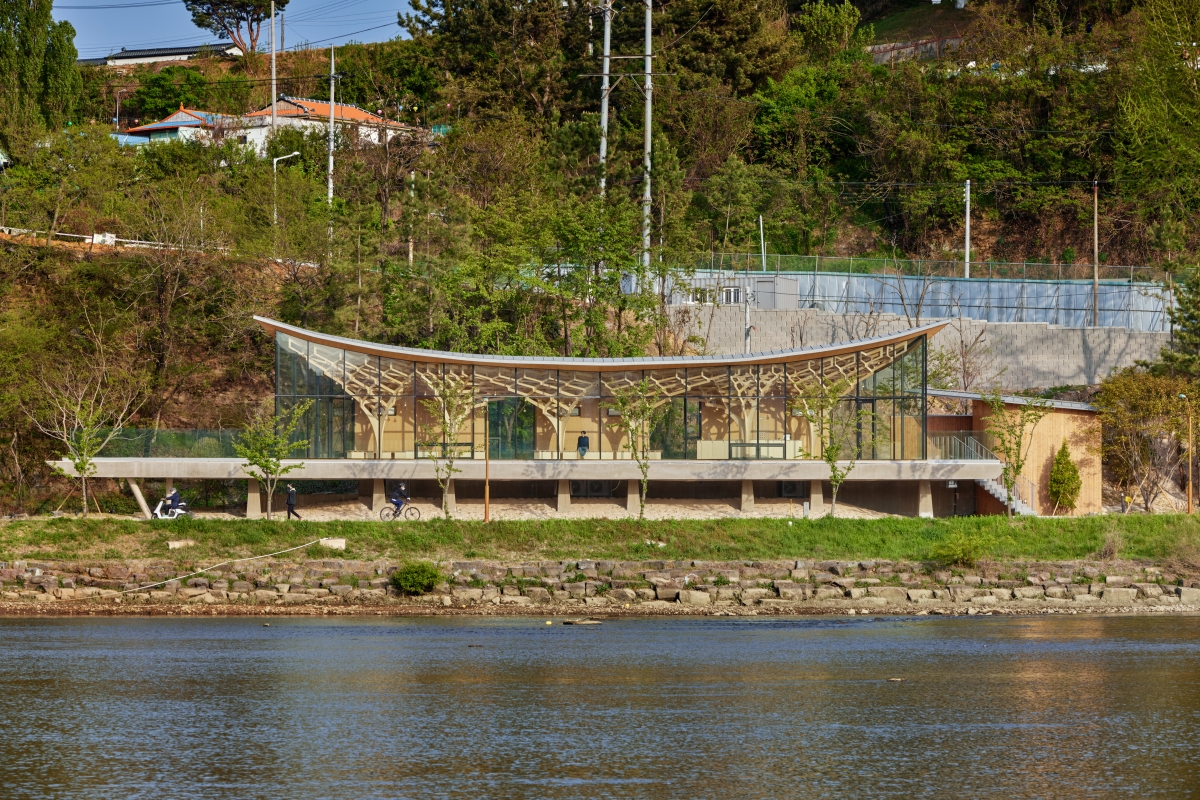 Jae K. Kim
Jae K. Kim is an architect, a researcher, and an educator. Currently, he is an associate professor at Hanyang University and a director of JK-AR. He studied architecture at Hanyang University in Seoul, and later the Massachusetts Institute of Technology where he was awarded Imre Halasz Thesis Prize. Kim has been awarded 1st Prize from Korean Wooden Design Awards in 2022 and 2019, THE GOOD PLACE AWARD in 2022, Architizer A+ Awards in 2021, and ect.
No.662 January 2023 Architecture pavilion Jinju Jae K. Kim traditional architecture Koreanity technology wooden structure post-and-lintel structure augmented reality nugak
LIST
bookmark_border
favorite_border
1