Digging Into the Memories of an Island: Isabu Dokdo Museum 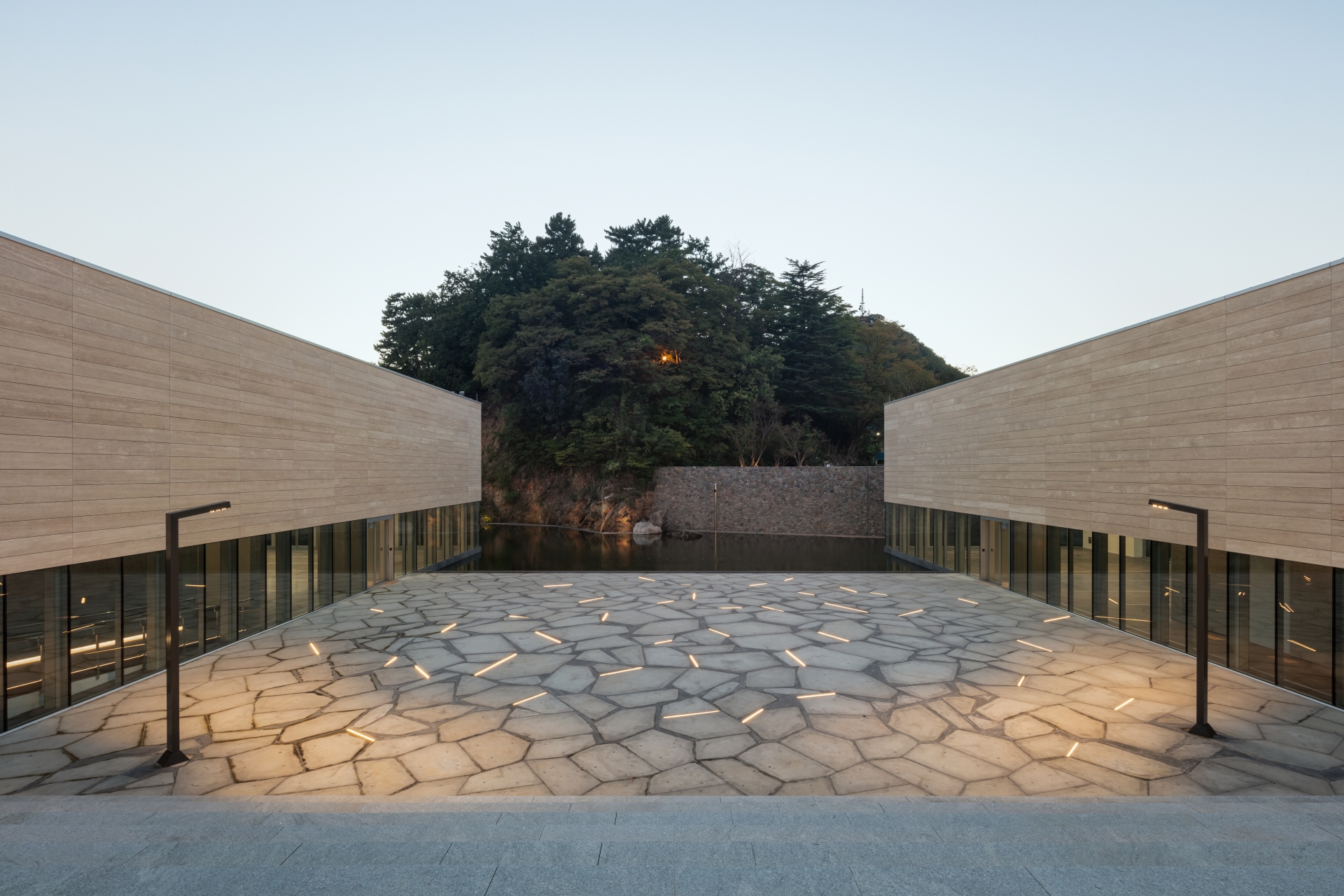 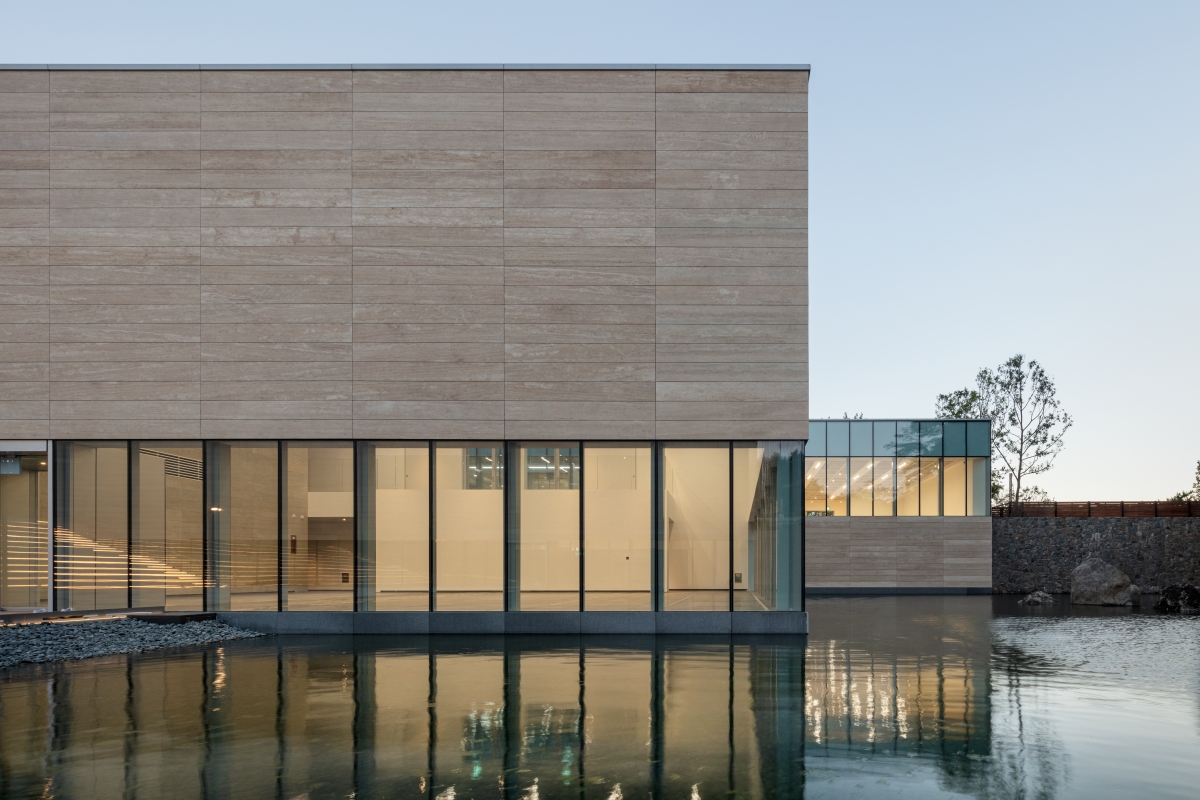 A Former Terrain and Its History

The site lies in Jeongna-dong, Samcheok-si, Gangwon-do. Samcheok Port is located to the east, with an industrial zone to the east and the south, a commercial zone to the north, and a residential zone to the north west. In A.D. 512 (the 13th year of King Jijeung’s reign), Silla general Isabu set off from this spot in Samcheok with his marine troops to conquer Usanguk, today known as Ulleungdo Island, Dokdo Island which was part of the Silla territory. Yukhyangsan Mountain, located at the centre of the site, was once an oceanic island at the time of Isabu’s departure, but has now become a mountainous region. Underneath this reclaimed land are the lower reaches of Yukhyangsan Mountain that was once an island. The lower part of the Yukhyangsan Mountain was excavated, the site was lowered to its former altitude, and water was introduced. The water introduced to this area adopts the form of a pond with the name Yukhyang-ji, relating it to Yukhyangsan Mountain and alluding to the image of an island on the sea. An exhibition space tracing the historic features throughout the newly revealed site, will come to play a role as new cultural site in Samcheok, and recover what in the landscape had been lost to the past.

The Isabu Dokdo Museum is composed of four features: the tourist information center, a territorial defense memorial hall, the Dokdo experience space, and a multipurpose community space. These four independent masses inform the composition of the exhibition and the way in which visitors engage with the exhibition, as well as ensuring more fluid circulation. The project, composed as separate sections, is simultaneously a single exhibition hall, as well as a place in which independent exhibitions can be installed. Marking a departure from the more passive approach of moving through an exhibition according to a prescribed order, controlling circulation, here it will be possible to move between the sections, or to experience the internal exhibition spaces and outdoor nature at intervals, or to move to a different spot and to rest while observing the exhibition, or to start from the midpoint and selectively view what one wishes to see. In between each section, the outdoor spaces which offer views of the surrounding natural landscape have been filled and organised to connect, bringing the architecture and landscape into harmony. The visitor can communicate not only with the exhibited artefacts within the exhibition hall, but also with the outdoor nearby spaces, visiting not only to observe the exhibitions but to enjoy and appreciate this place. 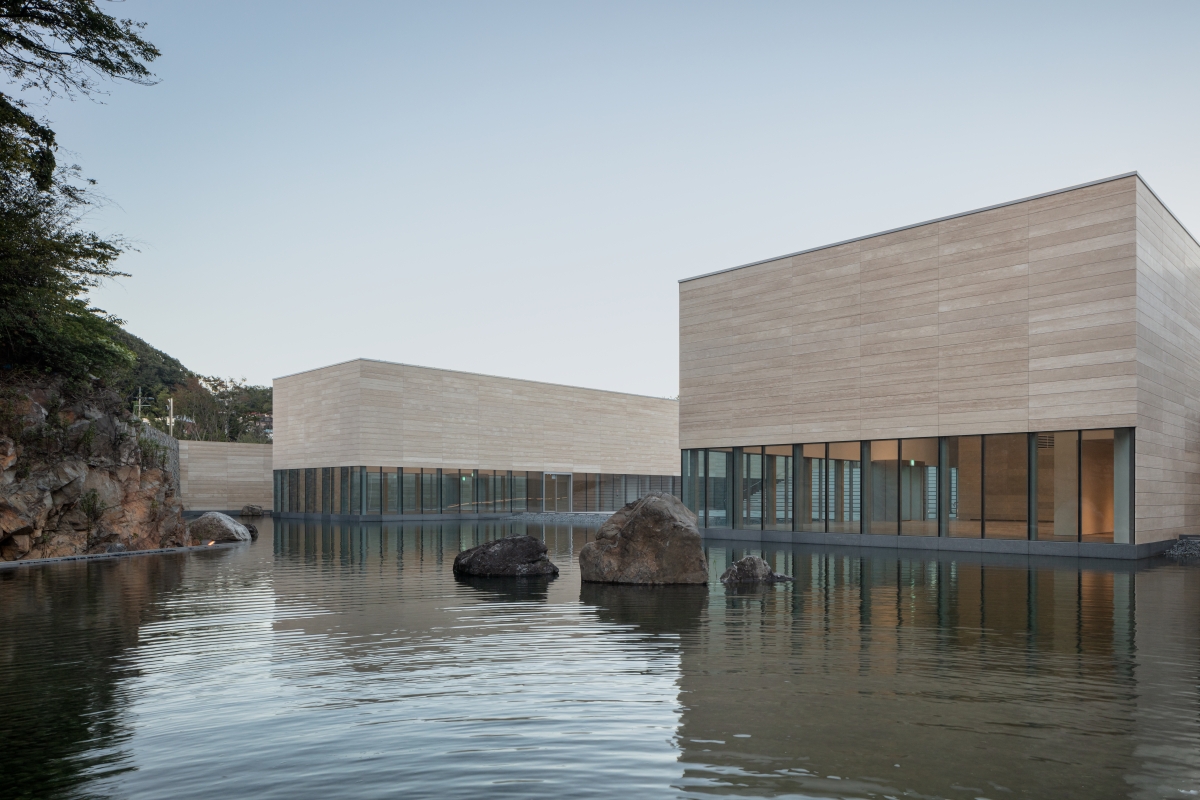 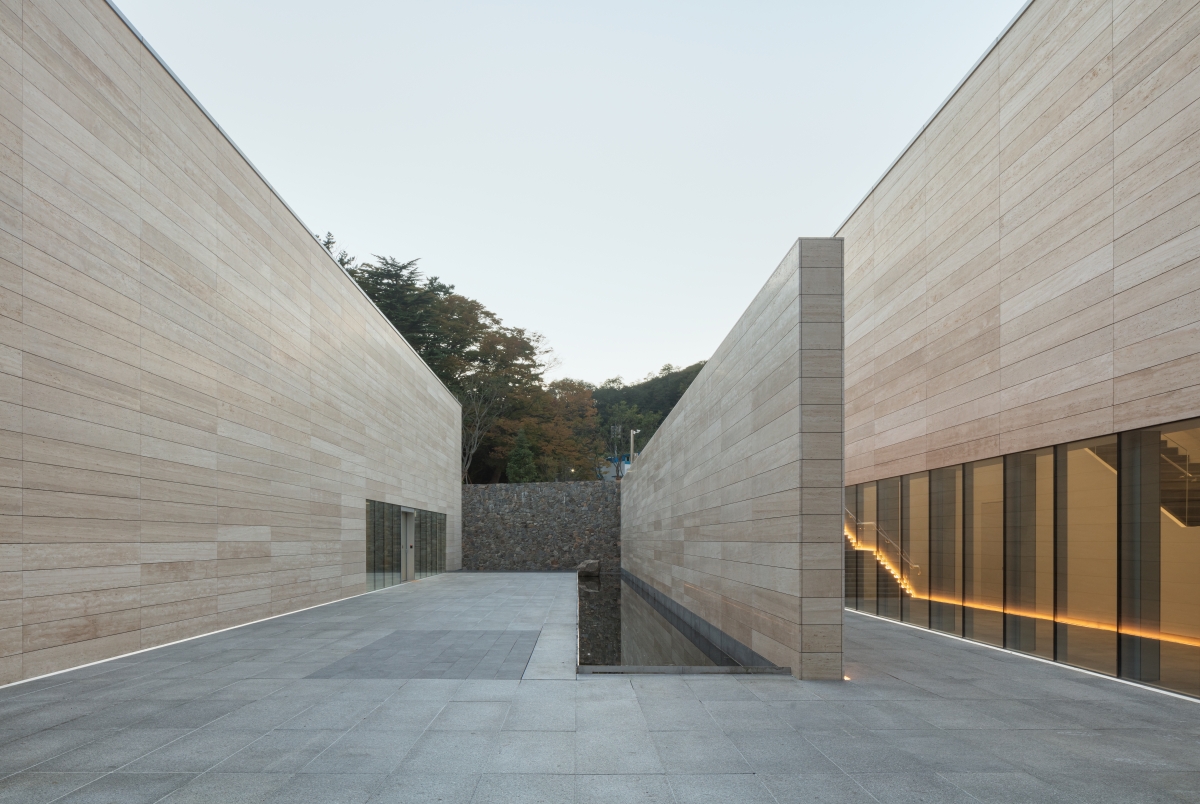 The visitors to the Isabu Dokdo Museum begin their exhibition experience at the tourist information center. The upper level of the building can be entered from the road level, where there is a café which can be used by visitors and locals. Descending to the lower levels using the stairs, an entrance lobby and information center where one can acquire information about the Isabu Dokdo Museum can be found. This is the point at which one really begins to experience the Isabu Dokdo Museum. Exiting from the tourist information center, to take the pathway to the territorial defense memorial hall, one is met by a wall at the forefront, composed of rubble masonry. This has been introduced to reflect on the historical significance of the site by preserving the place where Samcheokpojin-seong Fortress was once located as a marine military base for the Silla empire. Following the outdoor steps at the side of the tourist information center, and mounting them to the upper level, one comes across a fortress road and trail along which the location of the Samcheokpojinseong Fortress is engraved in the ground. Upon entering the second section, the territorial defense memorial hall, a high-ceilinged lobby greets visitors, and the light from the windows above fall into the space through the stone finished walls. The space is simultaneously a waiting room for the exhibition visitors, as well as a lounge in which people can rest and enjoy the views. The stone plaza which is located between the territorial defense memorial hall and the Dokdo experience space is directed towards both Yukhyang-ji and Yukhyangsan Mountain. It is a place in which to gain a fuller sense of Dokdo Island, and where one can sit in quiet meditation or experience the diverse range of activities. In the lobby of the Dokdo experience space, which can be reached by passing through the stone plaza, one can appreciate the lower section of the Yukhyangsan Mountain rocks through the window. The slope, which flows around the Dokdo experience space, guides people towards the upper levels, and here, at the lobby, it allows one to observe, once again, the exhibition with a top-down view. Crossing the bridge connected to the south of the Dokdo experience space connects it to a multi-purpose community space. The visitors cross the bridge to appreciate the lower reaches of the Yukhyangsan Mountain and Yukhyang-ji once again, and the multipurpose community space to which they arrive after crossing the bridge can be used as a multipurpose space for resident facilities, as a book café, for lectures, events, etc.

The upper sections of the territorial defense memorial hall and the Dokdo experience space were finished with solid stone, while the lower sections were finished with transparent glass. The glass across the lower section allows the inside and outside spaces to communicate, and to permit observation of the exhibition and its spaces from the outside, and for those inside to observe the natural landscape of Yukhyangsan Mountain and Yukhyang-ji outside. In the multipurpose community space for the local residents, the upper section also employs glass to emphasise a sense of openness. The project was finished with travertine stone, in harmony with the natural surroundings, and by using a 2400×300mm module, the direction of the long and narrow mass was emphasised. The outlets for the lower section of the mass were composed of 1200mm, half of the stone module, and the floor indoors was finished with a 600×600mm dimension stone. As such, the indoor and outdoor areas of this project interconnects, not only in terms of its visual elements or circulation, but also in unifying the modules indoors and outdoors. 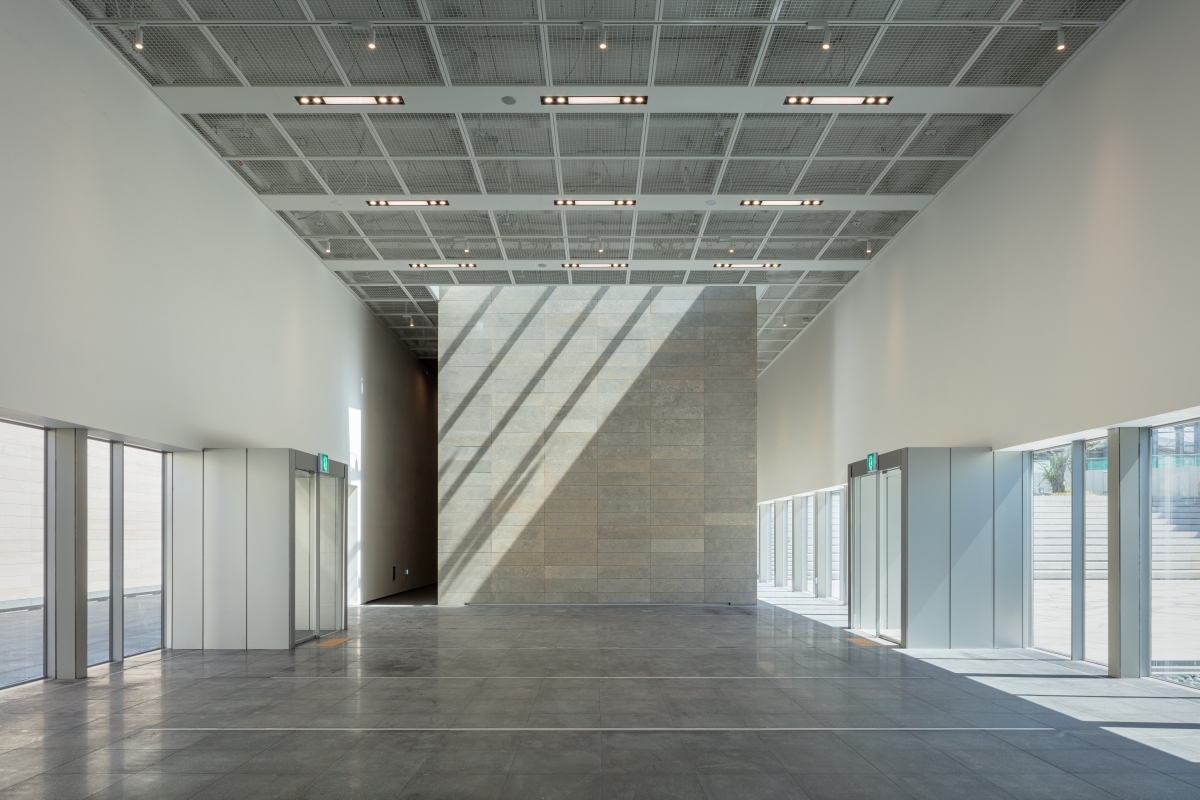 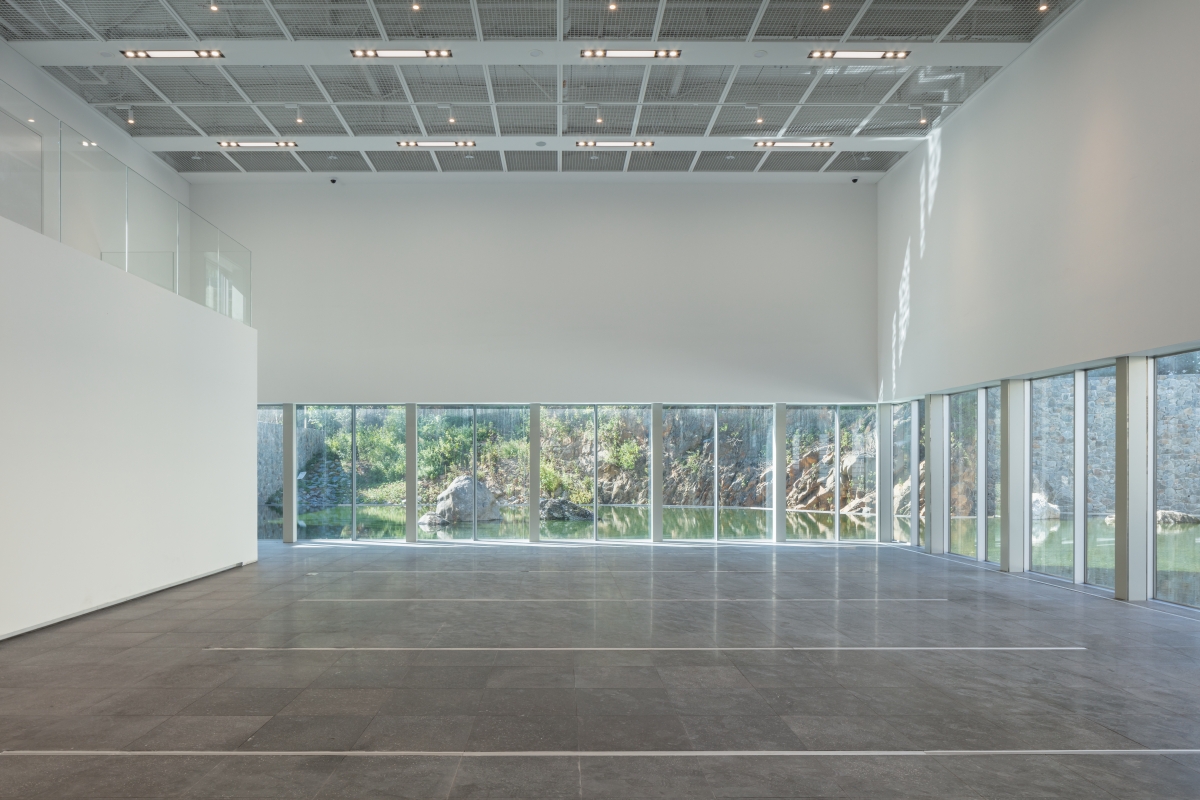 The outdoor spaces around the building were planned so that the architecture and landscape would harmonise and blend in with the surrounding landscape, rather than becoming too intrusive or imposing a structure. The outdoor spaces were also seen as potential exhibition spaces, with the aim of establishing a foundation for a scenic experience. If originally the main point of attraction was to be the view of the lower section of the bedrock from the outside and inside of the exhibition hall, revealing as much of the lower section of the Yukhyangsan Mountain as possible, then the discovery of part of Samcheokpojin-seong Fortress as Silla era relics on the site meant that part of the building had to be reassigned, and the Yukhyang-ji was reduced in size and partitioned with a wall, so as to protect the relics. It remains regrettable that the former view of the lower section of Yukhyangsan Mountain was largely modified and recast as a wall. 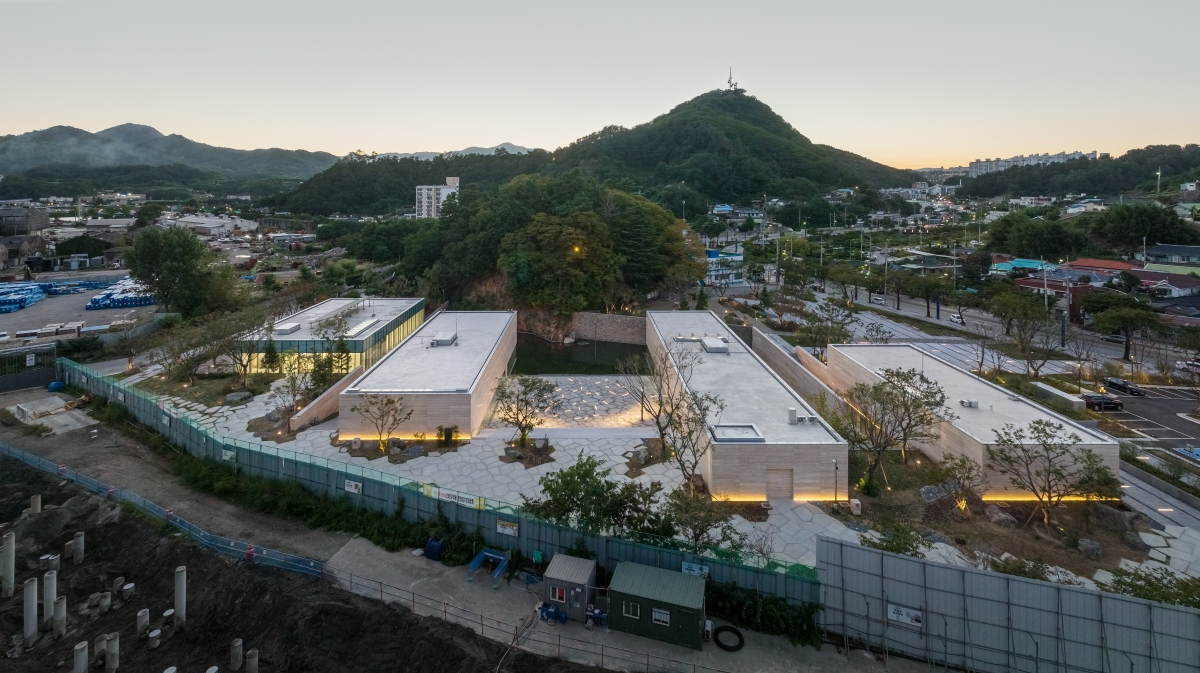 Park Chungwhan
Park Chungwhan is a co-principal of Simplex Architecture as well as a professor at Hongik University. He received his Master of Architecture from Harvard University Graduate School of Design in 2011 and holds a Bachelor of Science in Architectural Engineering from Seoul National University. He began his professional career working at MASS STUDIES in Seoul, where he gained experience in a wide range of projects. He continued his career at Richard Meier & Partners and Asymptote Architecture as a project architect. He is a registered architect in New York and a member of the American Institute of Architects as well as a LEED accredited professional, and public architect of Seoul Metropolitan Government.
Song Sanghun
Song Sanghun is a co-principal of Simplex Architecture. He received his bachelor of Architecture from University of Seoul. He has held primary roles on a wide range of projects in various firms in Seoul, as a project architect. He is interested in a wide range of design field including urban design, architecture, and landscape architecture. He is a registered architect in Korea, and a member of the Korea Institute of Registered Architects.