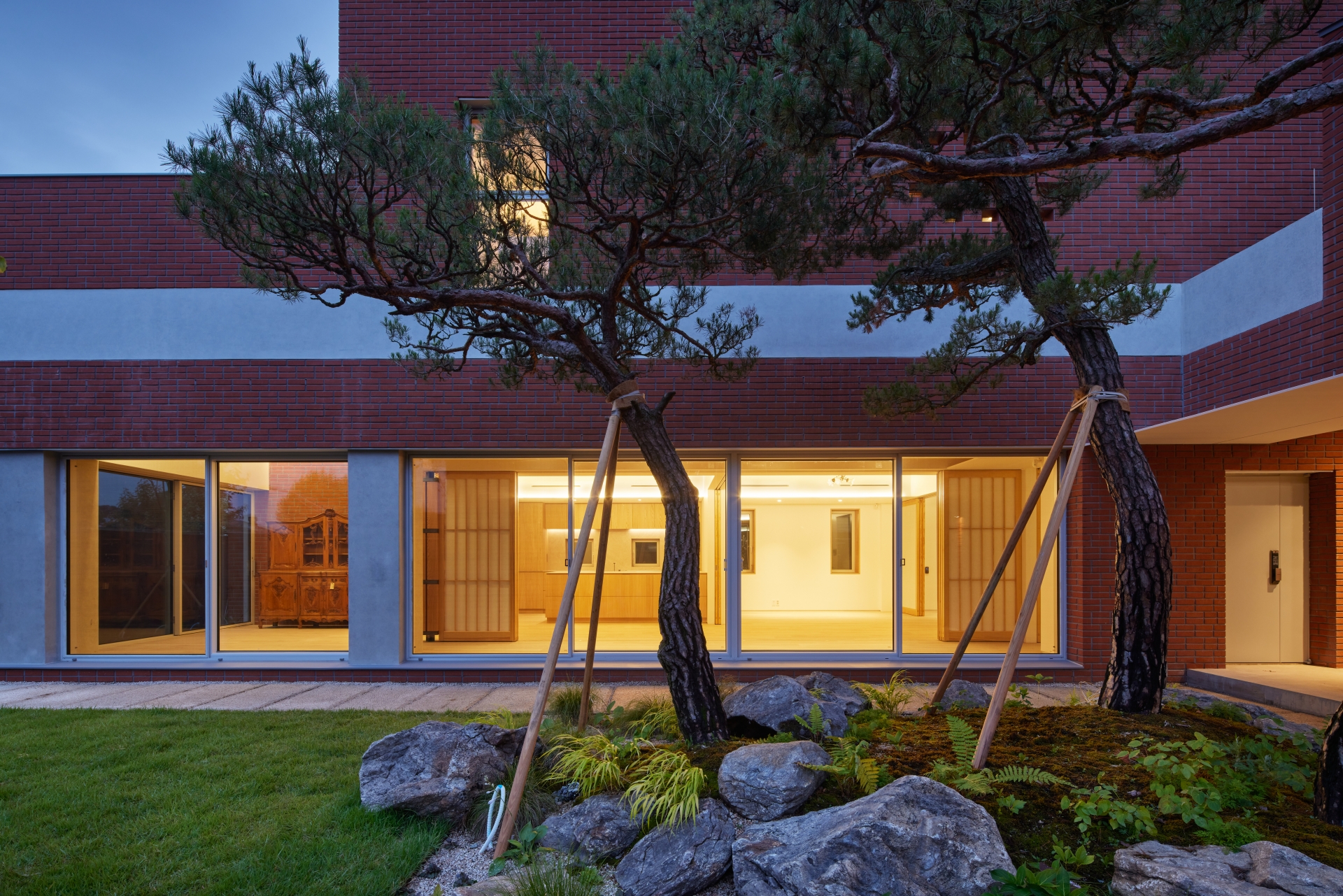 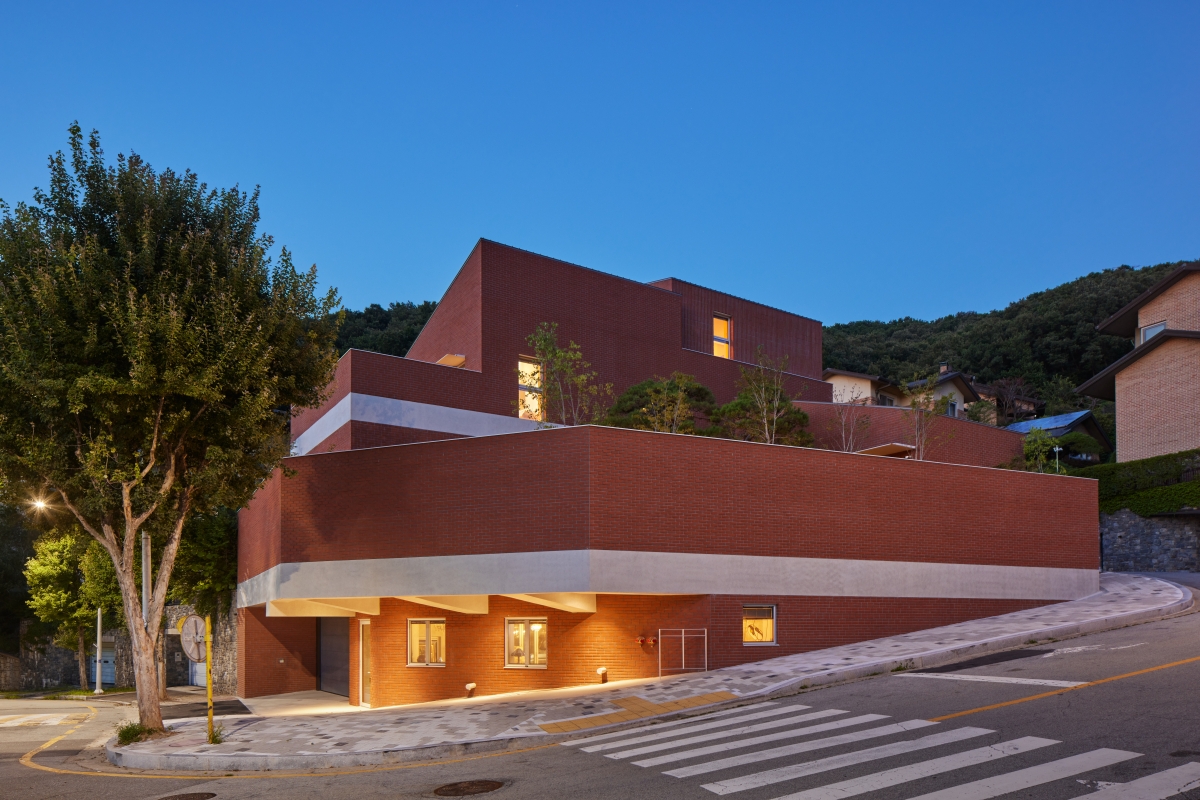 Jeokhoje (a house that resembles a red tiger) is a recently built home following the demolition of the previous building on this site. The clients have lived here and mused upon a new house for a long time, which has been fed by the rich sense of heritage and memory in the surrounding community. As a consequence, they must have visualised their new home in greater detail than the architects. The clients chose to work with young architects whose experience is limited to one project since the opening of their studio. The house is located at the entrance to the village which is nested along a slope leading in the southwest direction towards Bulgoksan Mountain in Seongnam-si. A family workshop was built a basement floor that connects with the road. It is a four-story mixed-use house accessible from the opposite side of the road, leading uphill, with the first and third floors reserved for residential space.

Throughout the design process, the house, which used to be two stories above ground, has become three stories, and some of the outdoor space have become indoor spaces, gradually transforming into a massive house. The client’s longing for a tall and impressively large home might have posed a certain challenge to the architects so as to make a house that did not appear inappropriately gigantic. Despite the high fences alongside the boundaries of the site, the house does not appear so vast or monumental. The entire volume is divided into three compartments using a concrete strip at the bottom of the fence and on the upper side of the first floor wall, and there are setbacks on each floor while separating the roof for each volume and stacking red bricks in a different manner floor by floor. In response to the clientʼs request for a tall and large house, the architects kept the overall volume but created compartments. Just because it grew in size does not mean it looks like a massive house. NOMAL explains this outcome ‘as a result of pursuing balance, diversity and flexibility throughout the design process, and sidestepping manifesting and mannerism’. Varied requests by the clients are accepted as a constant in the equation, treating it as an assignment that needs to be resolved proactively. The architect focused on figuring out this equation throughout the design. A large house that does not appear to be massive has now become one of the prevailing outcomes of NOMAL’s balanced approach, which has been dubbed Nomalance, in their pursuit of diversity and flexibility.▼1 However, there remain some unanswered questions. Do the so-called distinctive ‘familiar elements’ in the structures of the village, that is a roof and a divided volume in which many buildings are contained, still remain familiar in a village where a structure such as Jeokhoje has been built? Aside from the formative approach, what’s the relationship between the elevation of the first ever built neighbourhood facility on the basement floor and the village? Won’t the volume of the ground level segmented by overly precise proportions and rhythms have divided the entire village into one lump? All of these questions converge on the suspicion that the result of ‘a house that doesnʼt look big’ may not be a solution found in the design process, but another constant in the equation. It is no longer a Nomalance that already existed on the right side of the equation, along with the desire of the architect, and not the unknown.

1 NOMAL introduces itself as an open group of architects who want to create new and extraordinary spaces by slightly changing the meaning of ordinary elements in our daily lives, in much the same way that they removed R from the word ‘NORMAL’ while borrowing only the pronunciation. NOMAL’s process produces Nomalance (NOMAL+balance), an outcome that is a mixture of the characteristics of each individual project and NOMAL’s aspirations. It is a practice that seeks greater diversity and flexibility through their design process, not a declarative nor a self-replicating architecture. 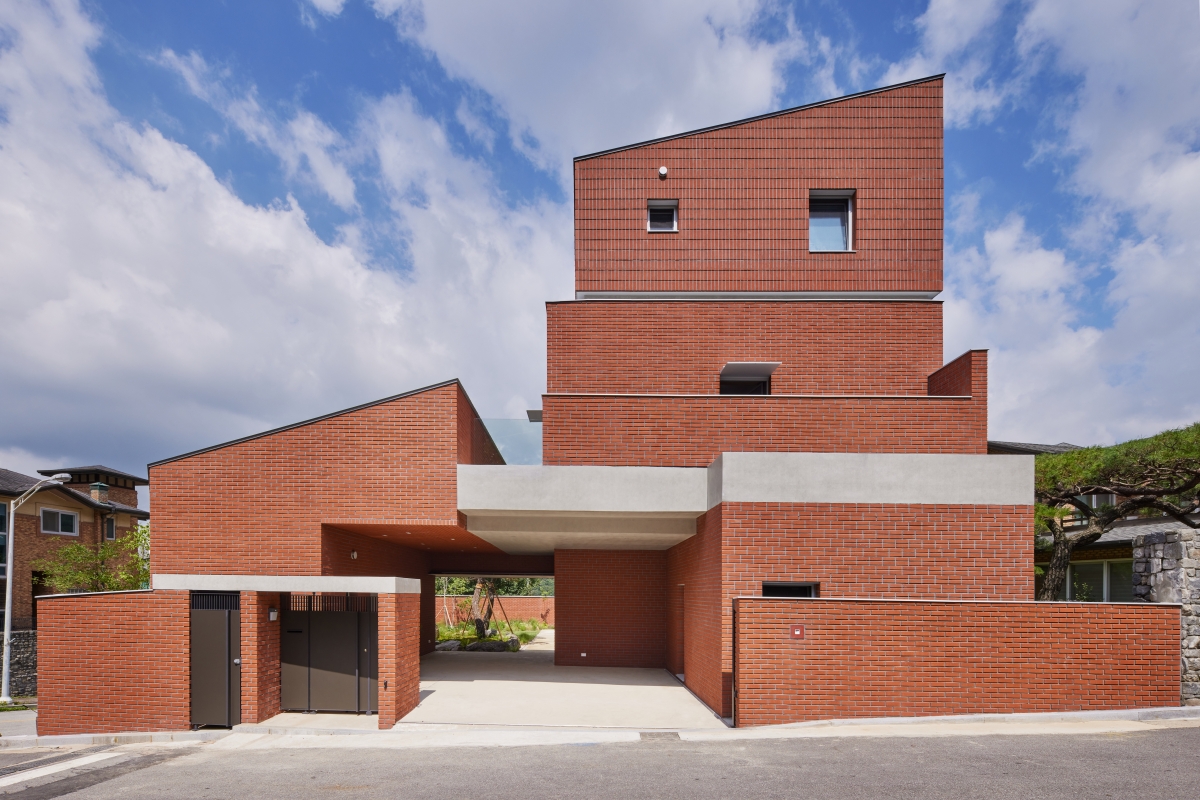 On the upper reaches of the road, you enter the garden between a detached building and the main building, and when you enter the front door of the main building, you face the living room, the kitchen, and the dining room, which are the central spaces in the house. The NOMALx + CLIENTS = NOMALANCE Kwon Hyungpyo co-principal, BAU Architects three spaces facing the garden to the south are also the central spaces of the house. This faces the garden across four sets of Korean sliding doors and corridors. A sliding door is also placed between each space so that it can be used in a variety of ways. The variations in the space surrounding the garden provide appropriate tension to the boring and loose relationship between the large garden and the interior space of the large house, and actively eliminate the inconvenience of vertical movement of the four-story house. This normal balance, which carefully organises the interior and exterior spaces and coordinates the relationship in various formats, provides an interesting daily life for the family. The bedrooms on the second and third floors have terraces with wall handrails on the outside of all rooms to protect privacy, and provide a visually open space through a courtyard. All the interior elements, from the opening of the upper porch connecting the first and second floors, to the middle area of the second floor, to the open wall between the bedroom and the bathroom, were properly considered and meticulously organised according to the mundane everyday life of the clientʼs family. 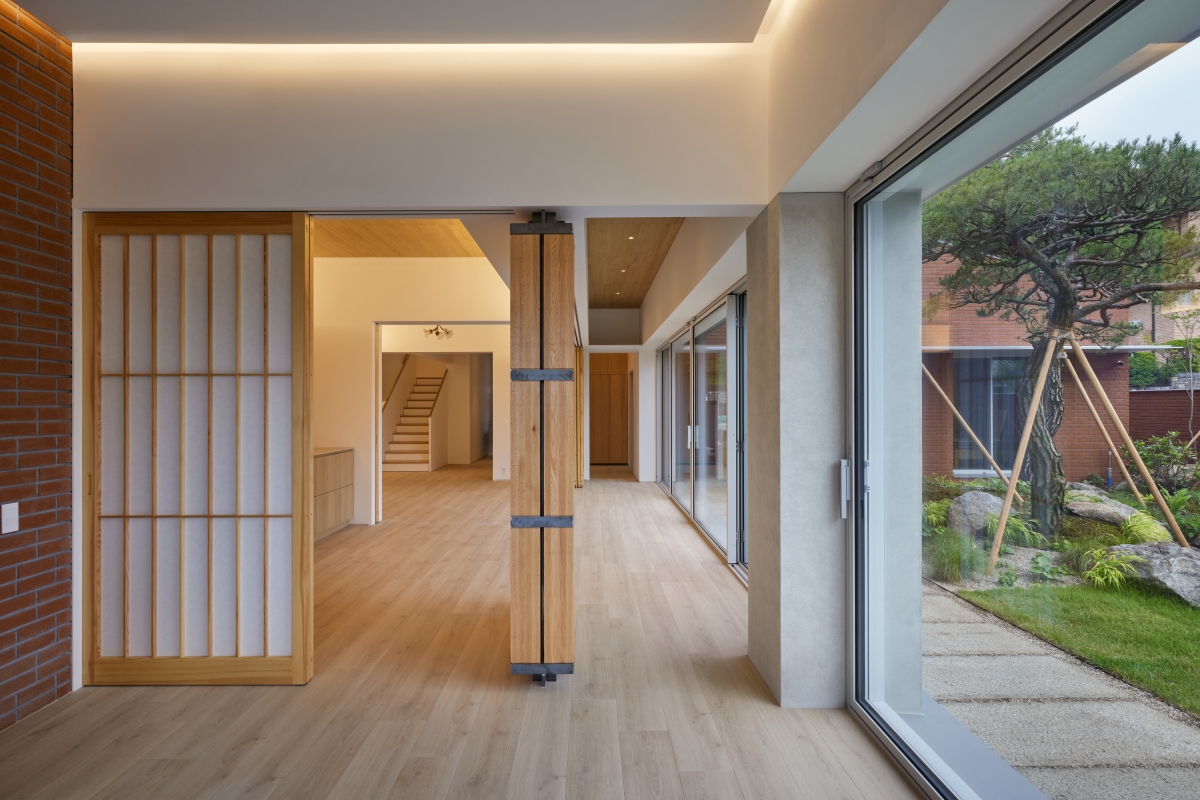 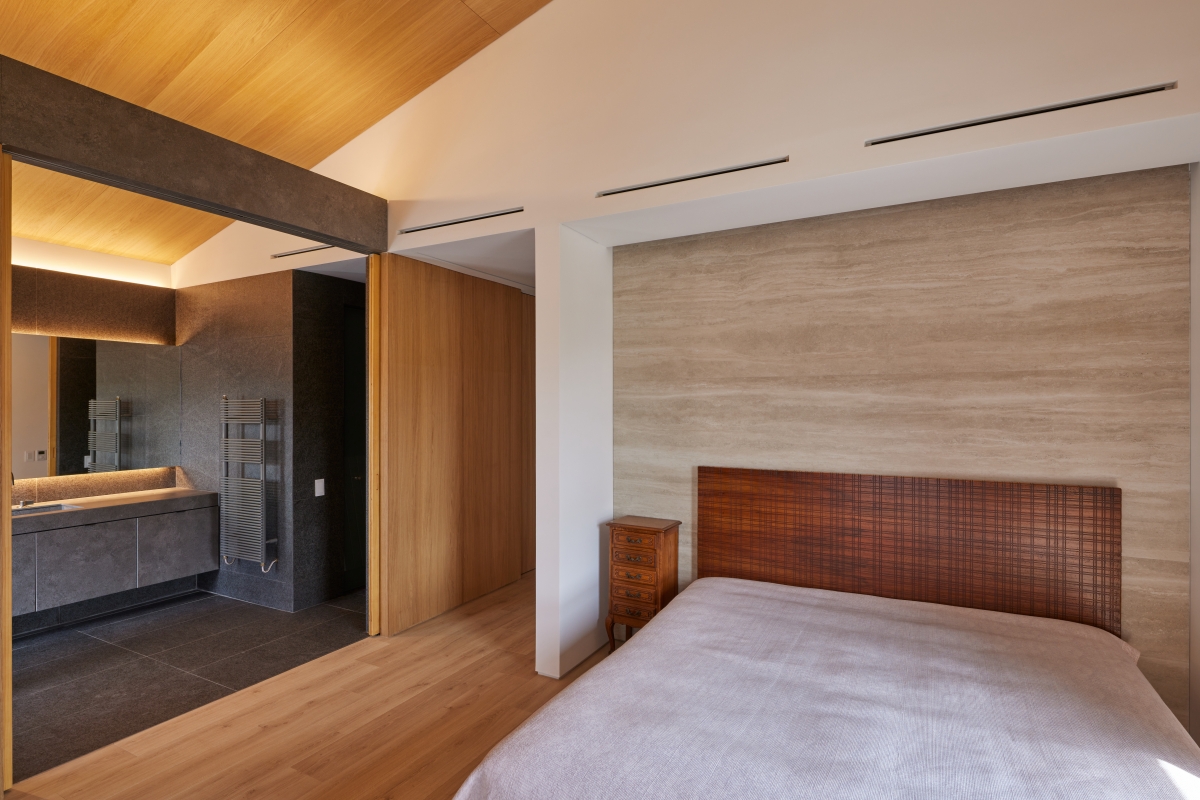 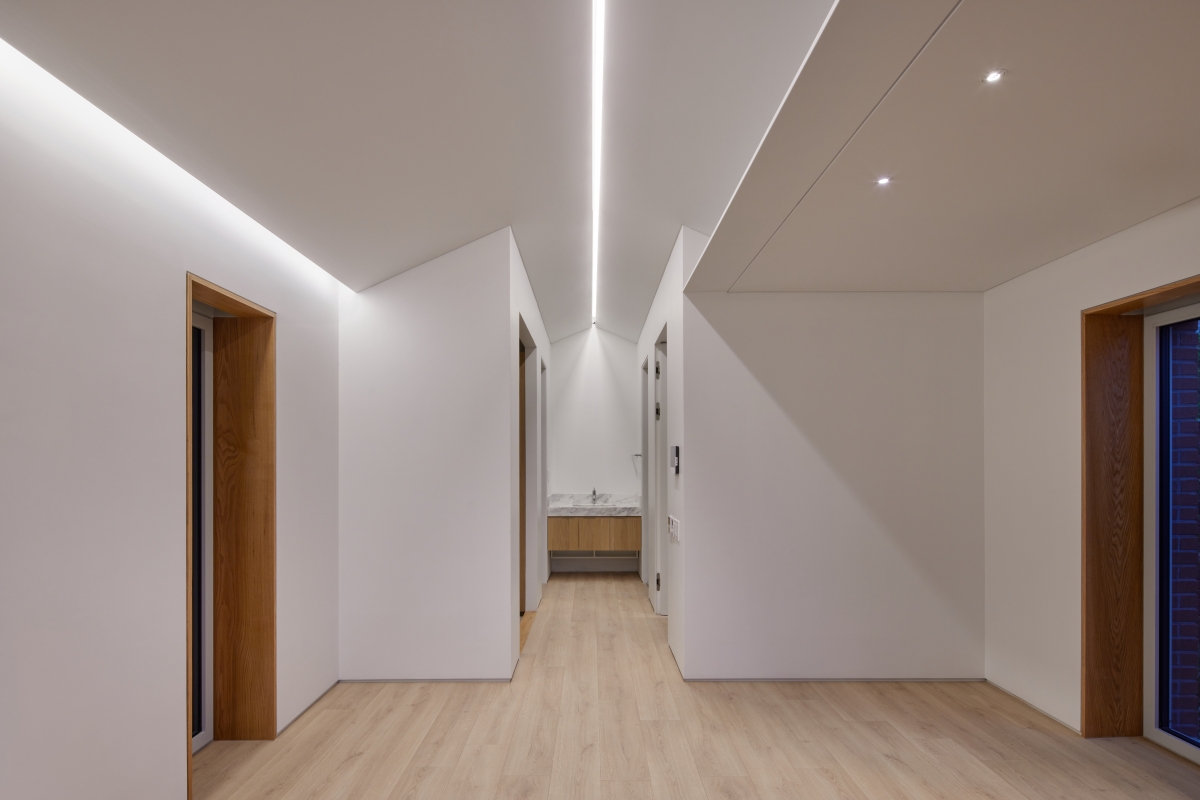 The Gap Between Ideas and the Built Environment

The underground workshop, above the ground, retreats under a fence surrounded by site boundaries, creating a small crack in the overall appearance of strict proportions of concrete beams and rhythms to support the garden and fence. Although the vocabulary differs from the overall structure, it is an element that demonstrates a sense of affinity with the village without losing balance. Thanks to this, one might think it would be a good idea to run there and avoid the rain if it suddenly begins to pour. A similar element is the wooden pillar installed to secure the sliding door between the kitchen, dining room and corridor inside. The Barcelona Pavilionʼs cross-shaped metal column and Carlos Scarpaʼs wooden joint, together with an iron strip seen in a Korean heritage, have been applied to single column. As with concrete beams, the existence and role of these pillars are interesting. Depending on the position of the sliding door, the column becomes an end of an independent wall or an angle between the two walls. One element plays various roles and digests all the roles naturally. In addition to the coherent architectural vocabulary that runs through all the large and small parts of the house, there was a wit of young architects in each space where the neat and solemn space was felt to be excessive. The high quality of completion in the internal and external finish reveals the passion of the three architects who practice in the same office on site after opening of their studio. Following a long conversation with the architect after exploring Jeokhoje, the reality of the resulting disappointment and inconvenience that remains was not architectural, but lays with language and writing. Perhaps it was because the gap between the architectʼs thoughts and constructed reality felt too wide. We should not avoid contradictory situations in which we are outwardly compliant but difficult to agree with within. When you empathise with the various conditions of the project, including the clientʼs needs and surrounding context, and fully internalise, they will face the Nomalance result of building the architectʼs thinking. 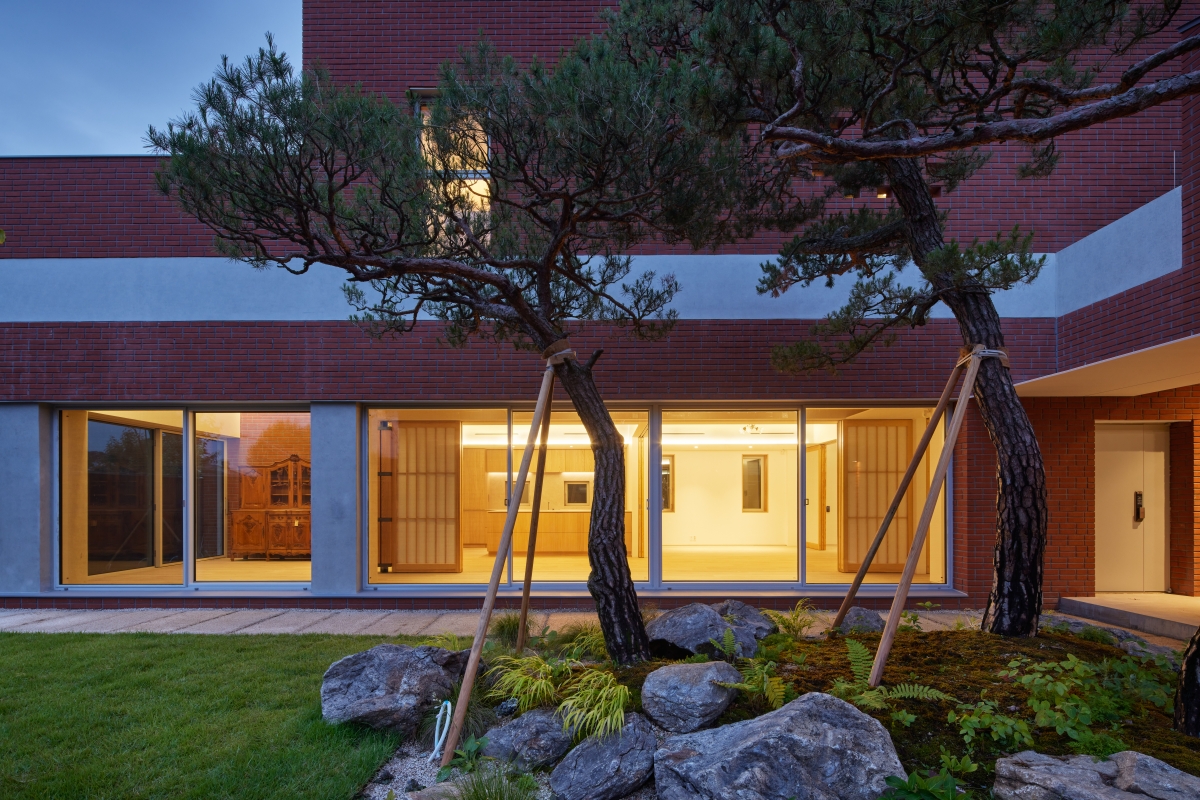 Cho Seyeon
Cho Seyeon graduated from the Department of Architecture at Parsons School of Design and he worked at studio ai architects New York branch and WISE ARCHITECTURE. Cho established NOMAL and is working based on his concerns about planning and filling out the elements that people and spaces come into contact in everyday life.
Lee Bokki
Lee Bokki graduated from the Department of Architecture at Kyung Hee University and he worked at WISE ARCHITECTURE. Lee joined NOMAL and his work is informed by his concerns about good build quality in everyday space through the perspective of materials and the properties constituting architecture.
Chai Minyuk
Chai Minyuk graduated from the Department of Architecture at the Korea National University of Arts and he gained practical experience at WISE ARCHITECTURE and Terminal 7 Architects. Chai established NOMAL and is working on projects informed by his concerns about the value of architecture and space in everyday life, paying close attention to urban and social phenomena.
Kwon Hyungpyo
Kwon Hyungpyo has run the BAU Architects with Kim Soonjoo since 2009. He researches and works on various types of neighbourhood living facilities and residential spaces, and designs and experiments with various types of play spaces for children. Kwon won the Korea Young Architecture Award in 2012 and the Gold Award at the Gyeongsangnam-do Architecture Grand Prize in 2017.
No.660 November 2022 NOMAL Cho Seyeon Lee Bokki Chai Minyuk Kwon Hyungpyo single house Gyeonggi-do Seongnam-si Nomalance WISE ARCHITECTURE
LIST
bookmark_border
favorite_border
1