The Weaving of and Expression in Western-style Wooden Structures: Forest Edge 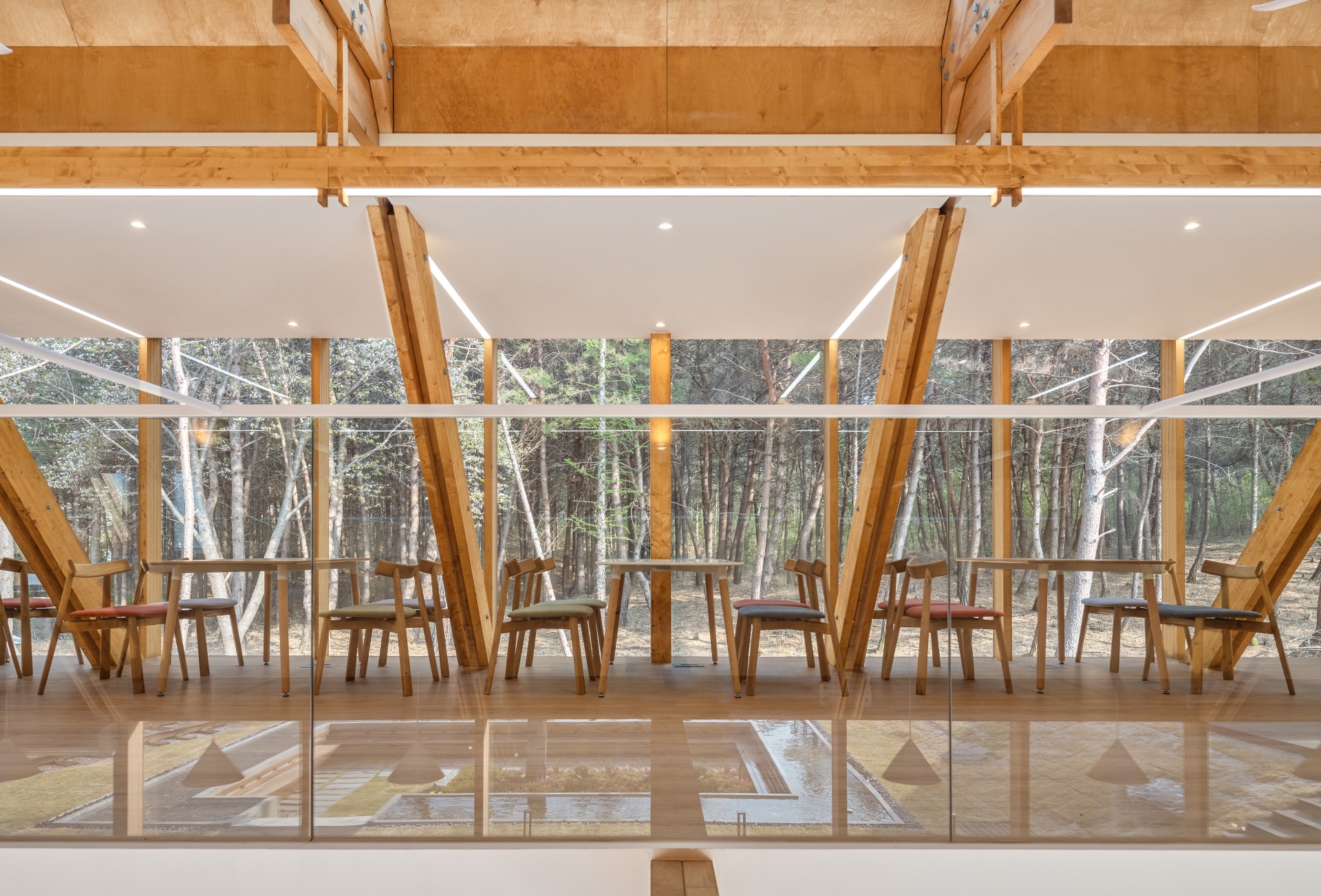 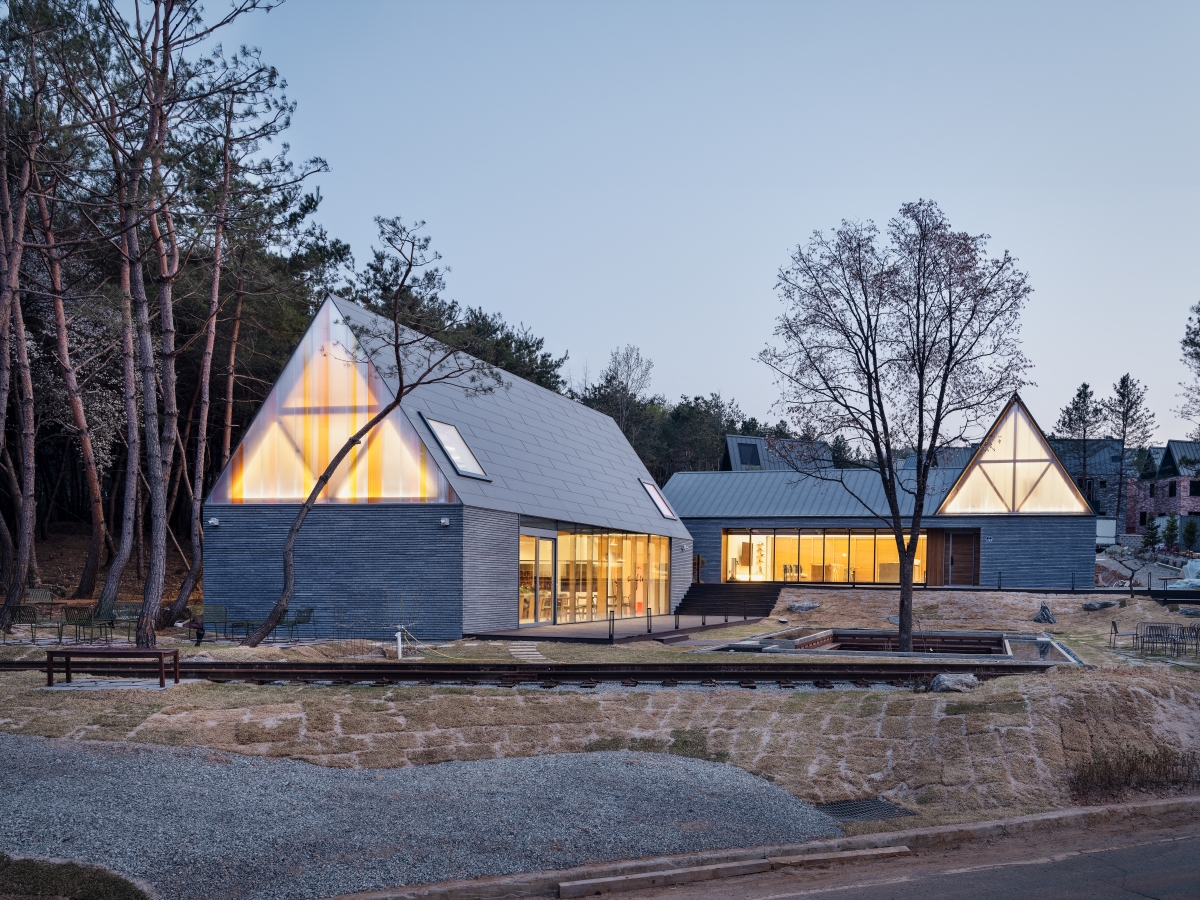 Connecting with the Pine Tree Forest

Forest Edge is made up of two buildings, neighbourhood living facility such as a café and houses. The site is located on the south side of Hongcheon-gun, about a half-hour drive from the Gangchon IC. On one side of the road is a large field, and on the other is the Hongcheongang River and a low mountain known as the Geumhaksan Mountain, which are both curved in a U shape. Each structure contained within the programme was planned in the form of a sloping roof to comfortably receive this Geumhaksan Mountain view in the distance. The central space of each building was designed to connect two opposing sides in a transparent way, with the forest around the site through a curtain wall. It creates a natural visual connection within the site and visually integrates two other programmes, the neighbourhood living facility, and housing, in the centre of the site. The cherry blossoms that were left when they flourished in mountainous areas serve as a vanishing point in the outdoor garden at the centre of the site. In the process of constructing the site and arranging the building, the height of the adjacent neighbourhood living facility in front of the site was reduced by about 750mm compared to the original. Thus, the same height as the forest was left in the form of a concrete table in the centre of the space. The concrete of the table was mixed on site by mixing the soil on site, and the central flower bed was filled with soil from the existing forest. The rough concrete block, which has become a small forested area, forges a relationship between architecture and the land, and offers a more tactile experience of the forest within the project. In this way, the land of the pine forest in the east was extended towards the centre of the site through the transparent curtain walls, cherry blossoms and concrete tables.

Geometry is a familiar word in architecture. Often used with the term form, it has the etymological roots of ‘geo’ combined with ‘metria’, implying the nuance of precision. In contrast to the wild but somewhat poorly organised surrounding nature, Forest Edgeʼs volume tried to be geometrically simple and precise. In order to realise the accuracy in mind for this work of architecture, the framework was built with precut members from the factory. The roof surface of the neighbourhood living facility building is supported by eight A-trusses precisely assembled in prefab, and the length of one side of the truss, which forms a geometric isosceles triangle, is completed using the wooden structure production standard of 20 feet. Again, these trusses were placed in a universal 4×8 feet plywood production standard of 8 feet (2,400mm) modules, and tables were placed between trusses to represent standardised material specifications more visually and tangibly indoors. The module also plays a complex role in minimising the fieldwork through using plywood and enabling efficient construction. The construction order, organised by its use of materials, forms a rhythmic rhyme with the opposite forest on the second floor. This creates a kind of spatial tension by visually contrasting the fundamental nature of a Western-style wood structure composed of mass-produced wood with natural trees.

The same materials are gathered in layers to play a structural role, which is one of the more intuitive approaches that can be used in wooden structures. In particular, a Western-style wooden structure composed of standardised members rather than the heavy wooden structures found in eastern regions such as the hanok can highlight these characteristics very well. From the beginning of the design phase, various members are piled up and the structural calculation is carried out while the use of a single member is avoided, and the combination of details between materials naturally creates a standard for internal design. So the A-truss was completed by bolting the three layers of spruce-glued laminated wood. Among the three-layer members, the members were incorporated to devise details such as combinations between furniture and lighting, and used the large beams—small beams making the two-story slab is a composite beam with double and triple LVL (laminated veneer lumber) respectively. Finally, the spruce, which is initially weak, even with its three layers, revealed more explicitly that wood was supported by metal hardware by outwardly protruding bolts when combined, and the relatively strong material, LVL, appeared stronger than the spruce. 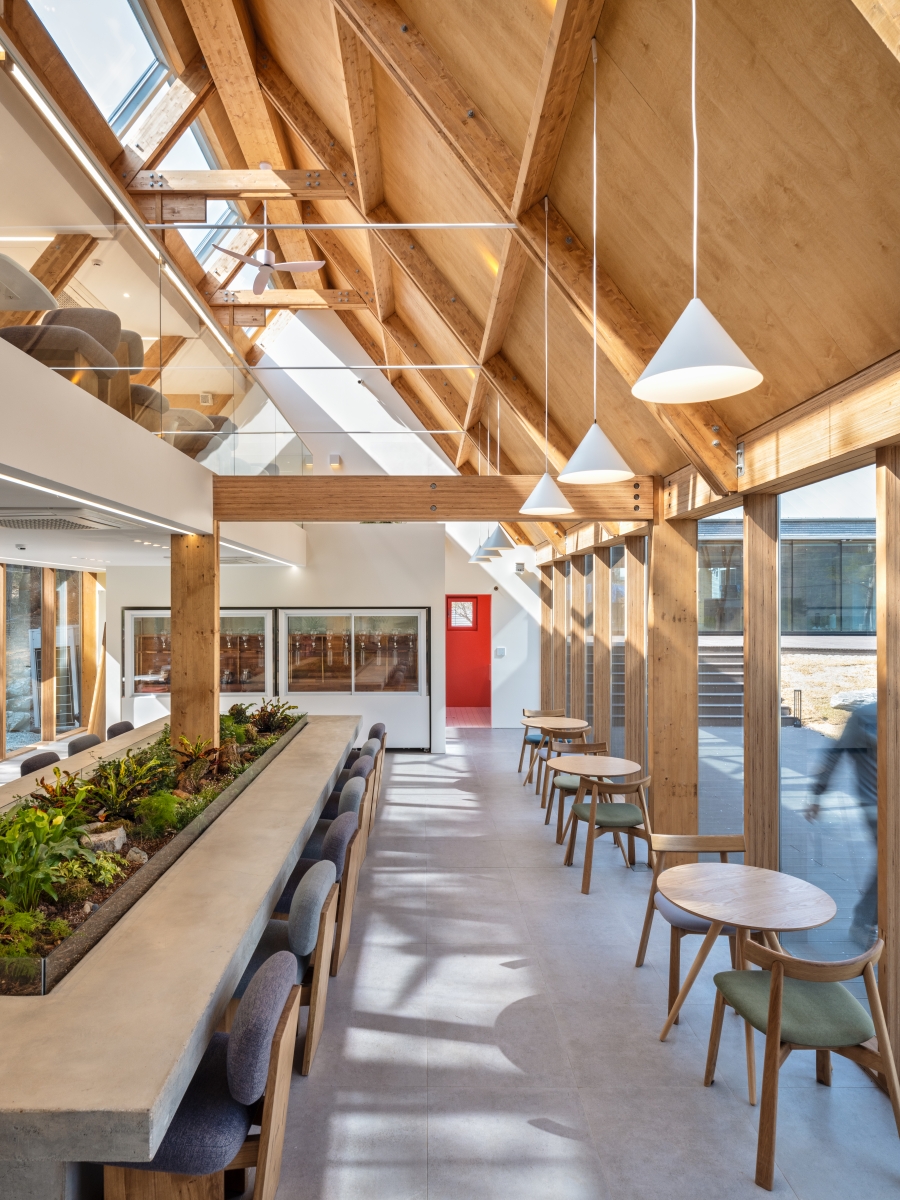 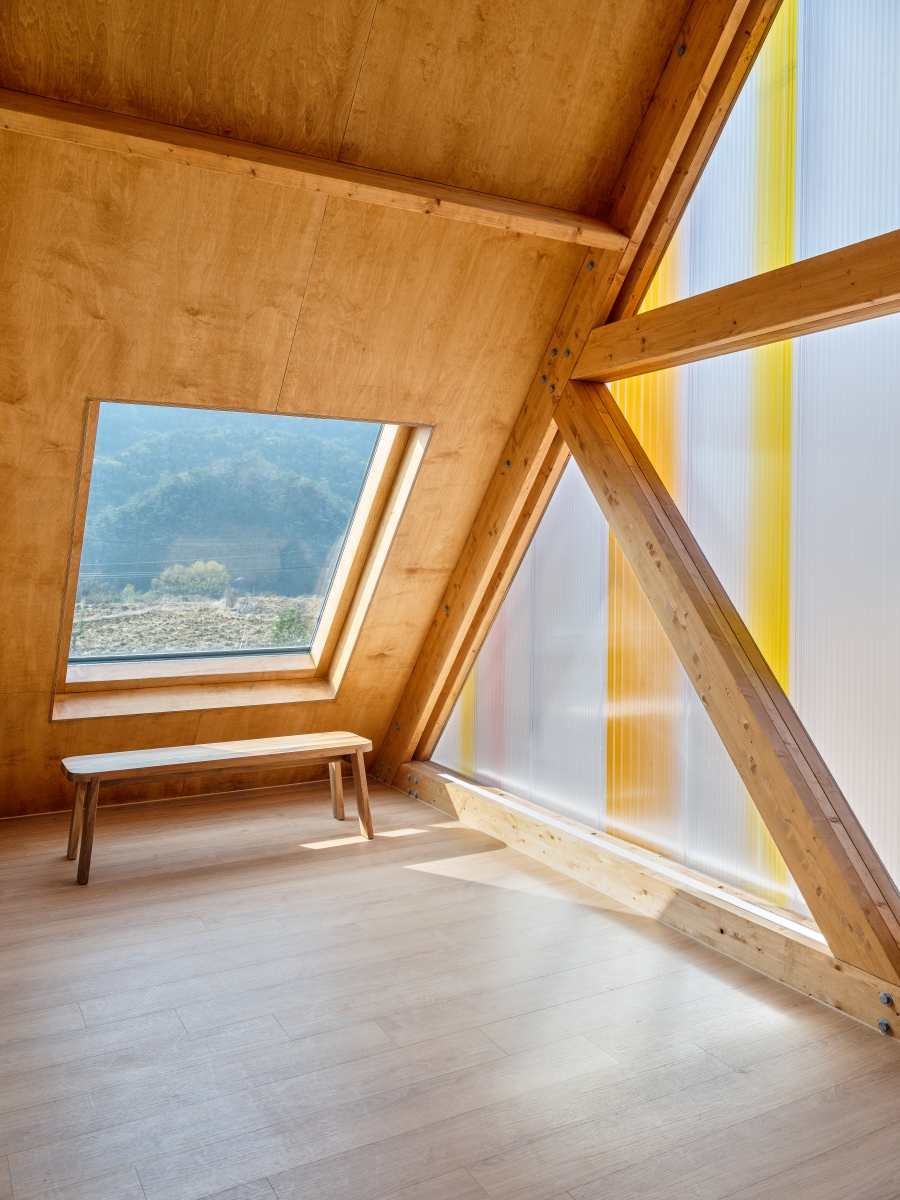 Due to the characteristics of the residential building, an old construction method called warm-roof was applied when planning the section of the roof, but the roof system secures an additional 40mm air layer on the basic wooden roof section and circulates air through soft. This is a practical construction for the durability and internal insulation effect of wood, which is sensitive to humidity. To express the hidden functional air layer as a design element that plays a dual role, a 40mm air passage was used as a structural space for forming an eaves cantilever. The slender eaves of the gabled roof of the house was built in a contrast to the triangleshaped surface of the neighbourhood living facility buildings that are without eaves, and intended to suggest that the two buildings have different programmes. Although there is not yet any rhetoric appropriate to expressing the technology used in architecture on site, I think it could be one of the ways of explaining this project.

The Height and the Light Changes

Forest Edge has a simple planar configuration. Basically, in the neighbourhood living facility building, the main space employed by the user and the supporting space are divided according to the structure module, and as a consequence, the material is divided between opaque and transparent surfaces. The residential building built for shortterm accommodation is divided into two different accommodation areas through a transparent living room ‒ dining room ‒ kitchen (LDK) space in the centre. The master area, facing the forest on the east side, features a continuous ceiling to the dress room-bedroom-bathroom where the height is constantly changing, but the last bathroom is finished with natural light pouring in from the ceiling at 4m height and experiences the height with the brightness of the space. In the accommodation area to the west, an indoor garden rich in natural light through a 7m ceiling is placed as a transitional space. This two-story area has a semi-exterior nature, and the form of the gable roof is revealed in the space.

I feel an impatience at my ability present it well and better than what I have done here which is to place blame on certain elements, but I also see now that I have been so immersed in this project. I hope all the things that I have observed and that arose for me as concerns, and which have resulted in these intuitive ideas, will remain on this desk, however small or seemingly insignificant they might be. 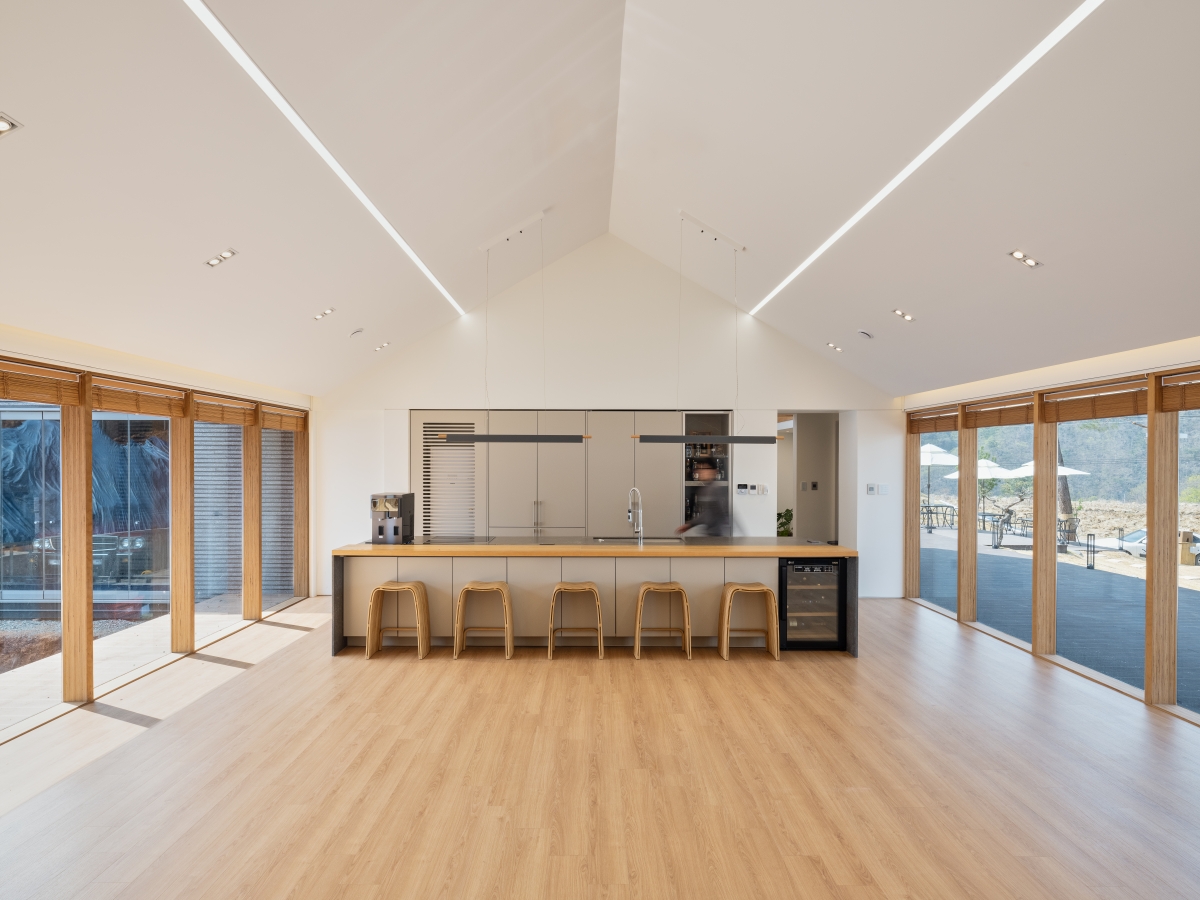 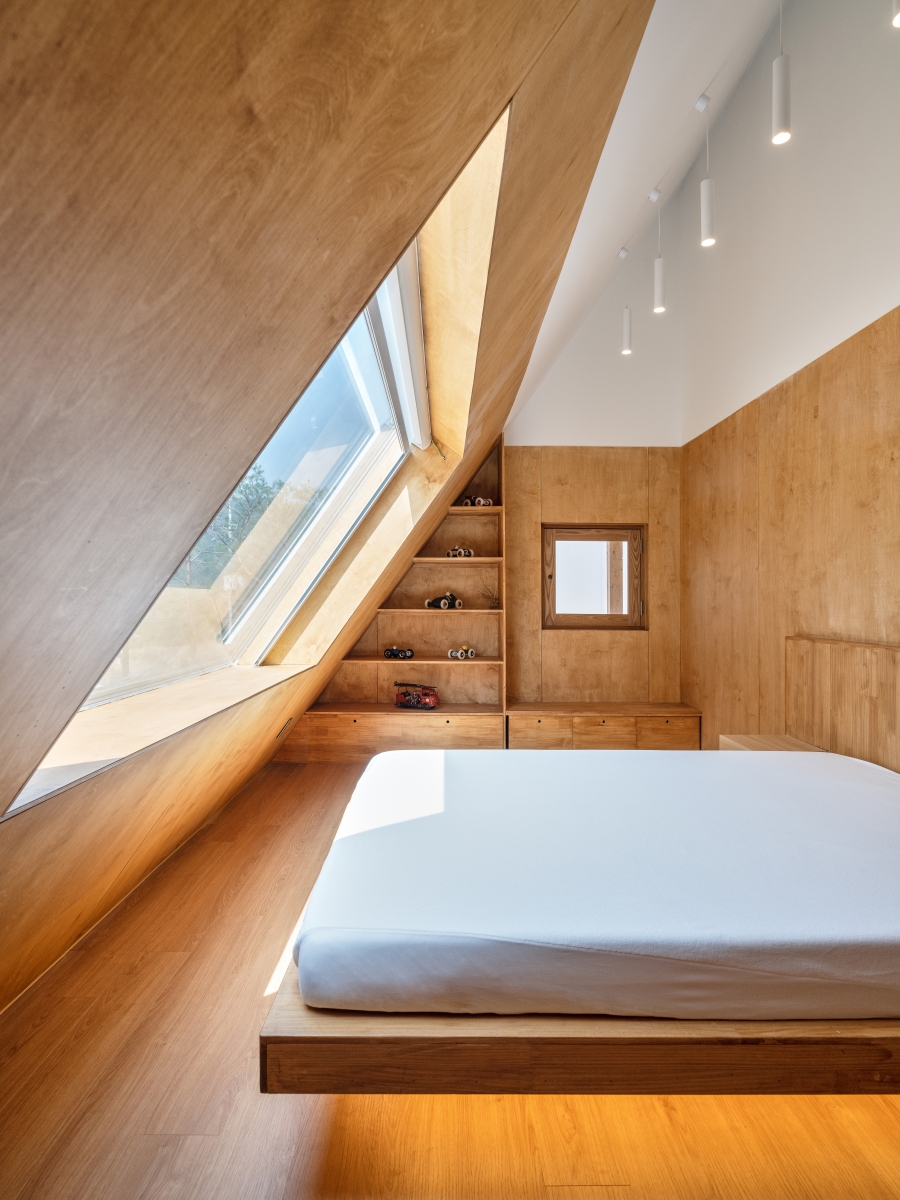 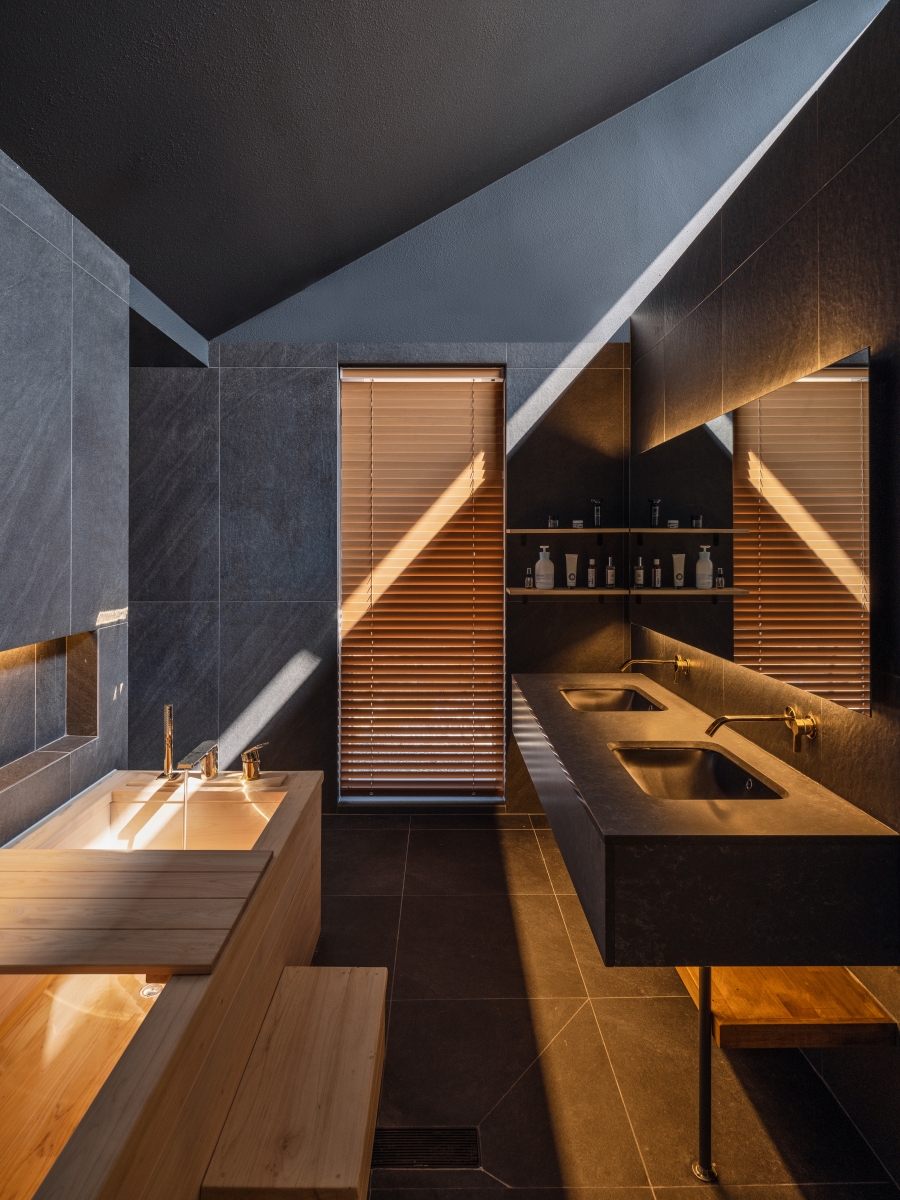 Kim Sunhyung
Kim Sunhyung is a principal at Joongwon Architects and works as a public architect in Seoul. He is registered architect in Korea as well as in Illinois. After graduating from Konkuk Universityʼs College of Architecture, he studied at the University of Michigan Graduate School of Architecture and received the Graduate Student Honor Award. After graduating, he gained practical experience at SOM in Chicago, etc. In 2020, he received Architizer’s A+Awards for the Tahoe Cabin designed in California. He is currently an adjunct professor at the Graduate School of Architecture, Konkuk University.
LIST
bookmark_border
favorite_border
1