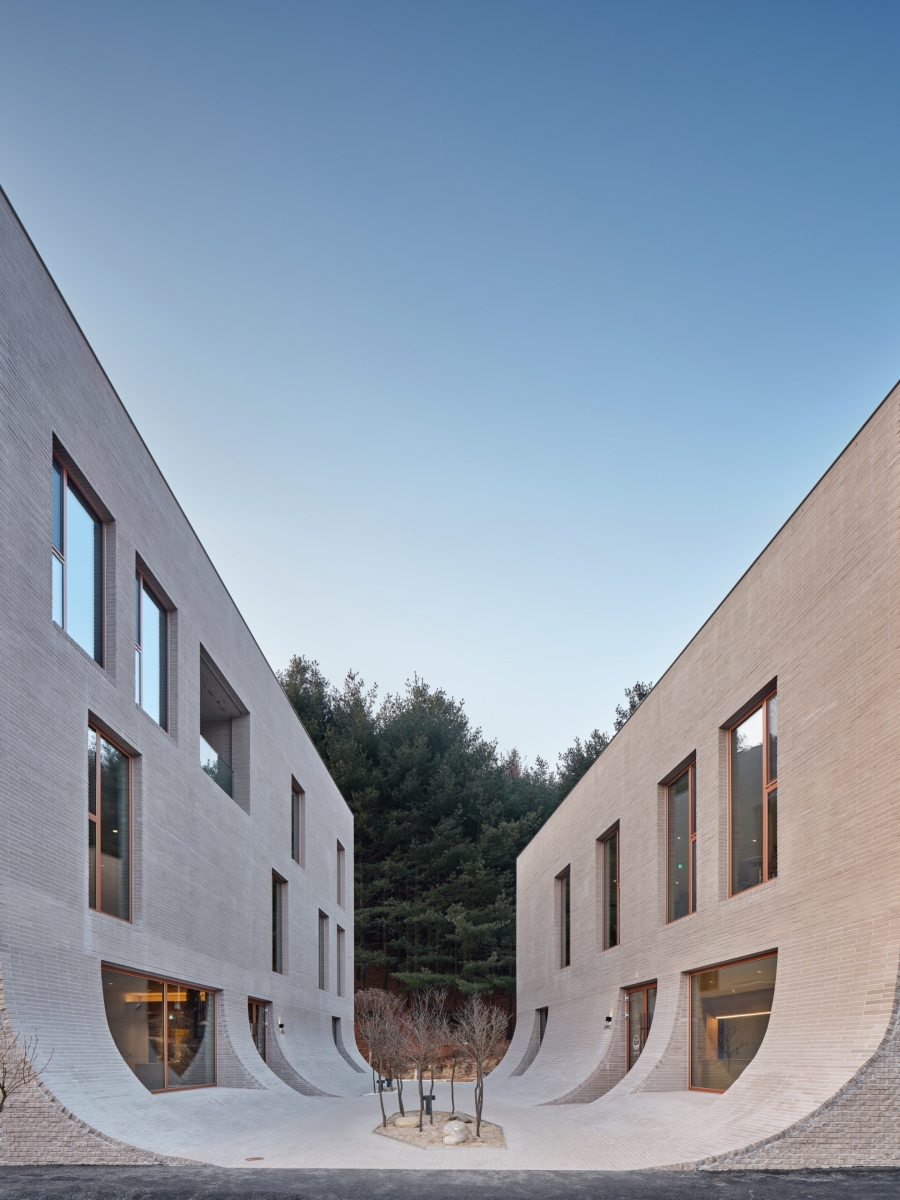 Alongside home and workplace as first place, second place and thrid place in which we can come together in all our diversity and enjoy time together. (Ray Oldenburg, The Great Good Place) This third place, where public life occurs through recreation and exchange, is now no longer a luxury but a necessity. In addition to the small neighbourhood cafés and major café franchises that have now become commonplace, a new kind of café architectural type built on relatively less-constrained sites outside the city is a more recent phenomenon. This architecture, motivated by people’s needs, is now beginning to focus on the power of space itself and the value of experience. 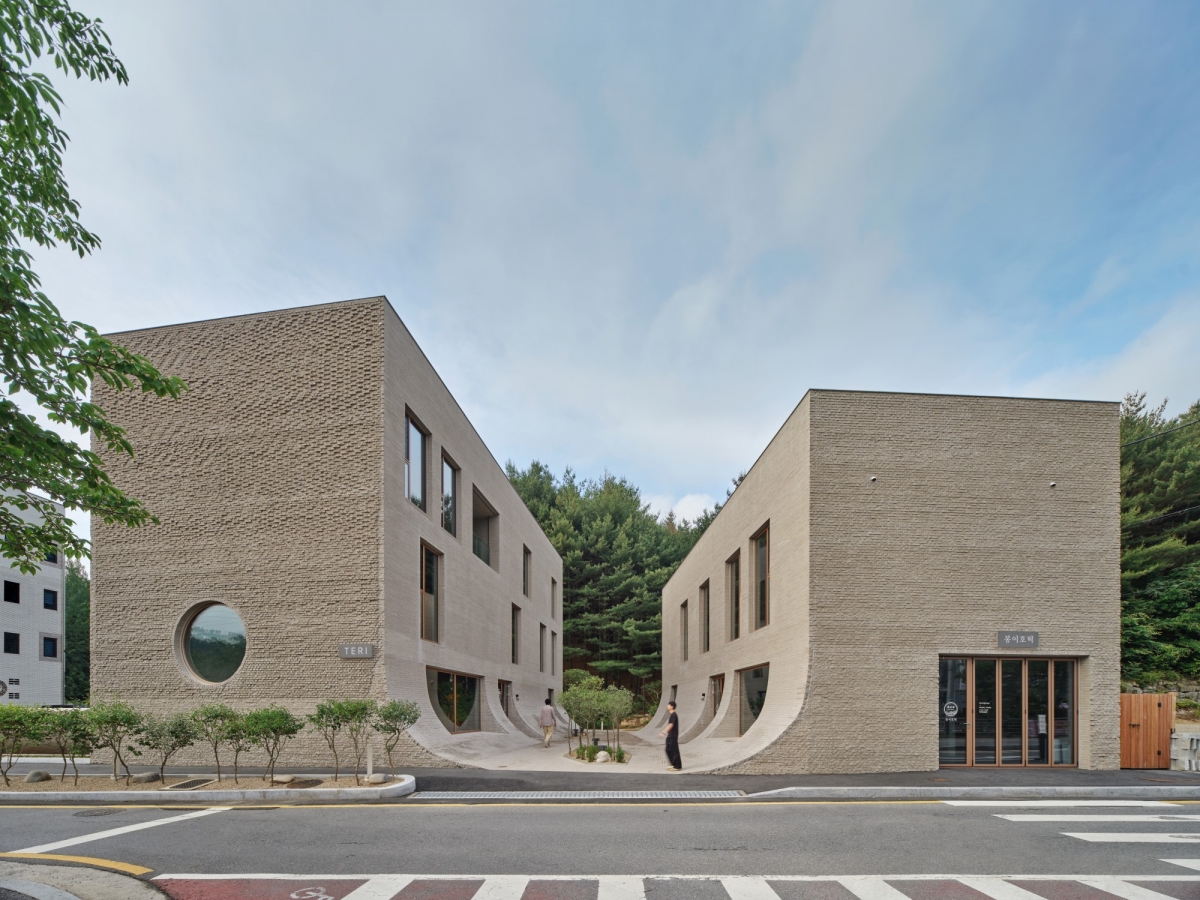 The café possesses a loosely-defined aim. Unlike art museums, libraries, or concert halls, people who visit cafés located outside the city do not have a clearcut purpose behind their visit. Composed of encounters between various people who travel just to drink coffee, to experience space, to chat, or to simply experience something new, the reasons for frequenting a café space are indeterminate. With eating and drinking as its medium, what people really experience is space via mutual interaction. This also applies to the nature of the architecture itself, which often lies beyond user perception. The looseness of architectural composition based on such a simple or open programme permits vacated margins. The possibility of enjoyment arises from the aimlessness of spaces such as these as opposed to a densely-packed space with a clearly visible function. Instead of calculating its visitor capacity, what one should focus on concerning space is how it will inspire and provide visitors with a enriching experience. 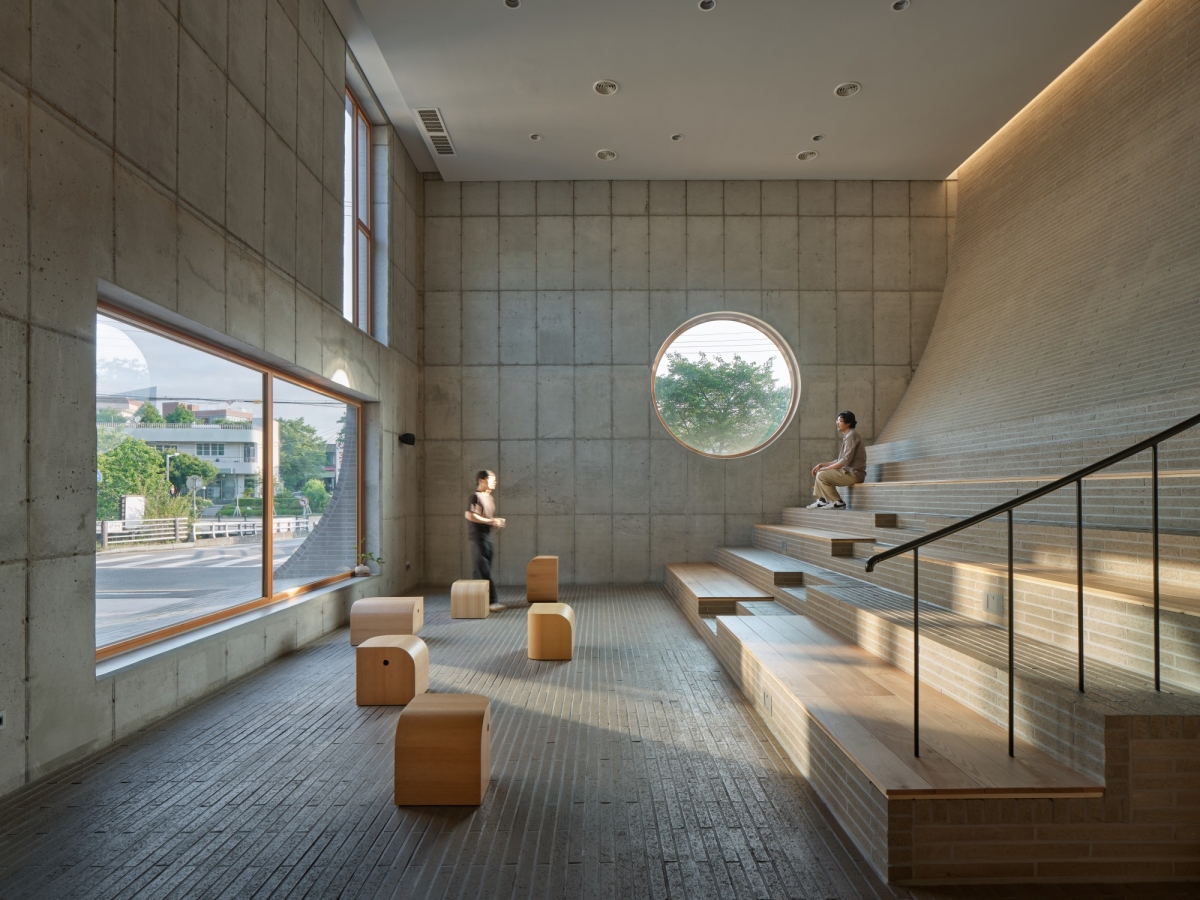 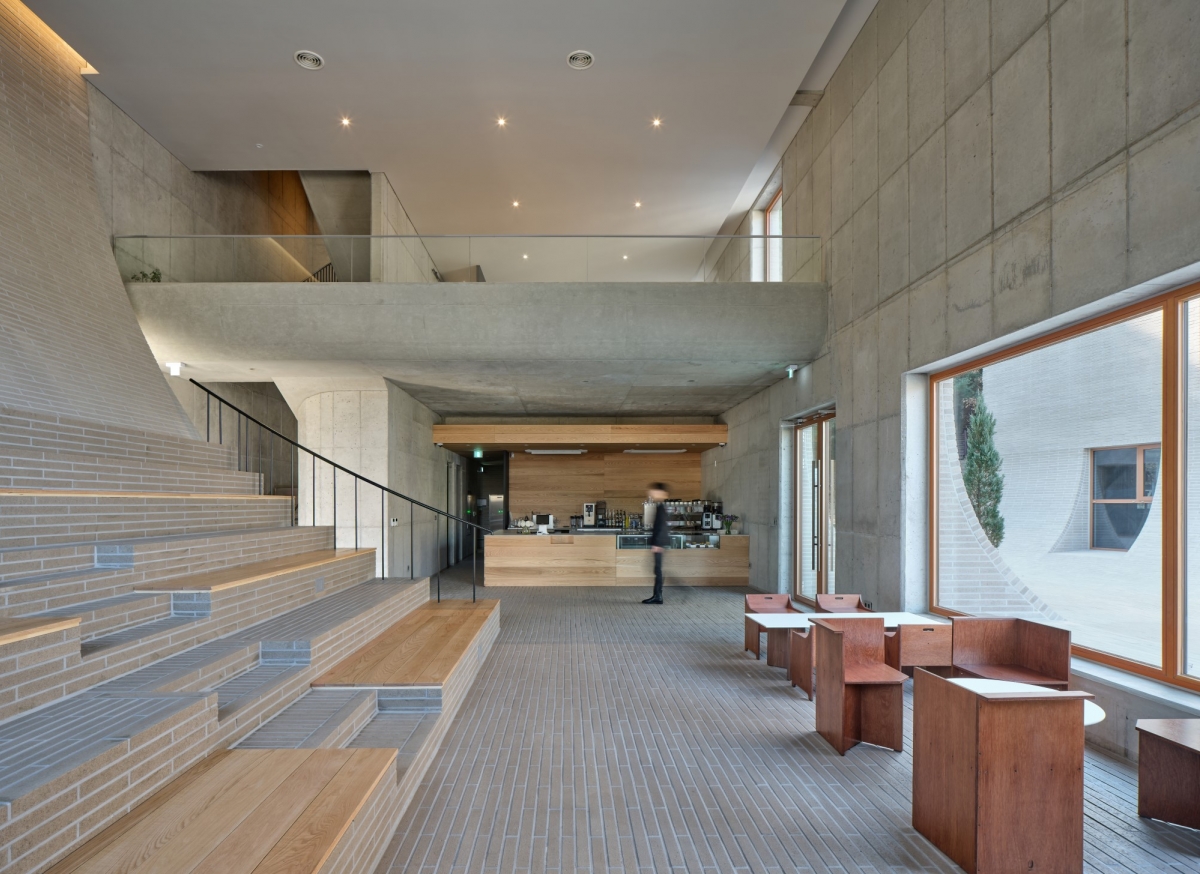 The social meaning inherent to the spatiality of café architecture, however, is somewhat paradoxical. The café is unofficially a public realm. The paradoxically public nature of a café, one that is also a commercial space for consumption, emerges from the fact that it is not exclusive to certain individuals but open to all. As a third place where people may rest outside of home and work, anyone may gather and exchange without formalities, but as a place where everyone is respected as an individual, this public space also provides the comfort of a home. This ambiguity prompts to the diversity of café architecture. Recently constructed large-scale cafés display their peculiarities and place emphasis on the spatial narrative. This architectural type, where it is relatively easier to promote architectural identity when compared to other facilities, can be ordinary and yet unique. This makes visitors who enjoy the space want to record it on their phones and spread images and their impressions of it to others. Some may find this archiving of space by the general public disturbing as a form of spatial consumption. This may come from a concern regarding spatial sustainability and the trivialisation of architecture reduced to mere visuals. However, I wonder if there was ever an architectural platform like this in the past where people could freely occupy its zone of operation and share information. What we want to focus on here is not the architectural template that is biased towards a certain class of people but the architectural experience itself that can be freely embodied by anyone.

Our design for this cafeteria lies within this context. To emphasise the notion of a high-traffic space, owner decided to rename this publicly all-accessible café place as ‘0.GAN TERI’—it means Space TERI. 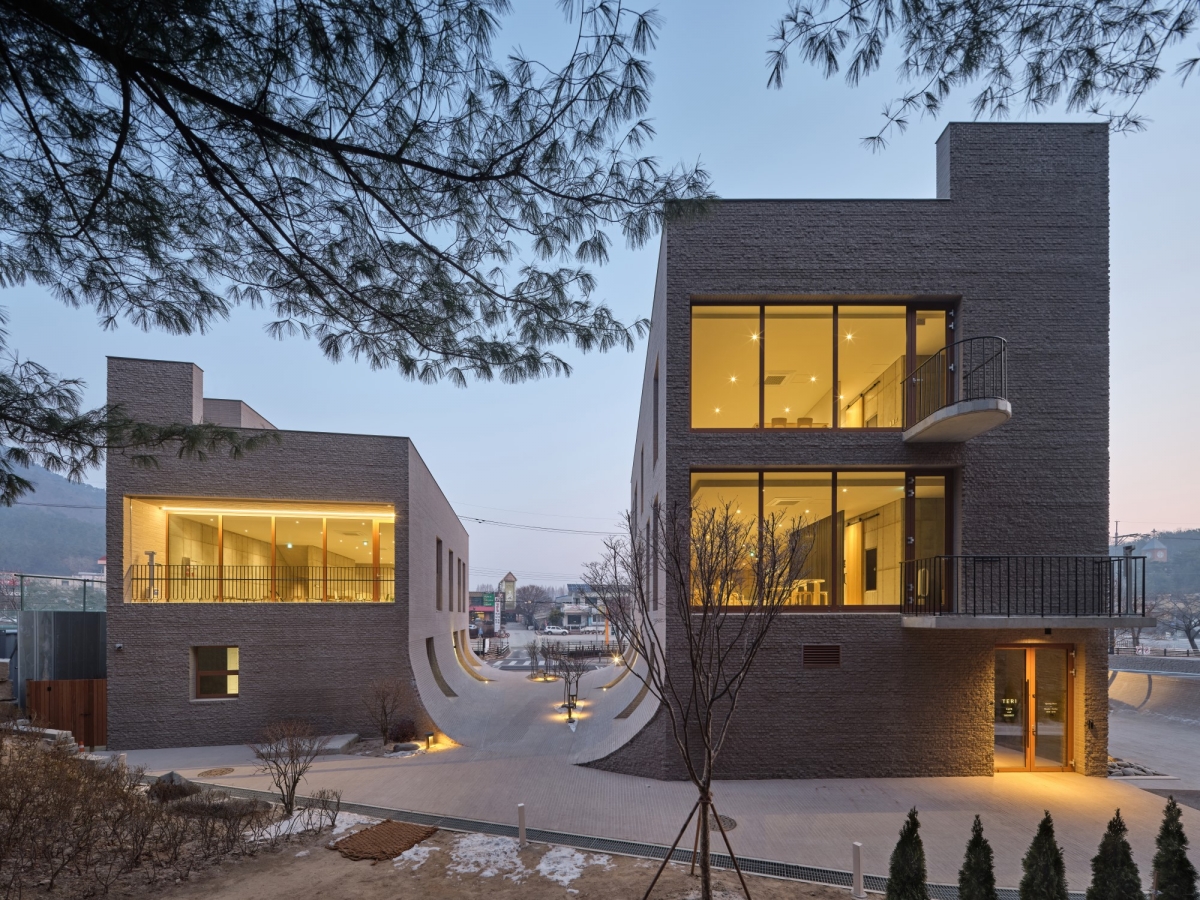 The site of 0.GAN TERI is located at the mountain base of Gyeryongsan Mountain in Yuseong-gu, Daejeon-si. The unique locational feature of this site, located on the border between mountains and villages, is that there is a public mountain trail connected to it. The mountain trail entrance, which was formed next to a privately-owned segment of land and which was empty for a long time, has been consolidated by countless users. Instead of blocking off this trail, we wanted architectural structures to form a road that would draw people towards the site. With the trail in the middle, two buildings are positioned to face one another to give up a gap in between. The building wall then flows onto the yard. The artificial valley created by this blurred boundary between wall and floor creates a flow that leads toward the forest and acts as a café yard and a mountain trail. The flowing wall continues not only on the exterior but also in the interior spaces to form a staircase-like space for staying and thereby connects the interior and exterior landscapes. The loosely-raised hill at the backyard is a quiet location for a moment’s peaceful rest. The concrete bricks used to create this architectural topography brings about a sense of flowing spatial continuity. In contrast, the rough and broken bricks on the façade capture the light and shadow that transform as the day passes. The three-dimensional trail, yard, and hill created by the building interior and exterior hold the possibility of a third place that embodies rest and leisure. This possibility is open to everyone who visits here. 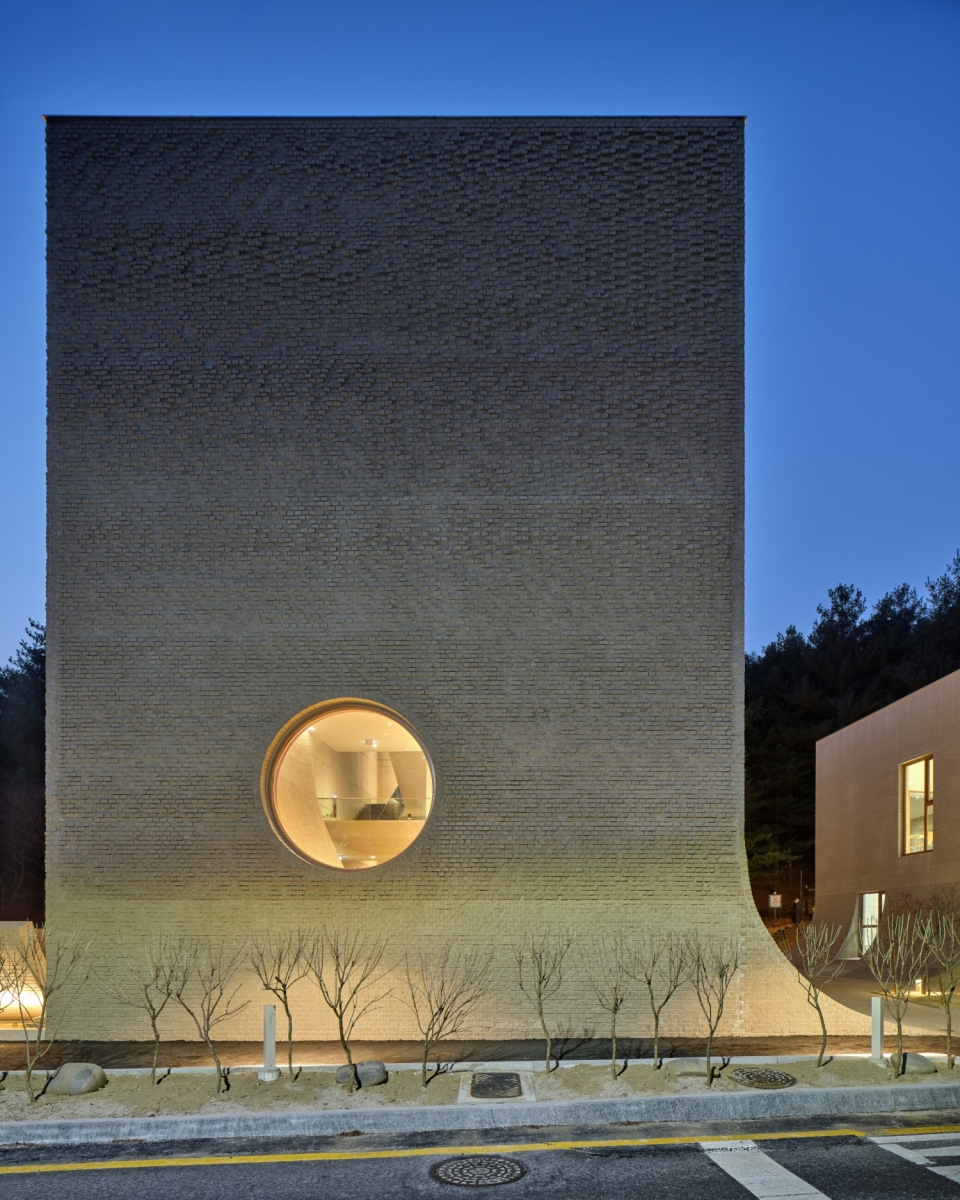