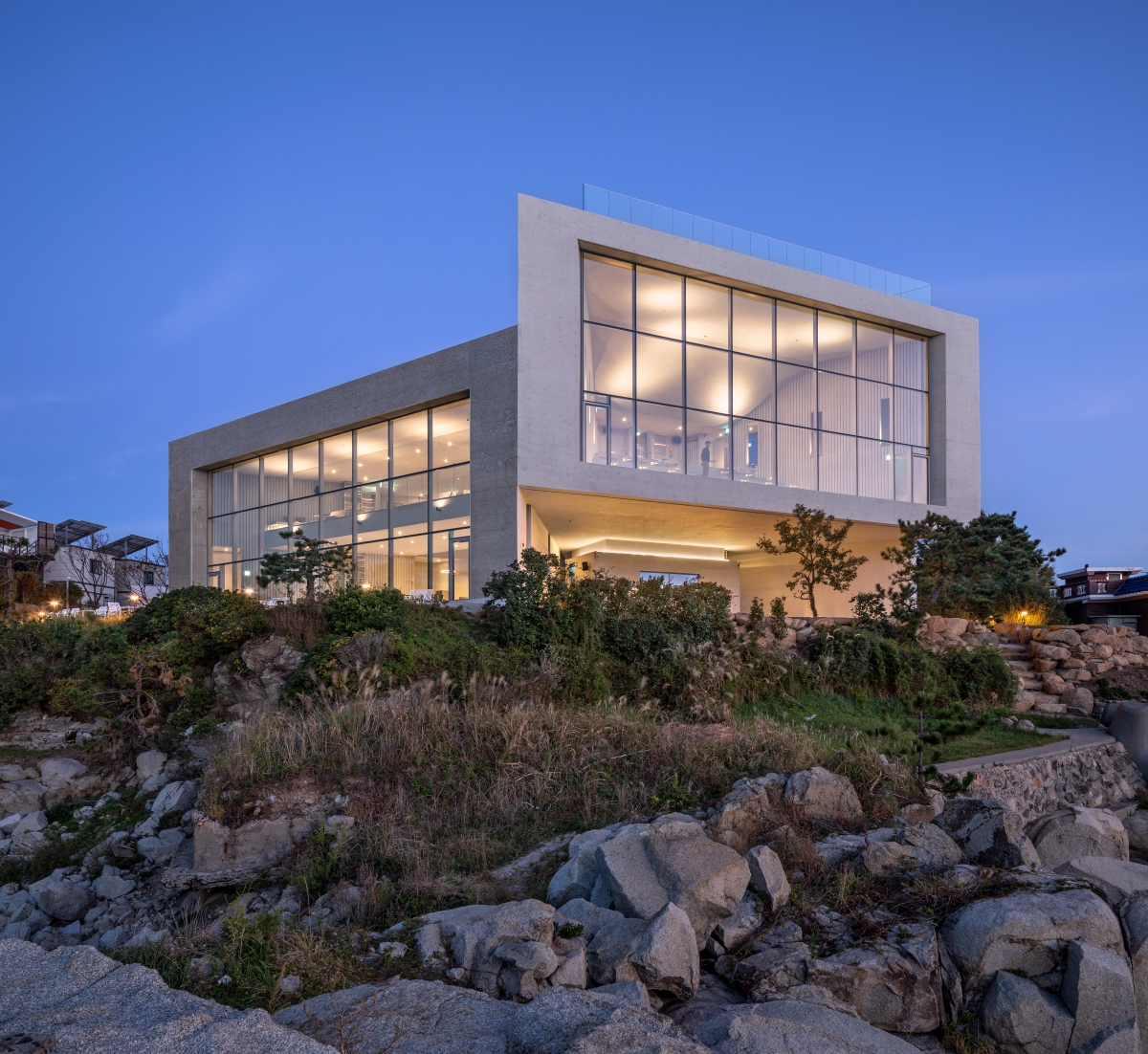 In recent years, café architecture, an area very much in the hands of architects, is beginning to hold a unique place in the field. Although they are a commercial spaces, evidently seeking profit, the nature of users’ actions taking place inside and outside these buildings is quite public and open. Cafés can serve as libraries, as spaces to meet friends or colleagues, as concert halls, as spaces to recharge or to seek inspiration, and even as children’s playgrounds. Furthermore, whether they are located in the middle of the city or on the outskirts, each of these spaces tend to be influenced by their surroundings and endeavour to capture their local colour. As a result, we are easily able to locate not only examples of an experimental appearance in terms of their architectural features but also notable aspects in the field of construction, such as use of materials, structure, and space. As if responding to these achievements, people passing by in a hurry could not stop pressing the camera button on their mobile phones to capture their own images. This is becoming typical of a café. 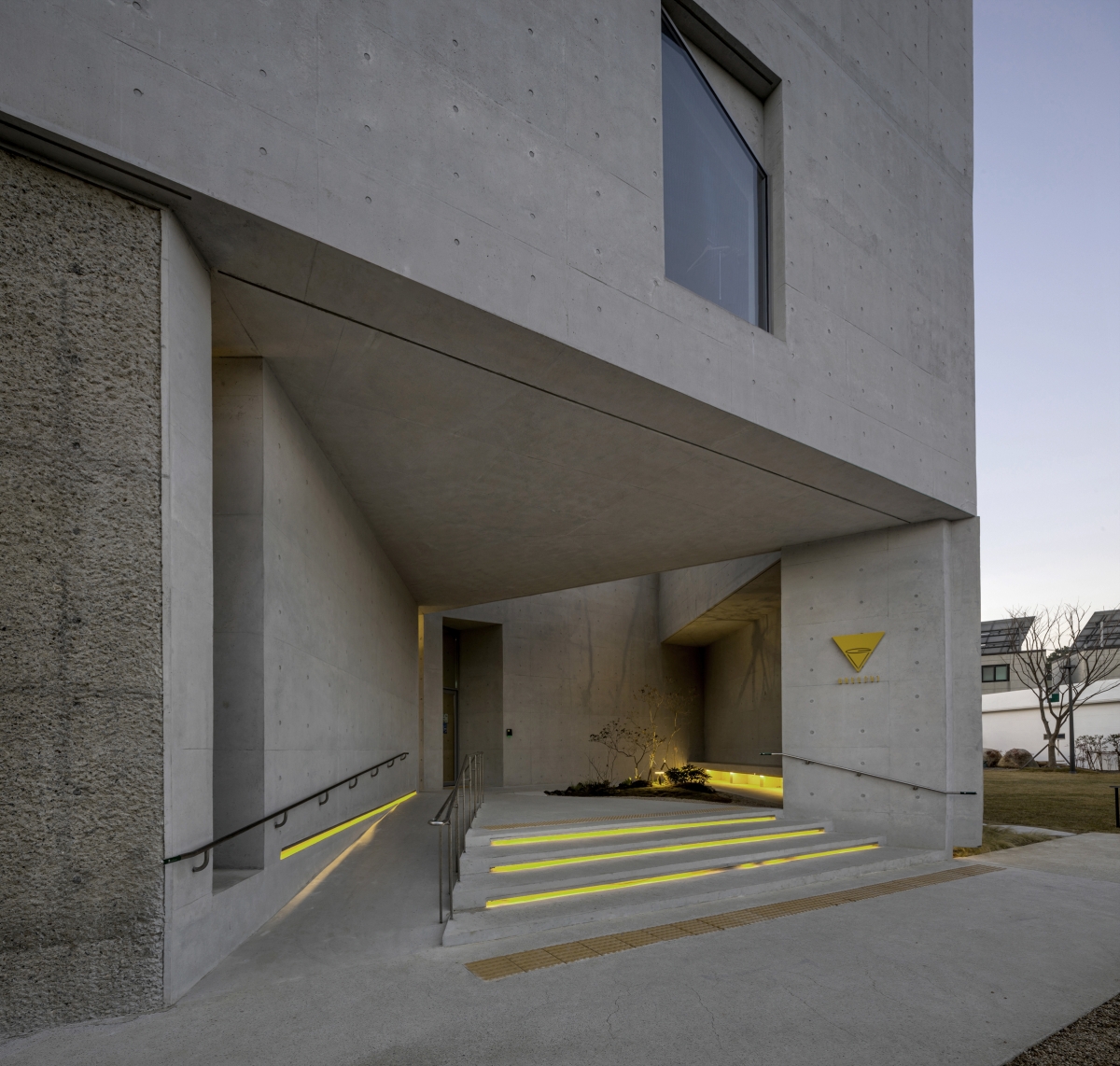 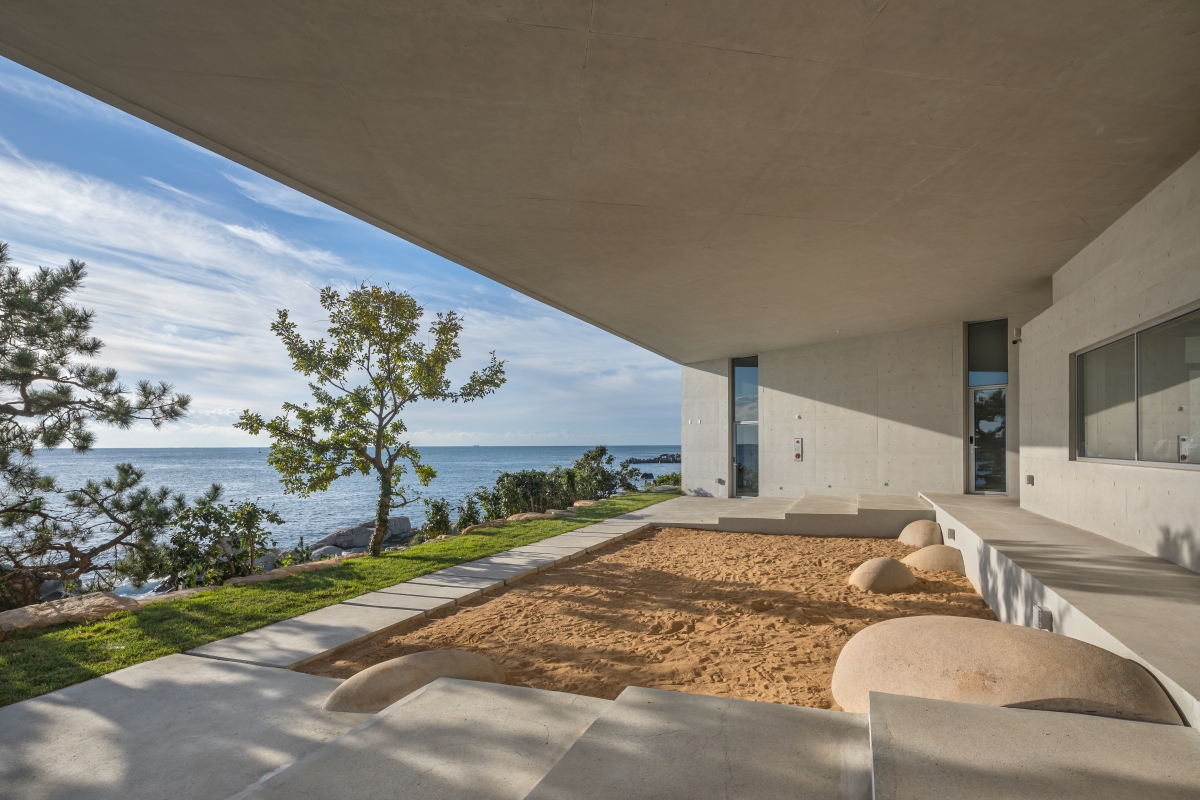 Two Triangles faces a seaside in Ulju, which is located in nearby the Kori Nuclear Power Site. When you ascend the slope along the street, you come to a café that overhangs the sea. The wind was strong on the day we visited the site, and the sound of waves and smell of the sea came in sensuous waves before the striking image the sea extending away outside. As one approaches the building, it deliberately diminishes in one’s sight – starting by only showing a small portion of the sea through the gaps in the triangle – and opens up experiencing the site through the other senses. After passing through a place filled with the expanse of the sky and light by emptying the corners of the triangles, we enter the main entrance to see the sea from a southerly direction through a two-story-high window. There is a large triangular table here, and customers stay for a while after ordering. When we made our way to the second floor, along the circulation path in which the view is blocked, we found a staircase that again went up to the roof and a café space that faces the void on the first floor. Depending on the preferences of visitors, one can either go up to the roof or enjoy looking out over this narrower view of the sea at the south while having a conversation with each other, face to face. After passing through this place, we enter another triangle called the ‘ocean theater’. As the name suggests, this is a place where you can sit on the stairsteps and quietly gaze out at the sea in front of you. The experience of going back and forth between the two triangles of different levels is not unnatural, and so it raises expectations for the next stage. Architect Lee Kichul described the multilayered and complex perceptions of users along with a series of processes or times in which the space, the result of construction, is instantly recognised and operated by people as ‘moments of space’. He referred to the method of determining and combining the moments of that space as a ‘play sequence’. The architect’s terminology described a series of ways to experience Two Triangles. The reason we can are able to achieve such a diverse experience, compared to the scale of the building, lies in the cleverness of the architect who quickly reacted to the fact of the boundaries of the site facing the sea. As the architect mentioned that the strategy of designing this building was made when he first visited the site, it seemed that the two triangles were derived by considering the shape of an obtuse angle along the lines of the site, unlike a typical square site. The two triangular masses on the hill, higher than the surroundings, were different in cross-sections, and the scale was adjusted by varying the texture of the parts where they meet each other. The space created by a collision of light – which flows in following the bold decision to remove the corners that were difficult to use in any functional capacity – and the diagonal lines – which may be complicated – is quite colourful. The scenery, space, and light created in this way were something apart from what I had imagined by looking at the materials prior to visiting the building. In contrast to the notion that the intended scenery would open up if you follow the neatly organised circulation path, the potential for choice was necessary in determining the circulation inside the building, and there was an unfamiliar feeling that the impression is continuously cross-edited according to their selection. 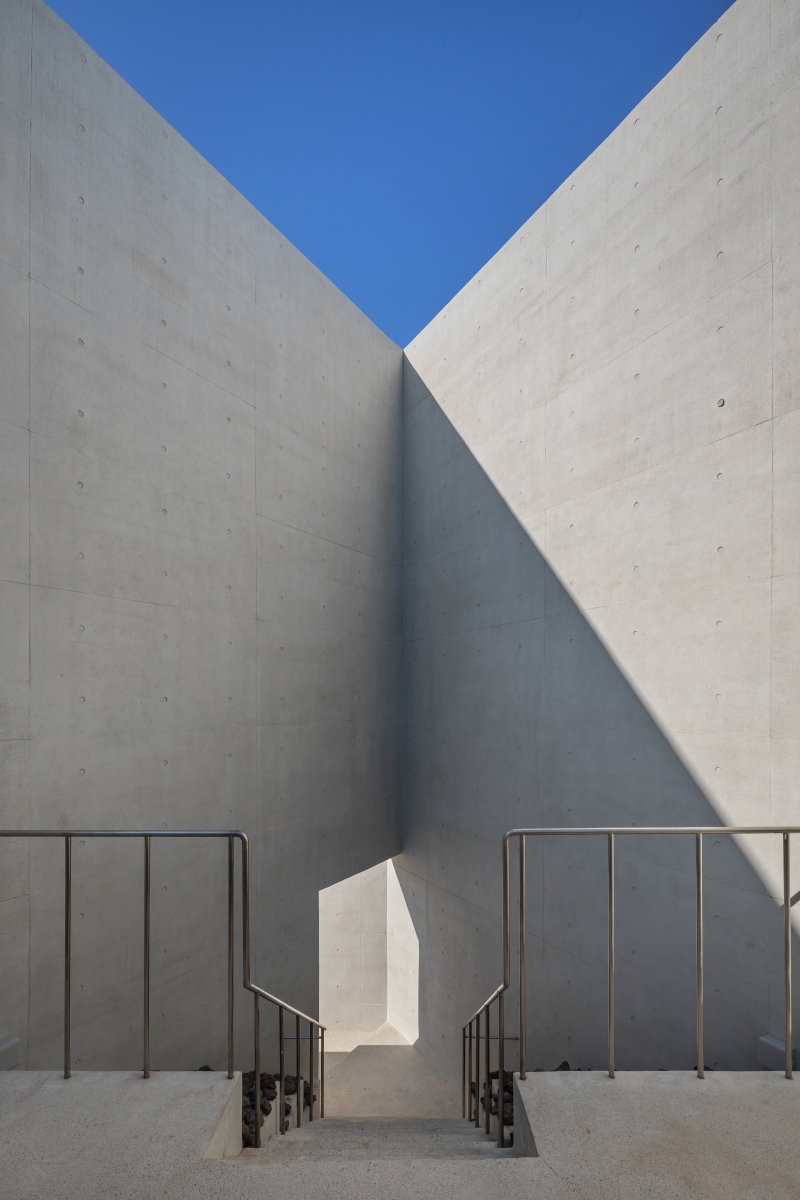 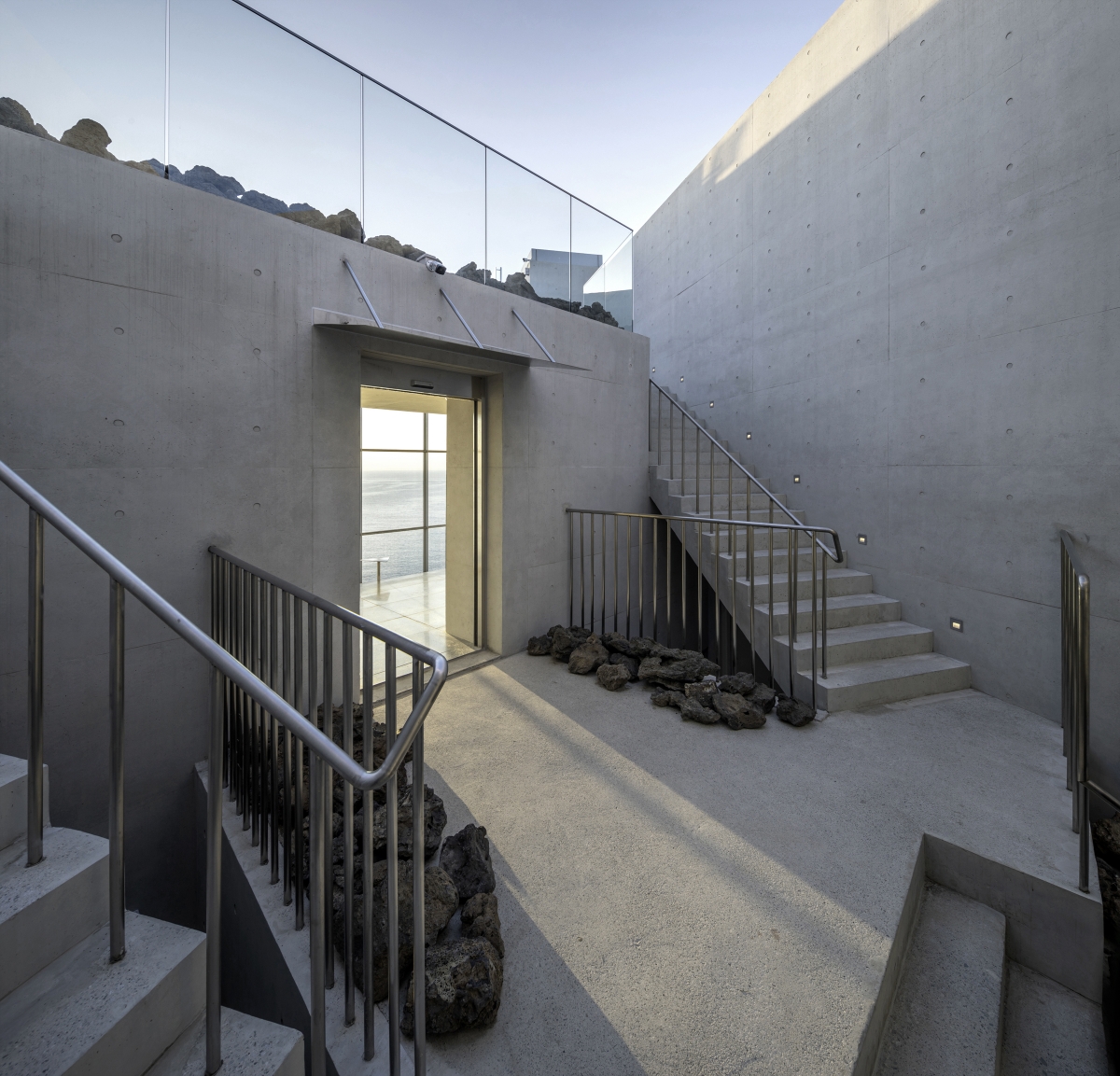 Parts of the Tectonic

All these processes exist for the sea, which is viewed through a 23.4m-wide and 9.3m-high curtain wall placed on the hypotenuse of the two triangles. The cosy-looking south sea and the vast east sea are one sea of different appearances. The following descriptions evidence the sense of meticulousness created by the architect’s clear intention for the building that the architect is determined to design: in order to enhance the immersion level, the interior and exterior materials are simplified to exposed concrete; the newlyblended and created terrazzo floor, in addition to the ceiling surfaces divided by the formwork lines as the vertices, are to give a floating colour and texture; the walls that control the reverberation of sound by rendering the concrete surface uneven with chamfer strips; 25mm-thick steel curtain walls applied to avoid blocking the view; the part connected to the transom is flattened to appear as a single member; and the post-tension method was applied to the 20m-long hypotenuse open to the sea for a dramatic appearance. 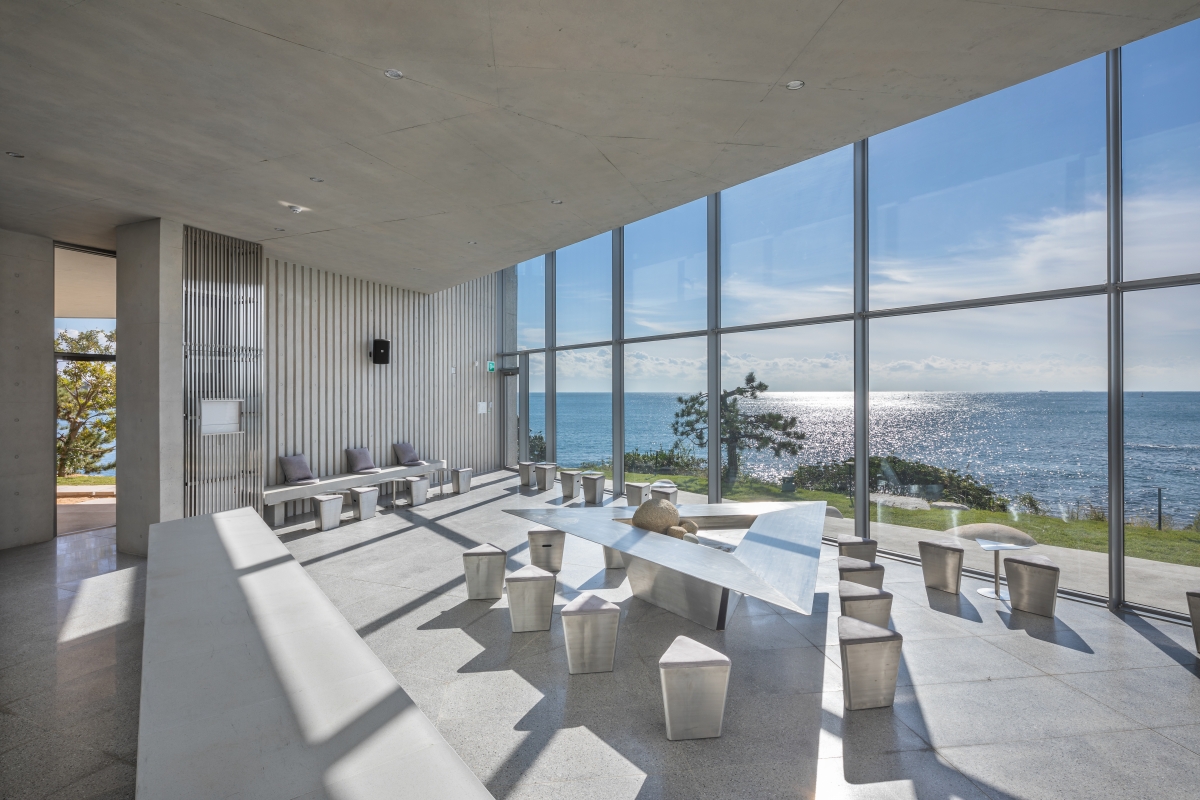 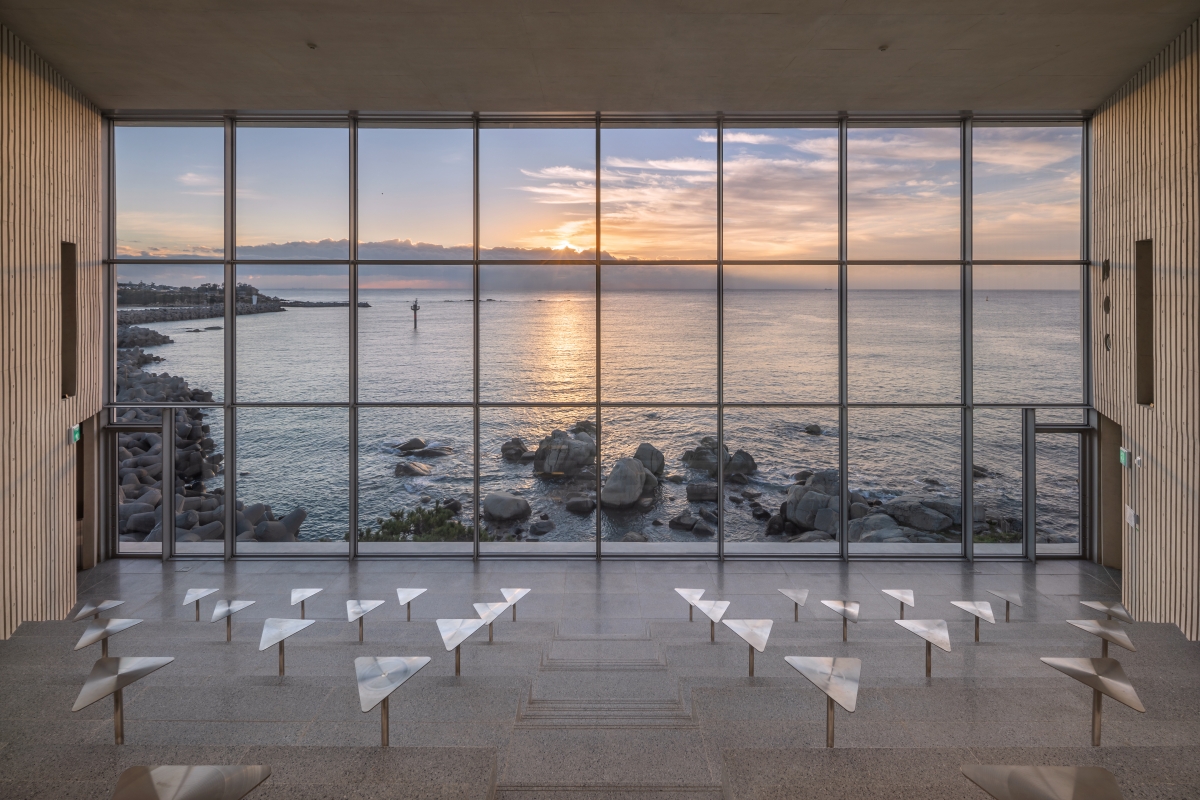 Views of the Exterior

When you look at the building from the seaside, you can clearly see the users – behind the two large glass windows – using the building in their own ways. The architect said that he likes to look at the building from this position. Perhaps it is because the contours of the building are best seen from here, but also because the diverse movements of those inside also inform one’s appreciation of the building. There is an element that reveals the ingenuity of the architectural language in this space: you can witness the simultaneous movements of the south side – which shows the horizontal movement along with the circulation path – and the east side – which reveal the thick sense of the depth of the building along with the stairsteps. It was a view that could only be experienced from the surfaces with an obtuse angle made of the two triangles. Although it seemed a little odd, there are also traces of the exterior space that the architect collaborated with the landscape architect to bring the looks of large and small natural stones along the beach into the building. While on a tour around the building, I found the architect’s kind-hearted gaze toward the building as an expression of confidence that endured the not-so-short design period and the not-so-easy construction period. Two Triangles designed by Lee Kichul has already become a landmark in Ulju. The majority of the general public using this place will be influenced by the power of this architecture, and in the future, they will be make more demands of their environment in terms of architecture. Those demands will make future architects better at their work, thereby providing the general public with more nunaced works of architecture in the years to come. 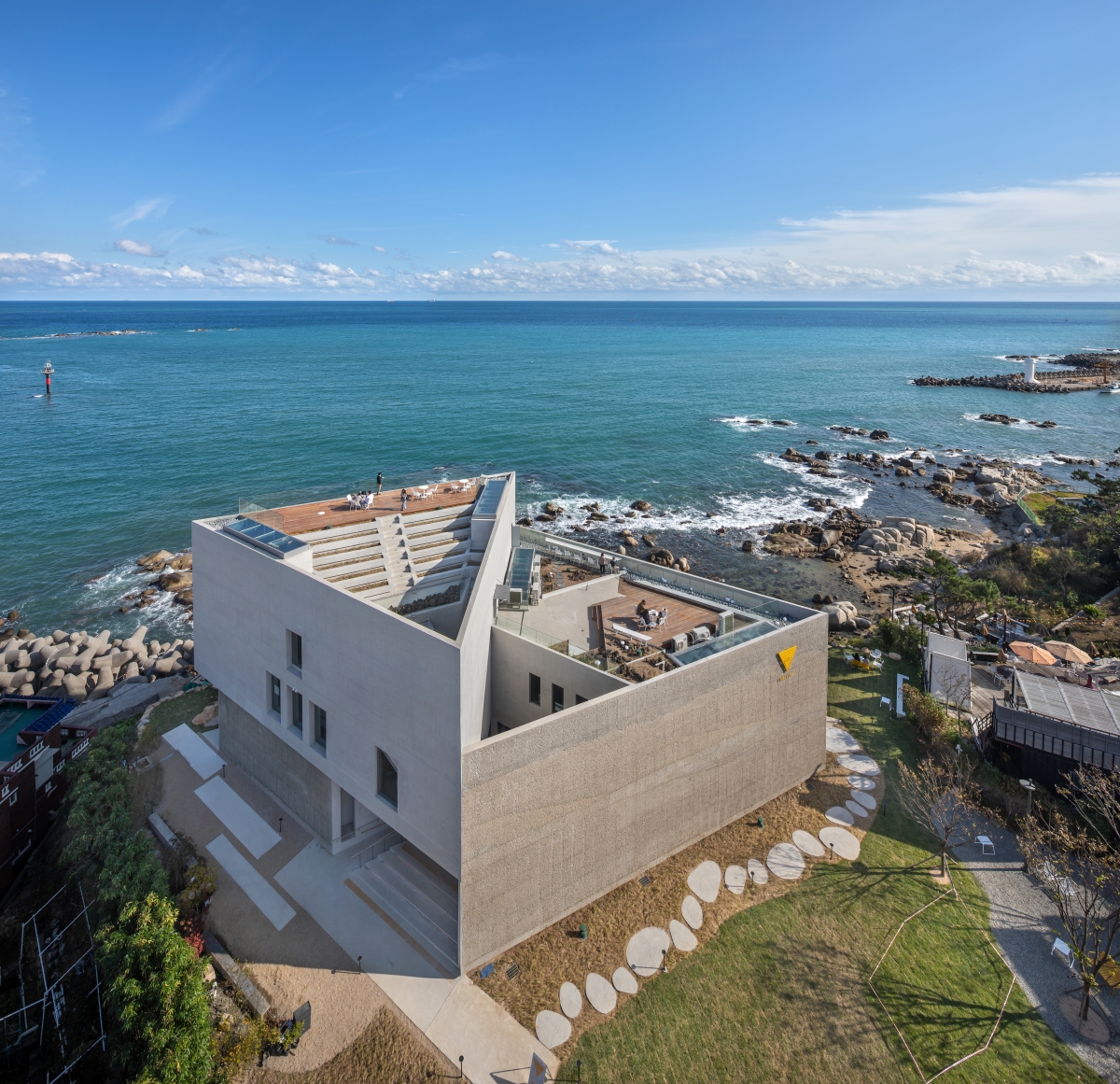