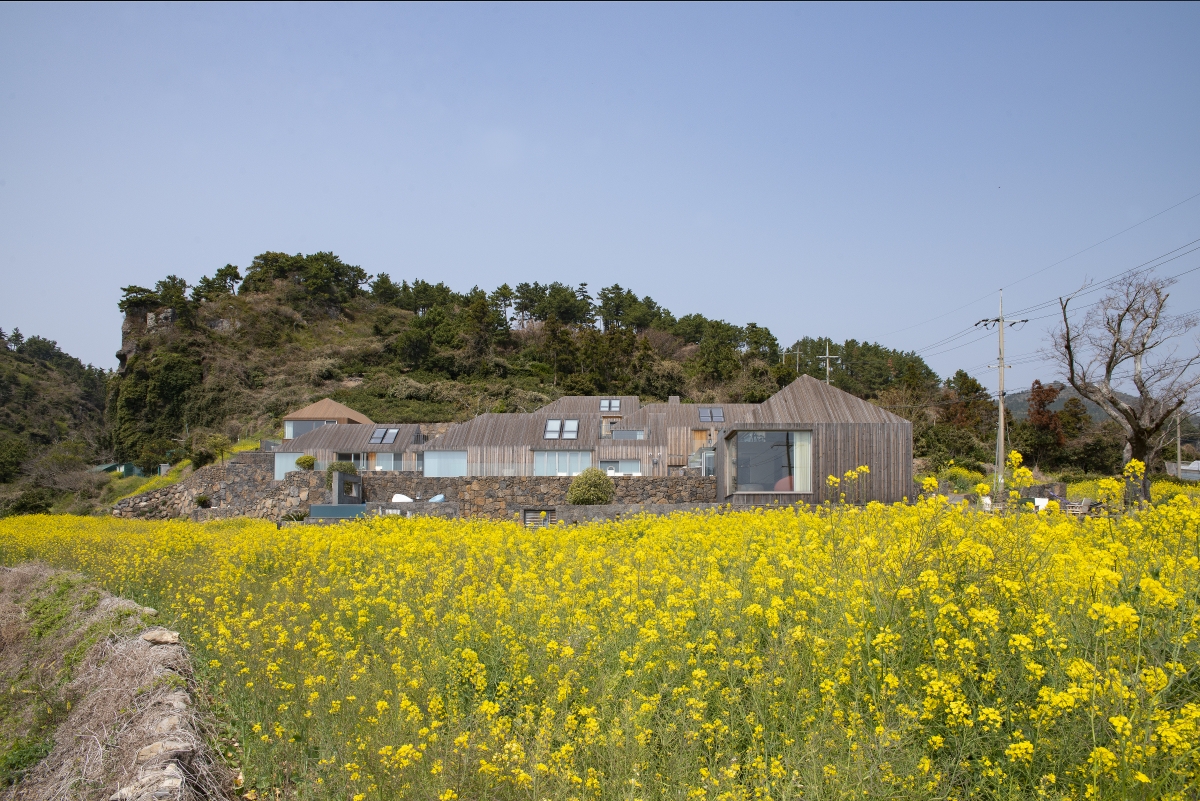 This is a project designed as six detached houses for six owners. The clients are the former and current employees of a domestic company. When they were young and worked together, they made a pledge to one another to build houses and live as neighbours following their retirement in a nice place with an ocean view. That promise, which sounds somewhat unrealistic, has finally become a reality with this project. 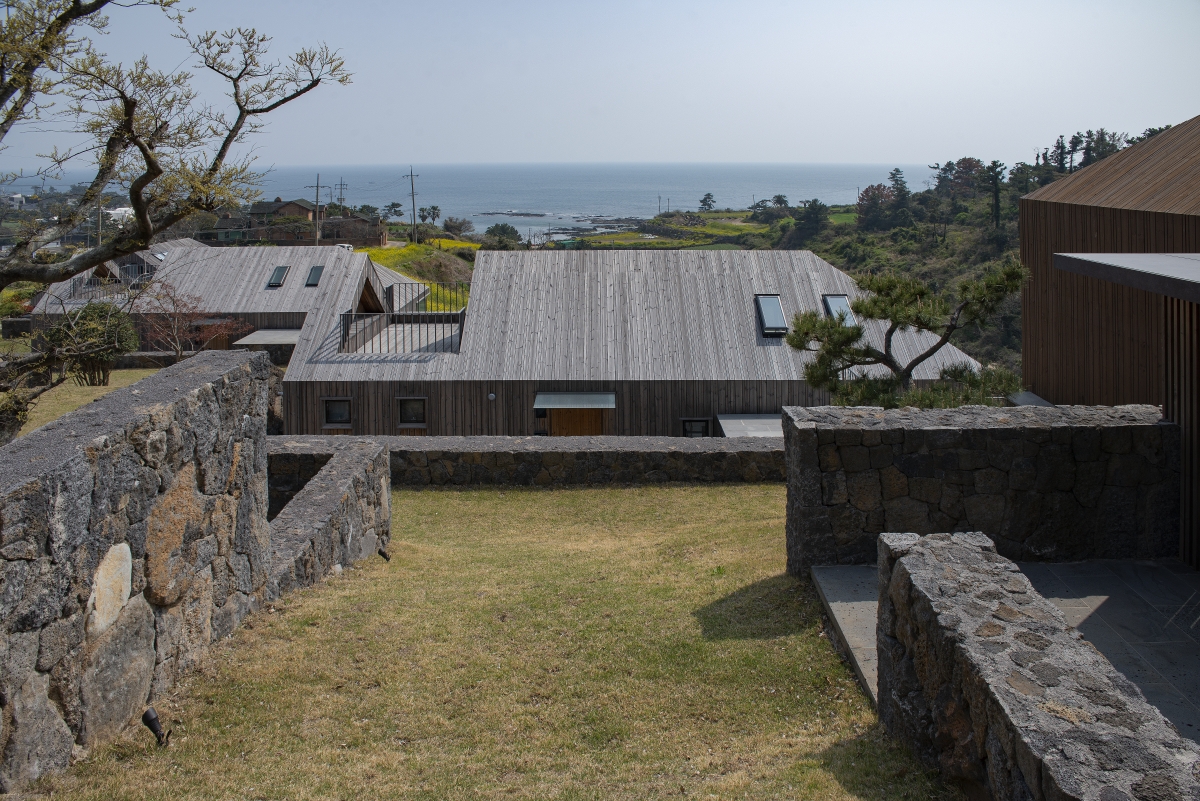 The location is a gently sloping hill in Seoguipo, Jeju, overlooking the Pacific Ocean. Here, there is a small port used by fishers on the seashore, and, to the east of the site, there is a large flatland known as ‘Nandeureu’ (or ‘Daepyeong’), where residential areas and farmland extend towards the horizon. To the west of the site there is a valley and beyond there is a famous rock cliff called ‘Baksugijeong’. To the north, the slope of the mountain range continues until it reaches Gunsan, the largest oreum (volcanic cone) on the island. As such, the northwest is closed and the southeast is open.

We decided to follow the original plan of six detached houses rather create a complex. Still, nevertheless, we agreed that it was essential to build a ‘village’ by forging organic relationships between structures. In other words, each house reflects the needs and the tastes of the clients while maintaining their unity as a village. Moreover, we agreed that various elements necessary to the village should be placed and offered as points of exchange within each housing area and allowing public views and access to a certain degree without introducing any physical boundaries, such as fences, between the village and the areas beyond. 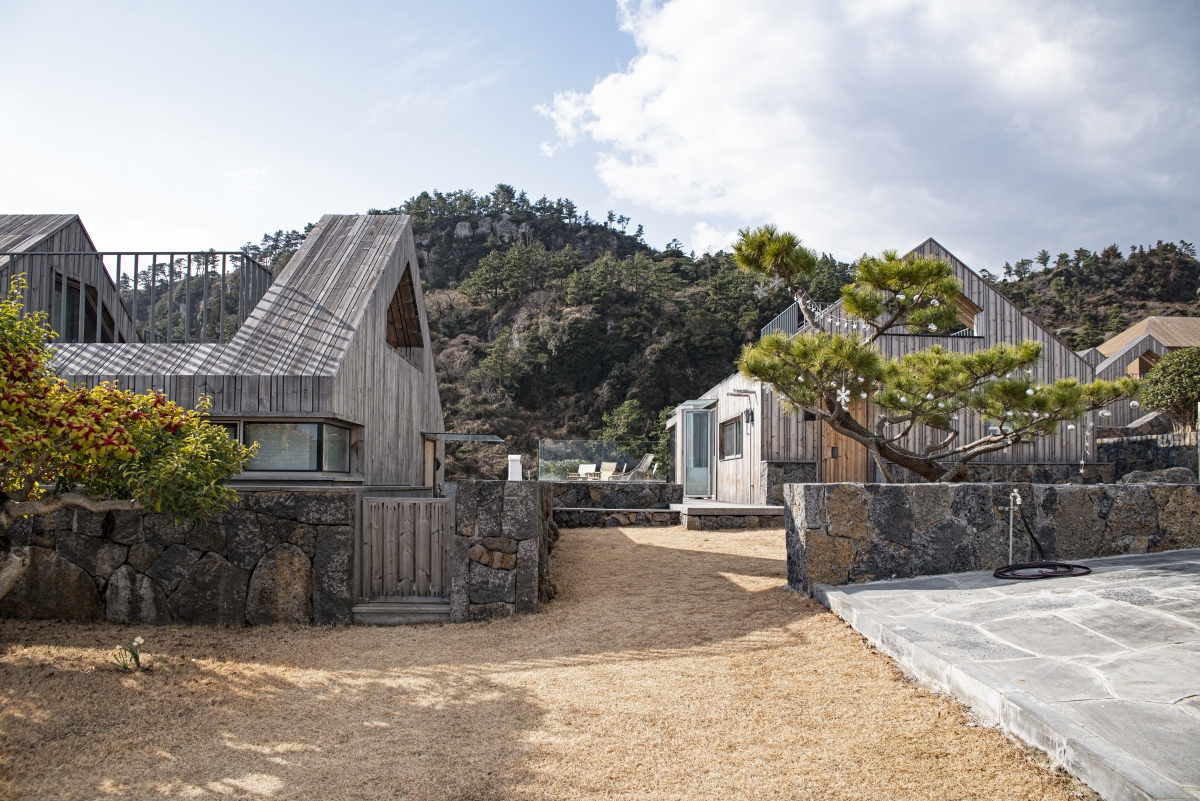 Above all, along the front street we introduced a number of visual corridors for the public to enjoy the view toward Baksugijeong, the backdrop to the project. It would not have been easy to imagine whether it would be a project for those who do not tend to agree with each other. The six sites were divided into sections of approximately the same size. Therefore, we ensured the merits and demerits were not biased in terms of scenery, arrangement of public facilities/elements, and accessibility. Later the clients decided on the ownership of each lot through internal discussion (including concession) and continued to honour the agreement until the end of the project. 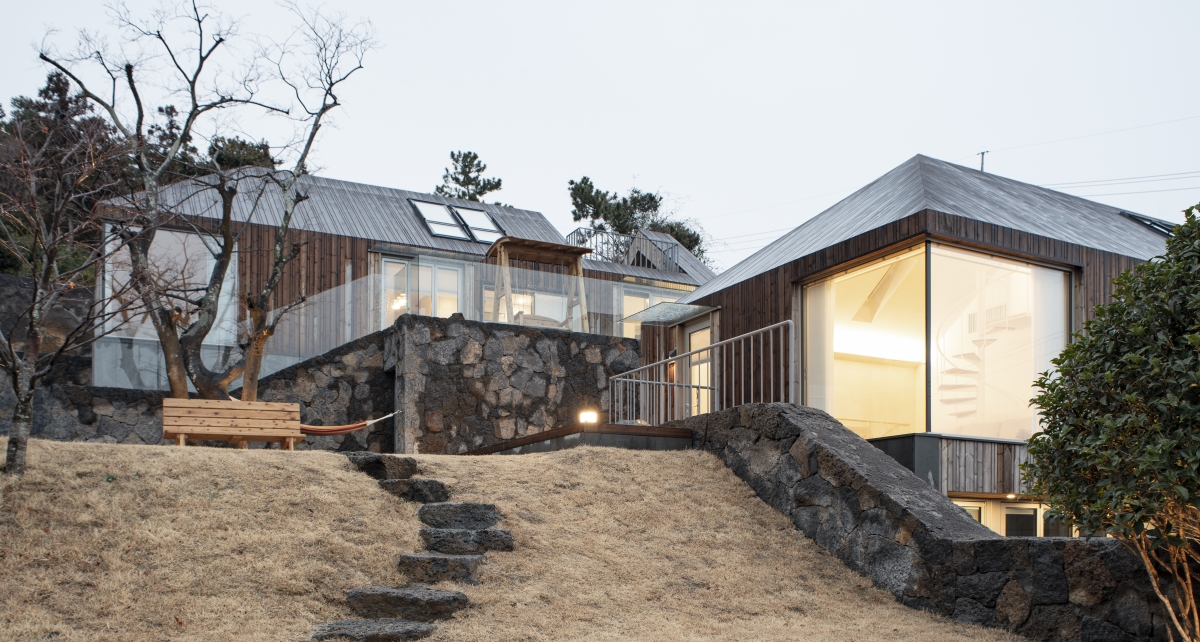 The six houses have different orientations, vertically and horizontally, responding to the clifftop location and the scenery facing the Pacific Ocean. The shared elements necessary to a village, such as a public carpark, the village common, a pond, an outdoor jacuzzi, a public gas tank, and access to neighbouring areas, were evenly allocated to each plot. From the southeast to the highest north-westerly point, the village’s public byways connect the meandering routes around the houses, and a green space featuring plants native to the island.

Each house has one floor above the ground and one below the ground. Initially, it was a terraced field, but in the process of restoring the original terrain it has taken on a gentle slope. The basement floor makes the most of the site’s slope, exposing part of it to the exterior, and creating a unique outdoor space in front of it. Most strikingly, the dramatic scenery of Baksugijeong can be seen from the basement and outdoor spaces of the homes placed on the cliffside. 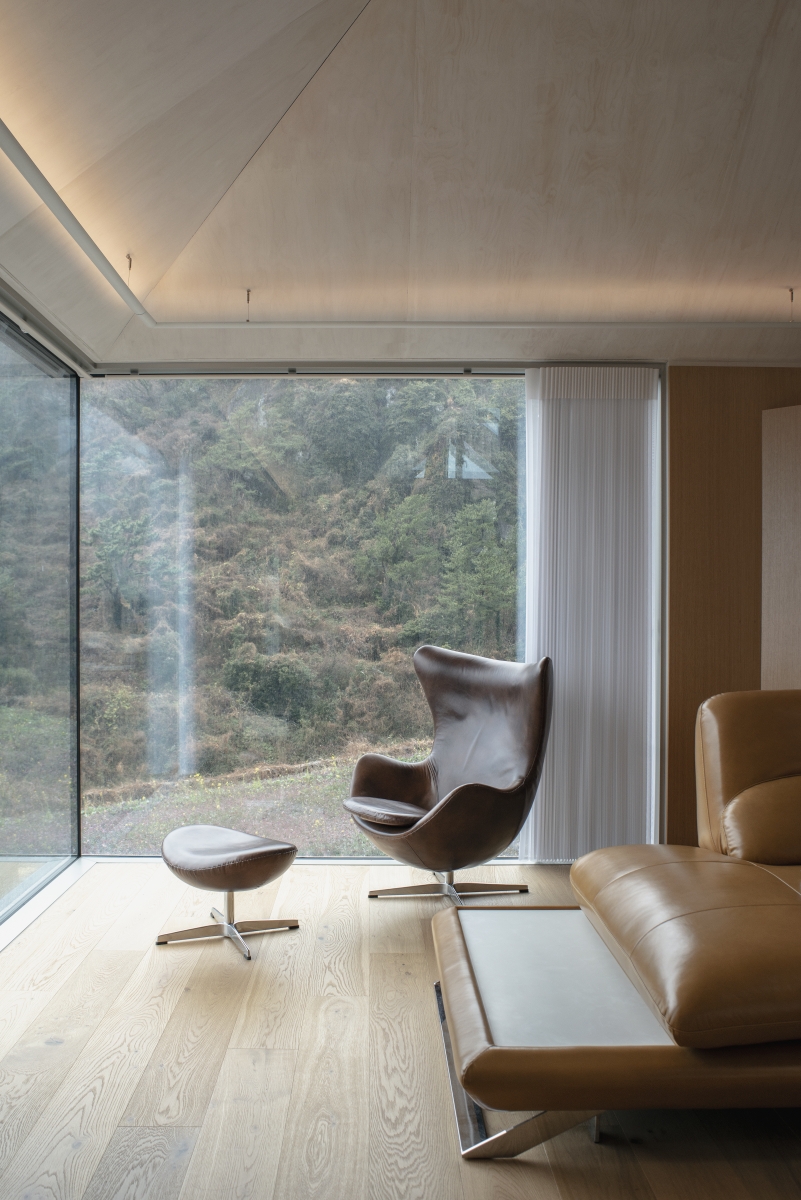 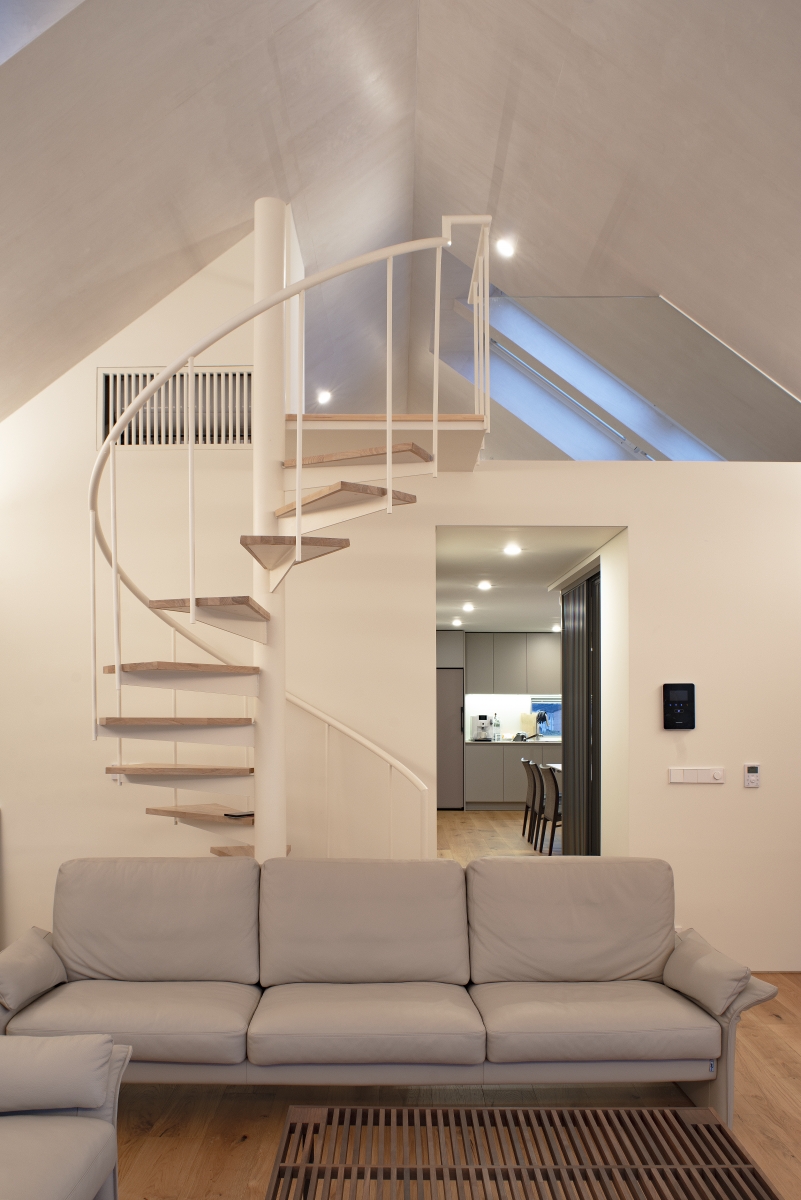 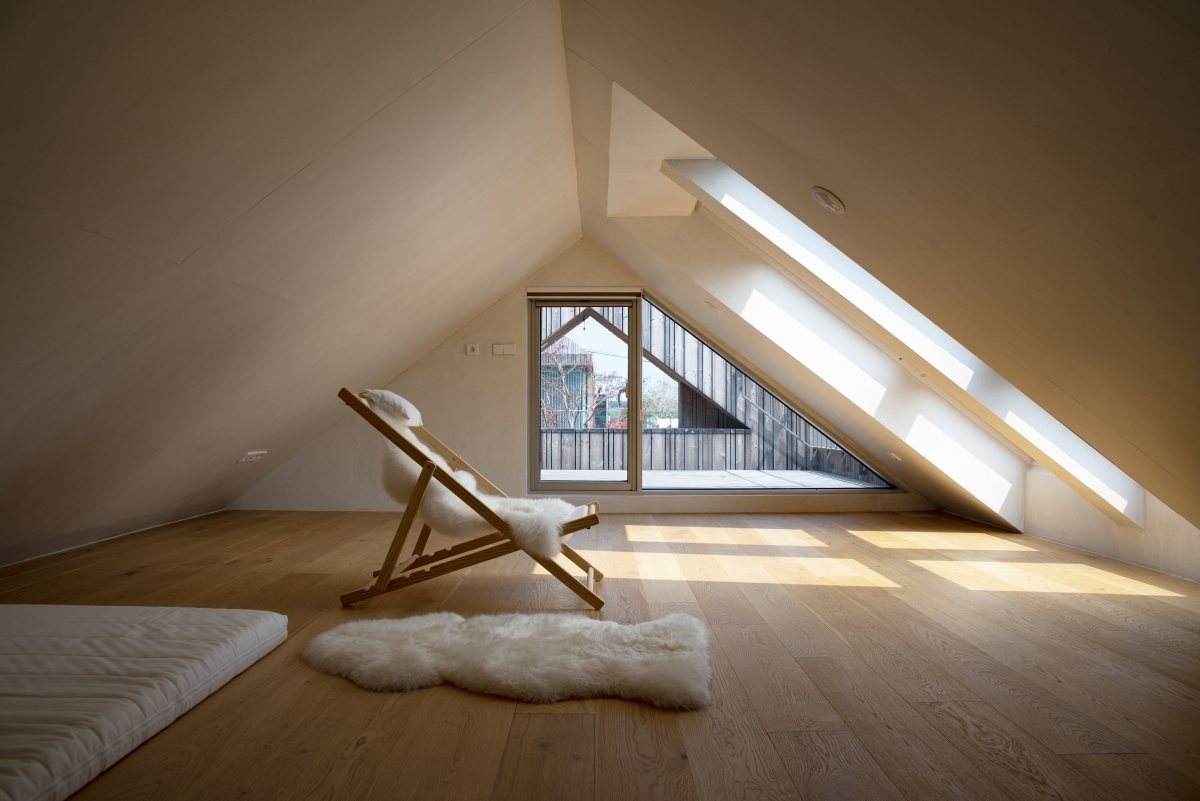 When we made two prototypes at the basic planning stage and both of them was chosen by three owners, we redesigned them, reflecting their unique needs more closely. It was an approach that sought organic unity in its overall materials and layout while at the same time securing the individuality of each house. The combination has changed according to several adjustments along the way, but as a result, the principle of securing unity and individuality at the same time was observed. Above all, it is worth remembering that no client had any objection to the overall unity.

Due to the complicated process consenting to construction, the entire site had to be divided into six zones three times, and as a result, it took four and a half years to complete construction. In addition, in order to better understand and overcome the cultural differences that occur when clients who share the background of the high-tech precision industry encounter architecture of longer historic traditions, the dynamic exchange of opinions and mutual learning cannot be avoided. Communication and cooperation with local workers in Jeju were also significant variables, and fortunately, the stable performance of the woodworking team led by Carpenter Kim Hyeyoung was of great help. 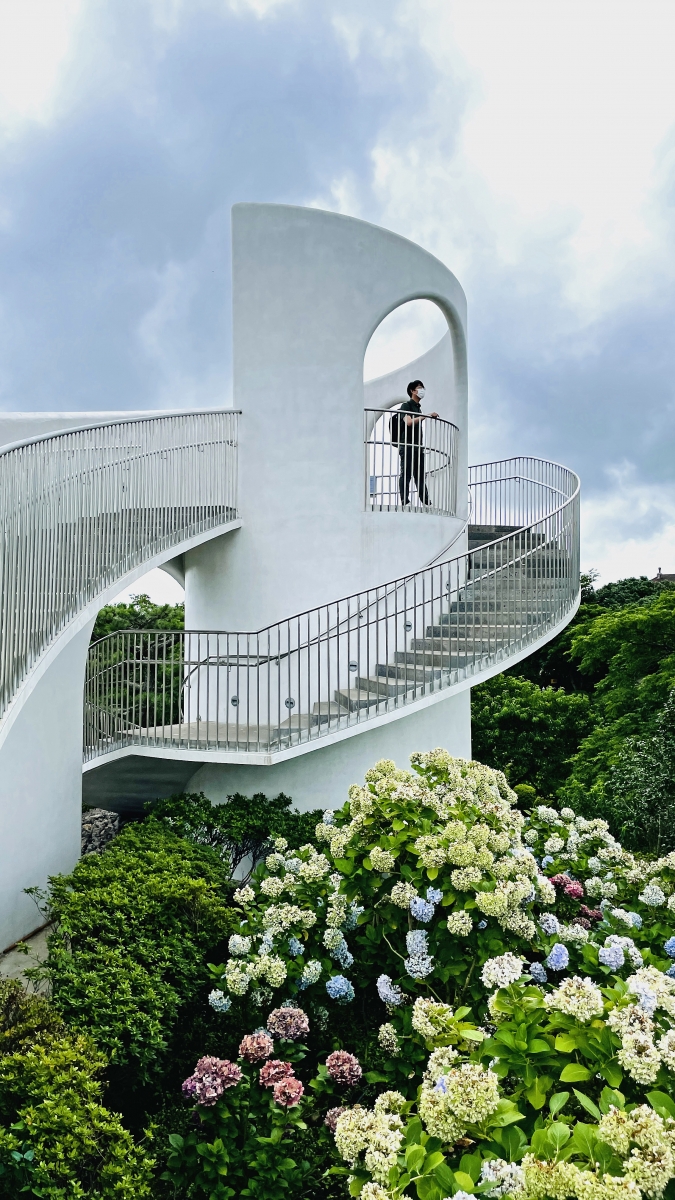 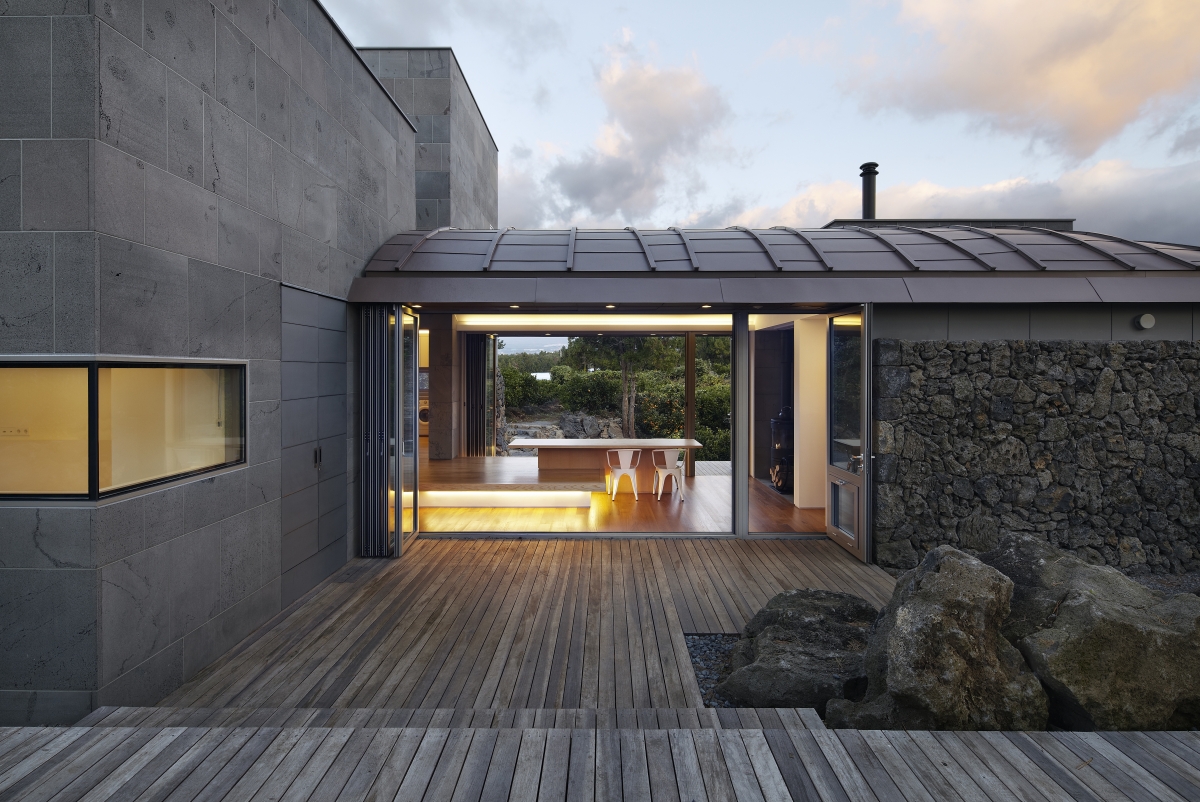 The Wind Hill is the largest and most complex case of the five projects Doojin Hwang Architects has worked on in Jeju since 2012. Other projects include detached houses in Hado-ri and Bomok-dong, and a hanok and observatory inside Camellia Hill, an arboretum on the island. Although these projects are very different in shape and materials to The Wind Hill, if there is one thing they have in common it is their attitude to the regionality of Jeju. It was not a matter of defining the locality of Jeju in advance and making architectural decisions according to these conditions. Although volcanic stones, which are plenty due to the geographical conditions of the island, were used a lot in common areas, this was also because they were the most suitable in reality. It did not even borrow the forms of local traditional residential spaces, such as the well-known angeori (central structure) or the bakgeori (subordinate structure).

Due to the development of materials and technologies, along with lifestyle changes, a sense of regionality no longer works centripetally and it does not need to be. There are many cases in which the result of reflecting such an idea is somewhat unfamiliar. Conversely, I was more interested in expanding our understanding of new regional characteristics created by gathering information on individual cases free from the existing regionality discourse. Of course, as well as individual projects, I believe this approach will also be subject to evaluation.​ (written by Hwang Doojin / edited by Kim Jeoungeun)

Lee Jinha and 5 others

Hwang Doojin
Hwang Doojin was born in Seoul, Korea in 1963. He studied architecture at Seoul National University and Yale University. Having worked in Korea, Japan and the US, he founded his own practice, Doojin Hwang Architects, in 2000. Hwang’s built projects include Castle of Skywalkers, Won & Won 63.5 and North Terrace. He has authored a number of books on architecture and urbanism, and lectured and exhibited extensively both in Korea and abroad.
No.654 May 2022 Hwang Doojin house visual corridor light-frame wood structure rain screen Thermowood
LIST
bookmark_border
favorite_border
0