A House Where the Past and the Present Share​: Rag Doll 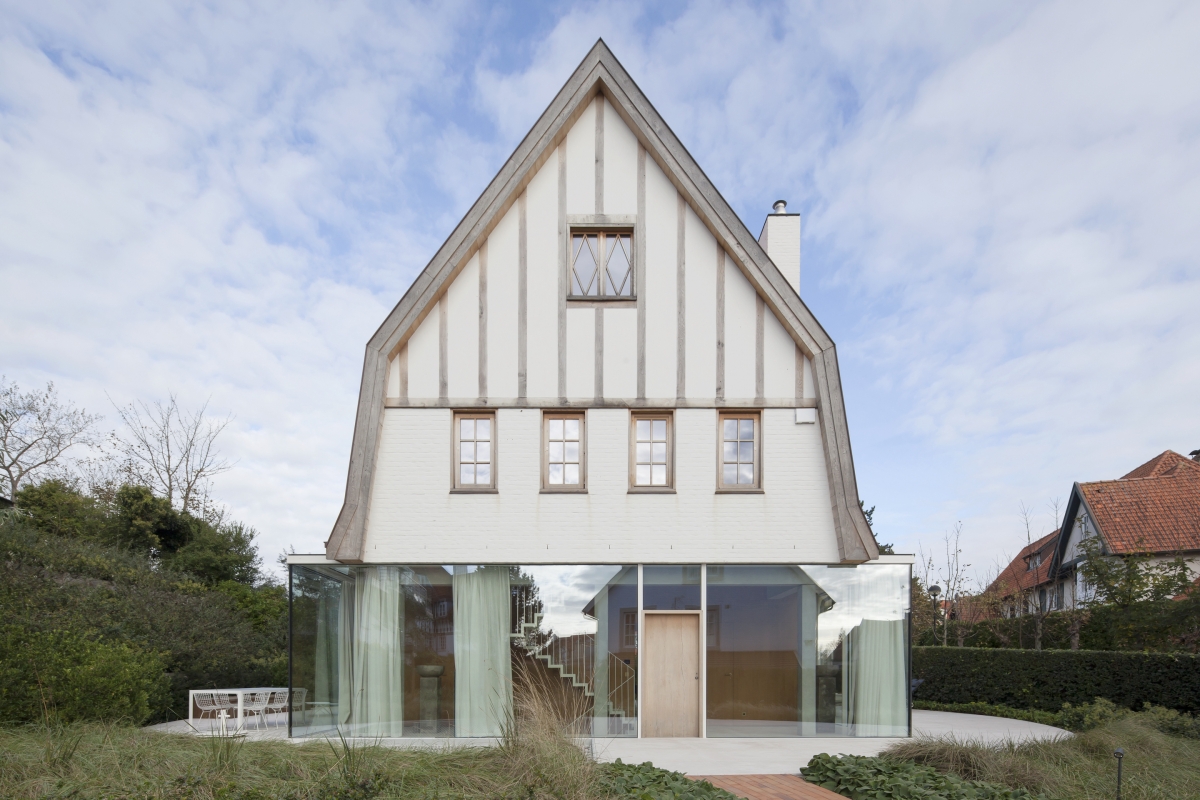 A House Where the Past and the Present Share​

Bang Yukyung (Bang): This is a home renovation project on a site located in the oldest residential district in Knokke- Heist, a well-known coastal city in Belgium. Could you tell us more about the architectural characteristics of the houses in this region in general?

Seger Delmulle (Delmulle): The layout of the Prins Karel district is largely based on English gardens from the 19th century. It is therefore not surprising that the largest proportion of the architecture found here was inspired by the English cottage. This house is one such example. These cottages pay the necessary attention to their surroundings, and adapt to the existing terrain. The villa suburb consists of an open morphology, detached villas of a particular character, mainly consisting of three storeys with a roof. The steep roof, rarely restricted by a clear typology, is an important element in these cottages.The ground floor forms the base as the first horizontal layer. Above the ground floor, there is a timber framed façade, which is imitation and has no conceivable function. This styling is typical of the formalism of cottage architecture found on the Belgian coast. A succession of elements – (painted) brick, plastering and timber, which divides these houses into horizontal bands – are characteristic of the houses in this neighbourhood. Owners were later encouraged to paint their houses white: white walls and red roofs. From then on, the originally colourful façades of the cottage villas disappeared under a layer of white paint. This fashion for white in this district is a consequence of the rise (from the 1930s) of the rural farmhouse style.

Bang: I understand that the existing house is a registered building that is under management, and therefore cannot be demolished. I would like to know the approach and standards under which this house is to be preserved.

Delmulle: The Belgian Coast has undergone a true metamorphosis in recent decades. Authentic seafront construction has been systematically replaced by architecture of a completely different order: a wall of large-scale apartment buildings have replaced picturesque single-family dwellings. Where authentic coastal buildings still exist, as in the Prins Karel district, there is reason enough for the city council to treat such neighbourhood landmarks with care. As such, they identified the buildings that best determined the character of the neighbourhood. The inventory began with a historicising and conservationist attitude towards the patrimony, but also left room for further developments. This house is also labelled as valuable, which means that it cannot be demolished. However, adjustments to contemporary living and personal comfort are possible.

Bang: Looking at the plan, each level possesses spaces with distinctive characteristics. There is also underground parking with rotating floors, in addition to a newly installed elevator. What kind of home did the client request specifically?

Delmulle: It was difficult for this client to define their desires, not only in terms of finding a suitable building or site, but also in finding the style or feel they wanted. Did they want a modern home or something classic, and where? In the city? In the countryside? Everything was on the table. A print-out of the duality that came to discover in the clients is actually a picture of beautiful contrasts; a fully glazed ground floor and a cottage above it. The owner bought the house because of its location rather than due to its appearance or features. The house was not what you would call an architectural gem and its orientation was also far from ideal. A big re-organisation was clearly necessary. It is, however, an excellent base for cycling trips and walks by the sea. His wife was seriously ill at the time and living by the sea was thought to do her good.

​​Bang: What were the concept and design strategies you considered to be most important to renovation? What role did the site’s regional and geographical characteristics play in your design?

Delmulle: The construction of this cellar was a request made by the client. Building the cellar meant that the whole house had to be braced above the ground floor. This formed the perfect basis for the design. The whole house was cut in half, as it were, under the roof, with the existing structure above and a new fully transparent ‘glass house’ below. We wanted to create something contemporary with an evident respect for the past, without being too conservative. The volume and silhouette of the house have not changed. Even though the new glass construction is the protagonist in this story, it remains literally and figuratively subordinate to the more traditional aspects. The cottage was already (intelligently) positioned considering the dune relief. Unfortunately, this meant that the orientation was not ideal (entrance in the south, living spaces in the north). The new transparent ground floor (and voids) ensure sunlight now enters the living spaces all day long. To emphasise this open living experience, a circular terrace was built around the whole house, mimicking the natural flat terrain of the dune. Sandstone was used as flooring to further emphasise this idea. Moreover, the giant sliding windows, which open up the corners, emphasise the extreme nature of this inside-outside relationship. 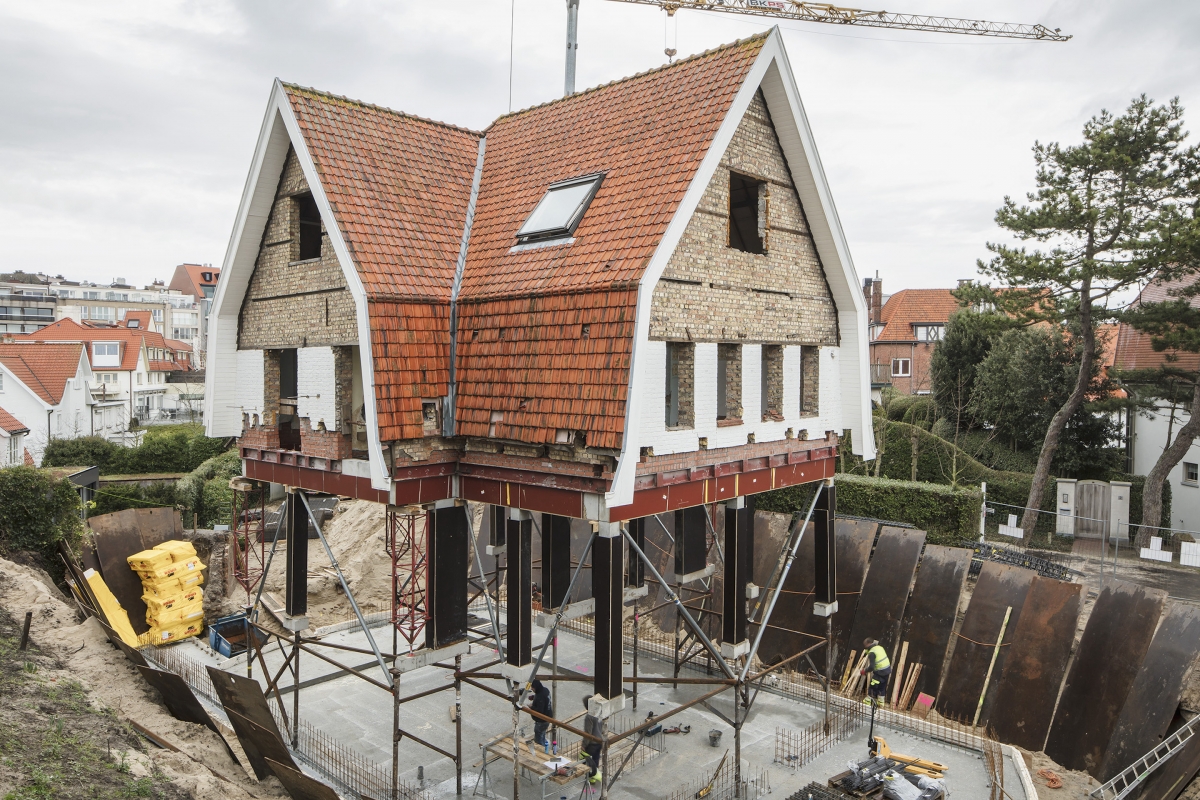 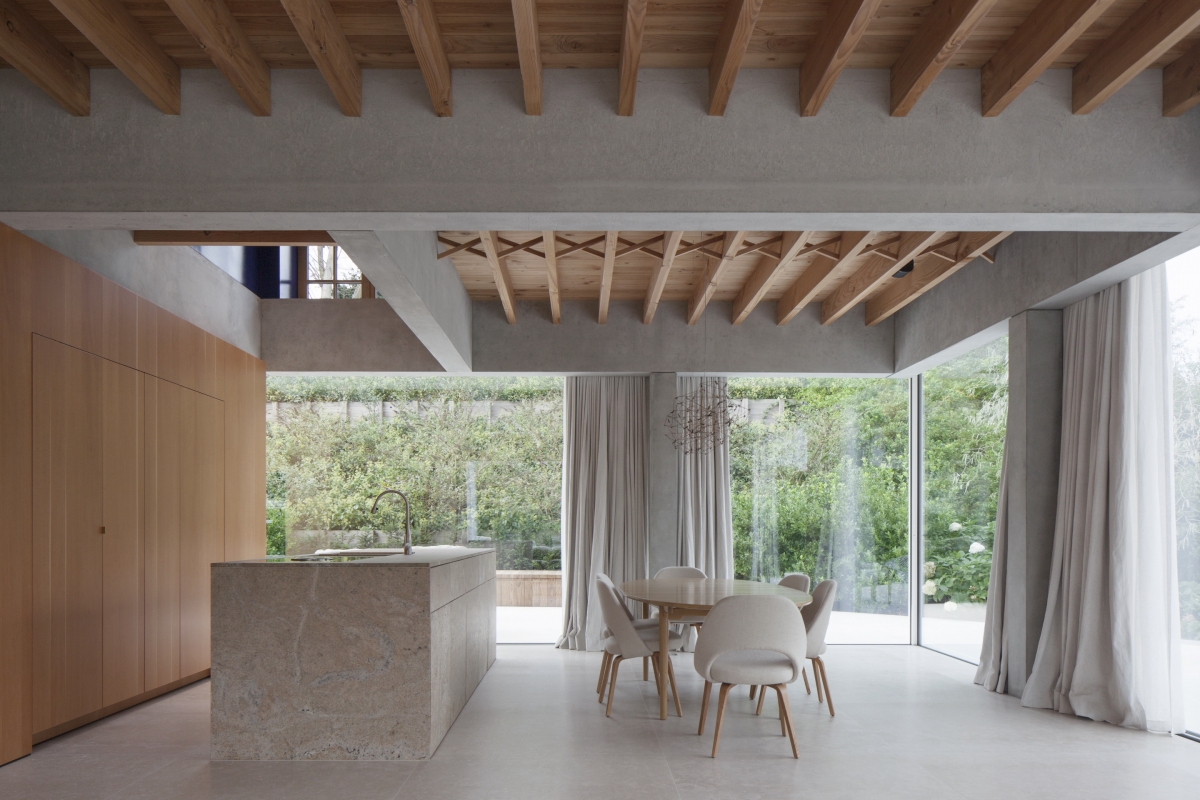 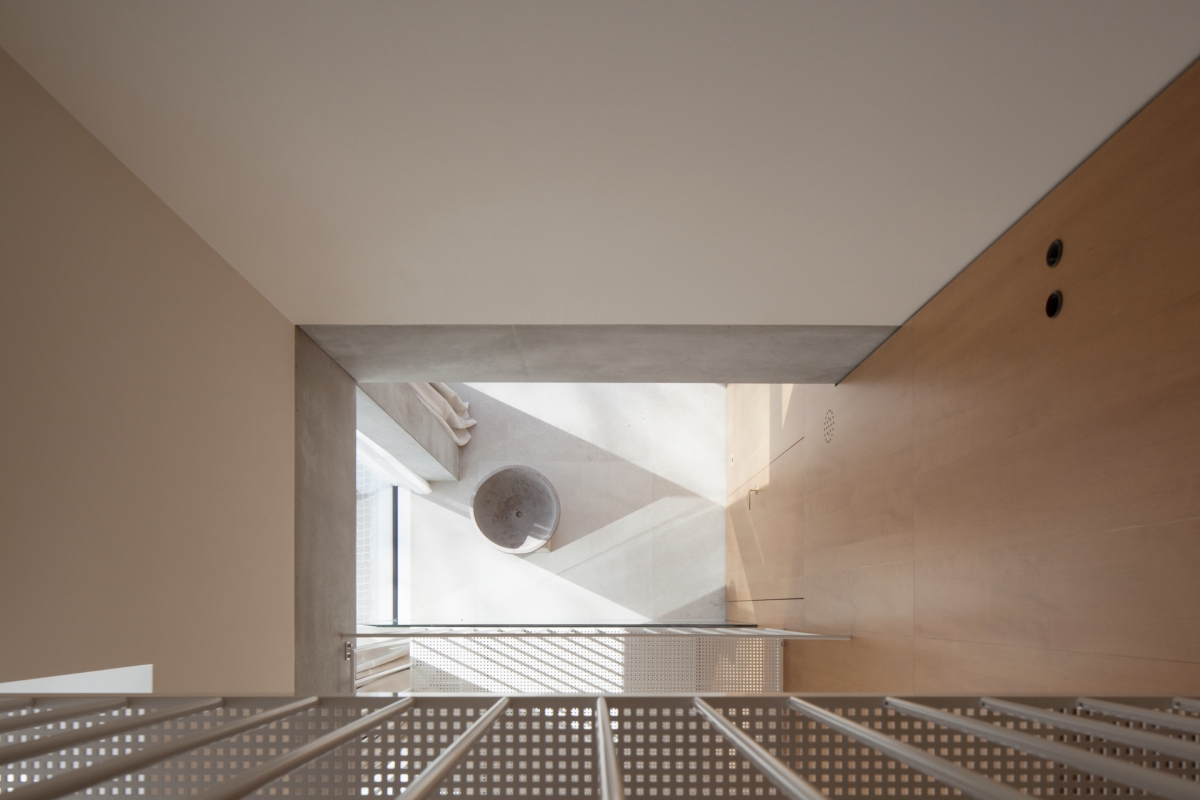 Delmulle: The process was unexpectedly rational. The upper floors, which were completely retained in the plan, were supported during the work by micropiles that had to absorb horizontal and vertical pressure forces. Below this there was ‘working space’ in which to build the new basement and glazed ground floor. Trenches were made in the existing façade, into which the piles were drilled all around in the ground. With these micropiles (which held up the house above) in place, the earth could be dug out from under the house and the basement could be cast in concrete. During this phase, the bulldozers and trucks, excavating the cellar underneath the house, had to take care not to ram the piles. A precast concrete skeleton was finally placed on top of the new cellar walls, on which the existing house finally rests.

Bang: The line of sight and circulation are also vertically connected inside the building. This is a view that is distinct from the existing house’s spatial composition. In line with a contemporary lifestyle, how did you come to decide upon the spatial composition and material selection?

Delmulle: A notion of duality has been implemented with equal radical energy throughout the interior and in the exterior, with a distinctly contemporary living atmosphere and minimalist furnishings in the transparent section and the new basement. One of the most striking elements is the lacquered metal staircase, which connect the whole house vertically. Perforated steps make this staircase into a delicate semi-transparent structure causing light to swirl downwards. On the ground floor, an oregon wood veneer central volume (matching the existing wooden ceilings) and a sandstone floor form the most present components. The existing upper part was thoroughly freshened up while maintaining the original atmosphere and colours.​ 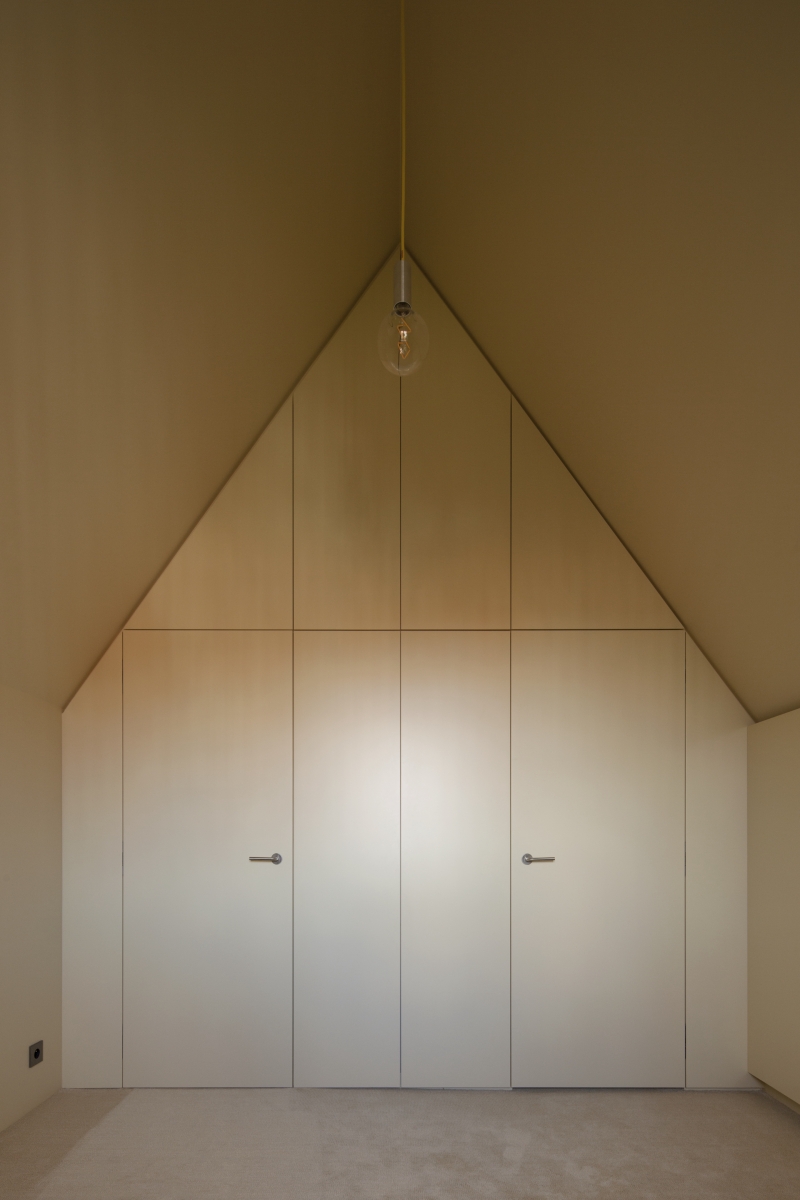 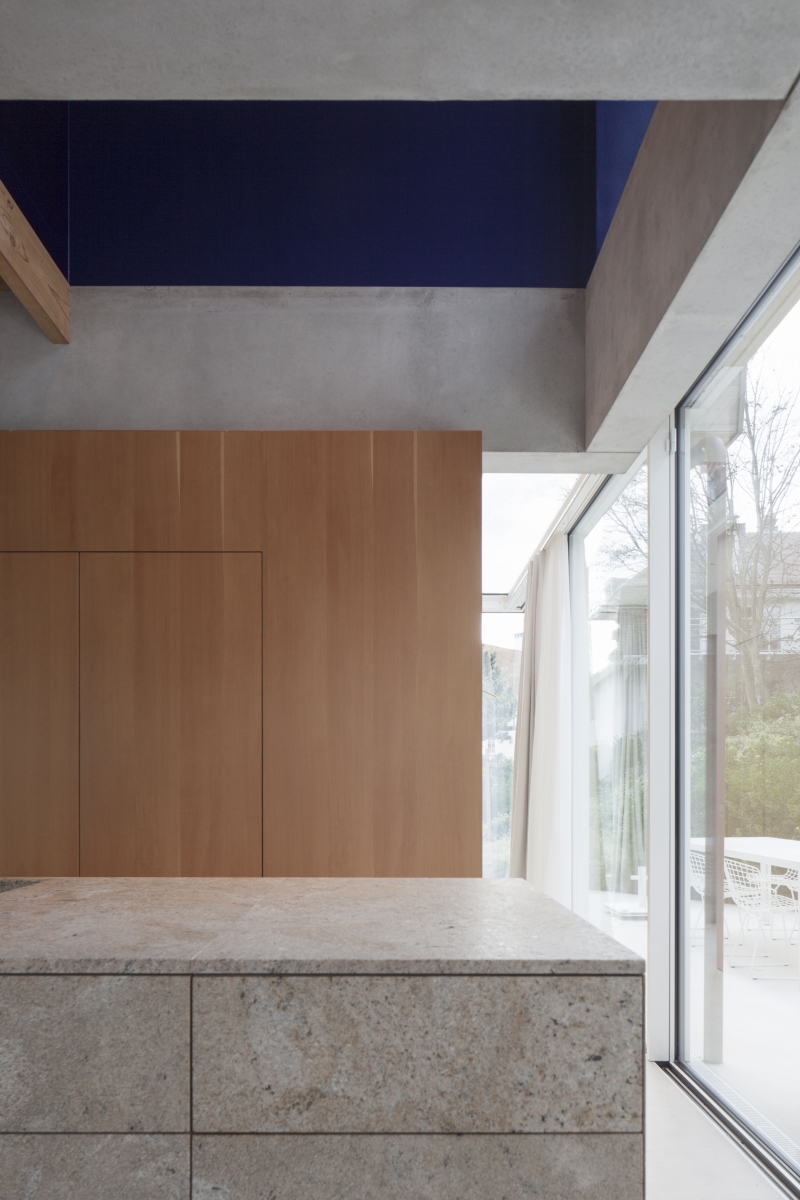 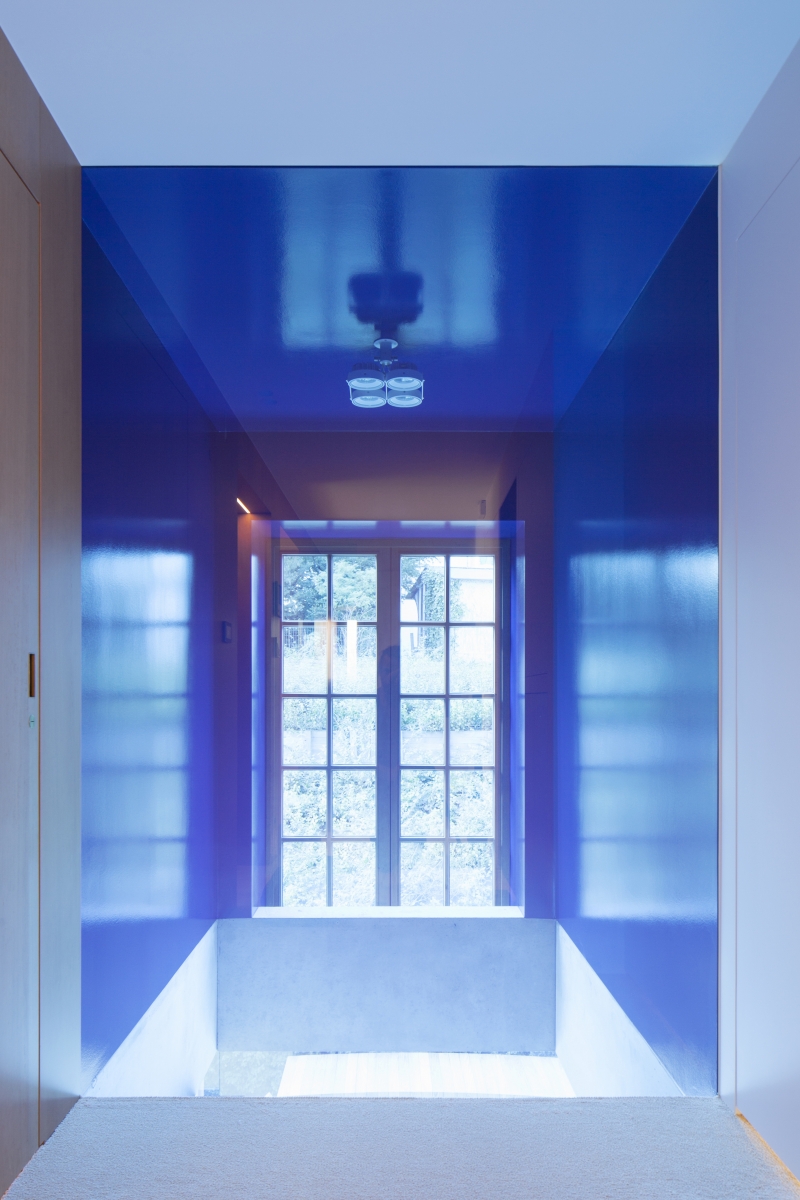 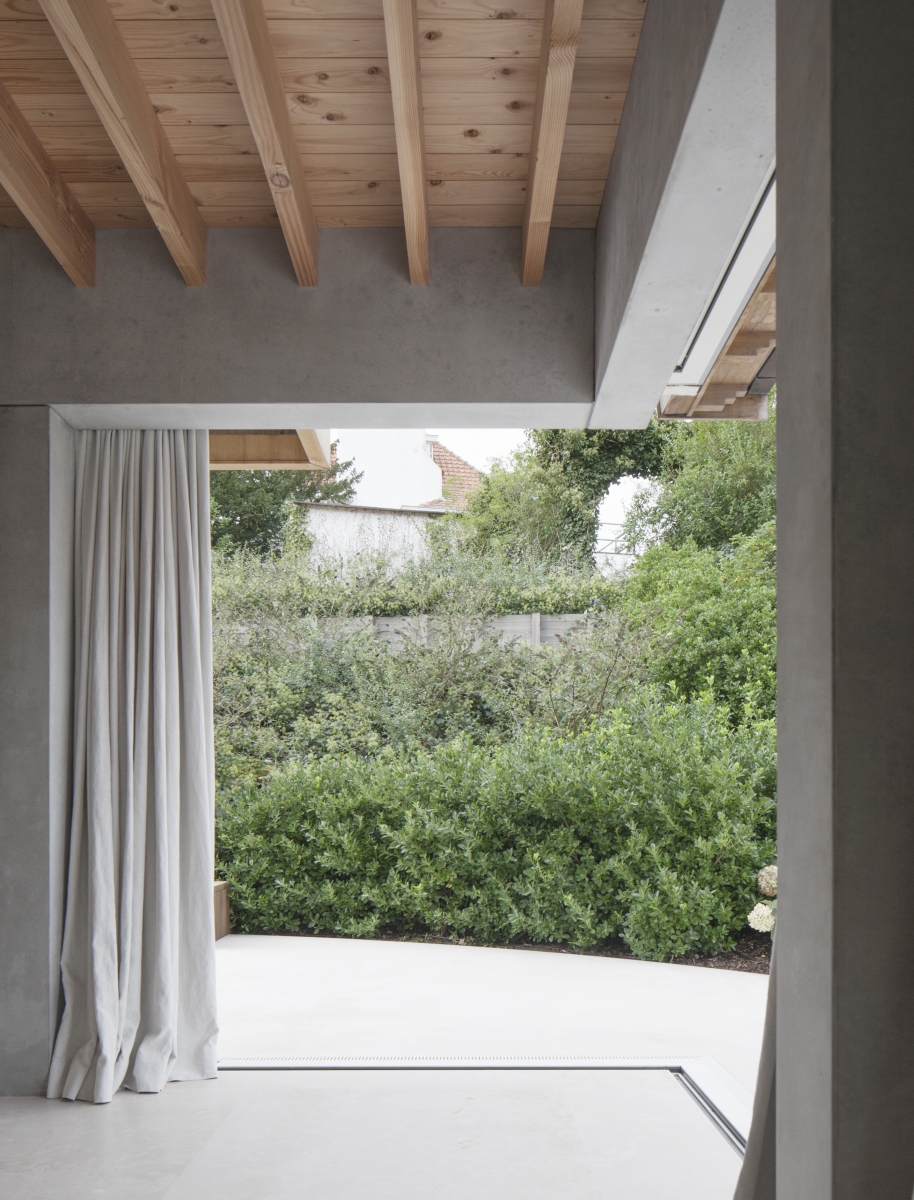