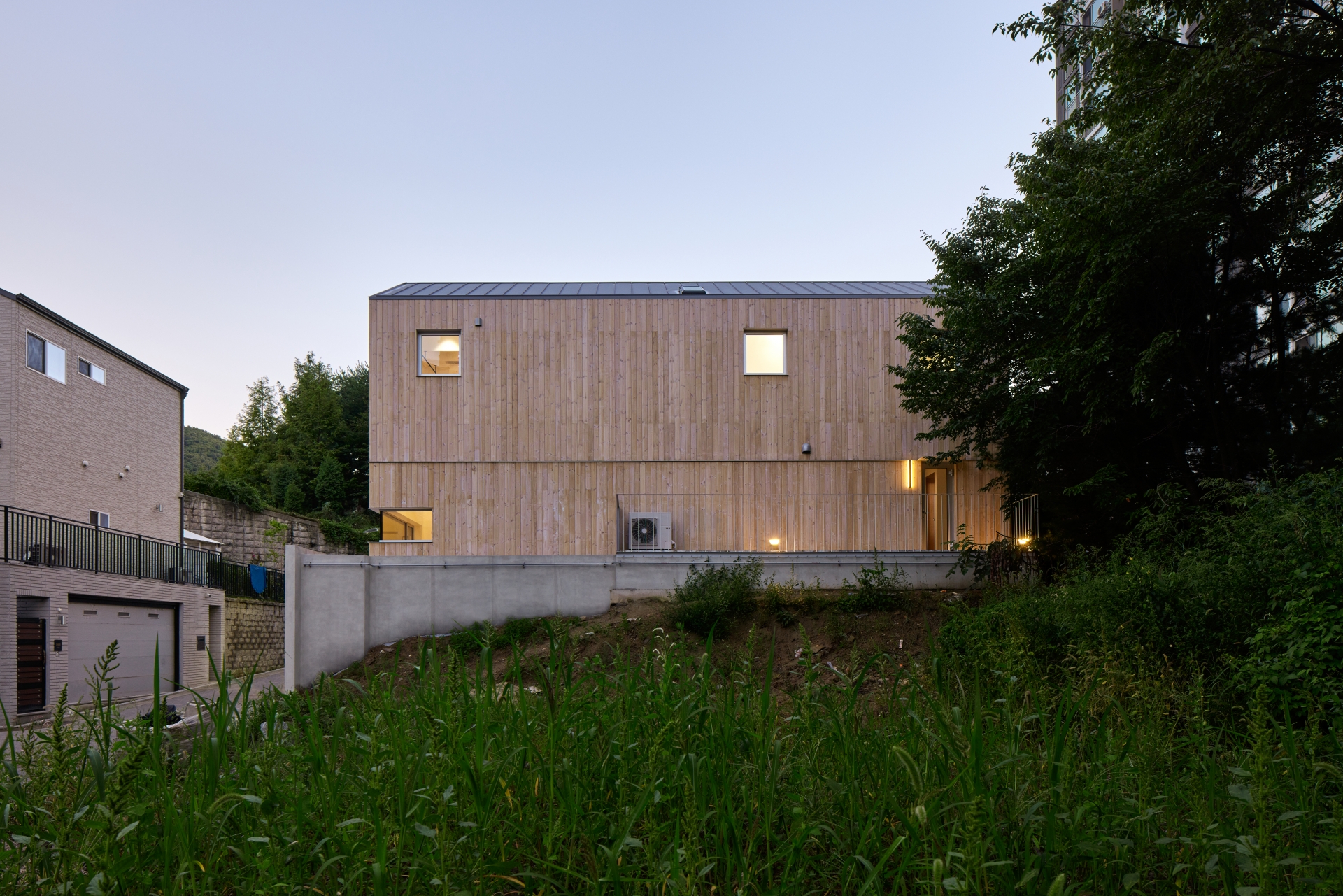 A HOUSE THAT EMBRACES THE VOYAGE HOME
The Jukjeon Silvery Wood House is located on the north eastern tip of the Jukjeon district. With its backdrop of lowset mountains, constituting the boundary marker of Jukjeon-dong, the scenery of a detached housing district within a typical housing site development area emerges, in which a couple of houses are assembled, composing a village. Close to the site, a couple of houses have cropped up at the same time, with similar materials and forms, establishing a landscape similar to any other village. ​
The Vernacular of a New Town
Under the circumstances, what with the paucity of the site, the exploitable building and floor area ratio, and a couple of preconditions on the district unit plans which determined the greater part of the form of the project, the challenge for us was to respond sensitively to this context and to discover its potential. As the area for the individual plots has been divided into the minimum needed to develop residential projects, the volume of the project in question had to be stretched out by fitting it snugly to the borders of the site. As such, it was judged that it was important to control a sense of distance with neighbouring buildings. The neighbourhood residents were sensitive to an invasion of privacy due to the introduction of neighbouring homes, and so the client also emphasised the need for residential space that respects privacy. While no buildings had yet been constructed on the neighbouring site, as a mark of paying attention to the house to be built in the near future, the external outlets of the house were minimised while placing them in the appropriate places and at pertinent sizes. They remained conscious that a wariness of the outside should not lead to inconvenience when living within the house. Most of the neighbouring houses were built with façade materials like stucco, brick and ceramic siding to consider construction and cost efficiency, composing a scenery which could be known as a new town vernacular. Reflecting the desires of the client, desiring that the project would not possess the conventional exteriors of the neighbouring houses, timber was chosen as the primary outer material. It requires careful care and planning in terms of construction, yet it also portrays the archetypal image of a house. The timber was treated with surface protection in the factory and constructed on site to resolve difficulties in maintenance and care while ensuring a streamlined quality, as a choice which anticipated that it would gradually transform into an ash grey façade which would evenly erode with the passing of time while maintaining a consistent texture. 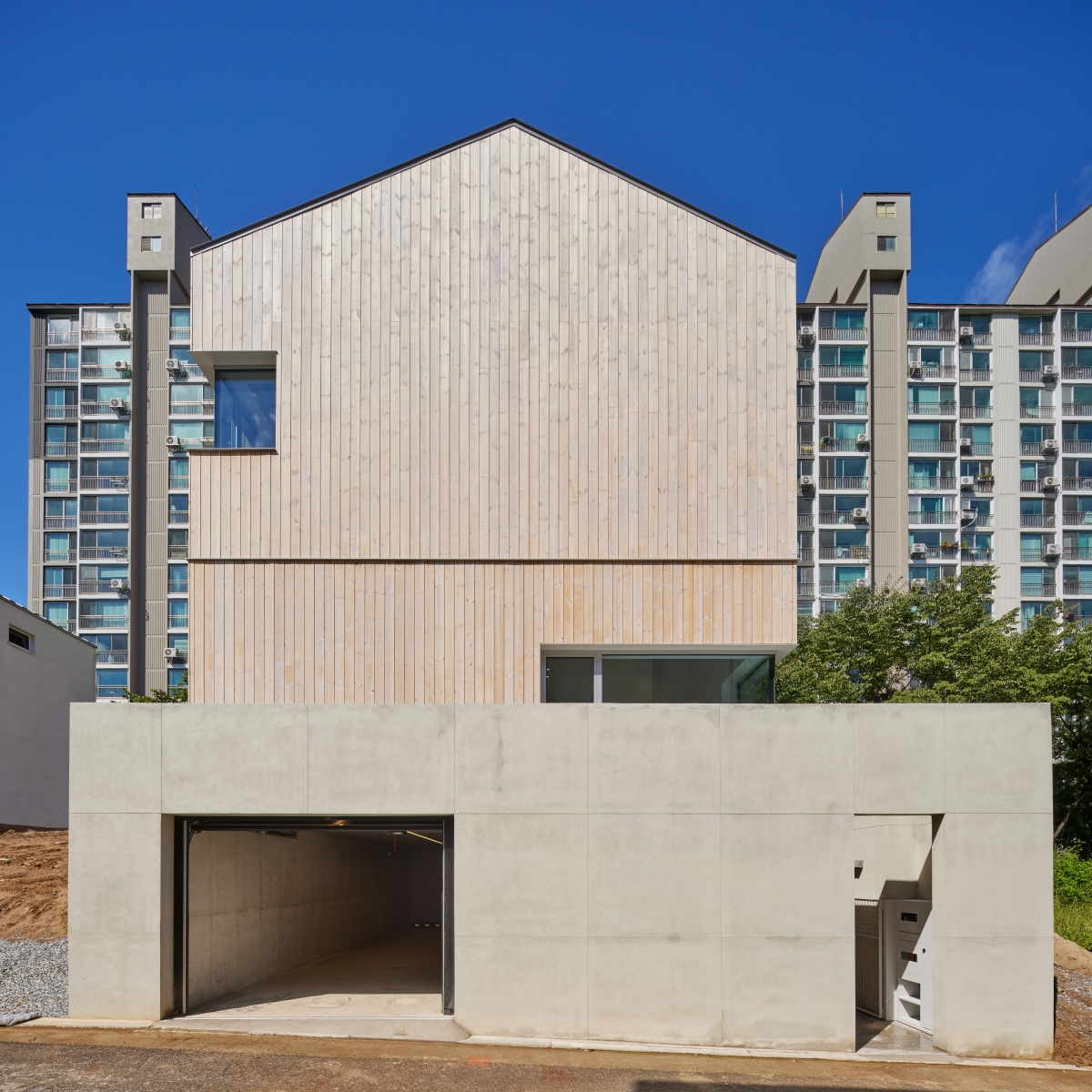 The Moments of Entrance
The basement level, which faces the road, was stylobated with sturdy concrete to support the timber volume, accommodating the entrance hall of the house. The house entrance communicated the significance of boundaries from the ourset, and as respite for those who return home having concluded a difficult day in society. Two design devices were conceived for the Jukjeon Silvery Wood House to establish the sequence of those journeying home. In spite of the reduced size of the site, the entrance hall was drawn deep into the site so that it would have a long pathway leading to the entrance hall, and an exercise room as a sort of separate porch role was planned as a buffer space between the house and the road. Within the house, an expanded entrance hall was deemed to be crucial. Extending the time users would spend in the entrance hall, while rendering this boundary space more plentiful – at the juncture where the home meets the city – was achieved with the hope that the family using the house would instinctively sense the shift between realms. A wash sink and bench was placed in the expanded entrance hall to create an impression – as a place of experiencing time while entering and exiting the home – rather than an entrance hall simply remaining as a non- place to house the brief moments of removing one’s shoes when entering the house. 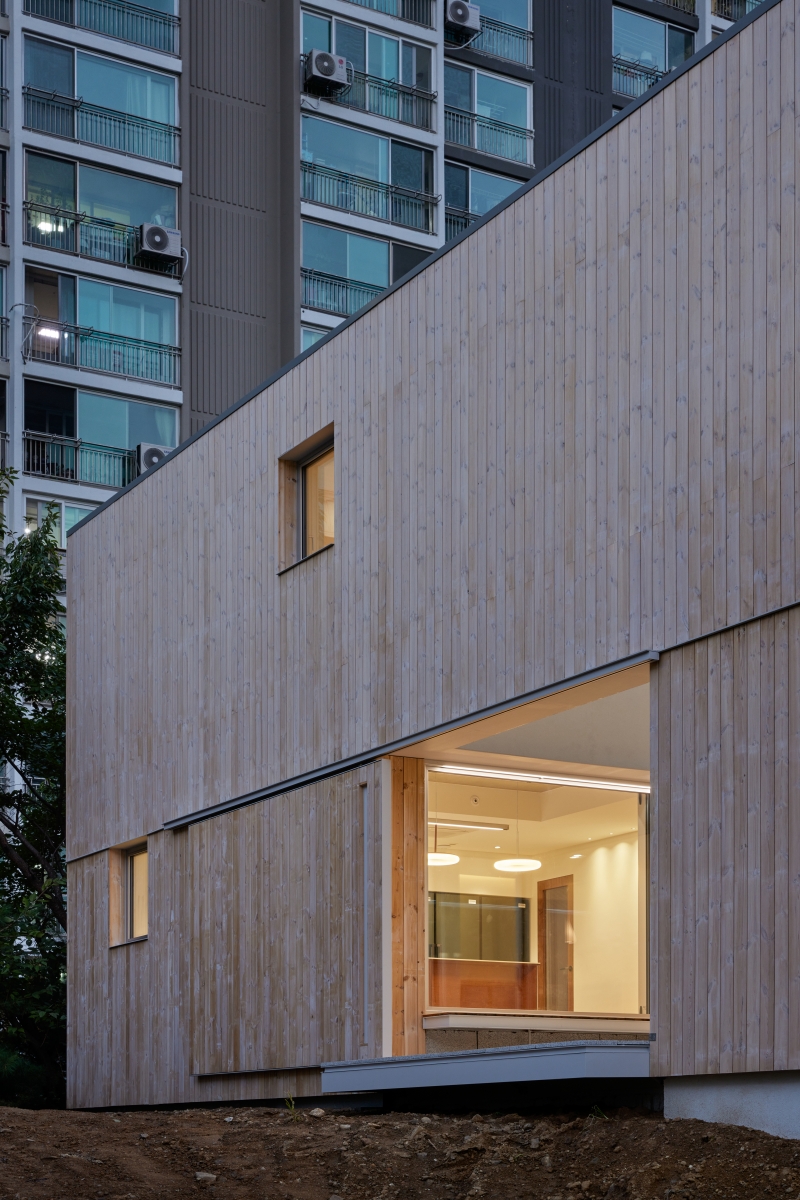 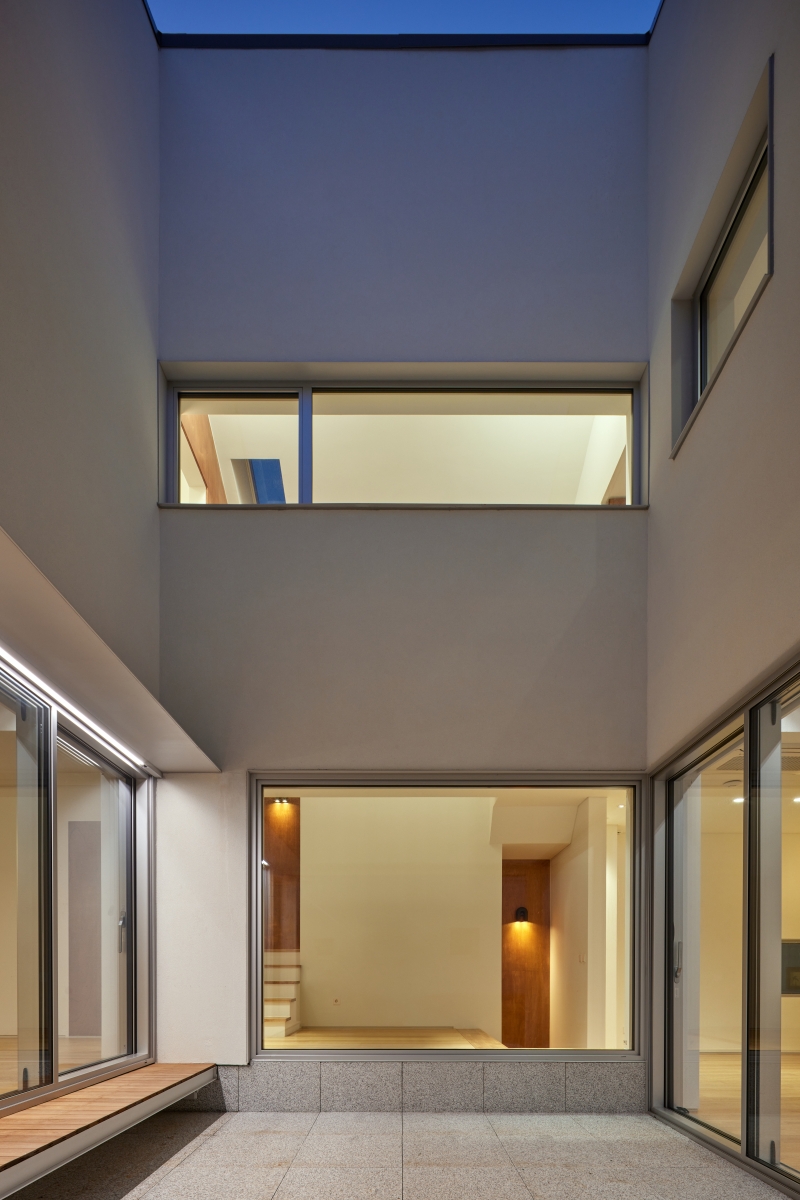 A Deep Courtyard
The first and second floors correspond to the main body of the house, based on a U-form floorplan with a courtyard. The members of the family pass through the entranceway, designed with an intentionally long sequence, so that upon mounting a single storey, they encounter a first floor flooded with light with a courtyard at its centre. Loyal to the wishes of the client, who wanted an intimate residential space, the courtyard was designed to meet at a deepset point in the overall composition. The 4m large sliding wall placed at the end of the garden was also conceived to conserve family privacy. The plan of the first floor is composed of three zones: the dining area, the courtyard, and the living room. Variation was introduced to the height of the space and the level of the gaze of those experiencing the space, so that each of these layers would not be monotonous and could form interesting lines of vision crossing across the space. A difference in the height of the floors, the difference of the ceilings according to the finishing for the ceilings—these two variables were combined to form the axis for the first floor space connected through the kitchen (2,400mm), dining (2,700mm), courtyard (∞), and living room (2,800mm/3,100mm). This is the result of intentions for each of the layers of the first floor to overlap to form a single scene, resulting in a multidimensional and diverse line of visual relationships.  The space was limited in comparison to the number of rooms, and as such the second floor possesses a compact arrangement to accommodate the client couple and their two daughters. The circulation was planned so that the two daughters could share a single bathroom and washroom from inside their rooms. In spite of this small space, the multiple-use family living room (uses as yet to be discovered as the house is occupied) was placed at the entrance to the area for the daughters, while an exhibition wall was installed along the stairs connecting with the first floor for the daughter who studies art and the mother who enjoys sewing design. This wall crosses through the first and second floor space, reflecting the activities of the family to play a central role in aiding communication. The Jukjeon Silvery Wood House draws on the simplest form of a gable roofed house and uses the most basic materials, such as wood, to communicate the image of a house in a calm manner. The project is the result of a long period of contemplation, reflecting on what a spatial experience proposed by a detached house might entail, as opposed to the conditions of life in an apartment. To such ends, we hope that the time spent in the house will become more and more meaningful to its users over time. (written by Cho Yoonhee, Hong Jihak / edited by Park Semi) 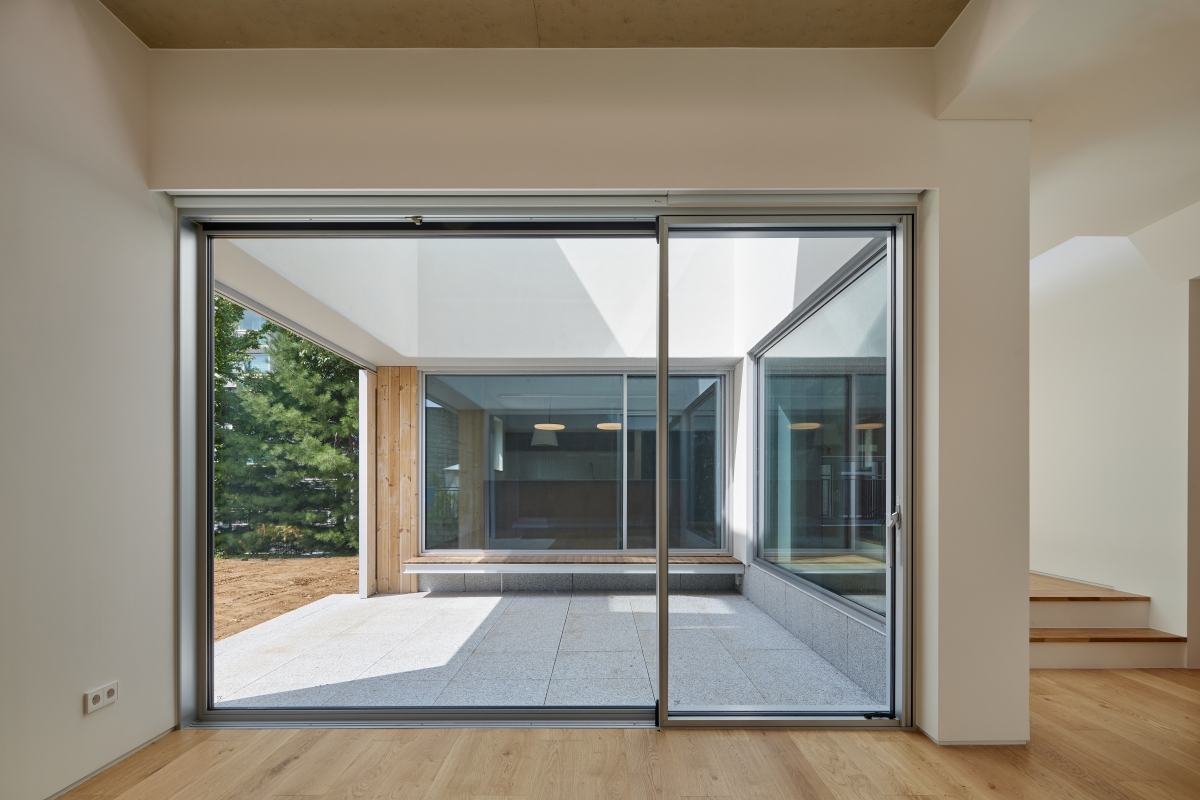 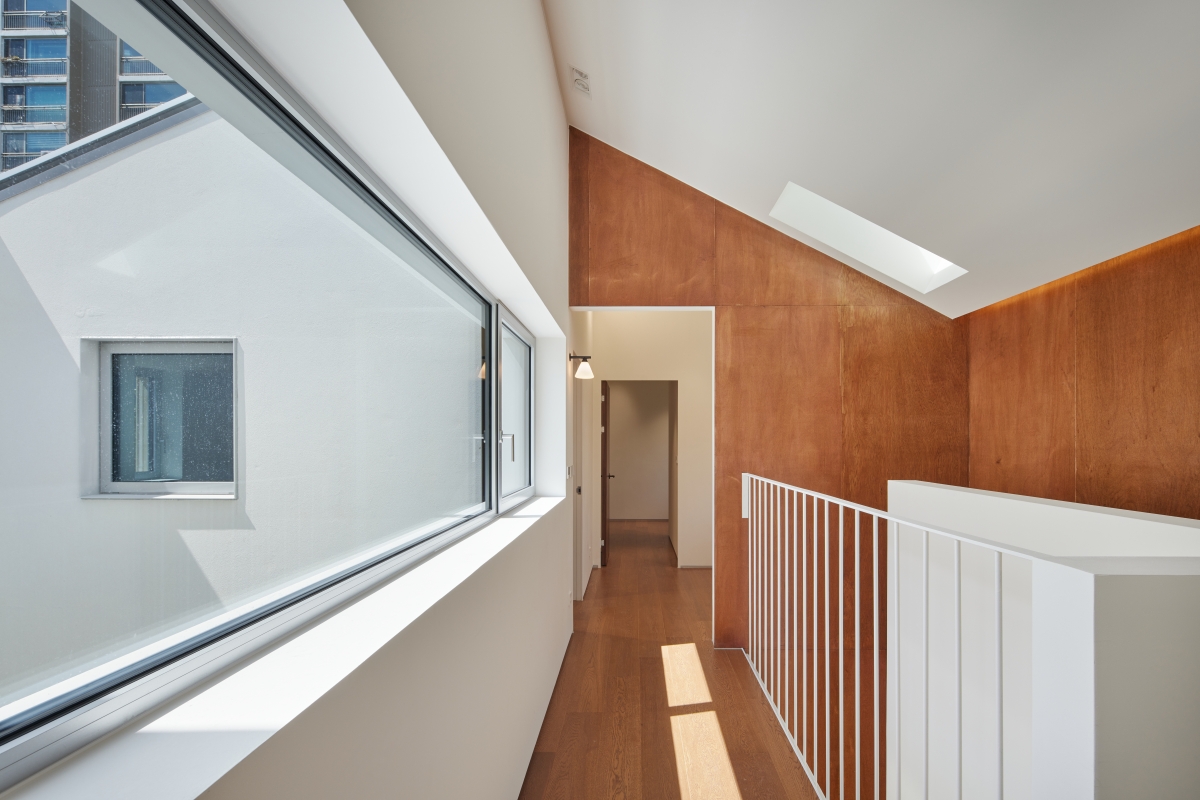 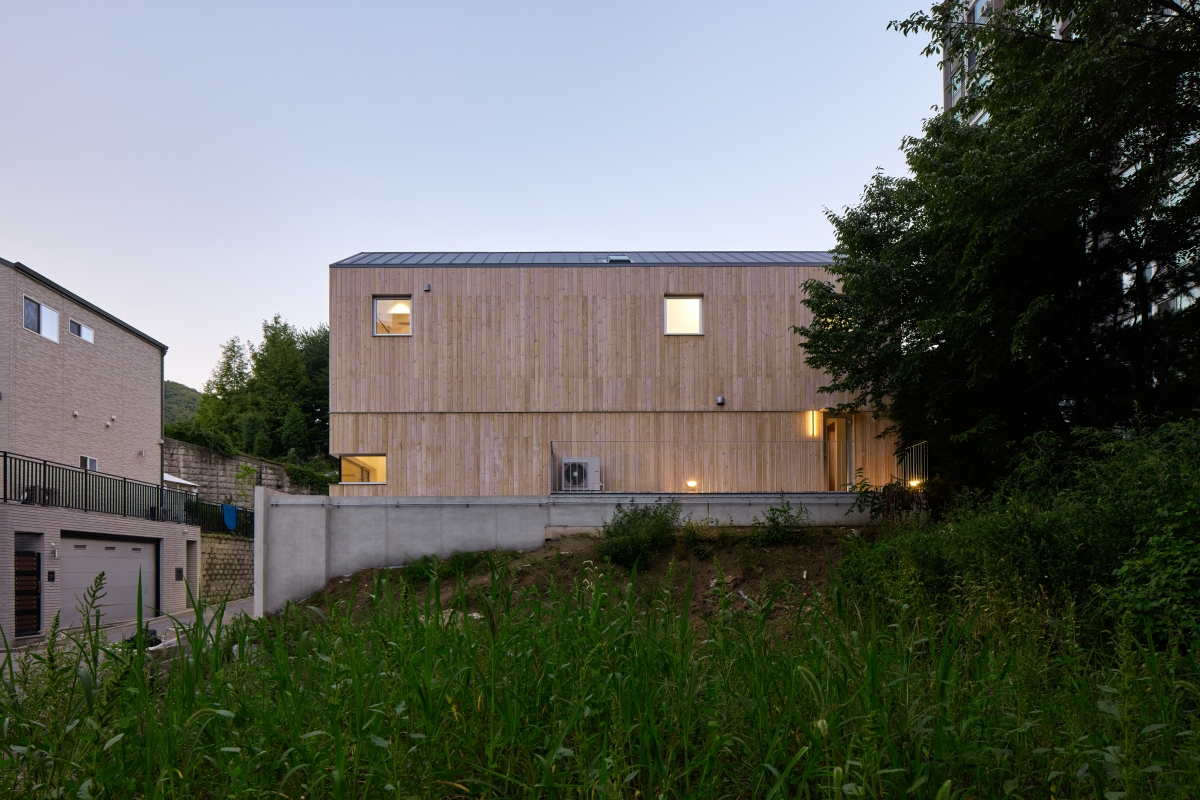 Cho Yoonhee
Cho Yoonhee has been working in architecture design since she co-founded GUBO Architects in 2015. After graduating from the department of architecture at Seoul National University and MIT, Cho built her career ar IROJE architects in Korea and Howeler+Yoon Architecture in Boston, USA. Cho’s interest lies in building urban cities from the pedestrian perspective of an average person. She has worked as a public architect for Seoul Metropolitan Government and won the Korean Young Architect Award organized by the Ministry of Culture, Sports and Tourism in 2021.
Hong Jihak
Hong Jihak, after periods of research and building his career at SAC International Ltd., HAEAHN Architecture, and Center for Advanced Urbanism at Boston, USA, co-founded GUBO Architects in 2015. Hong studied Architectural Urbanism at MIT and received his PhD on theory of architectural history at Seoul National University. Hong is currently working as an assistant professor in the Department of Architecture at Chungnam National University.
No.650 January 2022 architecture architect GUBO Architects Cho Yoonhee Hong Jihak single house
LIST
bookmark_border
favorite_border
6