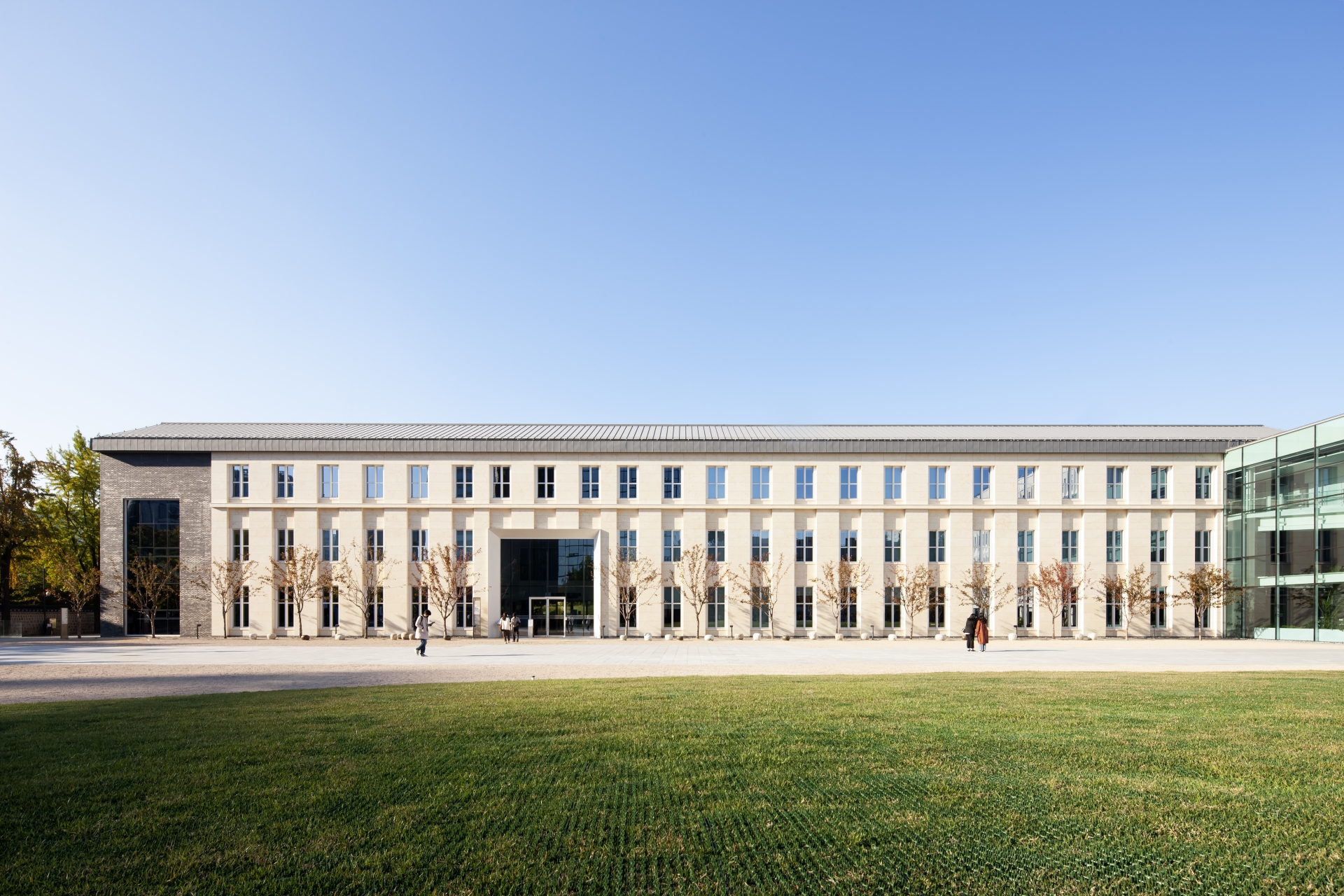 TURF BATTLES: EVERYBODY FOR THEMSELVES

This is a battlefield for turf battles. It bears the traces of Andong Byeolgung, school buildings, fences and yards, birdhouses and entrances, ginkgo trees, and even a place for crafts and artifacts. It is balanced on the blades. The walls and gates that surrounded the school were dismantled, the school was turned into a museum, and the building was transformed to accommodate new uses. From the royal family to students, it has now become a place for the citizens. It has been turned into a place for everyone. With different hats, the viewpoint changes accordingly. The Seoul Museum of Craft Art was created ‘to connect the past, present, and future of crafts’ and signals that no parking facilities were built ‘to protect underground historical relics’. What did architecture do in this place, where the limits of the site and its ruins are present and the school facilities of the five buildings are also to be used? What is the role of architecture in deciding the best form for a museum? How was this place devised with sensitivity for those who came here to meet craftsmen and everyone who came to enjoy the open place? 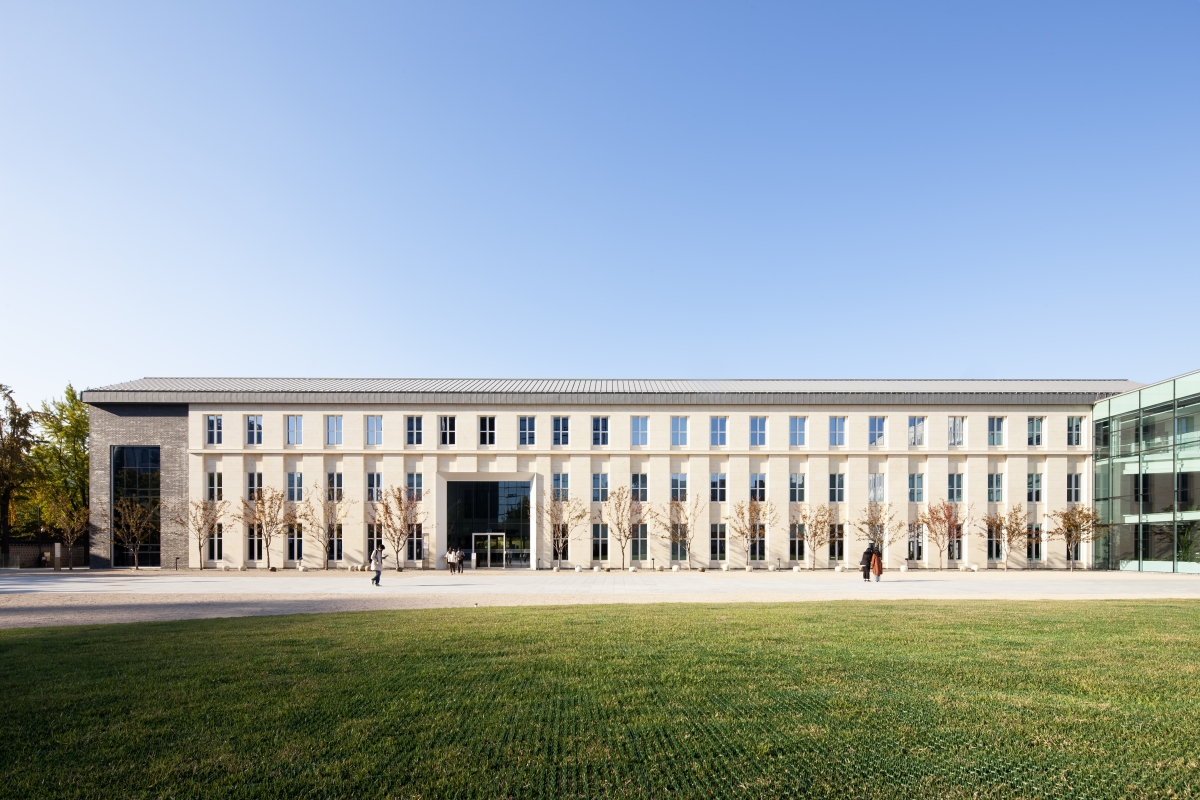 As I stood at the crossing, a mixture of times stretched away from me. Songhyeon-dong, a former USFK quarter site, a stone wall, a shopping mall, a school, Anguk building, a museum building, and a lawn. The main building of the museum, facing the crossing, reflects the sunlight and beckons you to enter. Now all sides are open and you can reach the place from anywhere. It’s unclear whether it is in the spirit of hospitality that all corners are open. People come in and out of the passageway that connects Yunboseon-gil and Gamgodang-gil. It feels as if it has always been like this, which I find interesting. A light exterior material has been employed used as if there’s nothing new to the architecture. Luxor beige marble: the stone was attached to the front of Poongmoon Girls’ High School where Andong Byeolgung was buried after taking the long journey from the Egyptian desert. The protruding wall and the 215mm indented window repeat on a 1:1 rhythm. A chunk of stone sticks in its place. A light in the crevice signals us to draw round to the front of the house in the dark. Thanks to this, people become the main characters in the front of the main building, and social media channels are full of visitors’ photos here. The area, lined with wood and thick sand on the front, is where Jeonghwadang and Gyeongyeondang of Andong Byeolgung were buried. A place to remember such traces of history. The feeling of an empty spot is refreshing rather than requiring a paved road leading to the entrance. I rustle along the way. The entrance has changed over the last few months. There are several buildings, so there’s got to be a lot of gates to go in and out; the more the better, unless the more the fuzzier. The entrances are still vying for their places. In which place can I be drenched with dazzling sunshine, in which shaded place shall I take a sip of coffee? The land was purchased, the artifacts were collected with the taxpayers’ money, so isn’t it too inconsiderate? Maybe this functions as an invitation to people those inside to an artifact exhibition, while the place everyone is free to enjoy in the way they feel most comfortable remains outside. No extra charge. To that end, wasn’t the wall torn down and the ground emptied? I was more curious about the ginkgo tree than the inside of the building. As I walked around the main building, there it was, on top of 17-layer-fringes with my shadow slightly overlapping. Well, Hello there, Monsieur! The ginkgo tree was mesmerising. Fringes from the slightly inclined lawn spread the spirit of the tree, the back of the main building is neatly organised with black bricks, and the horizontal terracotta brace of the education building set the background to the grandeur of this tree. Cubic stone walls in the distance help create a certain cosiness by embracing this space. It is a pity that it could not open up wind pathways by cutting into the main building, but it may be the reason why it survived 400 years in such a compact place. Between a will to break through and a bid to connect each other, a beautiful scene was created. When I sit on the seat of the ginkgo tree, which is 2m tall, slightly higher than the line of sight, I can see the empty land in Songhyeon-dong over the wall. I forgot that I had come to see the craft works and stayed there for a long time. Basically, to repair the house is to put it back in place. It is a place to rebuild houses, land, and other elements. The Seoul Museum of Craft Art has taken another stand to keep the hidden ginkgo trees in place. The house extension while avoiding the trees is seated, the view is widened, and the way to reach it becomes easier. Because of this, people came to this place from behind the building to meet, take pictures, and rest, and enjoy craft displays. This is a place where solutions can be found by removing the power of the architecture and following the rules of the site. But this is very difficult. The hassle of having to get rid of the desire to change an aged appearance and to maintain the original values can be unbearable. It is difficult to find compromise. 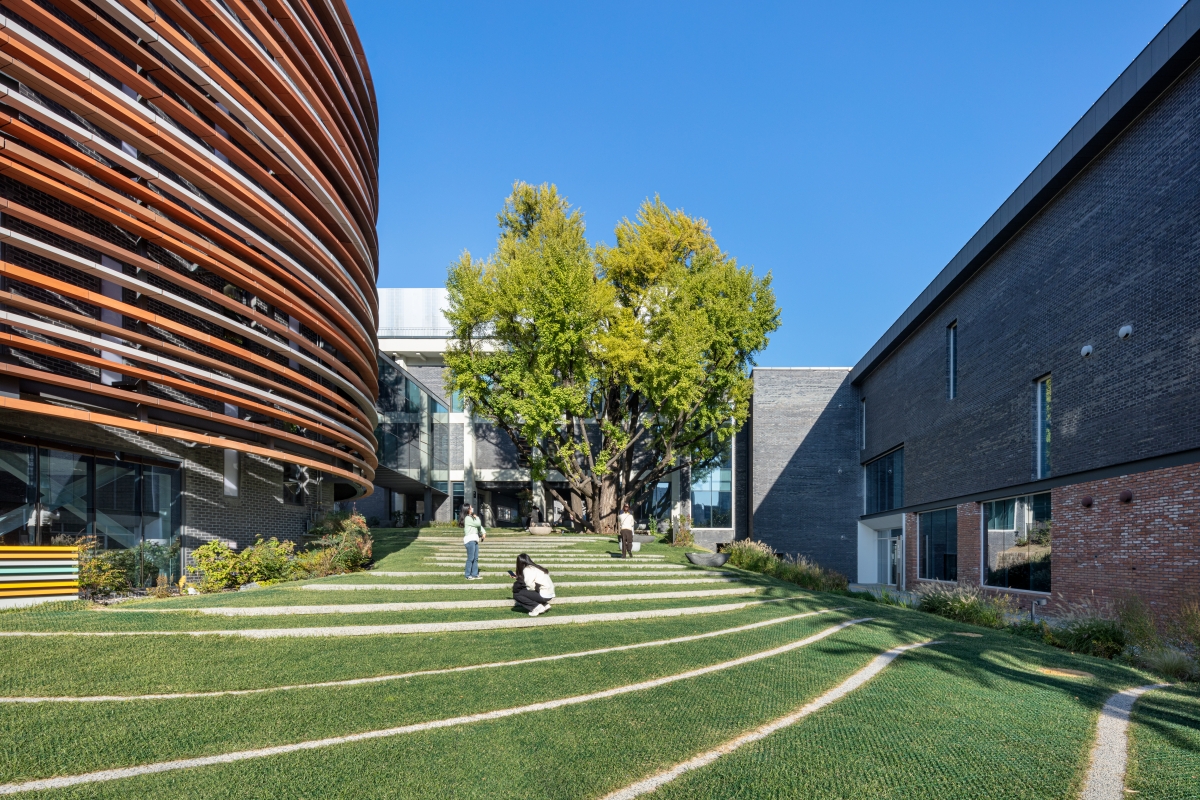 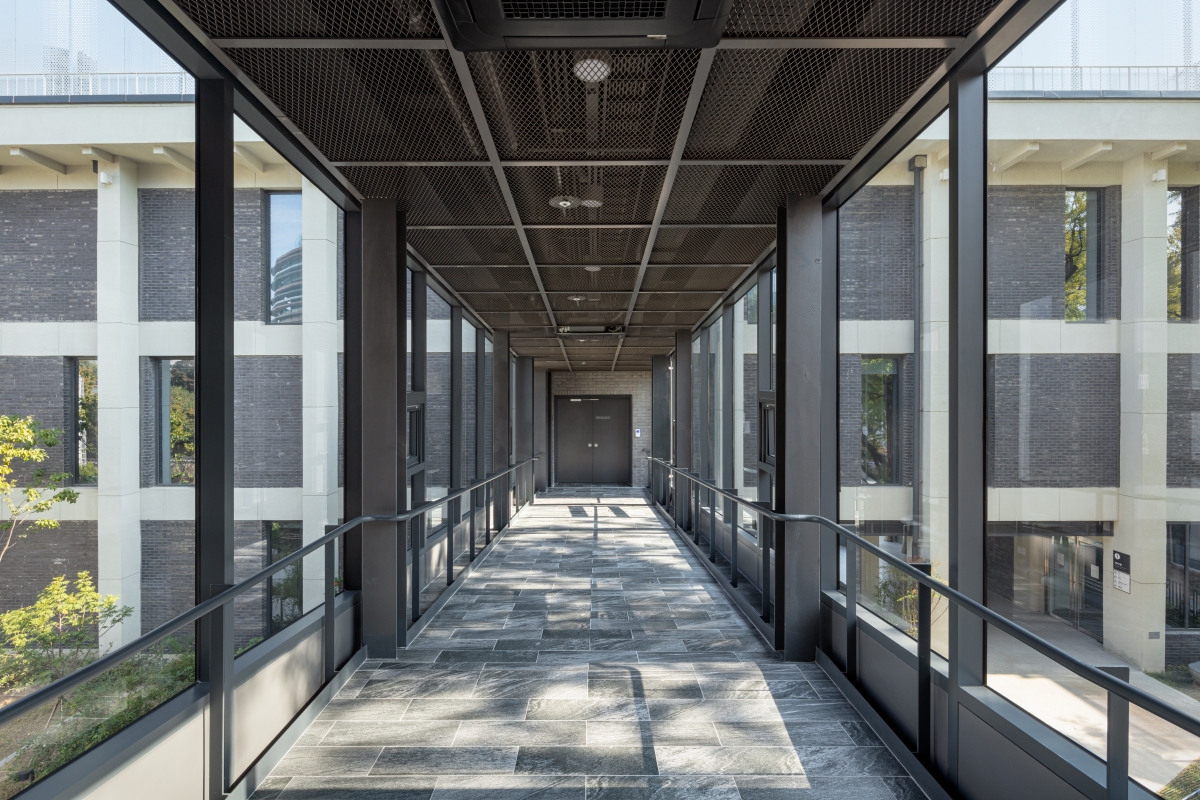 The architect’s concept of the ‘palimpsest’ and of interpretation ‘not any order’ reveals this difficulty. The new building ‘information building’, which aims to become the seed of movement, no longer serves as a guide for night roads. Instead, the gable roof, which is an attempt to revitalise the space by using wooden trusses, was also met with the demands of earthquake-resistance and abandoned ceiling spaces to facility pipes. On the contrary, artifacts have a place in every corner of the five buildings. Embroidery Bojagi bowl, porcelain, furniture, hardware, mother- of-pearl... the ideas and skills of the craftsmen have taken over the classroom and turned it into an exhibition hall. The limitations of the education building with low ceilings and many windows become the place for ‘craft’ and to establish a point of contact with visitors. Museum walls, halls, ceilings, yards, stairs, chairs, flower pots, counters, railings, lighting, and even pilot glass; these unique crafts are nestled in the converted areas and merge with the house. The house that is repaired embraces craft, and so construction was busy in finding suitable places for crafts for the people who use the land. They tear down walls, connect roads, and make large windows to find a place to rest, but the buildings maintain an attitude of doing nothing, rather than exposing itself. This seems to be the role of architecture here; it found and revealed the gaze of the hidden roof. But is the role played by architecture here sufficient? Unfortunately, in a project involving a wide stretch of land, it is a great pity that the buildings continue to stand disconnected. There are also further tasks to be performed to enrich boundaries and external use. The backyard, craft park, and the boundary of 3,880-pyeong of land are still empty. Craft here is based on everyday use, and in order to become ‘everyone’s craft, everyone’s museum’, there must be a large number of yards, roads, and contact points open to everyone at any time. I hope the turf battle ends soon. In summer, late autumn, and winter, when it became the Seoul Museum of Craft Art, the protagonist of this house was still the ‘craft’, but the protagonist rooted in place is still a ginkgo tree. Songhyeon-dong’s dream of open space and connection with it is in the near future. The Seoul Museum of Craft Art has become a new place to enjoy downtown Seoul. 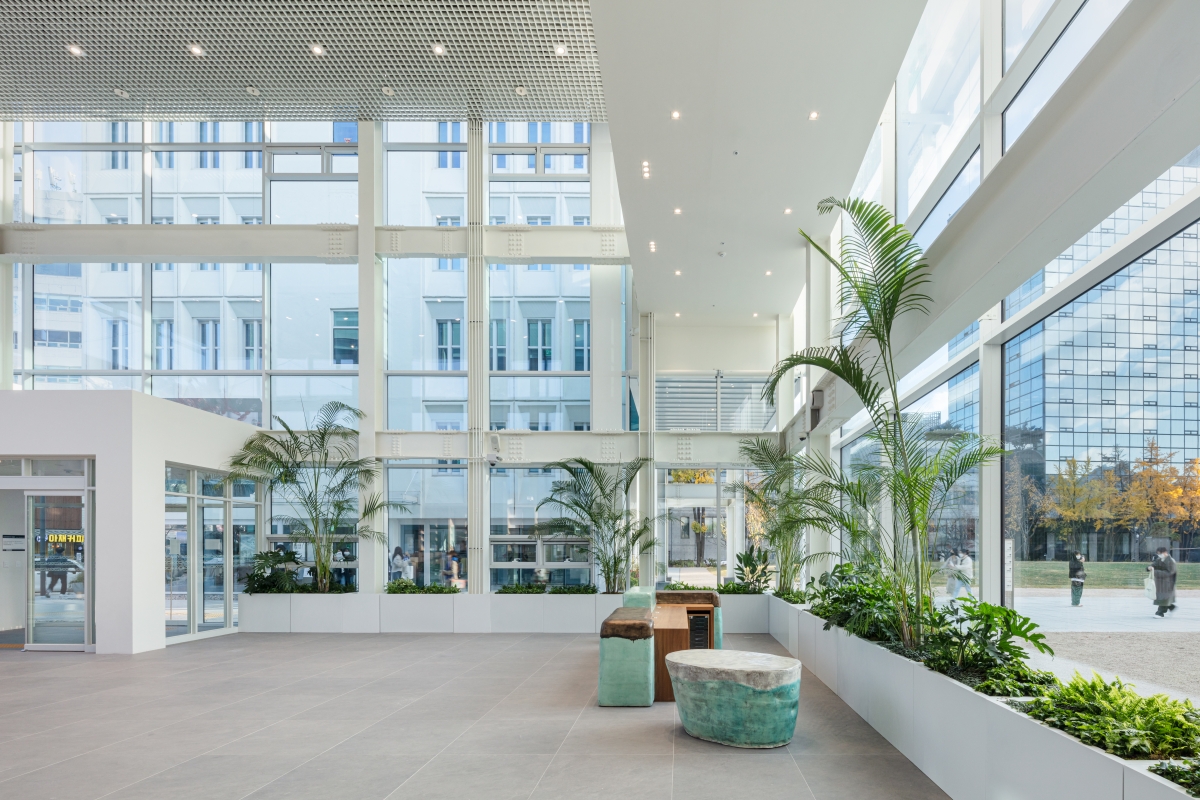 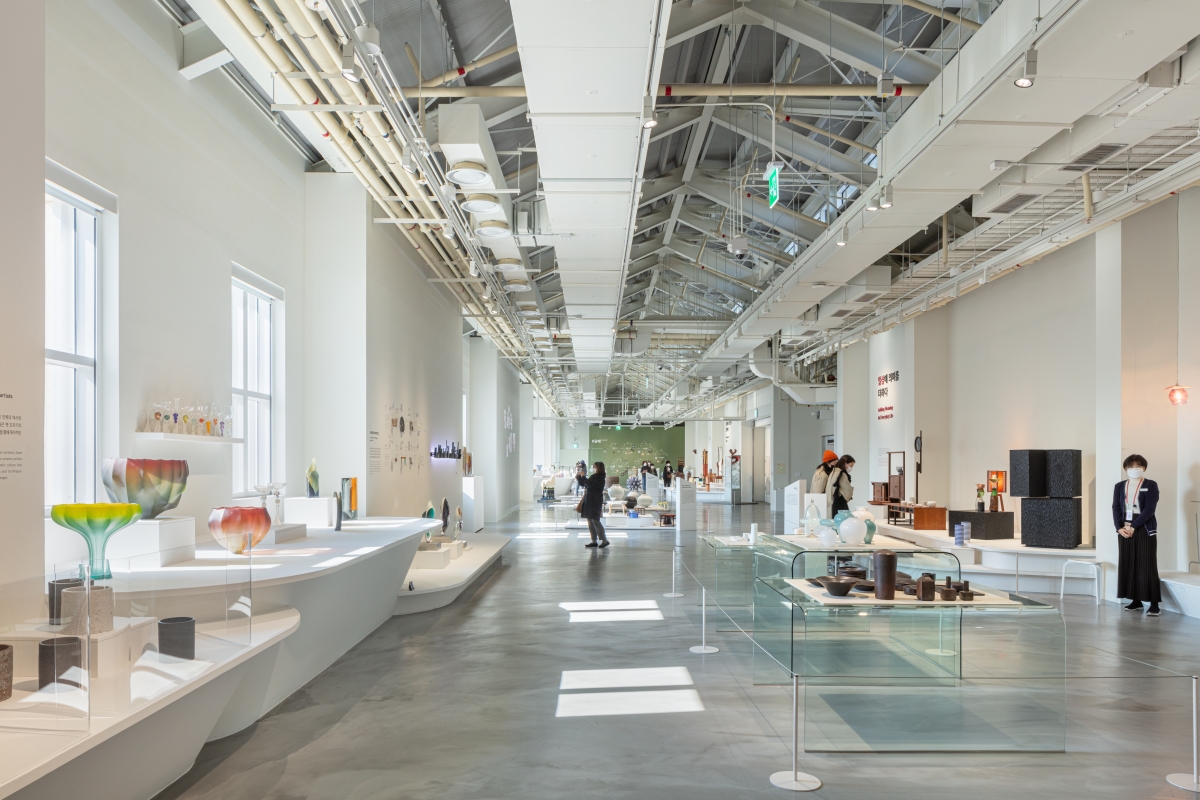 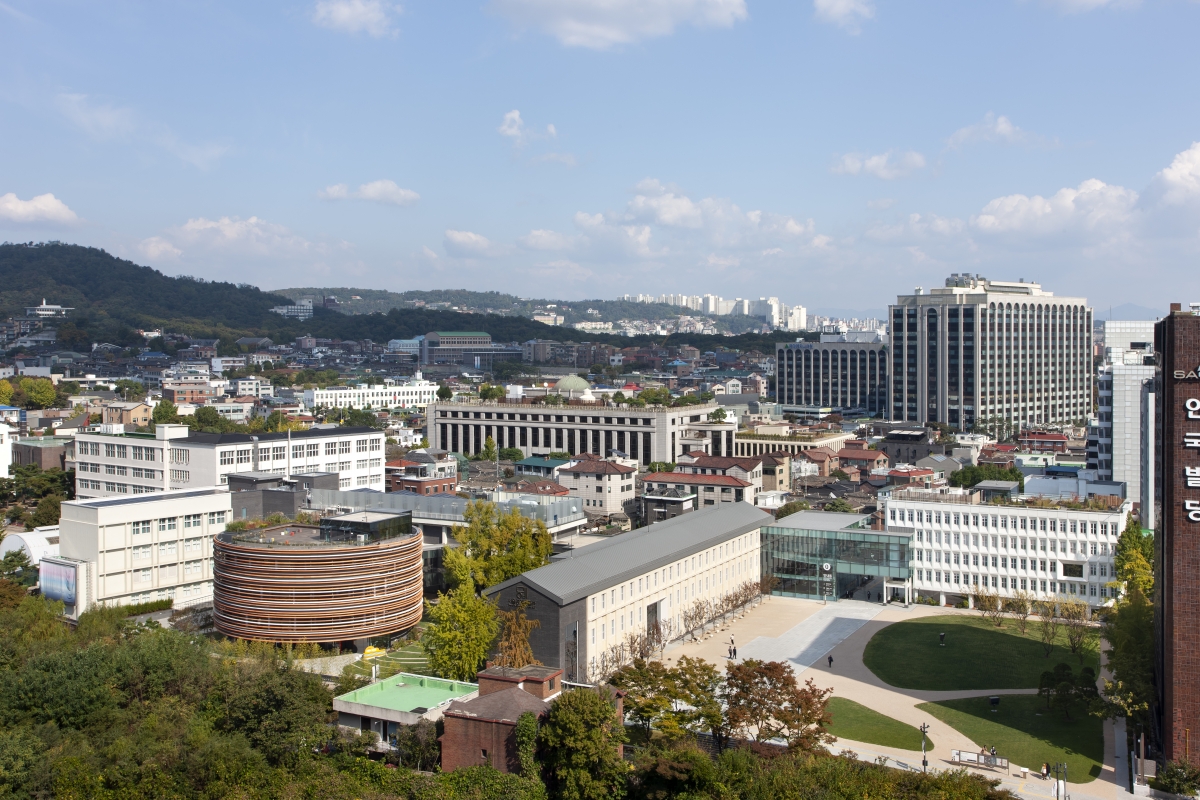 Lee Yongho
Lee Yongho is president at Haenglim Architecture & Engineering. He graduated from Hanyang University's Department of Architecture, completed his master's degree at Gachon University, obtained a doctorate in architectural engineering from Suwon University, and established the Haenglim Architecture & Engineering in 1992. Since then, it has applied its own eco-friendly design method to national advanced science facilities and public buildings such as RAON Boulevard and Pohang 4th Generation Light Source. As an outside activity, he was selected as an honorary architect by the Korea Institute of Architects and served as vice chairman of the Korea Institute of Registered Architects and the Korea Green Building Council. Other awards include commendations from the chairman of the Presidential Commission on Architecture Policy and the Ministry of Land, Infrastructure and Transport, and in 2016, he received the Presidential Commendation on Architecture Day.
Song Hayub
Song Hayub received a B.Arch from Seoul National University and a M.Arch from the University of Michigan. He was awarded a Ph.D. in Architecture from University of Pennsylvania by presenting ‘Facade-Poche: Performative Representation of Window- wall’ under Professor David Leatherbarrow’s guidance. From 2009, he has been professor at Chung-Ang University. He authored 22nd century and Landmark: City Competes and translated Surface Architecture, as well as curating the ‘Han River Empathy: Han River Imaginary Architecture Exhibition’, and ‘Han River Infratecture: Han River Imaginary Architecture Exhibition’, at the Seoul Architecture Festival 2015 ‒ 2016.
Cheon Janghwan
Cheon Janghwan is a registered architect of Massachusetts. He graduated from Yonsei University with B.S in Architectural Engineering and received M.Arch from Columbia University in New York. He worked for 5 years in New York and Boston, working on diverse projects before he started teaching at University of Nebraska-Lincoln in 2009. After teaching for 3 years at UNL, he moved back to Korea and started teaching at Kyung Hee University from 2012. He founded multi-disciplinary design firm Emer-sys and his works have been widely recognized and exhibited. To date, successes include the KIMSOOGEUN Preview Awards (2015) with Hangdong Kindergarten and Seoul Architecture Award (2016) with Godeok 119 Firehouse and Seoul Architecture Award (2021) with Yeodamjae. He is the author of the books Two Masters who changed the Contemporary Architecture (2013) and Grasshopper for Architecture (2018)
Woo Daeseung
Woo Daeseung is principal at op’us Architects. Born in Sancheong, where Ungseokbong Peak is located, Woo grew up playing in the Gyeongho River. After living in Daejeon, Jinju, Seoul, Jinhae, Woo now lives in Seoul as an urban nomad. He never went to work in design firms, and in his late twenties he obtained an architect’s license and opened an office. At the turn of the 21st century, a project was cancelled after winning a international design competition for the ‘Thousand Years Gate’ and gaining great popularity. He understands architecture and is concentrating on making a house that can be used ‘always’ and ‘well’ only when he is over 40. Thanks to the projects he completed with wonderful clients, he received numerous architectural awards. He is an architect who is interested in the joy of communication and repairing new houses. He makes his living while grasping realist principles that can be put into practice so as to practice architecture with a certain ferocity. He has written a book on the Gwangalli White Convent in Busan and the Villa Aloysio project in Mexico, and published books and maps such as Yeonhui-dong, walked by Woohyeon after settling and exploring in Yeonhui-dong.
No.650 January 2022 architecture architect Haenglim Architecture & Engineering Song Hayub Cheon Janghwan Woo Daeseung SEOUL MUSEUM OF CRAFT ART
LIST
bookmark_border
favorite_border
6