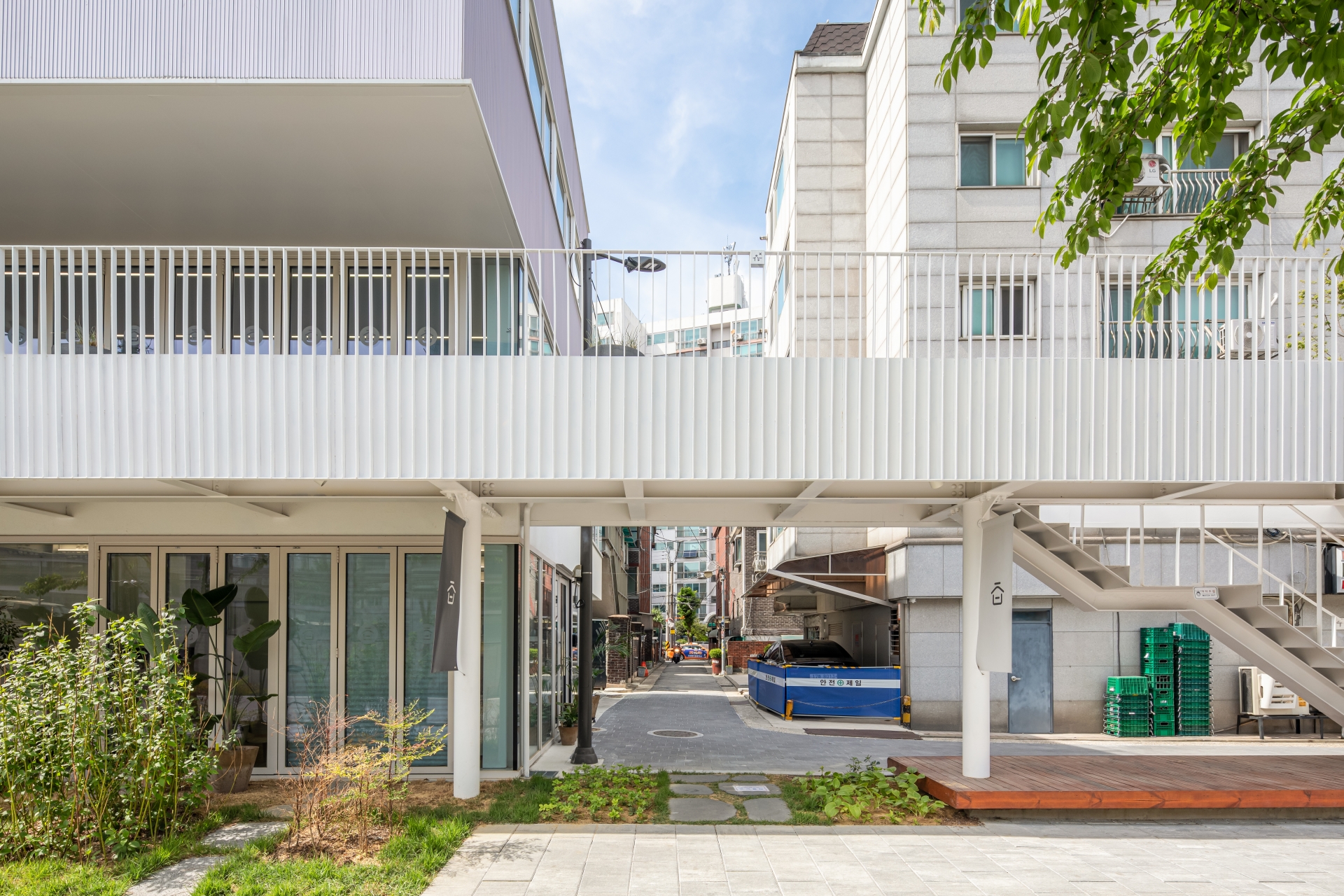 Between Limits and Delimits

Upon construction of Gyeomjae bridge that crosses Jungnangcheon stream and the following road expansion, a Community House Village was created along the Gyeomjae road. Community House Village is a conglomeration of houses, which provokes a lifestyle where the neighborhood shares communal spaces, mutual interests, and concerns and addresses them together. Using the remnant land as a result of the road extension, Myeonmok-dong Community House village and ‘Doseo-dang’ were built and 7 thematic Community Houses under the subject of books have emerged. In the middle of the road-side village is Jip-jip-Madang, which serves as a hub for community housing services. Here, Information regarding community houses is distributed and support programs that help vitalize community houses through education and consulting are conducted. 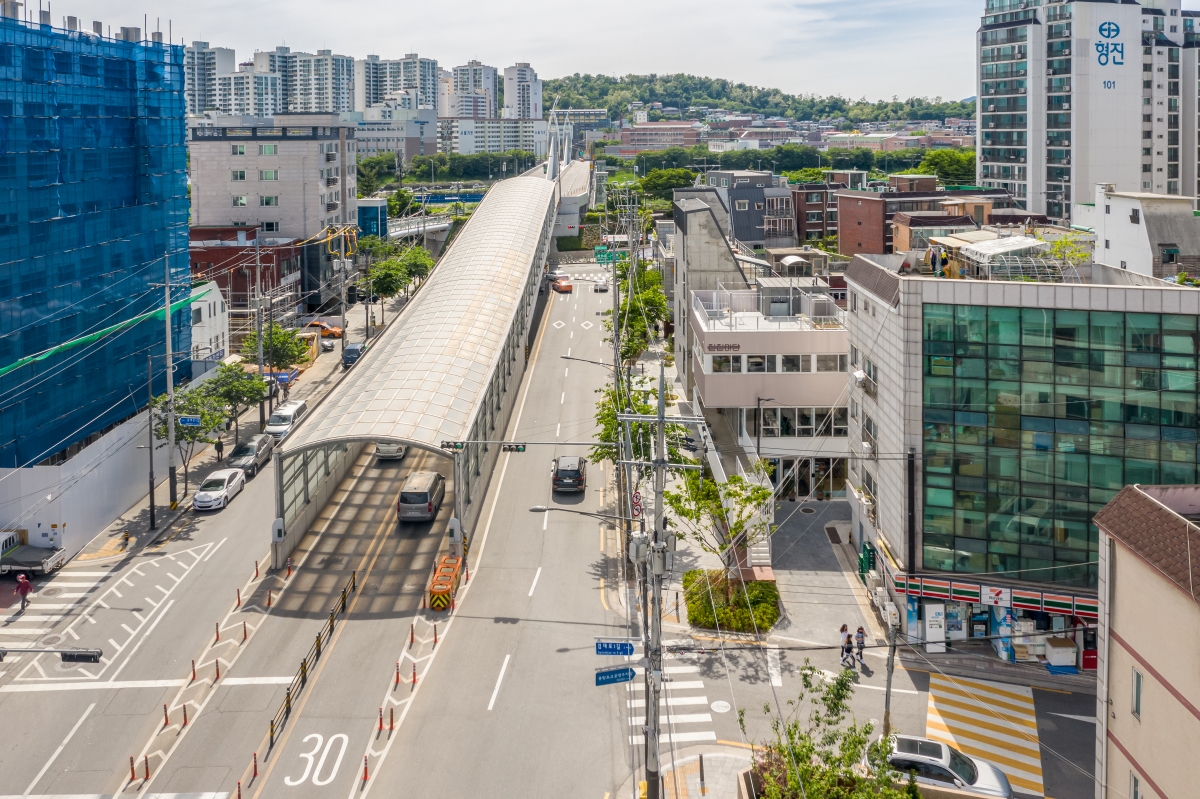 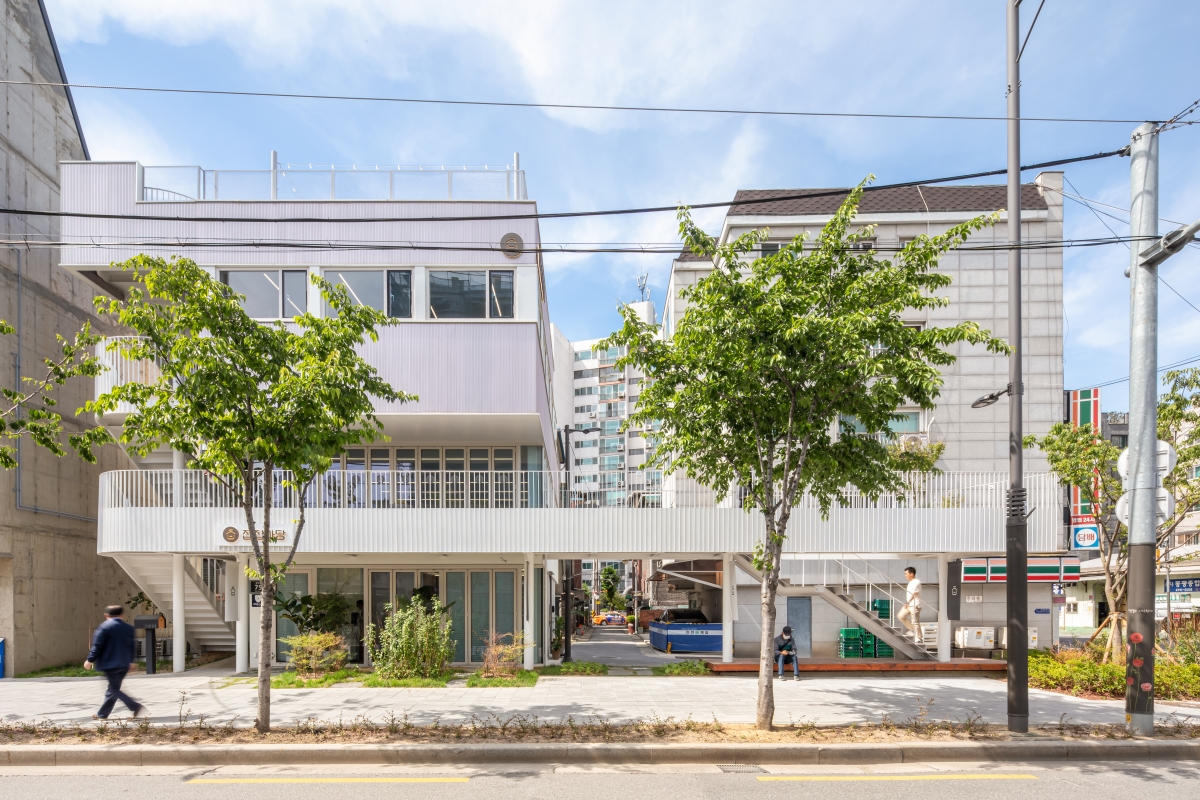 Open Space on the First Floor

There is a delicate landscape on the remnant land due to the road expansion that compensates for alienation and isolation triggered by soundproof walls installed at the overpass to Gyeomjae Bridge. Jip-Jip-Madang is located on the site that incorporates the expanded roads and the green yards between buildings that would not have contained ‘facade’ quality before. The architect wisely utilized the alienated land to fulfill the role of architecture as a public property. Steps that directly access the second floor were elongated from the main mass of the building in such a narrow and lengthy site that might hinder the space planning. This multidimensional street named ‘Yeoyu-ro’ preserves the existing street’s atmosphere by revealing the street that was hidden for a long time. The interior of the first floor which consists of small but open lounge space and the library is extended to a narrow space which is created below the ‘Yeoyu-ro’ of the second floor, and the intent of the architect are demonstrated well regarding the usage of the exterior on the first floor in addition to the landscape and the flat bench which is for the resting. Though some of the houses are still vacant, vibrant walking is envisioned along with multipurpose communal spaces of the adjacent community houses. Both the interior and the exterior of the first floor that pairs well with the bus stop next to the Jip-Jip-Madang resemble any typical welcoming bus stops in the rural area where neighbors spend their time together. 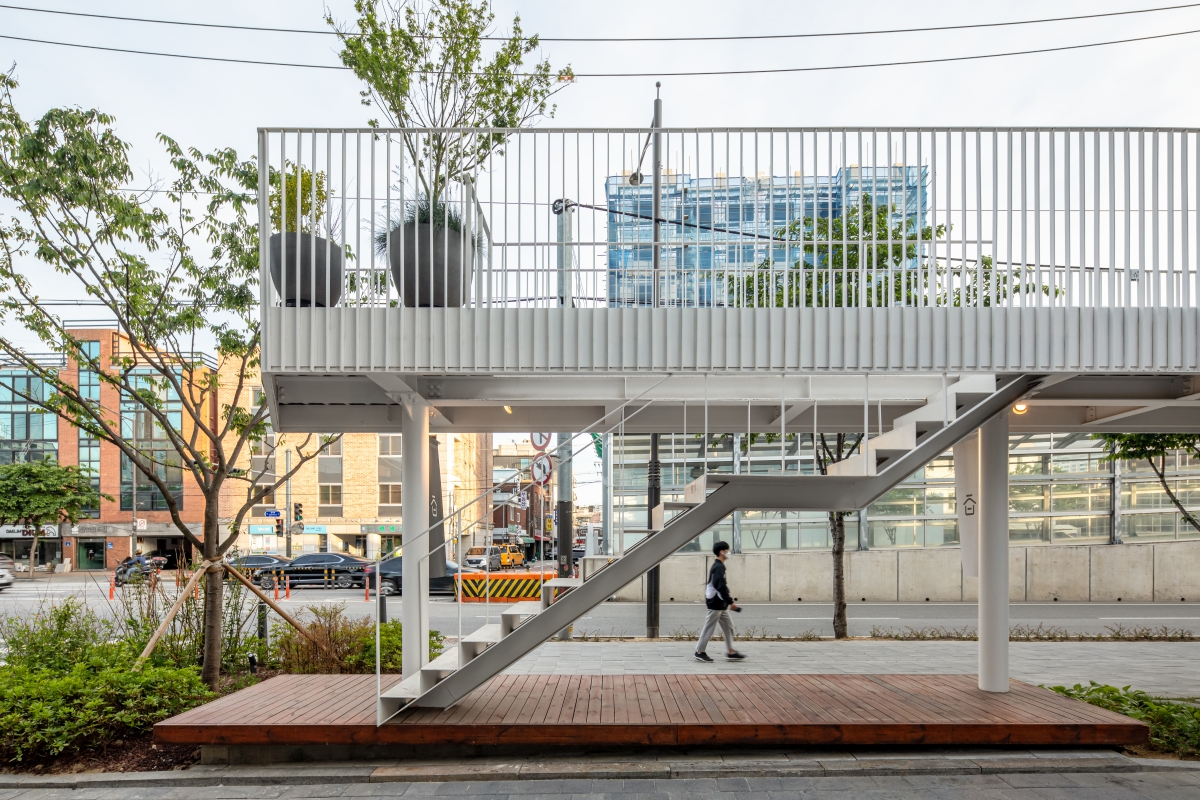 The multidimensional streets that connect with the second floor and the exposed steps define the most of the facade and represent the public characteristics of the building. On the second floor is a support facility such as an education room, and on the 3rd floor is a workspace. The floor plan is designed compact and neat, performing the maximum utilization on the small land. The education room on the second floor has more potential as it looks over the street. The education room serves as an open space that expands through an outdoor balcony, and it becomes a stage and the audience seats rather than merely an ‘education room’ amid the contrast between urban views both front and back by an extended balcony and ‘Yeoyu-ro’. Greenhouse on the third floor which is currently used as a consultation room and the resting area due to insufficient workspace casts a doubt that it is excluded from the public access as it pairs well with the open facade of the building. The access through outdoor steps and elevator are open to everybody. The roof garden of the top floor which is connected by the steps is designed to accommodate the neighbors. The farming plot and a small water fountain are ready to use f

or the interactions with neighbors if the COVID situation which has lasted for the past 2 years is getting mitigated. Although it is on top of the 3-story-building which is not the highest, it presents not only the diverse urban elements and the colorful visual experience including the view of Gyeomjae Bridge that is connected with a 6-lane road and Jungnangcheon stream that flows under the bridge. 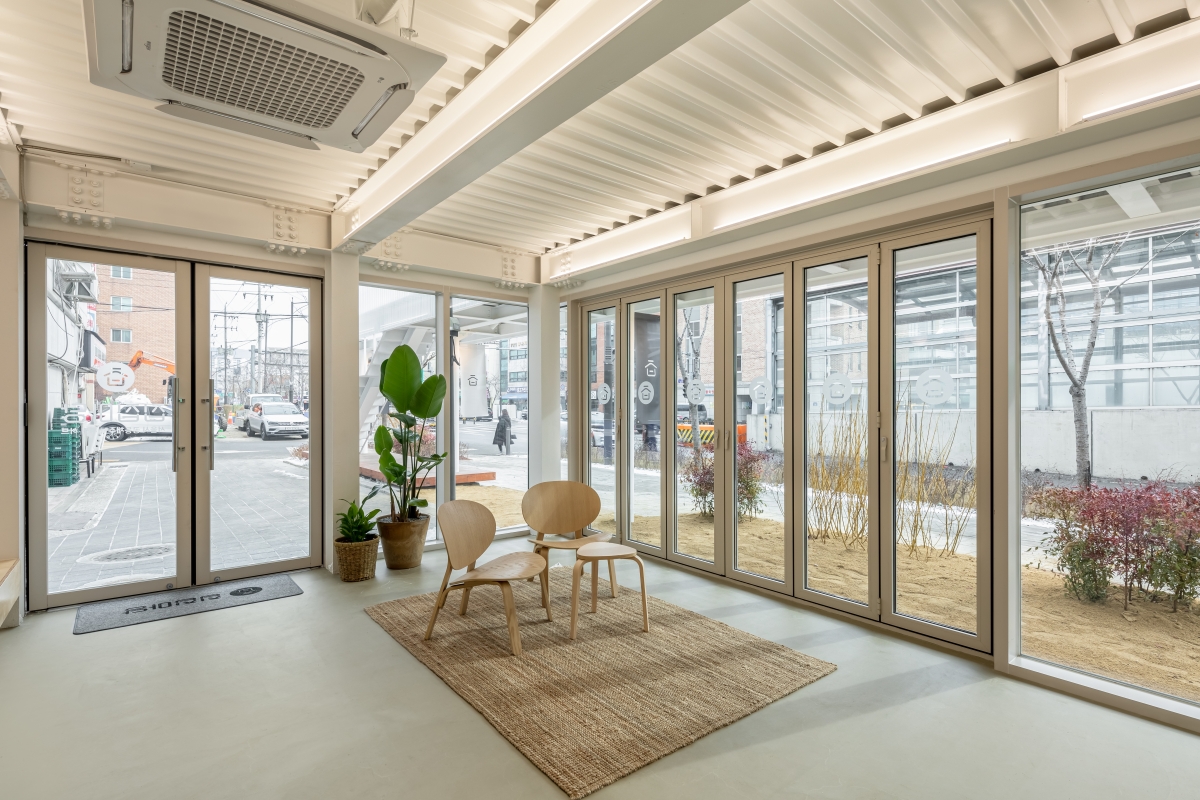 ​Use of materials and structures

Among the buildings with familiar grey bricks and masonry materials along the Gyeomjae-ro, Jip-jip-Madang stands out bright and upbeat. The architect’s intent to create an open space is backed by a steel structure for a relatively small architecture with a total area of 290m2, revealing more than other RC buildings. Among the dominant style of concrete walls and the rectangular openings (whether it is for residential or neighborhood facilities), it uses articulate language. Rhythmic changes from vertical materials and vertically constructed aluminum that supports the railings of the steps make them tangible with rhythms, and the opening and the closing of the building harmonize with the mass of the building. In a public project with a small budget and the lowest bid system, it is common to experience mediocre finish in the construction phase unlike the plan or the intent of the architect. Nonetheless, Jip-jip-Madang presents a high-quality finish. It is presumed to be the culmination among balancing amidst the tug of war between the reality found on the project execution and the quality, the efforts and the commitment they invested during the supervision, skin-tight collaboration with the contractor etcetera. 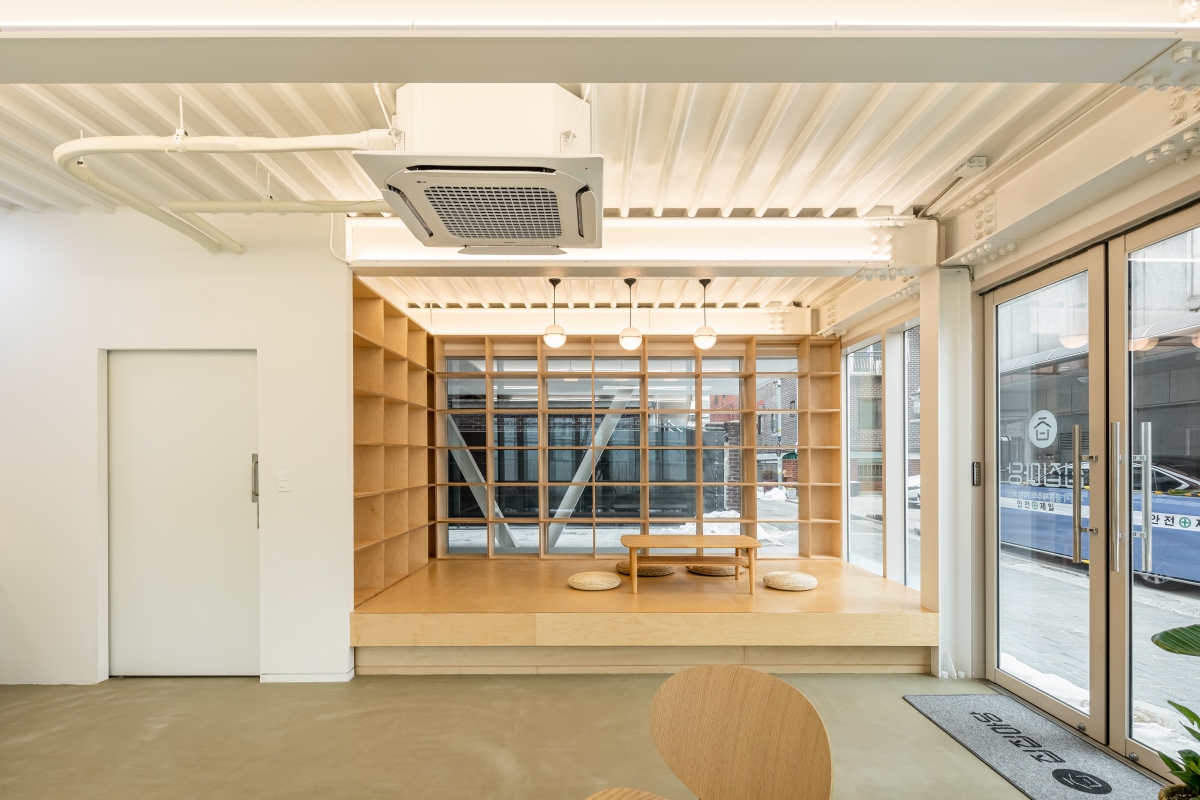 Exposed steps and supplementary steps that provide direct access to other floors are becoming common in recent public architectural plans. Some jokingly say that the project can not win unless they have the exposed steps that provide direct access to the other floors. It is concerned that the formal approach may be fixed as it becomes an indicator that can show publicity with easy accessibility in public architecture plans. The main program of the support hub consists of a workspace on the third floor and an education room on the second floor. Although the workspace on the 3rd floor is close to a private area and the education room on the 2nd floor is a space used by many, public flexibility is not the same as the lounge on the 1st floor considering the time of use and the size of the number of people. In the use of the program except for the first floor, the meaning of 'public' is relatively small as a place for creating trivial yet daily communities where unspecified people naturally meet and part.

The architect's proposal seems to have more public in mind than the actual use of this building as a support hub. Perhaps the gap between the practical use of the support hub users and the architect's ideal proposal has resulted in the sub-title of 'Flexible Space'. It is the architect's choice to propose a space that is more flexible than the given conditions and limitations, and it seems that the process of finding a solution and contemplation as a type of program that the support hub has would not have been easy in such a small site. However, since flexibility is the answer to all public buildings, the spectrum of buildings to be planned in the name of 'public' is wide.

Amidst the contrast between the nature of public architecture and the functions required by the programs, the most poignant space that shows the public quality of this project is well represented in the wooden bench that we meet at the ground level, which not only connects the hidden urban organization and new roads, but also the hidden alleys and the atmosphere it pulls through a linear frame that allows sharing of trivial everyday life. If it was the result of capitalism in the private sector based on the rationality of function and economy, it probably would not be happening. Ain’t it this scene, created by careful planning and consideration of the site and its surrounding urban context, that we expect from public architecture.​ (written by Lim Mijung / edited by Park Semi)

Shin Sungjin, Son Kyungmin
Shin Sungjin and Son Kyungmin co-principals the bold architects. After graduating from University of Seoul, they worked together at O.C.A. 'The four Houses for Brothers & Sisters', 'Zipzipmadang' won Seoul Architecture Award and Korean Architecture Award and 'Munsan-eup Community Center in Jinju' won the Korea Wood Design Awards. They are working on projects such as 'Yeongju parking building', and 'Dream playstructure', 'Myongseok-myeon Complex Culture Center'.
Lim Mijung
Lim Mijung is an assistant professor at Hongik University and a principal of stpmj Architecture. After graduating with B.S from Yonsei University, she received her B.Arch from Rhode Island School of Design and M.Arch from Harvard Graduate School of Design. She is registered Architect in NY and Korea and is a winner of Young Architects + Designers from Architectural League of New York 2012, a winner of AIA New Practices New York 2016 and a Korean Young Architects of 2016.
LIST
bookmark_border
favorite_border
6