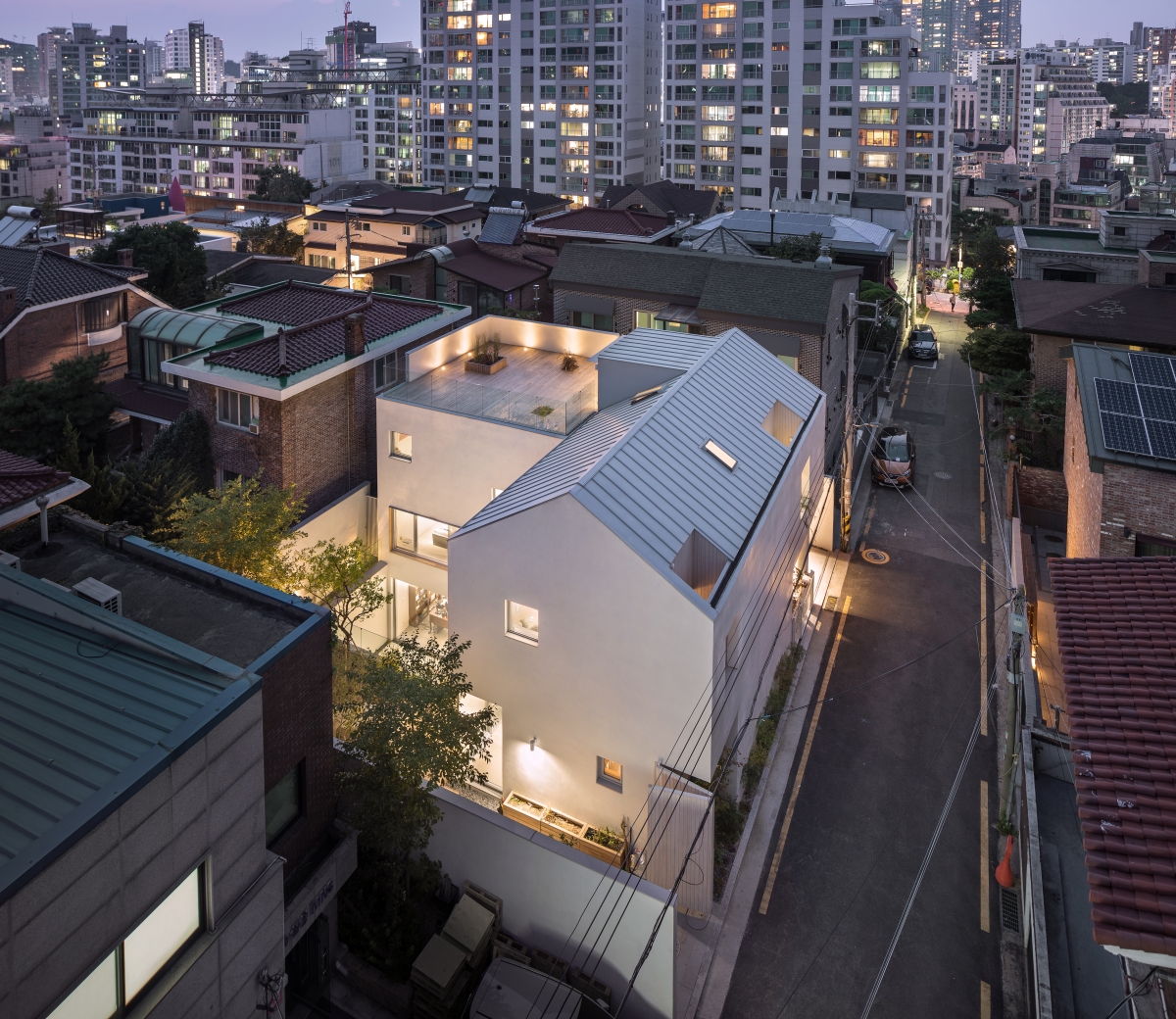 The present name Seocho-dong originates from its previous names ‘Seoripuli’ and ‘Sangcho-ri’ which were given due to the abundance of wild seoripul common to the region. It is said that the meandering water that flows down from Umyeonsan Mountain used to travel eastward towards Seoul National University of Education to Gyeongbu Expressway―and the construction site is in this vicinity. The surrounding hills and its inward focus within the block protected the site from the recent waves of redevelopment, and the town, composed of old detached houses, has a calm and quiet atmosphere. A house might be the smallest constituting unit of a city, but it is also a small city and a universe of its own. To explain the idea, the client brought cardboard models for each floor to our first meeting, which formed something resembling a horizontally-positioned and vertically-piled up block. In the model, a lifestyle that clearly stands out from life thus far – that is, a lifestyle that respects the personal spaces of her husband, her son, and herself-could be found. The design process was guided by the decision to divide the spaces between each family member and to adjust the density of the relationships between them. There is no living room to function as the centre of the house. The dining room – which also doubles as the reception room – is the only shared space, and the remaining space has been repurposed into a hall for listening to music and performance, a study, and other uses. These spaces, that are either connected or disconnected, are positioned and piled above one another to create a house, and in this way the house has become a constitutive unit of a town. The house is positioned towards the southwest in a L-shape to protect the inside from the street. The tall walls at the south and west create the impression and function of a courtyard house. Upon opening the folding door by the south garden, one is led outside to the street. The façade that forms a boundary with the road creates a closed outlook, but the wooden wall and small garden at the retreated façade imply the style of the interior and thus invigorates the street. 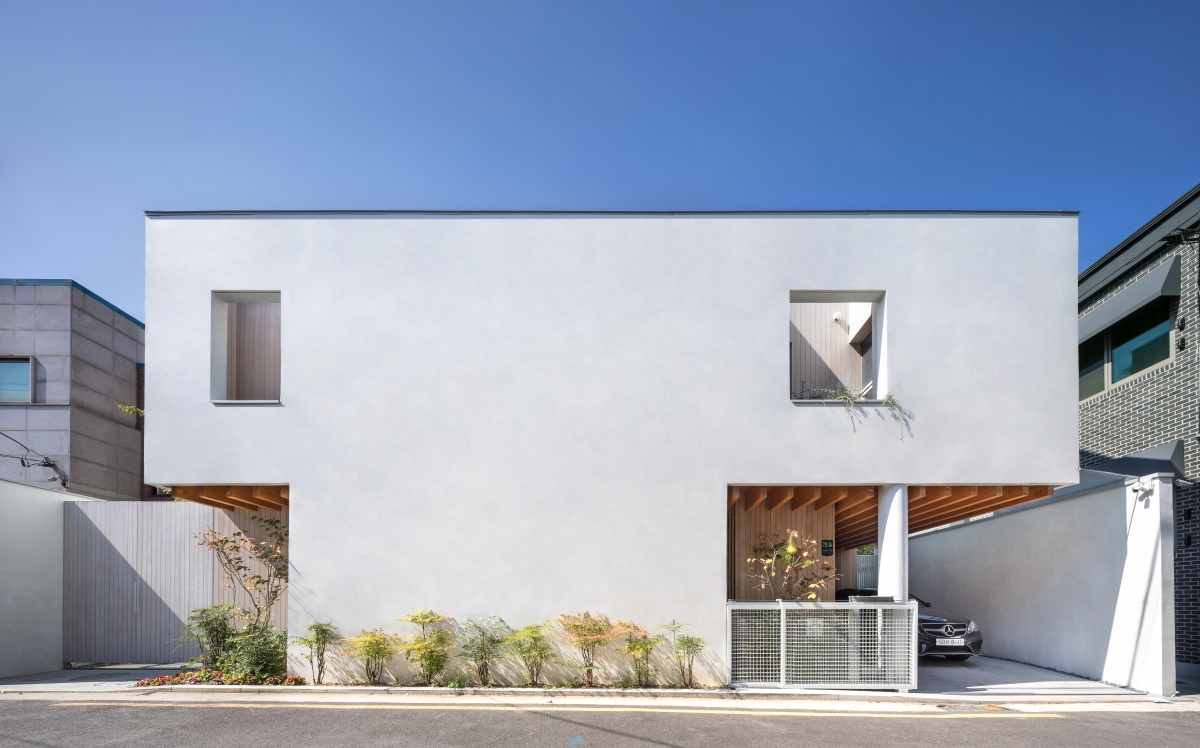 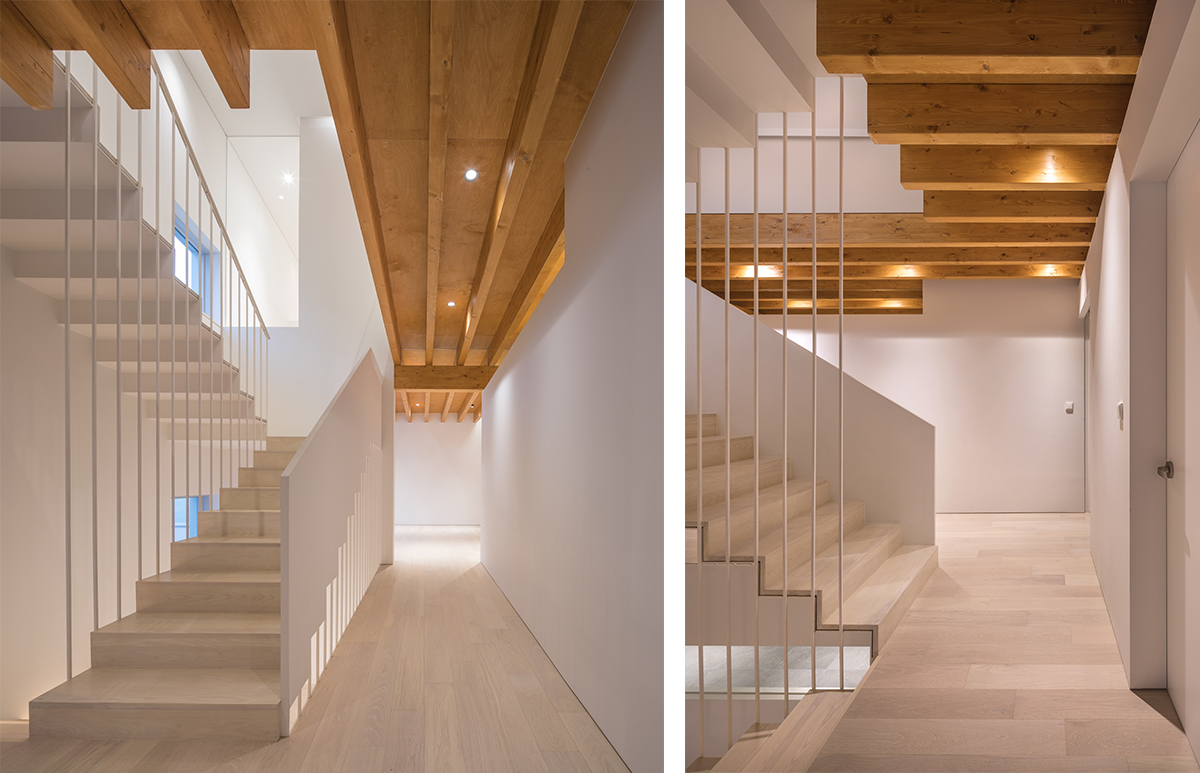 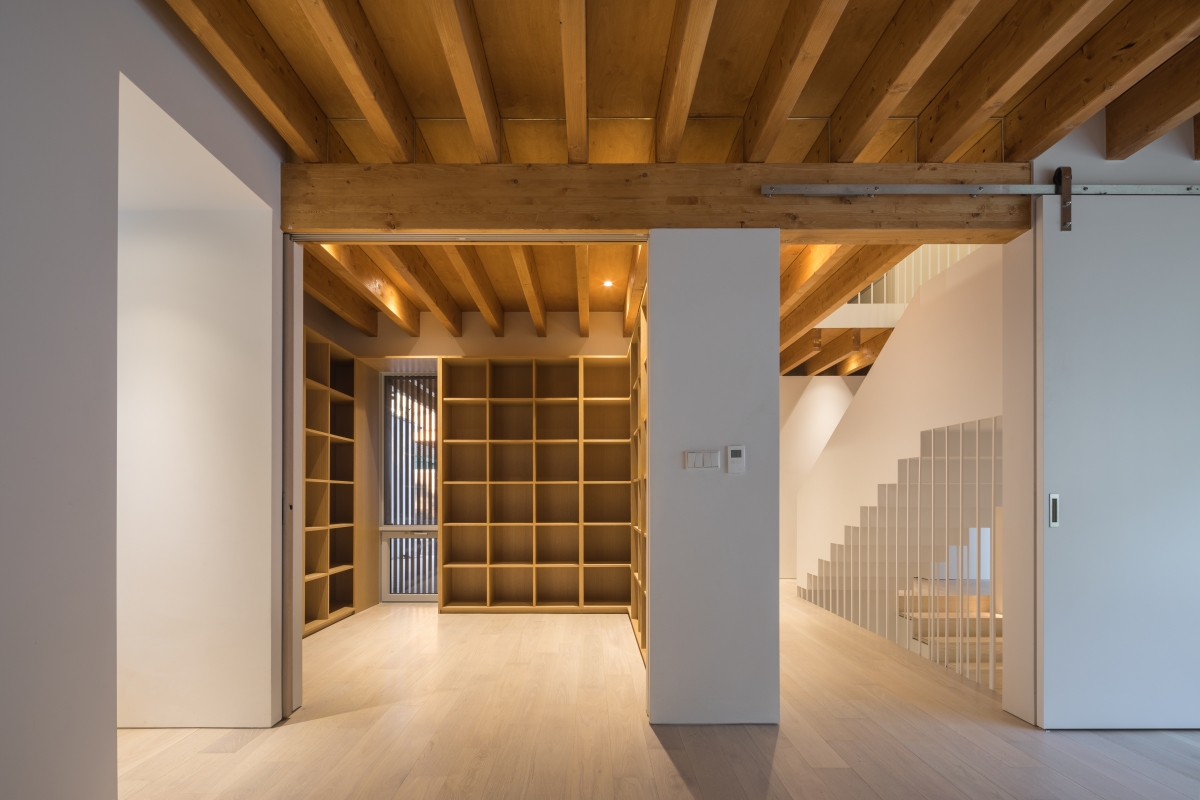 The piled-up block layout can be rearranged anytime like pieces of a puzzle. While realising the characteristics of the current programme, we also suggested a construction method that would be flexible towards potential modifications in the future. Seoripul Tree House is a hybrid architecture that integrates a reinforced concrete structure with wood construction by composing a wood construction within a two-storey high reinforced concrete structural volume with a ETFE (Ethylene Tetra fluoro Ethylene) finish. The wood construction is composed of the heavy timber joist that forms the floor slab on the second floor and the light-frame construction wall. The long line that continues from the outer wall to the opposite outer wall functions as the foundation for the free plan. While the light-frame construction walls of the first and second floors were composed to match the current purpose, they can always be removed and repurposed at will as they are not part of the structural body itself. There is freedom in terms of changing the cross-sections as well as the floor plan according to the user’s intentions. With its variable spatial structure, this hybrid space allows one to experience the sense of spatiality intrinsic to a wood construction. (written by Cho Namho / edited by Bang Yukyung) 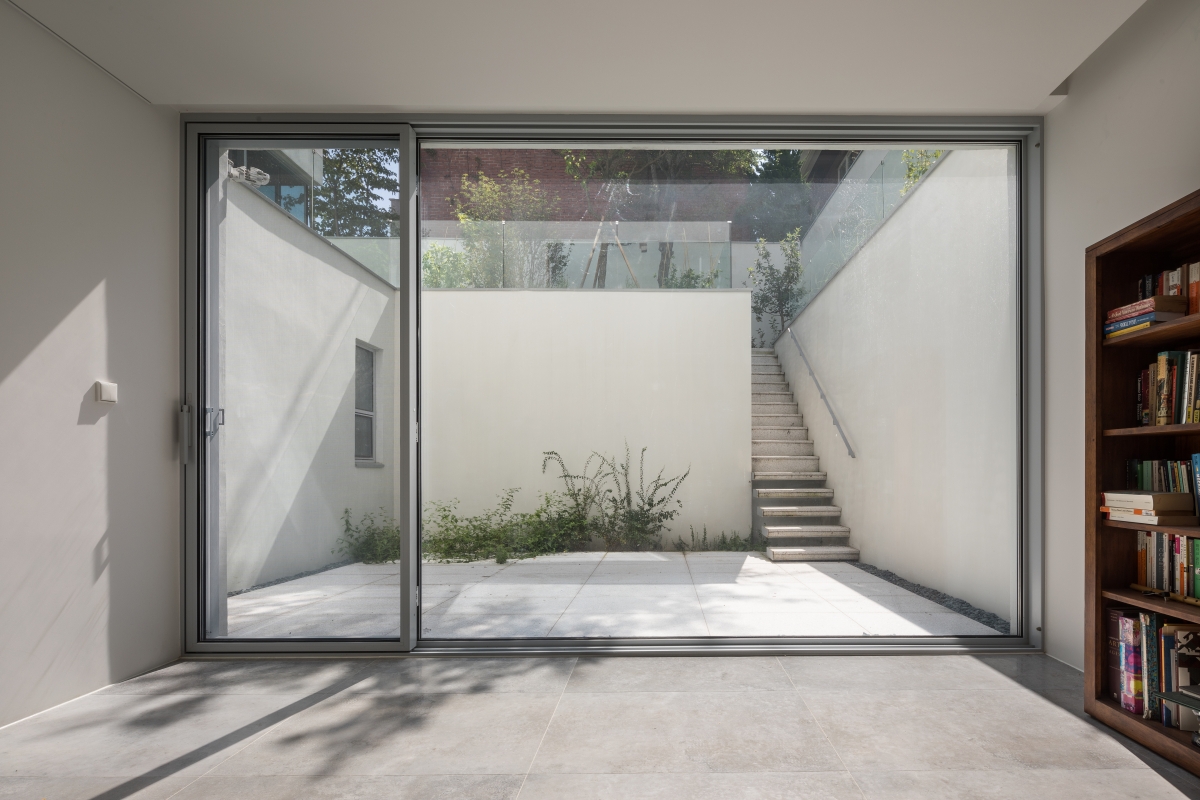 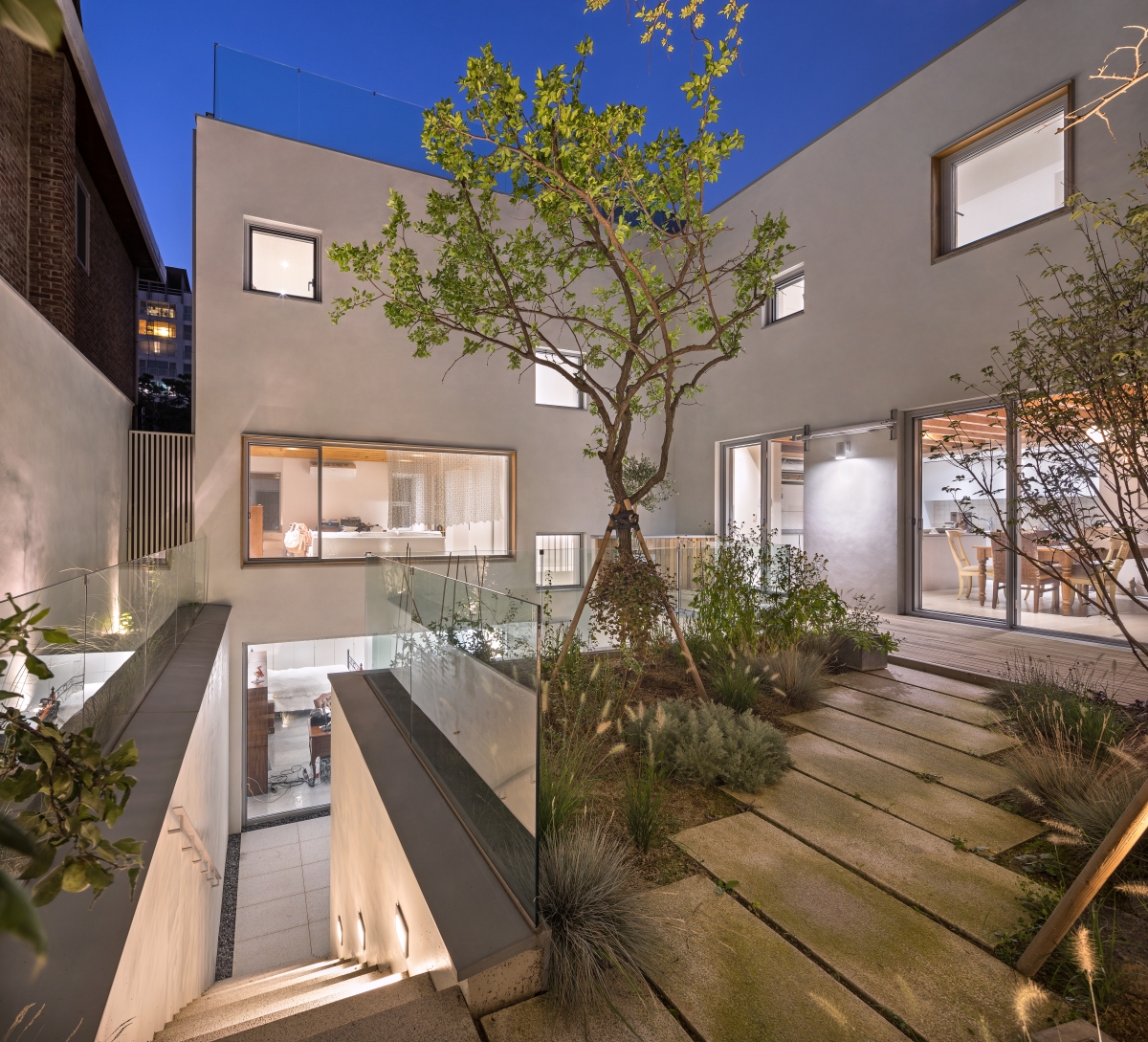 Cho Namho
Cho Namho is a principal of Soltozibin Architects. He has lectured at the University of Seoul and Seoul National University for many years. Along with various activities in the architecture field, he has been contemplating the relationship between architecture and society for a long time. Soltozibin Architects learns from historical precedents and moves toward creating a new type of architecture. He is a member of the Architectural Policy of Seoul, and a vice president of the Korean Institute of Architects (KIA). He has received Korean Architecture Award Grand Prize, KIA .
Award (four times), Seoul Architecture Award Grand Prize and ARCASIA Awards Gold Medal.