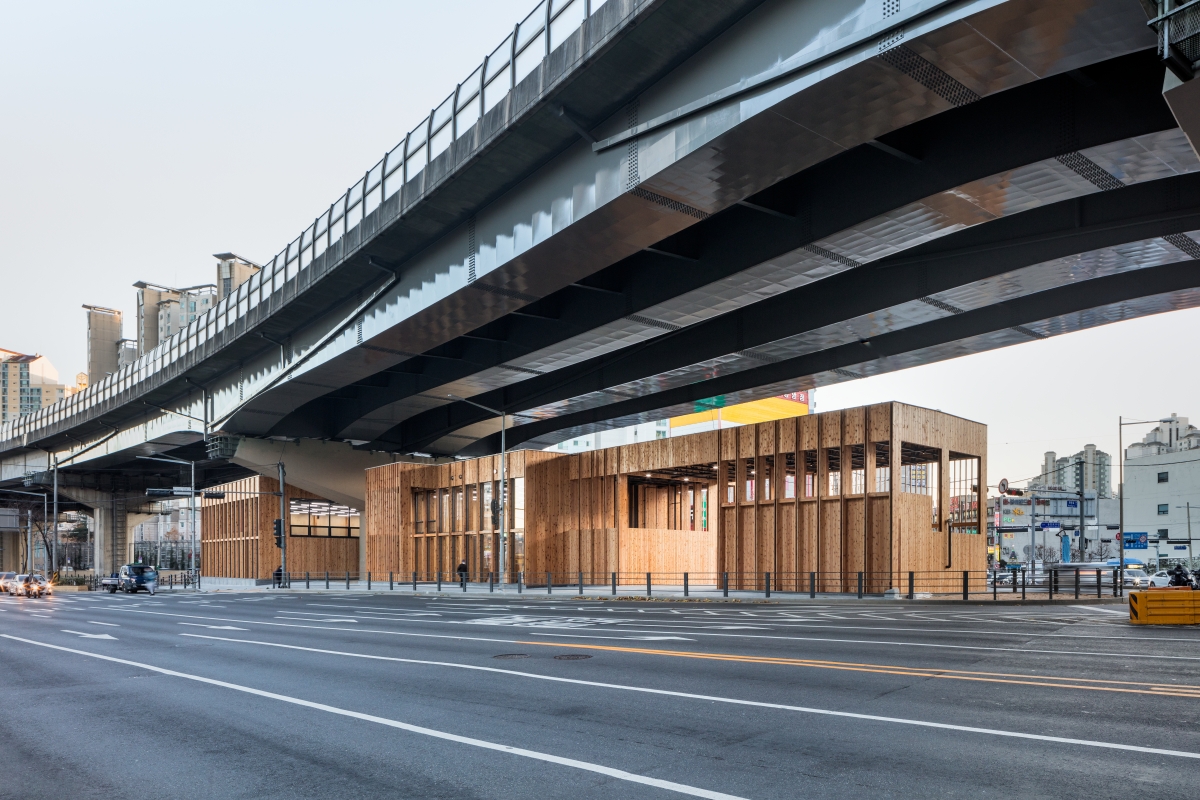 ​The Space Beneath Overpasses Which Was in Need of Improvement

Infrastructure such as railways and bridges, which encouraged rapid economic development in Seoul, was often built with inadequate attention to the surrounding urban context and environment. Traces of this inattention can be found throughout the city, and one of them remains the spaces beneath overpasses. The space beneath overpasses is generally neglected or used as a site for dumping rubbish or parking your car, ruining the aesthetics of the city and presenting issues to public safety and crime prevention. In 2017, Seoul Metropolitan Government promoted a development plan to expand social infrastructure and local community facilities by making use of the spaces beneath overpasses. Six pilot project sites were selected, and the space beneath Jongam-dong Overpass was implemented as part of the projects.

A Traffic Island That Could Not Stay Long

The abandoned space under the Jongam-dong Overpass is surrounded by 15 to 20m-wide roads. This is a section if highway that is habitually congested due to its location as an intersection between the two expressways. The three towns near to the site are home to large residential complexes and educational facilities, but they have a relative shortage of public space such as parks and green spaces. There is the Jeongneungcheon Stream with its path running alongside on the eastern part of the site. However, due to poor maintenance, it is filled with putrid odours, ruining the overall atmosphere. This is why visitors rarely stay long, despite the significant pedestrian flow between the commercial area of the western block. Therefore, the newly constructed facility was proposed to serve as a community​ space and shelter to resolve these issues and harmonise with the surrounding areas.

The site, connecting two pedestrian crossings of awkward configuration, is connected to the pedestrian ramp leading to the Jeongneungcheon Stream. If it is well-maintained, it serves as a fruitful space through which to connect this continual flow of pedestrians. So the existing decking and central fountain – which used to block the access circulation in three directions – were removed, and a building of segmented form was positioned there. We hoped that if the spaces between these masses could act as public pathways, then people would spontaneously enter the buildings and socialise with their neighbours. Located on the inside, the creative yard and shelter were also planned as part of public pathways, so that people could either open the door as needed to use those places as semi-exterior spaces or expanded interior spaces.

A Space That Transforms According to the Programme

The segmented masses have their own given programmes within the limited spaces between the roads, but they also have the potential to flexibly change their programmes based on the diverse needs of users. Among them, a multi-purpose cultural space was planned as an area in which to host leisure activities and events, such as exercise classes, performances, and lectures, whereas a community space was planned as an area to hold relatively static events such as pilates, exhibitions, and small gatherings. Folding doors were installed between the creative yard, multi-purpose cultural space, and community space, so that the in-between space can be freely expanded and divided.

A Form That Protects the Interior

Each column of the structure was planned to be a different size and spacing, according to the characteristics of the interior space. The corridor that also serves as a resting space was separated by inserting walls connected to the structure. While the entire structure made of wood visually serves as a shield from the exterior view, the glass windows, doors, and wooden louvers that fill the in-between space create open visual communication between the interior and exterior while managing the noisy exterior environment. The roof that covers the building is finished with translucent polycarbonate, to prevent pigeon droppings entering the space and also to let the sunlight in.

Repetition of a Steel Structure and a Wooden Structure

The steel and wooden structures that form the structural system of the building surround the flanks and upper part of the building to produce a stable form. Built in the north-south direction, the structure takes a form of steel structure with red cedar added to both sides, displaying a keen structural aesthetics while highlighting the warm ambiance that is peculiar to wood. The red cedar panel finish on the exterior of the building also penetrate the inside and envelope the main structural parts, creating a warm atmosphere with the birch plywood installed on the interior walls. By counterbalancing the cold feeling of the steel frame, seen through gaps between the repeated boards, we strived to rejuvenate the dark and desolate atmosphere so often encountered beneath an overpass.​ 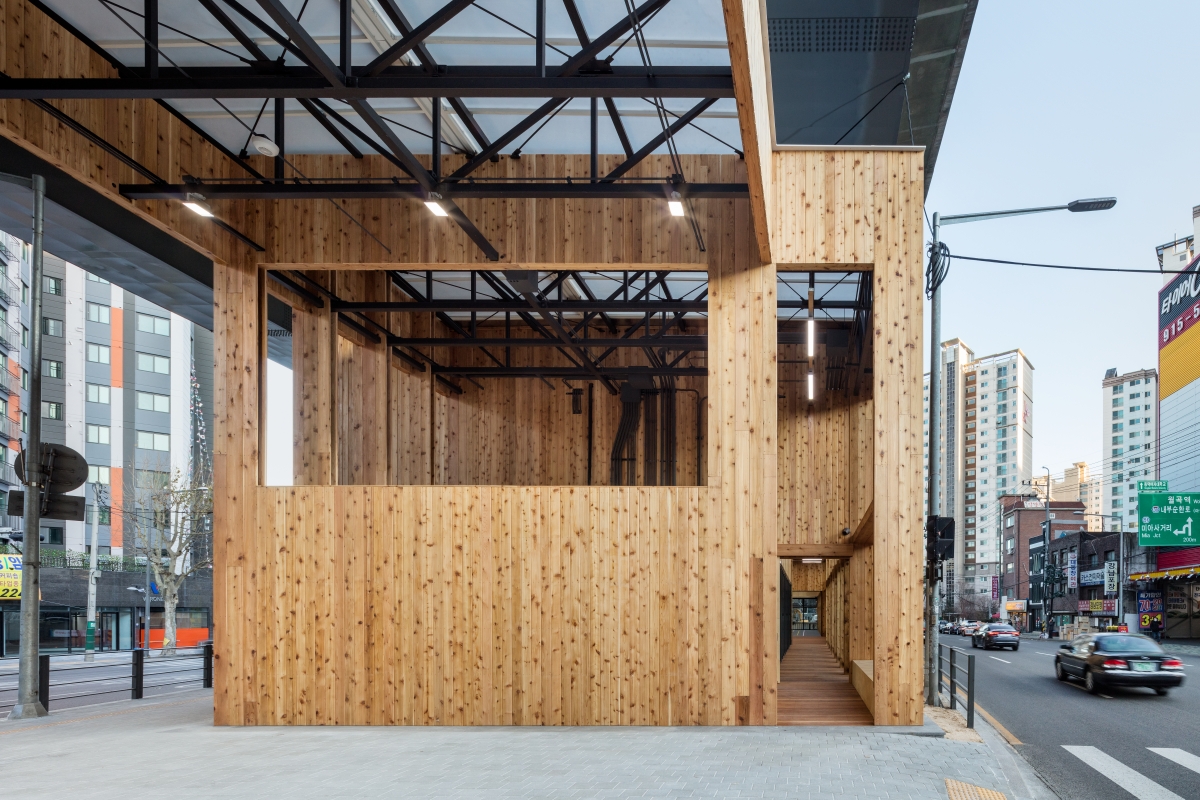 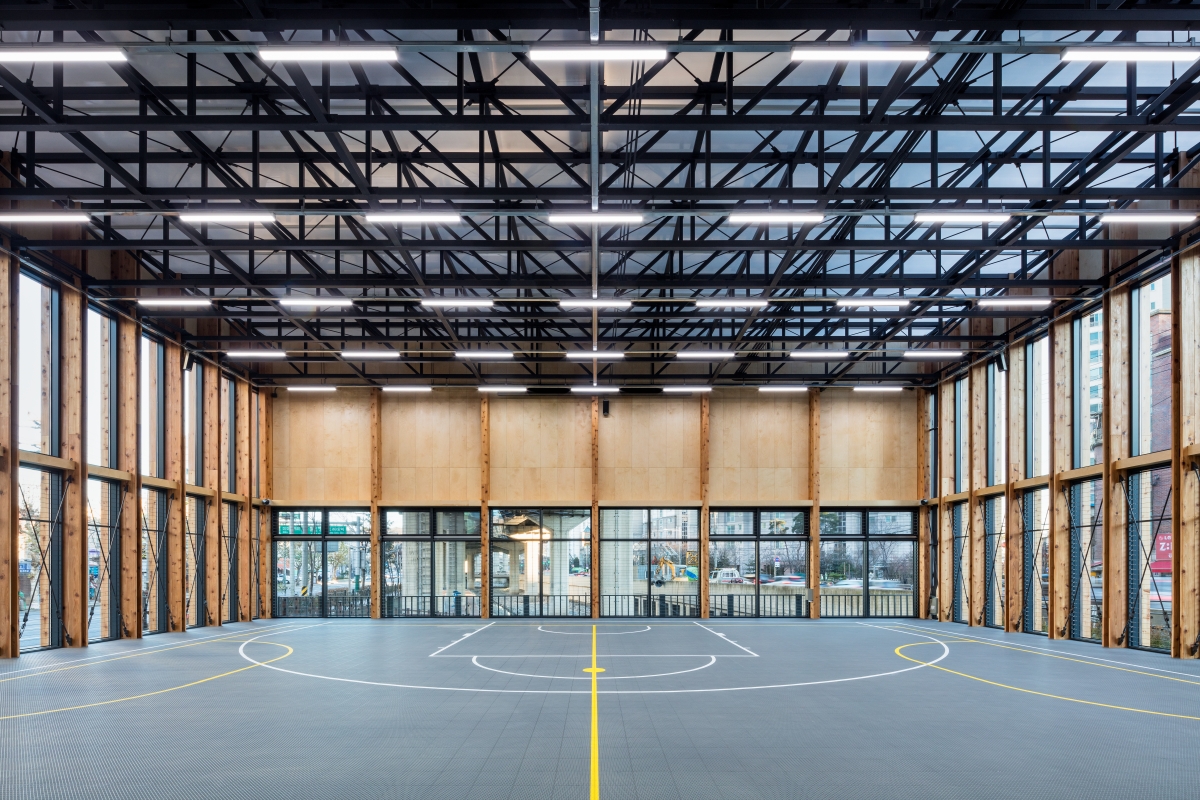 Park Chungwhan
Park Chungwhan is a co-principal of Simplex Architecture as well as a professor at Hongik University. He received his Master of Architecture from Harvard University in 2011 and holds a Bachelor of Science in Architectural Engineering from Seoul National University. He began his professional career working at Mass Studies in Seoul, where he gained experience in a wide range of projects. He continued his career at Richard Meier & Partners and Asymptote Architecture, leading the design effort on Seamarq Hotel, Vitrvm Residential Towers, and ZIL Tower as a Project Architect. He is a registered architect in New York and a member of the American Institute of Architects as well as a LEED accredited professional, and Public Architect of Seoul Metropolitan Government.
Song Sanghun
Song Sanghun is a co-principal of Simplex Architecture. He received his Bachelor of Architecture from University of Seoul. He has held primary roles on a wide range of projects including Pangyo Nature Center, Crystal County Club House in various firms in Seoul, Korea, as a Project Architect. He is interested in a wide range of design field including urban design, architecture, and landscape architecture. He is a registered architect in Korea, and a member of the Korea Institute of Registered Architects.
No.644 July 2021 Simplex Architecture Park Chungwhan Song Sanghun Jongamdong overpass Jongam Square Jeongneungcheon public space exercise facility wood
LIST
bookmark_border
favorite_border
2