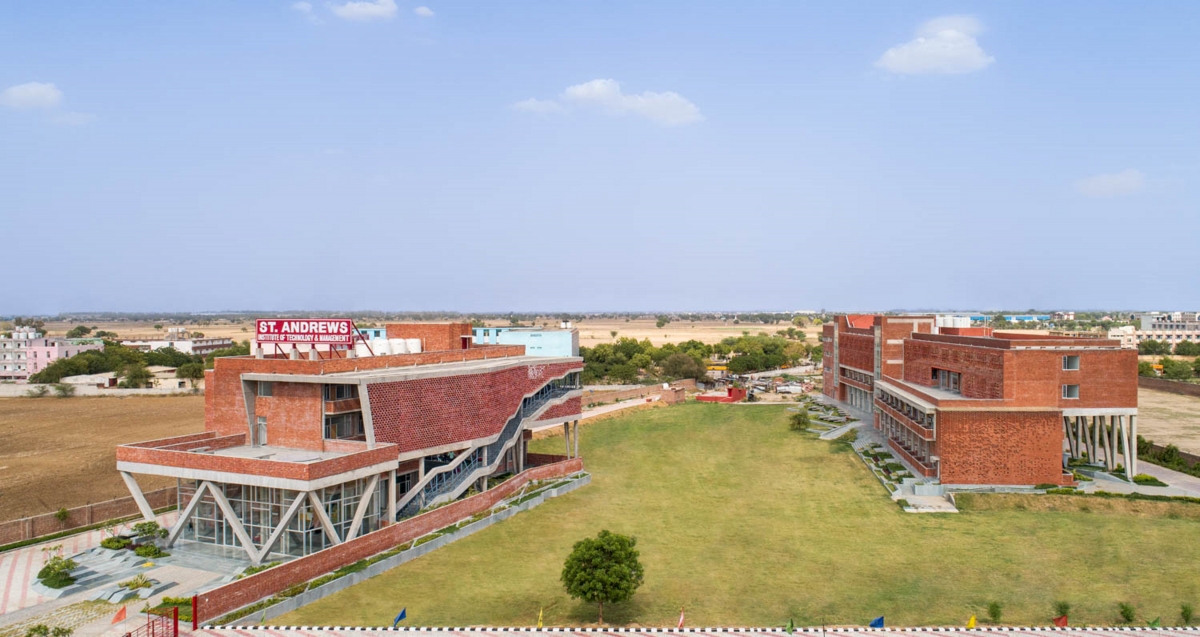 Bang Yukyung (Bang): This project is a domitory for a university in Gurugram, a satellite city to Delhi in northern India. After completing the Boys Hostel Block in 2017, Zero Energy Design Lab (ZED Lab) also carried out design of the Girls Hostel Block. What did you focus on when you designed in this project?

Sachin Rastogi (Rastogi): The primary design challenge was to create a secure hub for the girls—a campus within a campus that would fit into the urban master plan of a university campus that did not restrict movement, while establishing a connection with the outdoors. The hostel was expected to be home to approximately 130 students, with dorm rooms spread across four levels in addition to hosting ancillary spaces like a pantry, and recreational areas as well as social spaces.

Bang: Describing the strategic setting of this project, you emphasised its role as a ‘hub that can unite both internal and external spaces’ by comparing it to a work of urban planning. How did you apply this concept?

Rastogi: The layout incorporates a mix of indoor and outdoor spaces that connect physically and visually at different levels to enhance interaction and social activities. The students have been given the freedom to create their own space in a safe environment, without any imposed restrictions.Adaptive layering dictates spatial planning within the building and gives rise to varying social encounters. The indoor lounge at the heart of the building creates an intimate environment for studying or conversation. From the core of the building towards the outdoor, the next transition is the third-floor terrace along the building’s west façade that attracts students in the mornings and late evenings in the summer and serves as an all-day space in which to congregate during the winter​.​

Bang: The south stairway forms a distinctive space in terms of scale and its visual appearance. What was its function and how did it affect the overall design of the building?

Rastogi: The subsequent transitional zone at the heart of the building is a stairway, aesthetically incorporated into the south façade, connecting all of the floors. The design of the building is kept simple while identifying essential elements like the staircases as hubs for social interaction. The stairway manifests as the fundamental social nucleus that is home to all activities, from large-scale celebrations and events to quick informal conversations. Transitional and circulation spaces such as bridges open into lounges and pause points to create room for socialising and group study.

Bang: As your company’s name implies, your works have long focused on ‘zero energy design’. How did you address the issue in this project?

Rastogi: The Girls Hostel Block is a prime example of sustainability through its energy efficient design. While the façade is one of central elements that can be attributed to the building’s energy-efficient design, the hierarchical spatial planning and focus on transitional spaces are also key considerations that strive towards zero-energy design.The design seeks to reinterpret conventional standards of human comfort by introducing the idea of adaptive comfort—the principle that people experience comfort differently and adapt, to a certain extent, to a variety of indoor conditions, depending on their clothing, their activity and general physical condition. The building unfolds as a series of multidimensional spaces, arranged in a hierarchical order through the method of adaptive layering. As students move from the interior of the building into the open, they experience distinct transitions in varying thermal environments. The transitions begin from the interior lounge at the core and unfold into spaces such as the terrace, stairway, bridges, corridors and smaller lounges, each serving as intimate pockets for studying, conversation or activity. Further, the landscape strategy brings greenery inside, creating a cool micro-climate through the effects of evaporative cooling and shading, lowering the demand on mechanical ventilation, thus conserving energy. 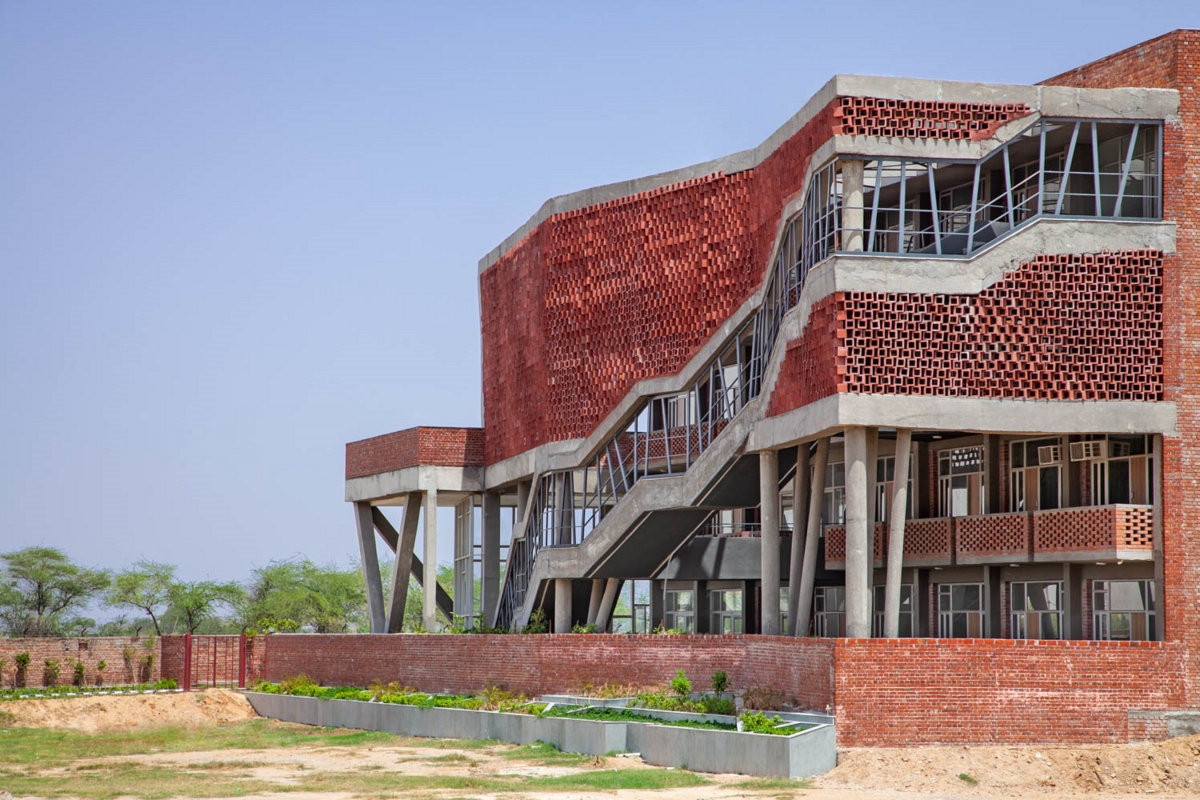 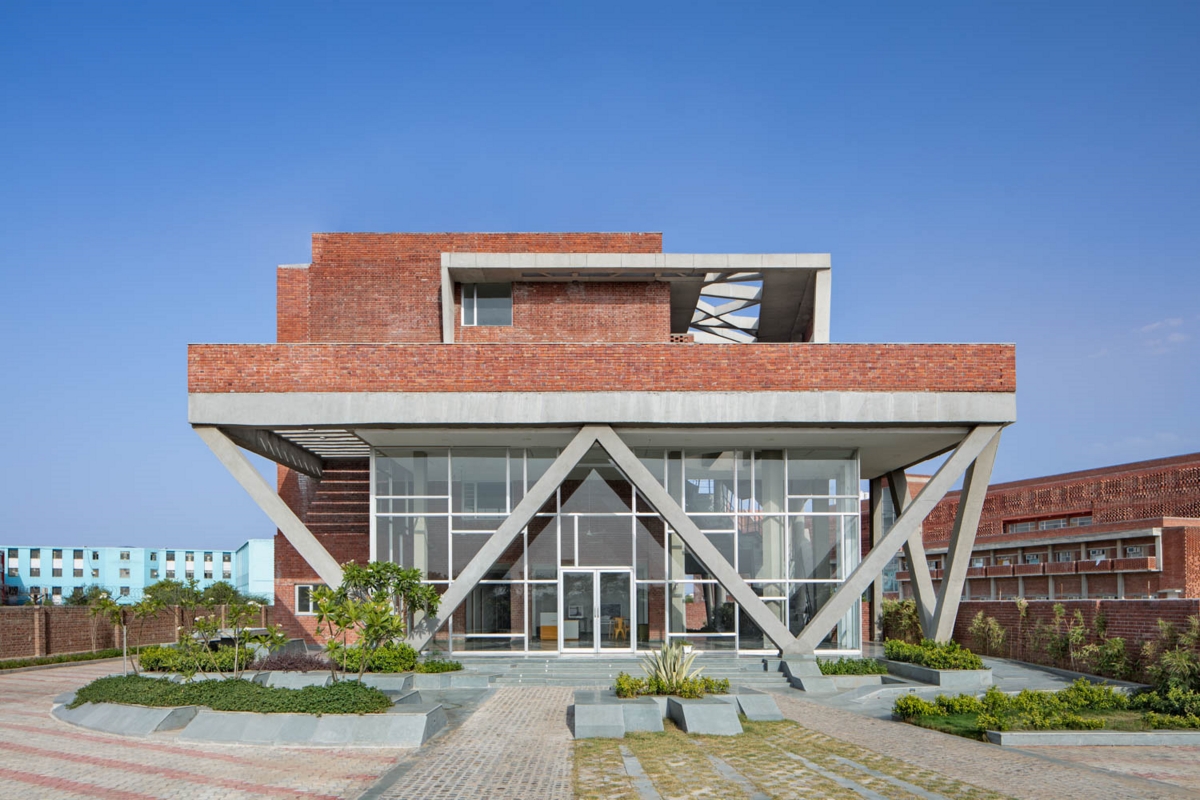 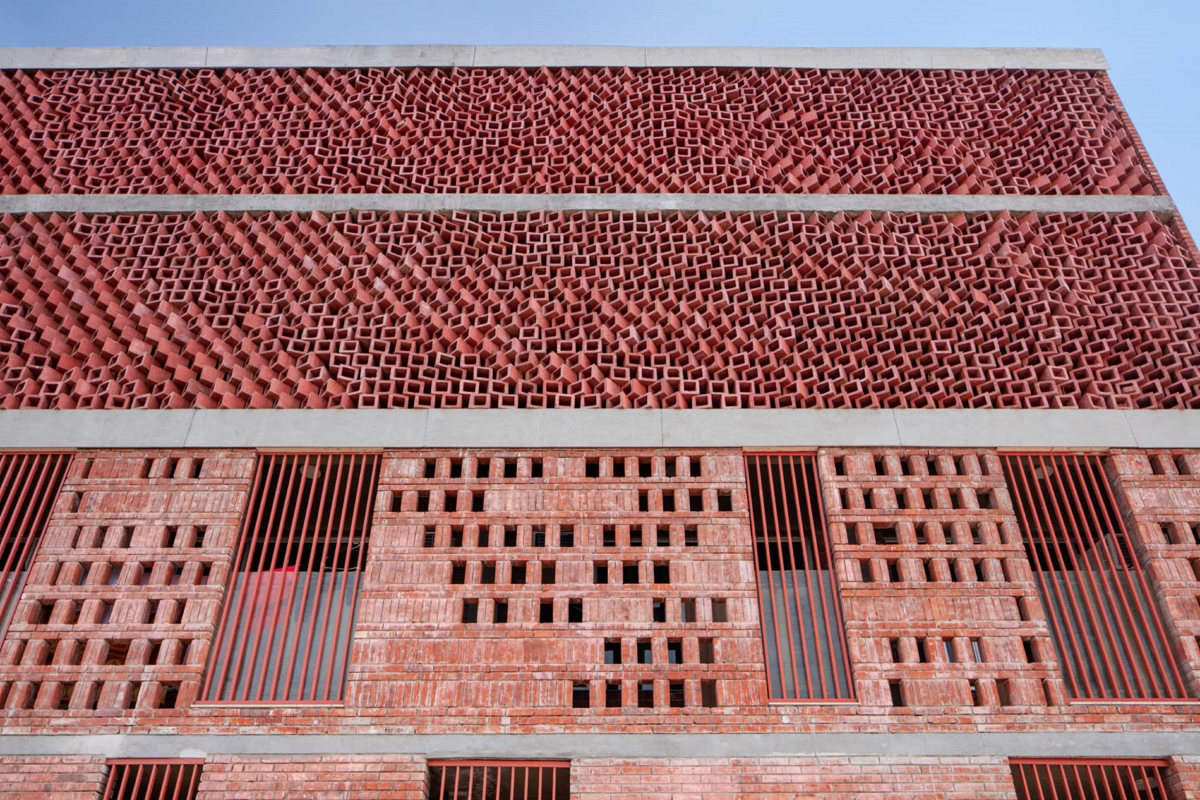 Rastogi: With limited space available along the northern façade of the hostel, a double-skin façade has been developed with the intention of creating a semi-permeable layer that would help create shade and regulate the temperature between the exterior and interior environments via a controlled airflow. The double-skin façade acts as thermal mass, reducing the incidences of direct and diffused radiation by 70% on the principal façade, thus, minimising heat gain within the habitable spaces behind the block wall. This further reduced themechanical cooling loads by 35%, a marked increment from the ECBC (Energy Conservation Building Code) base case of public buildings.

Bang: What did you change or develop in the double-skin compared to that on the Boys Hostel Block?

Rastogi: The parametric screen takes cues from the previously developed façade that spanned the adjacent Boys Hostel Block within the institute. The Boys Hostel Block’s façade was designed as an envelope in which the rotational angles of the brick were calculated in order to block diffused and direct radiation. However, it​ became evident that the depth of the brick when rotated, was not able to create a deep enclosure to cut off diffused radiation in the required manner. As such, on the Girls Hostel Block, the exterior façade screen uses hollow pigmented concrete blocks to resemble the colour of the red brick. The blocks have been successful in addressing three concerns. Not only do they provide adequate thermal mass to absorb the heat, but with a depth of eight inches, the direct radiation has to penetrate through several layers within the block and is reflected on different surfaces multiple times before entering the interiors reducing glare. In addition, since the block is penetrable, the air volume passing through this mass loses its heat through compression on the basis of Bernoulli’s principle. The blocks are also slightly rotated at a specific angle based on the insulation analysis with respect to solar heat gain. The interior second skin provides a volume where the user can step out to a shaded environment such as a balcony or court. It is a space that prioritises thermal comfort through the adaptive behaviour of the building and enables functionality.

Bang: How did you secure structural safety in the freestanding façade of masonry structure?

Rastogi: The building’s materialisation in concrete and brickwork binds the different floors together. The columns are round in shape to enhance visual appearance as well as physicality. Moreover, instead of employing singular columns, the sheer mass is broken down into three columns to form a tripod-like configuration to provide better structural stability as a vertical support.The free-standing façade was to be constructed at a thirty feet distance from the building, spanning a height of three floors keeping in mind structural integrity and earthquake resistance. This was brought to life through an extensive scaffolding and casting process.​ 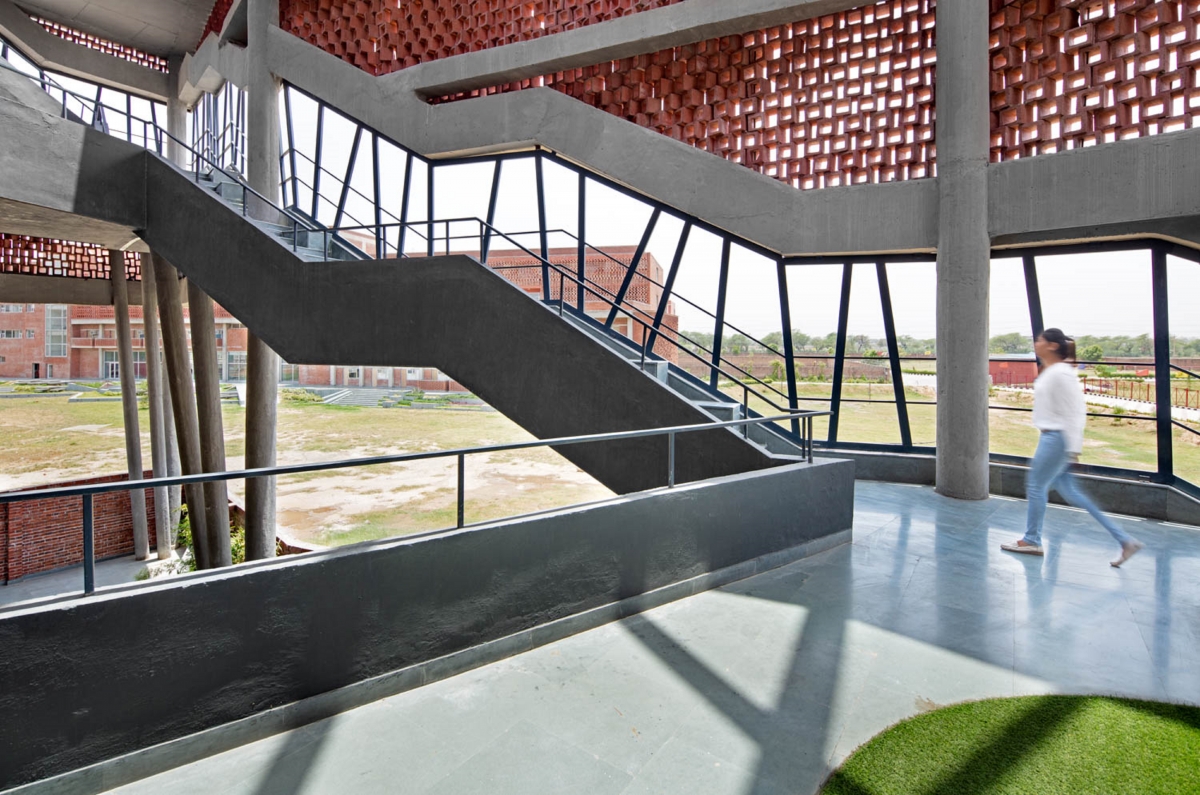 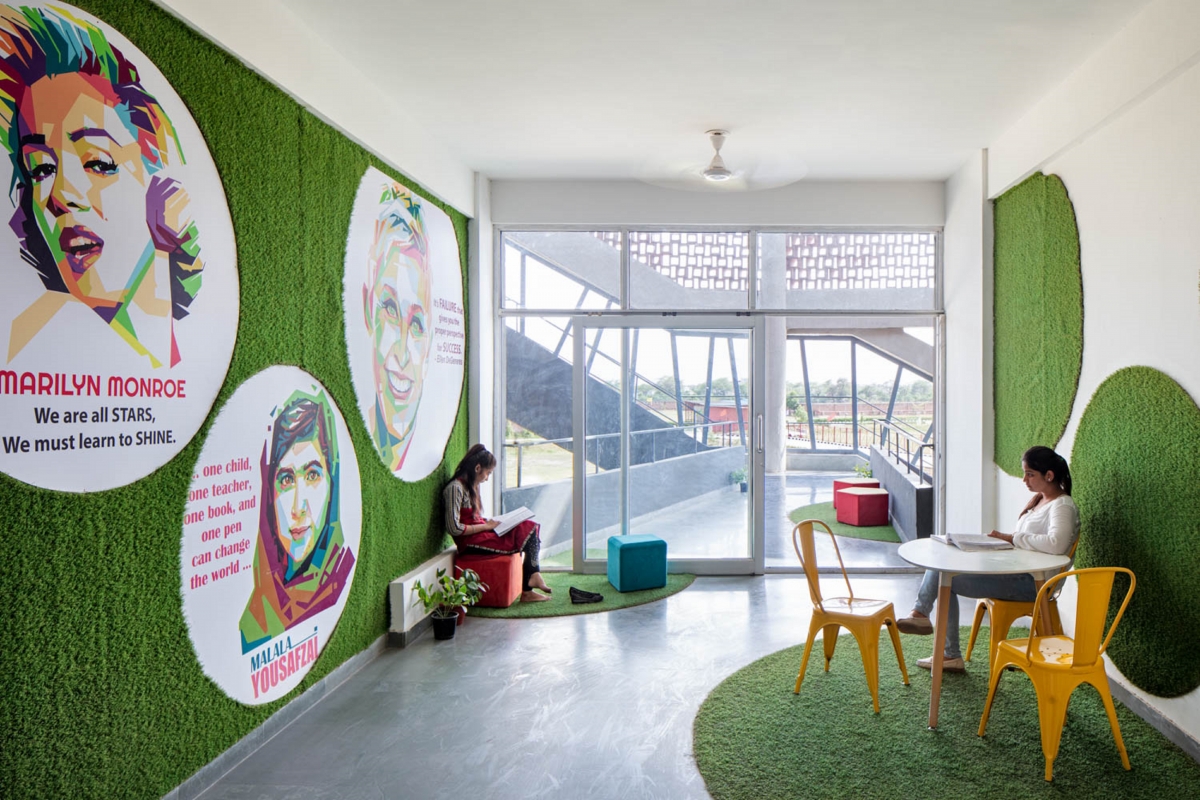 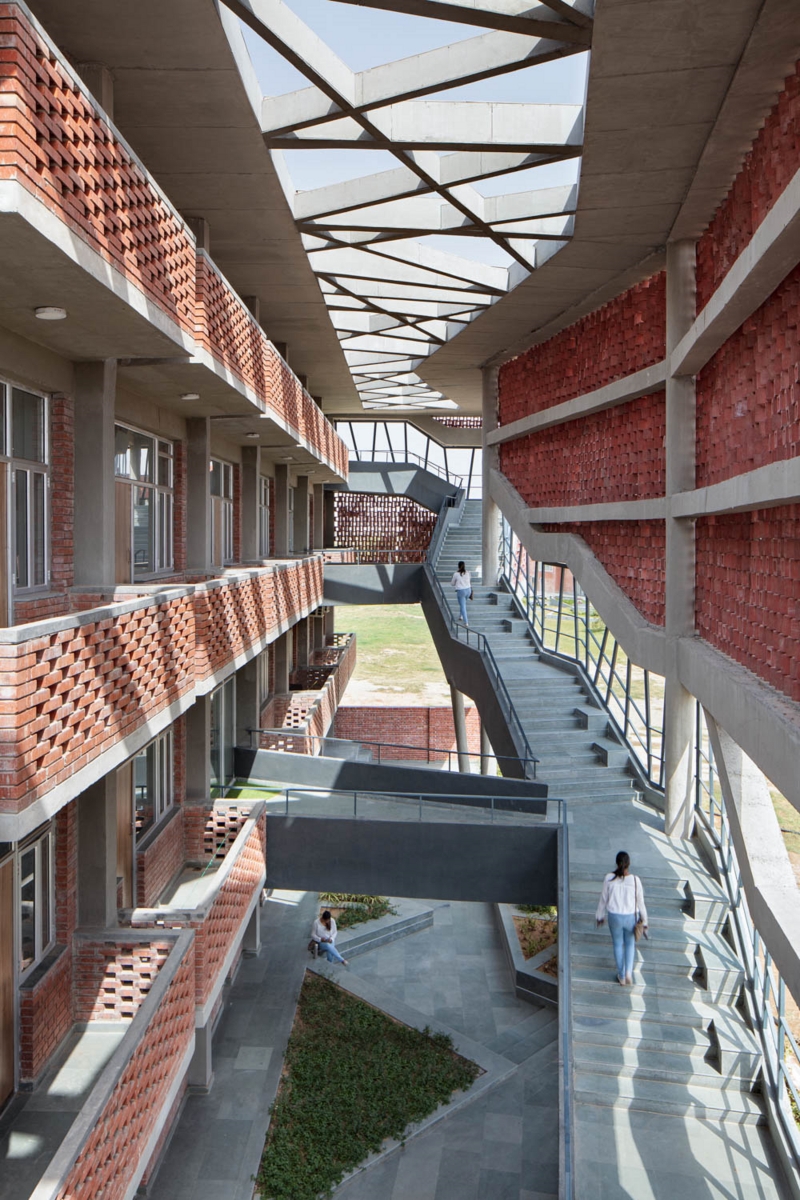 Sachin Rastogi
Sachin Rastogi is the founding director and a co-principal of Zero Energy Design Lab (ZED Lab), a research-driven architecture and interior design studio based in Delhi, India that specialises in net-zero energy buildings. He holds a bachelor’s degree in architecture from the School of Planning and Architecture, New Delhi, and a Masters in Science in Sustainable Environmental Design from the Architectural Association (AA) School of Architecture, London. He has established strong collaborative bonds with leading international practices, based on ten years of combined international experience in Europe, the Middle East and New Zealand. After returning to Delhi, he established ZED Lab with Payal Seth Rastogi in 2009. Inspired by Indian vernacular architecture, he presents works that focus on minimising the consumption of resources and human experience. In 2019, he won the first prize under the architecture category at the Young Architects Award by Indian Architect and Builder (IA&B), the second prize at the Delhi Architecture Festival, 2017.
No. 645 Aug. 2021 St. Andrews Institute of Technology and Management Zero Energy Design Lab India Sachin Rastogi domitory hostel zero energy birck concrete block sustanability
LIST
bookmark_border
favorite_border
4